If I Could Turn Back Time


In December, after having some tests done in hopes of determining the cause of stomach issues I had been having the past year, I was diagnosed with Celiac disease (if you're in England or Australia it's spelled Coeliac).  I had always thought if you were celiac, you had severe reactions to eating gluten, but according to my doctor, there is range in the severity of symptoms, and fortunately, mine are relatively mild compared to those of other people I know who have the disease.  My doctor's advice after giving me the news was "stop eating gluten".  Sounds simple, but it is much easier said than done - the damn stuff is in so many things!  It has required a huge change in my shopping and eating habits.  This alone would have been challenging but at the end of December I got sick with a respiratory virus which hung on for over 4 weeks.  Between avoiding gluten and being sick, I didn't eat much for about 4 weeks, and was generally weak and exhausted.

The Good News!  The coughing has pretty much stopped, and I'm learning to make simple meals at home that I can eat (my repertoire is pretty minimal, so if you have any gluten-free meal recipes that don't require a lot of ingredients or prep time, please pass them on - I do eat meat)

That was the day that my best pal Heather and I went to Toronto to jointly celebrate our birthdays, and we had a big day planned.    Our first stop was at Sephora, where we purchased some false eyelashes and had one of their makeup artists apply them for us.  After all, we had tickets to see the Queen of Glam herself that night... 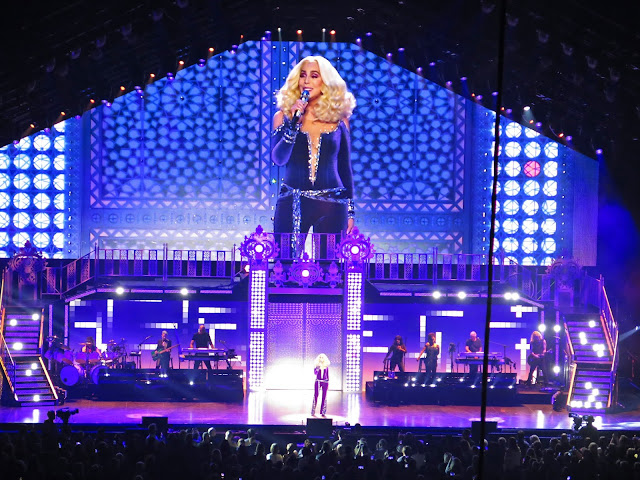 Yep, that would be Cher 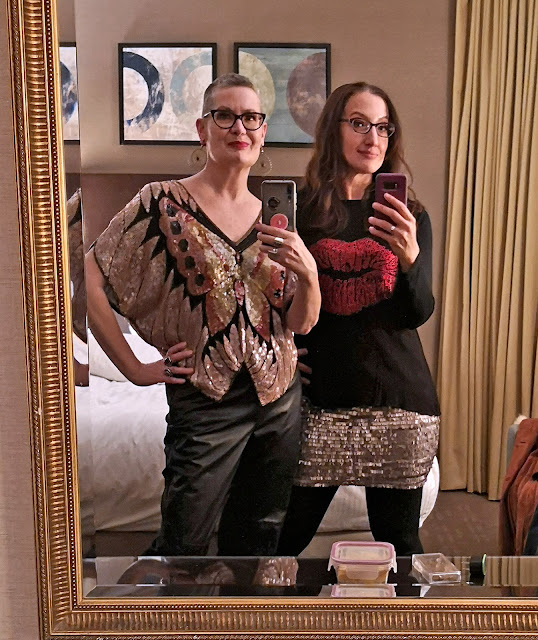 We put on ALL the sequins! (my sequinned butterfly top is vintage)

I have loved Cher since the early 70's when I sat on my living room floor watching the Sonny and Cher show with my parents.  I loved everything about her - her exotic beauty, the flashy, body-revealing Bob Mackie costumes, and her quick wit, especially when trading quips with her then-husband, Sonny Bono.  She was everything I was not, but wanted to be. I bought every movie magazine with her on the cover, and one of the first record albums I bought with my own money was 1974's Dark Lady (I was 13), with a black and white photo of her on the cover holding a black cat.

Time went by and I grew up, but Cher stayed in my heart and on my radar.  I knew what songs she had released and what movies she made.  I followed the story of her daughter Chastity's coming out as gay, and later on, as transgender.   One of the few regrets I had in my life was that I had never seen her perform live, so when I saw on Instagram that she was going to be performing in Toronto as part of her "Here We Go Again" tour in 2019,  I spent a ridiculous amount of money (lesson learned - if you buy tickets from a re-sale website be prepared to pay insanely high service fees) on two tickets for Heather and I to see her.  I bought the tickets in April so we had to wait until November before we could actually go - it was like waiting for Christmas when I was a kid. 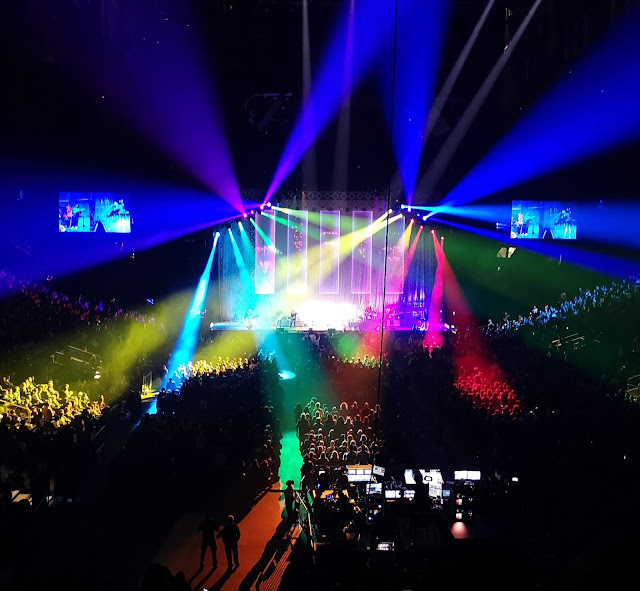 The opening act was Nile Rogers and Chic


Nile Rogers, co-founder of the band Chic, is an American guitarist, singer-songwriter, record producer, arranger and composer.  He has written and produced music for artists such as Diana Ross, Madonna, David Bowie, Sister Sledge and Duran Duran, and is a member of the Rock and Roll Hall of Fame.  We were almost as excited to see him perform as we were to see Cher. 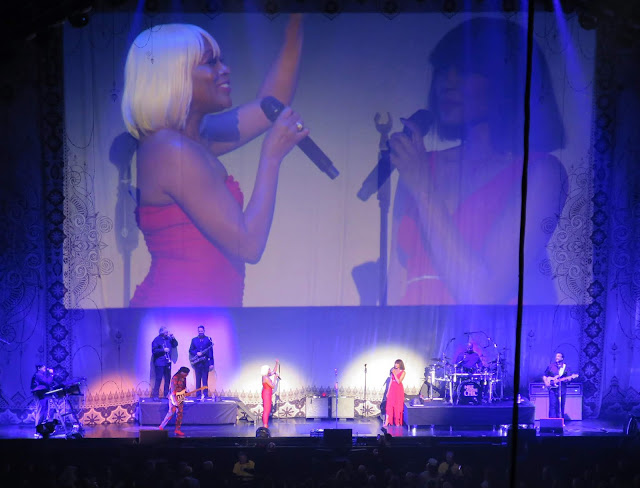 While Chic were on stage, the arena took on the vibe of a funky disco club, and we wished we were on the floor so we could dance.   It was really cool to look around us and see so many women in their 50's and older dancing in their seats.  I was disappointed that more people did not bother to dress up; we saw a few people in sequins and bling, and one young couple dressed in 60's Sonny and Cher outfits, but for the most part, it was hard to tell people were going to a concert and not a hockey game.  Sigh. 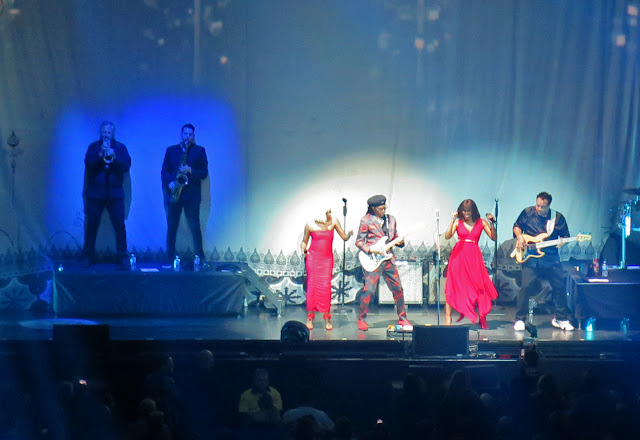 
Then, the woman we were all waiting for... 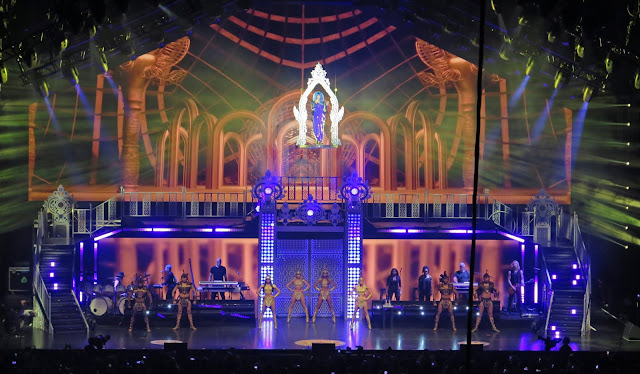 of course she was lowered onto the stage in a gold archway, because Cher 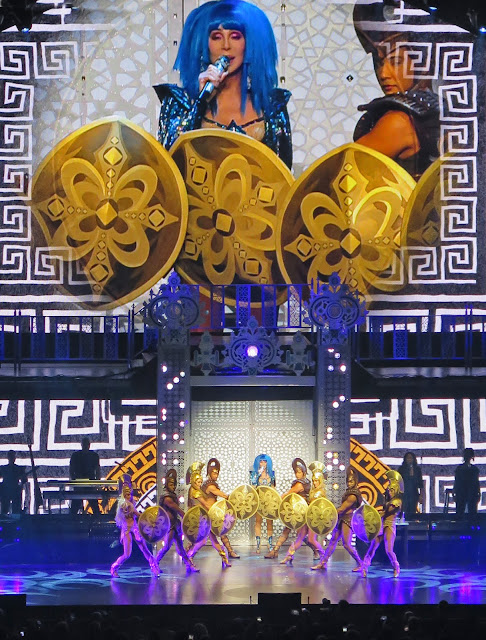 For the next hour and a half she showed us that at 73, Cher is still a performer at the top of her game.   Her voice is in fine form, and I think she sounds better than she did 20 years ago.  Bob Mackie's form-fitting costumes showed off a kick-ass body that must take some hard-core workouts to maintain (plastic surgery can only do so much).  There were 9 costume changes for 14 songs which meant that she disappeared from the stage frequently, while we were left to watch a video montage or listen to an instrumental version of one of her songs. I would have liked more songs and less filler, but honestly, I was just thrilled to finally see her "in the flesh" (and there was quite a bit on display). 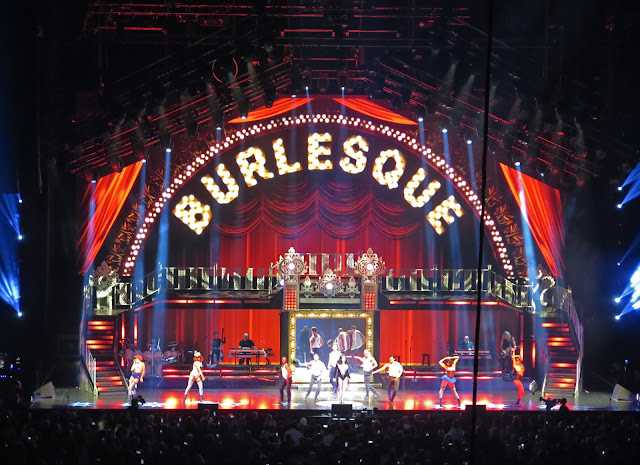 For the "Burlesque" set she wore the same costume as she did in the film.   The sets were effective and eye-catching and were done mostly with projections and lighting 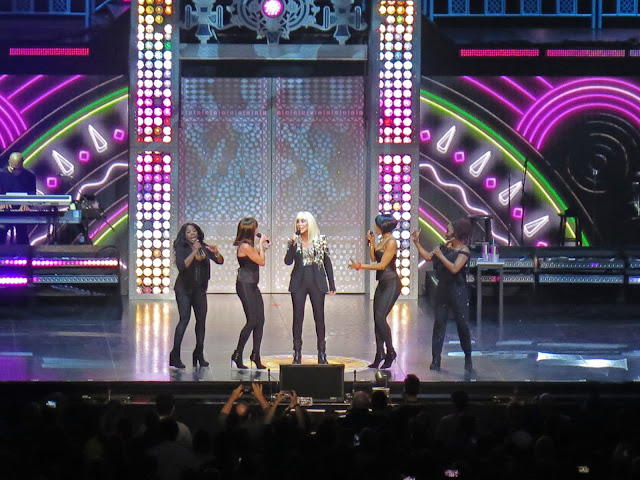 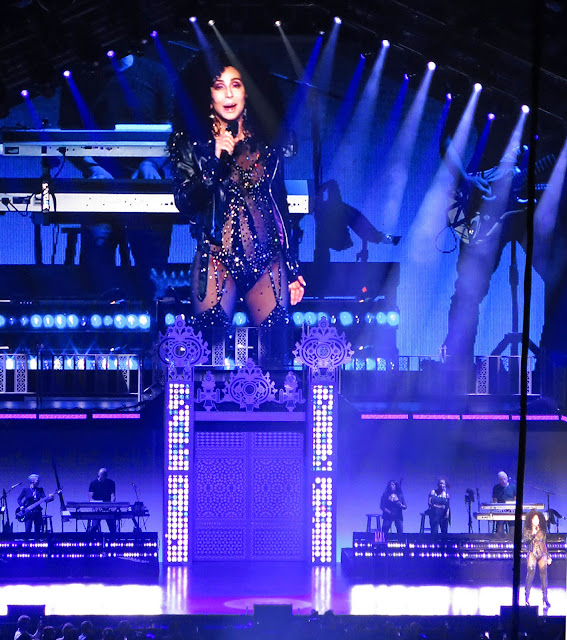 She doesn't need to turn back time, she looks incredible now

I wish I would have got a better photo of her during her performance of "If I Could Turn Back Time" when she was wearing a mesh bodysuit very similar to the one she wore in her video for song from back in 1989.  When she came out on stage the audience went nuts. 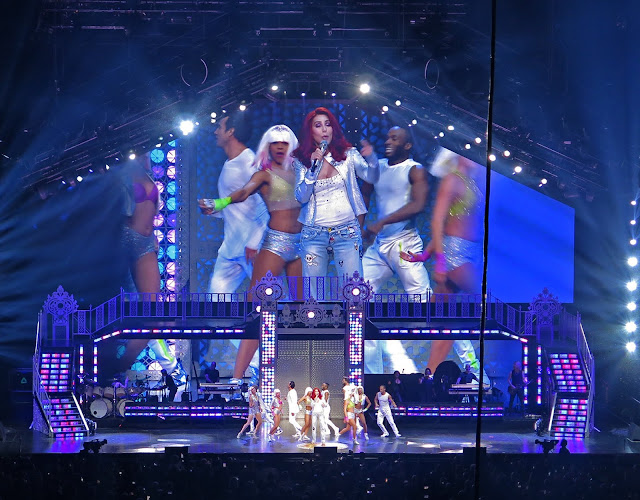 She has ended every concert on this tour with "Believe"

I waited in line to visit the merchandise table after the show - I attend concerts so rarely that I made sure that I had the full experience.   I spent too much money on a long-sleeved t-shirt and a copy of the program but I was more than satisfied with our night out.   If you love Cher and weren't able to see her on this tour, there are plenty of videos from the various concert stops on Instagram and YouTube to enjoy.