The Manhattan Vintage Show - What Keeps Me Coming Back

I first attended the Manhattan Vintage show in 2011 when I went to New York to celebrate my 50th birthday.  I had seen photos from the show on the Idiosyncratic Fashionista's blog, and the idea of seeing so many beautiful vintage pieces in one place sounded like my idea of heaven.  Since 1992 the show has been a source for high-end vintage from 80 - 90 vendors from all over the United States.  It attracts designers looking for inspiration, hard-core vintage fans, and others who are looking for a statement piece for a special occasion.  You never know who you might see at the show - I've spotted Hamish Bowles, Lynn Yeager, Lea Delaria, and Bette Midler over the years.

After attending the fall show for several years in a row, I skipped a couple of years, and realized I missed the chats with the vendors and fellow vintage fans, so I made a point of scheduling my trip to coincide with this year's fall show.    I've written about the show several times, and many of the vendors recognize me, so it felt a bit like old home week when I walked in the show and immediate saw Justine at the Hollywood and Vine booth.  She was wearing a dress by American designer Claire McCardell that she was debating about purchasing. 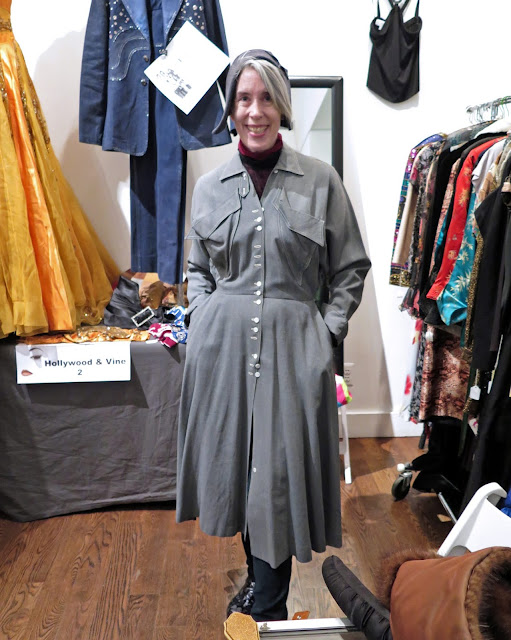 Justine, in the Claire McCardell dress she ended up buying 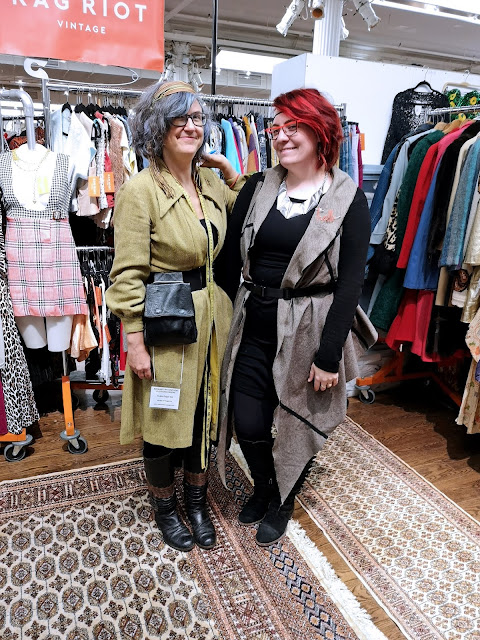 I had followed House of Edgertor on Instagram for quite a while, so it was nice to meet Robin, the face behind the shop.  It was her first time as a vendor at the show.  Rag Riot Vintage, owned by Robin's friend Kat, (right) shared the booth with her. 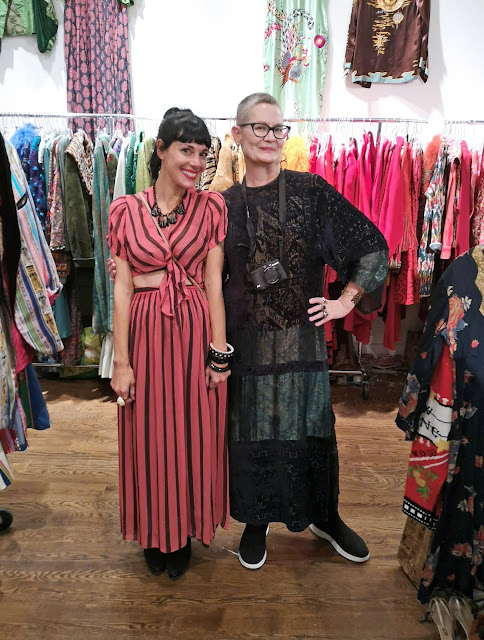 I always look forward to re-connecting with Meika, owner of Another Man's Treasure.  Meika and her family have recently re-located to Los Angeles, and I was interested to hear how she was adjusting to West Coast life. 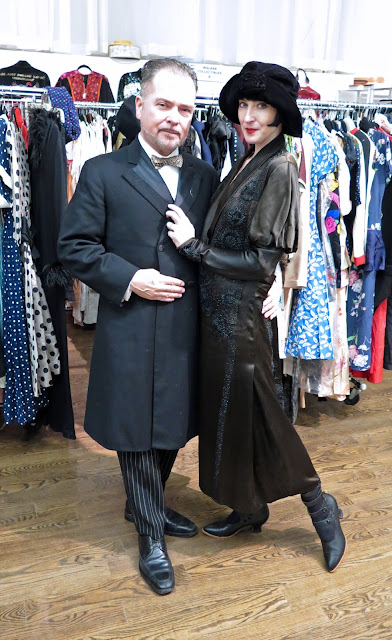 Dr. Colleen Darnell, aka the Vintage Egyptologist, and her partner John were easily the best dressed couple I saw when I was at the show.  I've since started following her on Instagram, and her posts are a winning combination of exquisitely styled vintage gowns and fascinating facts about Egyptian history. 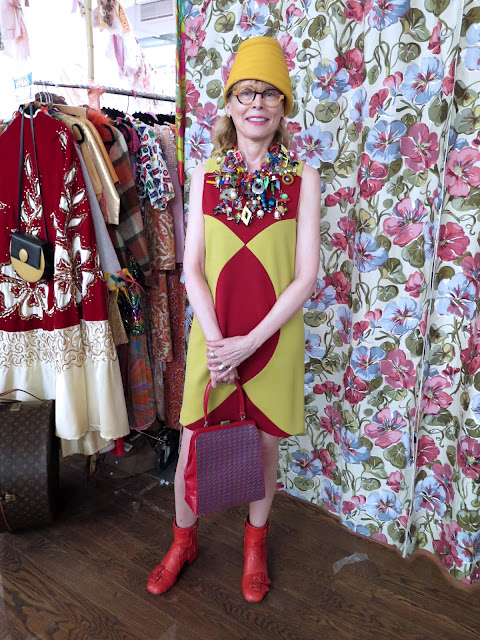 I spotted this woman from quite a distance away (how could you not?) and I wanted to know more about her.  Her name is Apryl Miller, and she's an artist who creates bold and colourful installations, collages, paintings and sculptures that have been showcased on MTV,  HGTV, and in national and international publications.  The necklace she's wearing is one of her pieces. 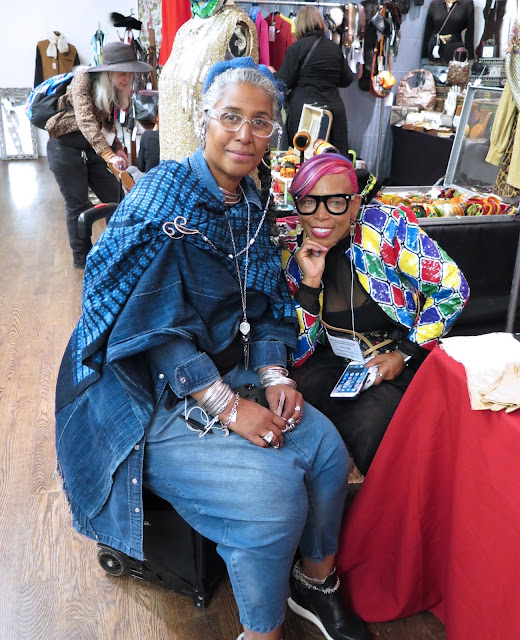 Earlier in the day, the woman on the left had stopped to talk to Valerie, and I was totally enthralled by her multi-layered denim outfit and silver jewellery.  When I saw her visiting with her friend Vivian Hill (aka 'Lady V', Life Coach and Vintage dealer), at Hill's booth, I took the opportunity to ask them for a photo. 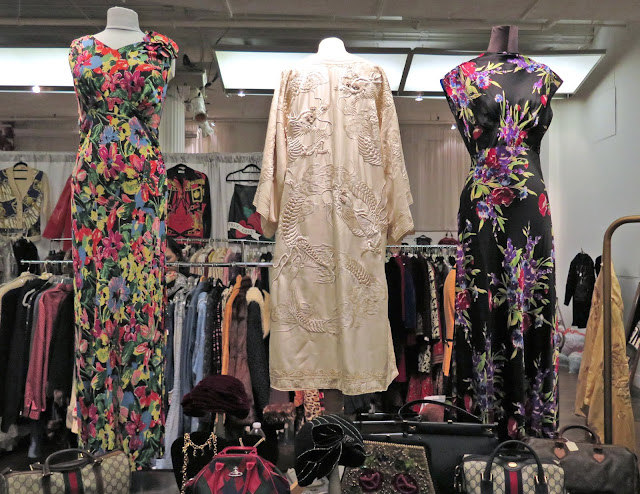 I've featured displays from Lisa Victoria Vintage in many of my previous posts about the Vintage Show and for good reason - she always has some of the most beautiful pieces in the show at her booth.   Case in point - look at the detail (see below) in the cream embroidered robe between the two 1930's dresses in the above display. 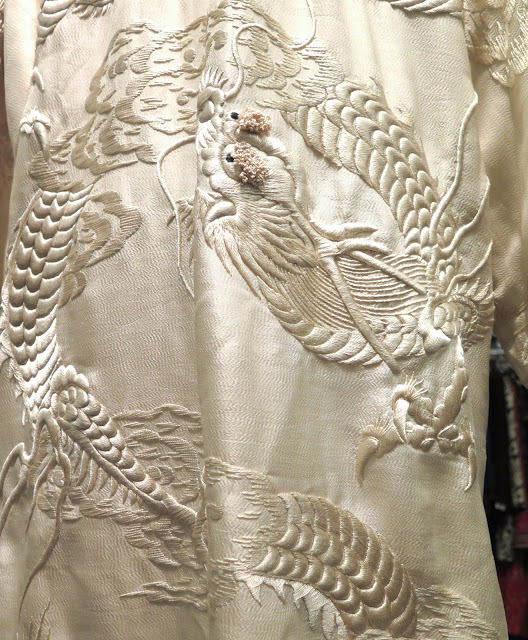 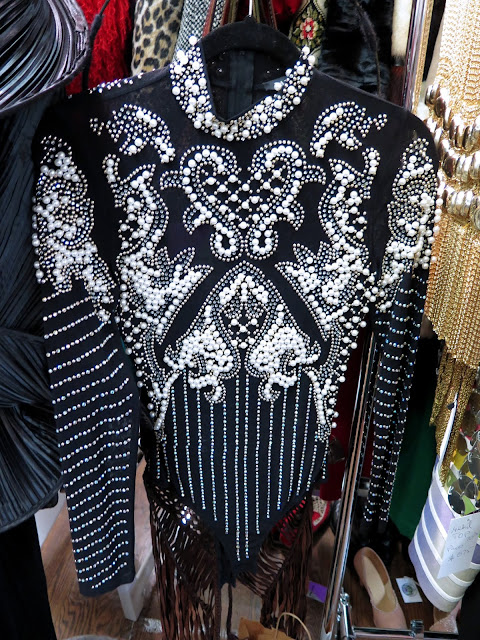 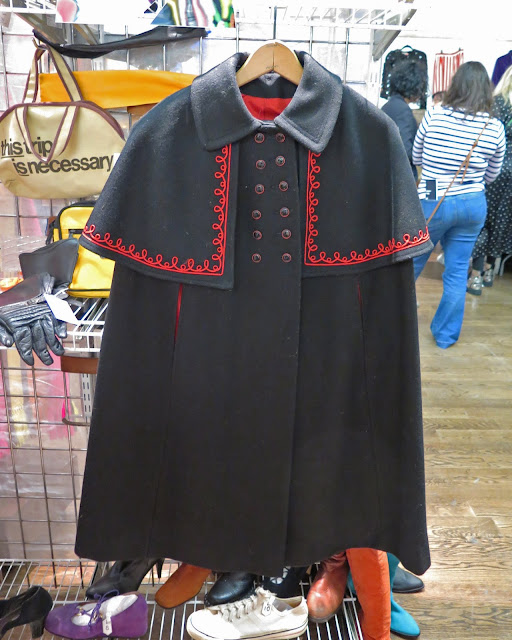 Rag Riot has some beautiful capes in their booth, including this one 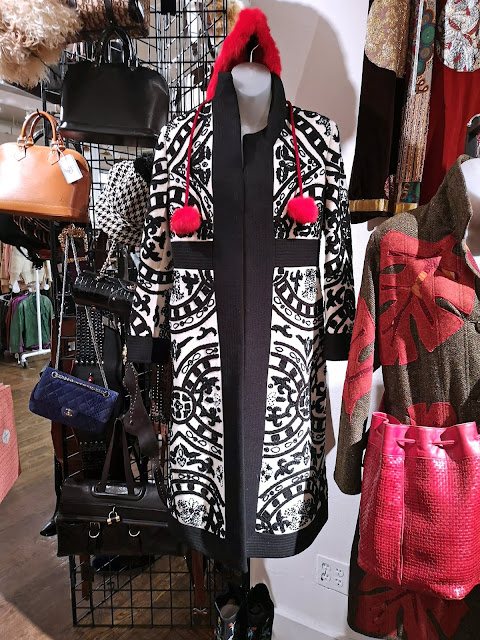 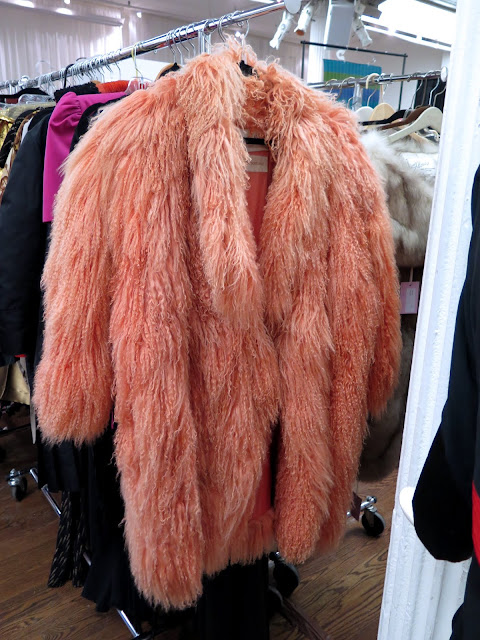 Each show features a special exhibit that focuses on a specific theme or designer, and for this show, the spotlight was on Claude Montana, cult figure, and one of the most celebrated designers of the 1980's.  Regina, owner of Vintage Le Monde had one of Montana's perfectly peachy mongolian lamb coats in her booth. 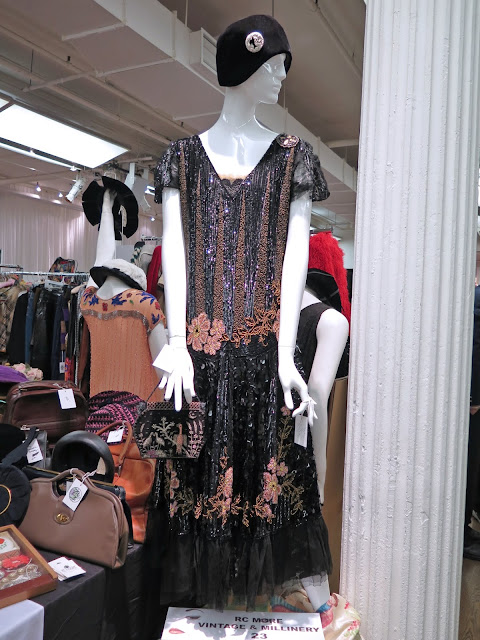 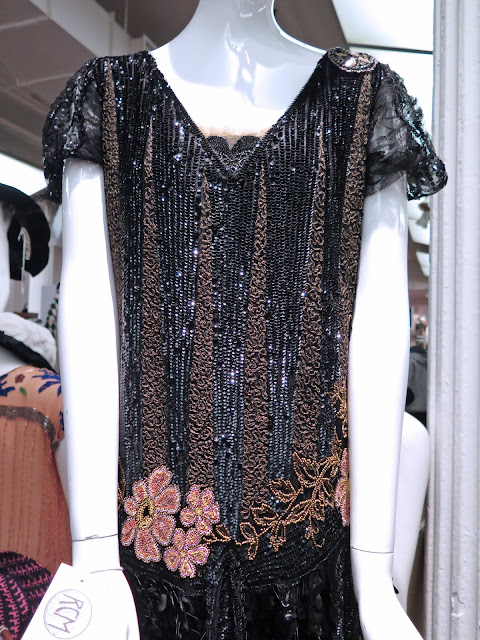 Just look at that beading! 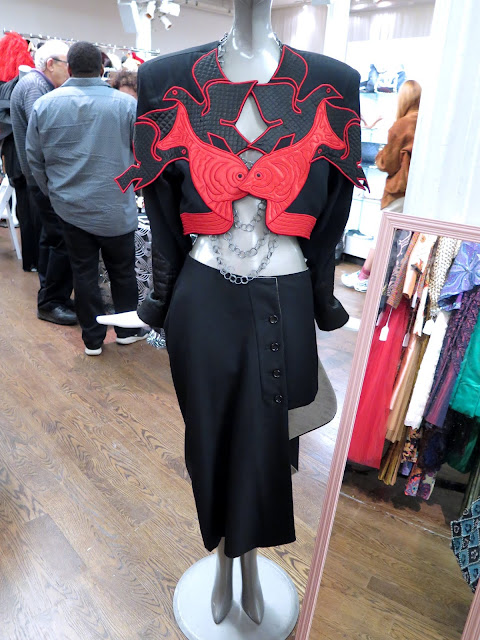 The next Manhattan Vintage Show will be held January 31st and February 1st, 2020
at the Metropolitan Pavilion, 125 West 18th St., New York, NY
Posted by Forest City Fashionista at 9:26 PM