Hail To The Queen (of CanLIt) 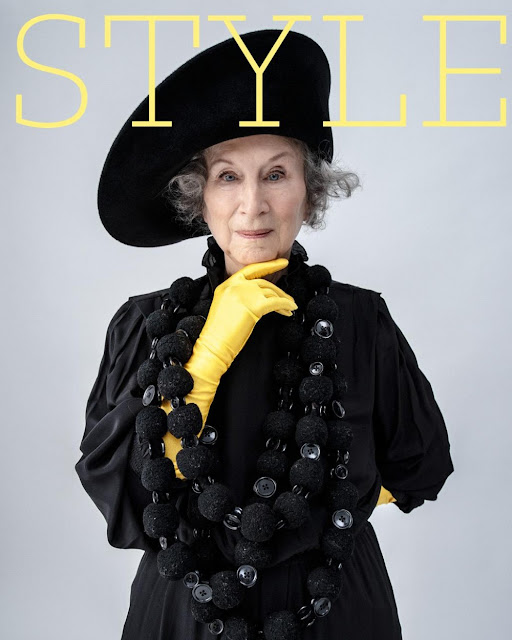 Canadian author Margaret Atwood is everywhere these days, including the New York Times, and the Sunday Times (UK), which featured the fabulous photo above.  The publication of her 17th novel, The Testaments,  a sequel to her 1985 dystopian bestseller, The Handmaid's Tale, has made her the current media darling.   Never mind that she's also written 15 other novels, 8 books of short fiction, 15 books of poetry, 10 works of non-fiction, 2 graphic novels and 7 books for children.

When I was in high school, I was fortunate enough to have an amazing English teacher, Mrs. Tiffin, who believed that Canadian writers were every bit as talented and engaging, if not as famous, as those from the United States.   Mrs. Tiffin had been Alice Munro's English teacher, (another much-loved and lauded Canadian author) when Munro attended the same high school in Wingham, Ontario, 30 years before me.  It was in Mrs. Tiffin's class that we were introduced to the writing of Margaret Lawrence, Timothy Findley, and Margaret Atwood.  Because I enjoyed English class the most of all my courses, and did well in it, I decided to make it my degree major when I attended University.  There I was able to take a class that focused on Canadian literature, and I remember discovering Margaret Atwood's poetry, including "The Journals of Susanna Moodie".  The poem that made the biggest impression on me is probably her shortest, but says everything about Atwood's wit and sensibility in only 4 lines:


you fit into me
like a hook into an eye

a fish hook
an open eye

It is still a favourite of mine, and for the early part of my adult life, pretty much summed up how I felt about relationships.

I discovered a love for the writings of other Canadian authors, such as Robertson Davies, Timothy Findley and the aforementioned Alice Munro, whose works still hold a place of honour on my bookshelves.  But I had never read a voice like Margaret Atwood's before.  "The Edible Woman" may not have been the easiest choice for my introduction to Atwood's novels; it was certainly one of the strangest books I had read up until that point in my life, but I was immediately drawn to the dark humour and surreal plotline.  As a budding young feminist, I liked that she centered her narratives around female characters who were trying to figure out their place in the world, and in their relationships with men, which was basically what I was trying to do at that point in my life. 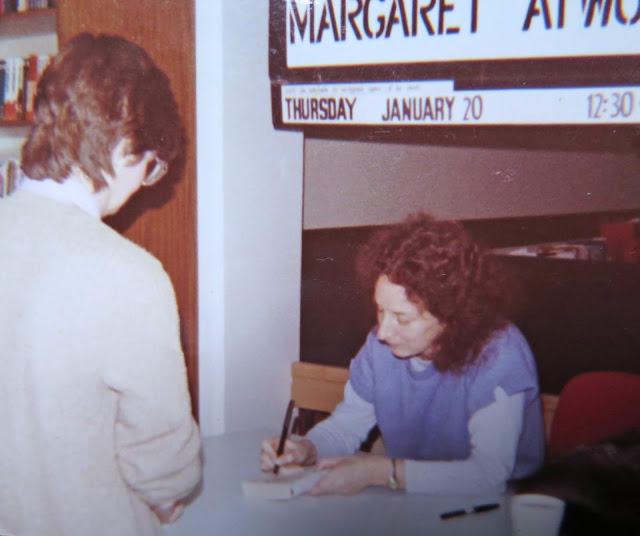 That is indeed me in the photo above, wearing a beige sweater (!!??), getting my copy of Lady Oracle signed by Ms. Atwood when she visited Western University in the early 80's.

As I read more of Atwood's novels, my admiration of her grew and I became a true fangirl.   On one visit to Toronto in the 1980's, as I was walking down Queen Street West (which was the hip hangout for musicians, writers and other artists back then) and I spied  Atwood sitting at a table through the window of Le Select Bistro.  I wasn't planning on having lunch, but I marched right in there and got a table close to hers from where I proceeded to eavesdrop on her conversation while trying not to stare at her too much.  Unfortunately, I couldn't hear much of the conversation she was having with her lunch companion, but just being in such close proximity with one of my favourite authors was thrill enough.

At one point I have owned almost every book she has written, but through several purges of my bookshelf, I've whittled my collection down to the ones below. 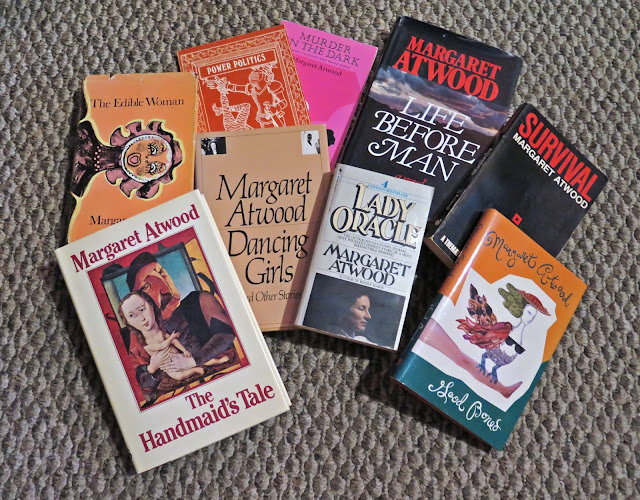 I still have my pristine, first edition copy of The Handmaid's Tale, given to me as a gift by my then room mate.   In 1985 when it was published, critics reviews were mixed.   New York Times book critic Christopher Lehmann-Haupt wrote the following:

"...it is a political tract deploring nuclear energy, environmental waste, and antifeminist attitudes
But it so much more than that - a taut thriller, a psychological study, a play on words. It has a sense of humor about itself, as well as an ambivalence toward even its worst villains, who aren't revealed as such until the very end. Best of all, it holds out the possibility of redemption. After all, the Handmaid is also a writer. She has written this book. She may have survived"

But it was also dismissed as "undistinguished" and "ordinary" in the same newspaper by writer Mary McCarthy:

“The writing of The Handmaid’s Tale is undistinguished in a double sense, ordinary if not glaringly so, but also indistinguishable from what one supposes would be Margaret Atwood’s normal way of expressing herself in the circumstances. This is a serious defect, unpardonable maybe for the genre: a future that has no language invented for it lacks a personality. That must be why, collectively, it is powerless to scare.”

Since that time The Handmaid's Tale has become a frequently studied classic of dystopian fiction, and in the era of Trump it has taken on a new cultural resonance.  It has been made into a film, and in 2017 was adapted into a Hulu series starring Elizabeth Moss as the Handmaid Offred.  And now, Atwood has published a sequel, titled, The Testaments.

What a difference 35 years make; the release of The Testaments was a literary event.  Atwood launched the book with a sold-out live event at London’s National Theater that was broadcast at around 1,000 cinemas around the world.  Fans lined up for blocks at the midnight of its release, the reviews have been uniformly positive, interviews with Atwood have appeared in every major media outlet (including a fantastic photo shoot with legendary British fashion photographer Tim Walker for the Sunday Times) and the novel has been shortlisted for the Booker Prize.  On a sad note, Ms. Atwood's longtime partner, author Graeme Gibson, passed away while accompanying Atwood on her current book tour.

Personally, I'm thrilled that Atwood is being treated like the Canadian Literary Queen she is - long may she reign. 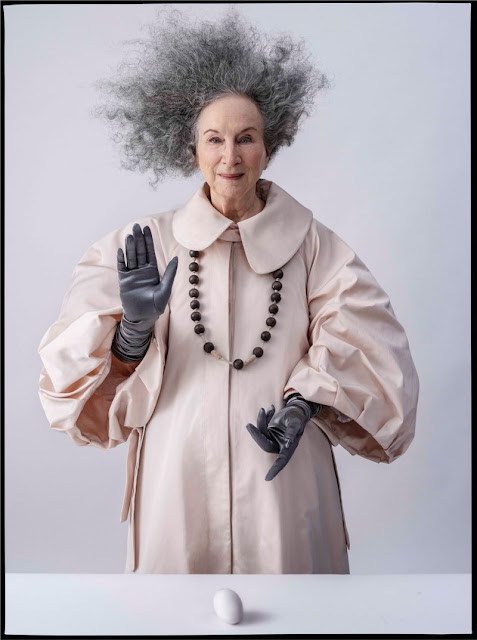