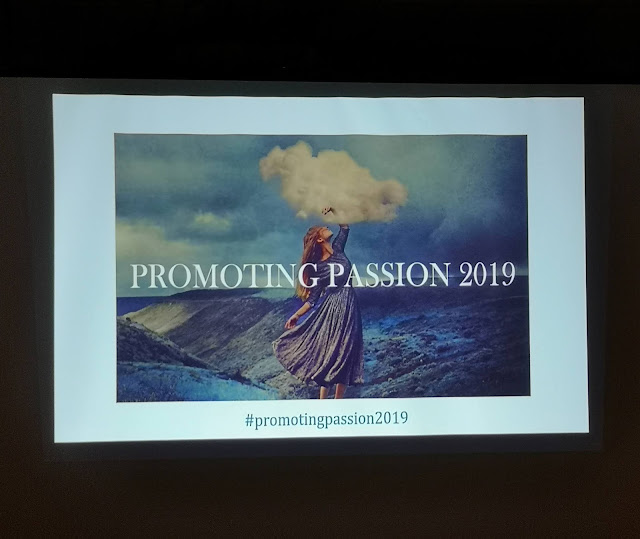 Some of you may remember that in January I participated in a two-week online creative challenge hosted by artist Brooke Shaden (you can read about it here).   I enjoyed it enough that when she advertised on her website that she was doing a Promoting Passion lecture tour, which had a stop in Vancouver during the time I would be there, I immediately signed up.  The tour was sponsored by Sony, which allowed for Shaden to set the early registration fee at a very affordable $50 (the registration fee later increased to $70). The brief description below is from the event materials:

"Focusing on intense community connection and inspiration to create more authentic and impactful art, the lecture tour will bring together artists to jumpstart their creative ambitions.  Lectures and workshops focus on how to live a passionate life by turning your passion into a career, how to create more meaningful art for yourself and others, how to find confidence in your craft, and more"

Upon first reading it sounds a bit intimidating, and I wondered if everyone else attending would be "serious" artists.  As it turned out, the majority of the 35 or so attendees were women in their 20's and 30's, and there were some for whom photography was a profession, others, a means of creative expression, and a few who didn't bring a camera with them at all.

Shaden is a warm and encouraging person, and very generous with sharing the process behind her art.  She greeted each participant with a hug, which was a lovely way to start the day.  First up were a few group exercises that were designed to take us out of our comfort zone and connect with the other people in the room.   Have you ever stood a foot apart from a stranger, facing each other, and stared into each other's eyes for a full minute?  Until that point, I hadn't, and it's definitely not easy; I had to fight the urge to look away after about 30 seconds.

This was followed by a lecture from Shaden that addressed the topic of Legacy, and what stops us from leaving a creative legacy.  If "Legacy" is the message you want to leave behind, art is the messenger.  We examined the excuses we make to ourselves (and others) for not creating, and what is the narrative we tell ourselves about our creative abilities.  There was a lot of food for thought, and it encouraged some self-reflection on what I had to offer as an artist (or creative), and what words do I use to describe myself - are they positive and kind, or do I focus on comparison and fear of failure? She encouraged us to trust that what we had to offer was worthwhile, and pointed out that "believing you are insignificant is easy, as it takes away your autonomy and responsibility".

After lunch, and a talk by accomplished sports and lifestyle photographer Erin Hogue, came the hands-on part of the day. 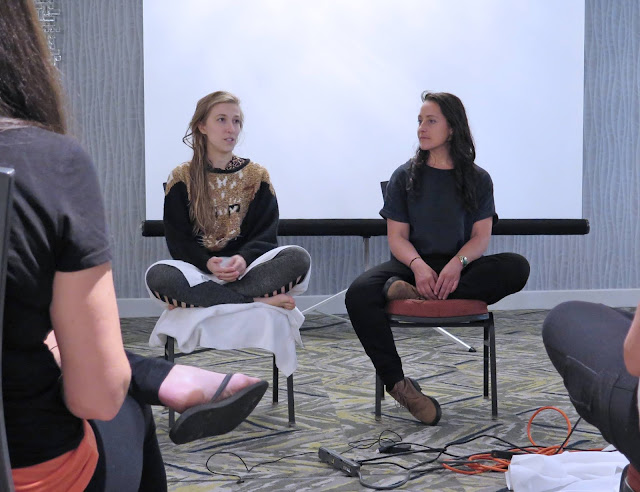 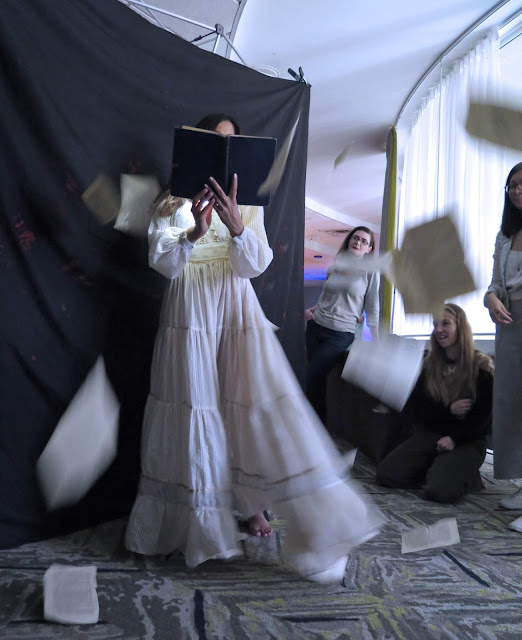 We had two models to photograph; first up was Niki (wearing the white dress above), a plain backdrop, a book, and some loose pages.   Shaden set up the original idea, and we were encouraged to give posing suggestions.  It was challenging to jockey for a good shooting position with 30 other people but in the end, after a bit of editing at home, I ended up with the two photos below... 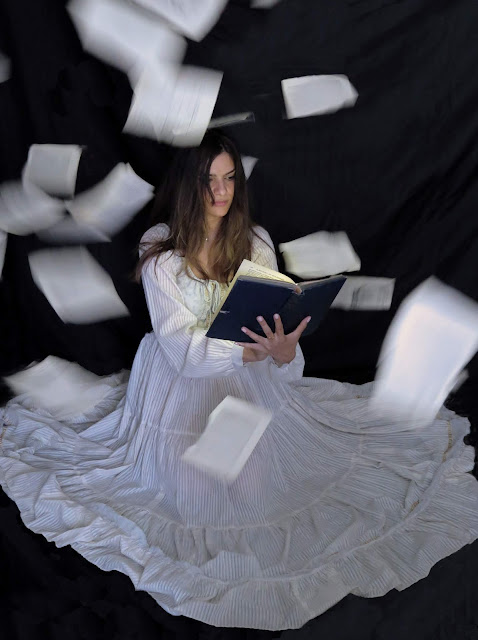 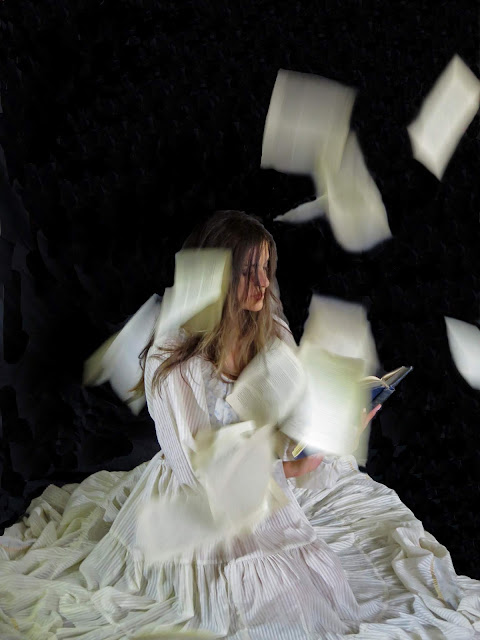 Then we moved on to the hotel pool, with model Chelsea.  Initially, Shaden got in the pool with her to hold a backdrop (you can see her head peeking out on the left), but that became unwieldy so after we all had a chance to get some shots she left Chelsea to her own devices. 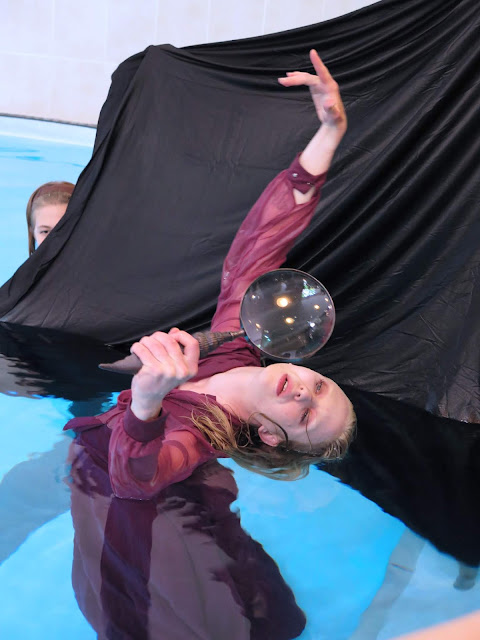 Chelsea earned major kudos from us for her patience, and excellent posing skills, especially considering she was immersed in a pool while wearing in a long dress. 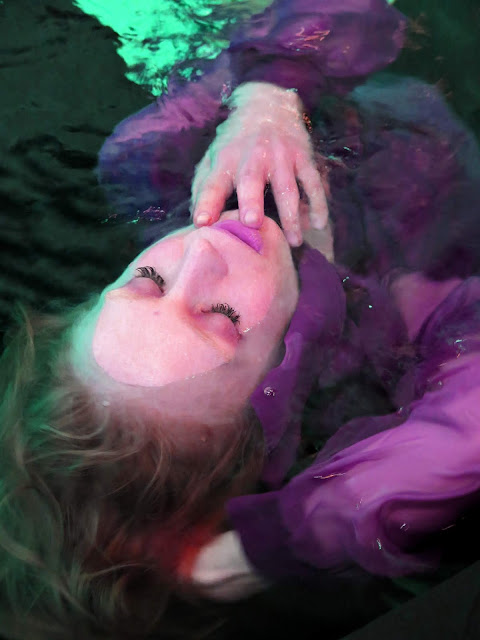 For this photo, all I did was alter the colour hue a bit 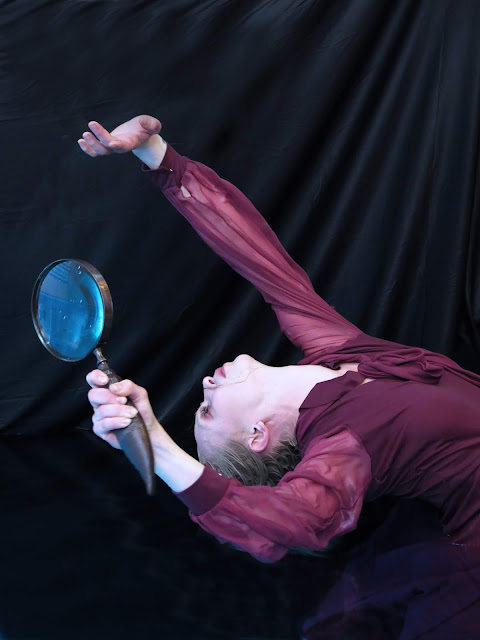 Shaden brought an old magnifying glass to use as a prop 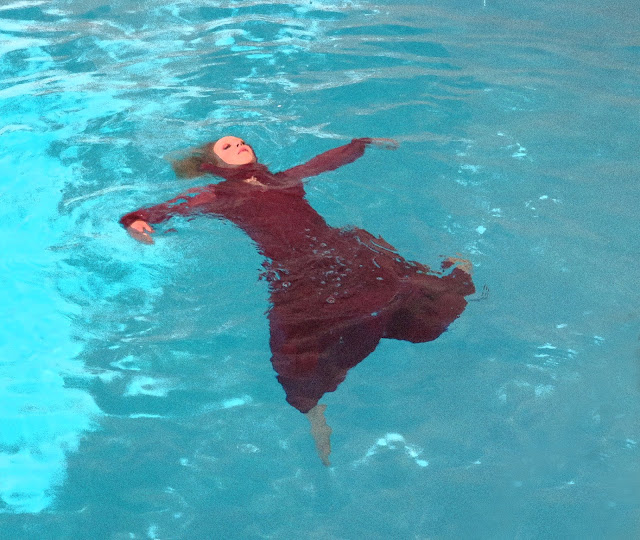 The two photos below were created using the "plastic" filter, and I liked the effect it has on the water.  It definitely made the photos look more like paintings, which I was very happy with. 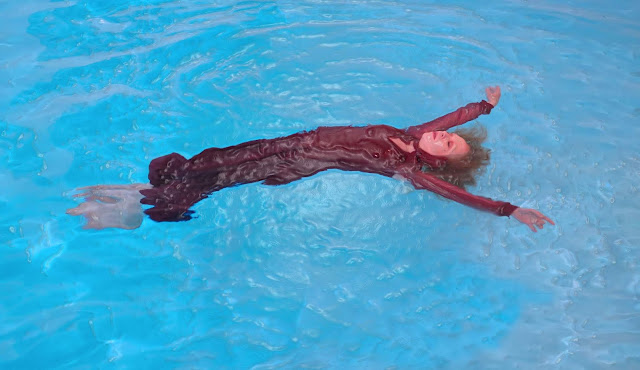 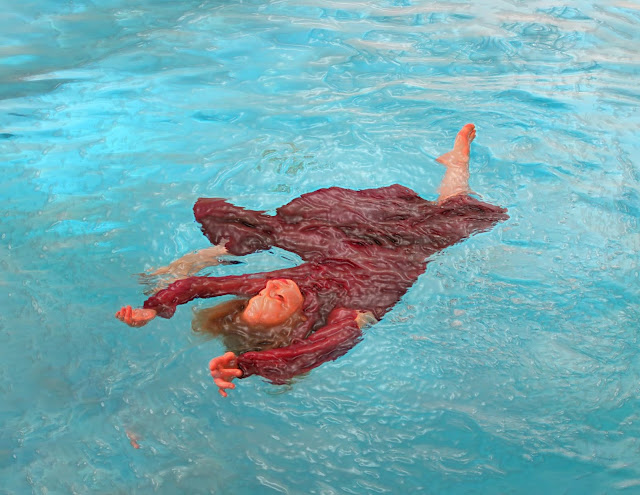 It's said that "comparison is the thief of joy" so I'm kind of glad I haven't seen anyone else's photos from the day.   Initially I had hoped the event might provide an opportunity to make some connections with other creative people, but everyone seemed focussed on their own journey and less interested in networking.  Still,  it was a creatively fulfilling and inspiring day, and I came away with some photos I liked, and feeling motivated to spend more time on creative pursuits.   With so many terrible things that are happening in the world, in addition to the stress of our own lives,  it is important to not lose touch with our creative side, whether for you that means brainstorming new ways to re-cycle the glut of plastic that is choking our planet, sewing clothing for ourselves, creating stories to entertain our children, trying a new recipe, or taking a photo of your dog.  It's the thing that feeds our soul when the outside world asks too much of us, and gives back too little.
Posted by Forest City Fashionista at 4:18 PM