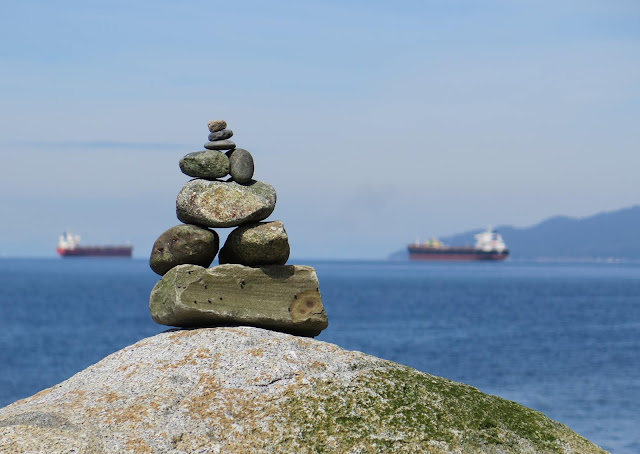 I flew back home on Wednesday from Vancouver (and boy, are my arms tired!) where I spent an absolutely lovely week enjoying the scenery, stellar weather, and inspiring company. 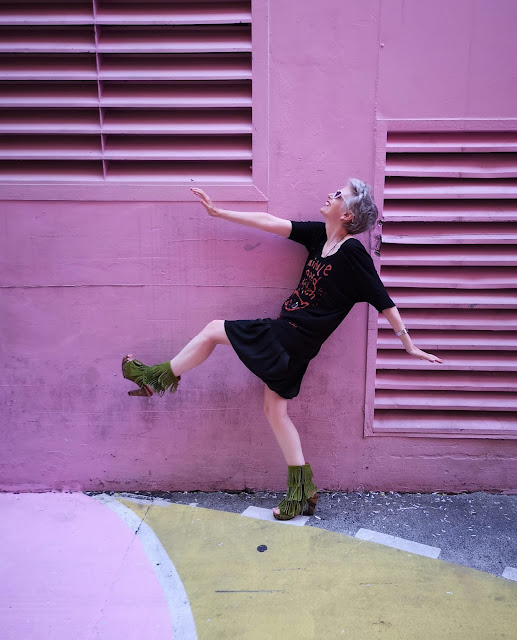 The irrepressible Melanie aka Bag and a Beret

This was my third trip to Vancouver, and the second in which I have visited with Mel.  She's funny,  inspiring, and super creative, but she also has her quiet moments too... 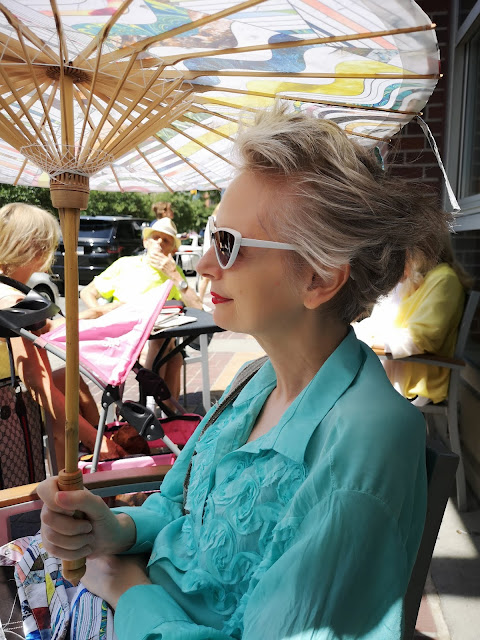 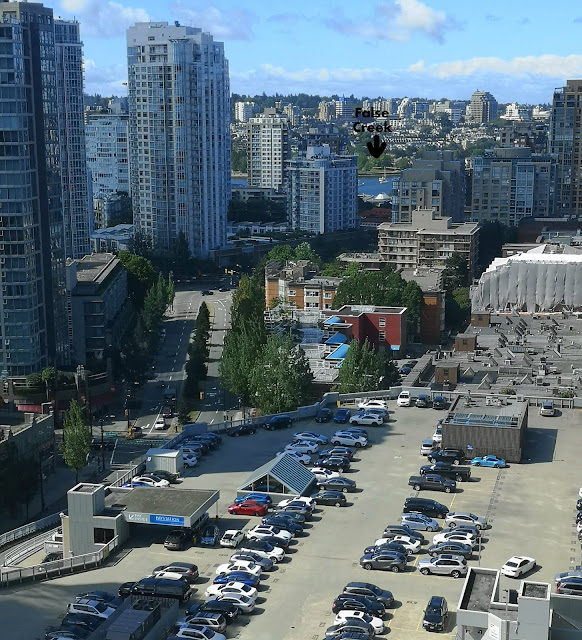 I stayed with people I met last time I was in Vancouver in the area known as Yaletown, one of the "happening" neighbourhoods according to Vancouver Tourism websites.  Formerly the western terminus for the Central Pacific Railway, its popularity grew in 1986 when Vancouver hosted the World's Fair and many of the venues were located along the north shore of False Creek (see the black arrow at the top of the photo).  The Seawall is a 10 minute walk from the apartment, and there are lots of restaurants, a grocery store, shops, and the Vancouver Art Gallery close by. 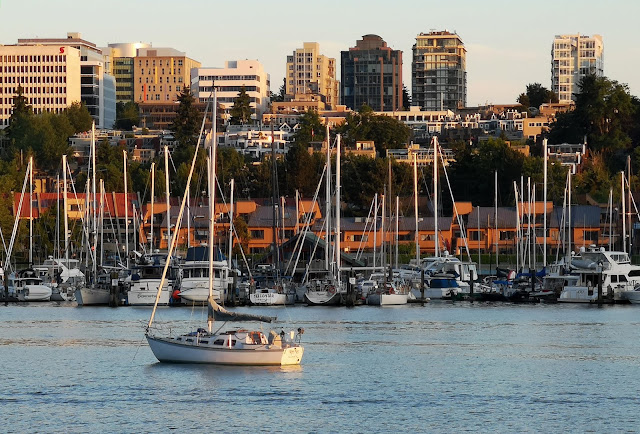 I took a walk along the seawall almost every day, and there was always something new to see 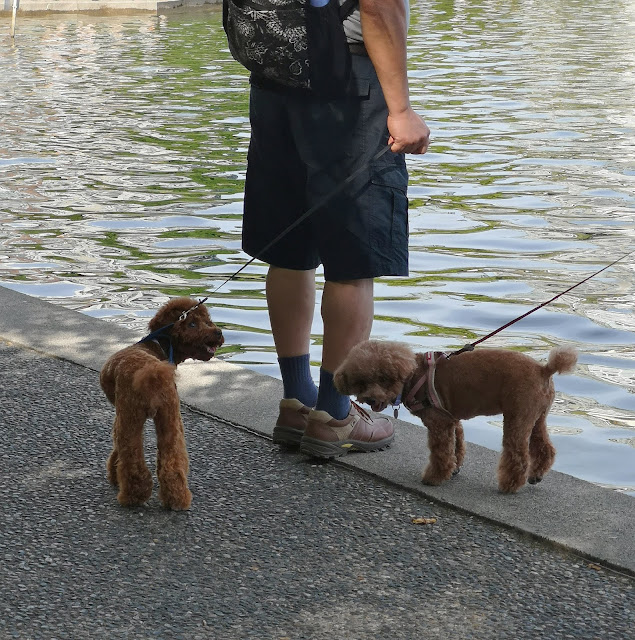 For an animal lover like me, a walk along the Sea Wall provided an excellent opportunity to meet, and pet, many of the dogs that live in the neighbourhood.  The beautiful weather meant that every dog (and their owner) was out enjoying the sunshine and some were jumping into the water to retrieve sticks or balls. 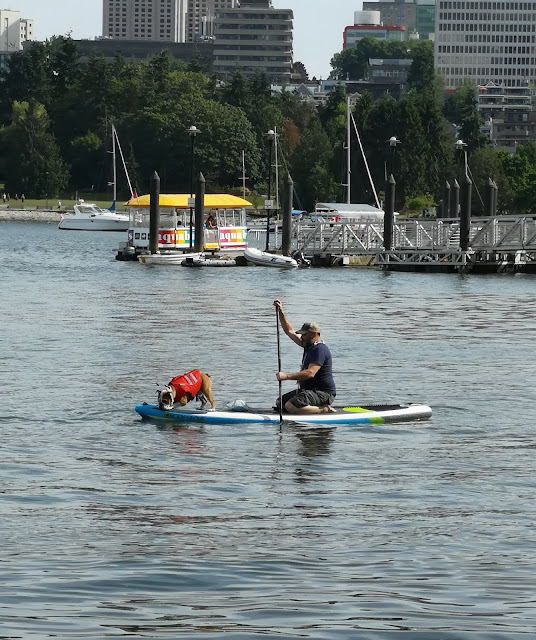 I watched this pup and his human on the paddle board for quite a while.  There was a woman with them on her own board and the dog would go from one to the other.  They had stuck small Canadian flags in the dog's collar and put a red and white garland around his neck and when they were taking photos it made me think this was more of a social media opportunity than an enjoyable excursion for the dog. 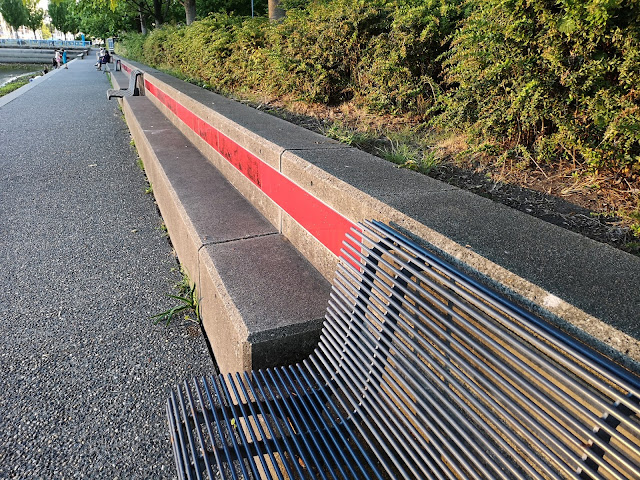 While exploring my neighbourhood with Melanie, we stopped by H-Mart Supermarket which carries all things Asian, including groceries, skincare and beauty products, home accessories and health supplements. 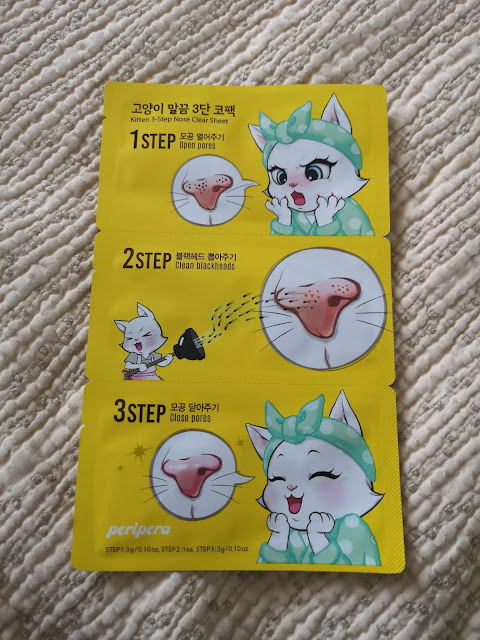 I bought this, well, because OMG the packaging!  Who knew kitties could get clogged nose pores?
I haven't tried it yet (on me, not Sylvester) so I can't vouch for its effectiveness. 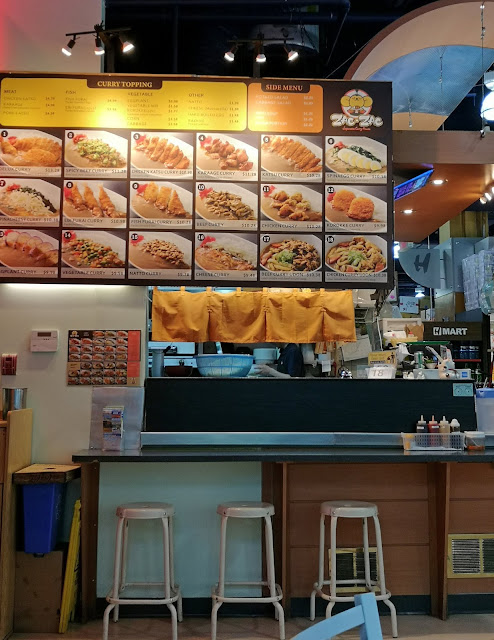 ZAC-ZAC is a food court-style eatery located inside the H-Mart that offers Japanese curry and Katsu dishes.  I had the pork cutlet Katsu curry and it was very good.  Most of the meals I ate while I was in Vancouver were from small places like this. 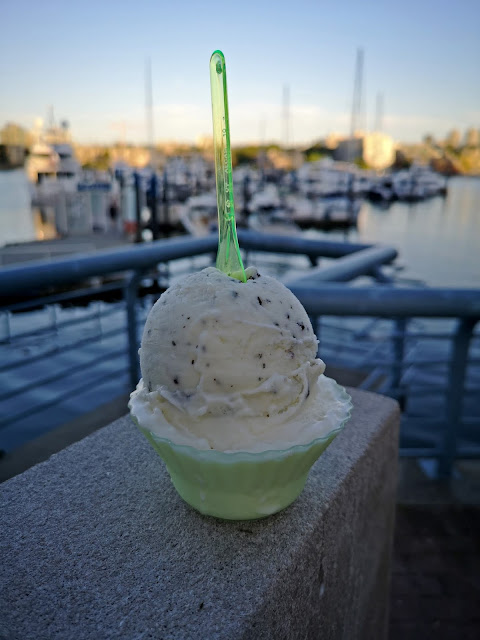 Early in my visit I discovered Baggio Gelateria and Pizzeria near the seawall, and after trying a scoop of organic coconut and rum gelato, combined with a scoop of fresh mint with Ecuadorian chocolate pieces, I was hooked.  Their gelato is made on the premises daily using natural products including fruit from local farms.

On my second last day I discovered La Cantina, where I had some yummy tacos, and was also enamoured with the decor... 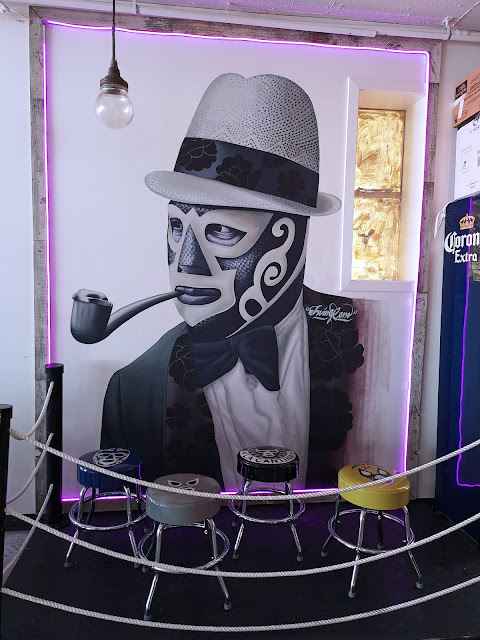 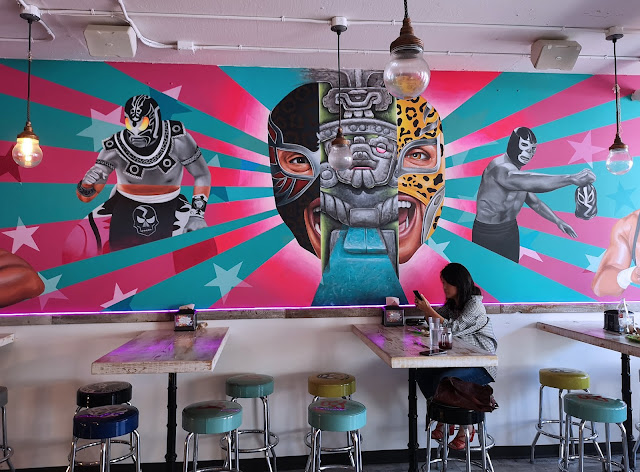 Even the stools had images of wrestling masks.  The brilliant wall murals were created by Mexican artist Irving Cano.


So, enough about food....
What do women who love dressing up do when they hang out together?

They go to Nordstrom and play fashion model, that's what! Both of us shop primarily secondhand from thrift and consignment stores, so when an opportunity arises to try on some beyond-our-budget high end pieces, we'll take it. 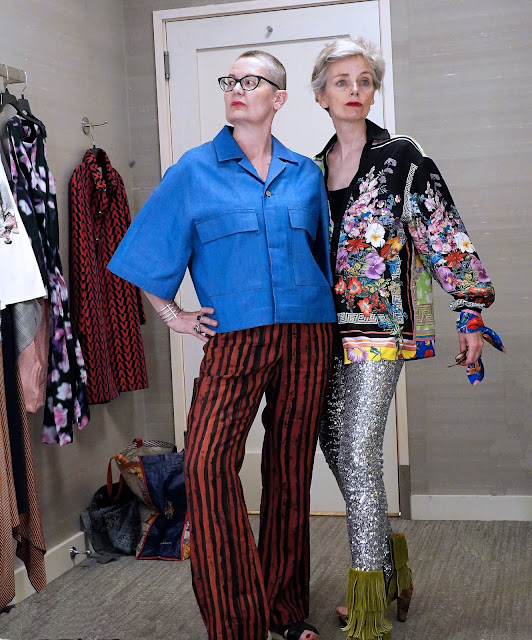 The staff were very nice and gave us a large change room to ourselves. I'm wearing the Dries van Noten Valimera crop sleeve denim jacket paired with cotton flared pants.  The jacket is something I would wear with many of the items in my wardrobe, but it would need to be marked down more than what it was for me to take it home. Melanie was working floral and sequins with her own fringed heels. 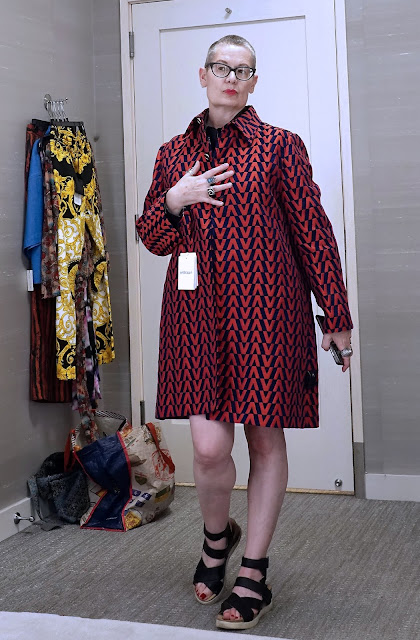 I liked the colour combo and the streamlined shape of this Valentino coat, but the very obvious "V" pattern was a bit much for me.  I'm not a fan of broadcasting what brand I'm wearing. 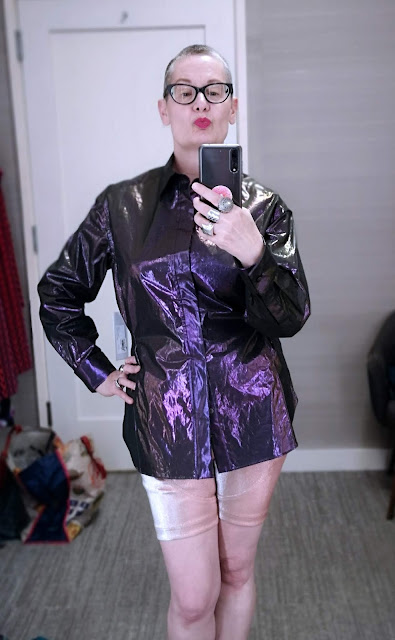 I was rather in love with the shiny pink bicycle-style shorts I'm wearing in this photo (alas, they were too small; I couldn't do up the zipper at the back) and the shirt by the brand Area was a good colour but a bit too crunchy. 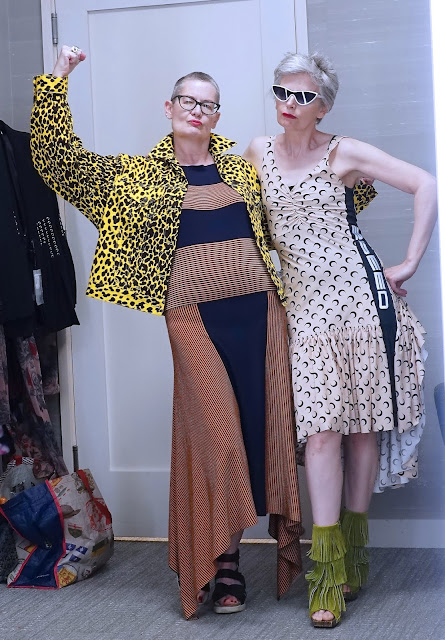 The fabric of the Loewe dress I'm wearing made it comfortable and sexy.  Melanie is also rocking a body conscious funky dress with her own cool shades. YEAH! Let's hear it for playing dress up at any age!

We also play well with others, so when I mentioned to Sheila, who lives in Victoria, that I would be spending some time in Vancouver (we have followed each other's blogs for years, but never met), and she offered to fly over and spend a day with us, I was thrilled!  Finding, and connecting to, like-minded women has been the best thing about blogging for me, and I've been lucky in that the bloggers I've met face to face have turned out to be just like the selves they present on their blog.  Case in point.... 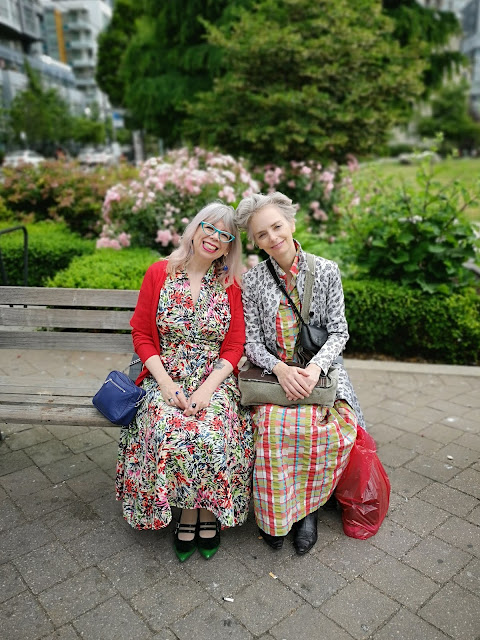 Sheila on the left, Mel on the right

Sheila was as cool, colourful, and delightful, as she is on her blog.  We had a jam-packed several hours together that included grabbing some lunch on Granville Island, and some stellar shopping at Turnabout consignment (you'll see some of the great things I found in a later post).  You can read Sheila's post about our day together on her blog here.

You must be tired of reading by now, and I am still trying to get my sh*t together to return to work tomorrow, so I'll leave you here, and be back with more of my Vancouver adventures (including a photo shoot with Melanie and a workshop with artist Brooke Shaden) later this week.
Posted by Forest City Fashionista at 4:21 PM 12 comments: