If you're a fan of the series Game of Thrones, you'll get the reference in the title of this post.  I'm currently in the midst of the Game of Thrones re-watch in preparation for the final season which airs on April 14th.  I'm only 3 episodes into Season 3, so I've a ways to go and I realize I may not make it all the way through 7 seasons in 3 weeks.  I've had many favourite shows over the years (Deadwood, Six Feet Under, Hannibal, Veronica Mars, Penny Dreadful, Buffy the Vampire Slayer, etc) but I haven't felt as deeply invested in the outcome of a series as I do with Game of Thrones.  Instead of going off on a long-winded rant of why I love the show, I will move on to the subject of this post.


I used to think I wore a lot of black in my early adulthood, but when I look through old photos, I see that aside from my favourite skinny black jeans, I wore quite a bit of colour, so perhaps it was just my attitude that was dark?   I had a few years in my 30's during which my mother would ask me "Do you own any other colour aside from black?, which must have been during my "I need to wear professional work clothes" phase as I transitioned from retail jobs to office work.  I remember having a temporary job in an accounting firm with a strict dress code, and everything I wore during the two months I worked there was black.

In my 40's I embraced more colour, which may have coincided with my more mellow emotional state.  I loved colourful vintage pieces from the 80's and I had a couple of floral print jumpsuits that I wore in the summer.  But by the time I turned 50, I was slowing drifting back to the dark side.  More pieces of black clothing crept into my wardrobe, and when I went thrift shopping, I always looked at the black pieces first.  The colourful pieces were sold or donated.  Every time I was just about to take another piece of black clothing home, I would stop myself, and say "why don't you get something in a bright, or lighter colour?"   The answer would always be, "because I feel good in black". 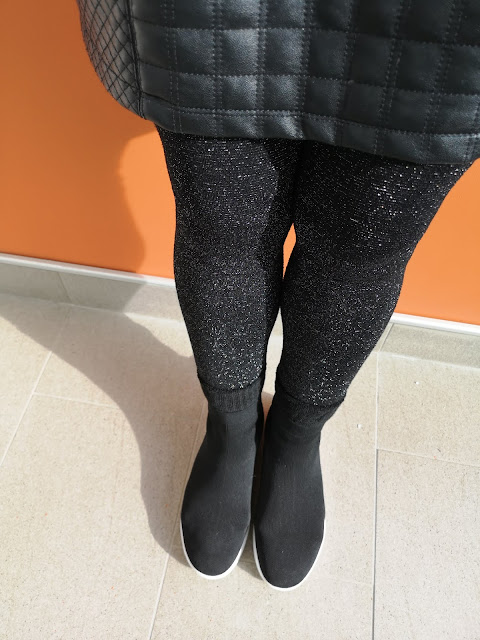 Black can be rather boring if you don't pay attention to shape and texture and if I am wearing head-to- toe black (which isn't often), I will make sure there's some visual interest with different fabrics.

I don't think my fondness for  black has anything to do with it being a supposedly "slimming colour", mind you, I did start gaining weight in my 50's.  I think it has more to do with embracing a tougher and slightly more punk feel to my style, which suits my greying hair, which I've stopped colouring in the last few years. 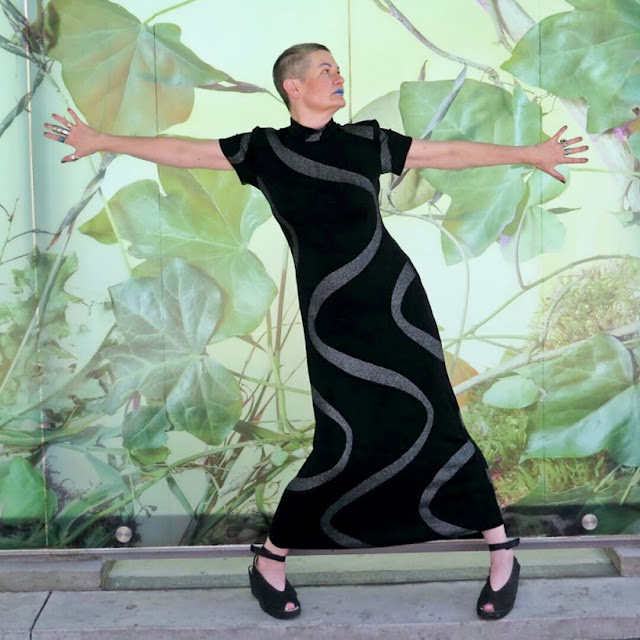 Photo from shoot I did with Melanie in Vancouver in 2016 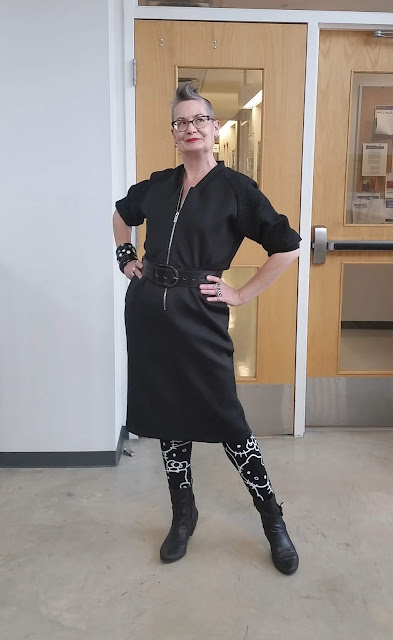 It isn't a seasonal thing - I wear just as much black in the summer as I do in the winter. 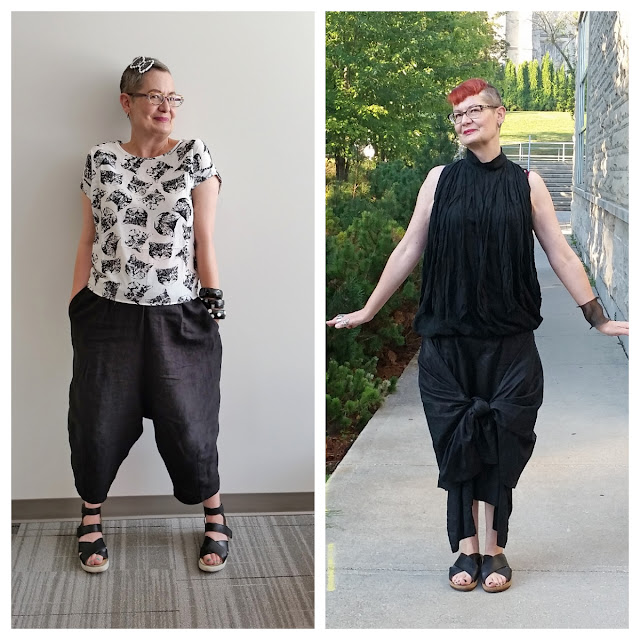 The late street photographer Bill Cunningham was quoted as saying "Fashion is the armor to survive everyday life"  and I feel like black is my personal armor.   I've watched many of my blogging friends (Melanie, Vix, Suzanne, Sheila)  happily embraced bright colours and patterns, while I feel more like a crow amongst birds of paradise.   I will add blue or grey, or even a bit of red now and then to break up the swath of black, but the foundation pieces of my wardrobe are black, and when I shop for clothes, I always look at the black pieces first.  When I was in New York in the fall, a friend took me to the Dover Street Market, which carries cool high end brands like Comme des Garcons and every piece I tried on (and loved) was black. 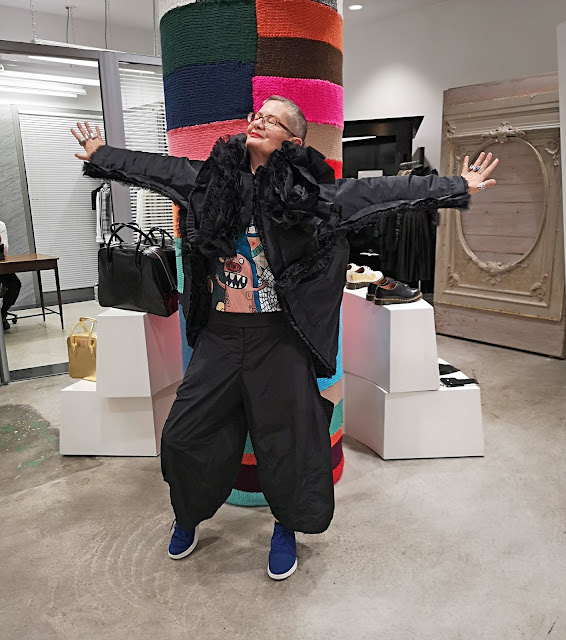 The massive neck ruffle on this Comme des Garcons jacket made me feel like a star, (worn with my own monster shirt and pants) 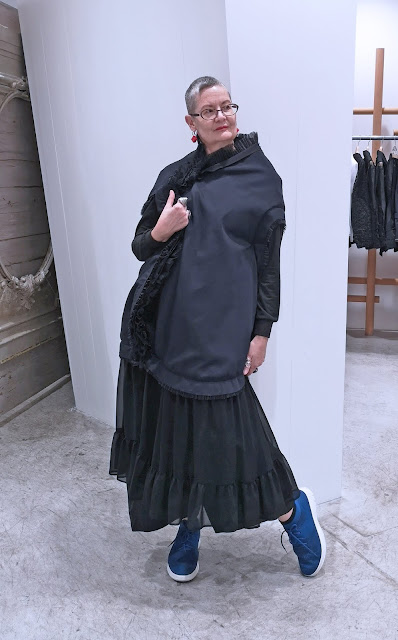 The CDG dress I'm wearing above is all one piece.  The mix of fabrics was wonderful 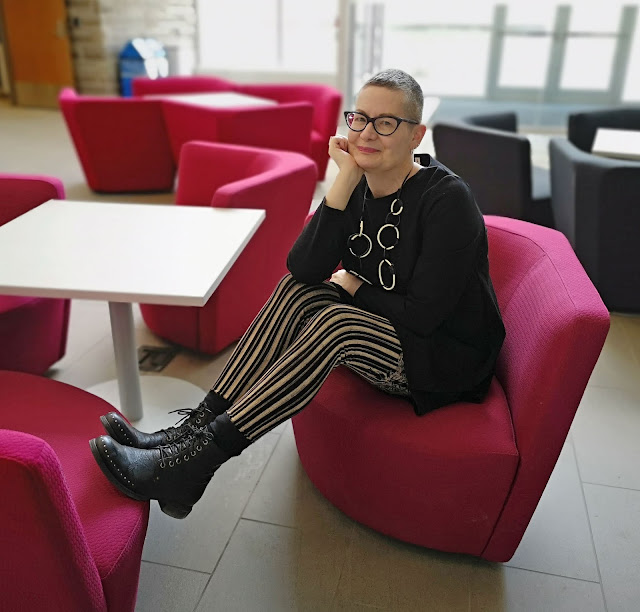 This is pretty much my idea of a perfect outfit 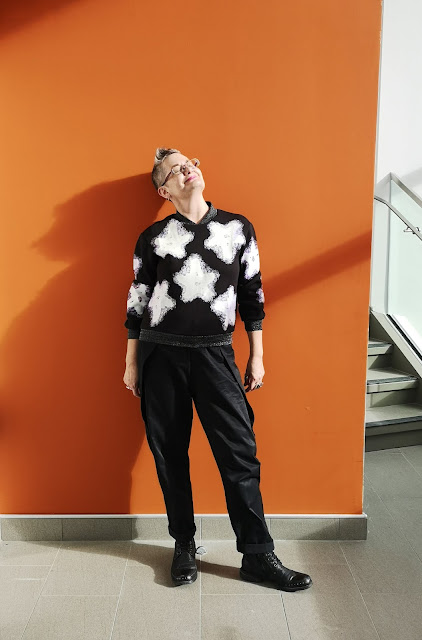 The background of the top I'm wearing above is actually dark blue, but looks black here.  I look so blissed out because this was one of the few sunny days we had this winter. 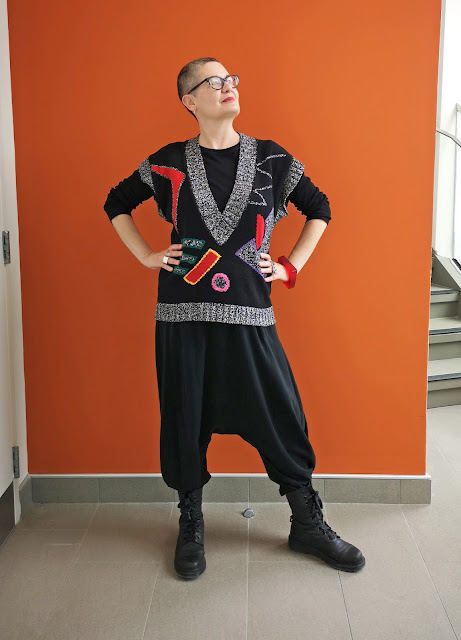 And Now, Back to Game of Thrones... 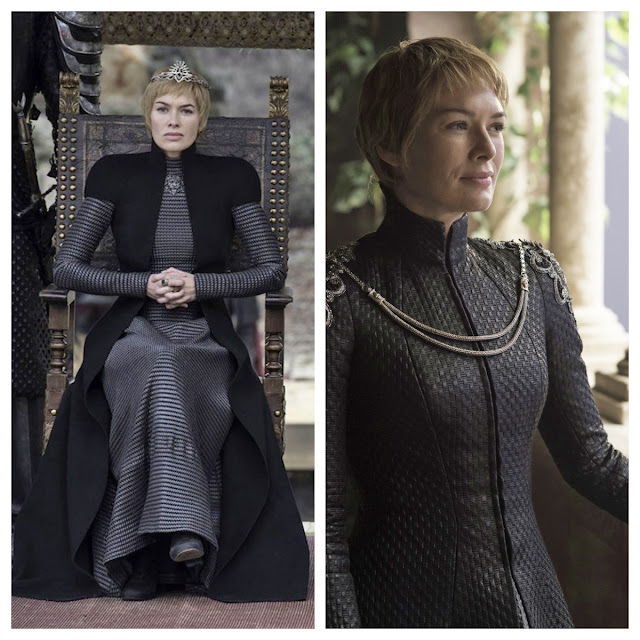 As the series draws to a close, all of the strong women end up wearing black, including the reigning Queen, Cersei Lannister, who is a nasty piece of work.  The colour suits her. 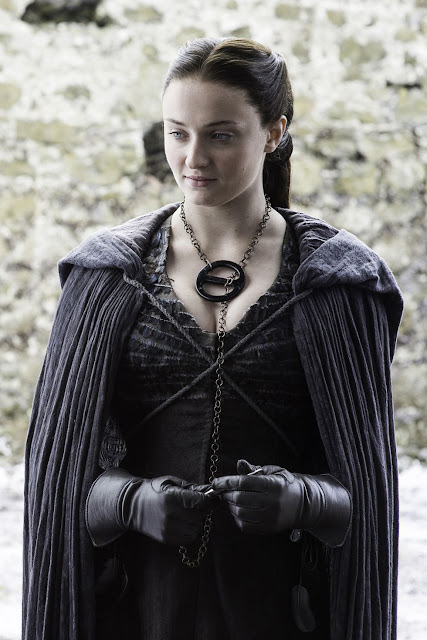 However, the "good guys" in the series also adopt a much darker wardrobe as time goes by.  Sansa Stark, currently the Lady of Winterfell, is all grown up and has abandoned the soft pretty colours she wore in the first few seasons of the show. 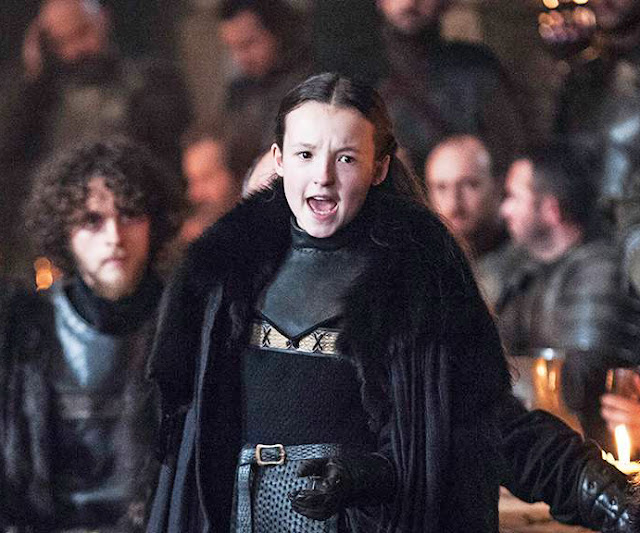 I had to end with this photo of one of my favourite characters - 10 year old Lady Lyanna Mormont, who is wiser, and braver, than many of the other much older characters.  And of course, she is always dressed in black!

Do you have a lot of black in your wardrobe, or do you take a more colourful approach to dressing?
Posted by Forest City Fashionista at 11:12 PM