Femmes Noires - Mickalene Thomas at the AGO


Hello!  Hope you had a nice "whatever you do or don't celebrate".  I am in the camp of the non-celebrators so I look forward to having time off work over the holidays so I can do a day trip or two and lie around on my couch with my cat, a book and Netflix.   After a few days of my own company I went to Toronto to the Art Gallery of Ontario with the intention to see the exhibit Anthropocene.  I arrived earlier than my designated ticket time, so I went upstairs to see the Mickalene Thomas exhibit, Femmes Noires.  I was not familiar with her, or her work, but the photos on the AGO website looked interesting, and as it turns out, I enjoyed her exhibit much more than the one I came to see.

*Warning - for those who are offended by the sight of women's naked breasts, you might want to stop now* 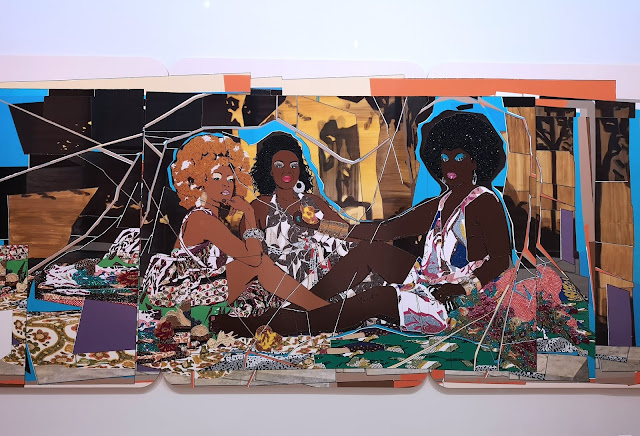 Mickalene Thomas is a contemporary African-American artist based in New York, who is known for her elaborate paintings that incorporate rhinestones, acrylic and enamel.   The exhibit at the AGO is her first large scale solo exhibit to be held in Canada.  The wall-sized painting in the above photo, which greets visitors to the exhibit, is Thomas' re-imagining of French artist Edouard Manet's painting Le dejeuner sur l'herbe (1863).

"Mickalene Thomas puts Black women at the centre of her practice.  Her work celebrates the complexity and diversity of Black female identities as she tackles issues of equality and representation, filtered through a queer feminist lens....Thomas deliberately challenges the Western art-historical canon and creates new possibilities for seeing a range of Black bodies." 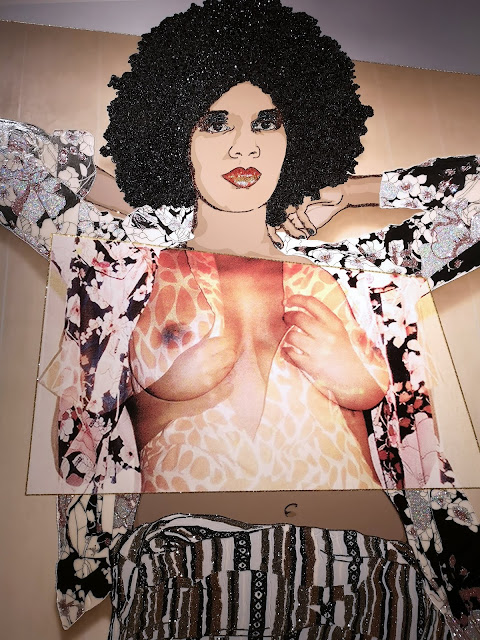 The women in Thomas' work are beautiful, lush, and exude confidence and self-assurance.  Some, like the subject in the painting above, call to mind characters in the blaxploitation films of the 1970's.   The pieces in the exhibit incorporate painting, collage and photography and are incredibly decorative, visually accosting the viewer with colour, pattern and sparkling rhinestones. 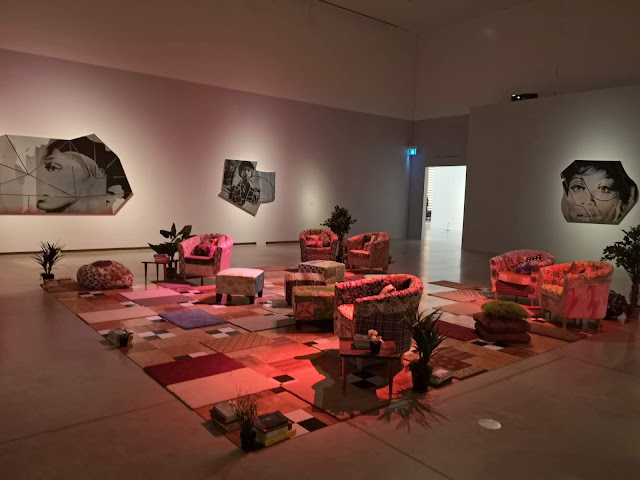 Living Room Tableaux - Do I Look Like a Lady (Comedians and Singers), 2016

The exhibit has three living room spaces Thomas refers to as "Tableaux" that contains colourful furniture and floor coverings where the viewer can sit and experience the art, read a book (each room contains a selection of books by black authors), or engage with other viewers.   Each room features a large scale video installation; "Do I Look Like a Lady" (above) features a split screen with comedians such as Wanda Sykes, Whoopi Goldberg and Moms Mabley on one side, and singers (including Josephine Baker, Nina Simone and Whitney Houston) on the other.   Another room is dedicated to images from the film The Color Purple which was adapted from the book of the same name by Alice Walker.  According to Thomas, "the book ignited a strength and spirit in me that have stayed until this day".

While Thomas was growing up she admired Black women who defied racism and oppression to become cultural icons.  She and many other Black women were inspired by performers such as Josephine Baker, Nina Simone and Diana Ross, and Thomas has created powerful images of the iconic women who challenged the cultural norms of art history.  The mirror-based works (see above and in previous photo) begin with a polaroid from her collection which she then bleaches, scans and then photographs as it appears on her computer screen.  This is followed by further post-processing and the final image is then silk-screened onto a mirror. 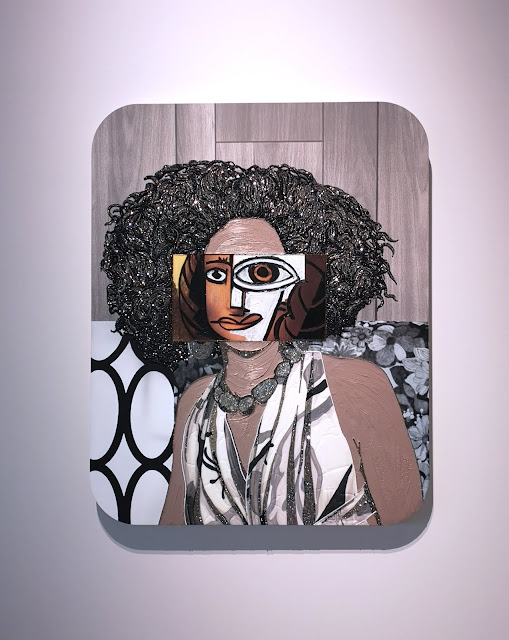 The collaged work above directly references the cubist style of Picasso, who was partly inspired by highly stylized African masks which featured non-natural, but identifiable human faces.  By Thomas incorporating these geometric and mask-like shapes into her own work, she is owning the influence that her ancestors had on Western art. 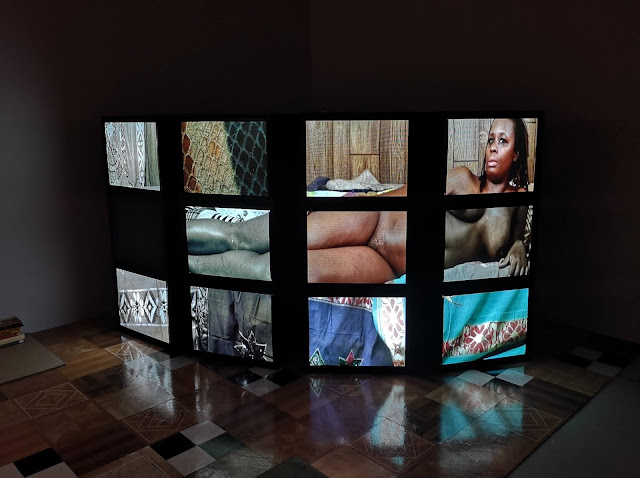 In the video installation above, the artist's own nude body stretches across the multiple video screens, challenging our historical notions of beauty.  Other images that appear on the screens include those of 1970's textiles and famous works of Western Art that prominently feature female nudes. 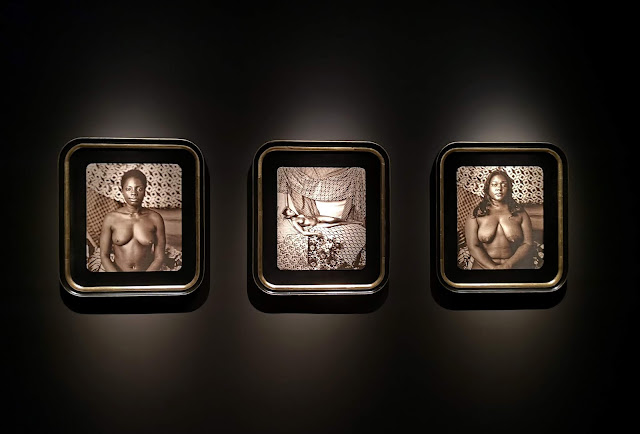 The series of polaroid images above have many art-world references, included the titles, which refer to French painter Gustave Courbet. 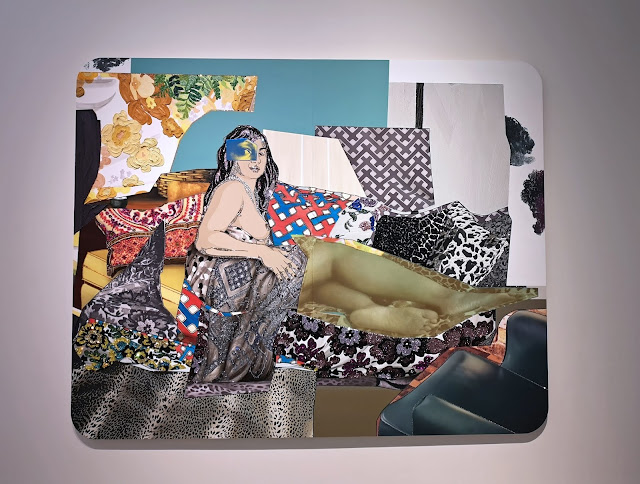 Shinique, the woman in the collage/painting above, reclines on a colourful mix of fabrics.  She looks directly at the viewer with a confident stare that dares you to not find her strong but also vulnerable. 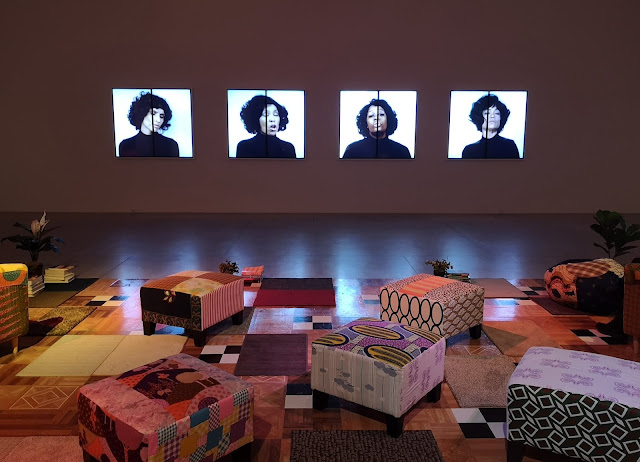 "Los Angelitos Negros" (little black angels) is centred on Eartha Kitt's performance of the song of the same name. One video screen features Kitt singing, while the other three feature Thomas and two other performers, styled like Kitt, lip-syncing the lyrics along with her.

Mickalene Thomas: Femmes Noires runs until March 24th at the Art Gallery of Ontario in Toronto 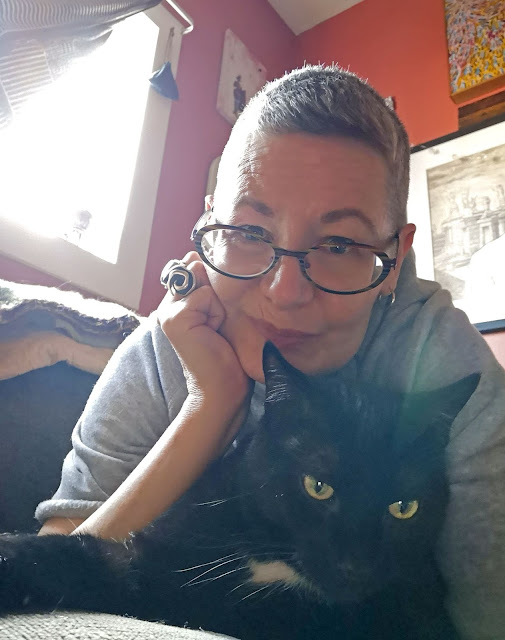 As this is my last blog post of 2018, I want to thank all of you who still visit, even though the frequency of posts has dropped considerably.  Your loyalty is much appreciated, and Sylvester and I wish all of you Peace, good health, and joy in 2019.
Posted by Forest City Fashionista at 9:04 PM