The Power of Pink

The mission of the Museum at the Fashion Institute of Technology (FIT) is to advance knowledge of fashion through exhibitions, programs and publications.  It is best known for its award-winning exhibitions, and I've been fortunate to see several over the last 6 years.  The Museum at FIT is always on my list of places to go when I visit New York in the fall. 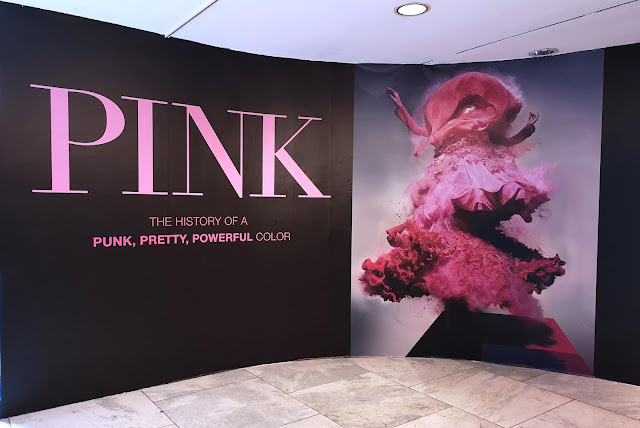 The current exhibit in the Special Exhibitions Gallery is called Pink: The History of a Punk, Pretty, Powerful Colour.  The exhibit features approximately 80 outfits from the 18th Century to the present, and places men's, women's and children's pink clothing from Western and non-Western cultures in a historical context.

Many languages do not have a word for "pink", or have only developed one in the last few centuries.  "Rose" as an adjective of colour entered French language in the 18th century, and pink as a noun became part of the English language at the end of the 17th century. 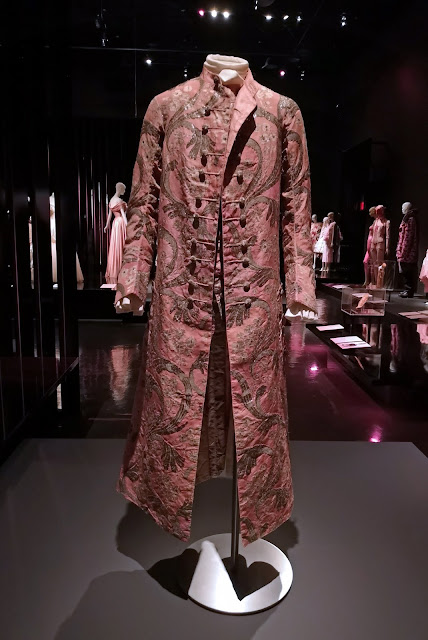 In the 18th century in Europe it was considered perfectly masculine for men to wear the colour pink. It was also considered a colour to be worn by the young as it symbolized good health and vitality ("in the pink"). Pink and blue were considered interchangeable colours to be worn by children.  By the late 19th century some parents were starting to favour pink for girls. 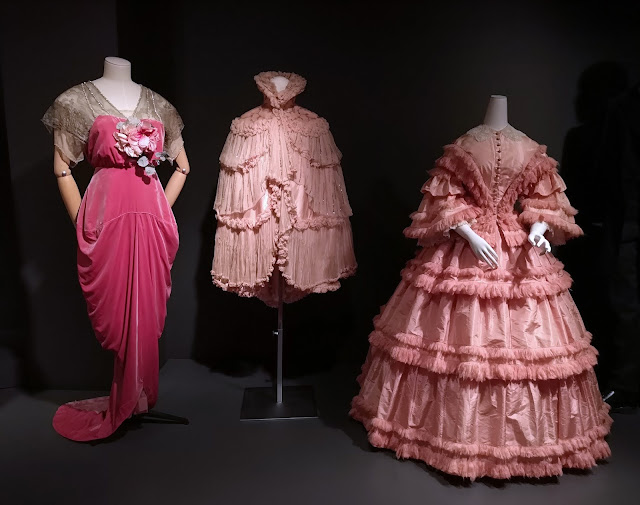 As Euro-American men increasingly preferred dark, sober colours like black and navy for their clothing, bright and pastel colours were left to women.  This feminization of colour was a significant development of the 19th Century. 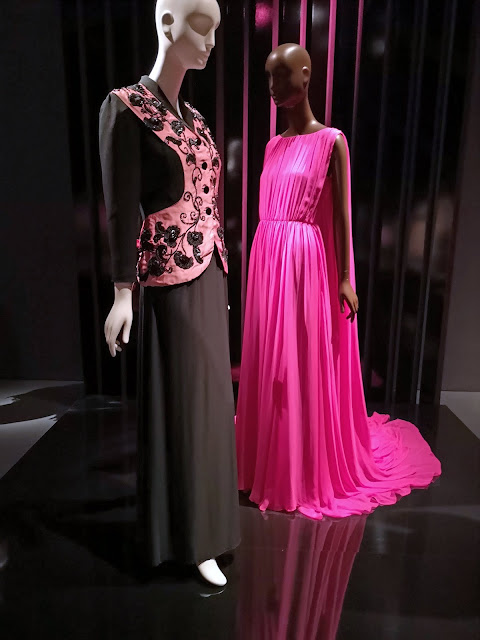 In 1936, Italian-born fashion designer Elsa Schiaparelli launched the colour "Shocking Pink".  In her memoirs, Schiaparelli recalled, "the colour flashed in front of my eyes.  Bright, impossible, impudent, becoming, life-giving.....a colour of China and Peru but not of the West - a shocking colour, pure and undiluted."

By the 1950's, pink was strongly associated with femininity.  The decade had a strong focus on gender conformity, and fashions of the era were extremely age and gender specific.  The social turmoil of the late 60's lead to a "unisex" movement in fashion in the 1970's which temporarily quashed the appeal of pink for women's and children's clothing.  Feminists considered it a "childish" colour.  Then in the 1980's,  pink for little girls became popular again.  In the mid-1980's, the company Luvs introduced colour-coded diapers for babies - pink for girls and blue for boys. 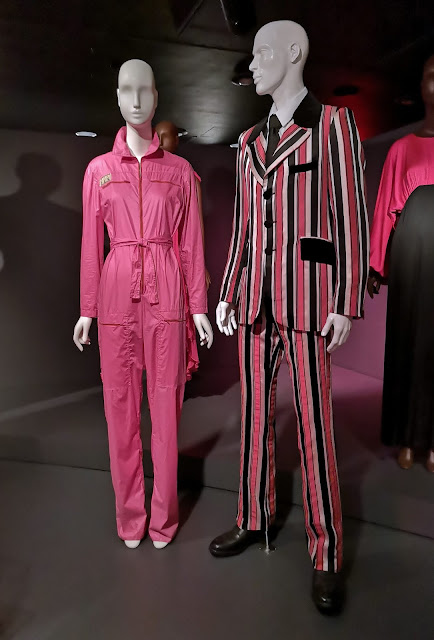 In women's clothing, the pastel pinks of the 50's and 60's evolved into neon pink in the 1970's.   On the left is a Fiorucci cotton sateen flight suite, circa 1976.  The 60's and 70's brought the return of bright colours back into men's clothing as seen in the acetate satin and cotton velveteen man's suit on  from Granny Takes a Trip, circa 1971, on the right. 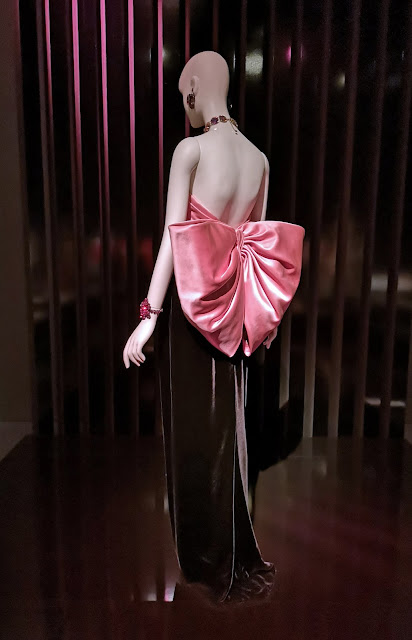 Yves Saint Laurent, who designed the dress in the above photo, was said to have loved the colour pink. This velvet dress with giant satin bow is among his most famous creations.

Pink is also associated with parts of the body related to sexuality - the title of Carrie Fisher's romance novel, "Surrender the Pink" is a colloquialism referring to male sexual advances on the female. 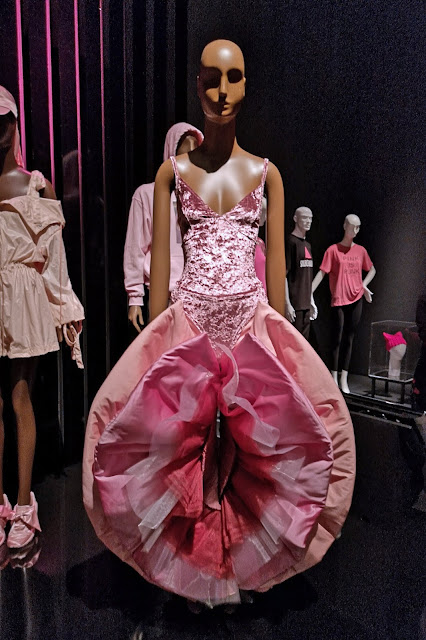 Actor/singer Janelle Monae wore a duplicate pair of the "Vagina Pants" above in the video for her song "Pynk" which celebrates female sexuality and the "pink parts of the body".  The pants were made by Duran Lantink. 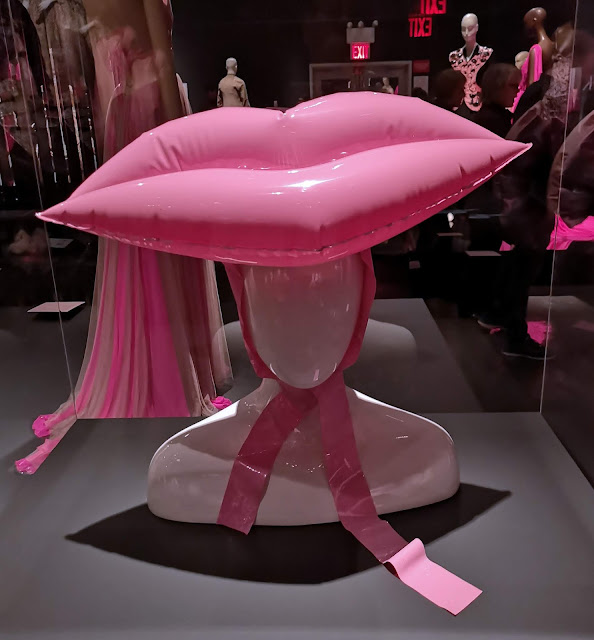 Lips, another "pink part" of the body are represented by a vinyl hat by Stephen Jones for John Galliano, 2005 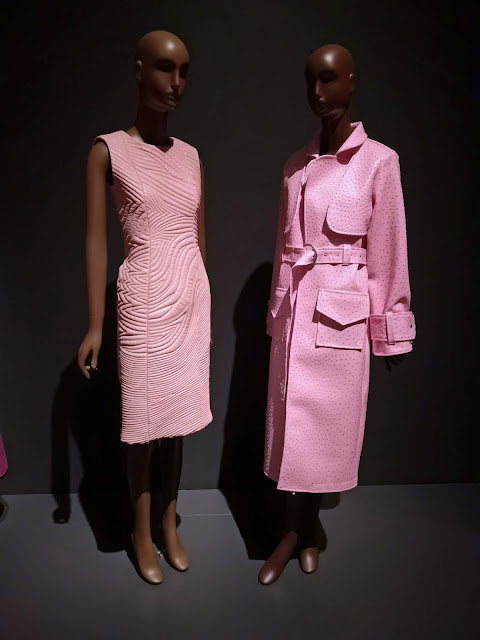 The leather dress on the left by Ghana-born designer, Mimi Plange, was inspired by African scarification.  According to the designer, "the light 'fleshy' pink was chosen to represent fresh open wounds, and the beauty they represent in traditional African scarification."  The faux ostrich coat on the right is by South African designer Thebe Magugu. 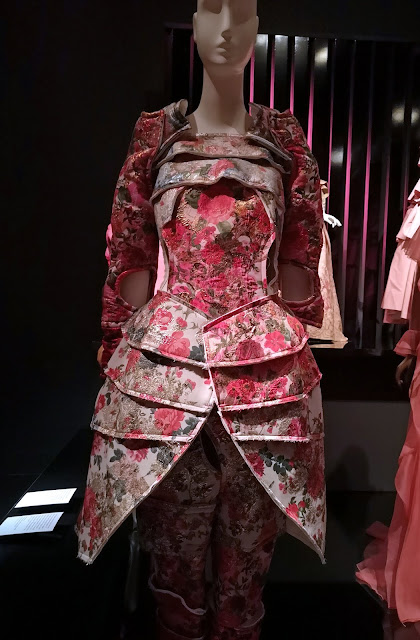 Pink can also be fierce and powerful, as seen in this floral print "body armor" for a woman warrior, designed by Rei Kawakubo for the Comme des Garcons "18th-Century Punk" collection from 2016 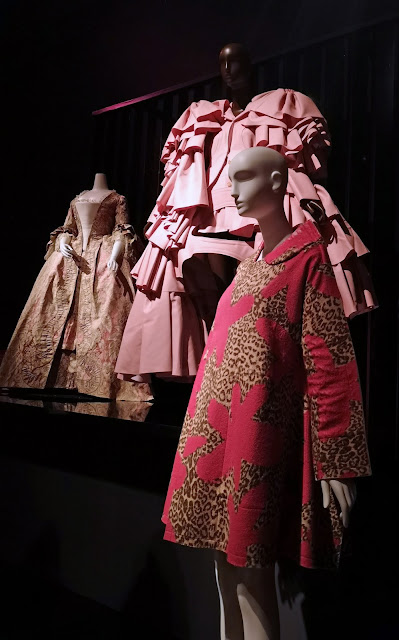 Two more of Kawakubo's designs from her "18th-Century Punk" collection can be seen in this photo.  In the foreground, a coat that played off of the punk's love of bad taste with its combination of hot pink and leopard print.  Behind it is a modern version of pre-revolutionary French fashion with ultra-wide shoulders and sleeves made of faux leather echoing the shape of the panniers that were worn under dresses from that era to extend the hips. 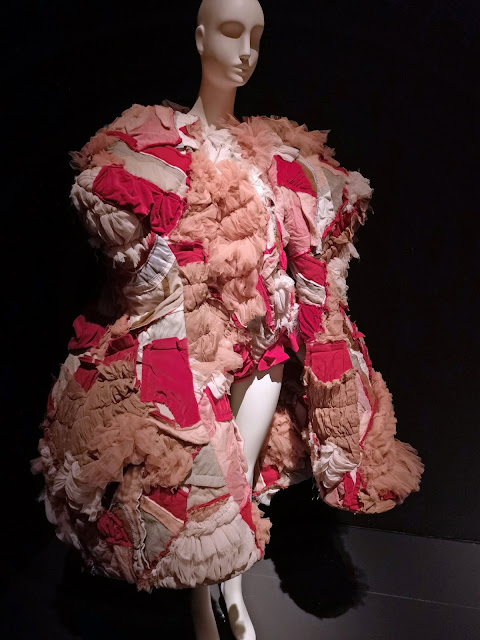 
Pink has long played an important role in Japanese culture but its greatest impact came during the late 20th century with the rise of Japanese girl culture and Lolita style with its emphasis on childish femininity.  Red, white and pink are Japan's favourite colours.   Traditionally in Western culture, the combination of red and pink is considered "clashing" but wearing colours that "clash" is now often encouraged in fashion. 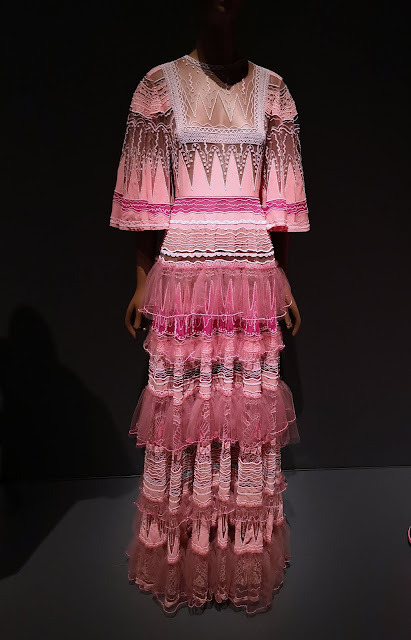 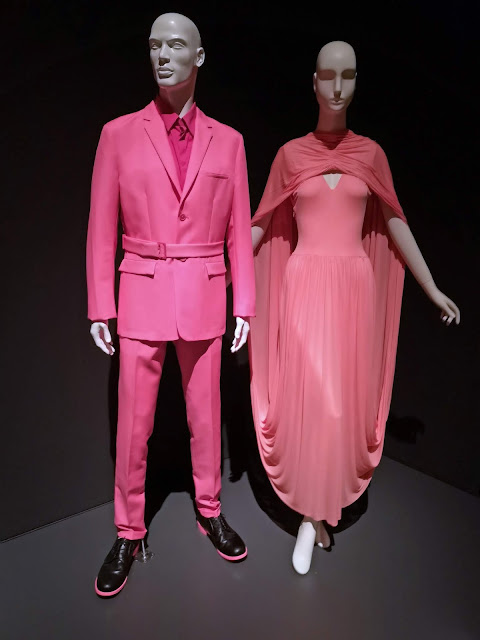 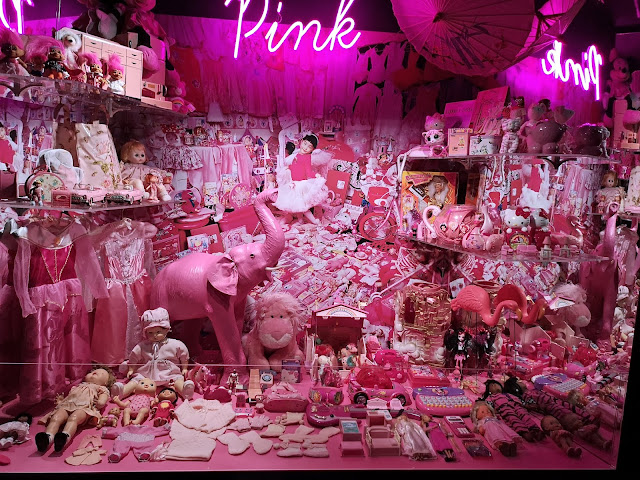 This diorama of pink girls' toys was inspired by JeongMee Yoon's photograph, "Jeeyoo and Her Pink Things" (2007) which is used as a background.
In the 1990's, pink began to "toughen up" so to speak, when the Susan G. Komen Foundation gave pink ribbons to runners in its New York Breast Cancer Survivors' race.  In 1992 the pink ribbon became the official symbol of Breast Cancer Awareness Month.  Other appropriations of the colour pink as fierce and powerful appeared in the last decade, most recently as the pink "Pussy Hats" worn by protesters in the Women's March in 2017.

Pink: The History of a Punk, Pretty, Powerful Colour continues at the Museum at FIT in New York until January 5th, 2019