What DID I do on My Summer Vacation?


Now that it's nearing the end of August, I find myself trying to remember what I did the last couple of months.  I know I went to Toronto, because I wrote about it on my blog, which brings up the question, "If it's not on your blog or your Instagram, did it really happen?"

I took a few long weekends from work, but I usually don't take a lot of vacation time in the summer so that I can go away in either the fall or the spring.  I did go to the beach one day with my BFF and there's even a photo on my IG to prove it.  I'm not much of a beach girl, but we brought snacks, books and our own shade, and the water was shallow enough that even a non-swimmer like me could enjoy it.  I must have done something else, let's see....

I try to see at least one play during the Stratford Festival season in Stratford, Ontario, and this year I saw the current production of The Tempest, starring Martha Henry in the role of Prospero.  I have long admired Ms. Henry as a person and an actor and had the pleasure of working with her briefly during her tenure as the Artistic Director of London, Ontario's Grand Theatre.  In addition to being a talented actor and director, she treated everyone on staff as if they were equally important to the success of the theatre.  Her performance as Prospero was powerful and moving, and during her curtain call I found myself spontaneously moved to tears as I watched her graciously acknowledge the standing ovation of the audience.  Henry turned 80 this year, and it isn't hard to imagine that this may be the last role of this magnitude she is able to take on at the festival. 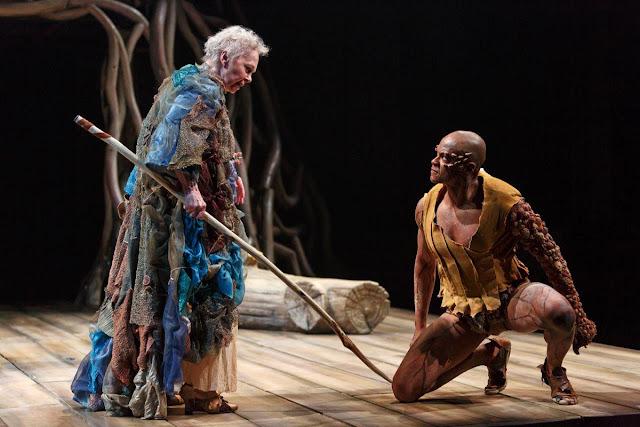 Martha Henry as the sorcerer Prospero, with Michael Blake as Caliban.  Photo by David Hou 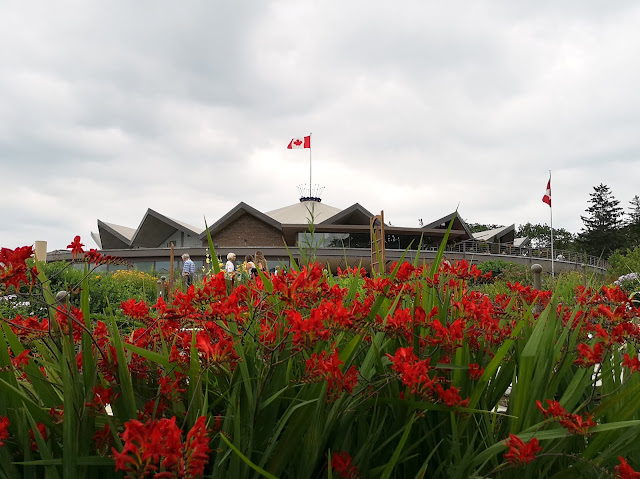 Stratford's Festival Theatre, one of three performance spaces used for productions during the festival 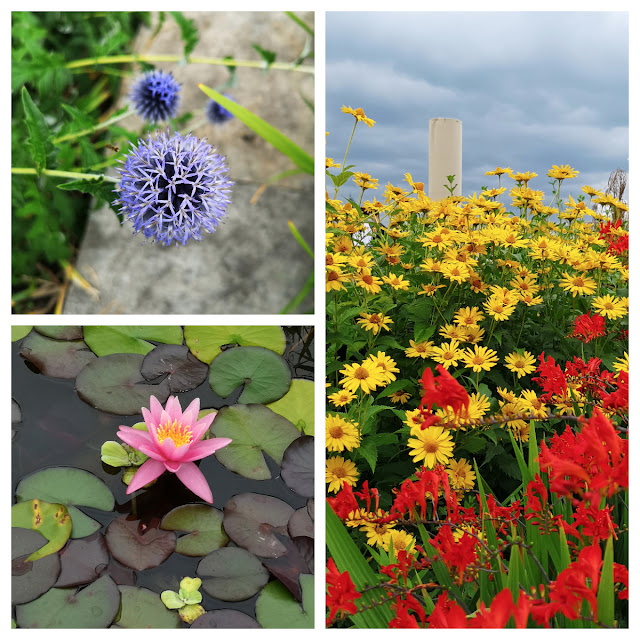 The theatre is also famous for the gorgeous gardens that surround it.  Above are some of the plants in the Arthur Meighen Garden in front of the Theatre. 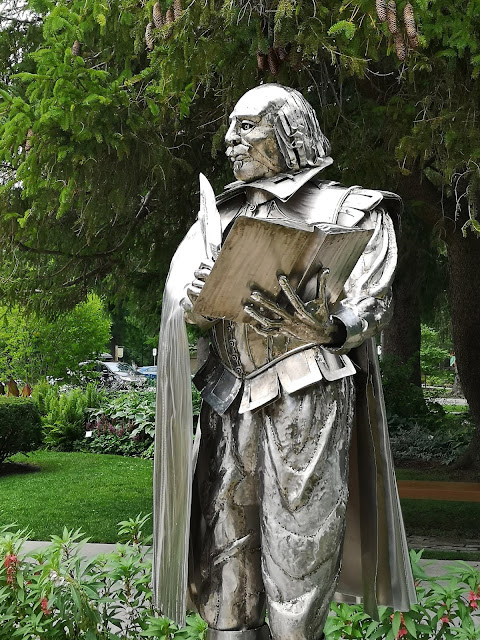 The Elizabethan Garden includes a statue of the Bard himself 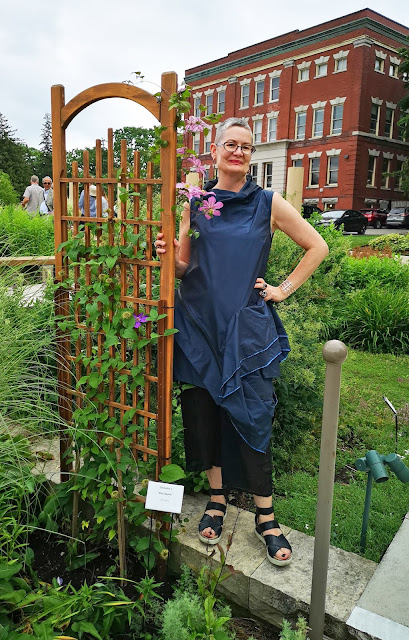 Yours truly, hanging around in the Arthur Meighen Garden, wearing a dress I purchased in the fall from Cora Couture in Stratford.  It's become my default outfit this summer for whenever I want to feel "dressed up".

For some reason, London, Ontario holds their Pride Festival in late July, unlike the majority of the cities in the world who celebrate Pride during the month of June 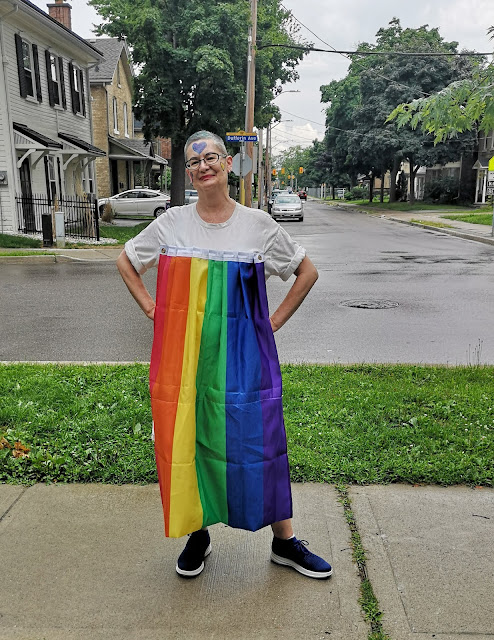 I like to wear something colourful when I'm watching the parade (I have walked in the parade a few years, but generally I watch it with my neighbours) and this year I made a Pride Flag dress (flag, sewn on to t-shirt dress).  I was definitely one of the most visible spectators.

I saw my first Pride Parade about 30 years ago in Toronto, and it was a crazy, loud, and colourful spectacle featuring scantily-clad men and women dancing on floats and in the street, topless lesbians on motorcycles, and magnificent drag queens.  Spectators blew whistles and danced along with the participants and it was one hell of a party.  There were always members of the LGBTQ community who felt the parade was not a fair representation of the diversity of the community, and that it gave the impression that all homosexuals were into leather, dressing in drag, or partying in public while naked.   This was a valid point, and as more community organizations and politicians participated in the parade, and more families brought their children to watch the parade, it became more of a "family friendly" event.   I think it's great to see so many kids waving rainbow flags alongside their parents as spectators or participants, but there are some things no self-respecting Pride parade should be without, namely, Dykes on Bikes, who have traditionally led the parade, and drag queens. 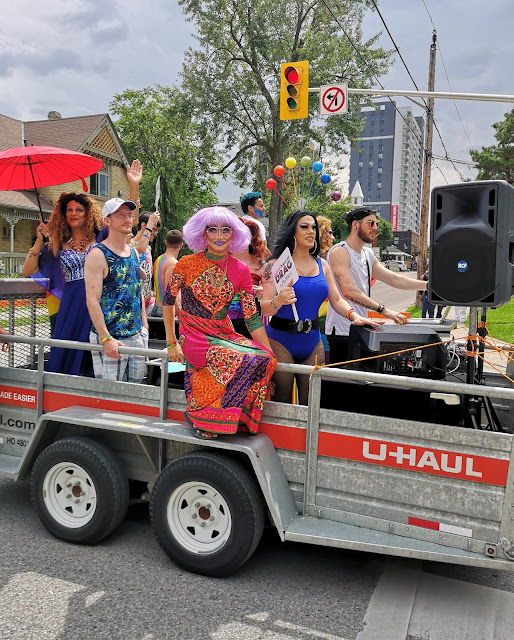 The Dykes on Bikes were a no-show at this year's parade, and the small group of drag queens  participating were a pretty subdued bunch (that said, kudos to the queen in the lavender wig). Could they not have stuck a few decorations on that U-Haul???  There was a ton of parade swag handed out including flags, candy, stickers, beach balls, beads, temporary tattoos, etc. but I would have gladly traded it all for the sight of one statuesque queen in an extravagant dress, heels, and a towering wig.

It's been a very hot summer, with temperatures consistently topping 30 degrees celsius, not including the humidex.  We've also had a lot of thunderstorms and rain, all of which made curling up on the couch in air-conditioned comfort with a book, Netflix, and a cat seem like the best choice of how to spend an evening 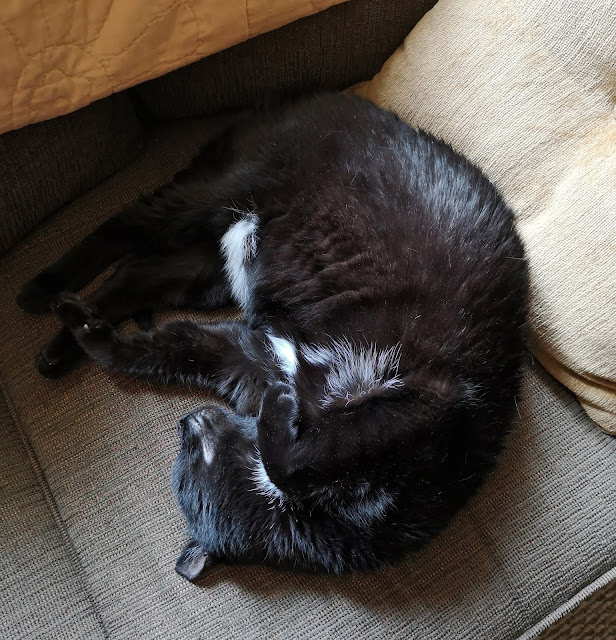 And what has Sylvester been doing this summer, you may ask? Mostly this, while I plowed my way through a stack of books that included Terry Pratchett's Discworld Series, Kate Atkinson, Ernest Hemingway and Margaret Atwood.  I also binge-watched Babylon Berlin, The Alienist, the Frankenstein Chronicles, Anthony Bourdain's The Layover, Anne with an "E", Dear White People, and the new Queer Eye reboot (both seasons) - all available on Netflix. 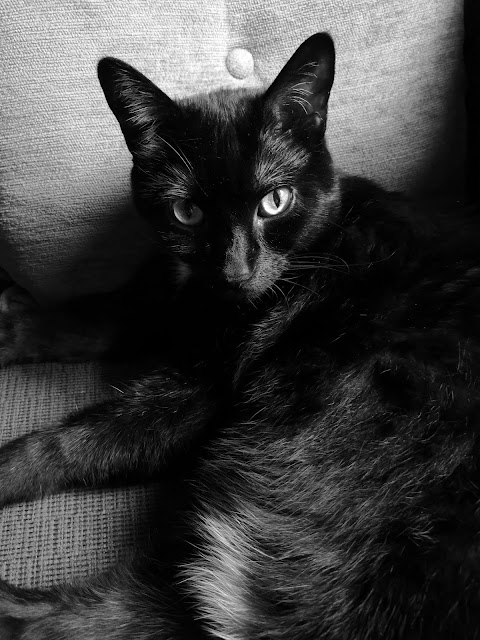 I've also been learning to use the camera on my new Huawei phone (which was used to take all the photos in this post), which has a black and white lens that comes pretty close to duplicating the rich tones of black and white film (see exhibit A above, portrait of a handsome boy)

Yeah, so....that's been my summer.  Truth be told, I'm sick of wearing the same four pieces of loose-fitting linen clothing and feeling like a wet dishrag every time I'm outside for more than 20 minutes.  Bring on the chilly nights and cool days that require a jacket, and no more blasted humidity.
Posted by Forest City Fashionista at 9:53 PM 13 comments: