The Transformers - Iris van Herpen and Philip Beesley at the ROM 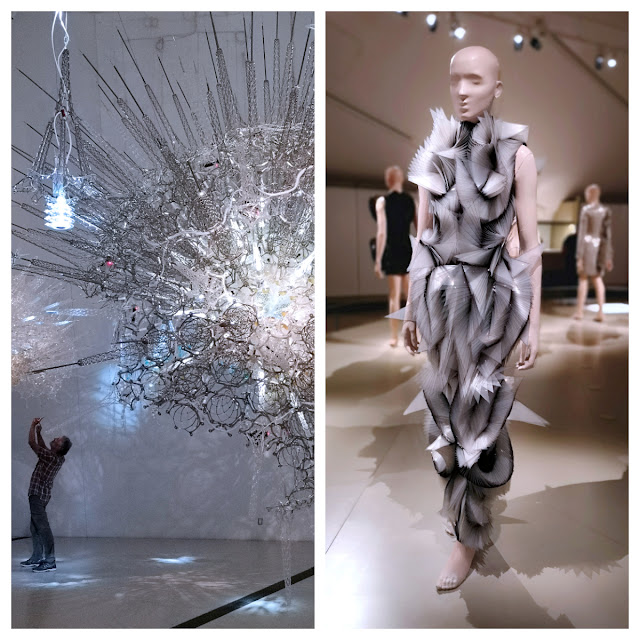 I've been a fan of Iris van Herpen's work since I first saw a photo of one of her 3-D printed pieces so I was very excited when I found out that an exhibit of her designs was coming to the Royal Ontario Museum (ROM) this summer.  As I had already planned a weekend in Toronto in June, I added a ticket to the exhibit to my itinerary. 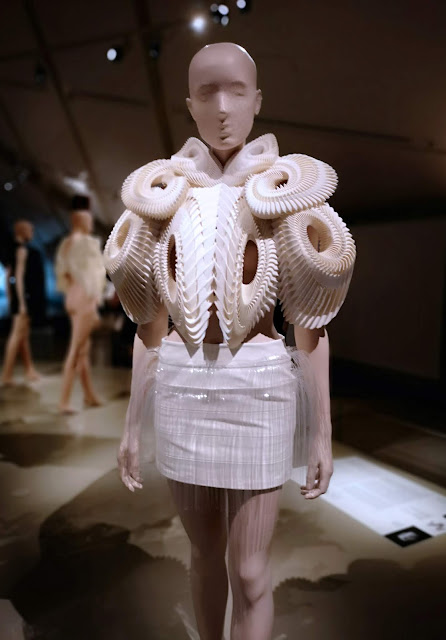 The top of the outfit above was created in collaboration with architect Daniel Widrig, and is the first 3-D printed garment ever sent down a runway.

Iris van Herpen, a Dutch fashion designer (and former Alexander McQueen intern) who had her first runway show in 2007, produces two collections each year.  Her designs have been worn by Bjork, Lady Gaga, Beyonce, Solange Knowles and Cate Blanchett.  She is best known as the creator of 3-D printed garments; Time Magazine named her 3-D printed dress one of the 50 best inventions of 2011.  Her designs are all about shape, texture, and movement, created with materials that are not generally used in clothing design; acrylic plastic, metal foil, metal gauze, ribs from an umbrella, silicon, and iron filings.  Herpen's inspirations range from science and nature, dance,  how the body relates to the space around it, and ephemeral concepts of conversations and experiences.  While she has shown more wearable pieces in runway presentations, the 40+ pieces on display at the ROM are van Herpen at her most extreme. 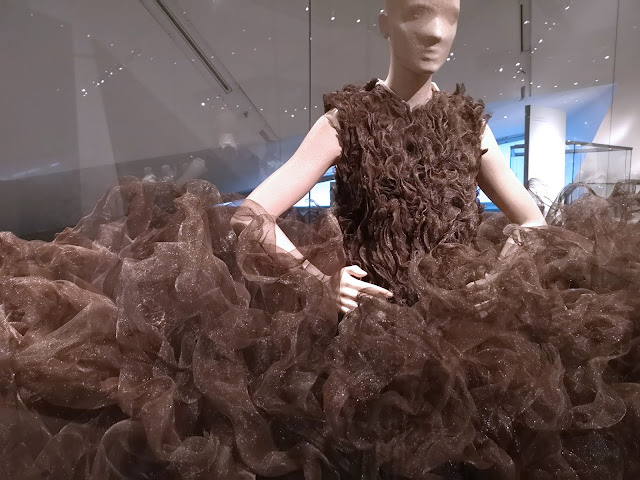 Dress from the Refinery Smoke collection, 2008, inspired by texture and elusive quality of industrial smoke.  The dress is made from metal gauze that is initially silver in colour, but over time, oxidizes to the reddish brown colour seen here. 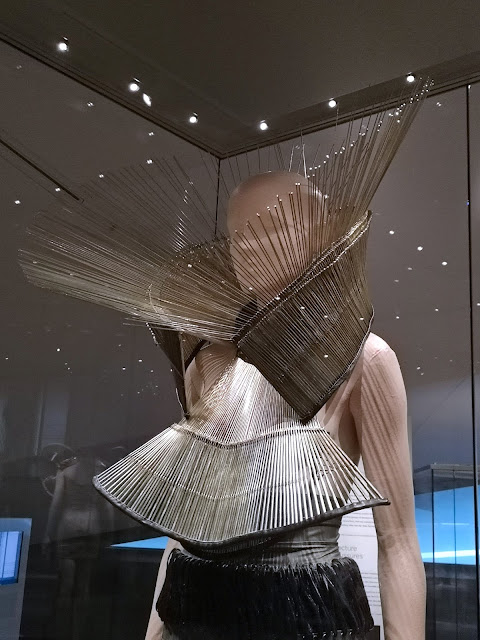 Collar made from the metal ribs of children's umbrellas, from van Herpen's first major collection in 2008, titled Chemical Crows.  The pieces were crafted entirely by hand and feature shapes that suggest the wings of birds (hence the title).  Herpen has said that she doesn't sketch her designs first, instead, she begins by working with the material itself and shaping it on a mannequin.


"for me, fashion really became a language to express the relationship between the insides and our outsides.  To not only go with the direct millimetre of our skin but also to explore the space next to that."
Iris van Herpen 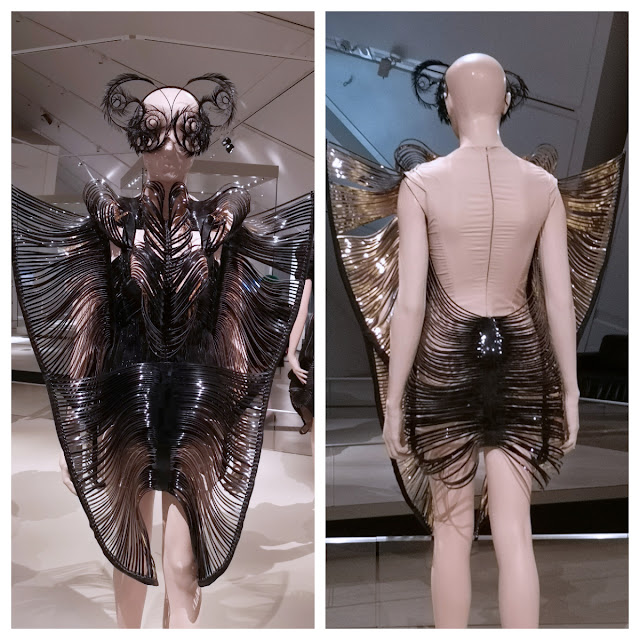 Most of van Herpen's creations seem designed for making their maximum impact upon entering a room, as the backs are often more utilitarian than decorative, as seen in the piece from her Synesthesia collection above.  Most likely this is to allow whomever is wearing the dress to sit down, or at the very least, lean against a wall.  The piece is made from leather, gold foil, metal eyelets and cotton. 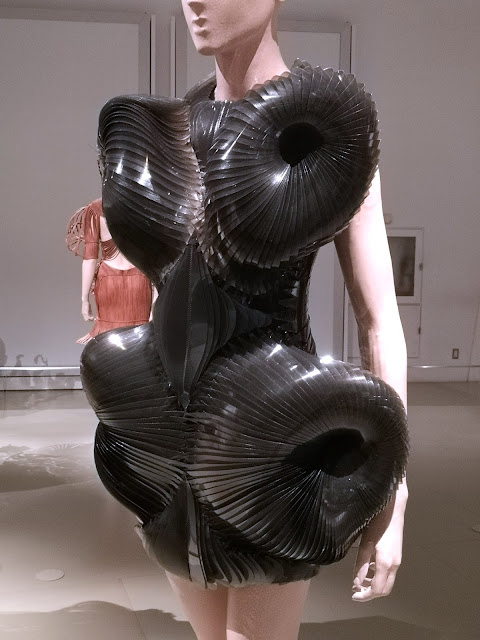 dress made from transparent black acrylic sheets from the Escapism collection 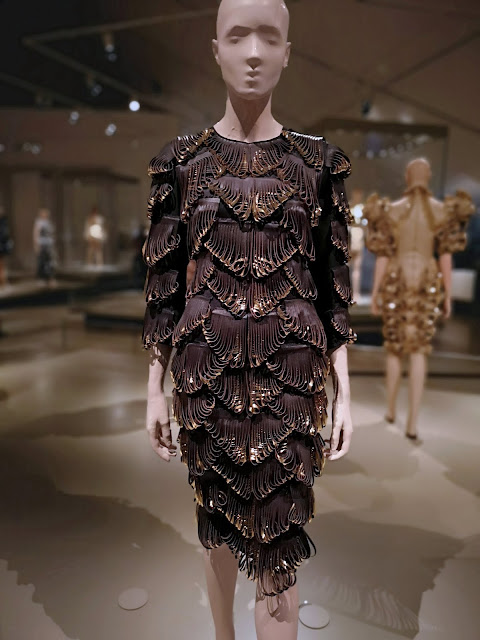 Another piece from the Synesthesia Collection, made from leather embellished with gold foil.  The base layer of the dresses (usually made of cotton or silk) is often a rather conservative shape - close-fitting, knee length, high neckline - but is is the exquisite detail work in the embellishments that creates the "WOW" factor. The Mummification collection from 2009 reflects the designer's interest in the ancient Egyptian practice of mummifying their dead. The idea of being "wrapped" or "swaddled", figures prominently in pieces which were handcrafted from treated leather, thousands of eyelets, leather lacing, chain and metal balls. 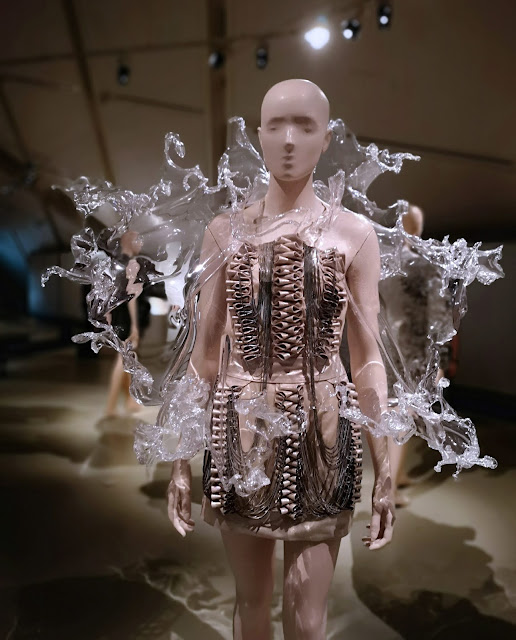 A dress from the Crystallization collection from 2010.  The transparent plastic collar that imitates a splash of water was created by hand using a hot air gun, a pair of pliers and polyethylene terephthalate (PET).  van Herpen is quoted in an interview stating that she hopes the exhibit "really shows the value of craftsmanship and how much more you can do with craftsmanship rather than only the traditional techniques.....the relationship between craftsmanship and technology is very important to me." 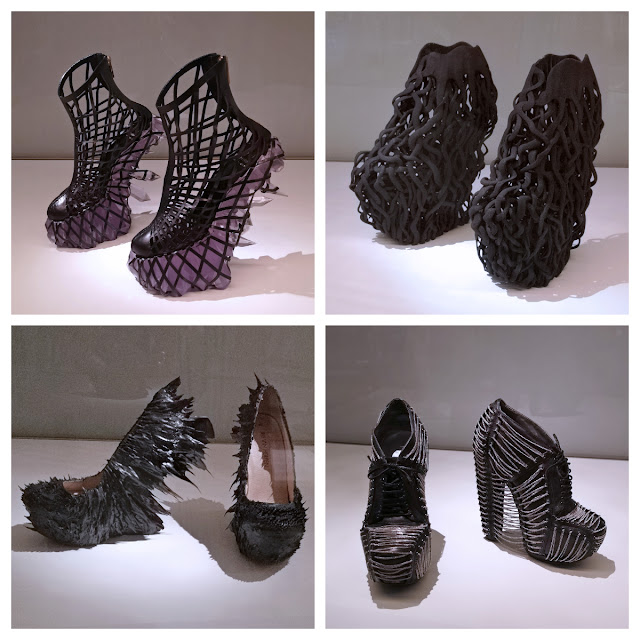 van Herpen is fascinated by the architecture of shoes and has been creating custom shoe designs to go with each of her collections since 2010.  Clockwise from top left:  from the Hacking Infinity collection, laser cut leather, 3-D printed photopolymer and stereolithographic resin;  Wilderness Embodied, from 2013, made of rigid opaque photopolymer;  Crystallization, 2010, metal chain and leather; Magnetic Motion, 2014, the surface is iron filings, shaped with magnets, and coated with polyurethane resin 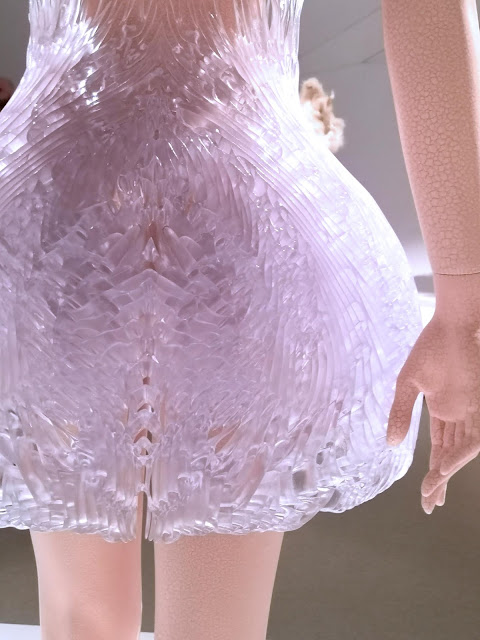 van Herpen believes it is important to collaborate with artists in other disciplines.  Italian architect Niccolo Casas collaborated with van Herpen to draw the 3-D design for a dress that represented the crystallization of water into ice.  The front and back of the dress snap together, and this detail photo shows how successfully the company who made it (3D Systems) were able to produce a dress (even though they originally told van Herpen that it was not possible to do what she asked) that looks like it's made of ice. 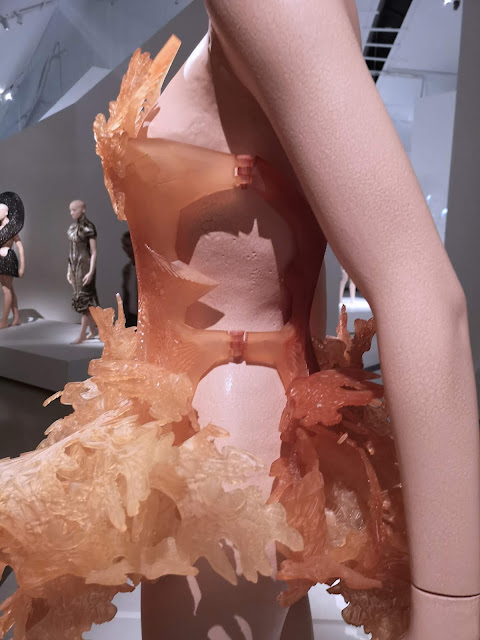 One of van Herpen's 3-D printed garments from her Hybrid Holism collection, showing the side hinges which allows the piece to enclose the wearer.  The collection was inspired by Philip Beesley's work, Hyzolic Ground.  Hylozolism is the ancient believe that all matter is in some sense alive.


van Herpen's connection with architect Philip Beesley began when she saw Beesley's project for the 2010 Venice Biennale of Architecture, which then inspired one of her collections, Hybrid Holism.  Beesley saw her designs online and an amazing collaborative relationship was formed.  Both are fascinated with the intersection of technology and the organic, and imagine designs that react to the energies of their environment.  They have developed 3-D fabrics that respond to the wearer's body movements through dynamic vibration.  van Herpen explores this in her Voltage Collection, with which she attempts to portray the unpredictable movement and power of electricity. 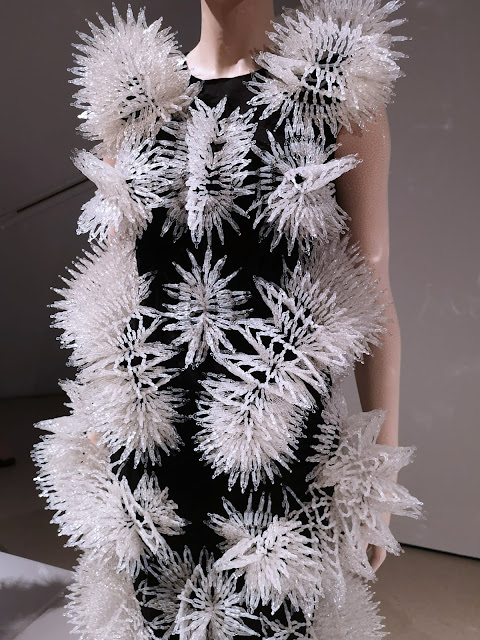 Detail of Voltage dress, created in collaboration with Philip Beesley, made of laser-cut transparent acrylic, silicone chevrons and microfibre.  Beesley has collaborated with van Herpen on 10 collections since 2012. 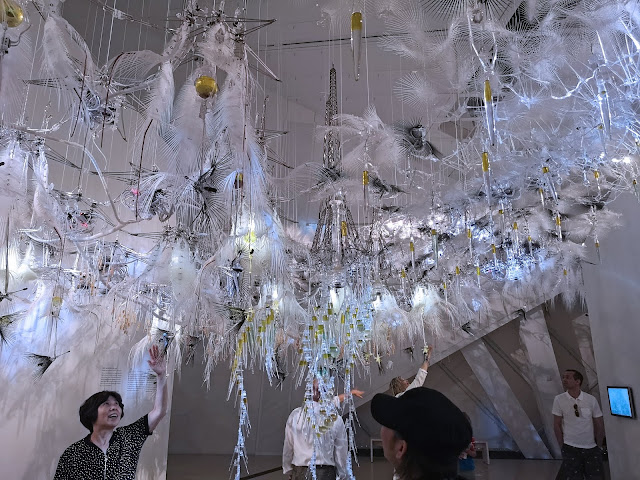 Philip Beesley's architecture studio, Living Architecture Systems, incorporates similar forms made of laser-cut 3-D polyester and acrylic forms in his installation, Aegis.  The canopy contains clear vessels filled with liquid, lights, and mechanisms that makes it react to visitor's touch and presence, and appear to "breathe". 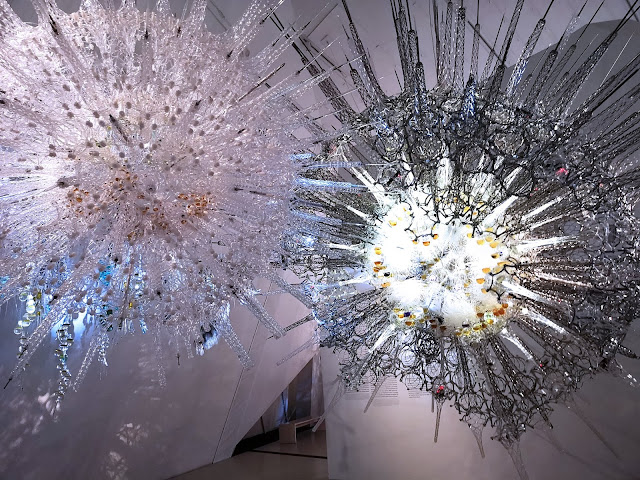 detail of the Noosphere, the other installation in Transforming Space 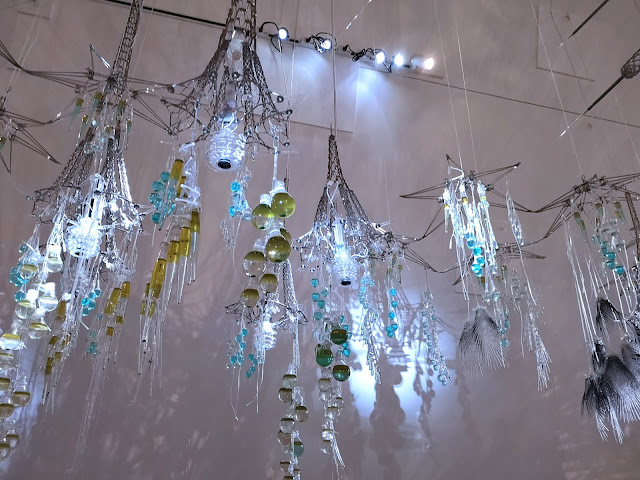 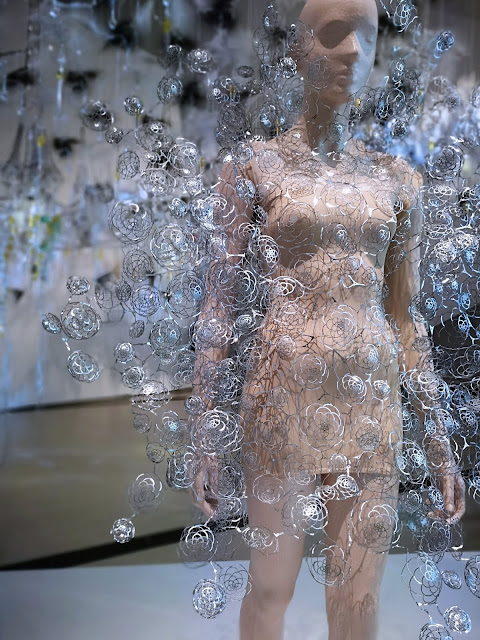 The Dome Dress, Beesley's and van Herpen's 11th collaboration, is an original commission for the ROM.  The dress is comprised of over 300 rosette-shaped, zinc-coated steel laser-cut forms which were hand-molded into three dimensional "domes" and is inspired by the idea of harnessing air and light around the body.


The Royal Ontario Museum is the last stop (and the only Canadian venue) on a two-year tour of this exhibit.  If you are curious as to where the future of fashion and architecture is headed, don't miss this exhibit, on until October 8th, 2018.

* The photos for this post were all shot on my new Huawei P20 Pro smart phone.  It was a test to see if a camera phone could do as good a job capturing sharp detail in low light conditions as my "real" camera, and I'm both happy, and a little sad, to say that it did.  If you're in the market for a new phone, and you want the one with the best possible camera currently available, this is the one.  This is not a sponsored post, I'm mentioning this because I'm truly impressed.
Posted by Forest City Fashionista at 7:26 PM 9 comments: