We all need to take some "me time" once in a while - time when the focus is on what you want to do; what gives you pleasure and feeds your soul.   As I'm a single woman with no children, one could argue that most of my life, outside of my job, consists of "me time", and they wouldn't be wrong, but in order to feel inspired and energized, I need to spend time away from the city I live in, surrounded by unfamiliar sights, and immersed in arts and culture.   And last weekend, I did just that. 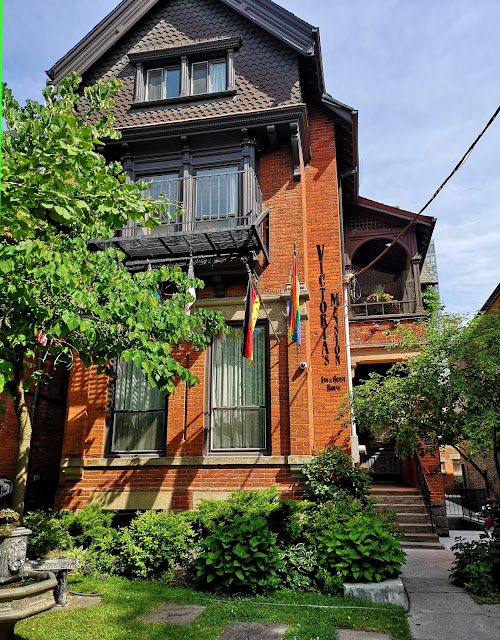 I booked a room at a guest house in Toronto called Victoria's Mansion, which is a short walk to the corner of Yonge and Dundas in the centre of downtown.  Built in the 1880's, the house is located on a quiet residential street and rooms have their own bathroom, air conditioner (which was important as the temperatures hovered around 35 degrees celsius when I was there), fridge, microwave, coffeemaker, wifi, and TV. 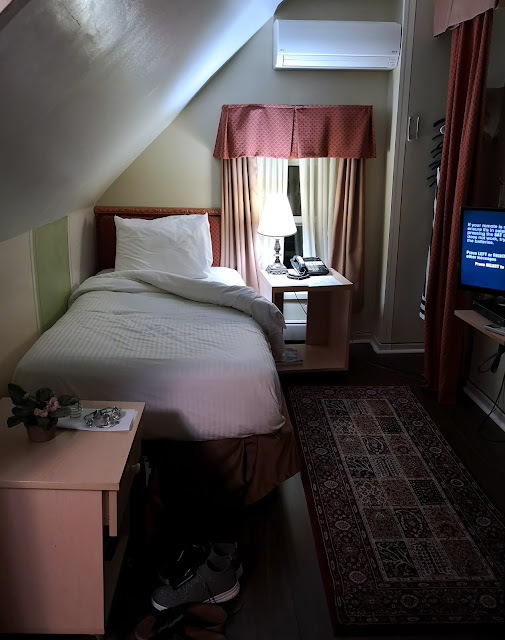 Personally, I loved my little nook on the third floor (there are no elevators, so if you have a lot of luggage that may be an issue).  The rooms are all different, and I noticed that some guests commented on travel sites that their bed was uncomfortable.  I didn't have that problem, but then, it depends on your expectations.  I have stayed in rooms in people's apartments in New York, so I can be satisfied with accommodations that are less than luxurious. I loved the tile in the shower, but if I had been drinking the night before, I may not have felt the same way about it if I had to face it while hungover in the morning.  The angled ceiling could be dangerous for someone who was taller than I am (5' 8"). 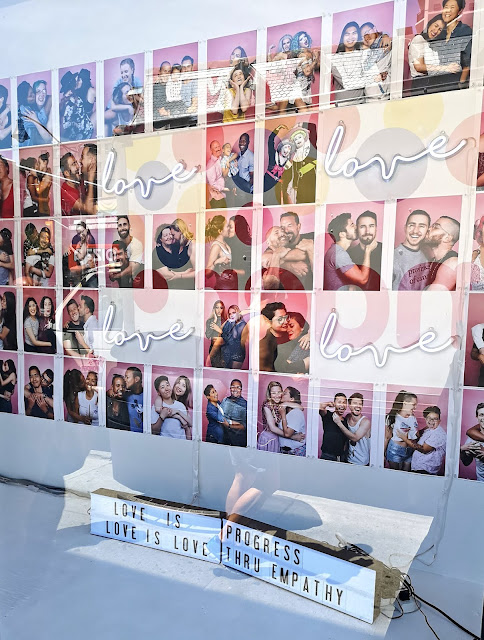 Victoria's Mansion is in the area of Church and Wellesley, which is the heart of Toronto's gay village so there were lots of restaurants and bars close by, and rainbow flags were everywhere. 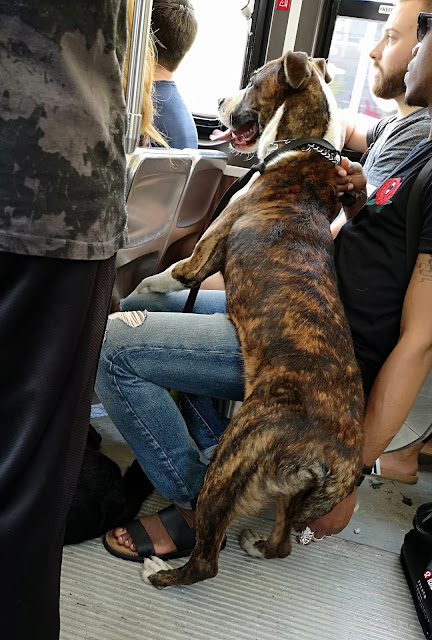 a happy pup on the streetcar

So, what did I do on my little adventure?

Every year I purchased tickets to at least one event during the Luminato Festival  in Toronto, which is an annual arts festival featuring music, dance, theatre, film, talks and more.  There are always more things I want to see than I can get to, and often the performances/performers are unknown to me, so I randomly pick things that sound interesting.  This year I had a ticket for a performance entitled The Fever, by an experimental theatre company from New York called 600 Highwaymen, which incorporated the audience into a collaborative experience.   I enjoyed it, it pushed me out of my comfort zone, and left me feeling connected to the other audience members surrounding me. 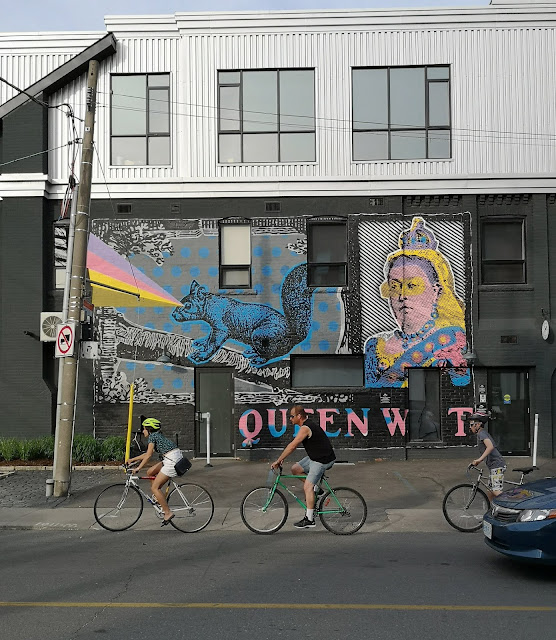 After a post performance cocktail and salad on the patio at the Drake Hotel, I headed to the Elgin Theatre for my second event of the day - a performance by the Malpaso Dance Company from Cuba. 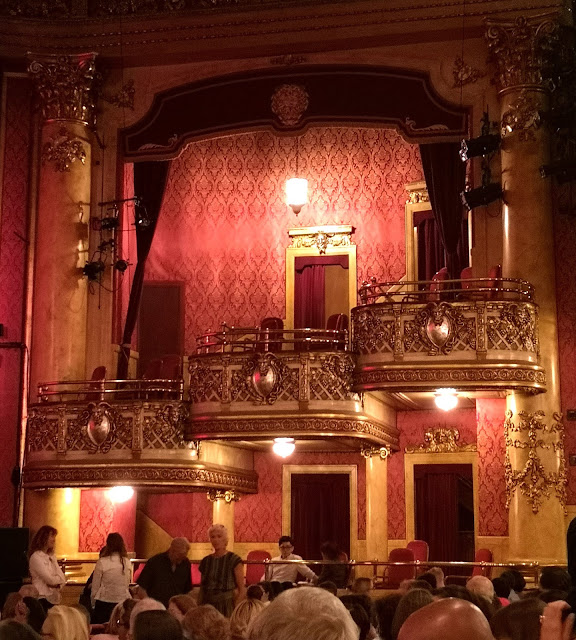 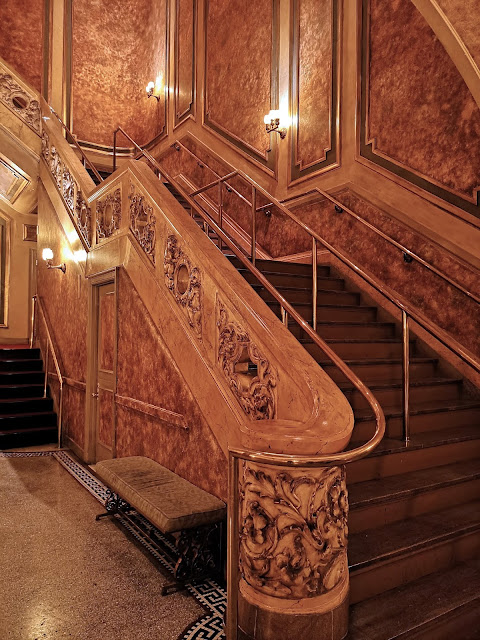 The grand staircase leading to the Winter Garden Theatre 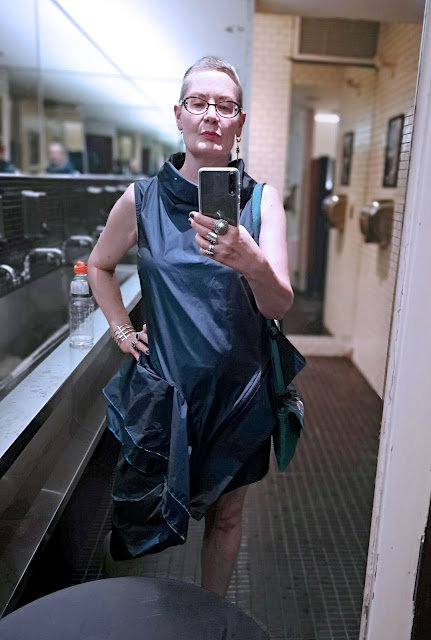 I wanted to wear something a bit fancy since it was a special occasion but as I had to wear it all day, it had to be comfortable for walking around in the heat.  I had purchased this dress at Cora Couture in Stratford several months ago and had yet to find the right occasion for its debut.   It's made of a thin, shiny, almost parachute-type nylon with an attached ruffle that can be unzipped.  It was comfortable and survived the bus trip to Toronto without turning into a wrinkled mess.

The Malpaso Dance Company, established in 2012, had performed to a sold-out audience at Luminato in 2015.  The company is committed to working with international choreographers and the evening's performance began with a work titled "Dreaming of Lions", choreographed by Osnel Delgado and set to music that was performed live by Arturo O'Farrill and the Afro Latin Jazz Orchestra.  The piece is based on Ernest Hemingway's "Old Man and the Sea" and if you are a fan of contemporary dance, you can watch the piece on YouTube via the link above.  The 11 dancers in the company alternate between strong and sensuous,  fierce and fluid, and precise and passionate and it was a thrilling evening of exceptional dance. 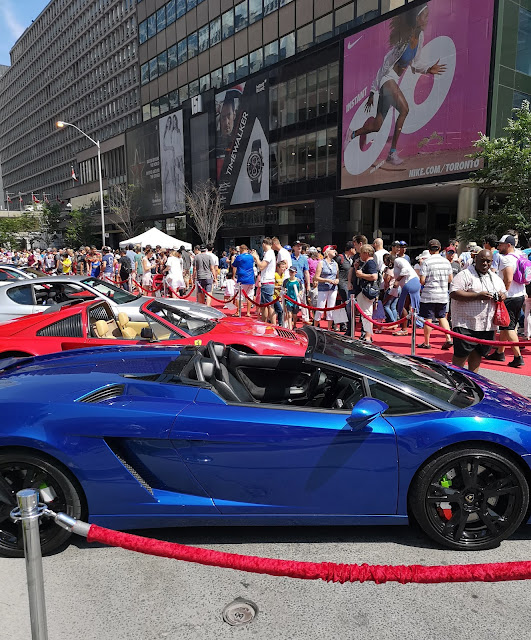 Sunday was Father's Day, and crowds of Dads and their families gathered to gawk at the expensive automobiles on display at the Yorkville Exotic Car Show.

On Sunday I had a ticket to see two new exhibits at the Royal Ontario Museum,  Iris Van Herpen: Transforming Fashion and Philip Beesley: Transforming Space 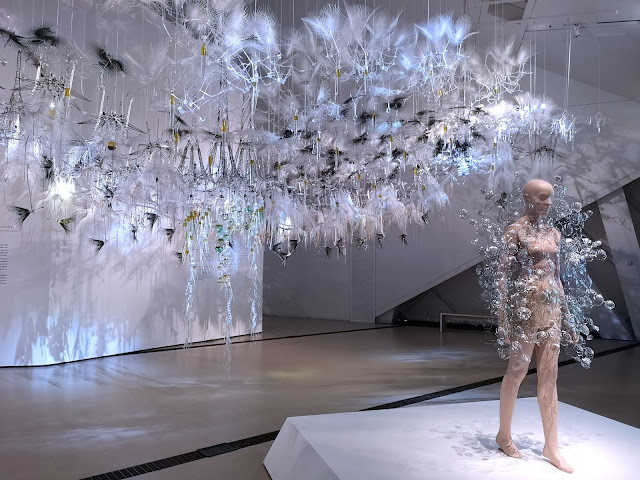 The above photo shows one of Architect Philip Beesley's installations, Aegis, and the Aeriform Dress, a collaboration with designer Iris van Herpen.  This is just a teaser until I get my post about the exhibit up later this week.  Trust me, it's mind-blowing.
Posted by Forest City Fashionista at 8:55 PM 11 comments: