Betwixt & Between the Monsters We Dream


I'm starting to accept that the month of January is a complete write-off, health-wise, for me.  Every year,  I head back to work after the Christmas break, determined to stay healthy, and every year, that goal is thwarted by the hoards of germs circulating on the bus and in the office, and my own crappy immune system.  This year, instead of the usual cold-that-becomes-pneumonia, I got the flu (I do get the flu shot every year). I missed a week of work, was exhausted for another week, felt human again and promptly got bronchitis.  I'm pleased to report that after a round of drugs, I'm pretty much back to my regular tired-but-not-sick self.  I was feeling so chuffed about not hacking up my lungs that I went out, on a school night, to the opening of an amazing art show.

The Shadowood Collective is a group show held at The Arts Project, curated by Sarah Legault and Vincent Marcone (aka My Pet Skeleton) that celebrates the work of artists who take a walk on the dark side.  This year's show, titled "Betwixt & Between the Monsters We Dream",  features work by 23 artists, including Troy Brooks, Anita Kunz, Juliana Kolesova, My Pet Skeleton, Allen Williams, Ryan Price, Richard A. Kirk, Anthony Veilleux, Sarah Legault, Jeremy Hobbs, and Nidia Martinez. 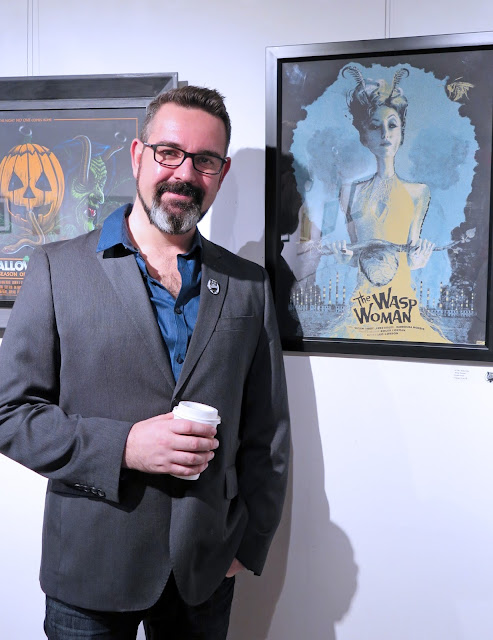 The show's co-curator, Vincent Marcone (who works under the name My Pet Skeleton) stands next to his poster design for the film, The Wasp Woman ( a real film from 1959 no longer covered by copyright laws) .  I commented to Marcone that the women in his art are always very beautiful, but with an edge of "creepy" that makes them look like they do not take shit from anyone.  He agreed that this was the look he was going for. 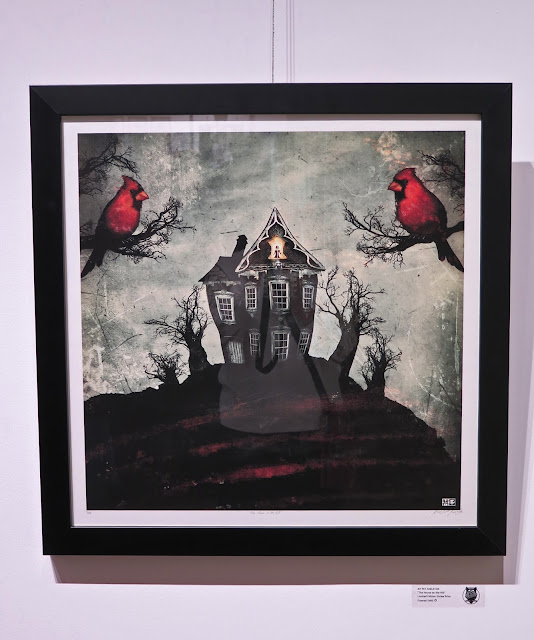 "The House on the Hill", by My Pet Skeleton.


In an interview with Tourism London,  Marcone commented that the work in the show is "whimsical, slightly gothic, and dark; but I think a lot of it lives in fairy tale." 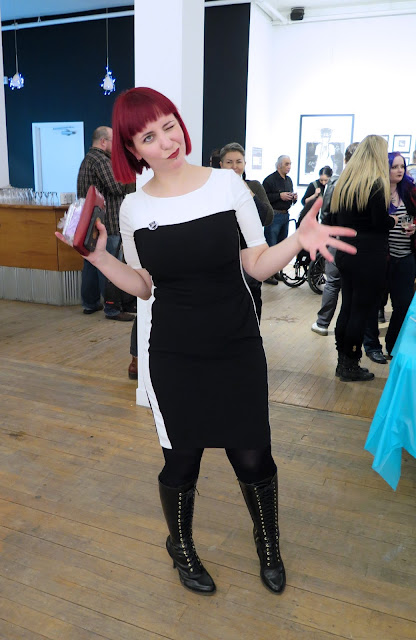 Co-curator Sarah Legault always looks so cool and composed when I have photographed her at events and this time I asked her to relax a little. 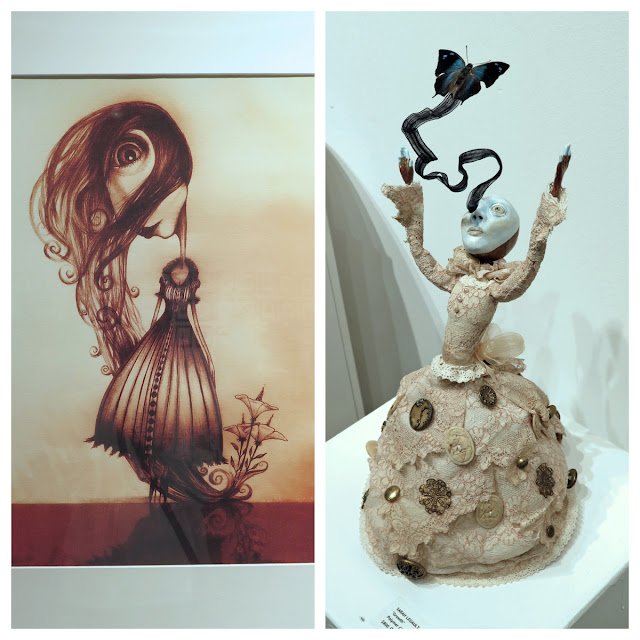 Two of Legault's pieces in the show:  on the left, "Red", and on the right, 'Growth", a polymer clay and mixed media art doll. 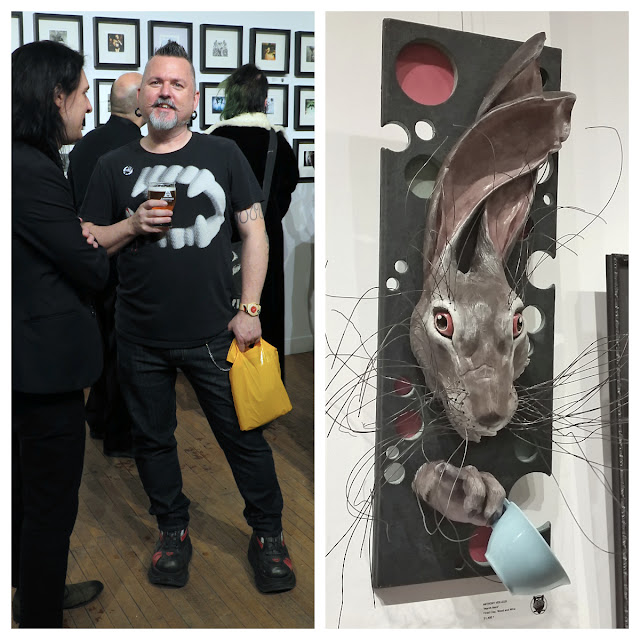 Anthony Veilleux (the guy with the teeth on his shirt) is a talented local artist who works in many mediums, including sculpture, drawing, painting, special effects makeup for film and television, and tattoo ink.  On the right is one of his sculptures in the show, "March Hare". 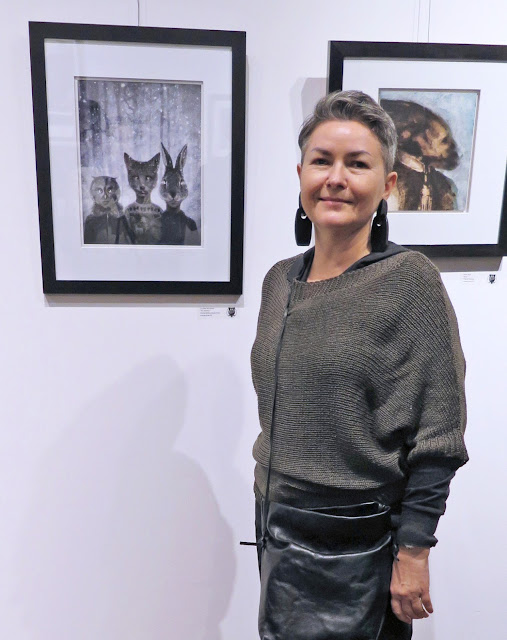 As much as I'm not a huge fan of parties, I enjoy going to art exhibit opening events for the opportunity they give to chat to the artists.  I had admired Juliana Kolesova's piece "The Children" (on the wall to her left) and purchased the smaller version from the wall of miniatures early in the evening.  When I saw a very stylish woman wearing fabulous earrings and Trippen boots, I stopped to admire her outfit and learned she was the artist of the piece I had purchased. 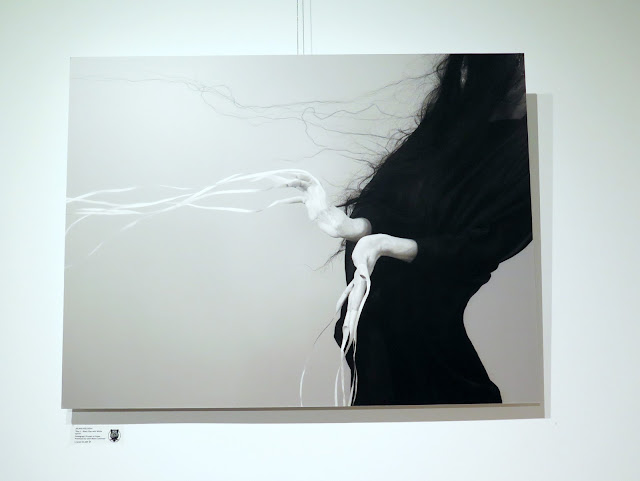 Another piece of Kolesova's work from a series of photographs inspired by ethnic spiritual dances, "BLACK PLAY WITH WHITE SPIRITS".

The Shadowood Collective exhibit (there have been 7 previous shows in the series) is one of my favourite shows hosted by The Arts Project.  The caliber of the work, combined with the gothic, almost fairytale-like themes, means there are usually quite a few pieces I would like to be able to take home with me.  Almost half the exhibit consists of a wall hung with 90, 3.75" square, framed miniature prints that are priced at $50 for the framed piece, or $40 for the print alone.  This is an excellent idea as it means that one doesn't have to forgo paying the rent for the month in order to take home a piece from a favourite artist. 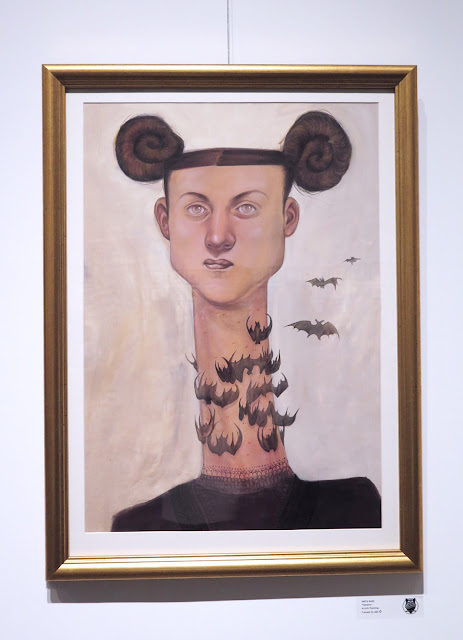 Another one of my favourites - "Vampire" by Anita Kunz, whose work has been seen on the covers of publications like Rolling Stone, The New Yorker, Time,  and Newsweek.  Her work has also been exhibited in group and solo shows around the world, and in 2003, she became the first woman, and the first Canadian, to have a solo show at the Library of Congress in Washington, DC. 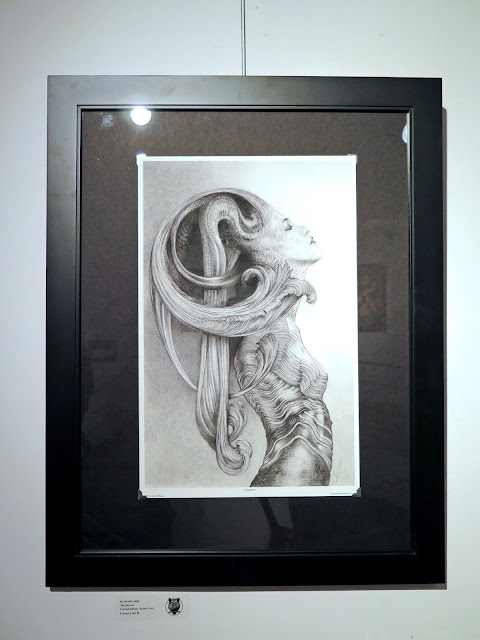 Award-winning illustrator, concept designer and fine artist, Allen Williams, created the piece above titled "Serpentine".   Williams' client list includes various film studios, book publishers, and even film maker Guillermo del Toro, who is a also fan of a number of other artists featured in the show. 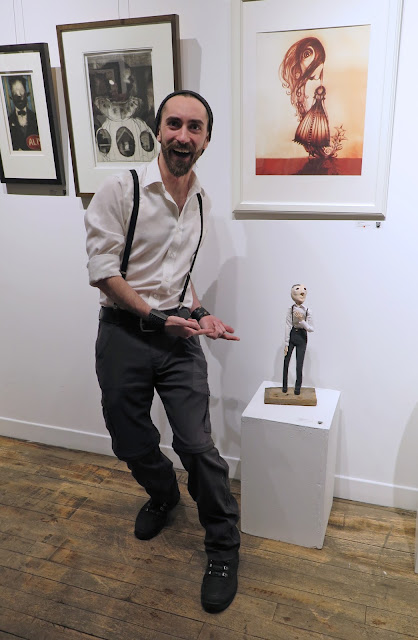 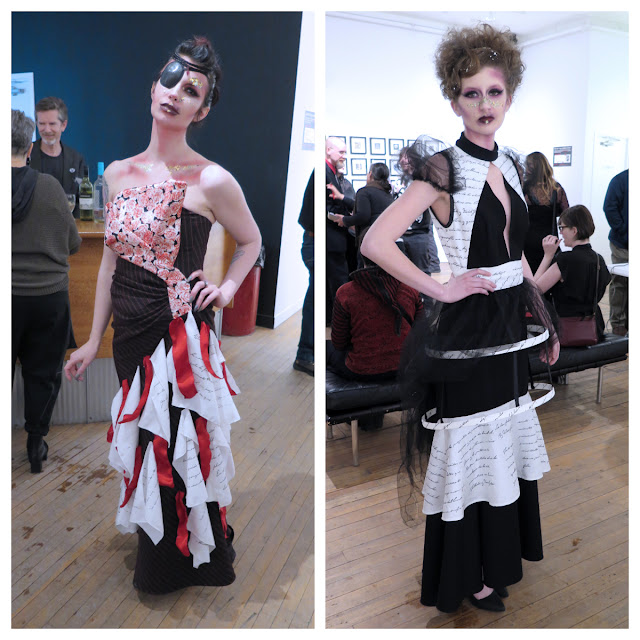 Nidia Martinez, who teaches in the Fashion Design Program at Fanshawe College, is also part of the Shadowood Collective and has created dramatic pieces of wearable art for previous shows.   Some of the pieces created for this year paid tribute to the designer's cousin, an author who passed away last year.  Martinez included handwritten pieces of text from her cousin's published work on pieces of fabric incorporated into the designs. 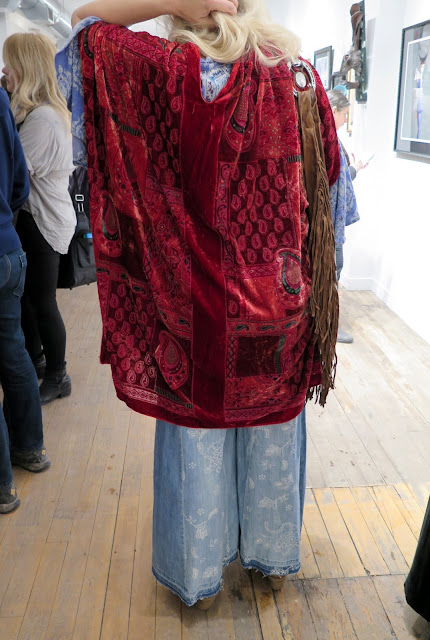 In a sea of mostly black, this woman in her red velvet shawl and various shades of blue made a lovely pop of colour.  I later discovered that we knew each other, and that her husband had purchased one of my favourite pieces in the show as a gift for her. 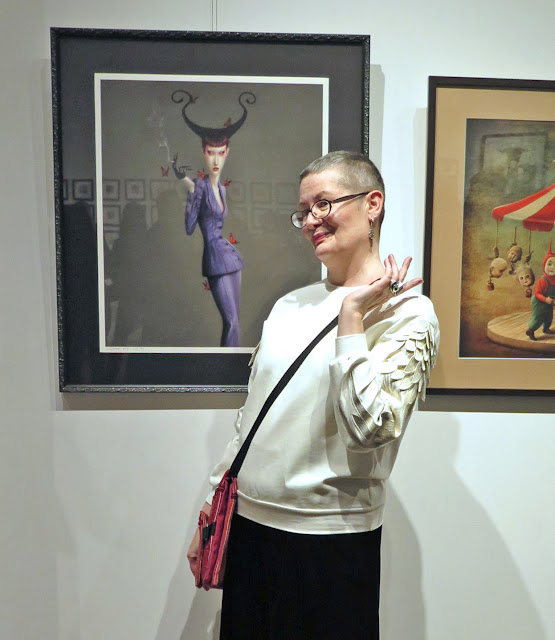 Here I am in front of the piece by Toronto artist Troy Brooks, titled "Bumble Sonnet for Saint Lucifer", that I loved, and is now owned by the woman in the previous photo.  His pale, elongated, and rather haughty-looking women are a signature of his work.  I'm attempting to emulate the elegant hand pose of the subject in the painting, at the same time, showing off the sleeve of my thrifted top which is embellished with embroidered "feathers".

Betwixt & Between the Monsters We Dream is at The Arts Project in London, Ontario until February 17th.
Posted by Forest City Fashionista at 5:55 PM