At Home With Monsters 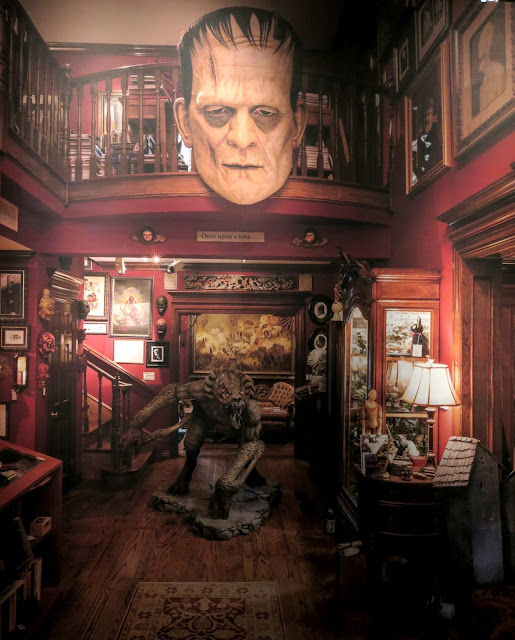 This wall-sized photo of the entrance hall of Mexican filmmaker Guillermo del Toro's home base greets visitors to the current exhibit at the Art Gallery of Ontario, Guillermo del Toro: At Home With Monsters.   Del Toro's residence (which he named Bleak House after the novel by Charles Dickens), located in Los Angeles, is home to his vast collection of art, books, and movie props.

The only thing I knew about director, screenwriter, producer and novelist Guillermo del Toro before viewing this exhibit was that his films featured freaks, outsiders and monsters (some human, some not).  I had seen several films he has written and/or directed, such as Pan's Labyrinth, Hellboy and Hellboy II,  Pacific Rim, Blade II, and Crimson Peak.  The exhibit at the AGO features approximately 500 pieces from his personal collection of props, artifacts, art, and books and is a journey into del Toro's world of the things that move and inspire him. 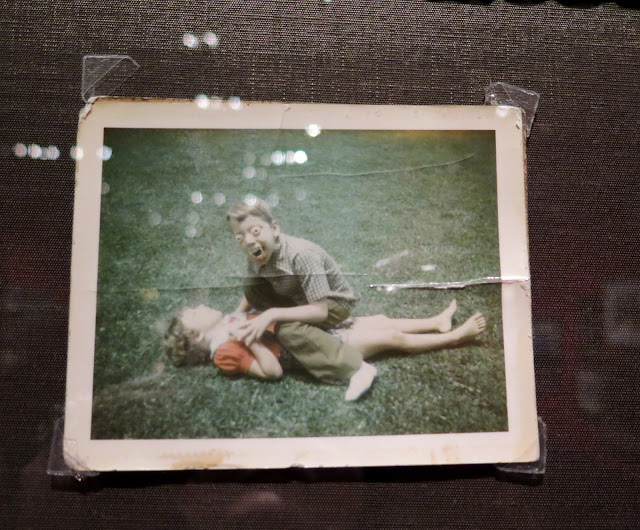 This photo of del Toro (age 10) wearing a monster mask, as he pretends to attack his sister, was an interesting personal addition to the exhibit.


The exhibit is organized thematically into different galleries, the first being Childhood and Innocence.   Children are often the central figures in his films, and they are usually much smarter and more aware of what is going on around them than the adults.  In my favourite del Toro film, Pan's Labyrinth, a young girl meets several strange and magical creatures, including.... 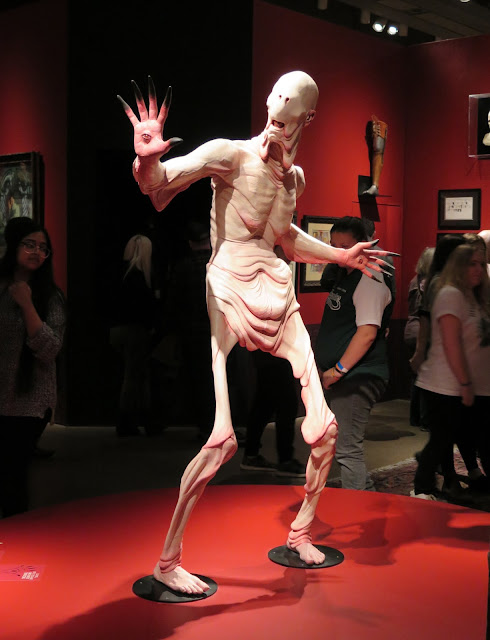 The Pale Man, one of the creepiest creatures to appear in Del Toro's films 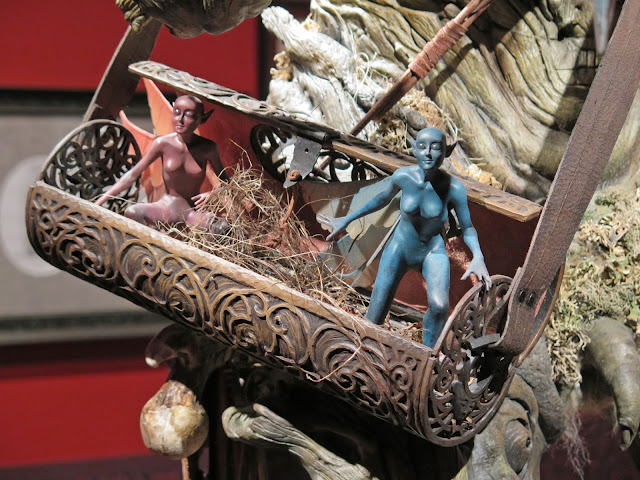 The lifesize silicone and fibreglass models in the exhibit are amazingly detailed - above is the Faun's "Fairy bag" from Pan's Labyrinth.


Other themes include:  Victoriana, Insects, Death and the Afterlife, Magic, Alchemy and The Occult, Outsiders, and Frankenstein and Horror.  Del Toro is extremely well-read, and finds equal appeal in comic books and Victorian literature; both feature largely in the exhibit. 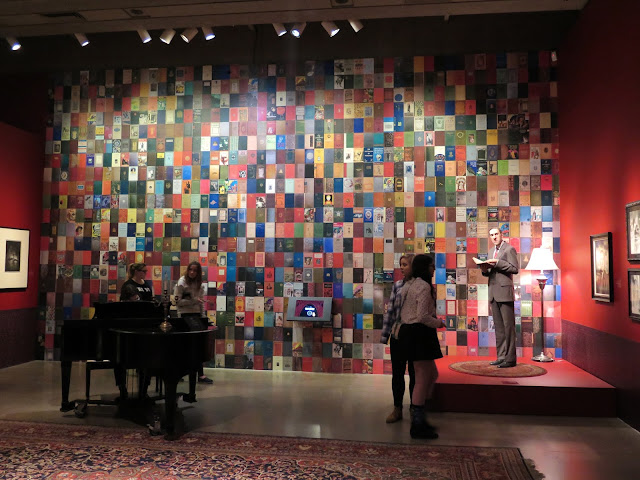 The gallery dedicated to Magic, Alchemy and the Occult features a life-size figure of author H.P. Lovecraft (a favourite of del Toro) and a re-creation of the author's library.  It also included a young man playing a grand piano which created a suitably eerie ambience throughout the exhibit. 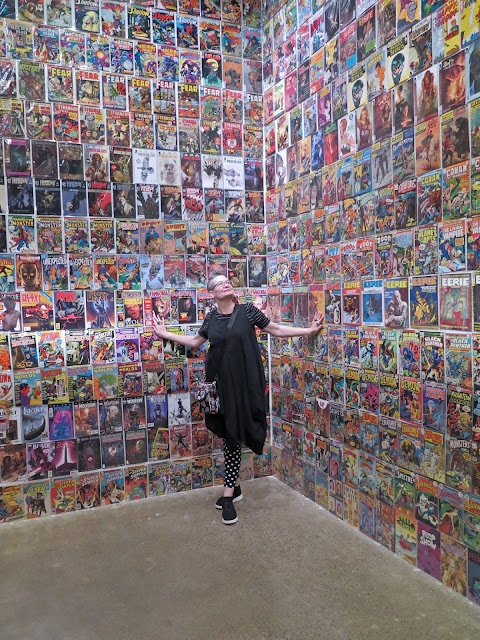 Yours truly in the comic book room, where the walls are covered with approximately 1,500 comics, on loan from Toronto comic shop, The Beguiling, where del Toro has been a customer for many years.   It is said that del Toro owns over 50,000 comic books. 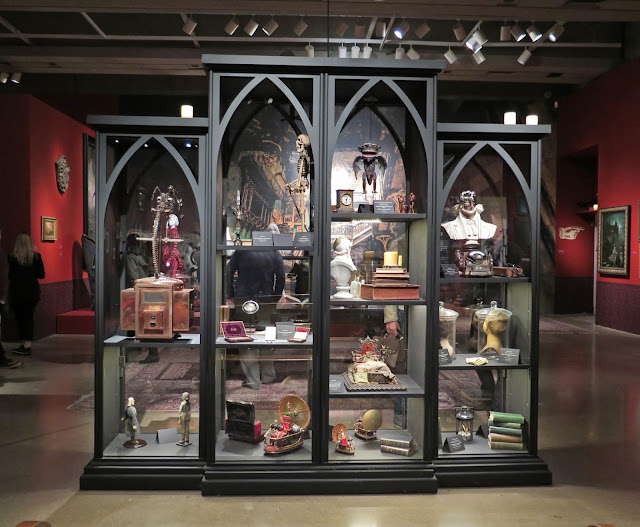 Large display cabinets like the one above contain items related to the theme of the specific gallery. 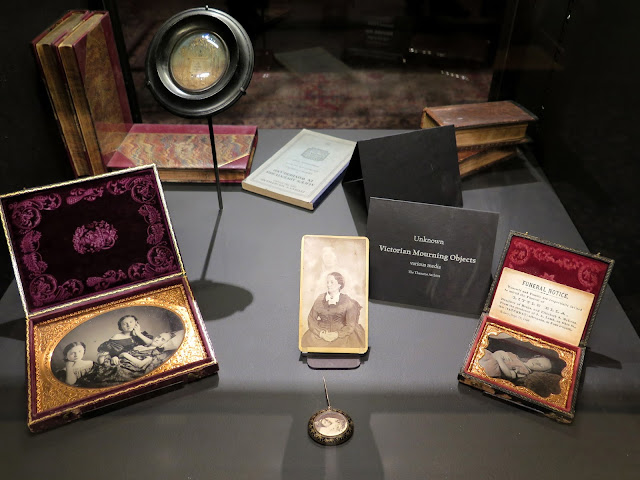 The cabinet above contained items from, or inspired by, the Victorian era, including these fascinating Victorian mourning objects. 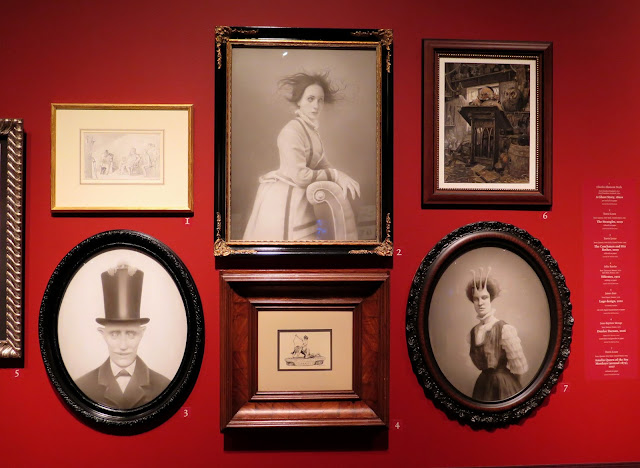 I was pleased to see that del Toro and I share an admiration for the work of New York artist Travis Louie   (the three larger black and white portraits). 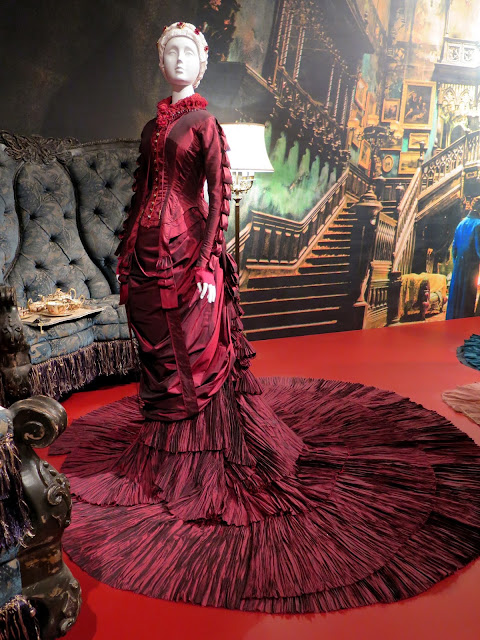 Above is a costume from Crimson Peak, a gothic romance set in the Victorian era. The colour red is a dramatic and significant colour in the film. 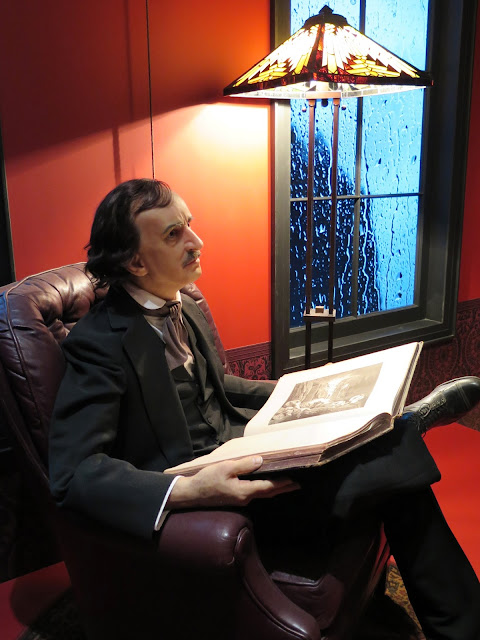 Del Toro's favourite space to work in Bleak House is his "Rain Room", a space that exists in a perpetual dark and stormy night.  Del Toro set up the projections and fake rain-splattered window himself.   A figure of author Edgar Allan Poe keeps him company in the room. 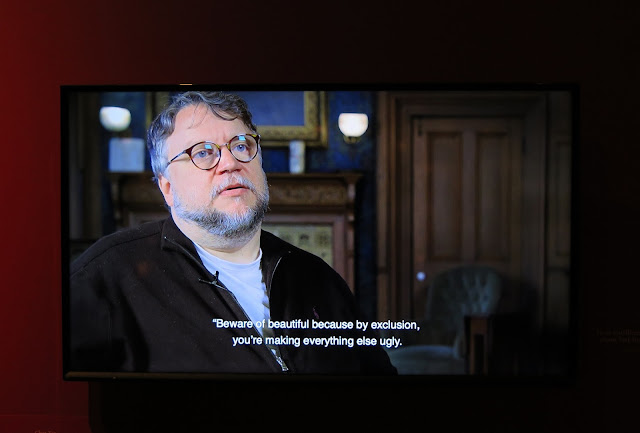 The Outsiders section of the exhibit includes a video of del Toro speaking about his attraction to outsiders, and the "other".  Del Toro's films feature terrifying visual monsters, but he believes that human beings can be the real monsters.  Tod Browning's 1932 film Freaks, which features real circus sideshow performers, is one of del Toro's favourite films.  It was the first film to explore a different take on the idea of the "outsider" and belonging.  In the film, so-called "normal" people behave monstrously towards people with disabilities. 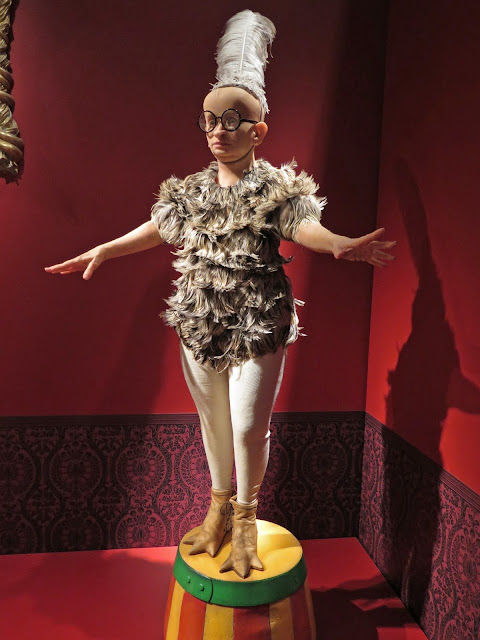 del Toro owns several life-size figures from Freaks, including this one, based on Minnie Woolsey, also known as Koo Koo the Bird Girl, born with a rare condition called Seckel syndrome. 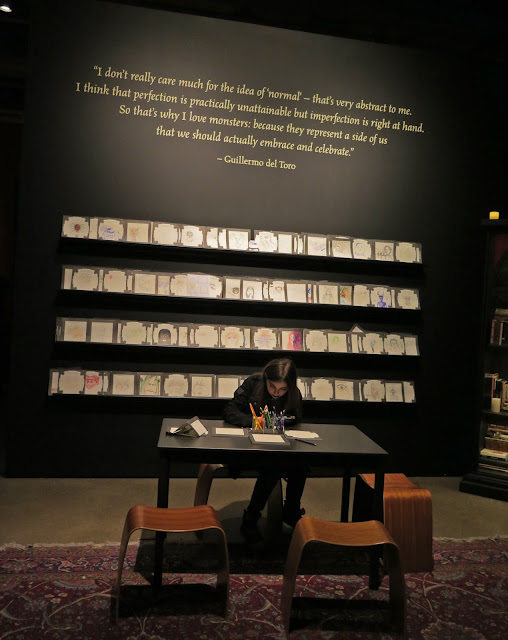 The exhibit invites viewers to add their own drawings and thoughts in answer to the question "What monsters do you embrace".

A large section of the exhibit is devoted to Frankenstein's monster, which is the most important monster in del Toro's life.  As a teenager, del Toro felt a deep connection to the Monster's outsider status.  The Frankenstein and Horror section includes the five foot long head of the monster made by Mike Hill that greets visitors to Bleak House, paintings, comic book art, and life size silicone figures. 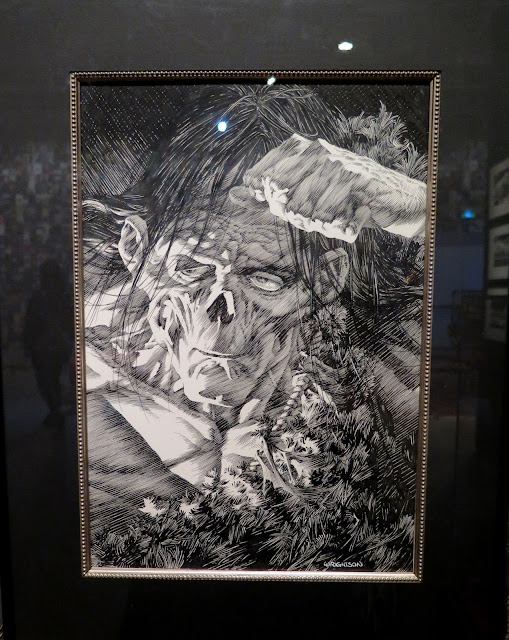 Artist Bernie Wrightson, who was the co-creator of the comic book character Swamp Thing,  spent seven years working on an illustrated version of Mary Shelley's Frankenstein; a number of his illustrations, including the one above, are on display. 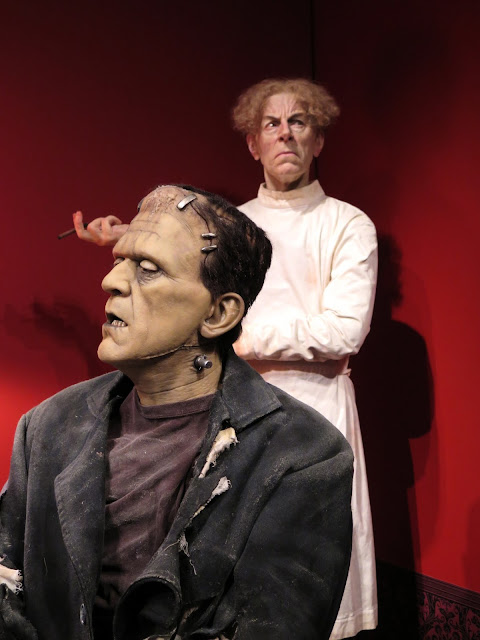 Detail from a tableau created by Mike Hill featuring the Monster, the Bride, and Professor Pretorius 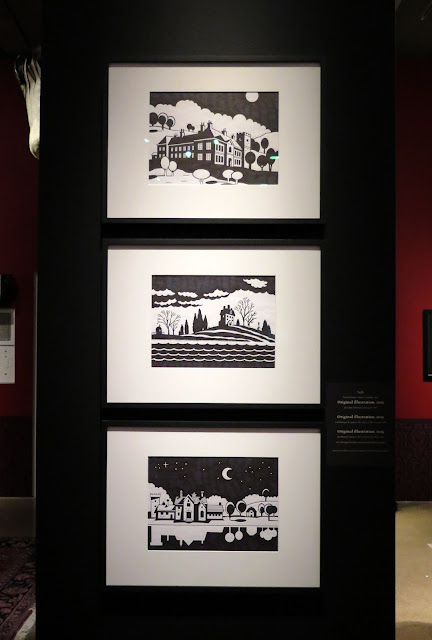 del Toro selected pieces from the AGO collections to compliment the exhibit, and it was cool to see that he included the above illustrations from local artist Seth, one of my favourite cartoonists.

There is so much to see - I spent over two hours wandering through the exhibit - and didn't spend as long looking at some things (like del Toro's notebooks from his films) as I would have liked.  There are televisions scattered throughout the exhibit showing clips from del Toro's films, and viewers are welcome to sit at the communal table in the comic book room and peruse a variety of comic books and copies of the book connected to the exhibit.  If you're a fan of del Toro's work, you'll love this exhibit.  If you haven't seen any of his films, but have an appreciation for the strange and the scary, you'll find lots of things to enjoy.


Guillermo del Toro: At Home With Monsters is on view at the Art Gallery of Ontario until January 7, 2018
Posted by Forest City Fashionista at 9:33 PM