When I was around 8 or so, I had a Brownie Box camera which I used to take photographs of the people (and a few animals) around me.  It was always disappointing when I would pick up the developed and printed photos at the drugstore and find that what I had seen with my eyes was not captured by the lens of the camera.  I wanted to make a record of the people in my life as I saw them, and at that age, I didn't have the eye, or the technical skill, to be able to do it.

I continued to photograph people throughout the rest of my life and the more I practiced, the more my photos improved, but it was still a challenge to be able to capture on film what I saw with my eyes.   I did event and wedding photography, and asked friends to pose for me.  For a while I had access to a darkroom, and experienced the delight, (and the chemical headache), of printing my own black and white photos.  I even purchased some used darkroom equipment with the idea of creating my own darkroom in my apartment, but it sat unused, and was eventually sold to a friend.  I enjoyed looking at other people's photography for inspiration, and attempted some landscape and "art" photography, but the only subject that really interested me was people.

I'm now on my third digital camera, and I love being able to see your images immediately, and not having to pay a fortune to have rolls of film developed and printed only to find that there are only two shots worth saving.  But I miss the tones and richness of black and white film, which in my opinion, can never be duplicated digitally, which is probably why I never shoot black and white anymore.   I still enjoy taking my camera (not my phone) to an event and revisiting my first love - photographing people, and capturing the play of light, shadow and colour.

So, after that preamble, I wanted to show you some photos I took of one of my favourite bands as they played at Sunfest last past weekend.  The band is DakhaBrakha, a folk/world music quartet from the Ukraine, who I have now seen perform a few times.  The band members play multiple instruments and have an astounding vocal range, and the theatrical elements of their performances make them excellent photography subjects.  It was an added bonus that the concert was at night, which allowed the band to make use of multi-coloured lighting and smoke effects.


Below is a video I shot of them in performance, which will give you an idea of why I'm such a fan. 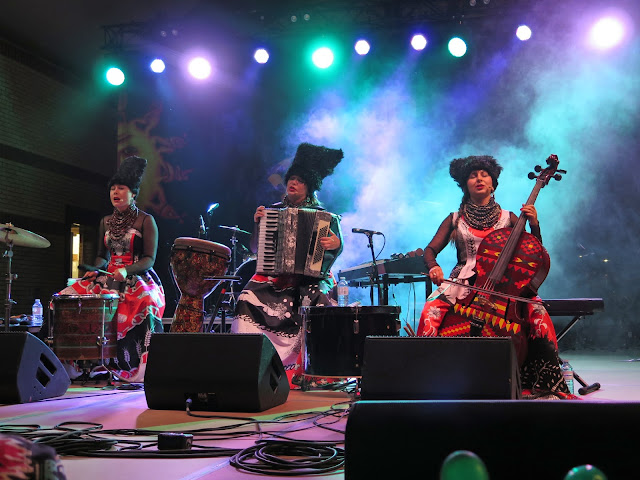 The three women in the band: left to right - Olena Tsybulska, Iryna Kovalenko, and Nina Garenetska 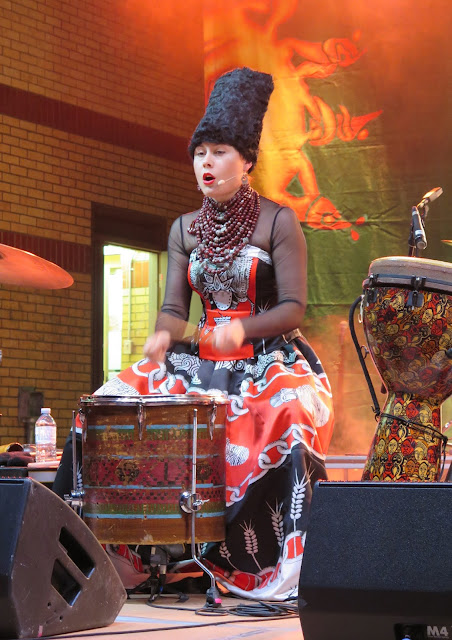 Oleana Tsybulska provides vocals and plays the bass drum, percussion, and the Garmoshka. 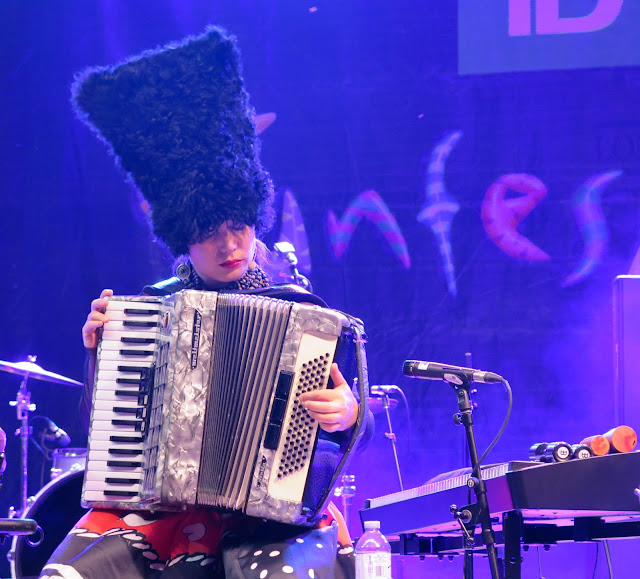 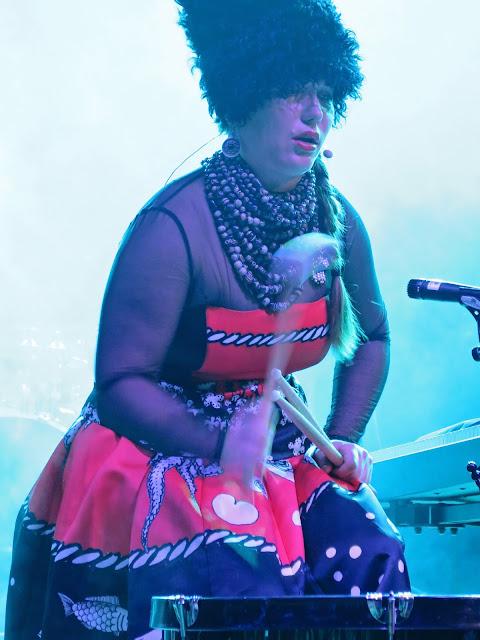 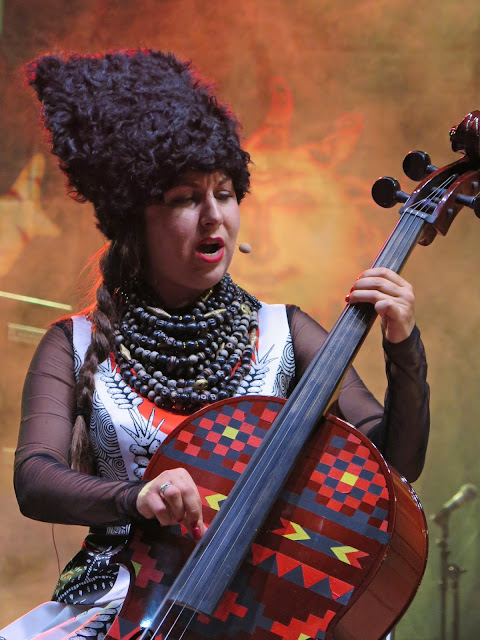 Nina also provides vocals and plays the bass drum, but her main instrument is her colourful cello which she plays with a bow and plucks with her fingers. 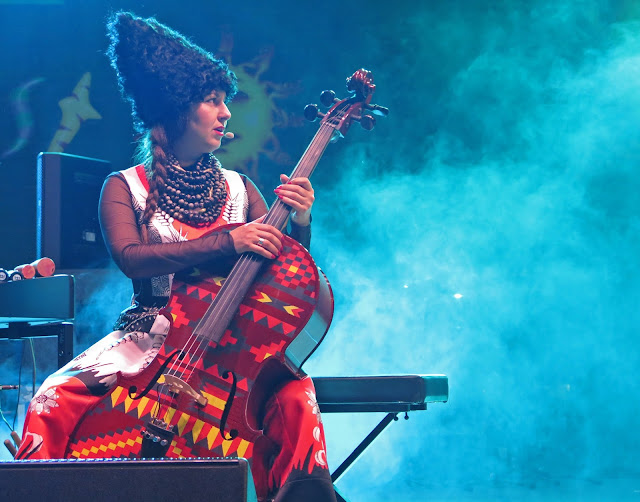 When the band performs, the women wear elaborate dresses, and their trademark tall furry hats.  This  year's boldly patterned costumes were very effective on stage. 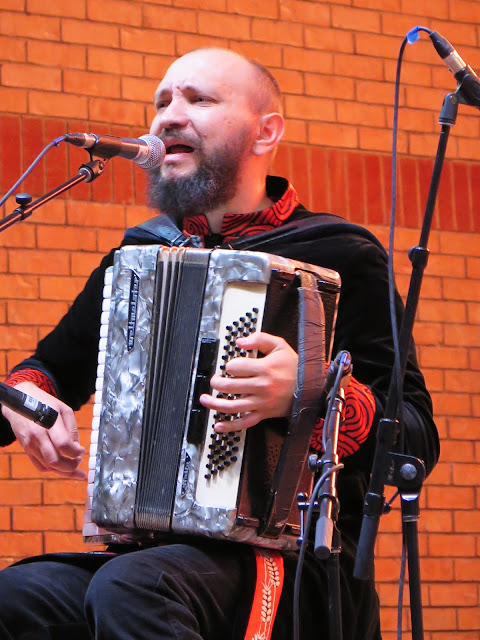 Marko Halanevych is the band's sole male member, and in addition to providing vocals, ranging from a deep, rumbling bass to a falsetto, also plays the accordion, tabla, didgeridoo, trombone and darbuka. 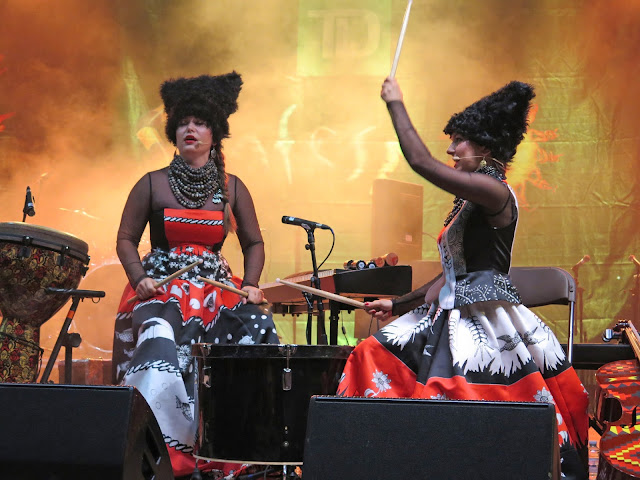 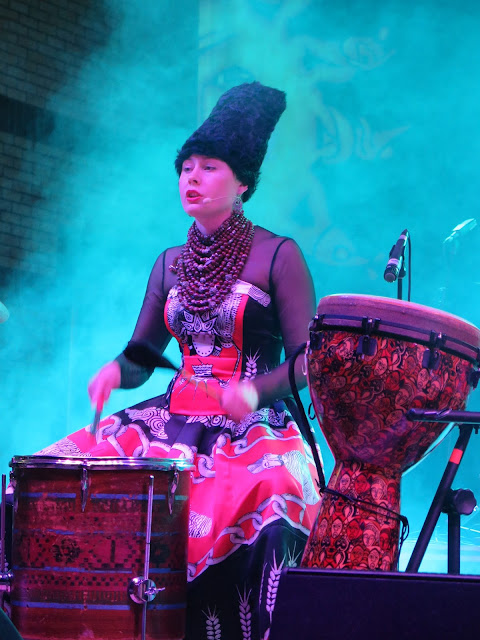 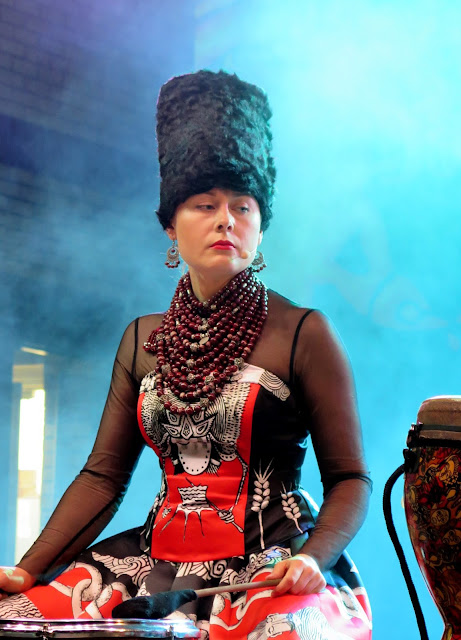 Olena is the most serious when on stage.  She maintains a kind of regal presence and rarely smiles. 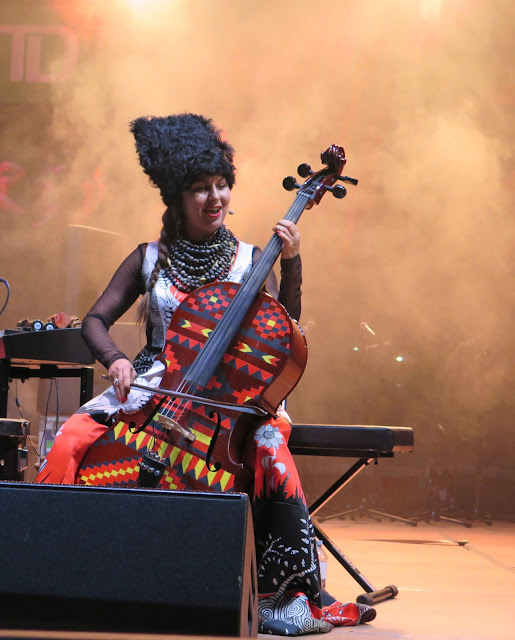 When performing, Nina is the most vivacious member of the group. 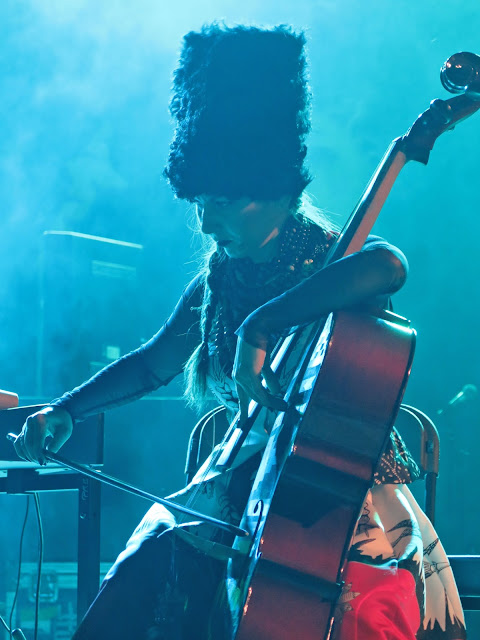 The shot above was my favourite from the evening and is the perfect example of what happens when light, colour, and form all come together at the right moment.  If I had used a flash, as many people in the audience were doing, I would have never got this shot. 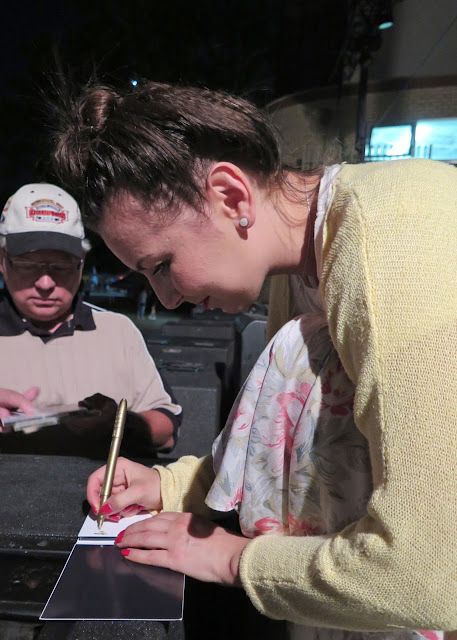 Nina came out to say hello, as we had spoken last time they played in London, and a couple of people asked her to sign copies of the band's CDs.  None of the band member speak much English, so we weren't able to have much of a conversation, but I managed to convey how much I enjoyed seeing them perform again.
Posted by Forest City Fashionista at 7:31 PM