I've been a fan of women's Roller Derby since I first saw London's Forest City Derby Girls play a match about 7 years ago.  I used to go to almost every home game, but I hadn't been to one in a while, so when The Timber Rollers had a game last Saturday night, I put on my red and black and headed to the Western Fair Progress Building to watch.   The Timber Rollers are one of three teams within the Forest City Derby League, and it happens to be the team that my bestie, Heather plays for.

In April 2011, I was getting ready to move into a new apartment.  I had only known Heather a short time, but she generously offered to help me move stuff in her car, and to thank her, I took her to a Roller Derby game.  She was familiar with Derby, but hadn't seen a match played live.  She was riveted, and right then and there she knew she wanted to play.  After the game she signed up for a "Fresh Meat" Training night.  The rest, as "they" say, is history.  From a kid with asthma, who wasn't able to participate in sports, to one of the strongest members of the team, the transformation has been incredible to watch, and I'm so proud of her. 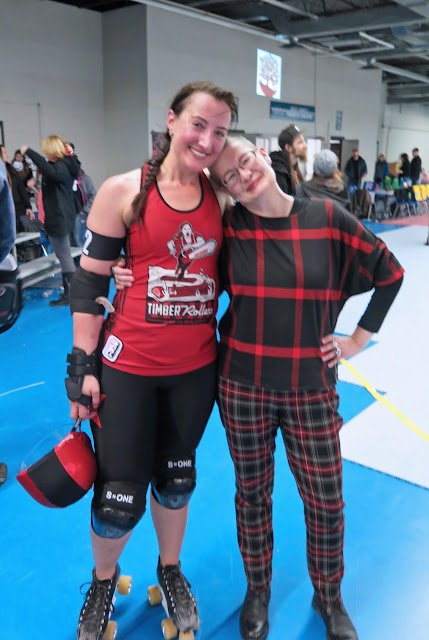 That would be Heather, aka #42 Torque, on the left, exhausted and sweaty after the match, and yours truly, in my version of the team colours.

If you've never seen a roller derby match, here are the basics:

A team consists of 5 players - 4 blockers and one jammer, who is the only player who can score points.  The jammers from the two teams line up next to each other on the jammer line, while the blockers from both teams position themselves in a "pack" in front of them.  When the whistle blows the two jammers fight their way through the other team's pack.  The first jammer to get through the pack is the lead jammer.  The jammers then circle the track and score one point for each member of the opposite team that they pass.  Each "jam" lasts for two minutes, or until the lead jammer calls it off.  Jammers need speed, stamina and strength, and must be able to negotiate turns and be knocked off balance without skating out of bounds.  Blockers need strength and strategy, and must always know where the other team's jammer is at all times, as it is their job to keep them from scoring points. 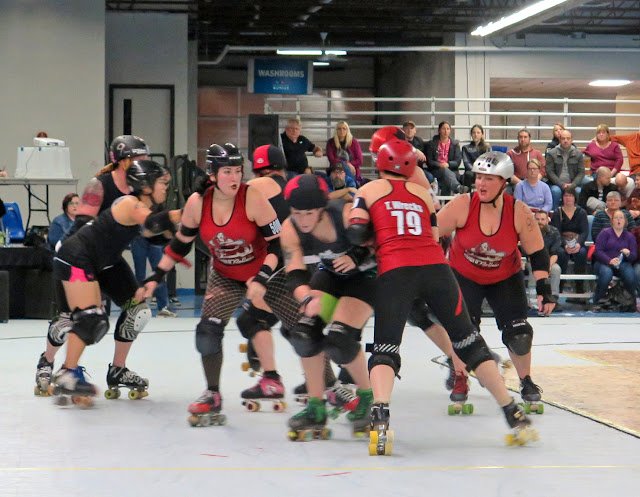 In the photo above, one of the jammers for the other team, the Frenemies (wearing black), identified by the star on her helmet, is trying to break through the Timber Rollers pack (in red and black). 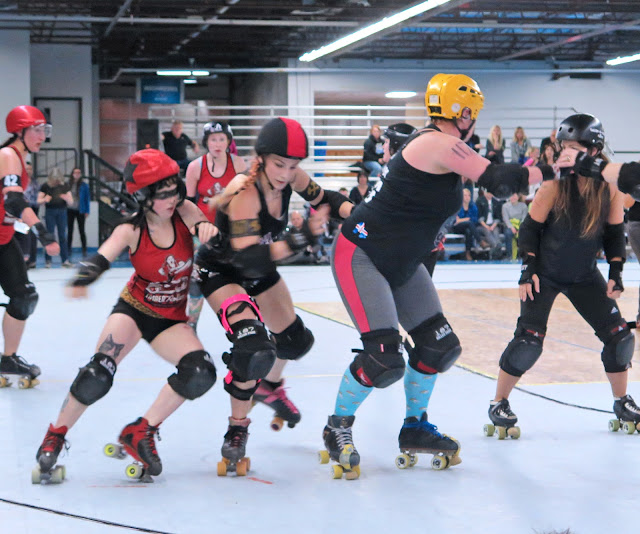 Being small and fast are assets to a jammer, and Drop Dead Alice, wearing red and black, is small but mighty, and is able to push her way through the pack to score points. 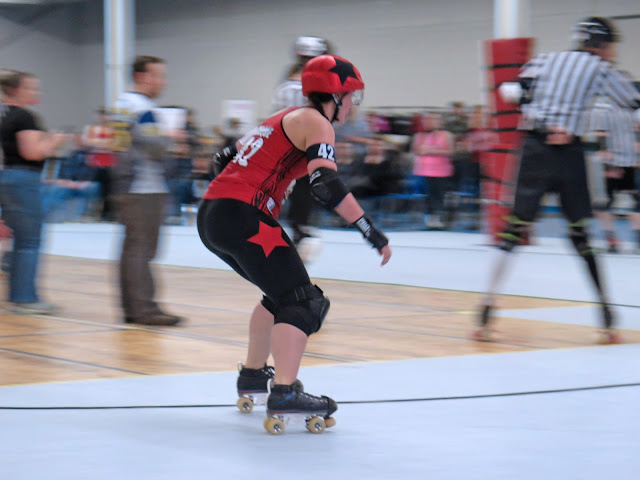 Heather is known for her strength, stamina and solid skating skills on the track.  In the photo above, she has broken through the pack and is skating around the track to come up behind the pack again. 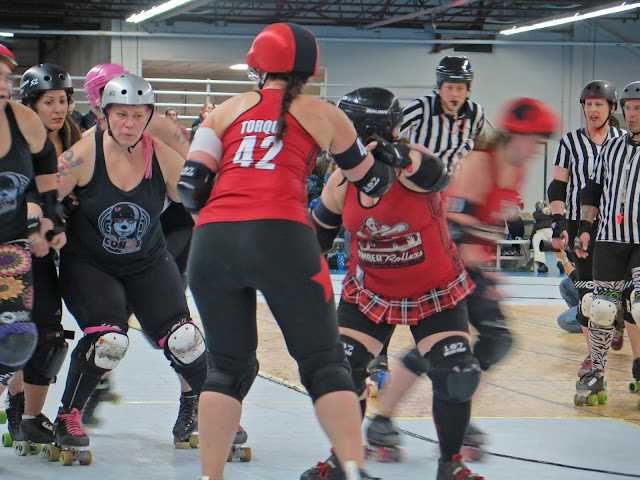 When she's not jamming, Heather often acts as a blocker.  In the photo above, she works with fellow Timber Roller, Lady T (in the plaid skirt), to block the opposing team's jammer. 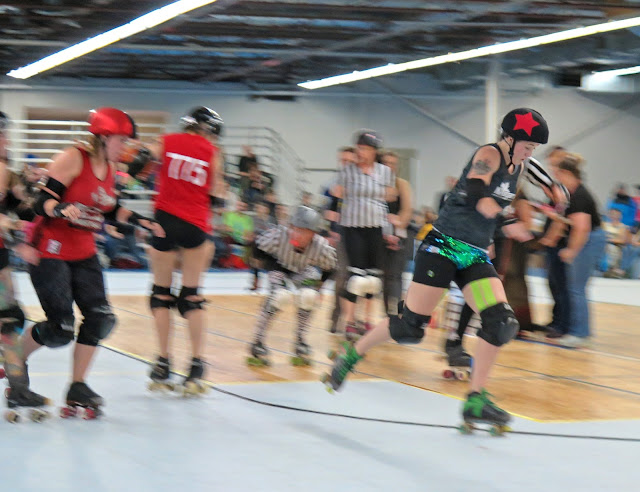 The Frenemies' jammer (in the green sparkly shorts) has pushed through the pack and is racing around the track.   She jumped out of the pack and I was surprised I was able to catch a shot of her in focus. 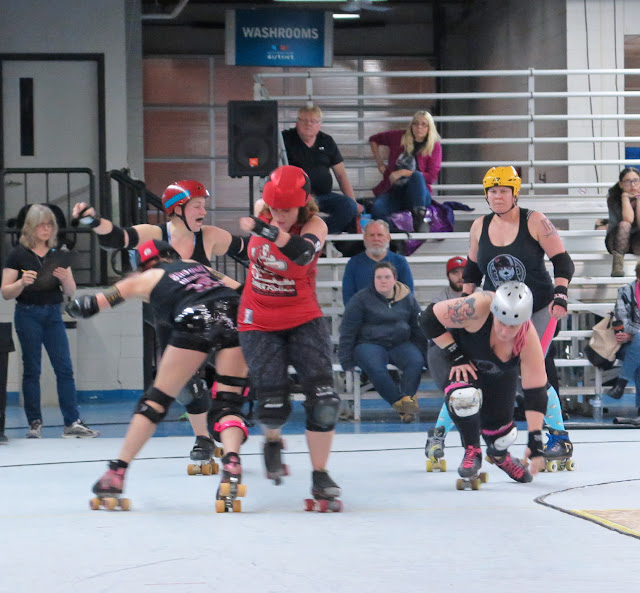 Derby is not for the faint of heart.  Players frequently get knocked down, and sometimes seriously injured.  Players have received concussions, even while wearing helmets, and have broken collarbones, ankles, etc.  Heather had her nose broken last year and now wears a helmet with a visor. 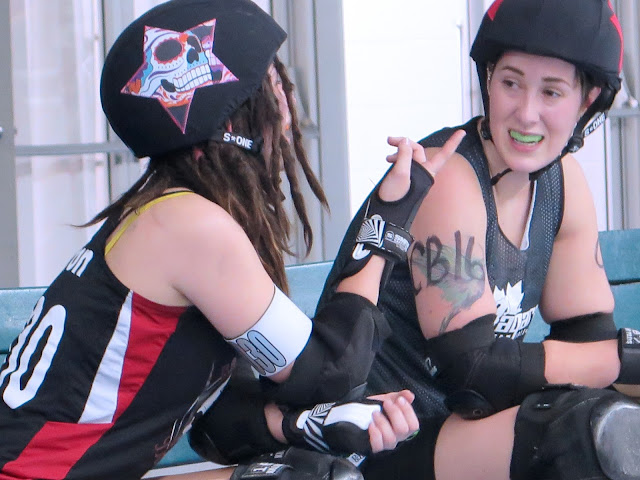 Derby is not all sweat and pain.  Being part of a team and supporting each other on the track forges a bond between players leading to friendships, and occasionally romantic relationships off the track.  At Saturday's game there was a marriage proposal from one player to another. 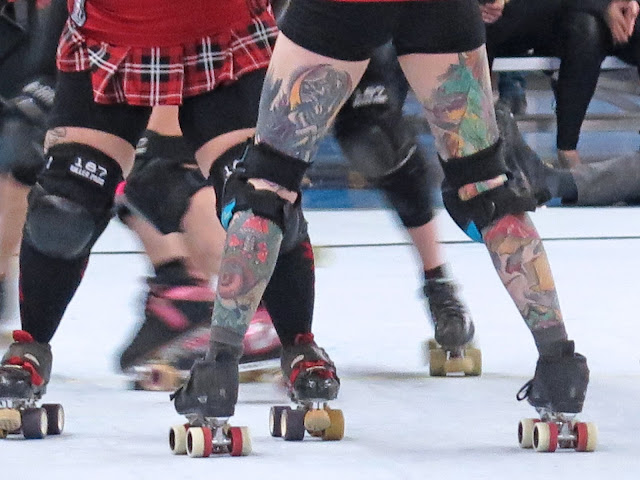 Roller derby is an inclusive sport - women of all ages, shapes, sizes, races and sexual orientation are welcome.   Many of the players have tattoos and piercings - the inked legs above belong to #17,  Low Key. 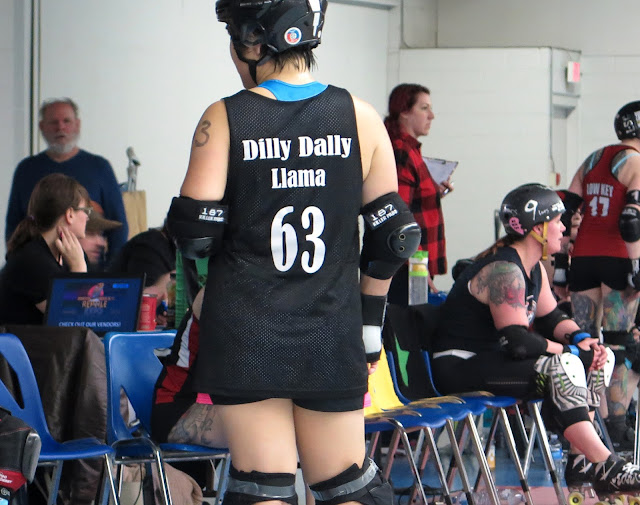 From the silly and/or witty derby names of the players, to the undeniable appeal of watching badass women in booty shorts knocking each other down, Roller Derby is very entertaining to watch, and draws fans of all ages.  Many parents bring their kids to the games, and it is so cute to watch little girls ask the players for a photo or an autograph.

Does your city have a Roller Derby league?  If so, check out one of their home games - you may find a new favourite sport, and leagues are always looking for new players.   If you're interested in joining the Forest City Derby Girls, you can contact them at info@forestcityderbygirls.com
Posted by Forest City Fashionista at 9:30 PM