*Warning: readers with a phobia of snakes should just scroll to the end of this post, unless you are freaked out by rats too, and in that case,  just look at the middle*


While there is some Irish in my family background, I don't celebrate St. Patrick's Day, never have.  I'm not certain when this happened, but it seems to have become a National Holiday for University students everywhere.  They skip classes and start drinking at the crack of dawn, and by nightfall, the streets are littered with noisy, sozzled, green-clad 20-somethings.

To avoid witnessing all that, after work on Friday I decided to head to the Western Fair District, where Little Ray's Reptile Zoo, Animal Ambassadors, and Little Tracks Petting Zoo joined forces to present "Diversity of Living Things" during March Break.  I thought that if I went over the dinner hour it wouldn't be as crowded with parents and their kids - after all, I was going so I could pet "all the things" and when you're a woman of a certain age, you don't want competition from some adorable little tyke when you're waiting in line to pet a lizard.   Upon arriving, I saw that I was the only adult there without a child in tow, which meant I spent a lot of time chatting to the volunteers who were very accomodating to my many requests  of "can I touch that??".

I wasn't a big fan of reptiles (snakes, lizards, etc.) when I was a kid, but as an adult, I conquered my fear of snakes after being able to touch them in controlled environments, and have become quite fond of them.  (I borrowed a small boa constrictor for a burlesque routine when I was in my 30's - remind me to tell you about that some time).  There were several snakes, lizards, a scorpion,  a Pixie Frog (which looked like a large wet green pancake with eyes) , as well as chickens, goats, bunnies, llamas, etc. 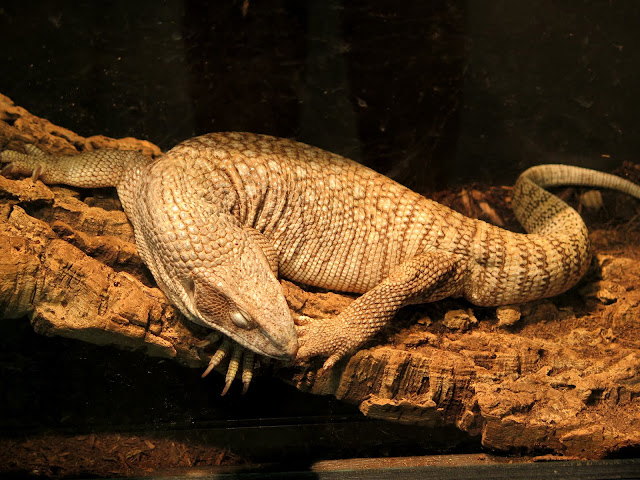 Just look at this sleeping beauty!  He (or she) is a Savannah Monitor lizard, native to Africa, and the smaller cousin of the Komodo Dragon.  They are around 40 - 50 inches in length. 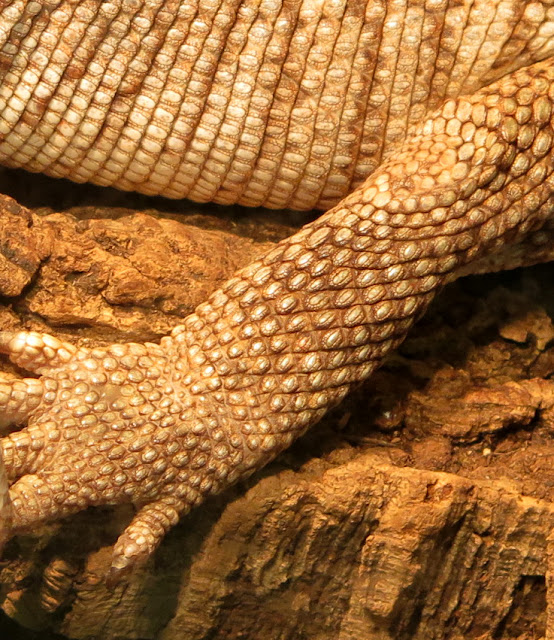 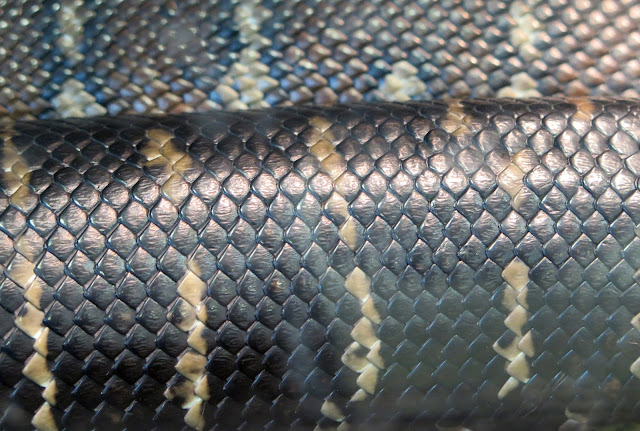 These are the scales of a Carpet Python, a native of Australia that can range in size from 5' - 16' 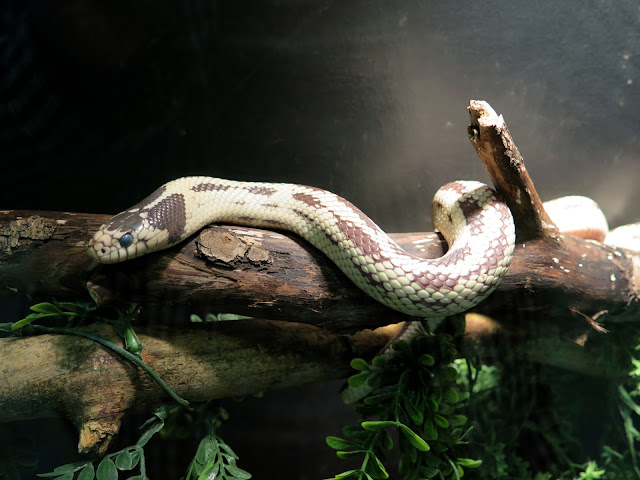 This handsome guy is a California Kingsnake, native the the West Coast of North America 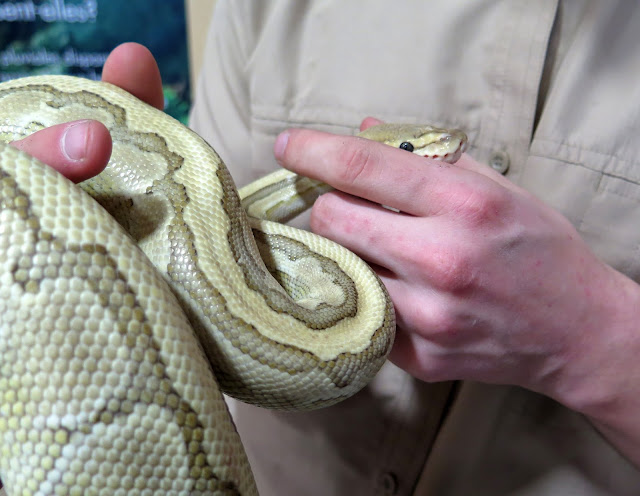 I asked one of the volunteers from Little Ray's Reptile Zoo if I could touch one of the pythons, so after a bit of a tussle (the snake was not keen on leaving his enclosure), they brought this one out for me.  For those of you who think snakes feel slimy, let me tell you they most certainly don't.  They are cool to the touch and their skins feels almost like plastic.  There's no doubt that they are very much alive, as you can feel the powerful muscle that is their body underneath their skin. 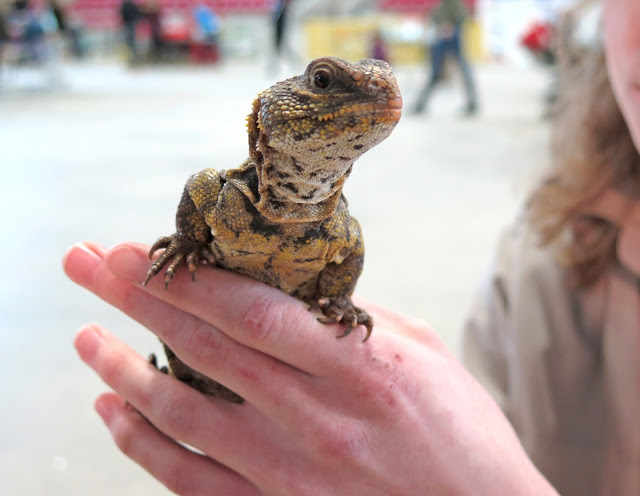 A volunteer was carrying this Nigerian Uromastyx around and when I got out my camera to get a shot, he was ready to show off his posing skills. 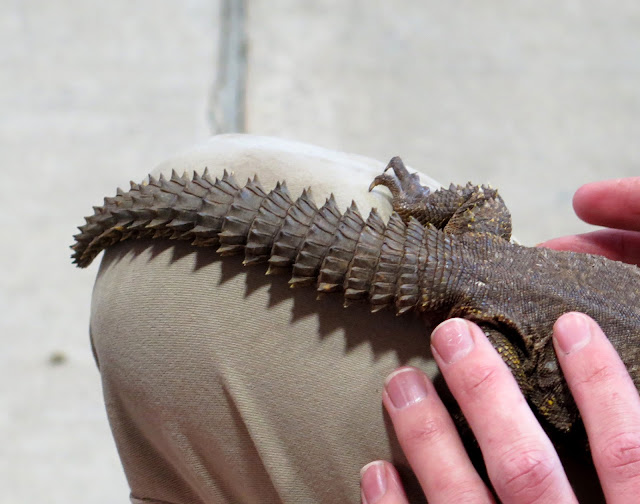 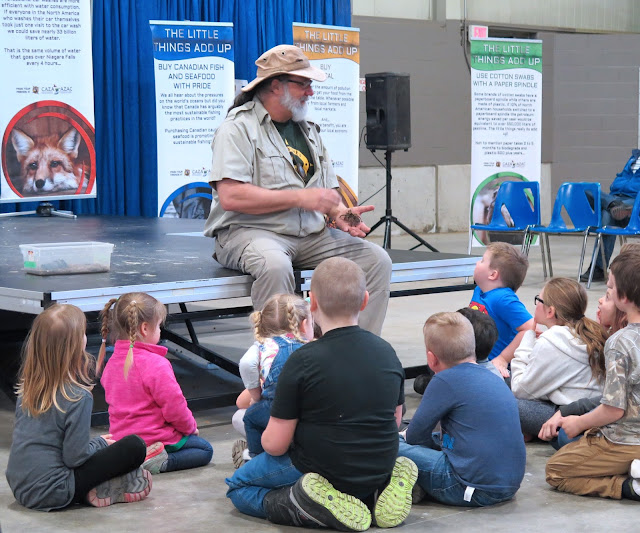 Every 15 minutes there was a live show for the kids that featured some of Little Ray's reptiles, or some impressive birds of prey.  I missed the Birds of Prey presentation, but watched one of Little Ray's staff talk about tarantulas (he is holding one in his left hand).

Having had my reptile fix, I headed for the cuddlier critters... 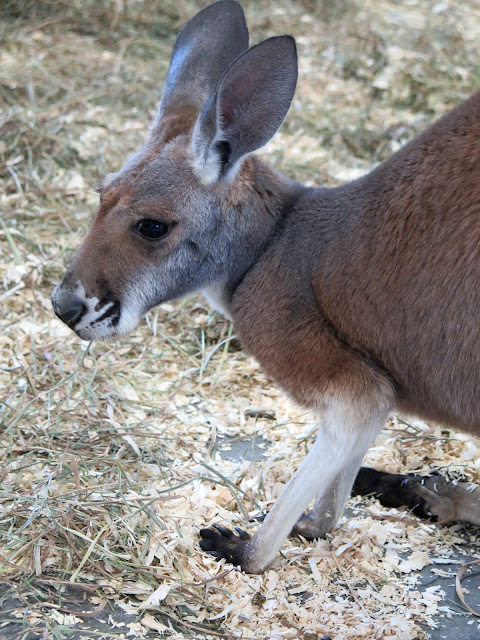 Like this guy, a four year old Red Kangaroo.  He was in a large, fenced area in the middle of the floor with a few tortoises (to keep him company, I guess...).  I was disappointed that the volunteer who was in his enclosure didn't provide us with any information about him, and looked bored as she tried to interest the kangaroo in what I assumed was a bit of food, which he politely ignored.  I imagine it had been a long day and being surrounded by kids for hours can be draining for anyone, but it would have been nice to see some engagement and learn something about this little guy.  I wanted to yell out, "for heaven's sake, you are hanging out with a kangaroo - show a little enthusiasm!" 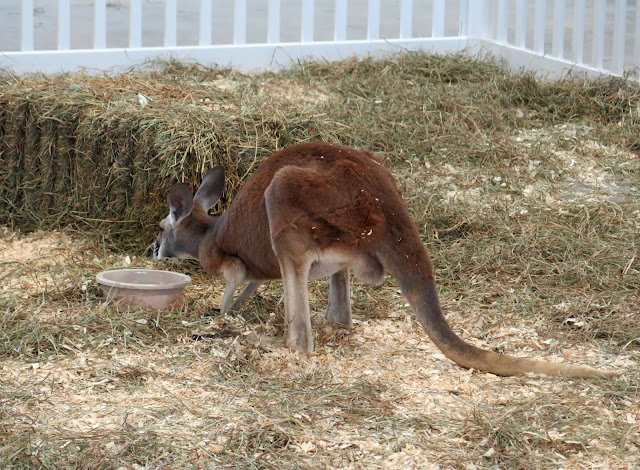 The kangaroo didn't seem to be stressed or nervous, and came close to the wooden fence so we could get a closer look at him.  As part of a touring animal exhibit, I'm sure he's become used to this sort of thing, and while I have mixed feelings about petting zoos, and zoos in general, this is quite likely the only chance that most of us who were there are going to get to see a live kangaroo. 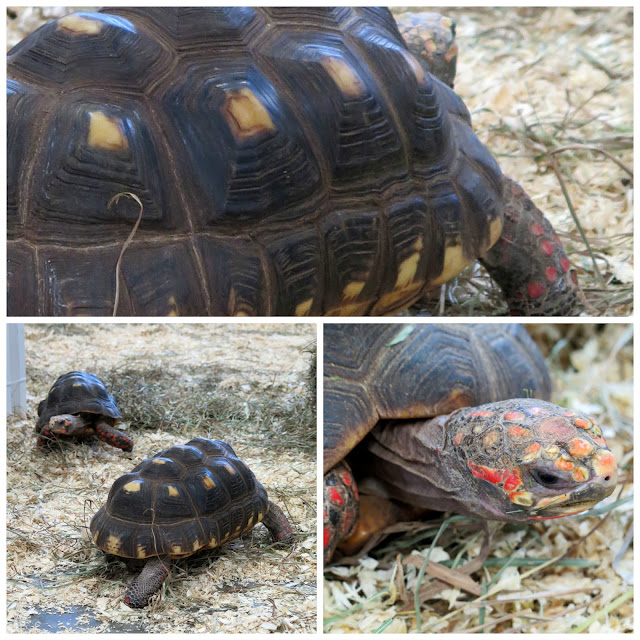 The tortoises that were in with the kangaroo 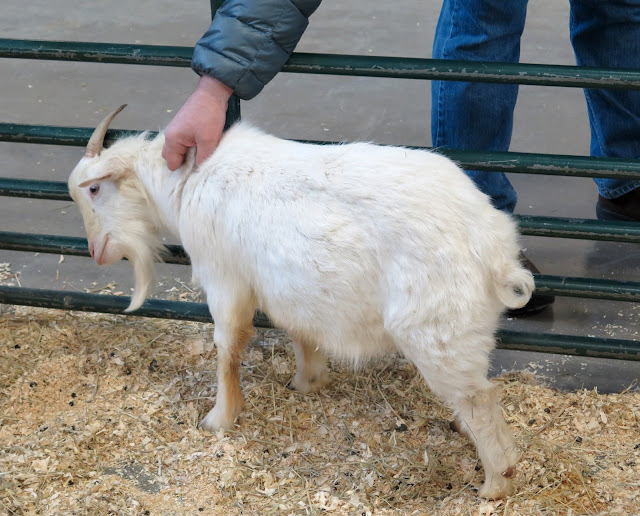 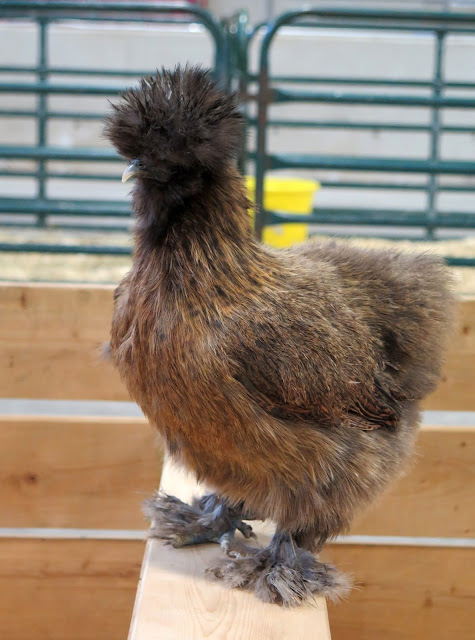 I was fascinated by this bad-ass chicken with the toe floofs.  It's a Silkie, a breed known for its unusual fluffy plumage and their gentle, friendly personality.  I was making soft "buck buck" sounds (I am the kind of person who talks to chickens) which captured its attention. 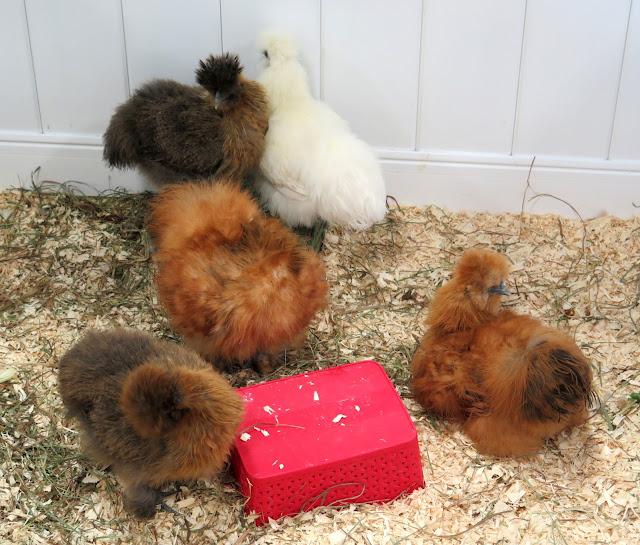 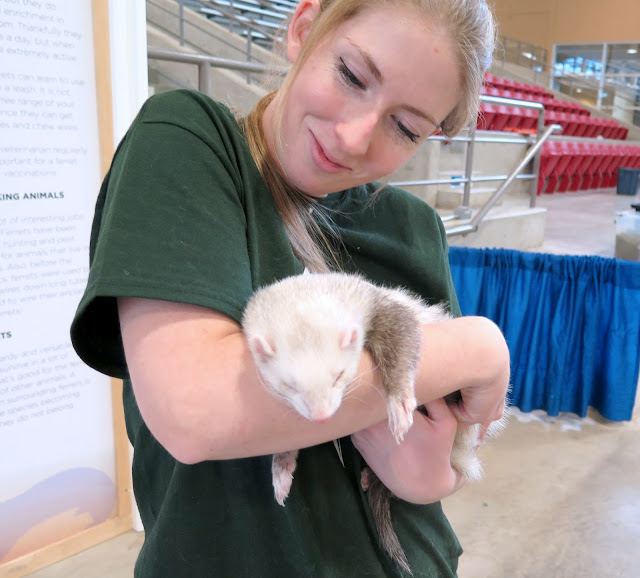 A shout-out to this lovely volunteer who was friendly and informative, and endlessly patient with the adults and children who crowded around her while she held a sleeping ferret. 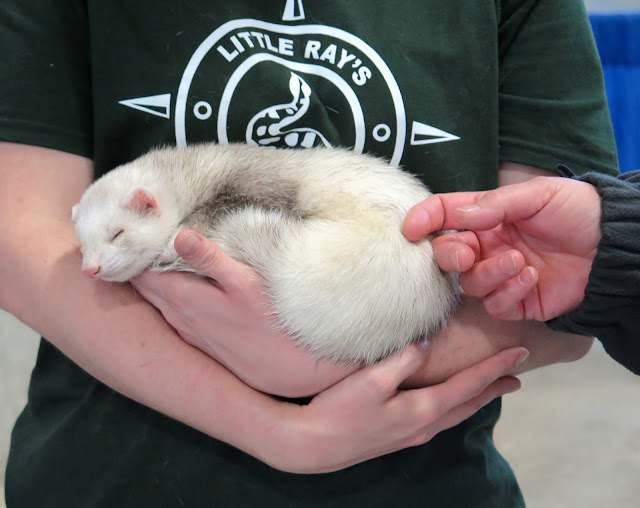 The little guy had been petted into a stupor, and stayed sound asleep while multiple strangers stroked his soft fur. 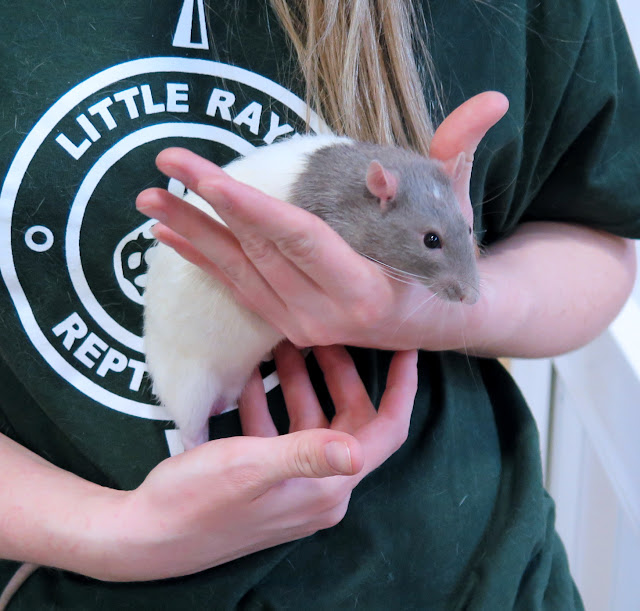 There was a pen containing about a dozen adult rats, and as it was pretty quiet I asked the volunteer who had been holding the ferret if I could pet some of the rats.  I told her I previously had some as pets, and missed them very much.  She brought out the girl in the photo above, who was pregnant, and you could feel the little baby bumps in her belly. 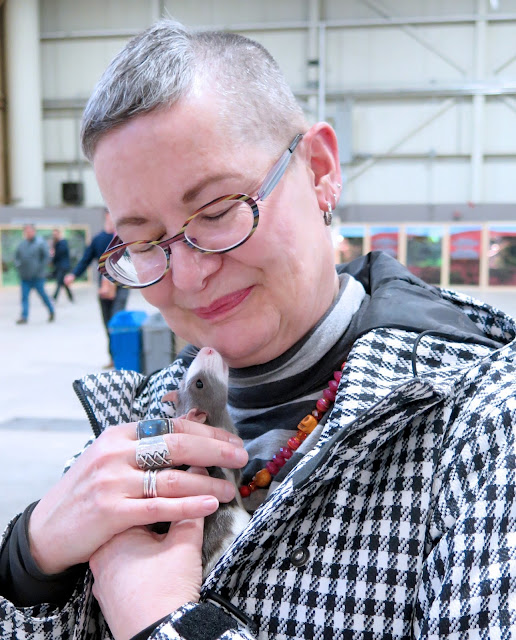 I spent a lot of time at the rat display, talking to the volunteer and sharing stories about Ginger and Ruby. and she graciously allowed me to hold one of them (touching and petting was fine, holding was not permitted).  As you might be able to tell from my blissful expression, this was my favourite moment of the night. As much as I love my cat, there is nothing like whisker tickles and ratty kisses.  I wish I would have got the name of the volunteer who made this happen, and was kind enough to take a photo for me.  It was a good thing I saved the rat display for last, as I was pretty teary afterwards.  If you happen to see this, thank you so much. 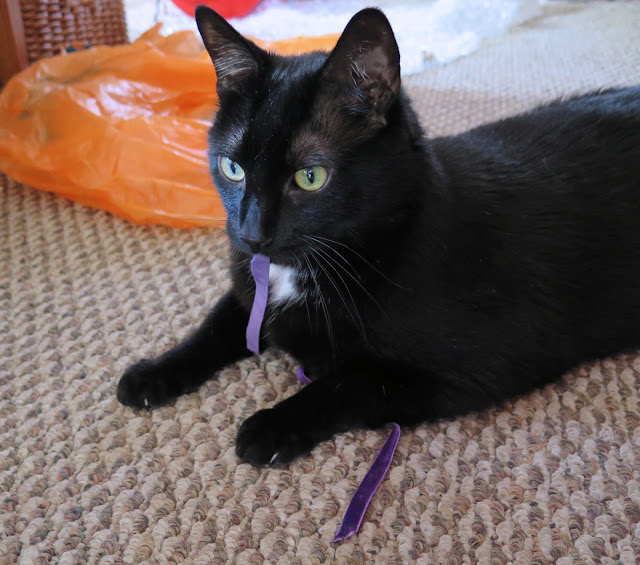 I felt a bit guilty after showing sharing my affections with unfamiliar critters so I made sure to give extra attention to this guy when I got home, shown here with his current favourite toy, a piece of velvet ribbon.
Posted by Forest City Fashionista at 4:26 PM