The title of this post will require a bit of context for my non-Canadian readers.  Freedom 55 was an ad campaign developed in 1989 by London Life Insurance Company that promoted the idea of early retirements (at 55, hence, Freedom 55).  The ad featured a man in a suit running for a bus, suddenly transported to a gorgeous beach, running next to an older version of himself (we are supposed to assume his 55 year old self).  He comments on the fact that his older self looks good, and wonders how he was able to afford such a great lifestyle - the answer, of course was Freedom 55.

Of course, the economy has changed since the ad was created, and very few people are able to retire at 55, but the phrase still remains a part of our culture, and has become more of a joke ("Freedom 85!")  than an achievable aspiration.   I knew that as my 55th Birthday was approaching there would certainly be no early retirement for me, but I did like the phrase "Freedom 55", and wondered what else it could mean. 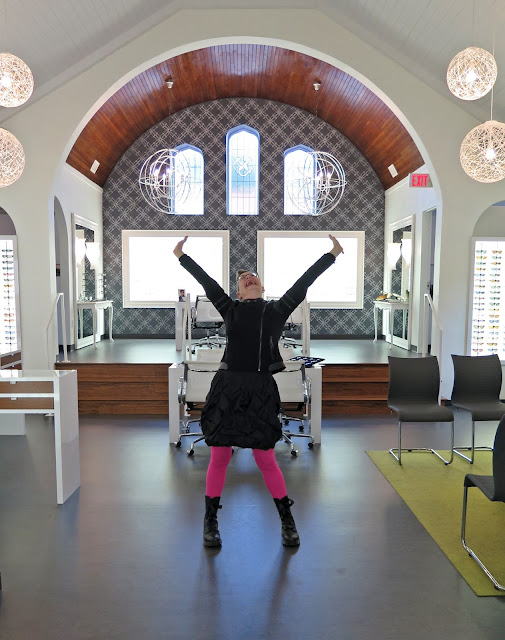 So here is my version of Freedom 55 - the freedom to dress however I want, to proclaim my age without embarrassment or apology, to speak my mind in a respectful, civilized manner and not apologize for marching to the tune of my own orchestra (to hell with a drummer, I want a whole band).  Thanks to the wonderful staff at Old North Optometry (where I was shopping for new eyeglass frames) for letting me briefly take over their beautiful space for this photo.

Labels: 55 and fabulous, doc martens, I will wear what I like, no early retirement for me, Old North Optometry, The real Freedom 55, wearing short skirts after 50