On Friday, October 28th I met up with my friends The Idiosyncratic Fashionistas, and several other hat aficionados at East Village Hats in New York.  The occasion was the launch party of Toronto milliner Tierre Taylor's "Iconic Hats of the 20th Century".  As a fellow Canadian, I was looking forward to meeting Taylor, but unfortunately, the milliner herself missed most of her own party as her flight from Toronto was delayed.  In her absence, the rest of us had great fun trying on her marvelous hats which were recreations of hats made by 5 influential milliners of the last century. 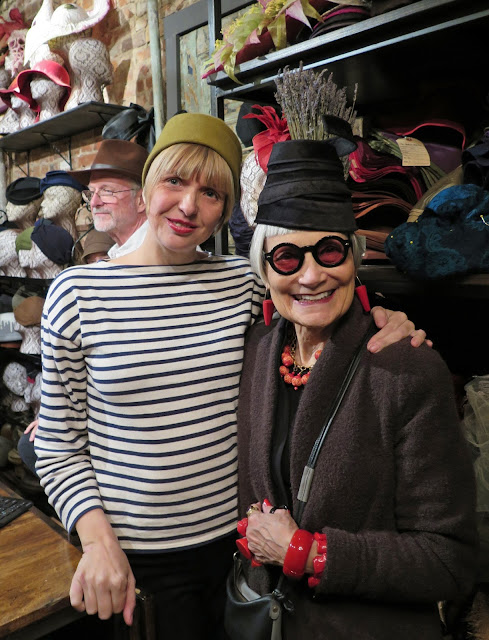 On the left is Julia Emily Knox, proprietor of East Village Hats (formerly Barbara Feinman Millinery) chatting with Jean, one half of The Idiosyncratic Fashionistas.  Knox, originally from England, trained as a milliner at the Fashion Institute of Technology in New York, and took over the business this year.  She heads up a small team of milliners who make the hats at the shop. 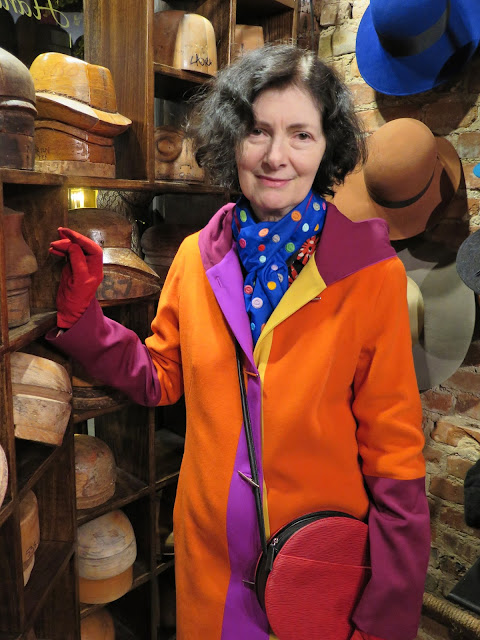 I arrived at the party to find artist and milliner Carol Markel (above) and her husband Richard Cramer checking out the shop.  Carol loves wearing bold colours, and her marvelous colour-blocked coat was a welcome respite from all the New York black. 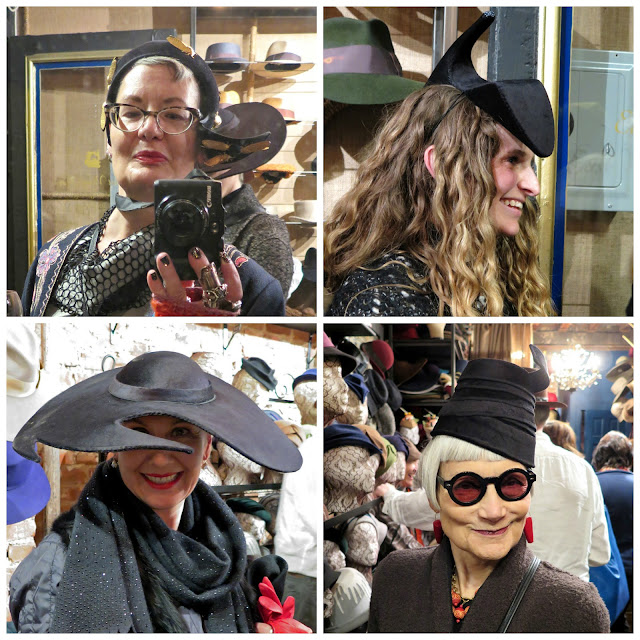 Four of the Tierre Taylor hats on display - clockwise from top left: Yours truly wearing a 20's inspired black wool felt cloche with a delightful "wing" on one side (hard to see in this photo).  The hat was covered in gold metal bugs that looked like cicadas; The Elsa Schiaparelli/Salvador Dali Shoe Hat as interpreted by Taylor; Jean wearing another one of Taylor's hats that looks like it would unravel if you pulled on the top strip of fabric; Taylor's recreation of Lilly Dache's "Peekaboo Hat. 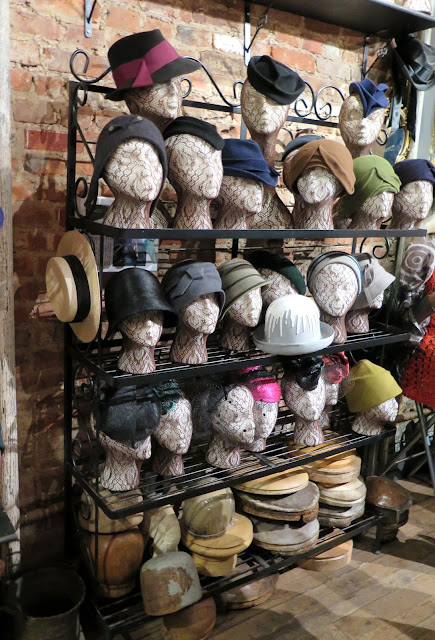 East Village Hats has a unique hat for every taste, and if they don't have one you like, they can custom make one for you. 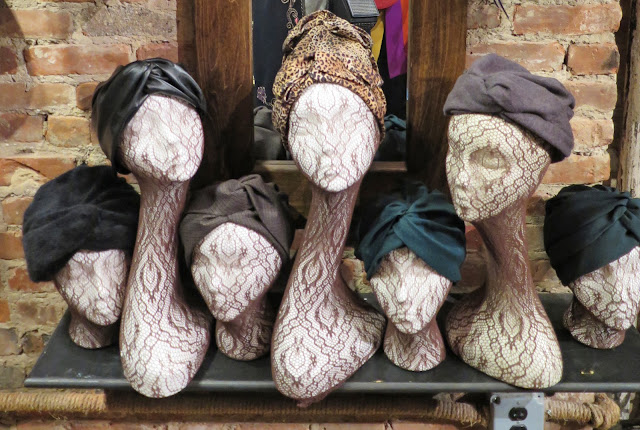 I had never considered myself a "turban person", but I tried the leopard print one in the center, and I rather liked it, in spite of, or perhaps because of, the Norma Desmond vibe. 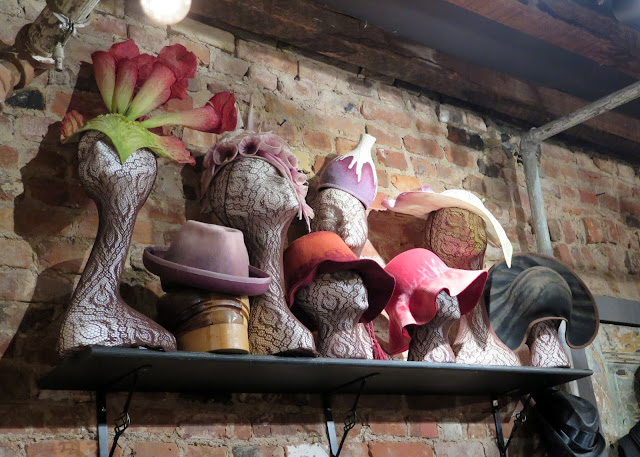 The exotic headwear on the shelf in the photo above was made by Maor Zabar.   The hats on the bottom row, and the purple and white "dripping vase" hat in the top row are from the "Stains" collection.  There are also two hats from the "Carnivorous Plants" collection in the top row. 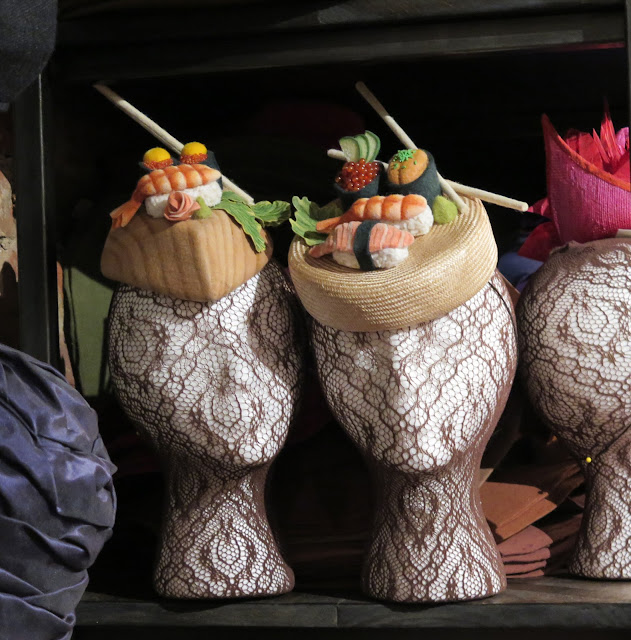 The head-turning Sushi hats above are also by Maor Zabar 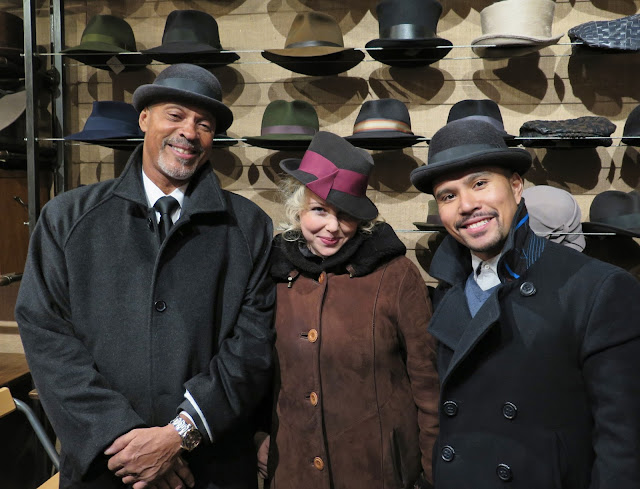 Most of the guests came wearing one of their own hats, and also took advantage of the opportunity to try some of the hats on display.  I believe the gentlemen above are wearing their own hats, while Bettina, a German actress, in the middle, is wearing a hat from the shop (I hope she ended up taking it home, as it looked so good on on her). 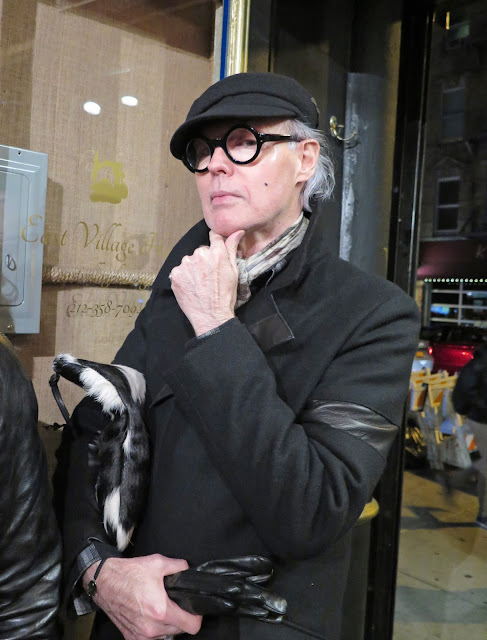 Patrick McDonald, also known as The Dandy of New York, made an appearance.  His impeccable, extravagant style was featured in the Bill Cunningham documentary, as he was a favourite subject of the street photographer.   I admire Patrick's style and follow his instagram feed, so it was delightful to meet him in person, and he was just as charming as I expected he would be. 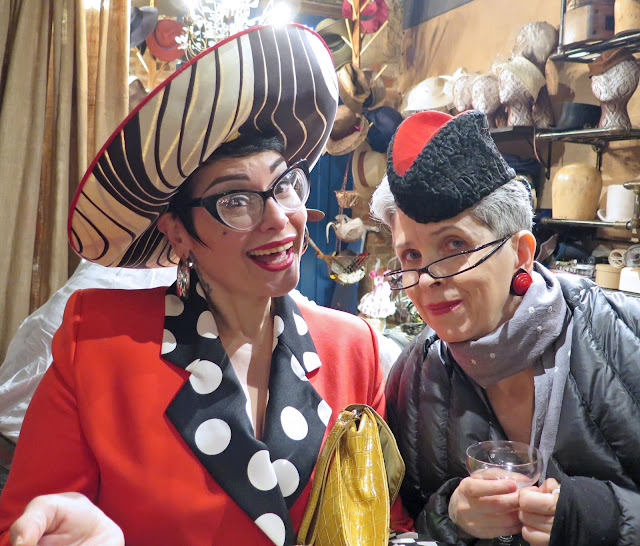 Diana, left, was wearing a fabulous black, white and red ensemble, topped with a spectacular vintage hat.  I caught her in conversation at "the bar" with Valerie, the other half of The Idiosyncratic Fashionistas. 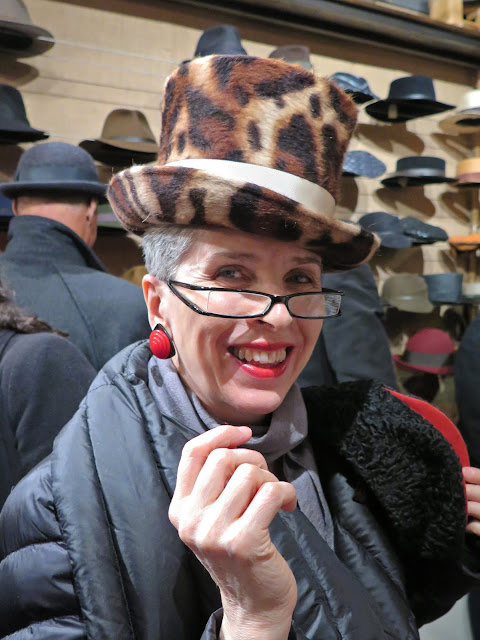 Valerie tried this animal-print top hat and she would definitely rock it with the right outfit. 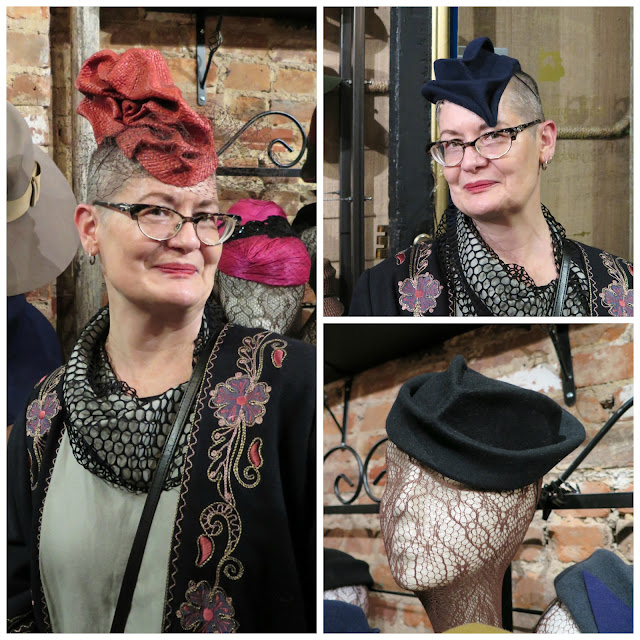 I prefer smaller hats on me, especially ones that are more fascinator than hat, and I particularly liked the pinched wool felt ones in the top and bottom right photos.  The red one on the left felt like it was molded out of leather and while it was a fabulous statement piece, I couldn't imagine wearing it as often as the other two.  The only problem with wearing hats that are held on your head with elastic when you have extremely short hair is that there is nothing to hide the elastic, as you can see in the top right photo. 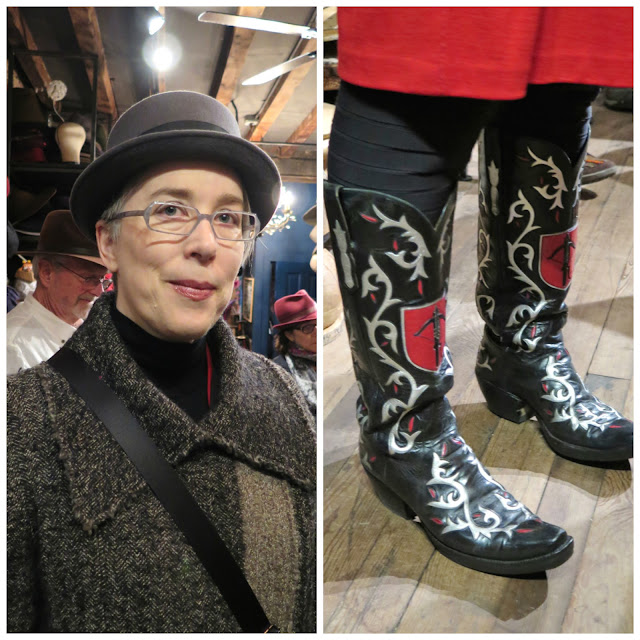 I asked this woman her name, but I was being a lazy blogger that night and didn't take any notes, so of course, by the time I got home I complete forgot what it was.  I really liked her chic, androgynous style, and her custom-made boots (above right) were spectacular. 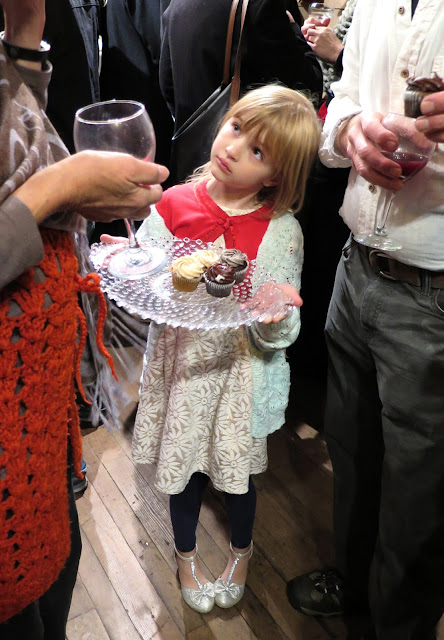 Julia's daughter was the most adorable server ever.  She looked so angelic, but if a guest didn't see her when she offered them a mini cupcake, she poked them with the platter to get their attention.
Posted by Forest City Fashionista at 7:53 PM