Swanning Around in Stratford

I mentioned in a post back in the fall that my mother had moved to a senior's apartment complex in Stratford, Ontario, which meant it was possible for me to visit her more often as there is a train that runs from London to Stratford .  It was her birthday this weekend so at the unreasonable hour of 7:30 am, I was on a train headed to the home of the Stratford Festival, and the annual Swan Parade. 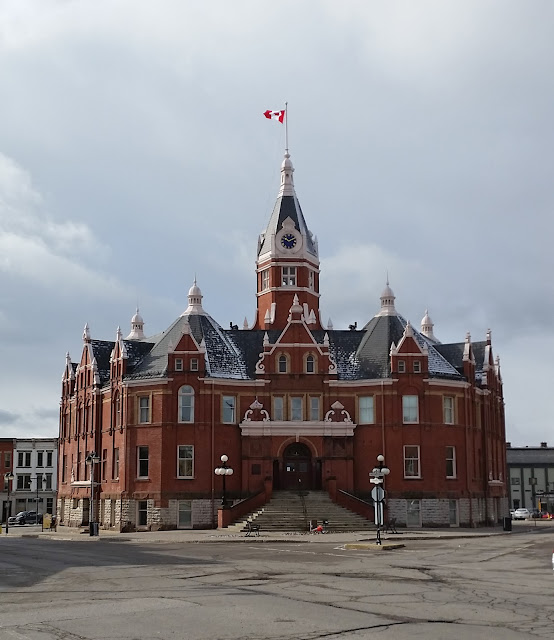 Stratford's City Hall, built in 1898, and designated a National Heritage Site in 1976.   It was threatened with demolition in the 60's and again in the 70's but was saved by a local citizen's group. 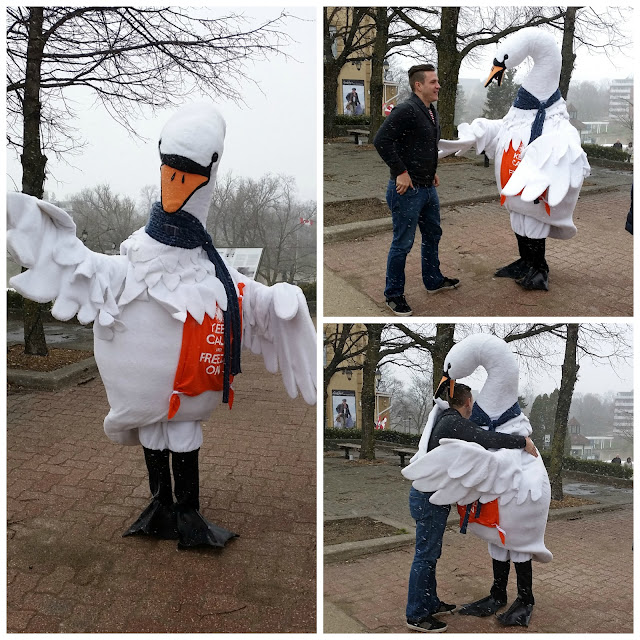 The swan has been the symbol of Stratford since 1918 when the city received a pair of them as a gift, (there is even a book called The Swans of Stratford, written by Robert Millar) and each year in the April, Stratford hosts a Swan Weekend, the highlight of which is the Swan Parade, where the city's swans make the journey from their winter headquarters down to the Avon River, accompanied by the Stratford Police Pipes and Drums Band.  Above is BJ the Swan, who was greeting people and giving out swan hugs (of course I got one, as the opportunity to hug a swan does not present itself often).  It was below 0 degrees and snowing, his "Keep Calm and Freeze On" sign was very appropriate.  The light snow fall turned into a blizzard about an hour after I took these photos. 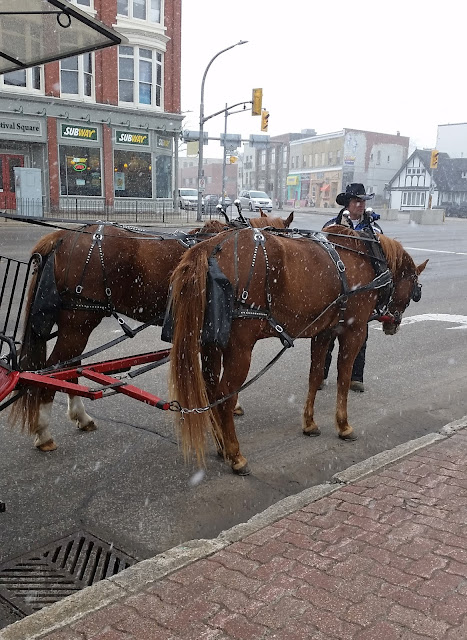 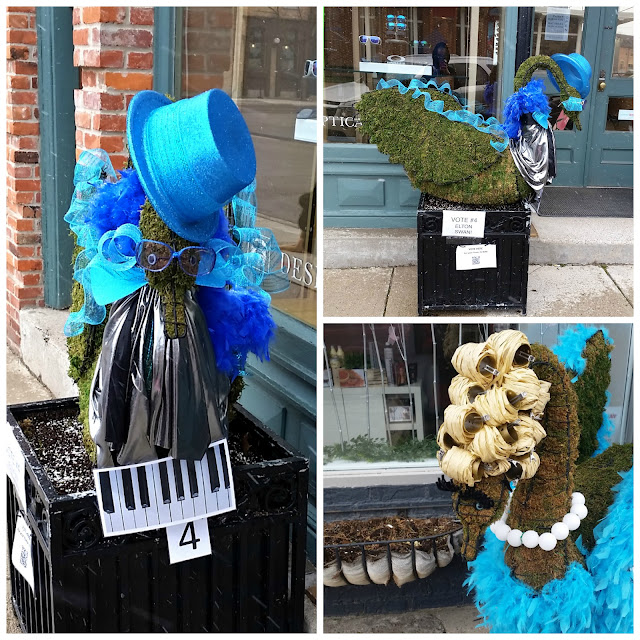 The downtown merchants hold a "Swan Quest" in which you could win a shopping spree by voting for your favourite decorated topiary swan.  Optical Design's creation, Elton Swan, complete with hat, cool specs and a keyboard, was my favourite.  The glamorous pearls and curls swan was also very well done.  Just look at those eyelashes!

The actual parade took place Sunday afternoon, and unfortunately, I wasn't able to see it, but here is a professionally shot video of the Swan Parade from last year, when it was obviously much warmer.  It's 6 minutes long, but if you have the time to watch, it shows off part of Stratford's charming downtown, and is a great capture of the parade. 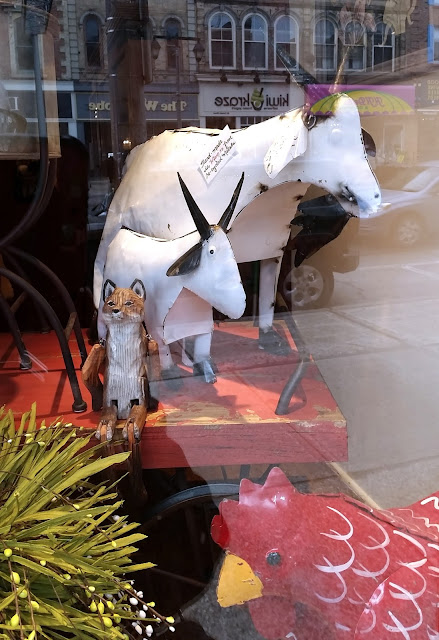 The swans weren't the only critters out on the weekend.  Watson's Chelsea Bazaar had some wonderful metal goats and chickens in their window.  I also liked the jointed wood fox seated by the smaller goat.  Watson's has beautiful housewares and gifts, and they also have two store cats, which makes it one of my favourite places to browse. 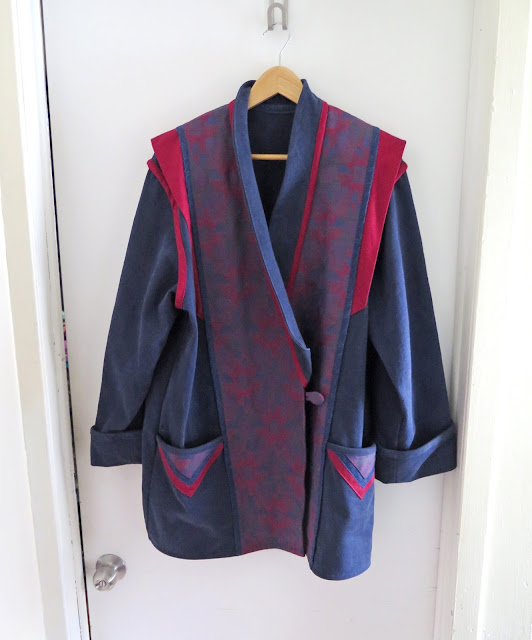 Another one of my favourite places to visit is Martingale Vintage, owned by the lovely Kelly, whom I enjoy catching up with when I'm in town.   I picked up this heavy cotton jacket from her sale rack for $15. 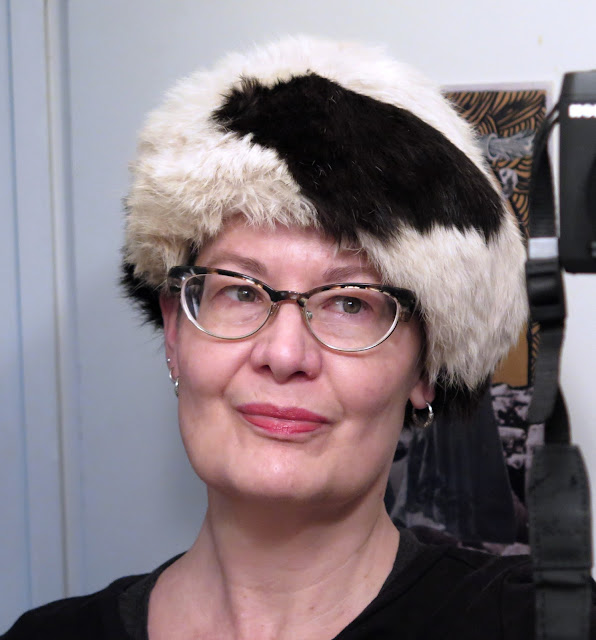 I also took home this made-in-Bucharest fur hat, and will readily admit that my decision to purchase this was heavily influenced by the fact that it was cold with blowing snow, and I had not dressed appropriately for the weather.  I wore the hat all day, and it kept my head cozy without being too warm.  Kelly and I debated about what kind of fur it was, and rabbit was suggested, and also, because of the colours, we thought it could even be skunk (no smell though). 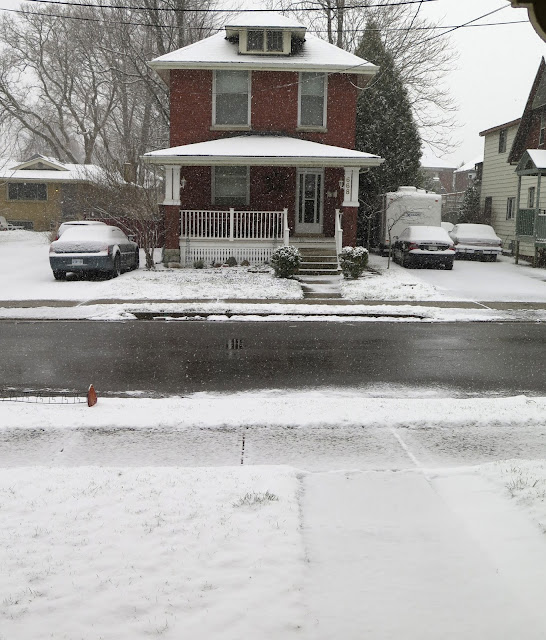 If those of you who live in other parts of Canada, or other countries are wondering if Spring has arrived in my neck of the woods yet, this photo of the view outside my front door, taken a few minutes ago, should answer your question.