There was some buzz that went around my blogging community recently about an online chat that took place between three 50+ women bloggers around the topic of how to go from "Frumpy to Fabulous".  At the end of the discussion, the topic of what messages do we send with our clothing. Specifically referencing women who appear on Advanced Style, the suggestion was made was that women who dressed "loudly" did so because they were "hurting inside" and that they were desperately trying to combat the "invisibility" that can come with ageing by being the "loudest presence in the room".

A couple of my friends, Suzanne and Melanie, addressed this in posts on their blogs, and while I didn't want to duplicate what had already been written, it did inspire me to take a look at some of my recent outfits and wonder, "does this woman look desperate/insecure/in emotional pain? 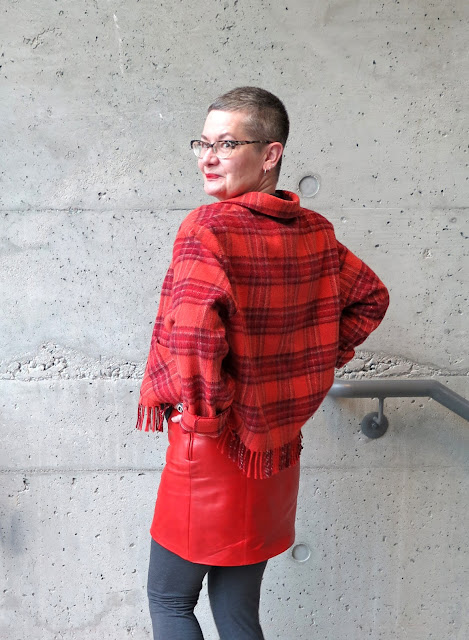 I felt very chipper in this outfit.  Orange and grey is one of my favourite colour combinations (it avoids the Halloween associations of black and orange).  I think that aside from the colour, this is a pretty tame outfit.  The Biba jacket and Danier skirt were both thrifted. 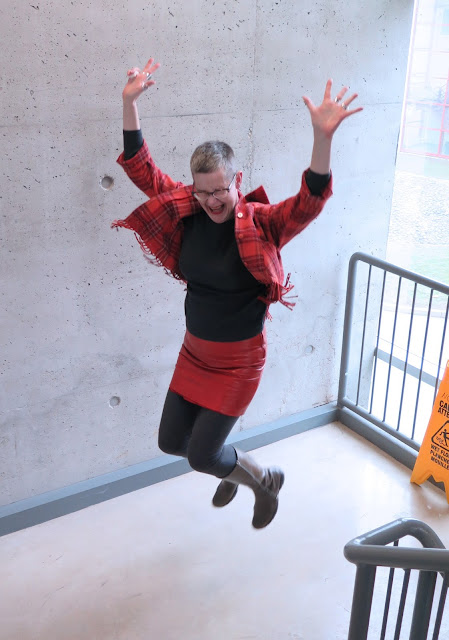 For the sake of making a less boring photo, I did this.  I would agree that in this photo, I do look like I could be having an emotional breakdown, but I also could have just found out that I won $60 million dollars, and I think this would have been the perfect response had that been the case. 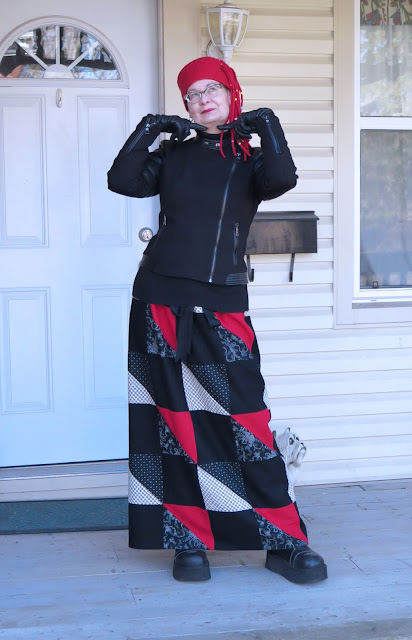 This was what I wore today.  It was cold, so I thought I'd get in one wearing of this wool patchwork skirt I purchased a couple of months ago at a neighbourhood vintage store.  Unfortunately, the owner of the store is not very careful about the quality of the stock she's selling, and most of the clothing, including this skirt, has multiple moth holes (I had it dry cleaned and it's kept in a plastic bag to prevent any infestations).   The hat was a gift from a friend of the Style Crone, the moto-style jacket from Le Chateau and my trusty 1990's raver Swear boots, which still make an appearance now and then.  I got a few side-eyes, but I also got a lot of smiles, which made an already bright day even brighter.  I don't know what the people who smiled thought of me, most likely they just appreciated the whimsy of my hat and its faux dreadlocks.  Or maybe they thought I was desperate for attention.  Who knows,  and more importantly, who cares? 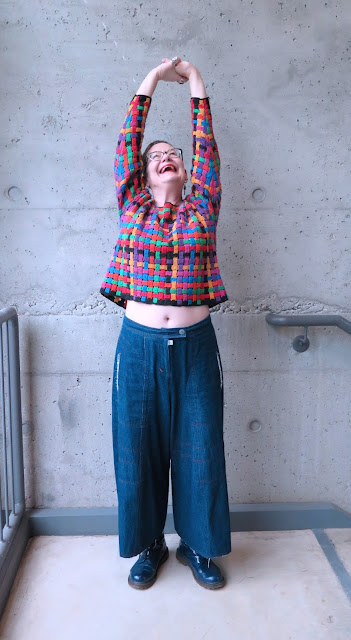 I will agree, I look silly here, but it was because my boxy, cotton 80's sweater and my giant jeans were making me feel that way, and even though it was not one of my most flattering outfits, I felt comfortably visible.   I am even flashing my 54 year old midriff (which was just for the photo -when my arms are lowered, the sweater covers my mid-section). OMG, a woman in her mid-50's is showing her bare stomach on the internet.  Cover your children's eyes, everyone! 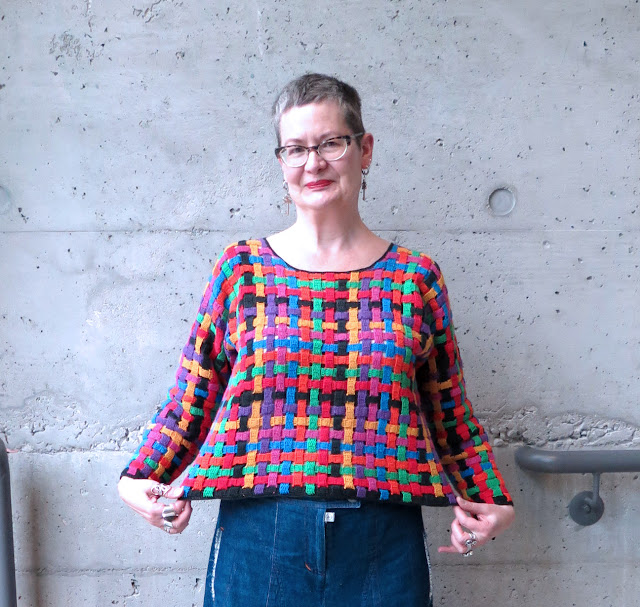 All decorum is restored, except for the fact that the sweater is made of knit strips of different colours, woven together which means there are little squares through which my actual skin can be seen, if you look hard enough.  Who knows what the people in my office thought about me the day I wore this.

My point is, does it really matter what others think your choice of clothing says about you?  In certain situations like a job interview, an audition, or a meeting with the Pope, the answer would be yes.  But on a regular day, most people are too wrapped up in their own life to give much thought to what some over-50 dame is wearing, and if they do, and the thought is along the line of "what crazy shit is that woman wearing?", is that going to make me question my style choices?  No.  I know I'm an intelligent, creative, and interesting person who encourages and supports creativity and self-expression in others.   What is crazy (and sad) is when women publicly question the mental stability emotional well-being of other women because of their non-conformist style choices.

Late addition - Kathryn, who is the line of communication to and from my lovely St. Louis fan club (whose members are dwindling as the ancients depart this world) sent me the Weird Mantra today:

Blessed are the WEIRD people.....
The poets and the misfits,
The artists, the writers, the musicmakers,
The dreamers and the outsiders.....
for they force us to see the world differently
and that is how we become real.

Labels: dressing creatively, over 50 blogger, stylish women over 50, wearing bright colours, What does your clothing say about you

I'll Get By With a Little Help From My Friends


I've spent the past two weeks knocked out by the flu (this would be the year I didn't get the flu shot) which at least gave me something else to think about besides the Bowie Dance Party -  when you're running a fever for 4 days straight, you stop caring about whether anyone came to your party or not.  Anyway, aside from the lingering cough, I seem to be getting better which meant it was time to write something.

When I first announced I was having a David Bowie Dance party, lots of people told me what a great idea it was, and how they were looking forward to being there.  After all, there are lots of David Bowie fans everywhere, even in conservative London, Ontario, right?  When you are offering treats, prizes, and a great music performance for the paltry sum of $5,  how could people not want to come?  It was promoted all over the media, including two local radio stations, in the Downtown London newsletter, the local paper, and shared all over Facebook.  I put up posters all over downtown and handed out cards advertising the event.

Even though everyone who hosts an event knows there's a risk that no one will show up, nothing prepared me for the moment when it was 15 minutes after the advertised start time of the party, and only three people had turned up.  My heart plummeted to the soles of my platform boots.    Heather kept patting my shoulder and saying "more people will come".   And she was right, but the event I envisioned as an occasion to bring together Bowie fans here in London to celebrate his creative genius turned into a small get-together for the wonderful group of friends who support all (or at least most) of my hair-brained schemes.   Of the 35 people that came, there were a few people I didn't know, including a lovely woman around my age, a fan of my blog, who came by herself and proceeded to dance to every song.  A work colleague brought her 5 year old daughter, who seemed to think it was a great party.  And in fact, that seemed to be the general opinion of the people who were there, so to all of you, who for one reason or another decided not to come, you missed a good party. 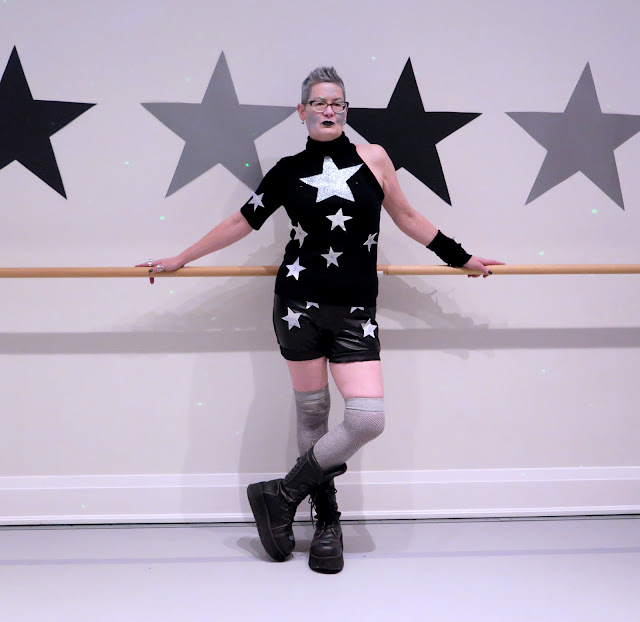 I asked Heather to take a photo of my costume while we were setting up, and it turned out to be the only photo I have of me from the evening.  I was The Star(Wo)Man, and although it's hard to tell from the photo, I had silver stars painted on my face. 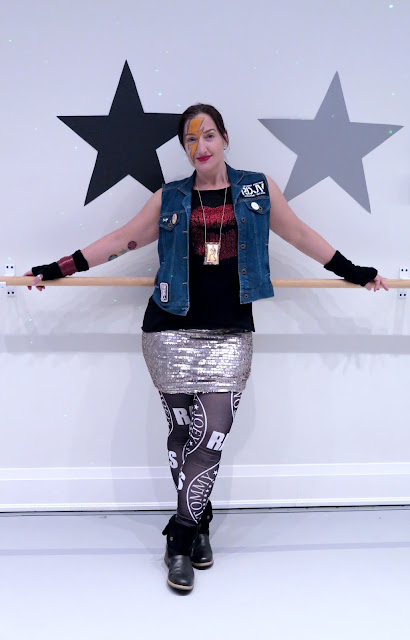 My best pal, who had spent weeks driving me all over to pick up supplies, was there that night to help with setup and moral support.  She even let me paint an Aladdin Sane lightning bolt on her face, a sign of a true friend who is not big Bowie fan. 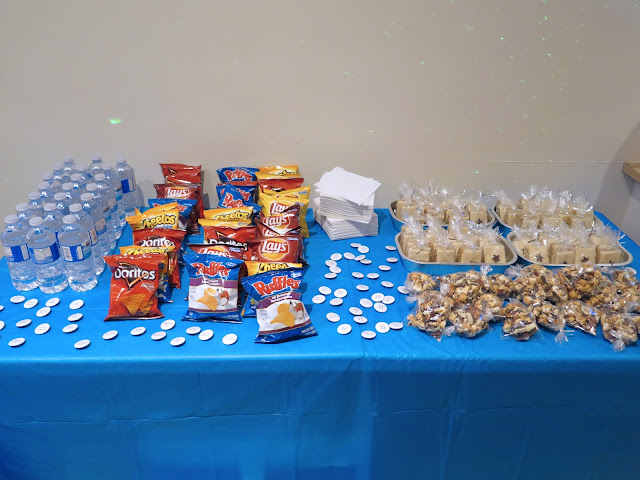 The snack table was loaded and ready to go.  I made buttons with Bowie song titles and lyrics for people to take home as souvenirs. 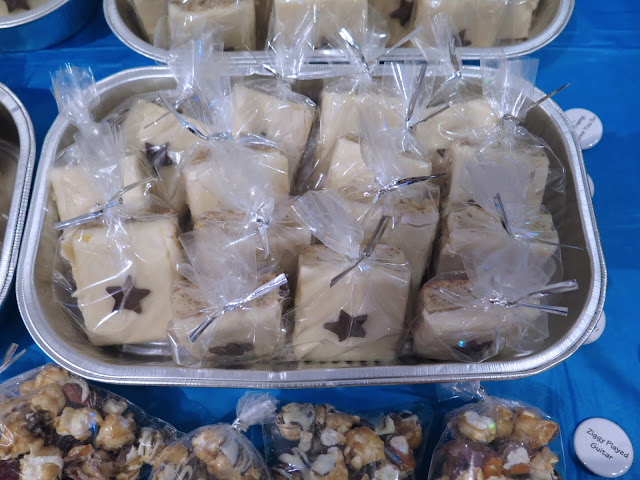 A work colleague made banana brownies for a bake sale we had last fall, and they were sooo delicious, I hired her to make them for the party, and figured if we added a chocolate star, we could call them Bowie Black Star Banana Brownies.   They went over very well, and I encouraged people to take some home for their friends. 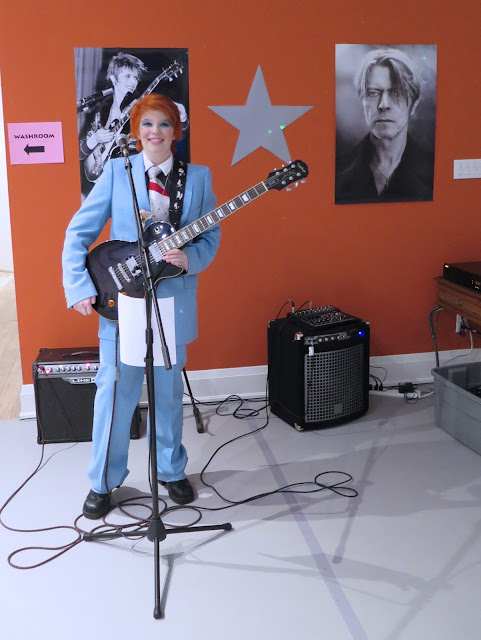 Grace Grant and her dad set up her equipment and did a sound check before we opened the doors.  I love that Grace  dyed her hair orange to go with her costume from the "Life On Mars" video. 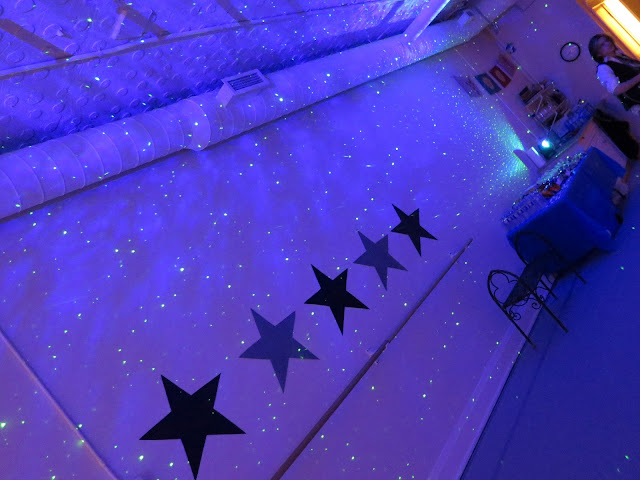 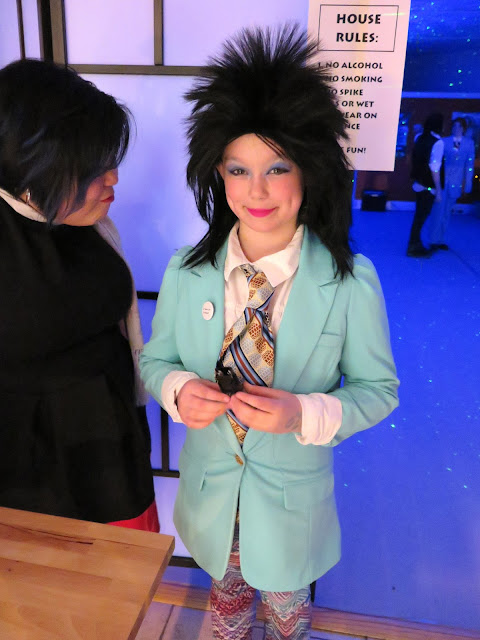 One of the local roller derby girls brought her daughter Keira, who when she found out there was a costume contest, put together the most adorable Bowie outfit.  She was the hit of the party, and aside from Grace and I, the only other person who came in costume. Becca did a brilliant job on her Aladdin Insane face makeup which won her a prize package donated by Jackpot Vintage and Shakin Katz Radio.   Prizes had also been donated by From Mars and Grooves Record Store. 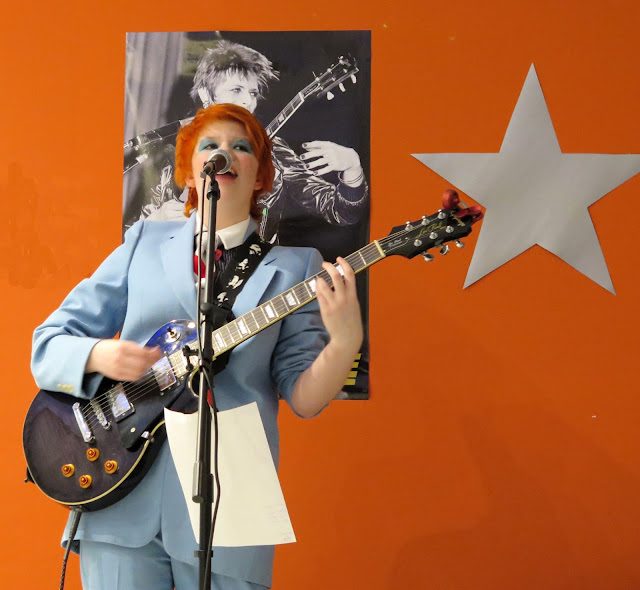 Grace Grant put on a spectacular performance, celebrating the music of David Bowie with a set list that included Space Oddity, Quicksand, Kooks, and Ziggy Stardust. 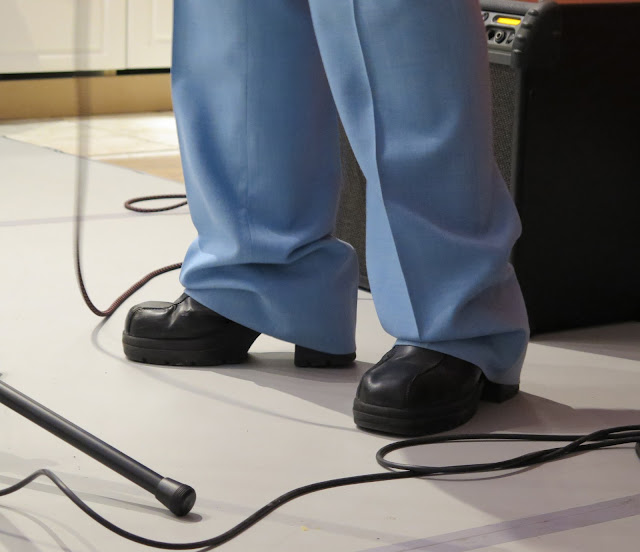 
Thank you so very much to Grace Grant, the people who donated prizes and otherwise helped out, and those of you who came to the party.   Think of the event as a thank you party for all the support you've shown me over the years.
Posted by Forest City Fashionista at 5:06 PM 16 comments: