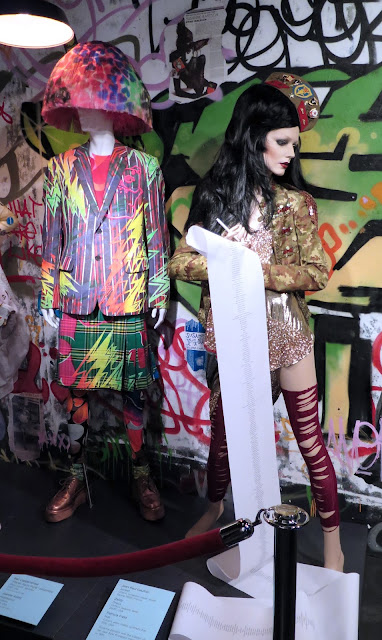 Upon entering the exhibit Fashion Underground: The World of Susanne Bartsch, in the Museum at the Fashion Institute of Technology, you are greeted by a Susanne Bartsch mannequin, who appears to be checking to see if your name is on the RSVP list.  Next to her is a lineup of other "party guests" including the one next to her wearing a colourful outfit designed by Ben Copperwheat, whom I met at the Symposium.  Bartsch and her friends were part of a creative "Fashion Underground" who raised the act of getting dressed to go out to a club to the level of performance art. 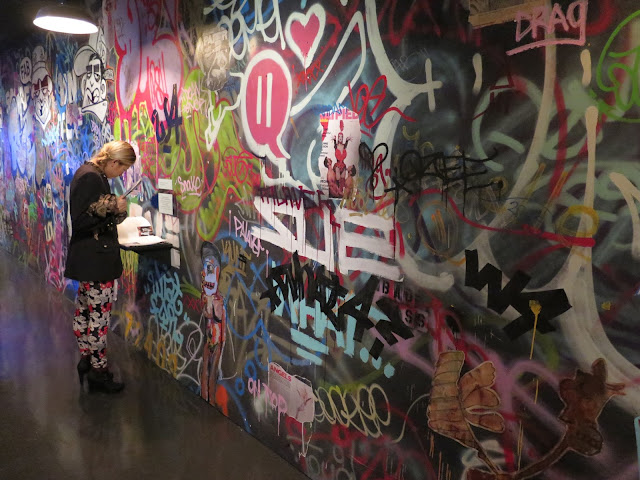 The graffiti covered walls in the entrance to the exhibit recalls the alleys surrounding the urban underground clubs where Bartsch's parties were held.  It was a lucky coincidence that the young woman in the Minnie Mouse print leggings happened to be standing in the just the right place.


In general, the exhibits at the Museum focus on a particular theme, or designer, so it is unusual for them to host an exhibit that focuses on the wardrobe of one woman (although they did feature clothing owned by Daphne Guinness in 2011).  However, Bartsch has served as a muse to many designers (established and upcoming) and makeup artists, and her flair for the theatrical frees them to be as creative as possible.  The exhibit, which Bartsch estimates features about half of her wardrobe, is divided into three sections, representing various aspects of her life. 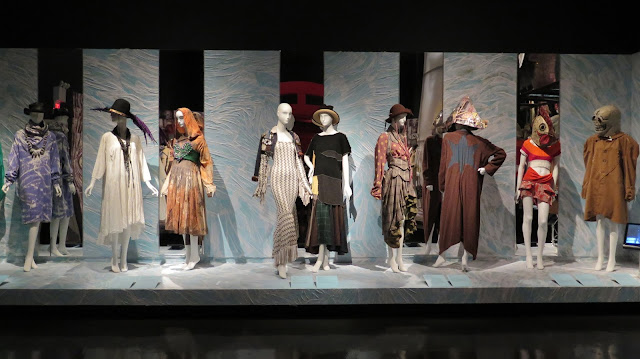 Susanne Bartsch moved from her native Switzerland to London, England in 1971 to escape a conservative, middle-class life, and became enamoured with the fashion there.  In 1981, Bartsch landed in New York, and opened her first boutique on Thompson Street in Soho.  She is credited for bringing the English fashion scene to New York and stocked her boutique with pieces by as then unfamiliar designers John Galliano, Vivienne Westwood, Rachel Auburn, Leigh Bowery, Stephen Jones and Body Map. 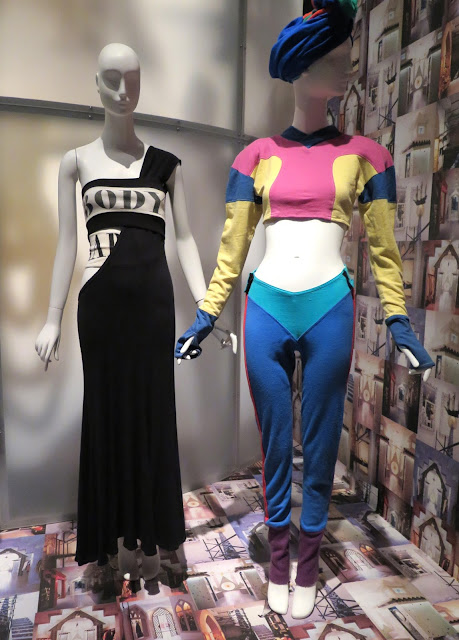 One of the most successful labels to emerge from the London club scene was Body Map, represented by the black and white cotton lycra and terrycloth dress on the left.  The ensemble on the right, from 1983, was designed by Annie La Paz.  In an interview, Body Map's designers, Stevie Stewart and David Holah, have credited Bartsch for their early success.  The publicity they received when their designs were featured in her "New London in New York" Fashion show, held to introduce British designers to American audiences, made them famous in both countries. 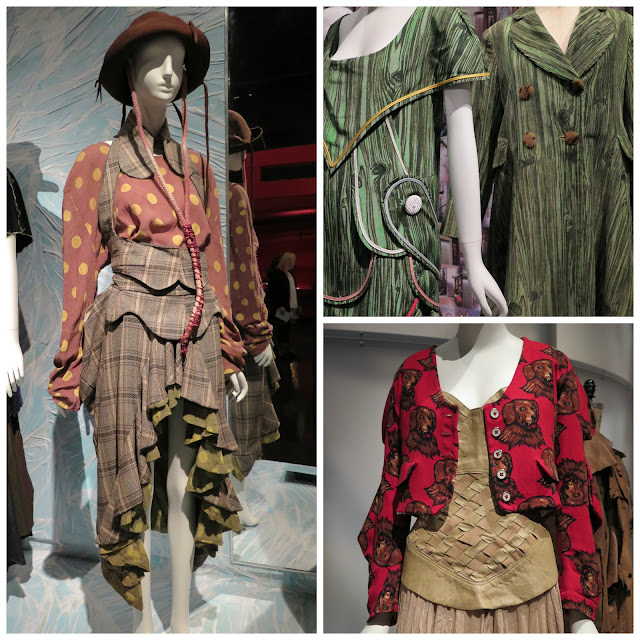 I loved the outfit on the left, designed by Rachel Auburn, who later went on to be the resident DJ at Leigh Bowery's club, Taboo.  The red dog-print jacket is also one of her designs, paired with a leather corset by Fiona Dealey.  The wood-patterned dress and coat in the upper right photo are by Vivienne Westwood. The "Boudoir" section of the exhibit with its red walls, (echoing the walls in her Chelsea Hotel apartment), features some of Bartsch's more recent outfits.  From left to right:  "Victorian Punk" dress by Zaldy, one of Bartsch's favourite designers; an outfit made up of pieces by Reem Alasadi, Jean Paul Gaultier and Zaldy; corset dress designed by The Blonds.  Bartsch had elaborate wigs or headpieces for every outfit. 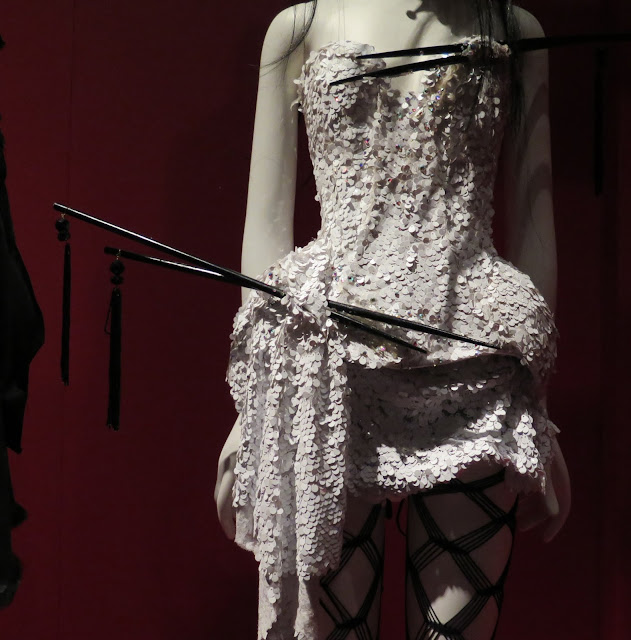 A detail of the striking outfit designed by The Blonds, who are known for their sparkly, jewel-embellished corsets, body suits and dresses,  is made of plastic palettes, wood, glass beads, net, canvas and buckram. 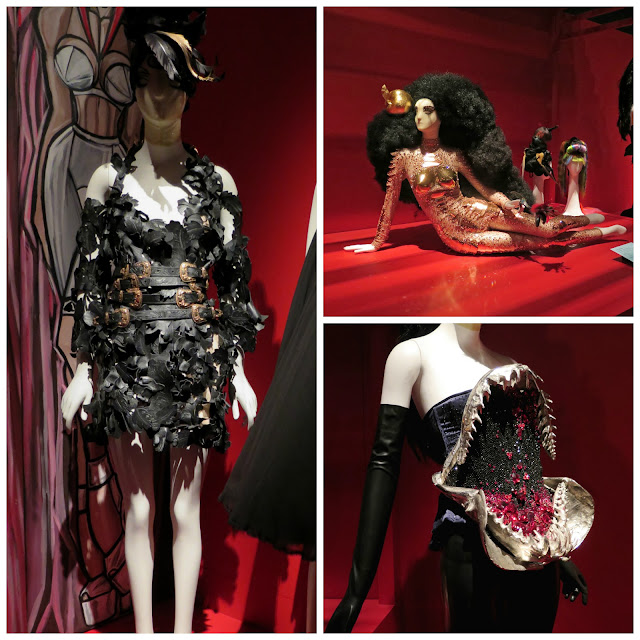 Clockwise from left:  the intricately cut leather dress by Alexander McQueen (the leather is cut into the shapes of leaves and foliage) was one of my favourite pieces in this section;  the "Golden Asp catsuit, and the Jaws corset, both designed by The Blonds, who are quoted as saying "only Susanne Bartsch could pull off a jaws corset".  I think they are probably right. 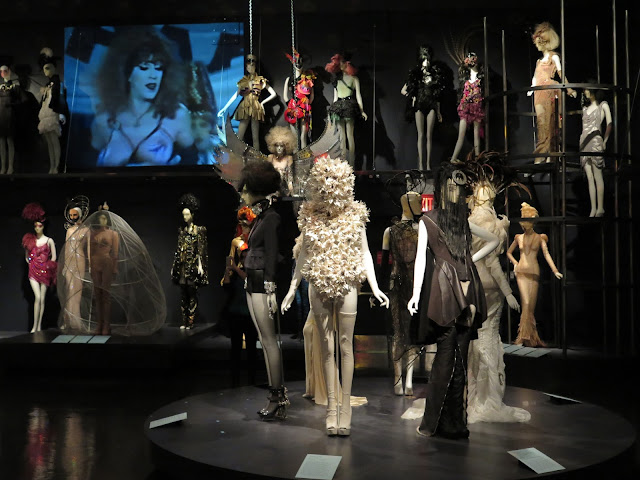 Stepping into the main room of the museum, I was overwhelmed by the spectacle of clothing crafted from leather, paper, feathers, plastic, fabric, etc. displayed on various levels intended to evoke a darkened nightclub. 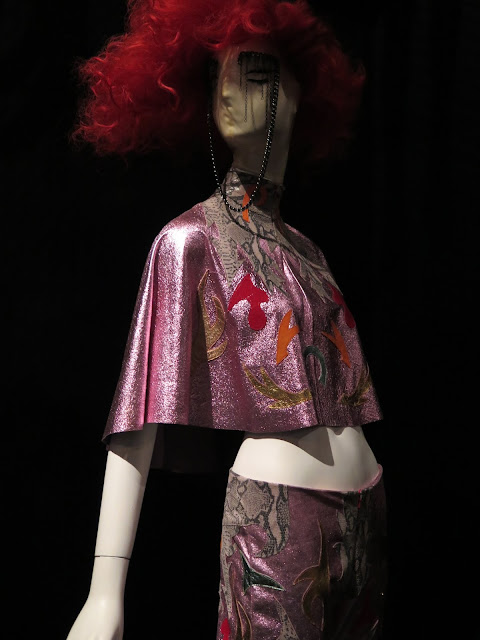 A crow would have been exhausted in this exhibit trying to grab all the shiny things.  This metallic leather ensemble by Pam Hogg was only one of the many outfits that incorporated reflective surfaces. 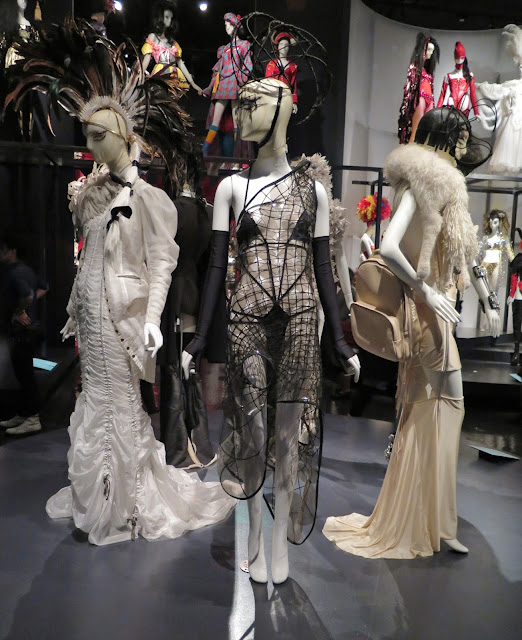 On the left is a dress by Norma Kamali, made of parachute nylon, worn underneath an organza jacket by Jean Paul Gaultier.  The center outfit, resembling a spider web, consists of a Gaultier bodysuit with an overdress by ThreeASFOUR. 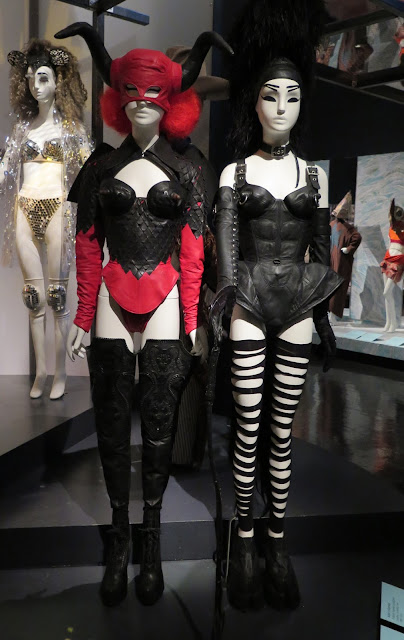 Two leather outfits created by Abel Villareal, a self-taught leather artist who may many outfits for Bartsch.  Bartsch wore the Fetish Horse Costume on the right (which features a synthetic hair horse tail and mane) to an AIDS Benefit in Los Angeles. 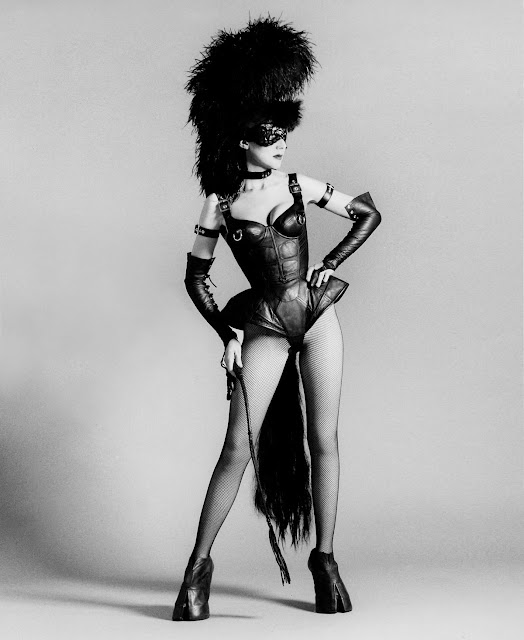 This photo by Albert Sanchez from 1992 of Bartsch wearing the Fetish Horse Costume shows off the detail much better, including the "Hoof shoes". 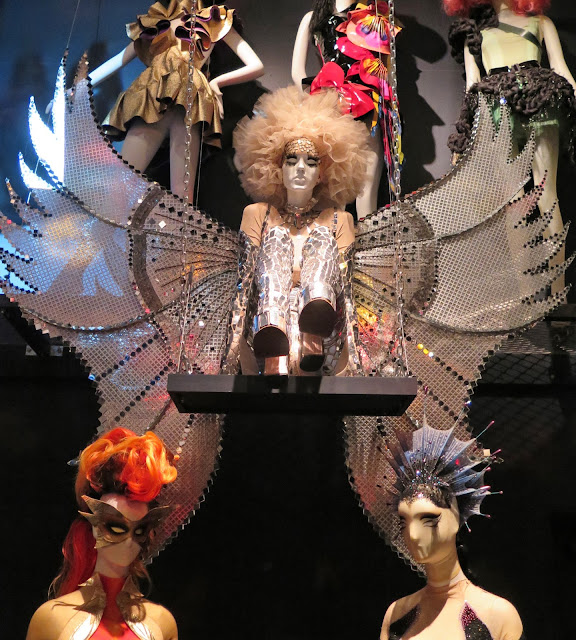 I failed to note who designed this mirror-embellished, winged costume, but it was so fantastic I had to include it here anyway.

Wearing metal buttons featuring the names of bands, or witty sayings, was very popular in the 80's and this outfit from 1987 features them on suspenders and covering a piece of vintage lingerie. 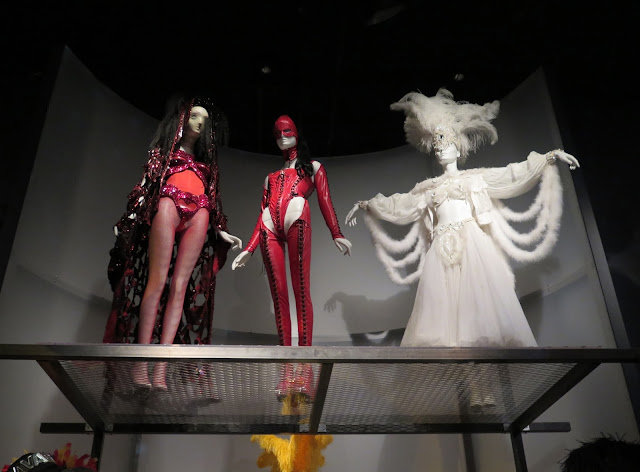 Three of the outfits on the second tier "Catwalk" 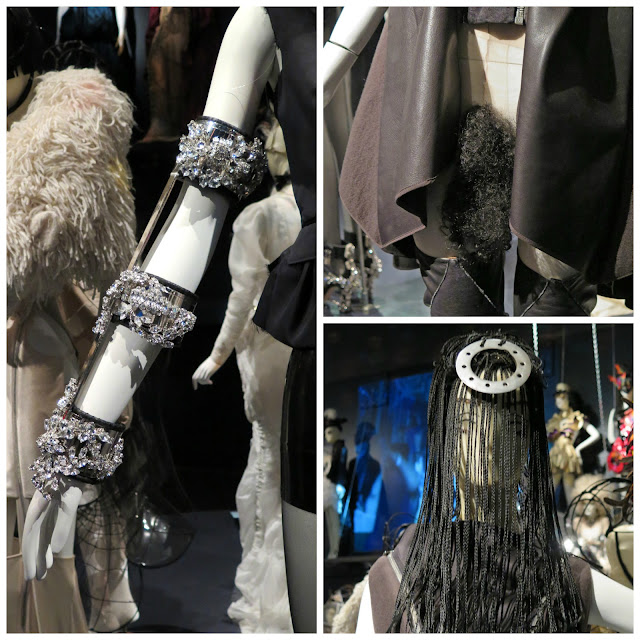 Each outfit had marvelous accessories including wigs, headpieces and in one case, even a merkin (see top right photo). 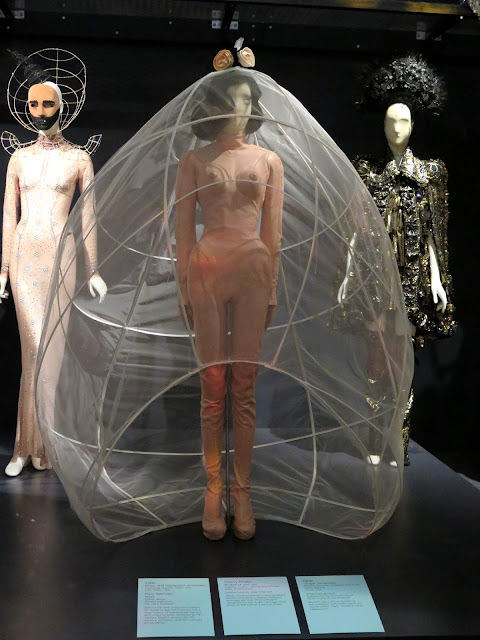 For her runway wedding to David Barton, founder of David Barton Gym, in 1995, Bartsch wore a Thierry Mugler-designed leather bodysuit and giant egg-shaped veil which was large enough to shelter Bartsch, Barton, and their two year old son Bailey. 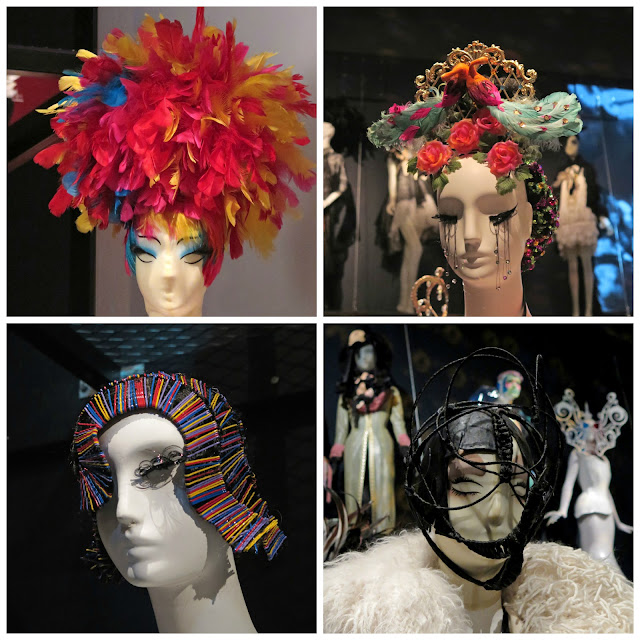 The headpieces created for the outfits are works of art in themselves and were made from every possible material including feathers, leather and even what looked like coloured bobby pins. 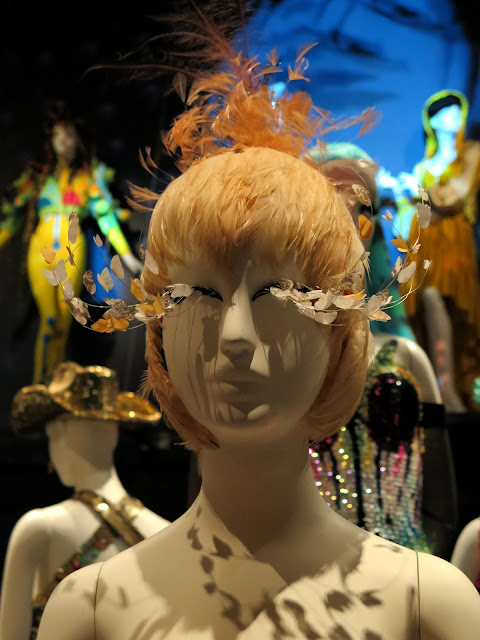 Bartsch is known for her love of extravagantly long false eyelashes, and some outfits had custom-made coordinating lashes.  Bartsch is currently working with MAC Cosmetics on a line of over-the-top eyelashes to be released later this year. 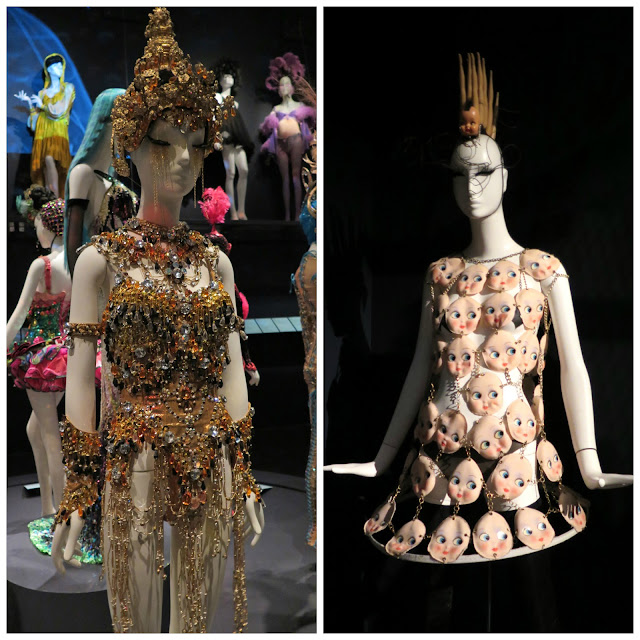 On the left is a crystal studded corset by Mr. Pearl paired with a refurbished Thai Headpiece.  On the right is what has come to be referred to as the "creepy doll head dress", complete with a mohawk-style headpiece made from barbie doll legs.


Bartsch is also credited for helping launch the career of corset maker Mr. Pearl, whom she referred to as the "Stitch Bitch", as he would spend his days sewing in his small East village apartment.  Bartsch was a brilliant people connector, and introduced Pearl to French fashion designer Thierry Mugler.  Mr. Pearl now lives in Paris where he makes corsets for many famous designers. 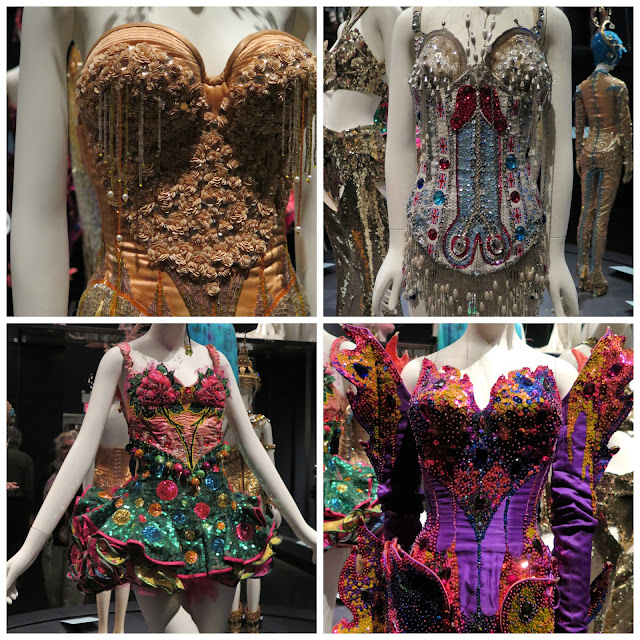 One of the rotating displays in the exhibit features some of the corsets that Mr. Pearl has designed for Bartsch, including the one she wore to the first Love Ball (bottom left).  Pearl does not use any modern technology to create his pieces, and they can take several months to construct. 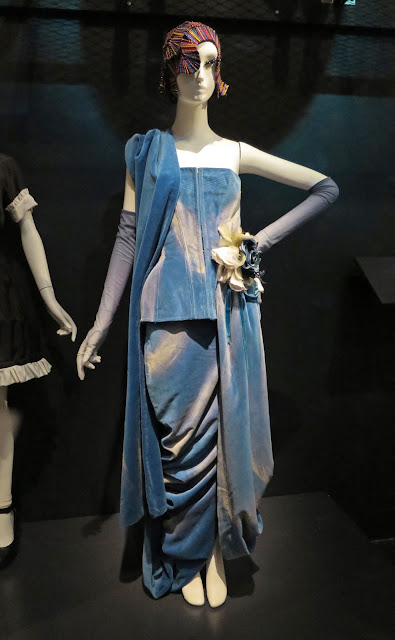 I'll end this post with a quote from Bartsch regarding social media, taken from an interview with Lilah Ramzi for Vogue.com

I am constantly changing myself, and I don’t like the idea of standing still or looking back. The change of social media is the greatest. It’s a good thing, but it also kind of cheapens things. You Instagram a picture with a celebrity and everyone thinks you’re amazing when you might be uncreative and uninteresting. I have to say if one thing is lost, it’s the moment. You go somewhere and there are photos. This square [points to her mobile] is running people’s lives and it’s scary. People aren’t in the moment anymore, they’re on their phones. Constantly. There is no surprise of what is underground. The underground needs time to fester, and so it’s a very strange time. Now you don’t even have to go out to date, you have Tinder and Grindr. There’s nothing you have to go out for anymore other than dancing. Thank God dancing is the one thing you can’t do on your phone!

The exhibit runs until December 5th, and admission is free.  If you can't see it in person, you can take a 360 degree virtual tour of the exhibit here.
Posted by Forest City Fashionista at 7:34 PM