Over the last several years, my hair style has become the thing for which I'm most recognized for -  I thought it might be fun for you (and me) to see some of my own personal "hairstory" in photos... 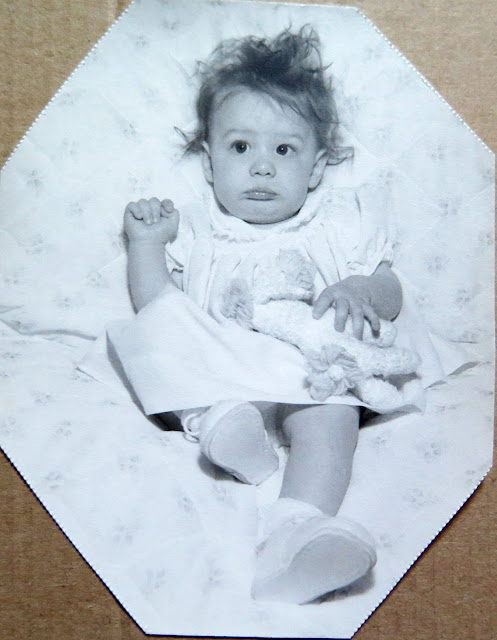 Yes, that is me, back when I could be called "cute".  Even at that tender age, you can tell that I was doing my own thing when it came to my hair. 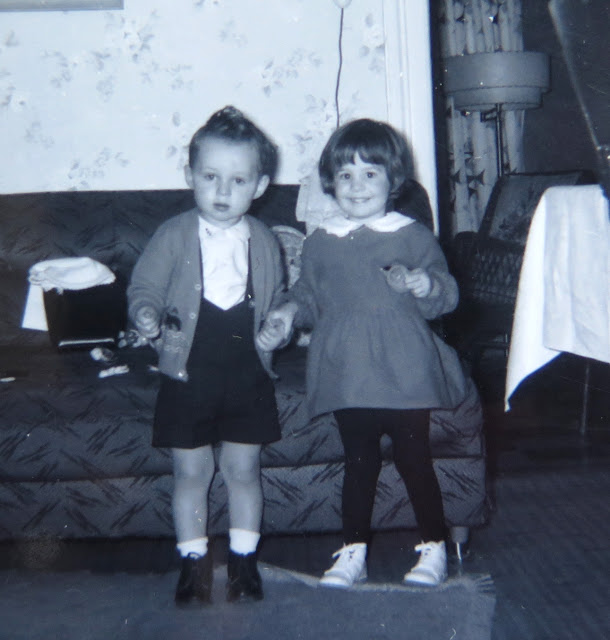 Again, still cute at age three, and one of my favourite photos from my childhood.  I'm clutching the arm of my cousin Jeff, who was a year younger than I, and who, along with his two younger brothers, would become my playmates during the summers.  I suppose you could describe my hairstyle as a "bob". Saggy crotch leotards would become the bane of my childhood existence. 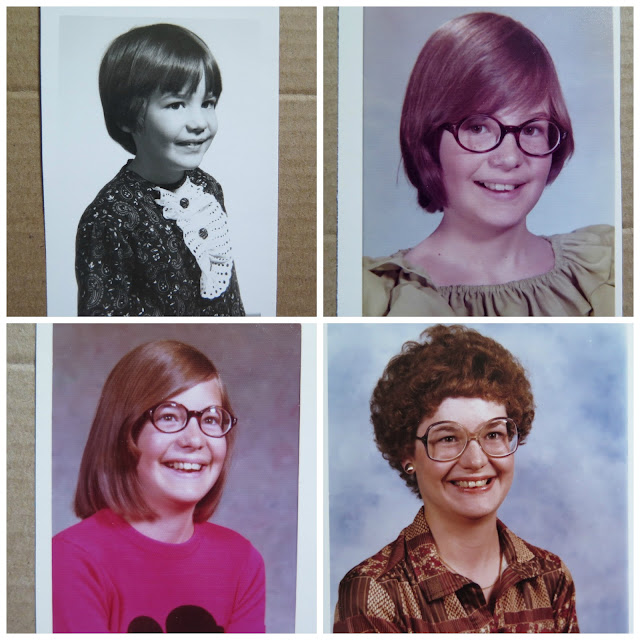 Throughout public and secondary school, my hair went through whatever style was deemed workable for fine, straight hair, even the ghastly all-over perm.  While I was growing up, long hair was the norm for girls, while mine was mostly short, except for around Grade 5 (bottom left), when it reached shoulder-length.  I think my mother most likely did not have the time to spend on the maintenance that long hair required, and by the time I was old enough to make my own hair style decisions, I don't remember having any strong desire to grow it out. 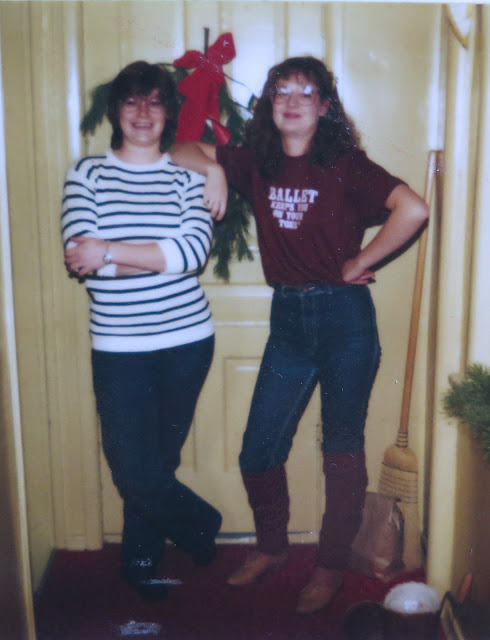 Then I graduated high school and I moved away from home to go to university in London, Ontario, and for some now-forgotten reason, I decided to not only grow my hair, but also get it permed.  This is the only photograph I have documenting that brief experiment, from around 1982.  I was taking dance classes at university and if my technique and flexibility were not impressive, I was at least determined to look the part - note the Ballet-themed t-shirt, leg warmers, and jazz oxfords (I'm surprised I'm not wearing an off-the-shoulder flashdance sweatshirt).  That's my friend Joanne on the left. 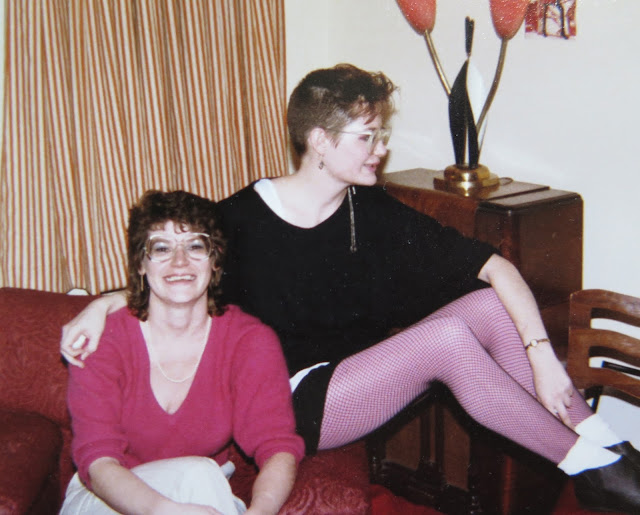 What a difference three years make!  Joanne came to visit me in London around 1985 after I graduated university and got my first apartment on my own.  I was working in a record store, and had embraced my inner punk (I was especially happy with my black fishnets over pink tights look).

From that point on, aside from a short-lived Louise Brooks style bob in my early 30's, my hair stayed very short, and the experimentation with colour began.   I soon discovered that having close-cropped hair meant put me on the receiving end of comments like "what are you, a dyke?", or the unimaginative  "Freak!"  It could be pretty upsetting at times, but oddly enough, it didn't make me grow my hair.   More than one boyfriend wistfully askd me if I would let me hair grow, and some guys felt it necessary to point out that "I would be prettier with long hair". 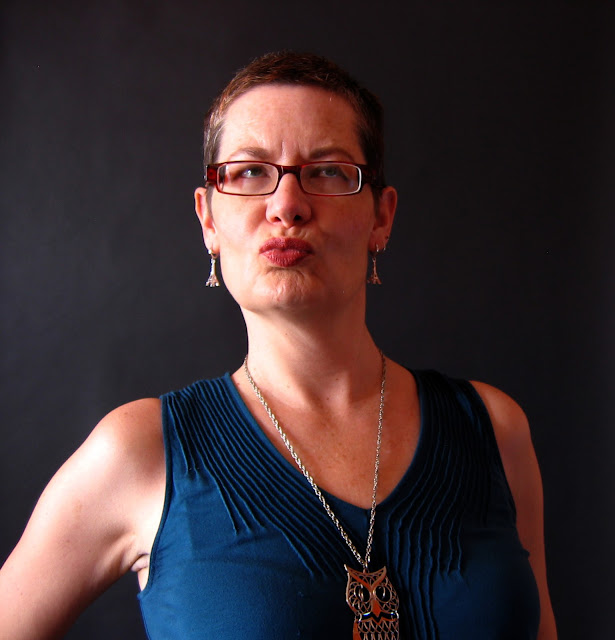 I kept it short, and it made me feel rather sassy 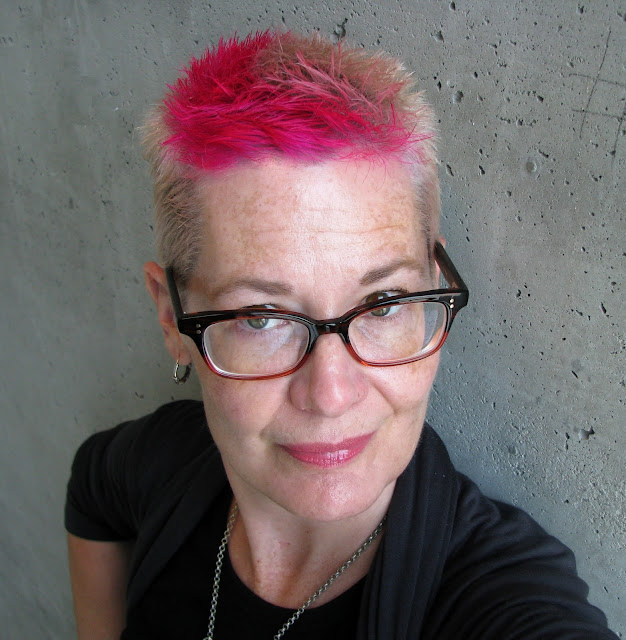 I bleached it blonde in 2008, and when I finally realized that was not the most flattering colour choice for me, I added hot pink. 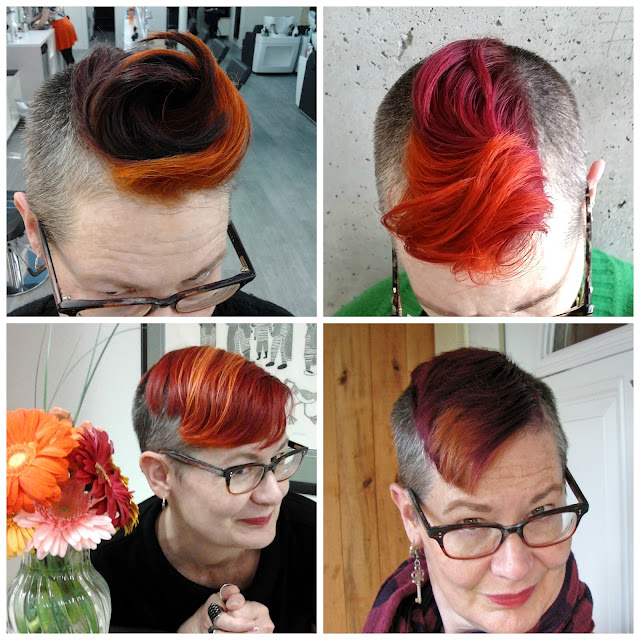 For the last few years, I've had the "shaved back and sides, long on top" style, and it feels very much like "me".  I stopped colouring it all over about 3 years ago and the "natural" sides and back let me get used to the incoming grey, but still gives me a long piece on top to play with, and as you can see from the photos, I've tried a few different colour combinations.  It's interesting to note that I don't get called a "freak" anymore because of my hair - most people's reactions are very positive - but the assumption is still made that I'm a lesbian because of my hair cut.  When I moved into my current apartment 3 years ago, a neighbour informed me (after we got to know each other) that he has assumed I was gay before he met me because I had a "lesbian hair cut".   And I didn't know such a thing existed! 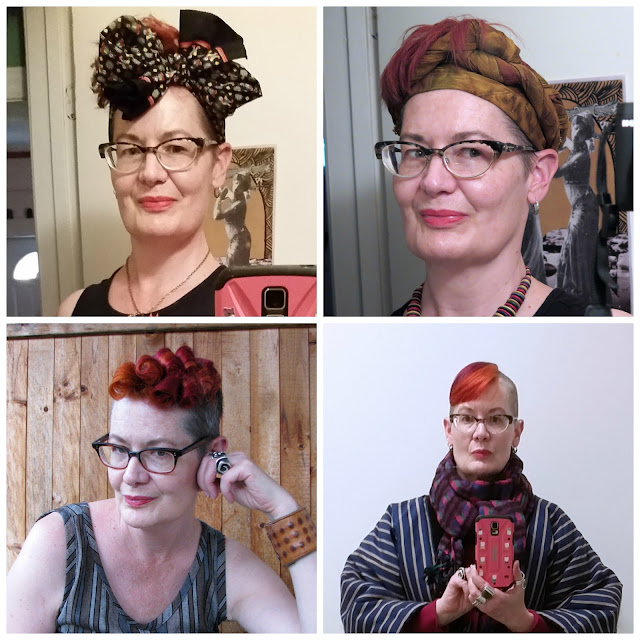 I was surprised at how versatile a small chunk of hair can be - I can wear it down and straight, up in a swoop, curl it, and experiment with scarves and other headwear. 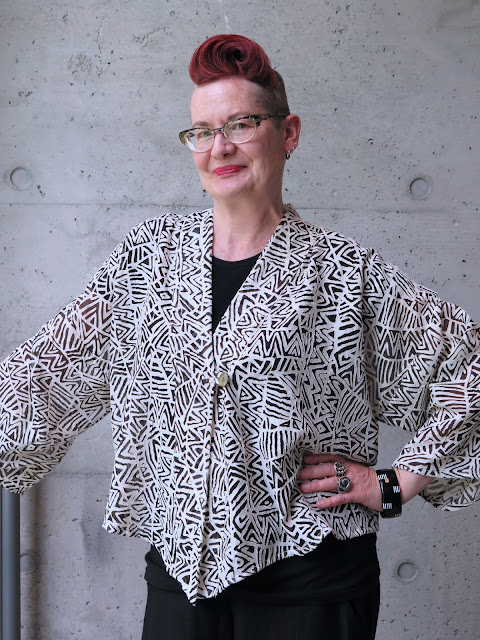 My favourite?  The Big Swoop - it takes a bunch of hair product, some time with the blow-dryer and a near-toxic amount of hairspray, but the end result feels like I am wearing a piece of sculpture on my head.

Have you had a hair evolution, or have you remained true to a specific style/colour for most of your adult life?
Posted by Forest City Fashionista at 8:12 PM