You're Never Too Old to be a Groupie

A regular reader of my blog approached me at my desk at work on Friday and pointed out in a tone of gentle reproach that I had not posted since July 1st.  The only excuse I have to offer is that I've been laid low by an intestinal infection that won't seem to go away, and although tired and dehydrated, I've been able to go to work, but when I get home, all I want to do is sleep or lie on the couch and watch NetFlixx.  However, I did manage to spend some time at Sunfest last weekend, and saw a wonderful band who inspired this blog post, and reminded me of what it was like to fall in love with a band.

I spent most of my 20's working in new and used record stores, which was considered one of the coolest jobs a twenty-something could have.  I spent my shifts listening to music, and at night, I would go to hear local indie bands play at one of several downtown clubs.   Most of the other staff were music fiends as well (the only real reason for working in such places, as the pay was minimum wage with no benefits) and during my time at one of the cities most popular used record stores,  I frequently would find myself in competition with a colleague over a mint-condition, gatefold-sleeve album from a band we both loved that had been in a pile of records we had purchased from a customer.

For a couple of years, I also had an hour long show on the local university radio station.  The first featured music that had been written for, or featured in, a particular film.   After a year, I switched to the theme of women in Rock and Roll.   I have no idea if anyone listened to my shows, as I didn't take requests, so no one ever called in during my shift,  and the challenges of equipment that failed at inopportune times and fellow volunteers who didn't show up for their shift made the experience nerve-wracking at times, but I had a lot of fun in that booth with just me, my headphones and my records.

Then at some point,  I got a "real" job, and couldn't listen to music all day, or stay out until 1:00 am watching a band, my passion moved to other things. However, every once in a while, I come across a band that ignites that spark again...

DakhaBrakha is a quartet from Kyiv in the Ukraine that began as a theatre project in the Dakh Theatre for Contemporary Arts in Kyiv.  I had seen them perform a couple of years ago at Luminato in Toronto and when I heard they would be playing at Sunfest here in London, I was excited to see them again, as the music they played was unlike anything I had heard before.  The above video is a brief snippet showing off the talented trio of women in the band. 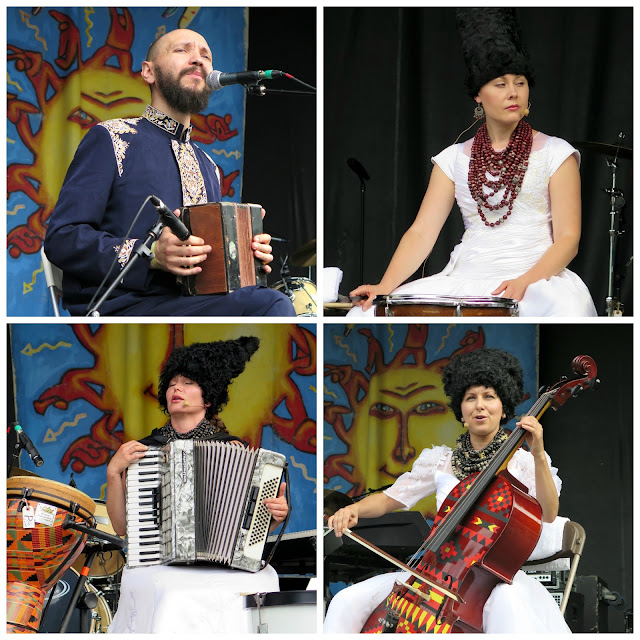 The band defines itself as "ethno-chaos" and Marko Halanevych, the front-man for the band, has been quoted as saying “We decided to create a new style of music that consists mainly of our native Ukrainian folk motifs, with some African-styles added in. We also combine Arab, Bulgarian and Hungarian ideas. Dakha Brakha collects the components of its repertoire during our expeditions. We go out to villages, pitch our tents and visit local babushkas and ask them to sing their folk songs. We record them and use them in our compositions.”


Each band member plays at least four instruments, and has an impressive vocal range.  I shot the video above while they were playing a very atmospheric instrumental piece that was like a soundtrack for a walk in a strange, dark forest.  They also play percussion-driven songs that got the audience on their feet dancing, and hypnotic, mesmerizing tunes that inspired one to drift into a blissful trance. 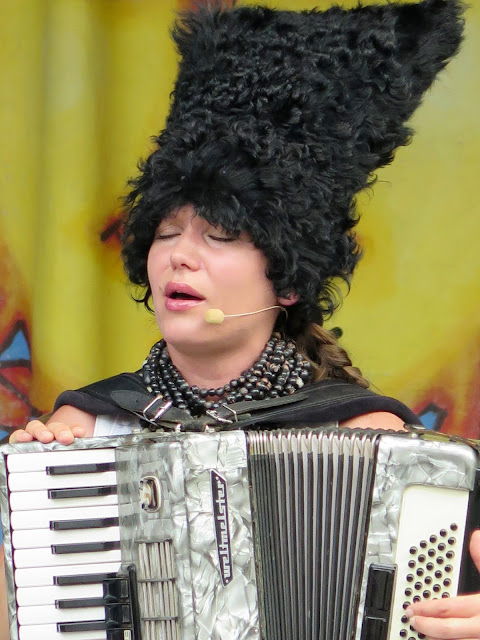 Irynya, above, is also an actress, and has played Ukrainian folk music since she was a child.  She is the English-speaking spokesperson for the band.  All three women have 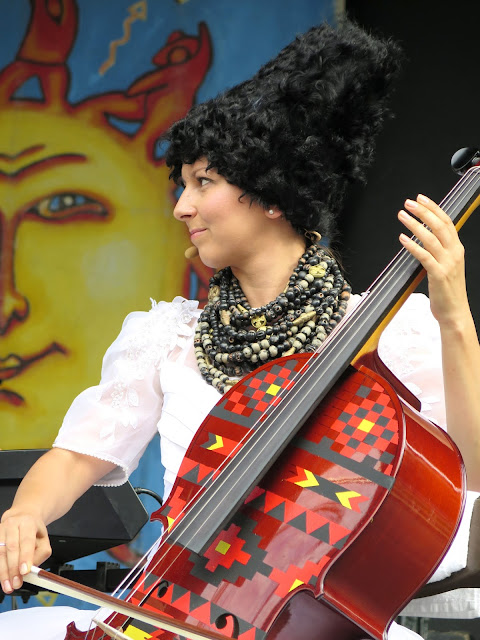 Nina is a self-taught cellist, and at times she plucked the instrument like a bass, strummed it like a guitar, or sawed at it furiously.  At one point she performed what sounded like a Ukrainian rap that delighted the audience and although she was physically small, she had a huge presence. 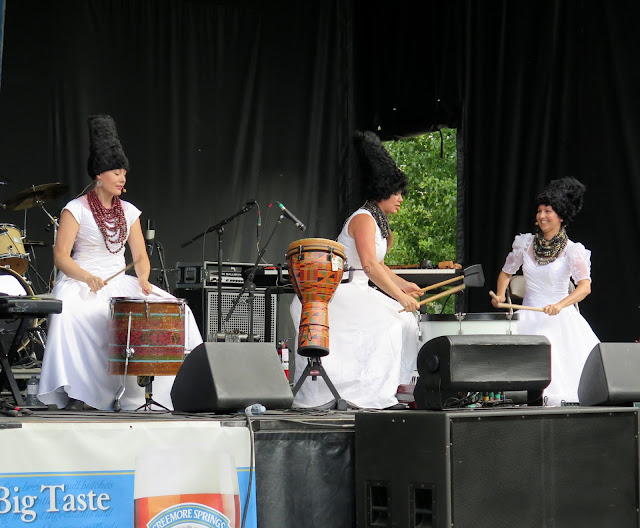 As much as Marko may be the front man of the band - and a multi-talented front man he is, providing vocals, and playing accordian and tabla - the women are definitely the audience focus.  They have been playing together for many years, and are graduates of the Ukrainian Folklore and Culture Faculty at Kyiv University.  The trio's complex harmonies, combined skill at playing multiple instruments, sense of humour, and the obvious joy they find in what they are doing is captivating.  It's easy to imagine them as characters in a folk tale in which three strong, talented, and beautiful women escape from their respective arranged marriages by running away from the altar in their wedding dresses, and decide to travel together bringing joy and music wherever they go. 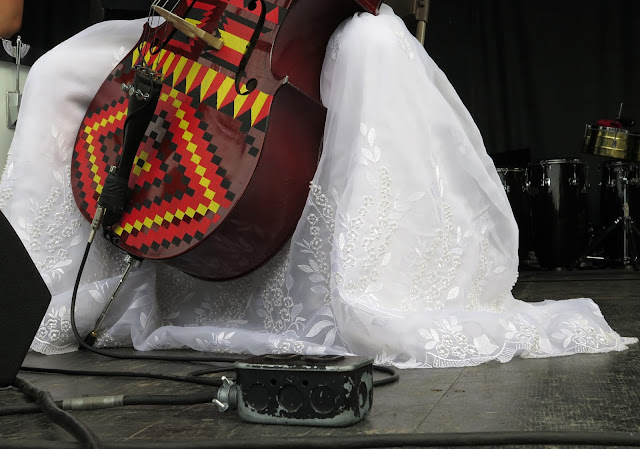 Nina has decorated her cello with a traditional Ukrainian pattern and I thought it looked beautiful against the background of the skirt of her vintage wedding dress.   After their first show on Friday night, I stayed and chatted with Nina for a few minutes and we discovered a mutual love of thrift-shopping and unusual clothing. 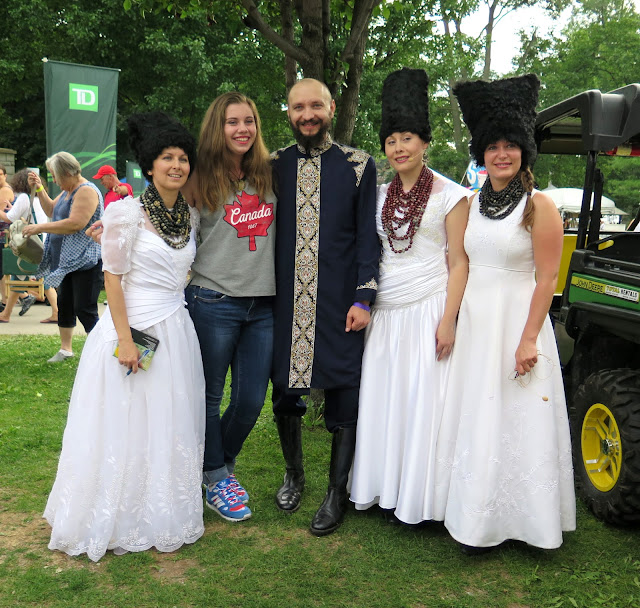 Members of the local Ukrainian community came out to support the band, some bringing a Ukrainian flag to wave during the performance.  The young woman second from the left was one of several young woman who asked to have their photo taken with the band. 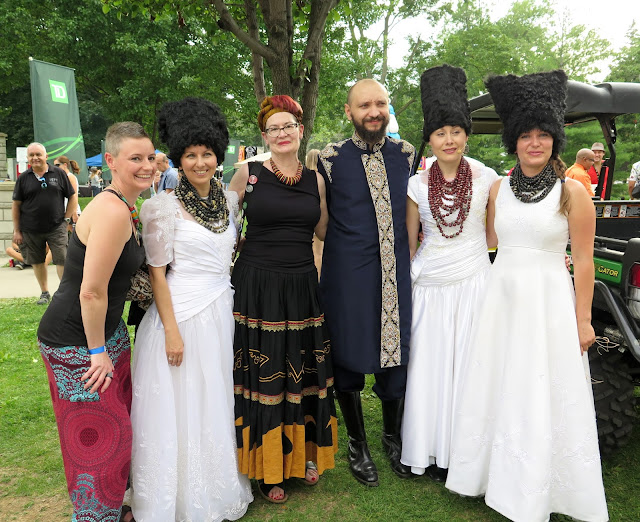 And then there was this not-so-young woman who also wanted a photo with them... 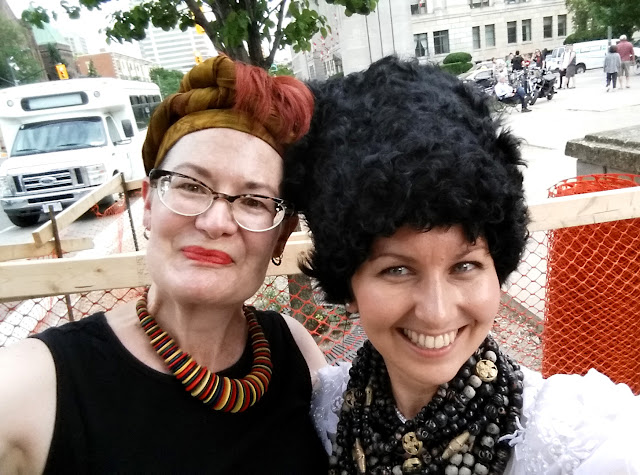 and an obligatory selfie with Nina.  I really need to relax my neck muscles when I smile...

Which all proves....you're never too old to discover your inner groupie!  If you get an opportunity to see DakhaBrakha perform,  take it - it will be a musical experience that you won't forget.  Below is a video of their NPR Tiny Desk concert that shows off their unique vocal styles.