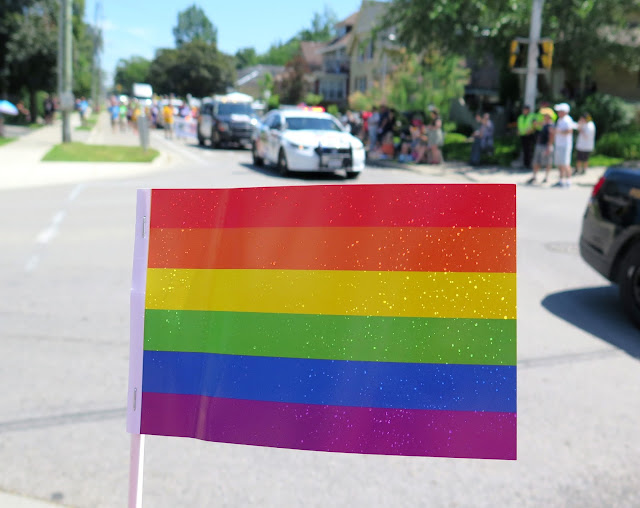 It was London's 21st Annual Pride Parade today, which ends 10 days of events celebrating Pride London.  Some years I walk in the parade, but this year, I decided to join my neighbours, Sarah and Mario, on their porch and be a spectator. 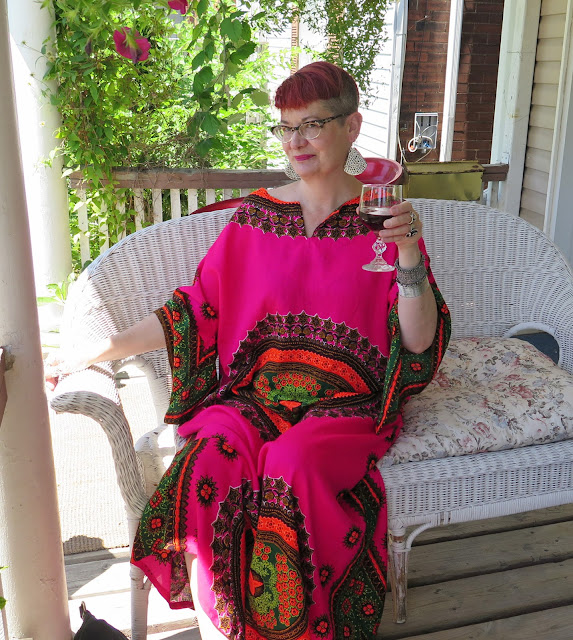 There's no reason to not dress up just because you are watching instead of participating.  It was just the occasion for this retina-burning caftan I picked up at Red Light Clothing Exchange in Portland.  I watched most of the parade from the sidewalk so I could take photos, and people said they could see me from down the block. 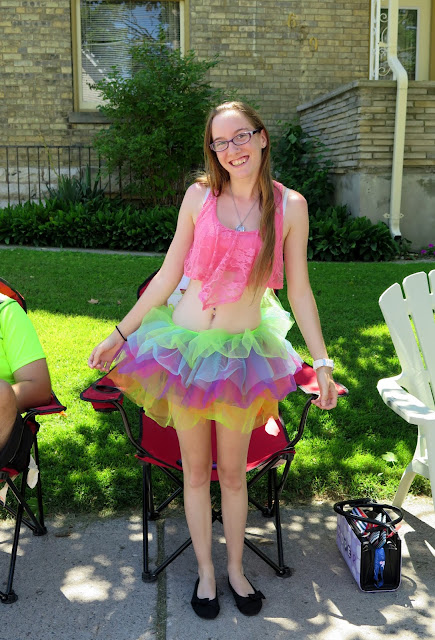 This young woman was sitting across the street from us, and she obviously agrees with my philosophy that you don't have to be in the parade to wear your party clothes. 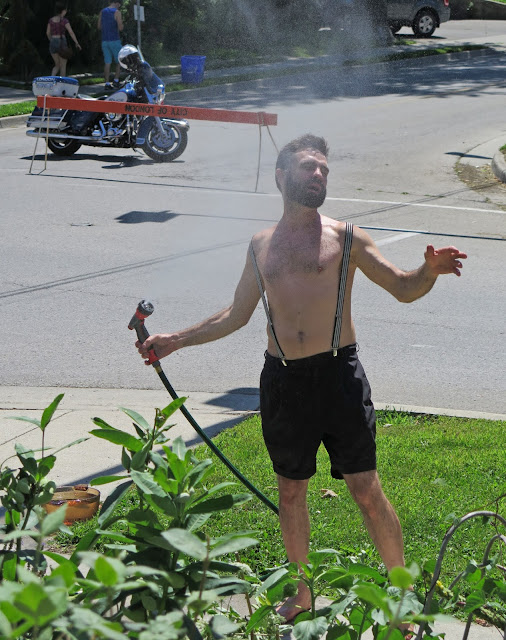 It was a very hot, sunny day and Leif, who was part of our porch party, cooled off with the hose while waiting for the parade to start. 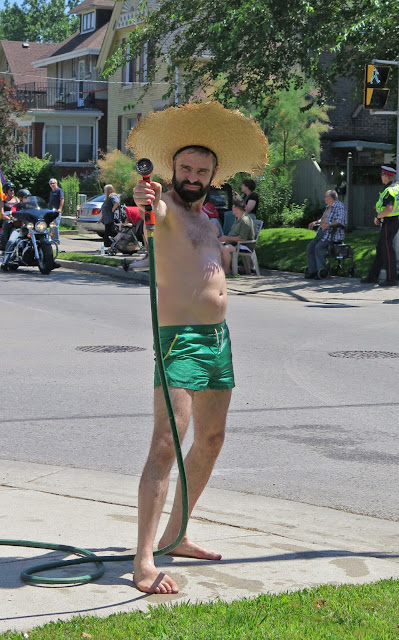 As soon as the parade was in sight, he promptly changed to his "Mr. Cool" outfit.  He quickly became the most popular guy on the parade route. 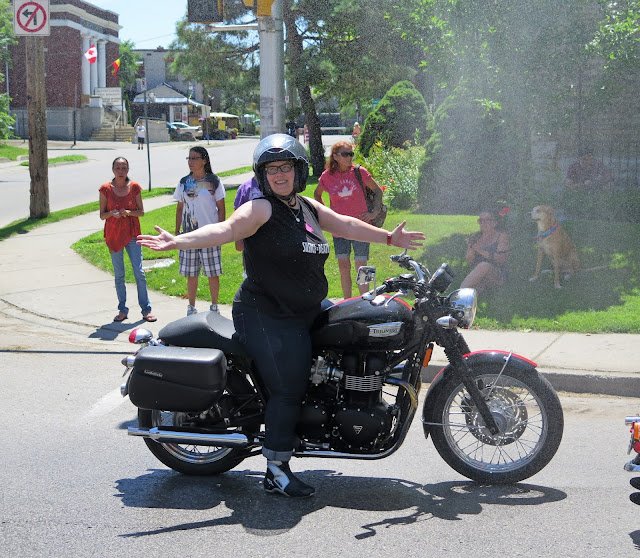 The Dykes on Bikes always lead the parade, and this woman welcomed the relief of the spray from the hose. 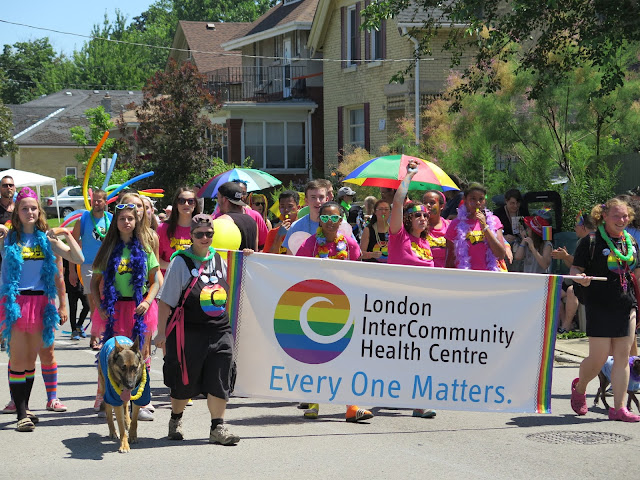 The parade route goes right through my 'hood (Old East Village) and includes representation from many local service organizations like the London Intercommunity Health Centre, which is based in Old East. 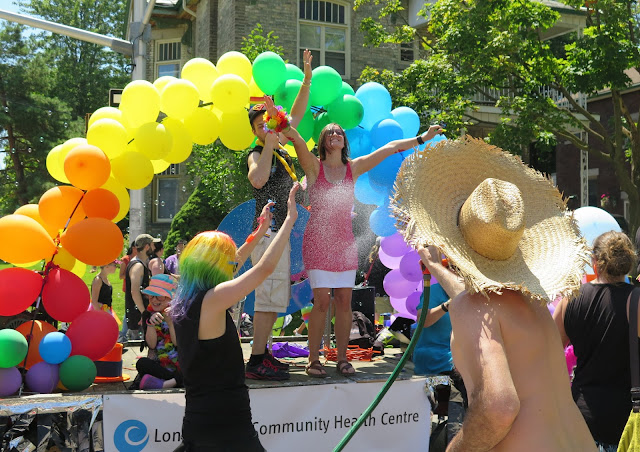 No one was safe from the madman with the hose, and almost everyone was very appreciative. 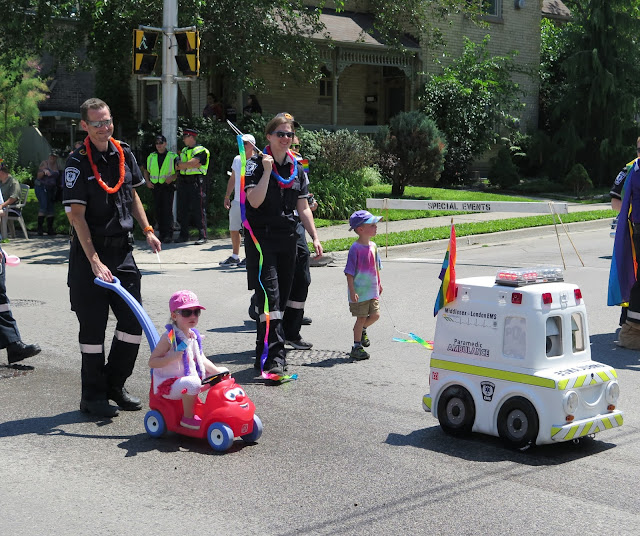 The parade has become a very family-friendly event with many kids walking in the parade with their parents, or lining the streets to watch. 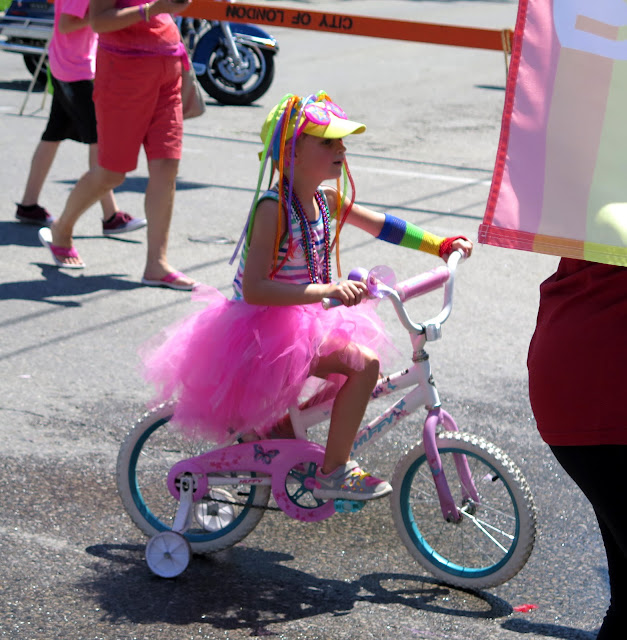 The kids know how to have fun getting dressed for the parade. 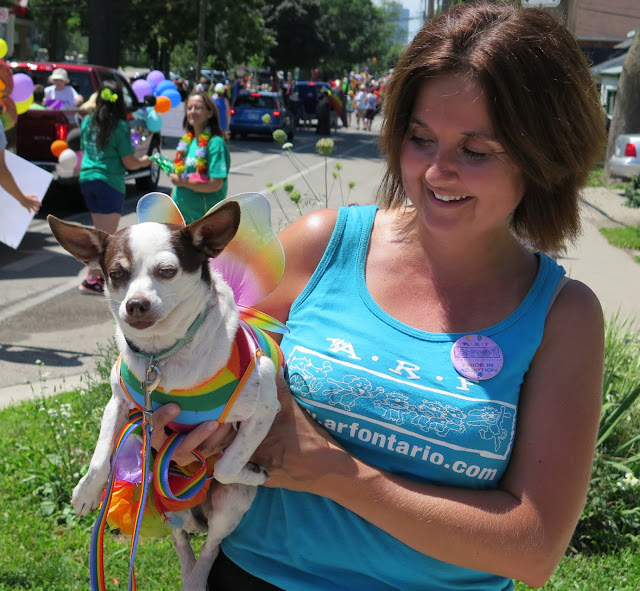 Pets are welcome too, although some seem less than enthusiastic about the outfits. 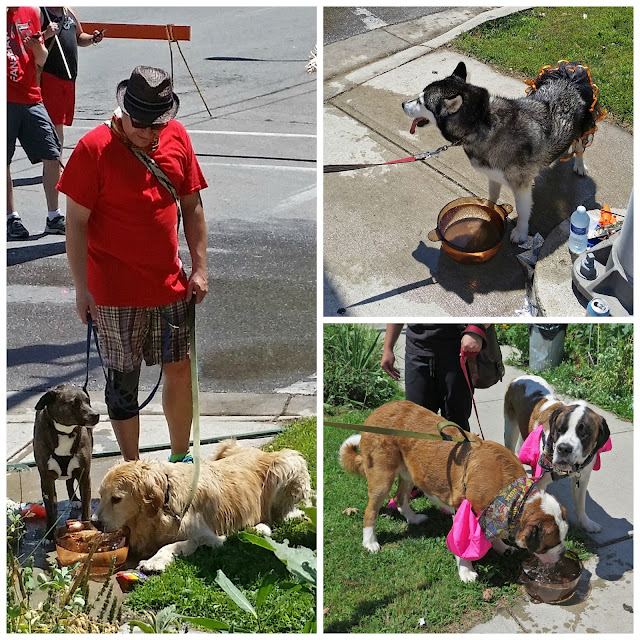 Because of the heat, Sarah had put a bowl of water on the sidewalk for thirsty canines, and some owners asked Leif to spray their dogs to cool them off. 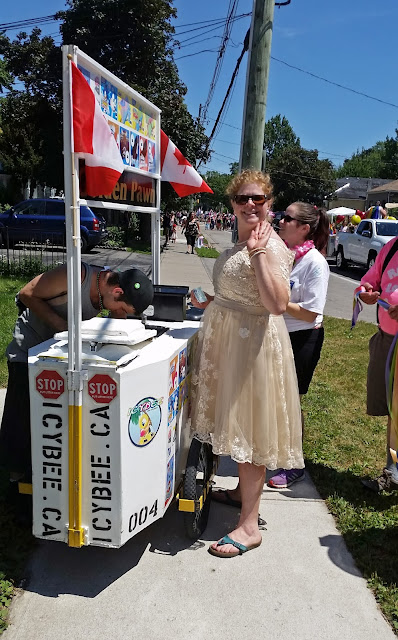 The dogs weren't the only ones feeling the heat - this woman jumped off the float she was riding on when she spied the frozen treat wagon and then jumped back on once she had her ice cream. 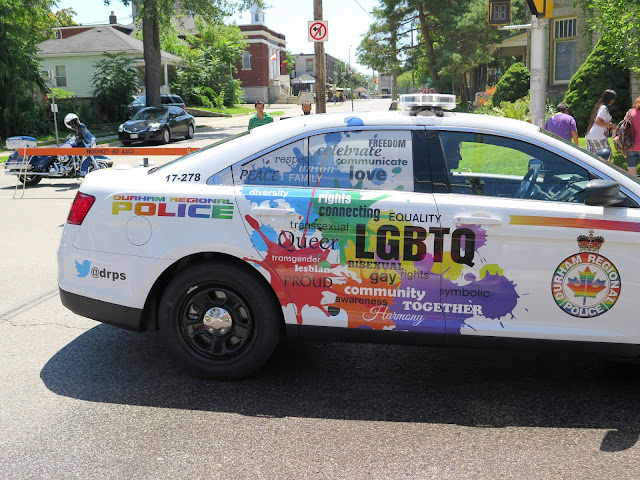 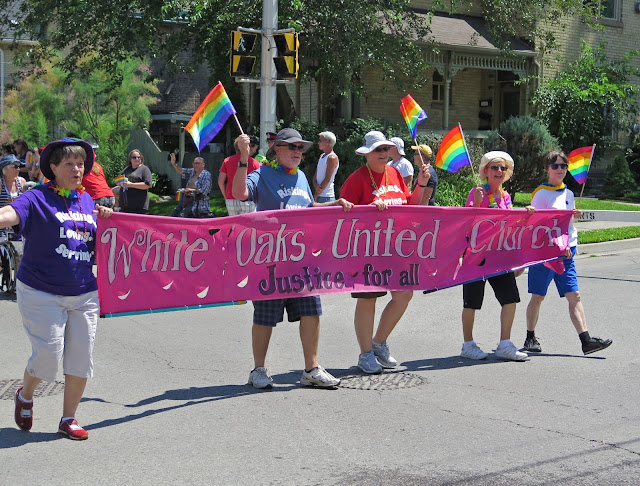 Each year, more churches are represented in the parade, which makes me think that there is still hope for organized religion. 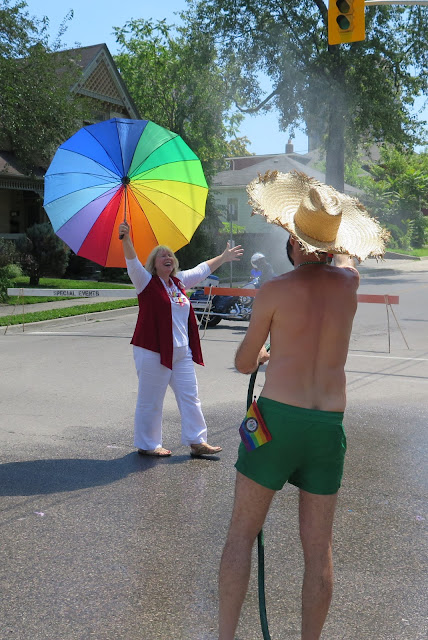 I love how happy this woman with her rainbow umbrella looks while getting "misted". 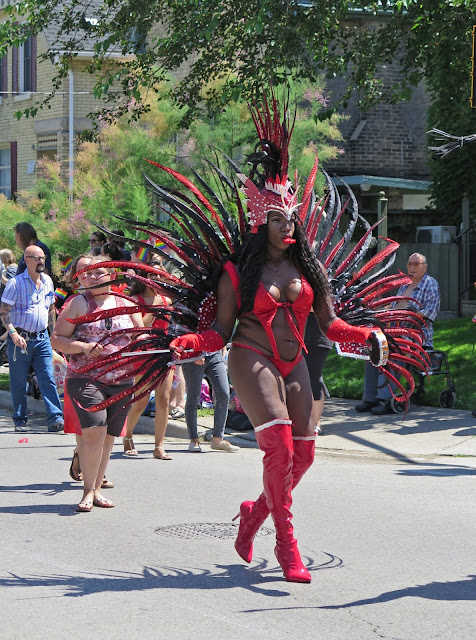 This woman makes the most fantastical costume every year for the parade, and each year I forget to get her name.  If you know her, please leave it in the comments!  She also gets major props for walking the entire parade route in heels. 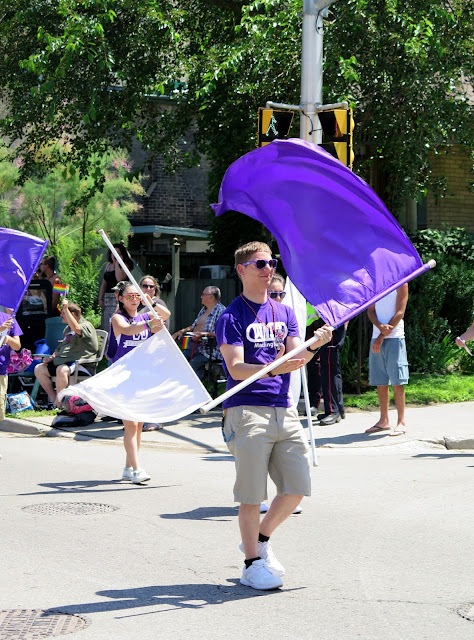 For the second year, my employer, Western University, had an official presence in the parade, lead by the flag twirlers from Western's marching band. 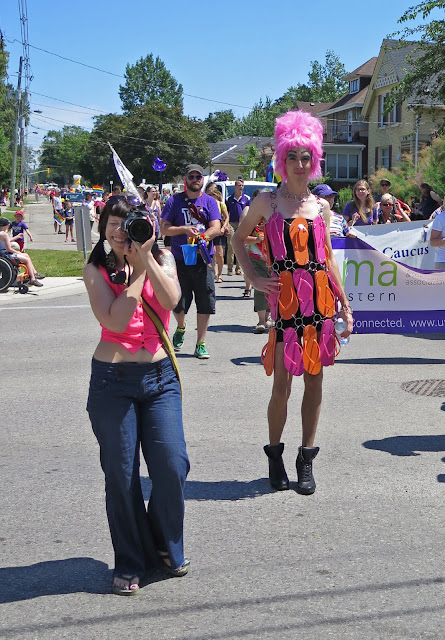 I was trying to grab a photo of the guy in the fabulous  Priscilla, Queen of the Desert costume and was photographed in the process.  I made one of those flip-flop dresses for a contest when the movie came out, but it didn't look as good as this one. 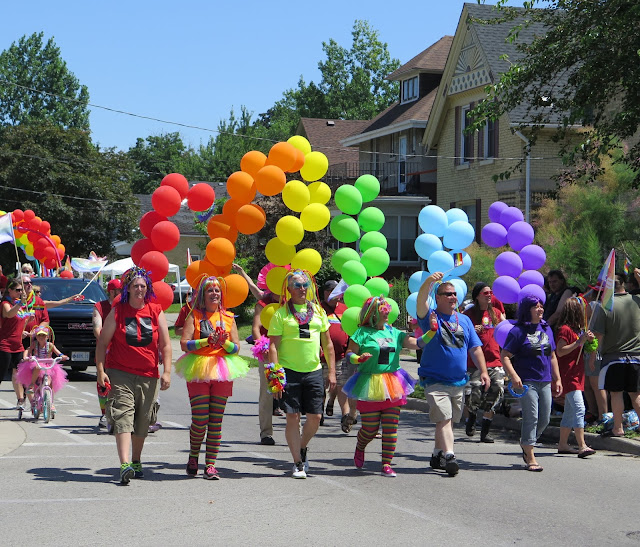 The Pride Parade is easily the most colourful parade we have in London. 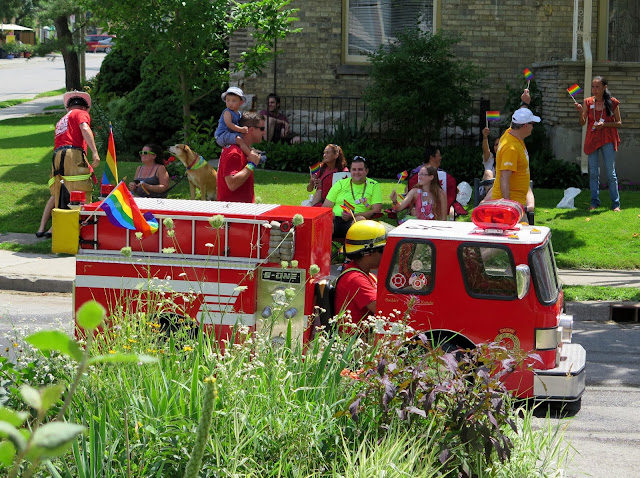 The London Firefighters usually end the parade, and get lots of cheers on the parade route (Firemen, hello!) and this year there was a mini-version of their truck in addition to the full-size one. 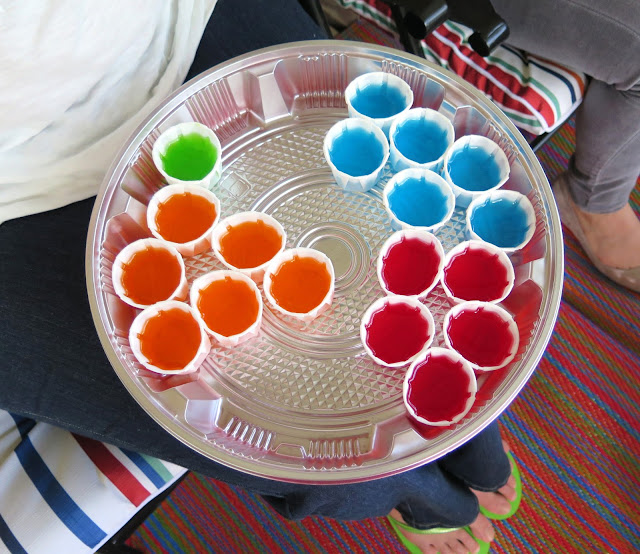 Sarah and Mario know how to throw an excellent Pride Parade porch party!  In addition to snacks, wine, and other beverages, we were treated to jello shots, which for some reason seemed way more appealing now then they ever did 20 years ago!  I may have had a few.   Thanks so much for inviting me over!
Posted by Forest City Fashionista at 6:55 PM