I can't believe that an entire month has passed since I was in Portland.   I really enjoy the reseach/planning part of a trip, and the anticipation of a new adventure, but then when I'm back home, It often feels more like a dream than something that actually happened, so I have to remind myself by looking at photos and remembering how I felt at that moment.  There were so many wonderful, happy moments during my visit with Krista and exploration of Portland that I had to do one more blog post before it becomes just a distant memory....


The impression I had after spending three days in Portland was that there is a serious obsession with food, and as far as I'm concerned, that makes a place even more attractive to visit.    Krista took me to a couple of cool neighbourhoods, and each one was chock full of delightful little restaurants and food trucks.  You could pretty much find any kind of food you could possibly want to eat. 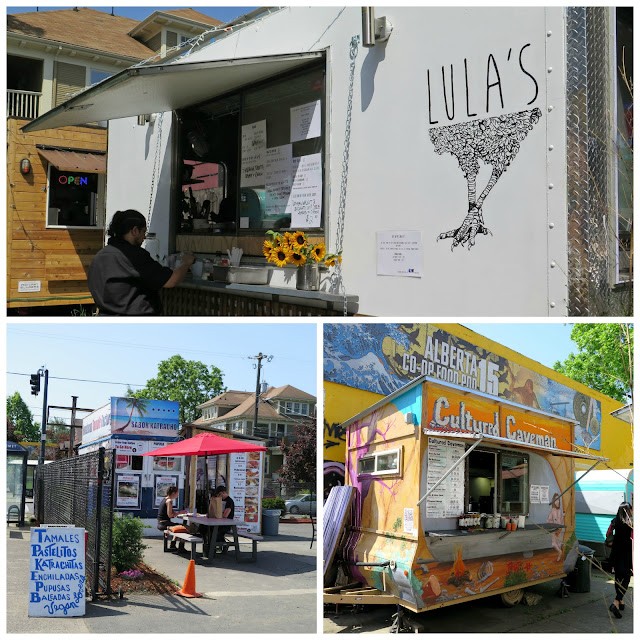 In the neighbourhoods we visited, there were several parking lots that were home to one or more food trucks.  I'm used to the one or two food trucks we have at home that sell Souvlaki and grilled cheese sandwiches, but in Portland you could get almost any kind of food you wanted, from omelets and quiche at Lulas, tamales and enchiladas, to meatloaf and collard greens at the Cultured Caveman.   Unlike in my hometown, it is not expensive to get a license to operate a food truck in Portland, and as they seem to co-exist peacefully with the restaurants in the neighbourhood, Portland has wisely realized that not everyone has the time or the money to eat a sit-down meal in a restaurant for lunch. 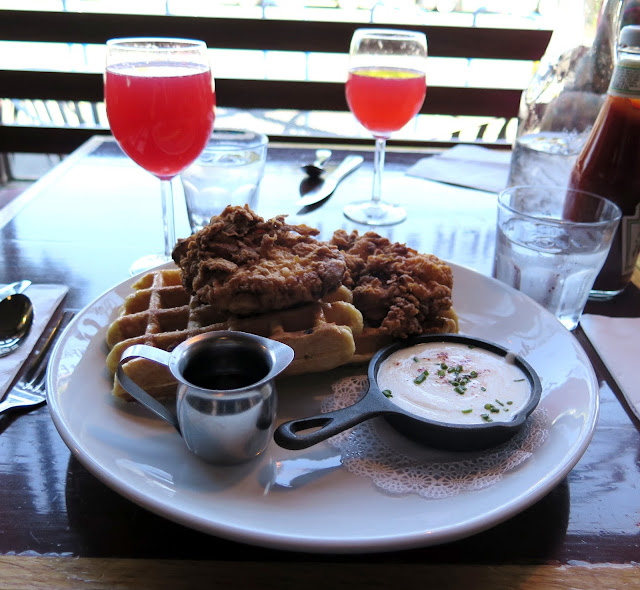 My most memorable meal - the chicken and waffles I had for breakfast at  Bread and Ink Cafe on Hawthorne Street.   The restaurant, which has a "Waffle Window" on the side, is known for their chicken and waffles, and I was not disappointed.  The chicken was juicy, the coating crispy, and the waffles were fluffy and crispy on the outside.  It came with a yummy parmesan lemon dipping sauce for the chicken, and we ordered blueberry basil mimosas (although I couldn't taste the basil) and I was in breakfast paradise.

There seemed to be more little pizza joints and coffee places than I've seen anywhere else.  I don't drink coffee, but I do eat pizza, and the one we had for dinner one night was delicious. 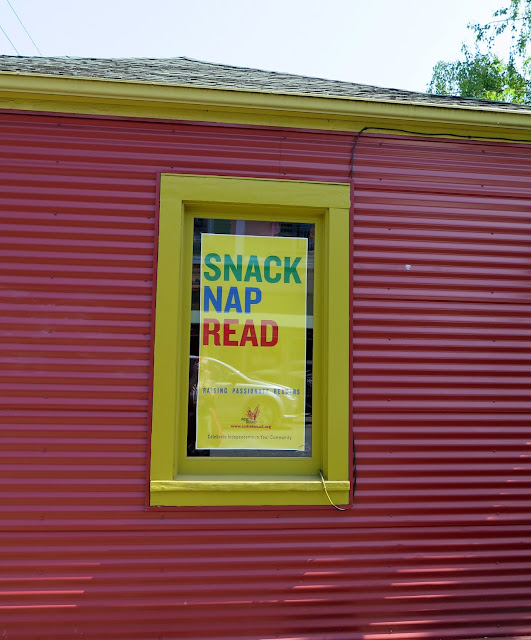 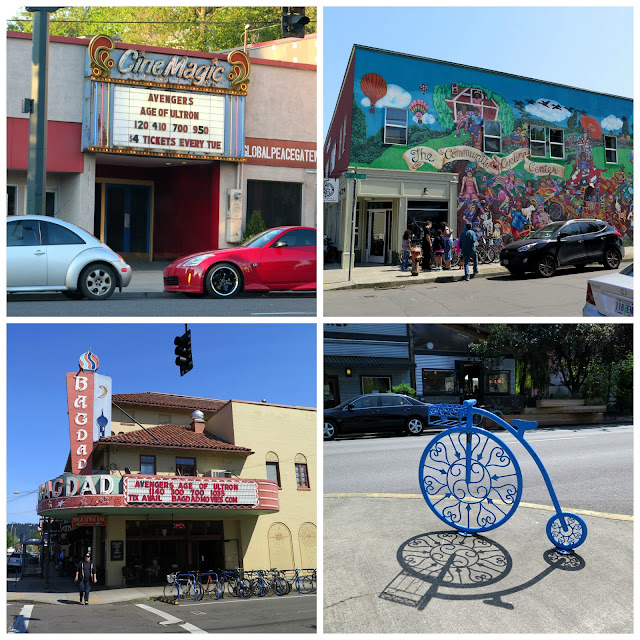 We spent most of Saturday in the Hawthorne district, in Southeast Portland.  According to the website Travel Portland, Hawthorne Boulevard is where "Hippies and Hipsters mingle...".  There was a very eclectic and relaxed vibe, and many amenities that would make it a very attractive neighbourhood to live in.   You can enjoy a craft brew and pizza while watching a flick at The Bagdad Theatre, originally opened in 1927, and full restored in 1991 by Portland Brewers, the McMenanin Brothers.   The CineMagic Theatre, top left, opened in 1914, and shows second-run films and classics as well as new releases.   Cycling is extremely popular in Portland, which has earned it many "bicycle-friendly city" awards.  The Community Cycling Center (top right) is a non-profit organization that sells new and used bikes, operates a repair shop, and offers bicycle educational programs for kids and adults. 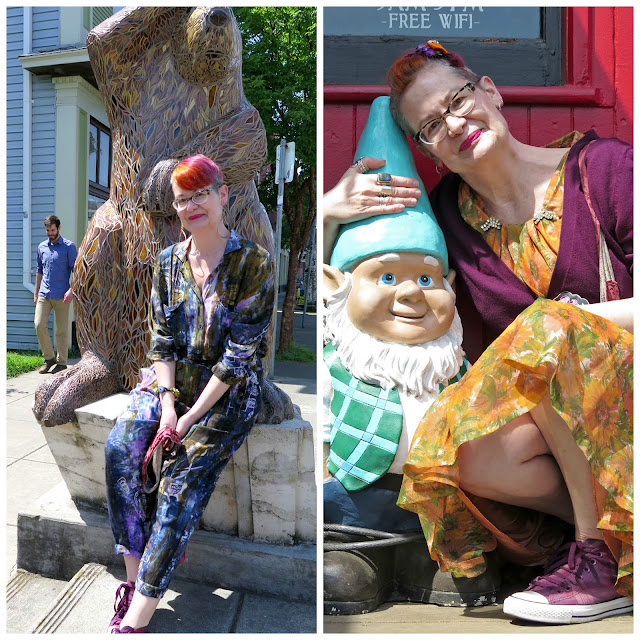 There were fun things to look at everywhere, and I had to pose with some of the street art.  I wasn't sure if the animal statue behind me on the left was an otter, a beaver or some other critter. 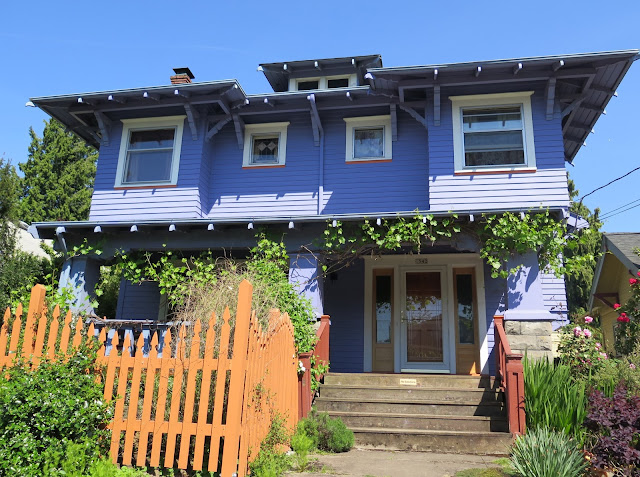 The majority of the houses are made of wood, being the most readily available building material, and many were painted pretty colours. 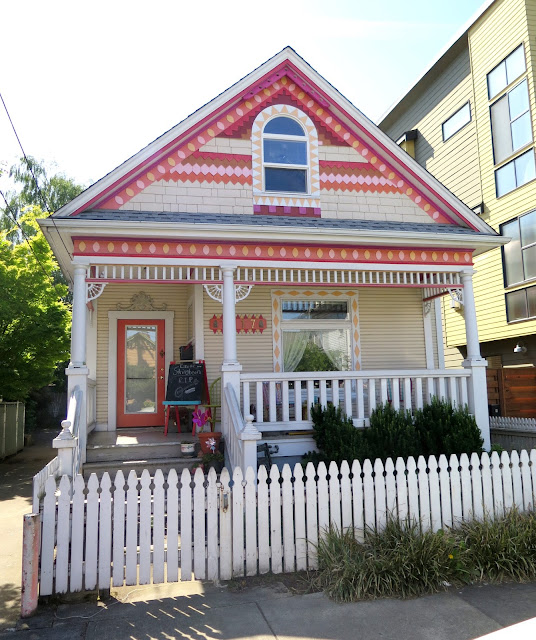 This little house appears at the beginning of an episode of Portlandia (I be you were wondering when I was going to mention that show).  The sign on the easel on the front porch said "Estelle and Stringbean R.I.P".  Whoever they are, they were obviously missed. 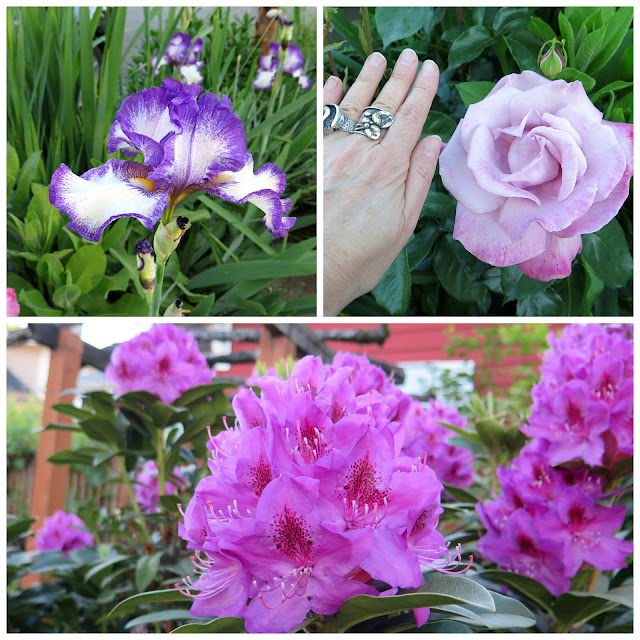 Even though the roses in the Washington Park International Rose Test Garden were not yet in bloom, there were lots of other flowers to be enjoyed.  Giant Rhododendron bushes were everywhere, as were Irises, and we found athe hand-sized rose in a small garden in front of someone's house. 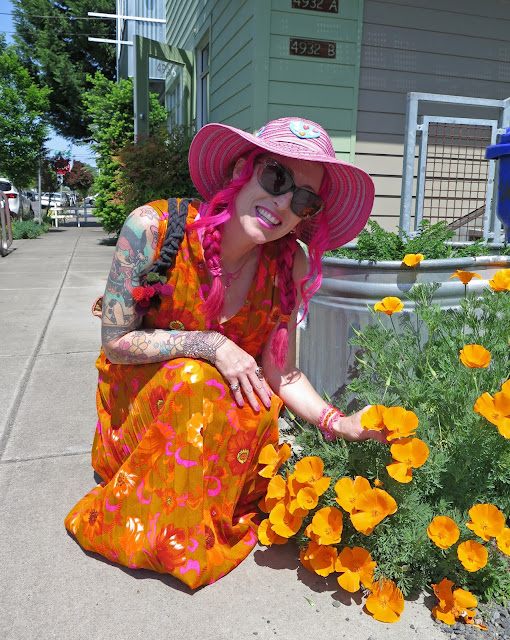 I don't know the name of the orange flowers, but they matched Krista's vintage maxi-dress perfectly 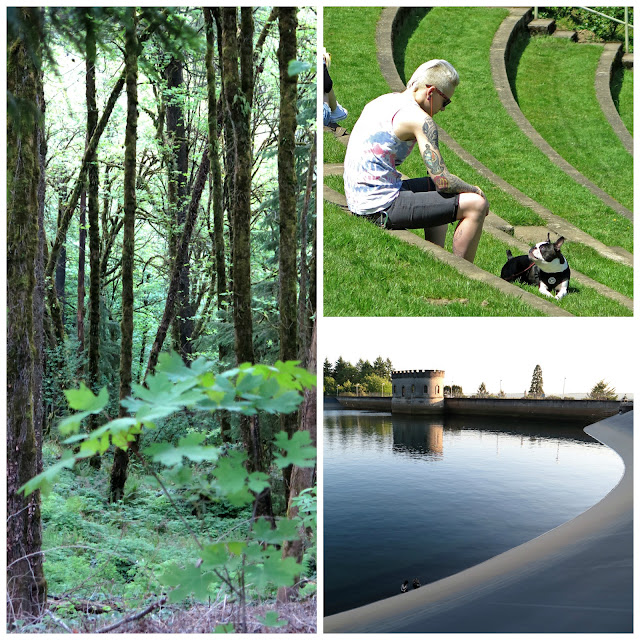 There was so much green space to be enjoyed - the trees are huge!  With lots of parks, hiking trails, and special attractions such as Wine country bike tours and Segway tours of the waterfront, Portland caters to the outdoors enthusiast.  Washington Park has an open-air amphitheatre (top right) where every year a Summer Festival takes place with musical performances, and outdoor film screenings.  On Saturday night after dinner, Krista, Cristi and I took a stroll around the Mt. Tabor Reservoir (bottom right) which was lovely and peaceful. 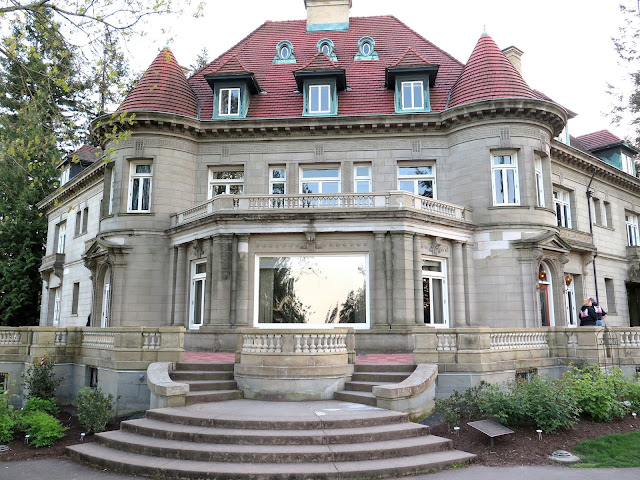 Krista took me to Pittock Mansion, built in 1914, in the style of a French Chateau, for publisher Henry Pittock and his wife.  The mansion, now a museum open to the public, is situated in the west hills of Portland and overlooks the city skyline. 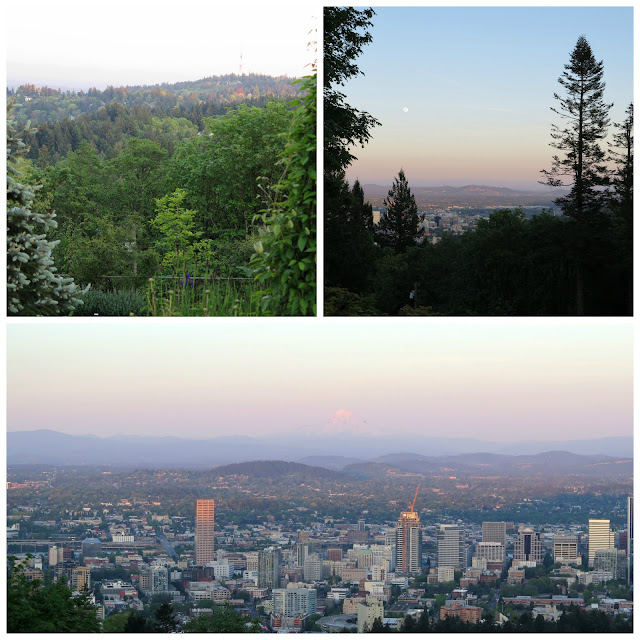 The museum was closed by the time we arrived, but we were able to enjoy the stunning view from the lawn at the rear of the house.  In the bottom photo is the city of Porland, with Mt. Hood in the far background. 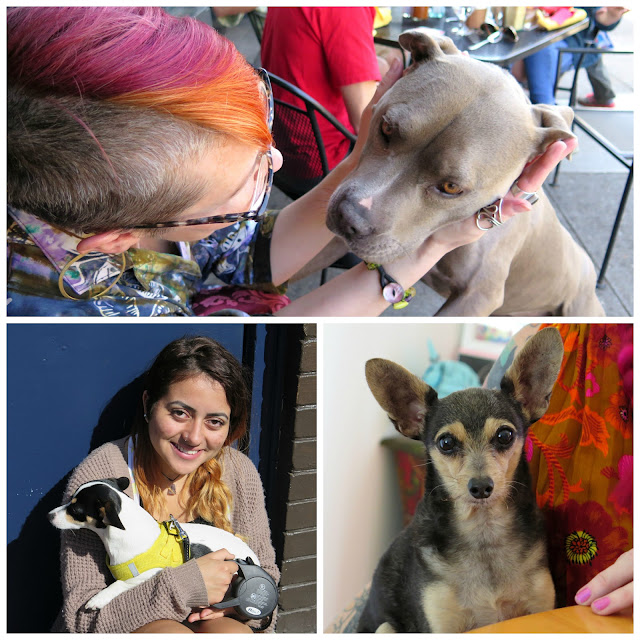 I was in dog heaven during the trip -  adorable canines were everywhere.  I fell in love with an beautiful pit bull named Lola (top photo), whose owner sat at the table next to ours when Krista and I had lunch on a patio on Sunday.  In Ontario we have had a ban on pit bulls since 2005, and owners find themselves constantly in the position of having to defend their choice of pet.  I had never been in close contact with a pit bull before, but Lola completely won me over with her gentle nature and doggie kisses.  I spent much of the weekend with Krista's little shadow, Peetee (bottom right), and we met the young woman with the lovely smile and cute pup in the bottom left photo while out shopping Saturday. 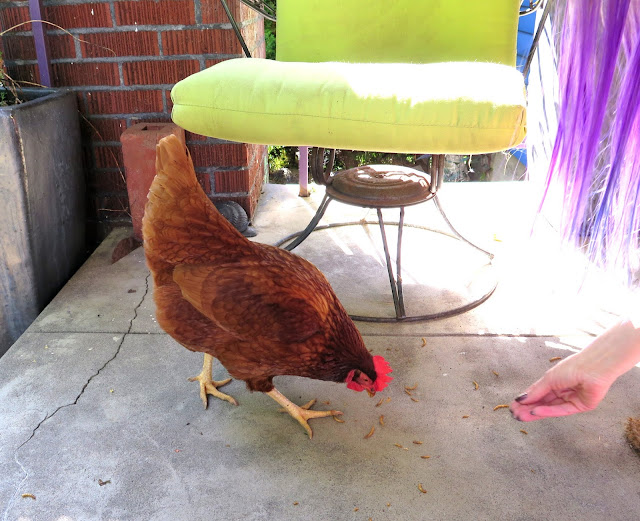 In addition to dogs and cats, there was another critter I met while I was in Portland.  Krista and I were at her friend Cristi's house, and I happened to glance out the front door and was rather surprised to see a chicken peering in from the other side.  Apparently Red belongs to the neighbours, and makes regular visits to Cristi's for a snack of freeze-dried meal worms.  Only in Portland....
And how could I forget? 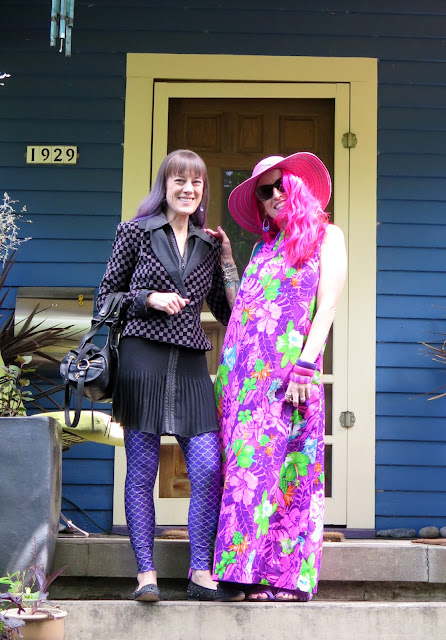 On the second day of my trip, these two crazy chicks and I were psyched for a day of shopping. 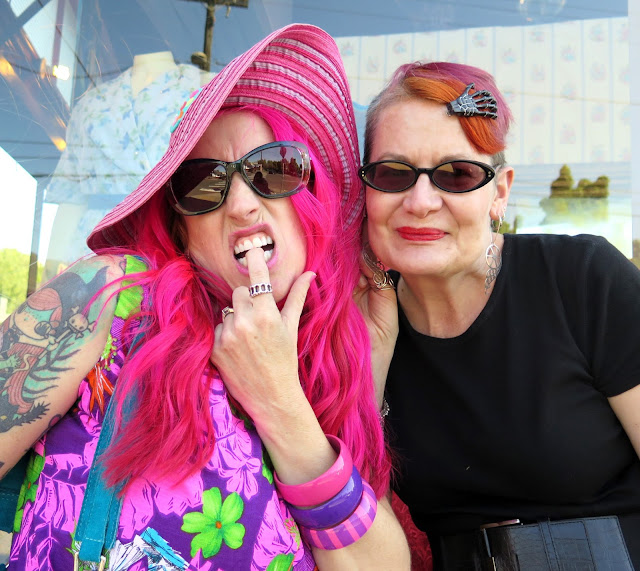 After a quick trip to Sock Dreams, where I got some fab cotton blend tights for next winter, and fortified by chicken and waffles from Bread and Ink (see food section above), we arrived at our main destination - Red Light Clothing Exchange.  I had heard so much about this place from Krista and was sooo excited to experience it for myself. 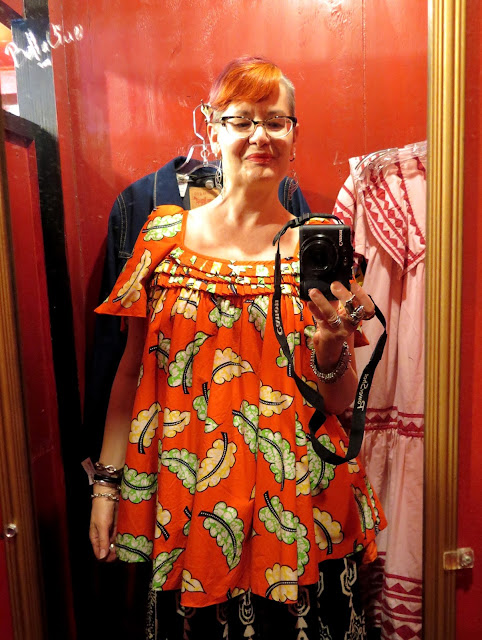 There was no photography allowed in the store, but I did snap this photo in the change room while trying on this heavy cotton blouse.  I loved the pattern and the pin-tucking at neckline, but it was just a bit too voluminous.   Not to fear - there was a whole store full of fabulous stuff to choose from!  The stock was an awe-inspiring mix of contemporary, vintage, designer, and ethnic, and the prices were extremely reasonable.  I felt like I had died and gone to secondhand-shopping heaven.  I made two trips to the change room, loaded down with things to try, and we spent 2 1/2 blissful hours there. 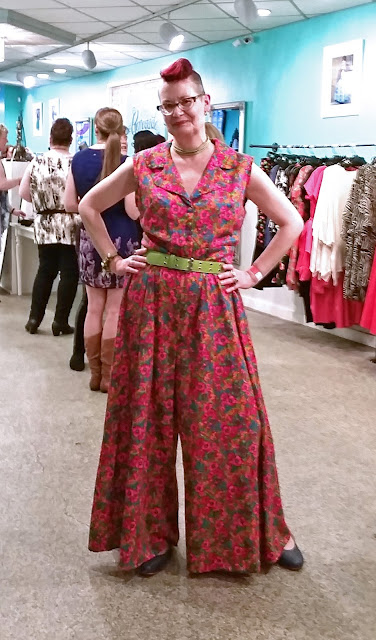 I purchased six items, my favourite being this vintage palazzo pant jumpsuit.  I've worn it to a party (where this photo was taken) and I wore it to work, and it was a big hit both places. Best $20 I've ever spent. 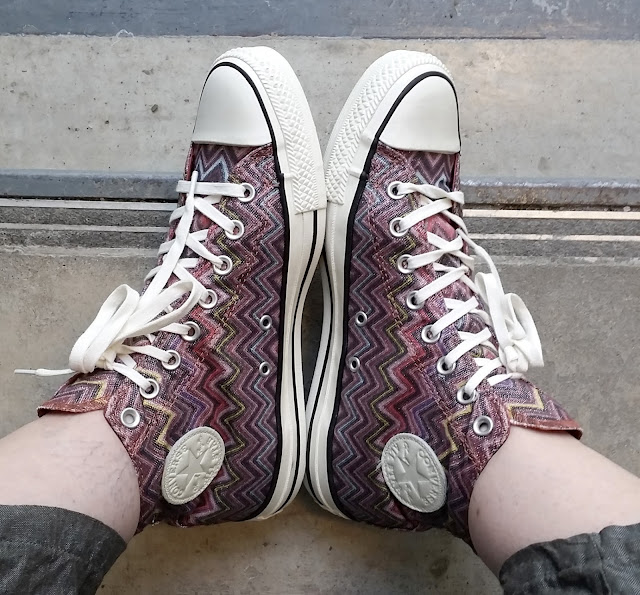 I scored these Missoni-collaboration Converse at the Nordstrom Rack in Krista's neighbourhood.  I also picked up a pair of fancy knickers and a cute flowered pencil skirt from Naked City Clothing, a fun shop full of punk, goth, rockabilly, and pinup-inspired clothing.  The verdict -  New York may have the glamour and high fashion, but Portland has lots of places to find affordable, unique, new and used clothing.
Whew, that was a lot of photos!  Hope you enjoyed these Portland posts - if you ever get a chance to visit, I would encourage you to go.  If a  Portland Tourism website offered to pay me to visit again and write about it, I'm 100% on board with that...﻿
Posted by Forest City Fashionista at 9:59 AM