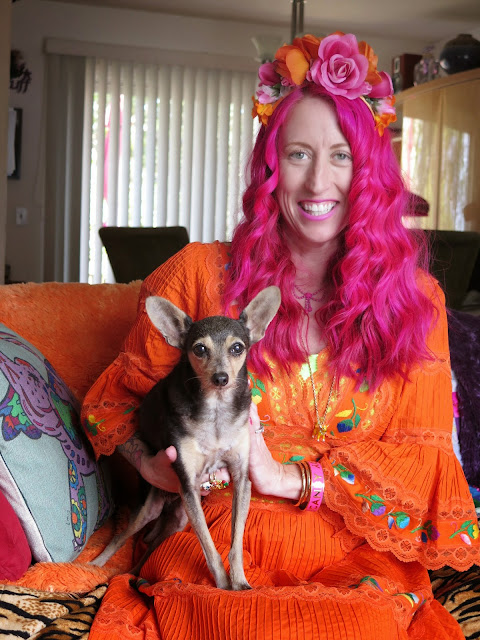 This bright and beautiful woman is Krista, and her handsome boy Peetee.  I "met" Krista through her blog Peetee's Palace (which she stopped updating in December) and after an exchange of comments on each other's blogs, emails, and Skype chats, she extended an invitation to visit her in Portland, Oregon.  I had heard great things about the west coast city so I jumped at the chance to see it for myself, and meet the colourful, creative, and all-round cool gal in person. 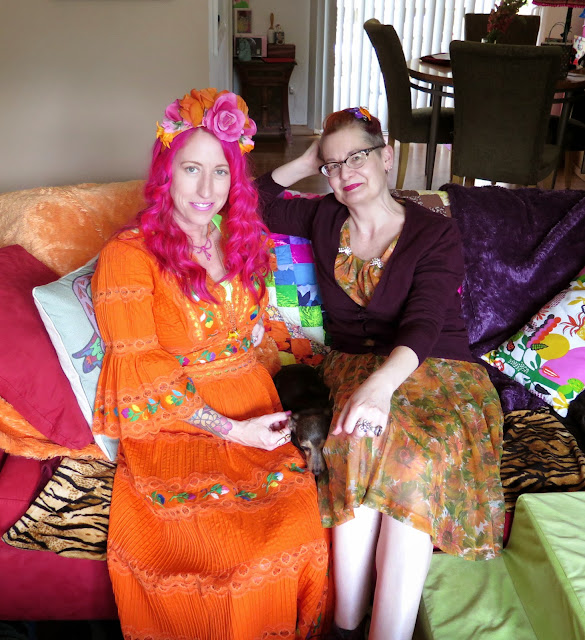 After a drive to Detroit and a 4 and a half hour flight, I arrived at Casa Krista and Chris (her husband).  Here we are the next day on her couch with Peetee snuggled between us, making plans for the day.  Krista is wearing a gorgeous Mexican wedding dress that she found at her (and now mine) favourite secondhand store. Isn't modern technology wonderful? 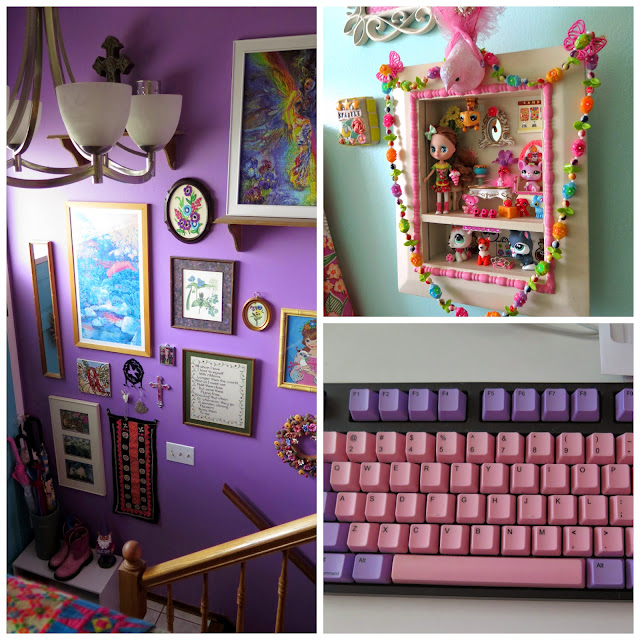 Krista's home reflects her love of cheerful colours and all things cute and creepy.  Skulls, fairies, and dolls share space with colourful textiles, Mexican handicrafts and lots of art.  Several of the fun dioramas Krista has made are displayed throughout the house, including the bathroom, and even the keyboard in her office is a perfect reflection of her. 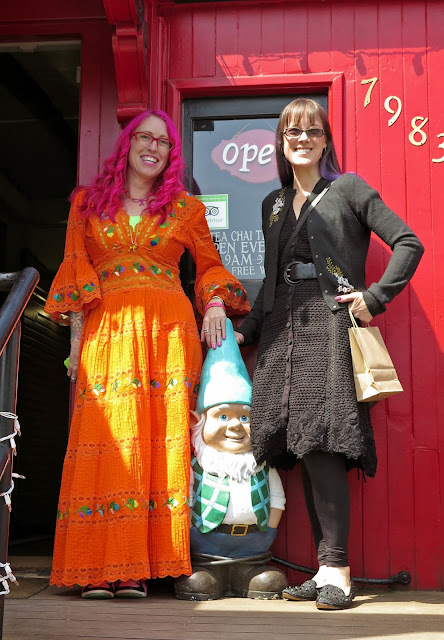 On Day One of our adventure we were joined by Krista's bestie, Cristi (it was a challenge spending three days with a Krista, Chris, and Cristi and not get names mixed up). 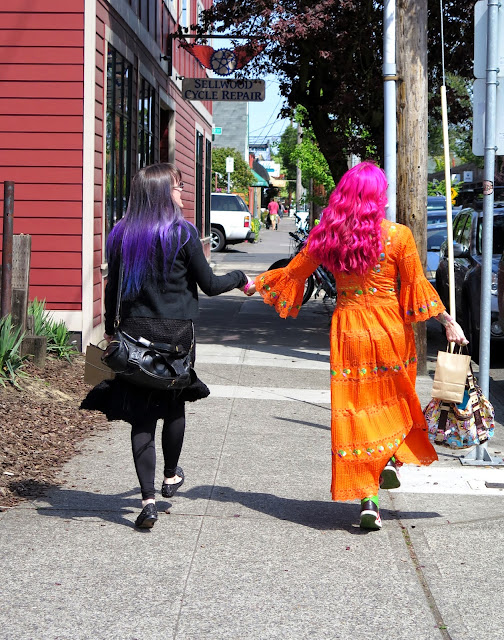 It was a treat to spend the day with these two fun-loving dames, and I couldn't resist grabbing a quick shot as they skipped off down the sidwalk ahead of me.

After a scrumptious lunch of Vietnamese and Thai food at Jade Bistro  (I would soon learn that delicious food is abundant and inexpensive in Portland) we went to visit Portland's famous International Rose Test Garden in Washington Park , hoping for some good photo opportunities. 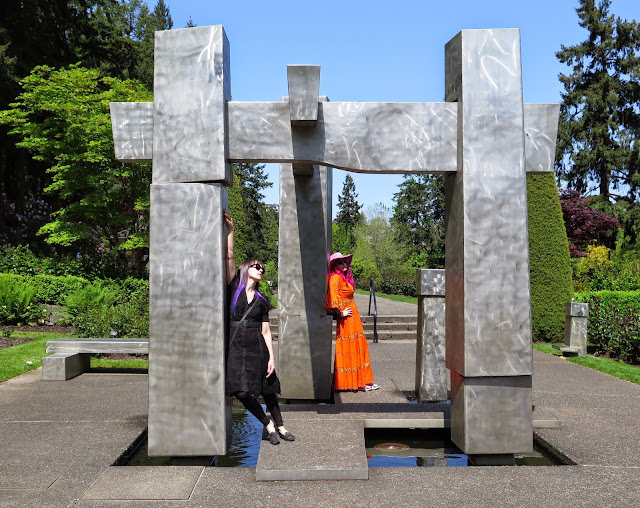 The Frank Beach Memorial Fountain, designed and built by Oregon artist Lee Kelly, made a great backdrop for a faux fashion shoot.  Beach is credited for having christened Portland "The City of Roses". 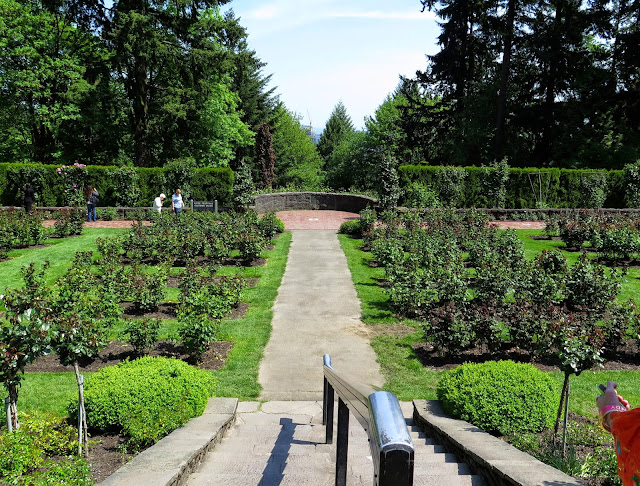 Unfortunately, we were too early in the season, and the roses weren't blooming yet, but you can imagine how beautiful it looks when it's bursting with blossoms. 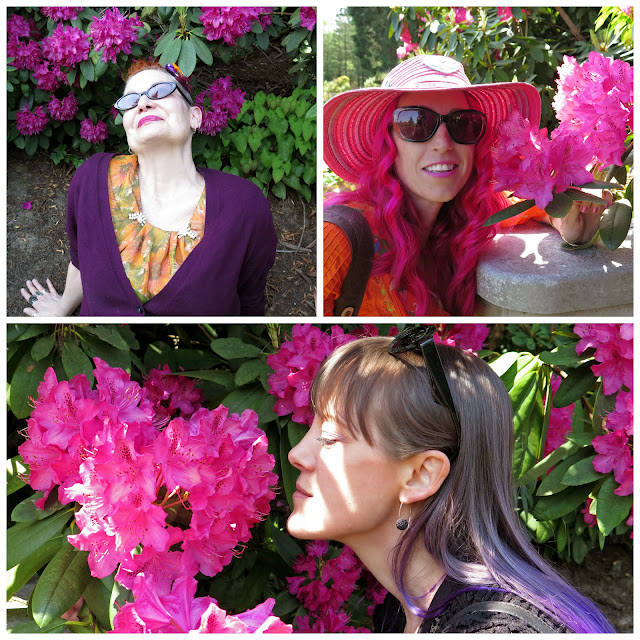 The Rhodedendrons were in bloom and we each posed for a photo with the vibrant flowers.  I've never seen Rhodedendrons here in Ontario, but they were all over Portland in a variety of colours. 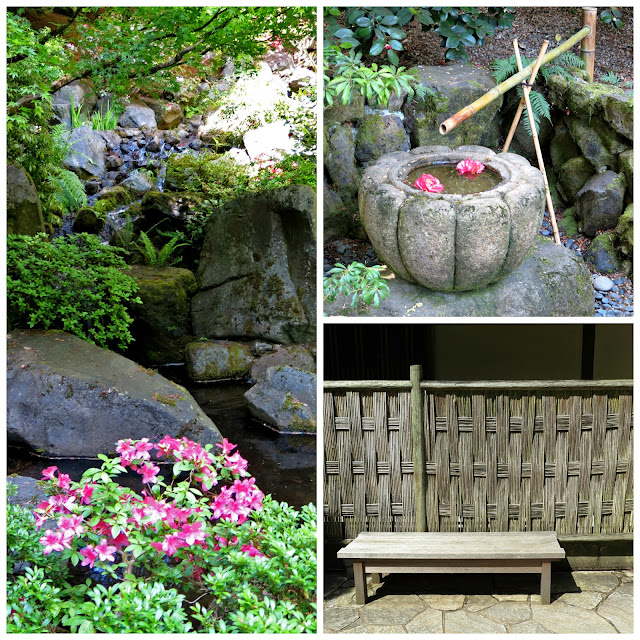 From there we walked across the road to the Portland Japanese Garden.  I know absolutely nothing about Japanese Gardens, but had read that the one in Portland was considered to be one of the highest quality, and most authentic Japanese gardens outside of Japan.  The garden, designed by Professor Takuma Tono was opened in 1967, and consists of five smaller gardens, each reflecting a distinct garden style.   Being used to Canadian gardens, I was surprised there were very few flowers, or colours aside from green, in the garden. 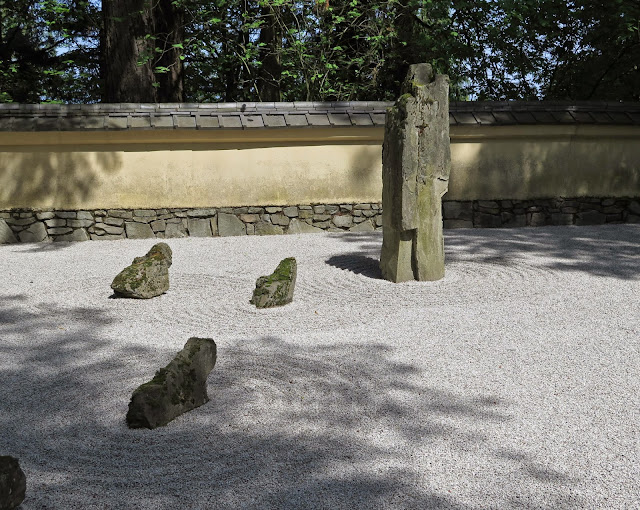 Stone, water and plants are the three main elements of a traditional Japanese Garden.  Gardens of raked gravel and stone are called karesansui ("dry landscape gardens").  These gardens demonstrate the Japanese aesthetic principle of yohaku-no-bi, "the beauty of blank space". 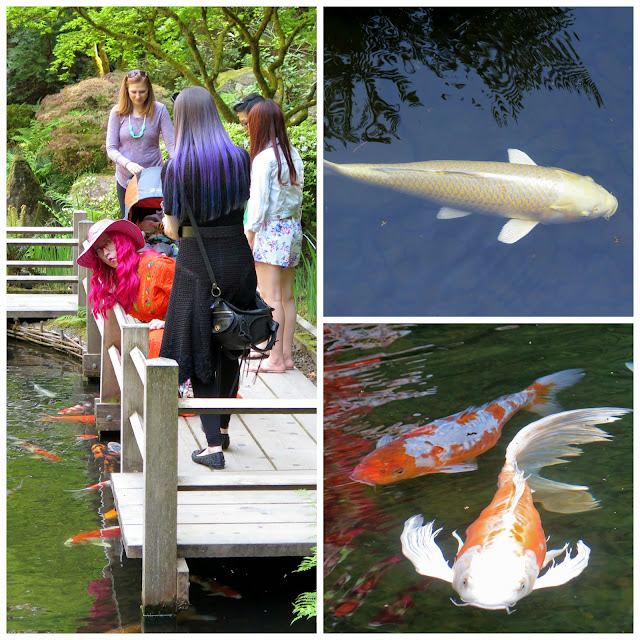 My favourite part of the Japanese garden was the Koi pond.  The Koi were obviously very well-fed as they were the largest one's I've ever seen.  On the left, Cristi is documenting Krista's best fish face. 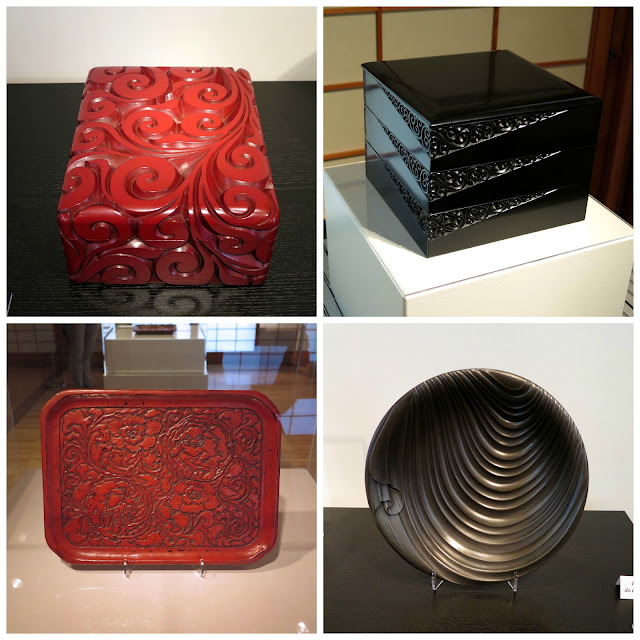 As part of the regular "Art in the Garden" series, there was an exhibit of beautiful carved and lacquered wood in a small pagoda.  Sisters Keiko and Naoto Goto brought works created by four generations of their family to Portland for the exhibit.   As you can tell by the photos above, I was drawn to Keiko Goto's modern aesthetic more than the elaborate designs of her ancestors.
Clockwise from top left:  Keiko Goto - Arabesque Series Stationery Box, 1995; Keiko Goto - Black lacquered, three-layer food container,  2005 ; Keiko Goto - Drapery Series: Bowl, 2014 ; Itsuki Goto - Tray with lion and peony design, circa 1890

Our nature and culture-filled day finished with a trip to the Portland Art Museum to see the exhibit Italian Style - Fashion Since 1945 .  It was the last weekend of the exhibit, and I was so happy to be able to see it as it was chock full of gorgeous, glamorous clothing, and is the subject of my next blog post.
Posted by Forest City Fashionista at 9:07 PM