From One Visible Woman to Another

At least half of the items in my closet were purchased secondhand from thrift and vintage stores.  They had a life before they came to me, and in the case of some of the more unusual pieces, I am always curious about the previous owner - who was she?  Where did she wear this?  Did she love it?  Unfortunately, in most cases, I'll never know who used to own the items I now enjoy wearing.

A few weeks ago a friend emailed me a link to an online "Vintage Couture" auction run by Gardner Galleries, our local auction house.   The auction featured clothing and accessories that belonged to Rachel Heyndrickx, who died in November, 2014 at the age of 93.   Gardner's generally deals in furniture, household items and art so it was unusual for them to hold an auction specifically devoted to items in someone's wardrobe.   I looked at the photos of the items up for bid on the website and was intrigued enough to attend the auction preview with a friend in order to see the items in person.

I'm not a fan of bidding against other people for items I want and avoid Ebay for that reason, unless an item has a "Buy It Now" option.   I have attended a couple of live auctions but would get very upset when other people bid on items I really wanted, especially when they were dealers.  I couldn't wrap my head around the unfairness that whoever had the most money won.  Once I saw the beautiful items that had belonged to Miss Heyndrickx, I decided to dip my toe in the auction waters again. 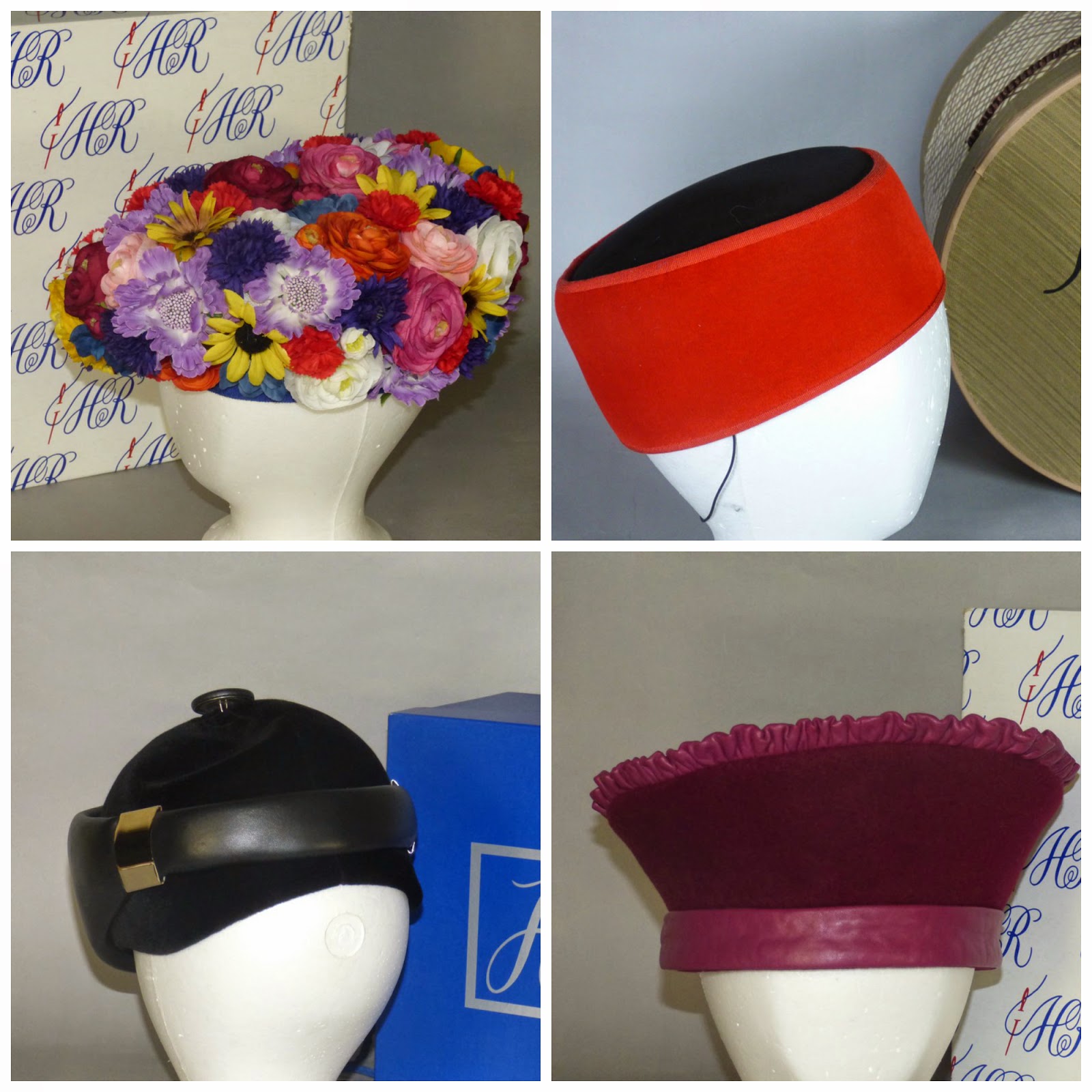 The first thing I had noticed about the auction was Heyndrickx's  impressive and eclectic hat collection, all with their original hat boxes.  Clockwise from top left:  floral beauty by Kokin New York, Valentino pillbox, magenta leather and felt hat from De Lora New York,  leather and velvet Otto Lucas

According to her obituary, Rachel Heyndrickx's family was in the tobacco business, and she was the Office Manager at Imperial Tobacco.  She was a world traveler who loved her garden, never married and had no children. What the obituary didn't say, but was obvious to me, was that she loved her clothes, and dressing up.  This was confirmed by one of Heyndrickx's nieces who attended the preview, who told me  her aunt travelled to Toronto and Montreal frequently to shop.  Many of the items in the auction were from Holt Renfrew, Creeds and Saks Fifth Avenue.  She also had a good dressmaker as evidenced by the many custom made outfits in her closet.    The niece's husband mentioned that Heyndrickx's home was like a museum, and that she would buy hats that didn't necessarily get worn, but because they were beautiful or interesting and she liked to look at them. 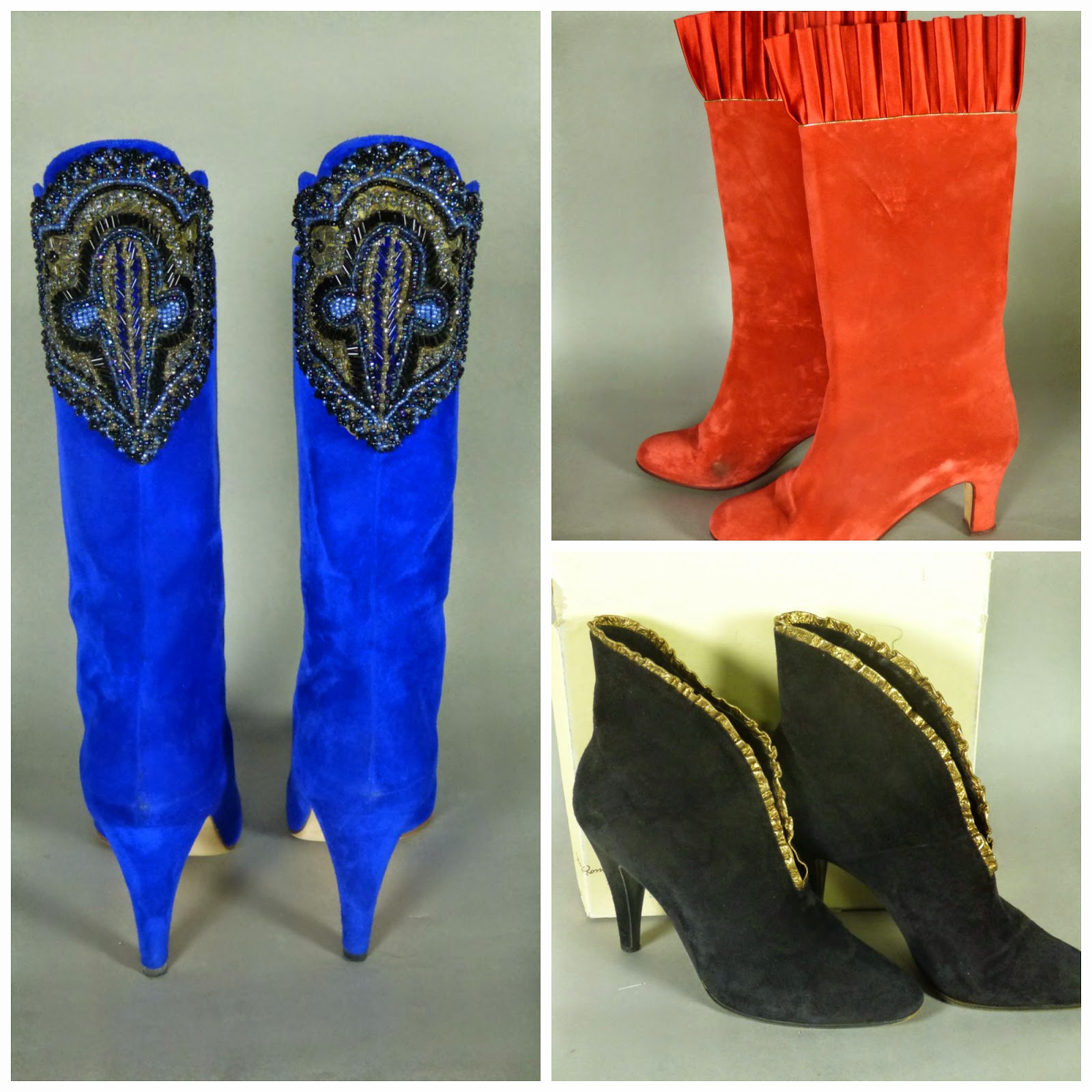 photos from Gardner Galleries website
Speaking of beautiful things, above are three pairs of Heyndrickx' suede boots, all with lavish embellishments

It was obvious that Heyndrickx had very good taste - the clothing in the auction was simple and elegant in shape, and made of luxurious fabrics - silk, wool, silk velvet, fur and leather.  She loved hats - not just simple, tasteful hats but wild, extravagant ones as well and she was obviously not afraid to stand out in a crowd.  Her clothing and accessories had been carefully stored and cared for, as they were all in excellent condition. 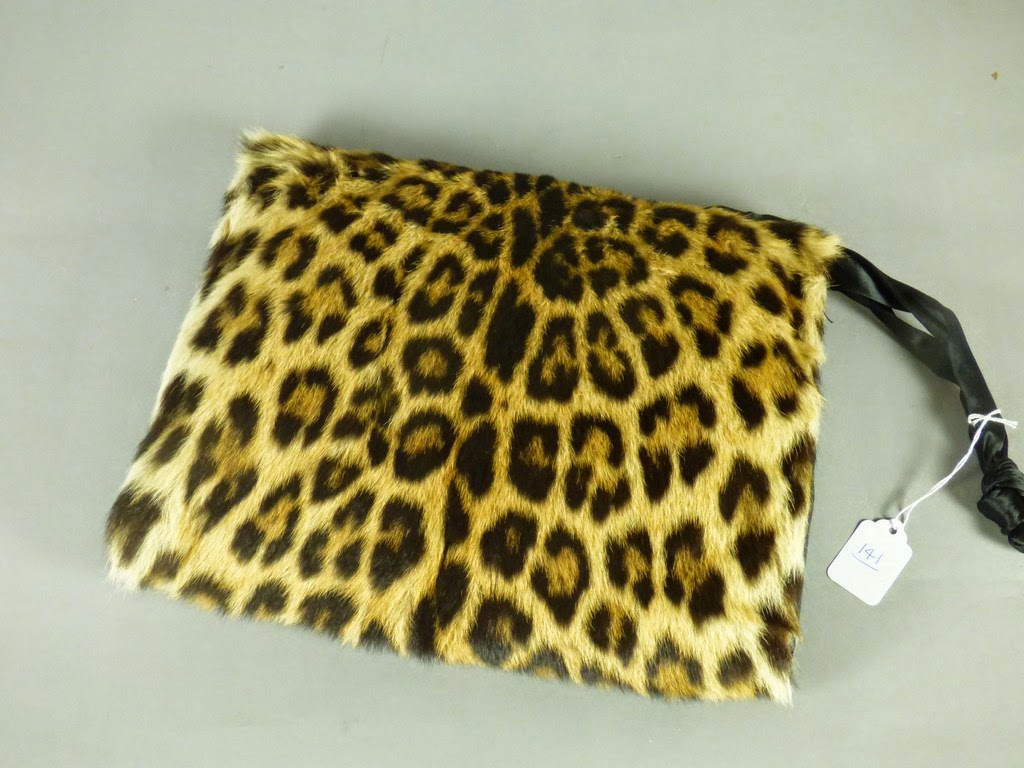 Heyndrickx particularly loved fur, as she had at least 6 high quality designer fur coats, many with matching hats. This leopard fur muff matched her mink-trimmed leopard fur coat.  The furs drew a large number of bids. 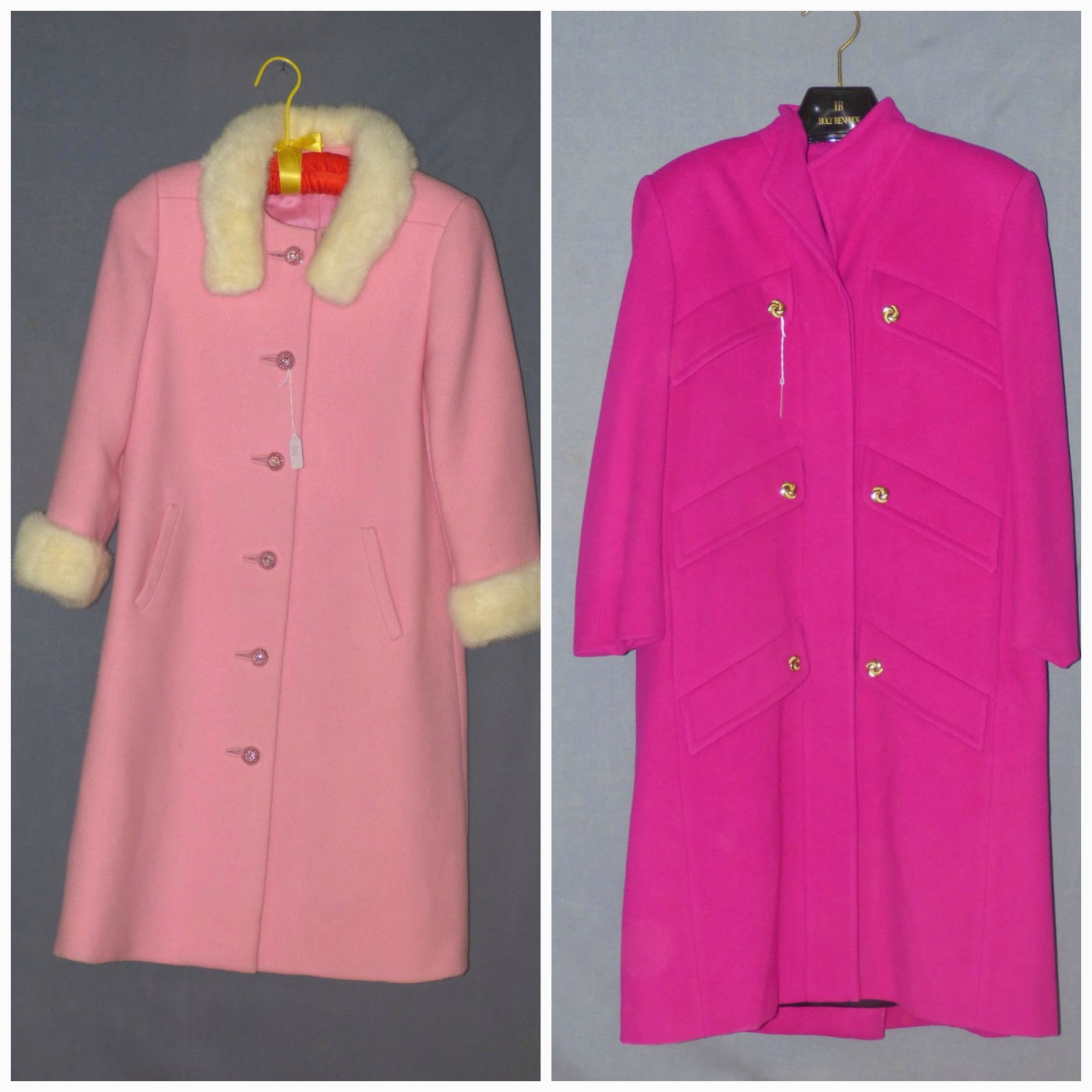 If the clothing in the auction was any indication, Heyndrickx loved colour; of the many coats in the auction, five were in various shades of pink. 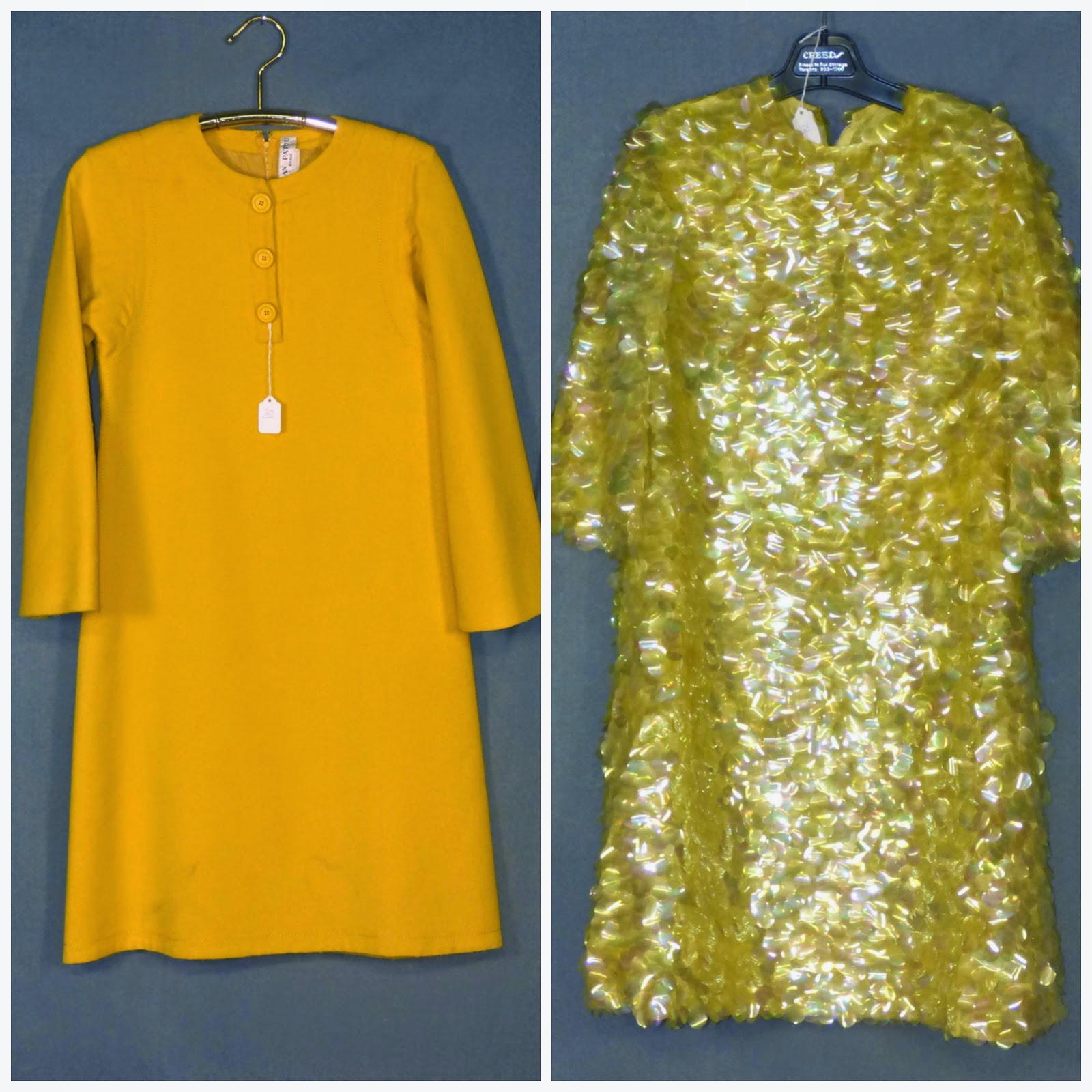 Yellow seemed to be a favourite as well.  The dress on the left is by Jean Patou, and the paillette-covered dress on the right (described on the auction site as a "wild 60's dress) appeared to be handmade.  Heyndrickx's wore the dress on the right to her niece's wedding, which confirmed the feeling I had that tea and a conversation with Miss Heyndrickx would be very entertaining. 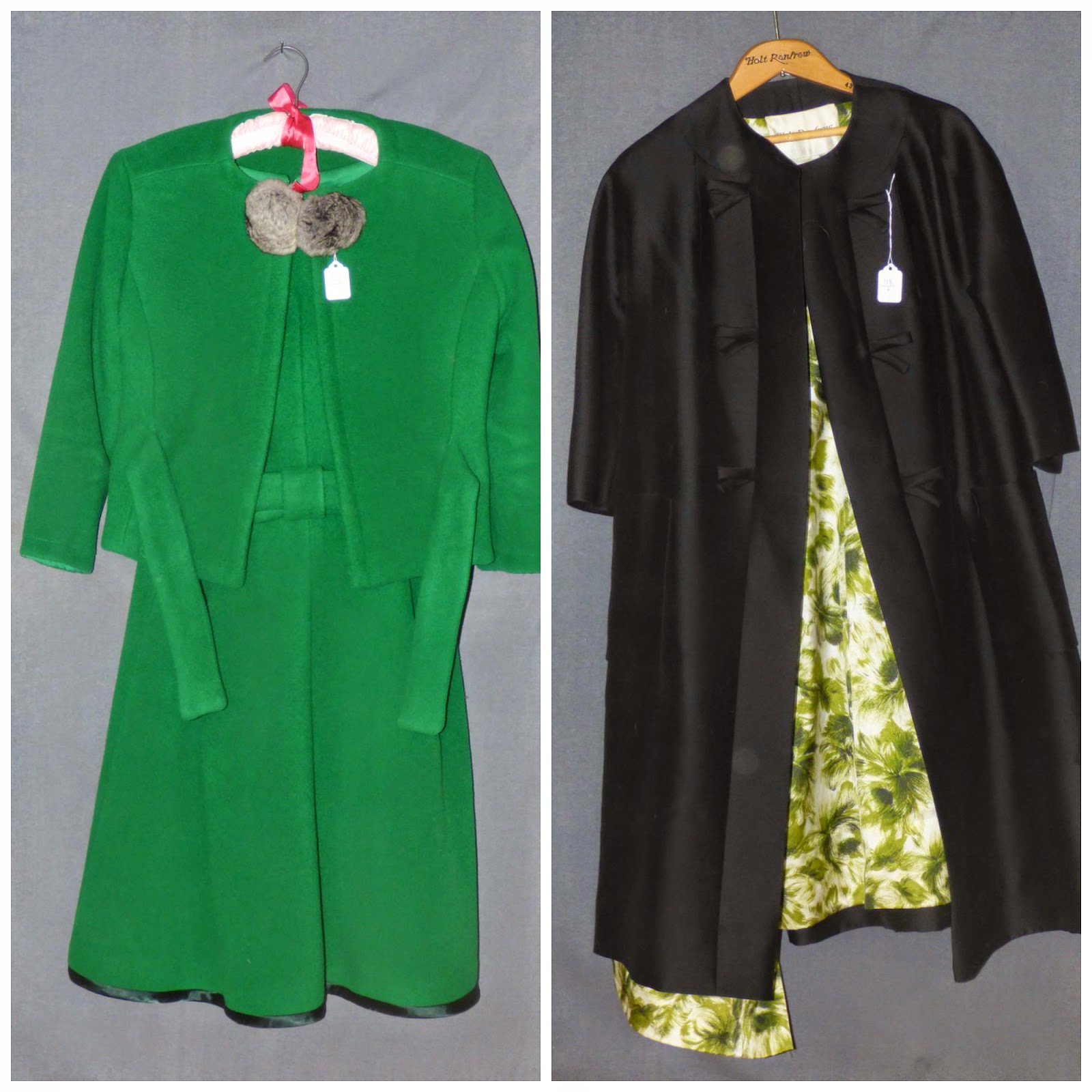 If I had to define Heyndrickx' style in a word, I would say she was very much a "lady" in the way she dressed.   Of the items in the auction, many were elegant dresses with matching jackets or coats.  Left:  1960's wool suit with chinchilla pompoms with the label "Ducharme, the World's Finest Fabrics, Paris" Right: silk dress and coat with matching lining from Holt Renfrew. 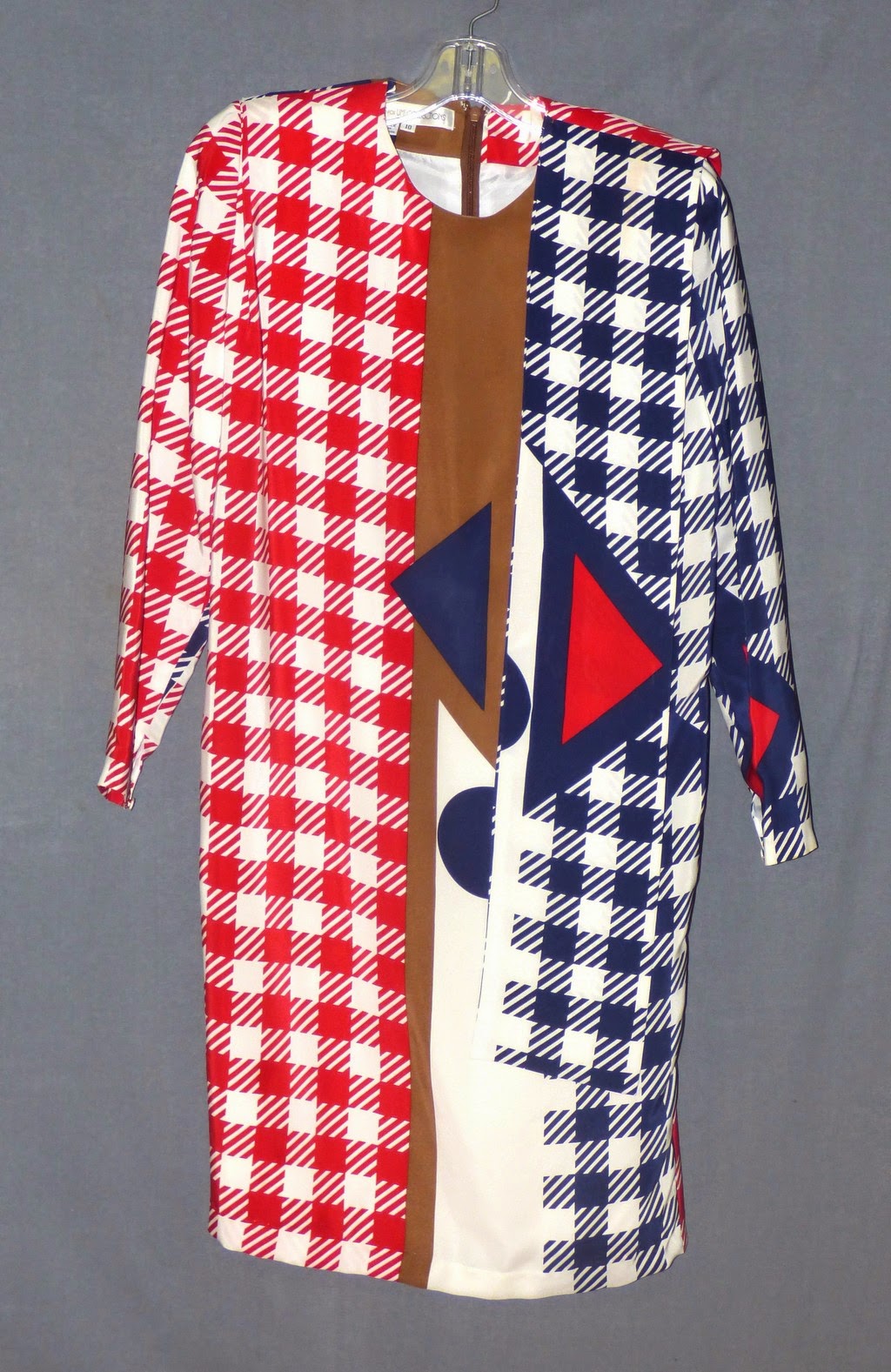 ﻿
photo from Gardner Galleries website﻿
I considered bidding on this silk dress, which I think sold for $10 or $15, just because of the cool colour/pattern mixing.﻿ 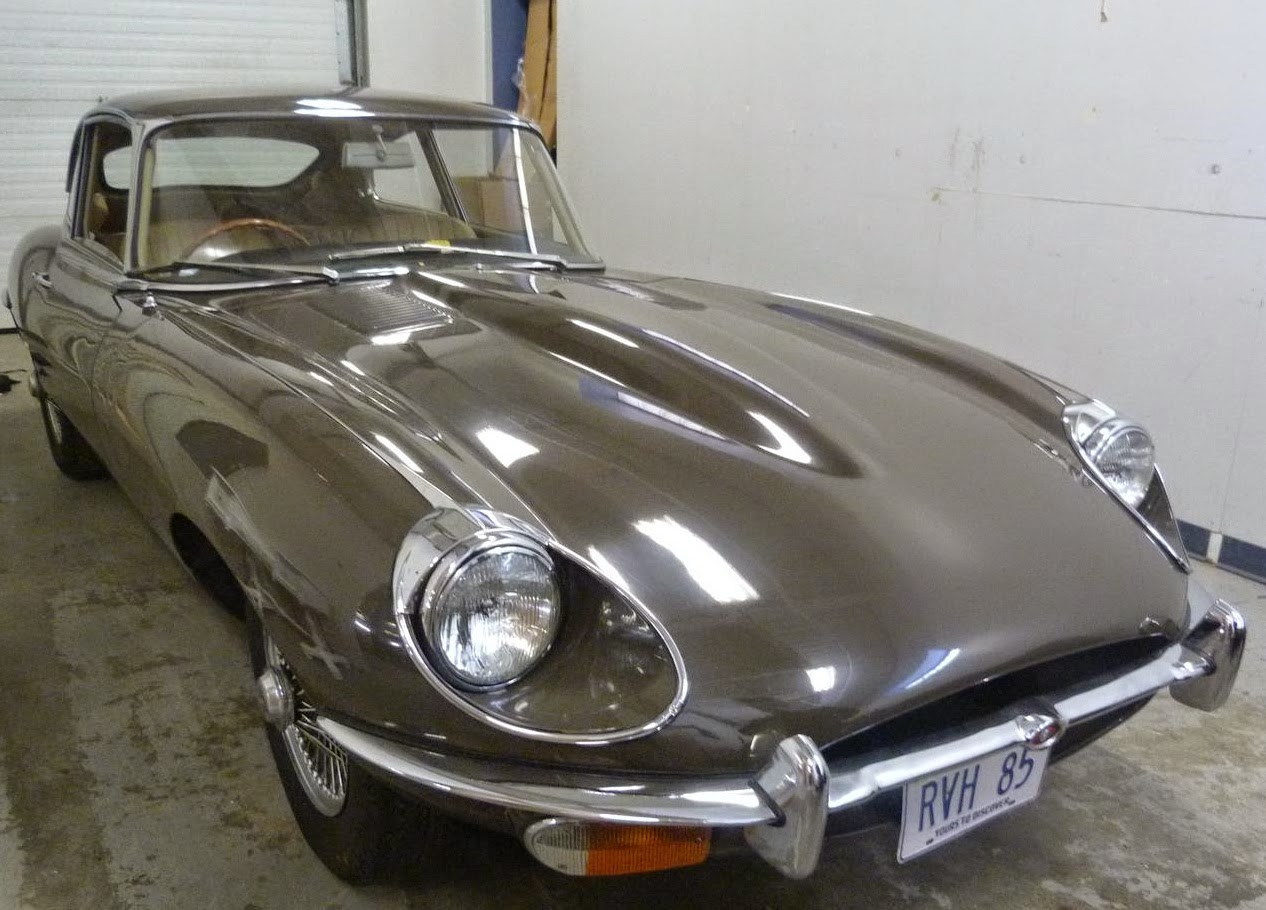 If any further proof was needed of Miss Heyndrickx' love of beautiful things, here is a photo of her 1970 Jaguar, kept in pristine condition and only driven in fine weather.  It sold for over $100,000. 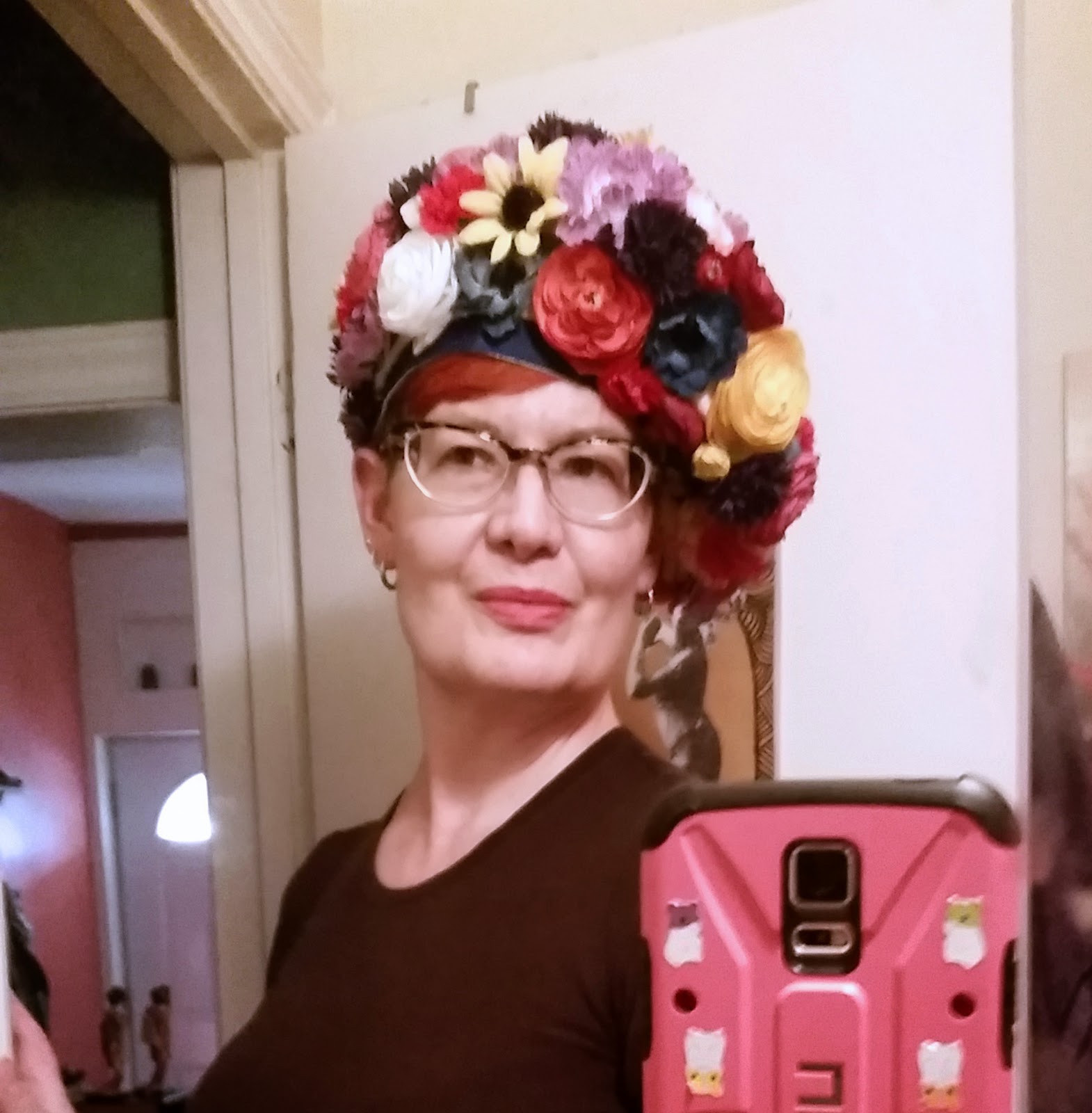 I tried on most of the hats at the preview and loved a great many of them, but the bids on most went higher than I was prepared to pay for yet another hat (even though they were still very reasonably priced).   I made a last minute decision to bid on the flower-covered Kokin which was so over the top that it was more art than hat.  When I was looking at the hats, I thought it would have been wonderful to have seen photos of her wearing them.   The irony was that during the preview, a friend discovered a pile of photos of Heyndrickx, wearing some of the clothing in the auction, in a drawer of a dressing table that was part of the auction of her furniture that was happening the next day.  When we looked for the photos the next day, sadly, they were gone. They would have been a marvelous addition to the display of her clothing and accessories and would have fostered a connection between the buyers and the former owner. 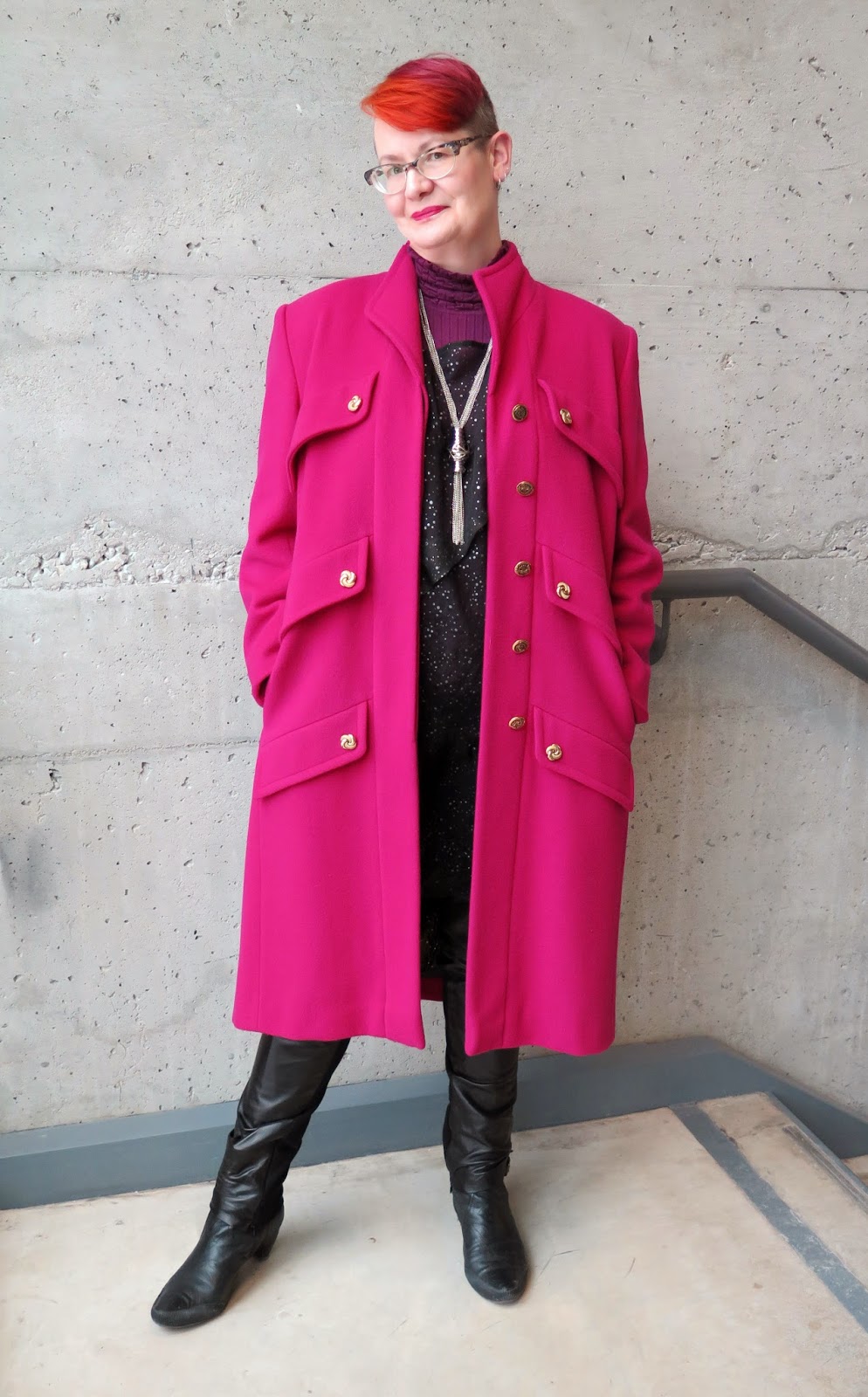 In addition to the "Garden for your Head" (my description, not the designer's), I won two coats, the 1980's one I'm wearing in the photo above, and a teal and black leather one which needs a button replaced.   I thought I'd have to put them away until next winter, but with the cold temperatures and intermittent snow we've had this week, I was able to wear the pink one to work.  It was made in Canada, something you rarely see these days, and I was warm, and very visible.  I thought of Rachel Heyndrickx while wearing it, and hoped that she would have enjoyed seeing her clothing have another life with someone who appreciated her style, her love of dressing up, and her independent spirit.   Here's to you, Rachel Heyndrickx, from one very visible woman to another - I wish I would have had an opportunity to meet you.
Posted by Forest City Fashionista at 1:34 PM