Colour, Texture and Line - Works by Jim Telfer at the Westland Gallery

It always seems to be a "feast or famine" situation on weekends here when it comes to arts and culture events.  This past weekend offered a feast of visual art at exhibits that opened at galleries around the downtown area.    On Friday night, the Westland Gallery hosted an opening party for an exhibit of paintings and batik-influenced watercolours by Jim Telfer.  You may remember Jim as the man in the plaid from this post. 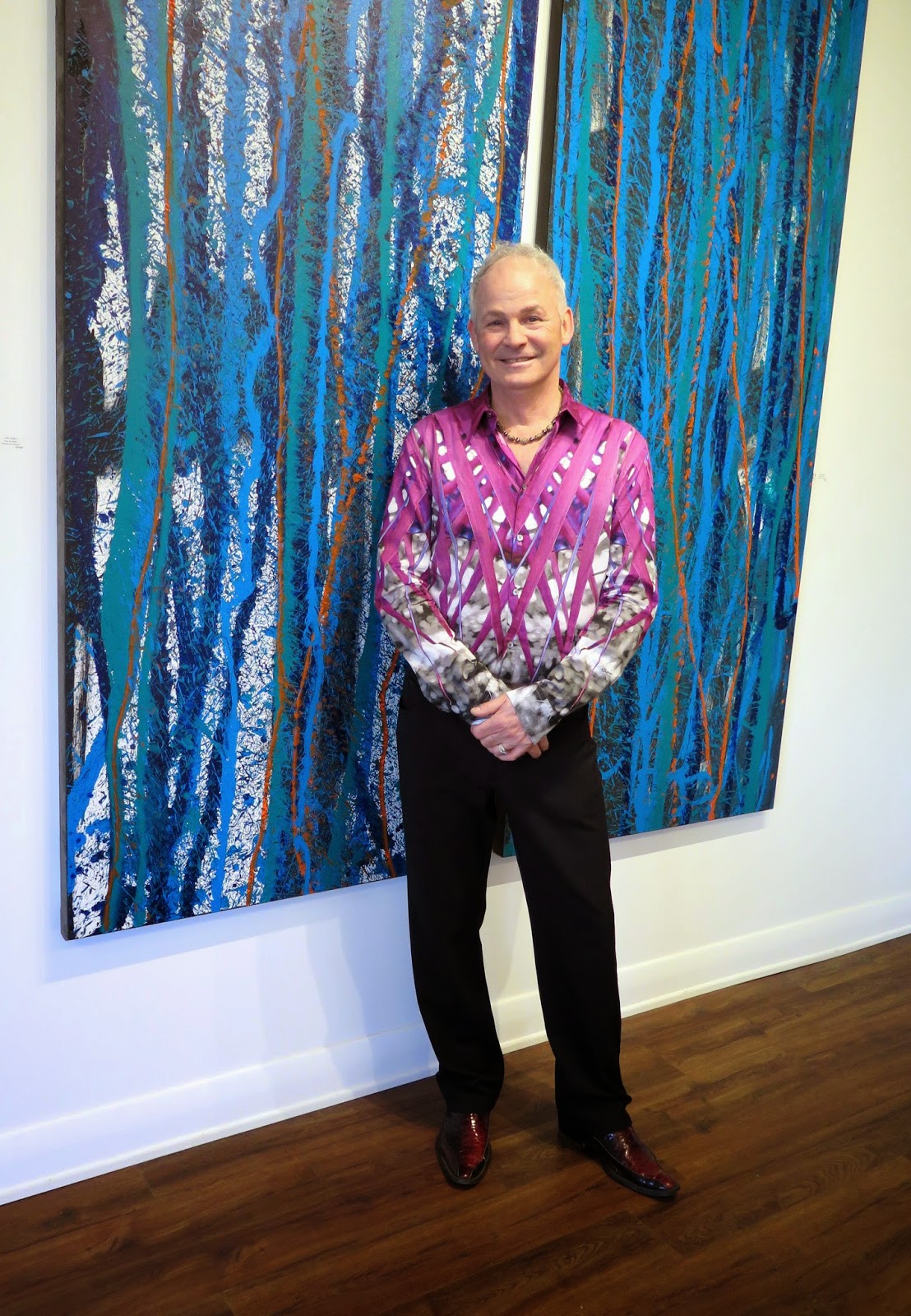 Here's Telfer in front of one of his paintings - a diptych titled "Day and Night".  A number of his paintings feature strong vertical lines representing trees and reeds, and he chose the perfect shirt to go with the art. 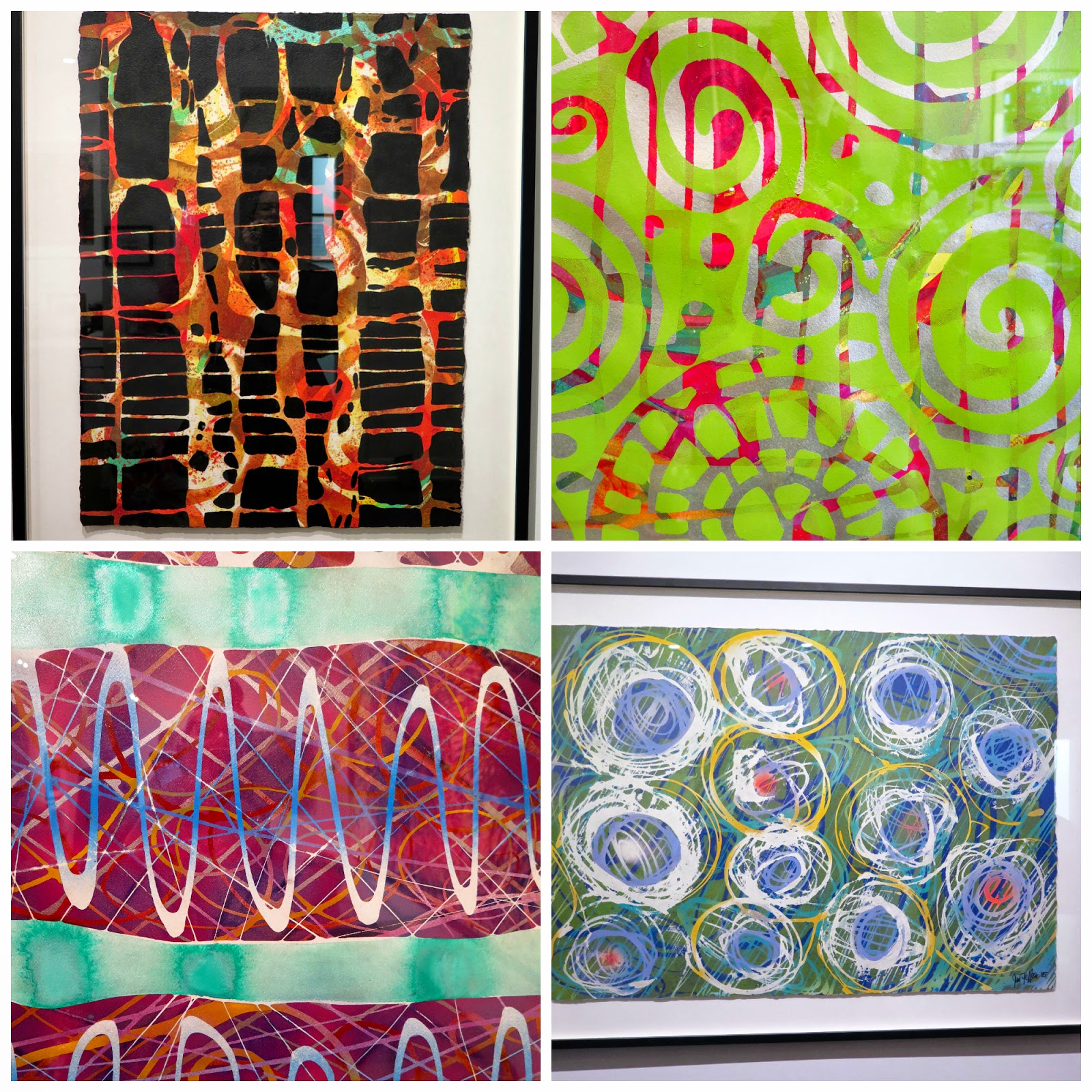 Telfer's latest work is influenced by batik technique of applying wax to fabric before dyeing it to create patterns.  Telfer applies a mix of latex rubber to the paper instead of wax and the process is extremely time-consuming as layer after layer is added to achieve the desired effect.  Jim is an avid traveler and his subject matter is taken from nature in various parts of the world.  Clockwise from top left:  "Everglade", detail of "Chicheniztza", "Stuff in Space" and detail of "Dirty Water" 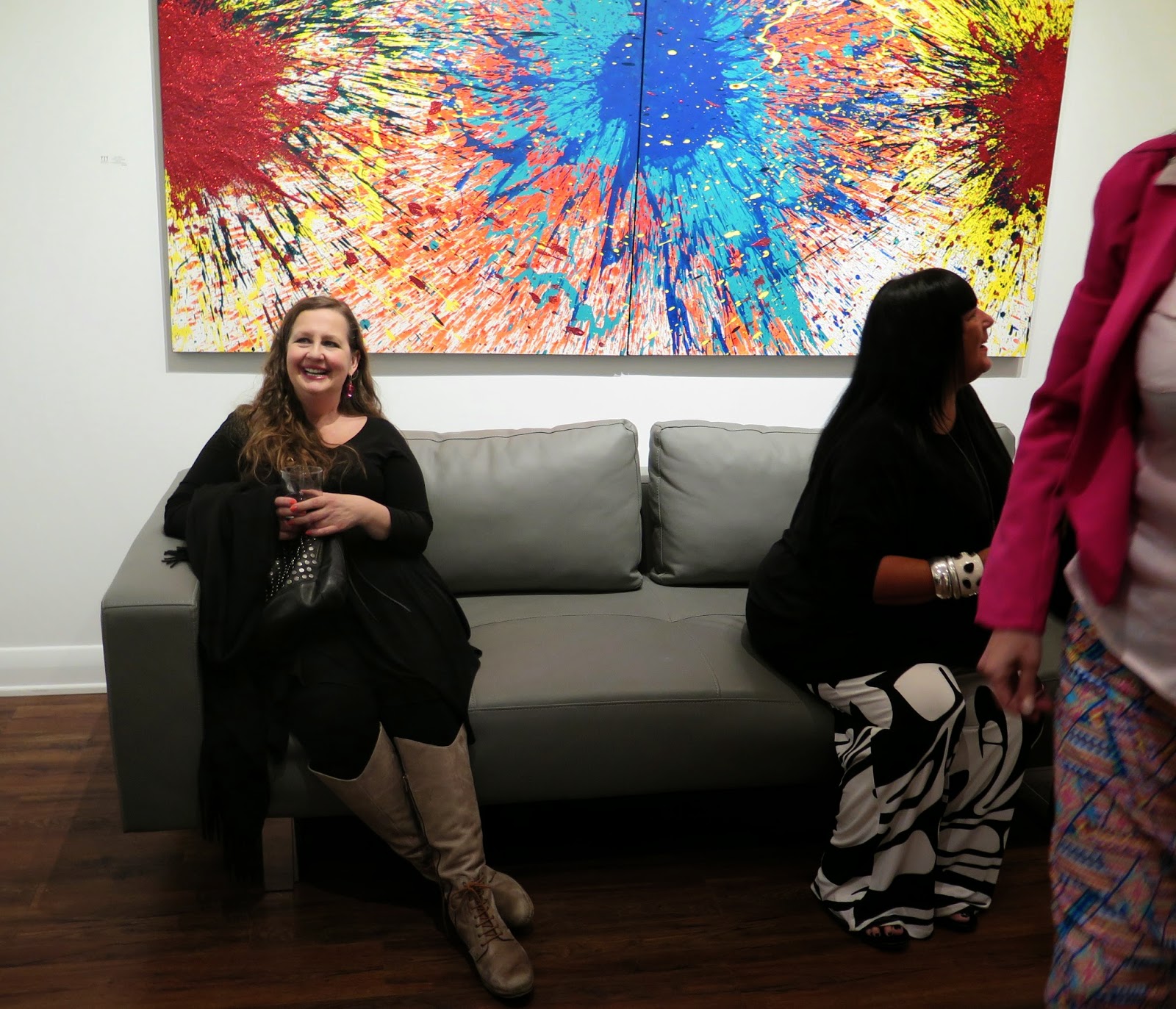 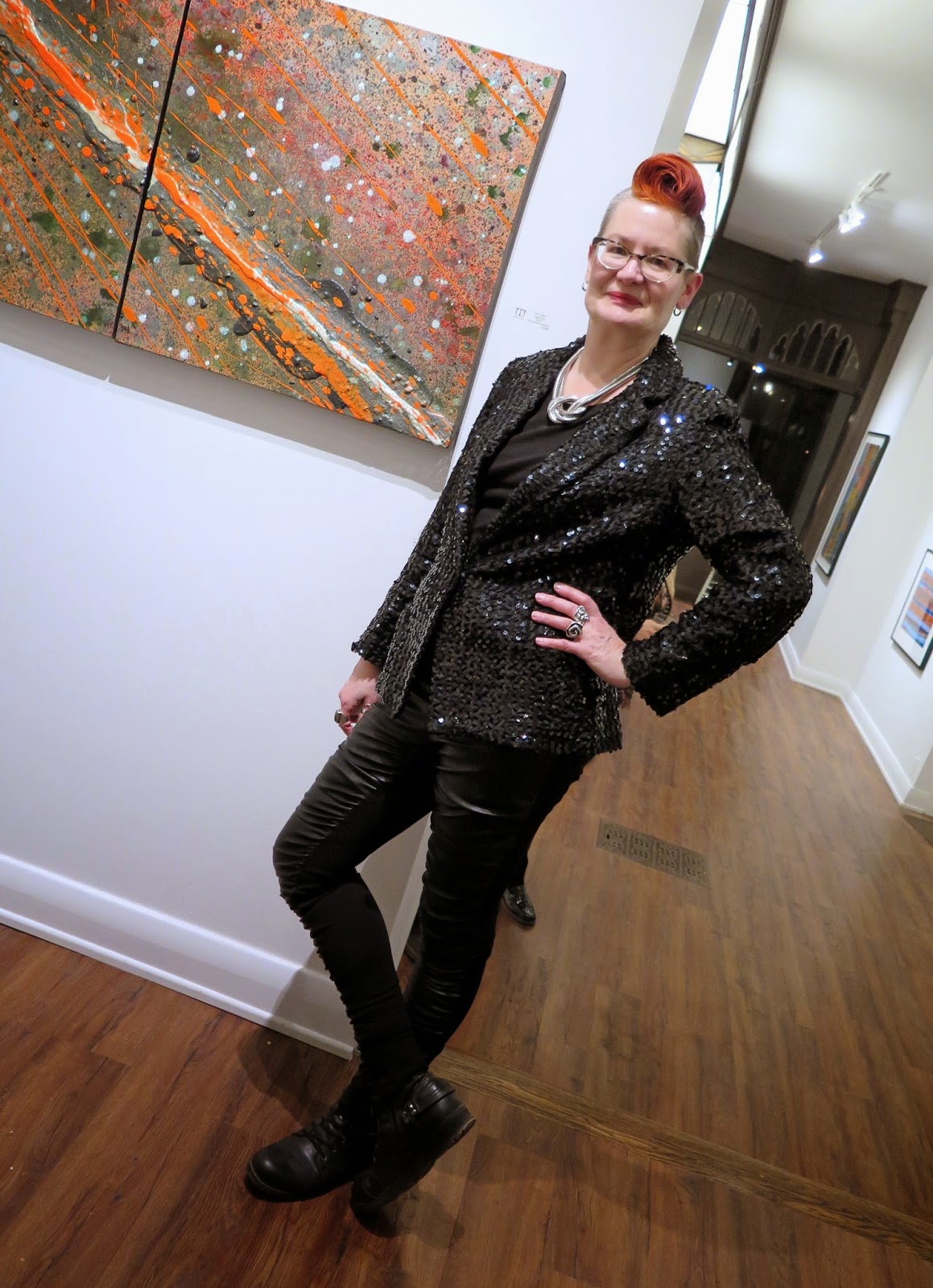 I asked Natalie to take a photo of me next to the painting titled "Sagittarius" because I am one.  In addition to their bold colours, some of Telfer's paintings are heavily textured, which adds to their visual appeal.  It was an all-black night for me, although I did have some interesting textures going on. 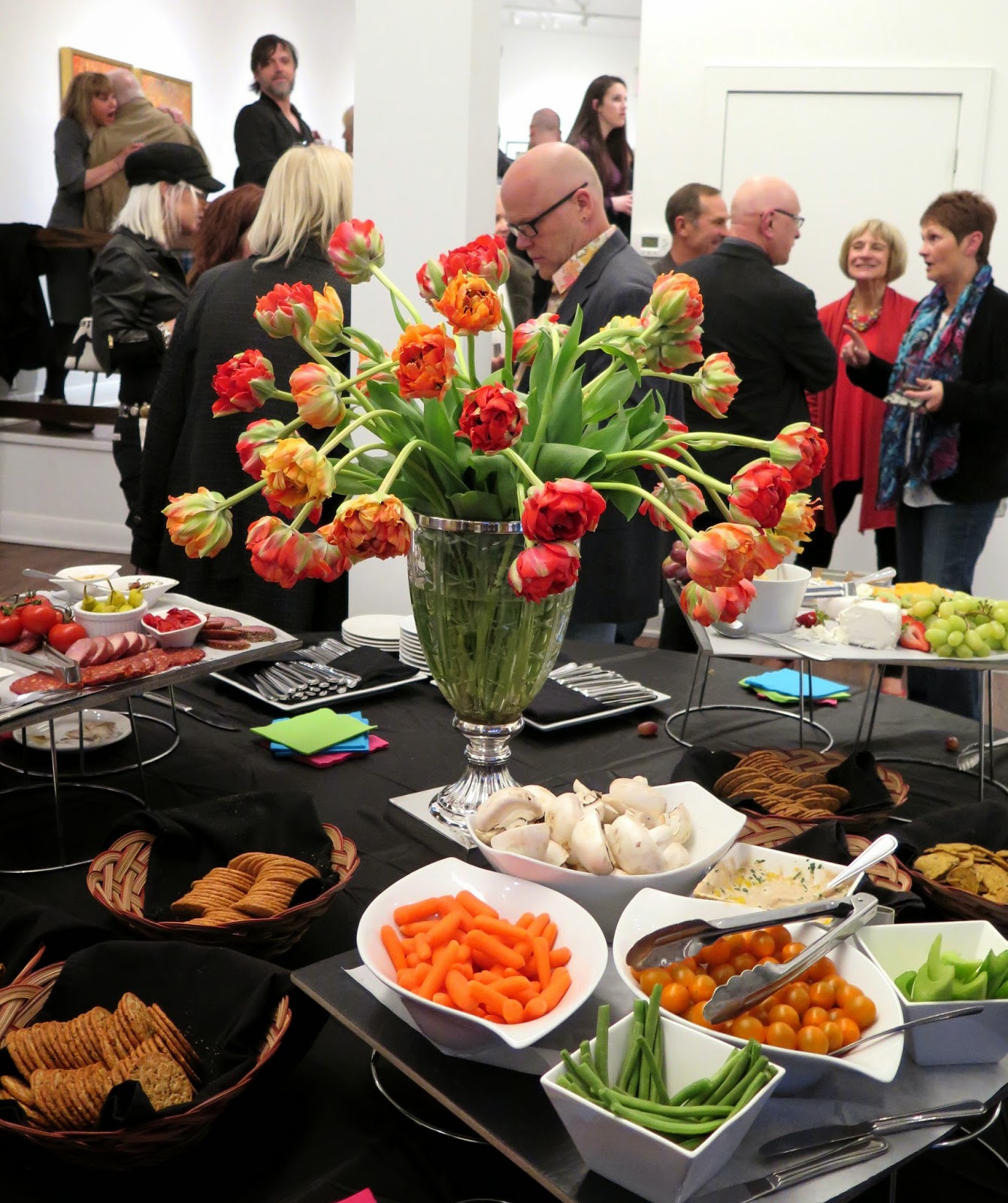 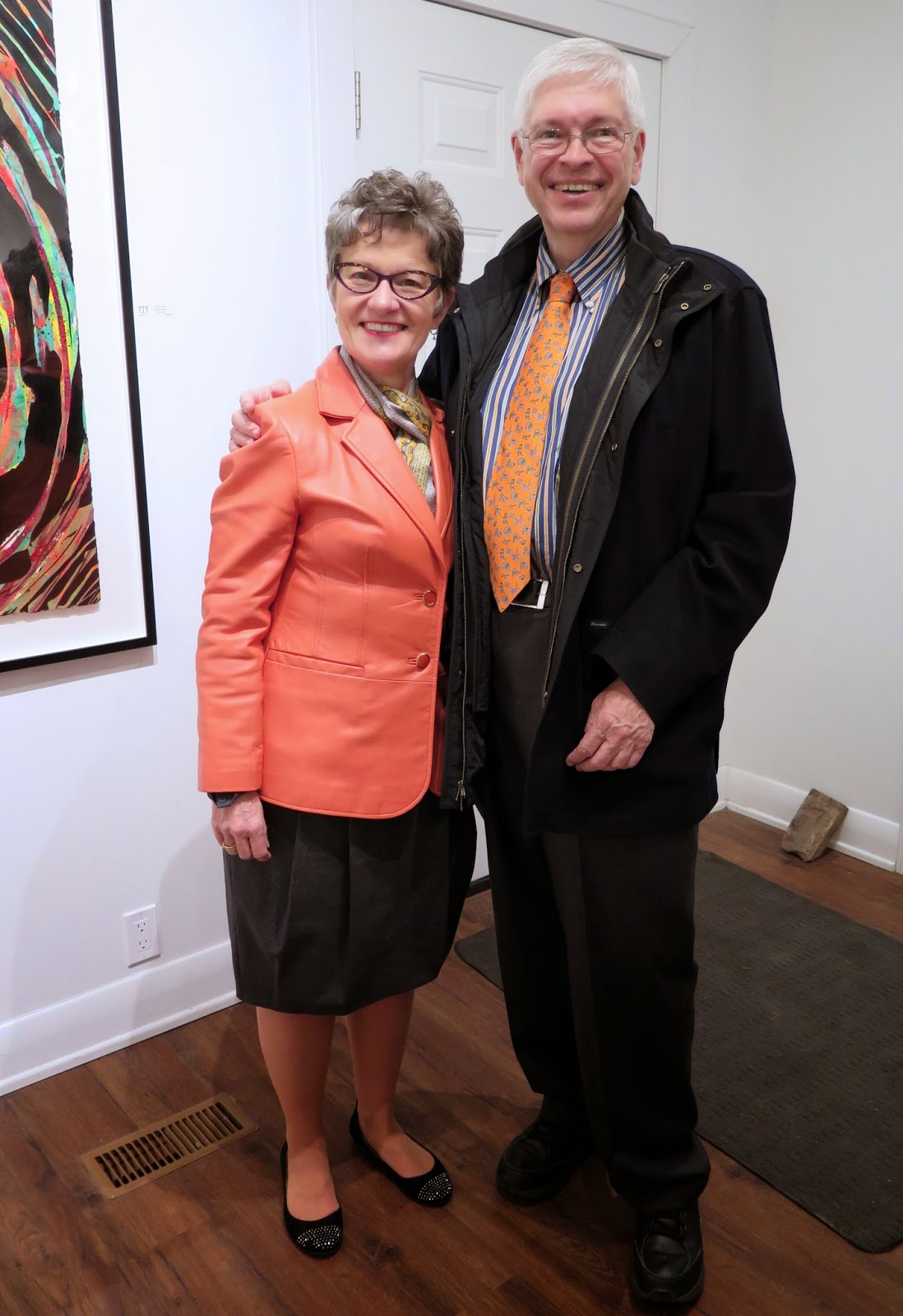 Telfer has a great eye for colour, in his art, and in his clothing, and his exhibit drew a very stylish crowd for the opening.  I complimented this couple, who are both medical doctors, on their splash of orange. 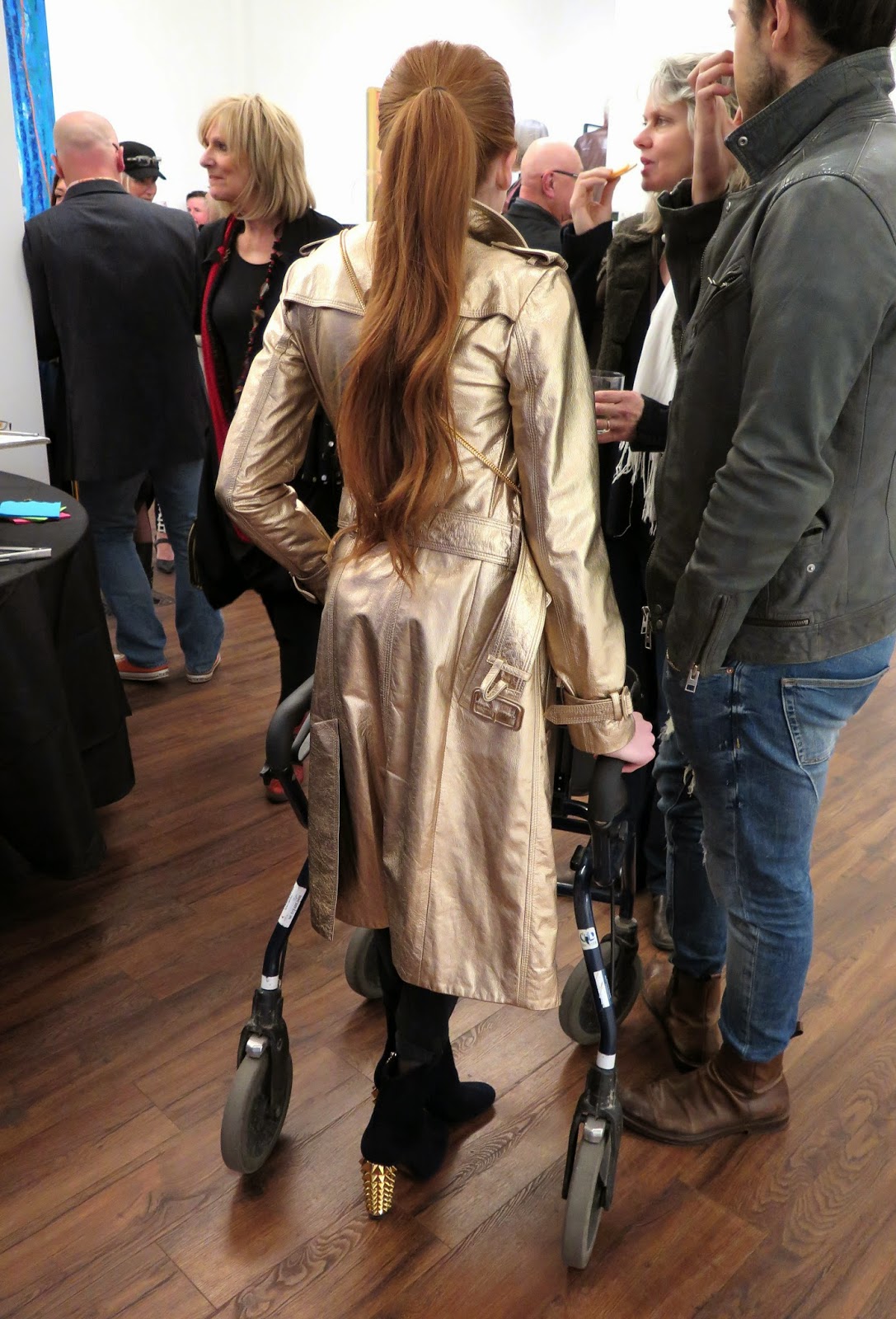 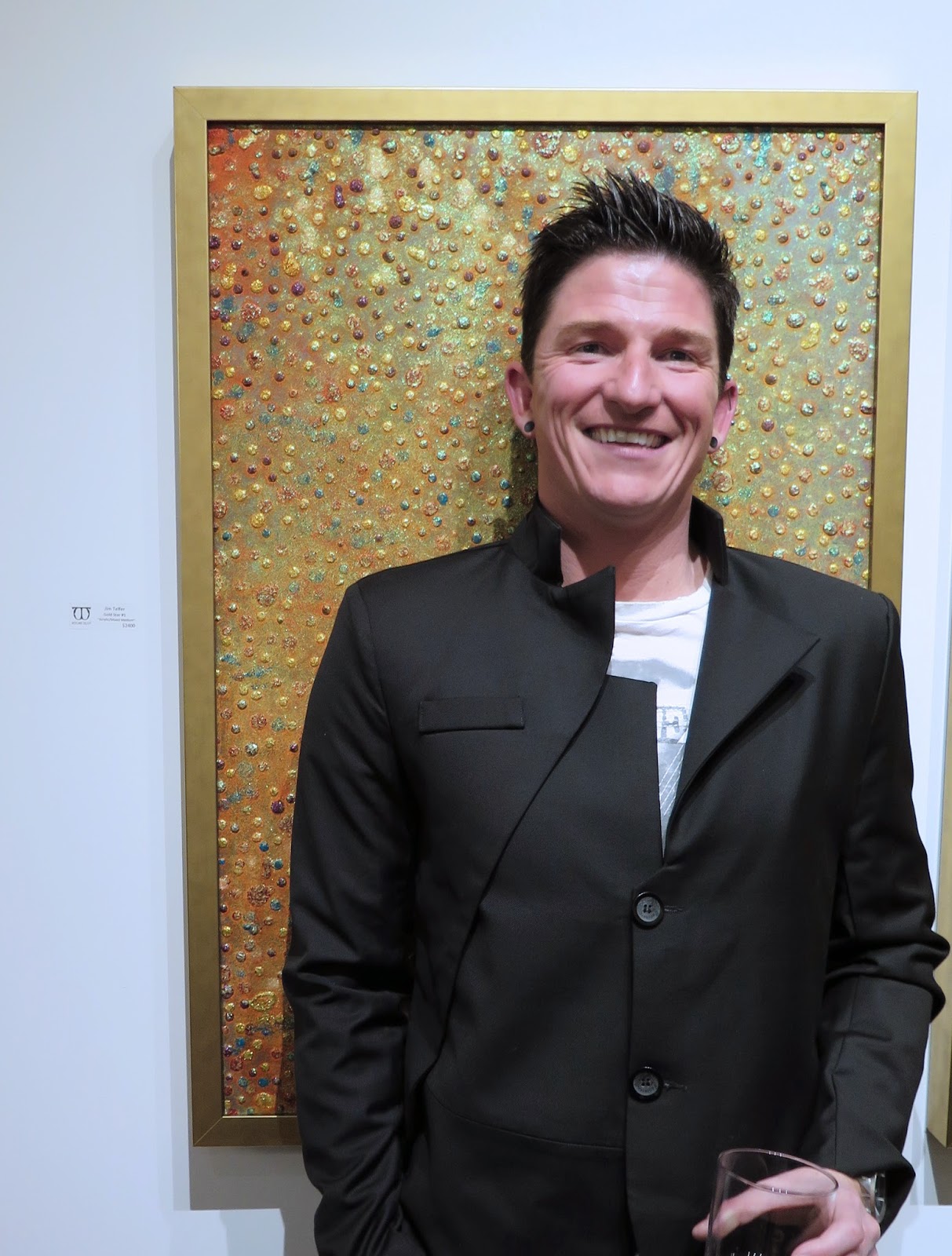 This guy's jacket drew my eye with the interesting lapel design 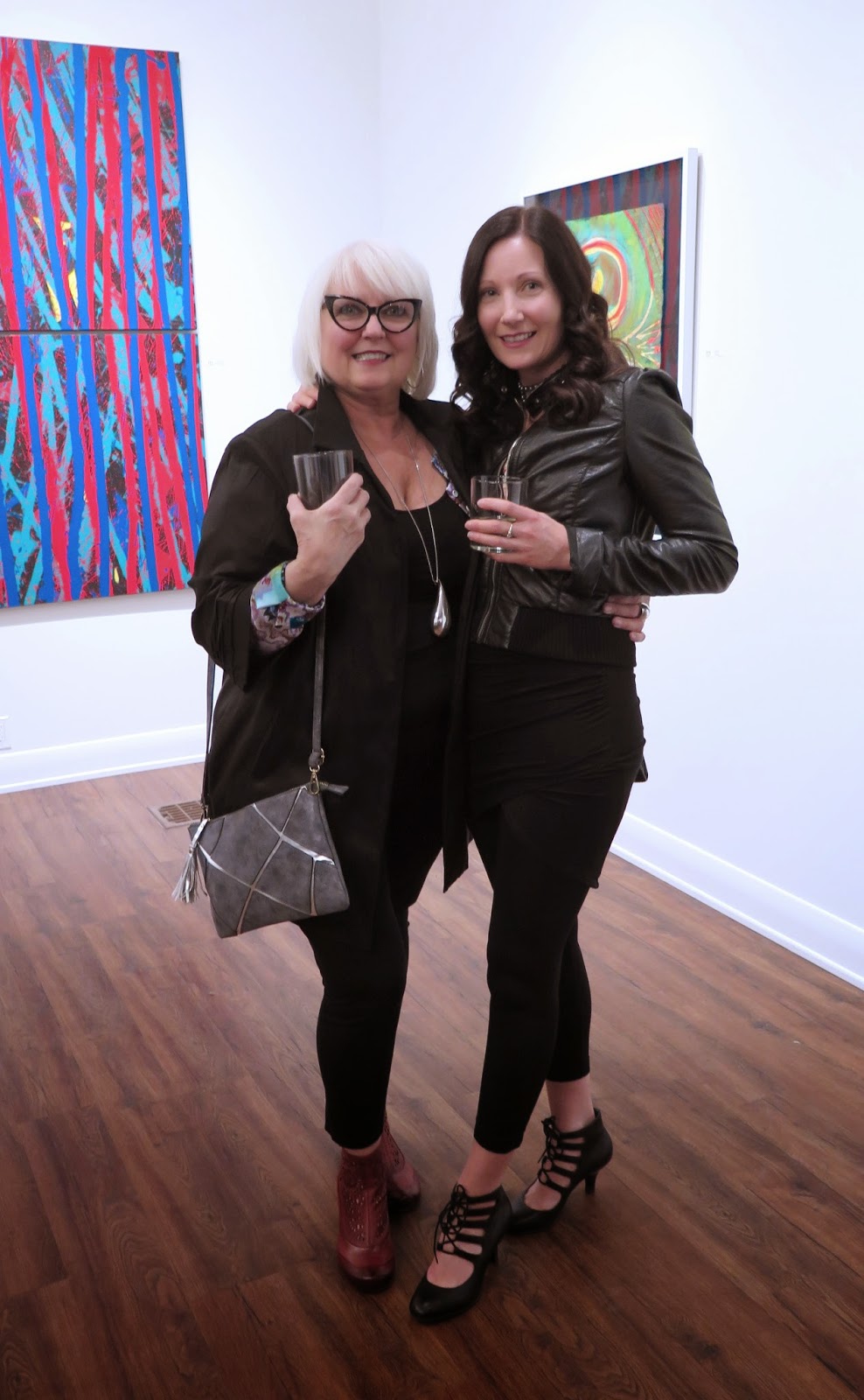 This mother and daughter share a love of fabulous shoes 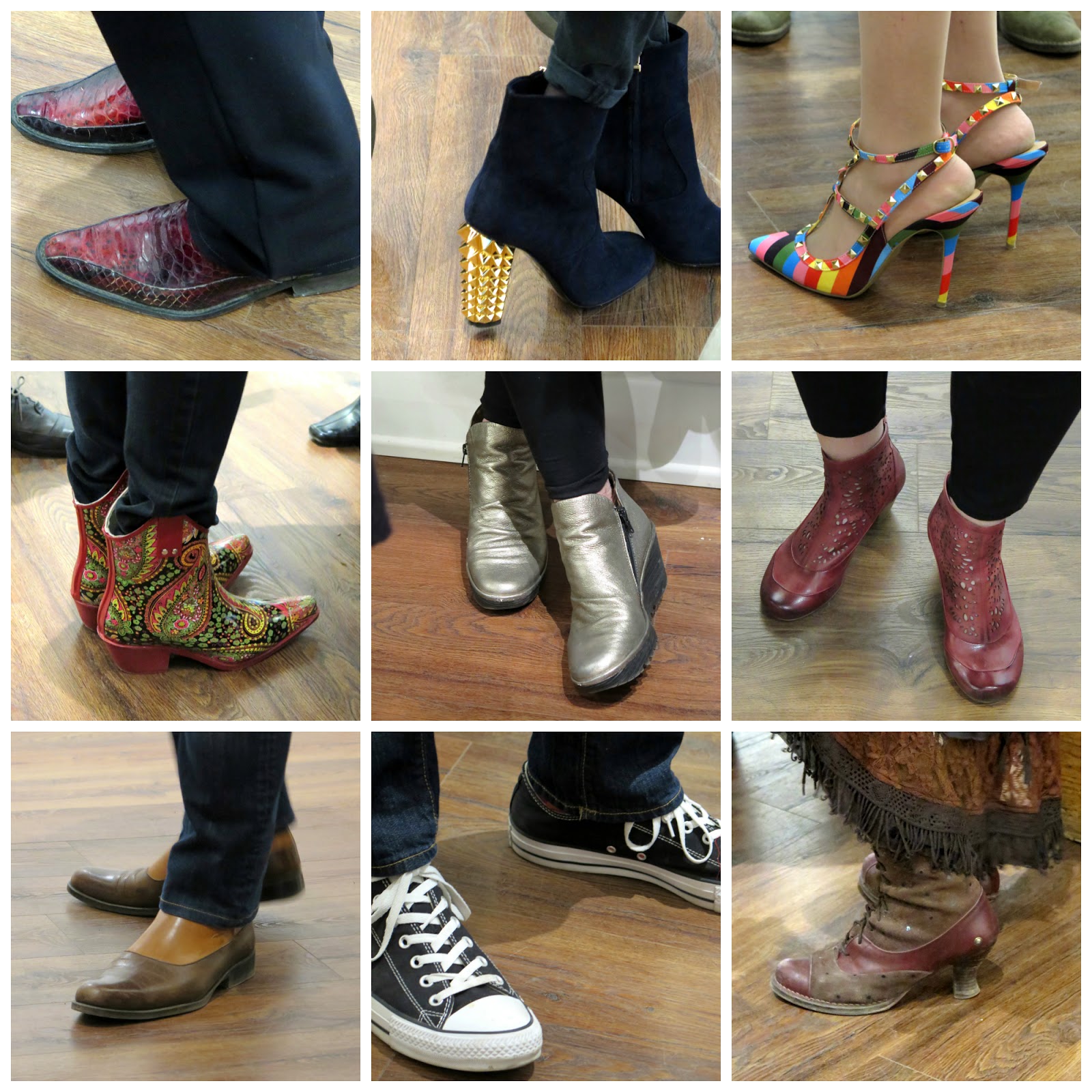 In fact, there were so pairs of stylish footwear on the floor that at one point I just sat on the couch and shot photos of shoes.  Telfer did the design on the colourful heels in the top right corner. 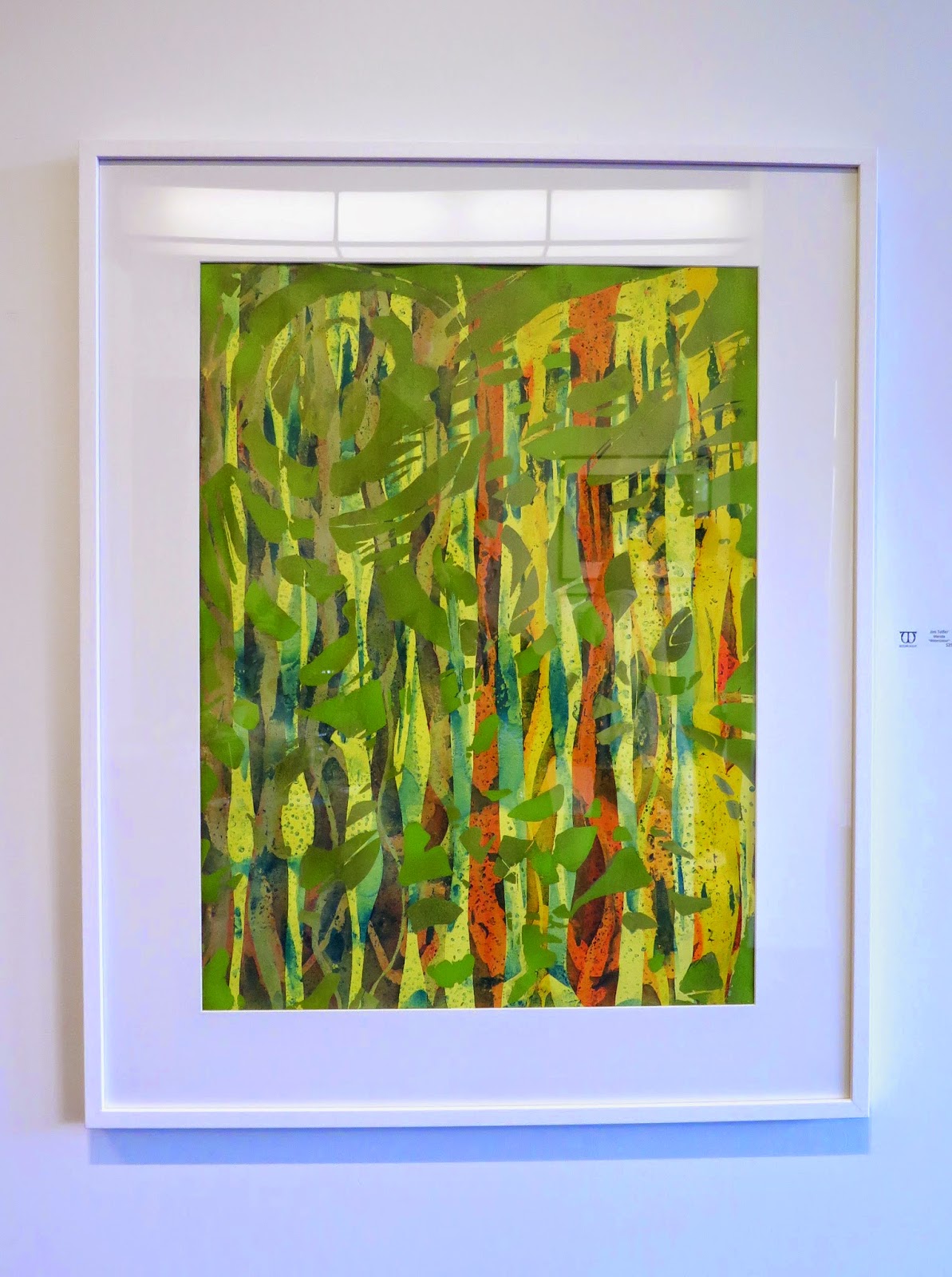 "Merida", with fresh shades of green and slashes of orange, was one of my personal favourites 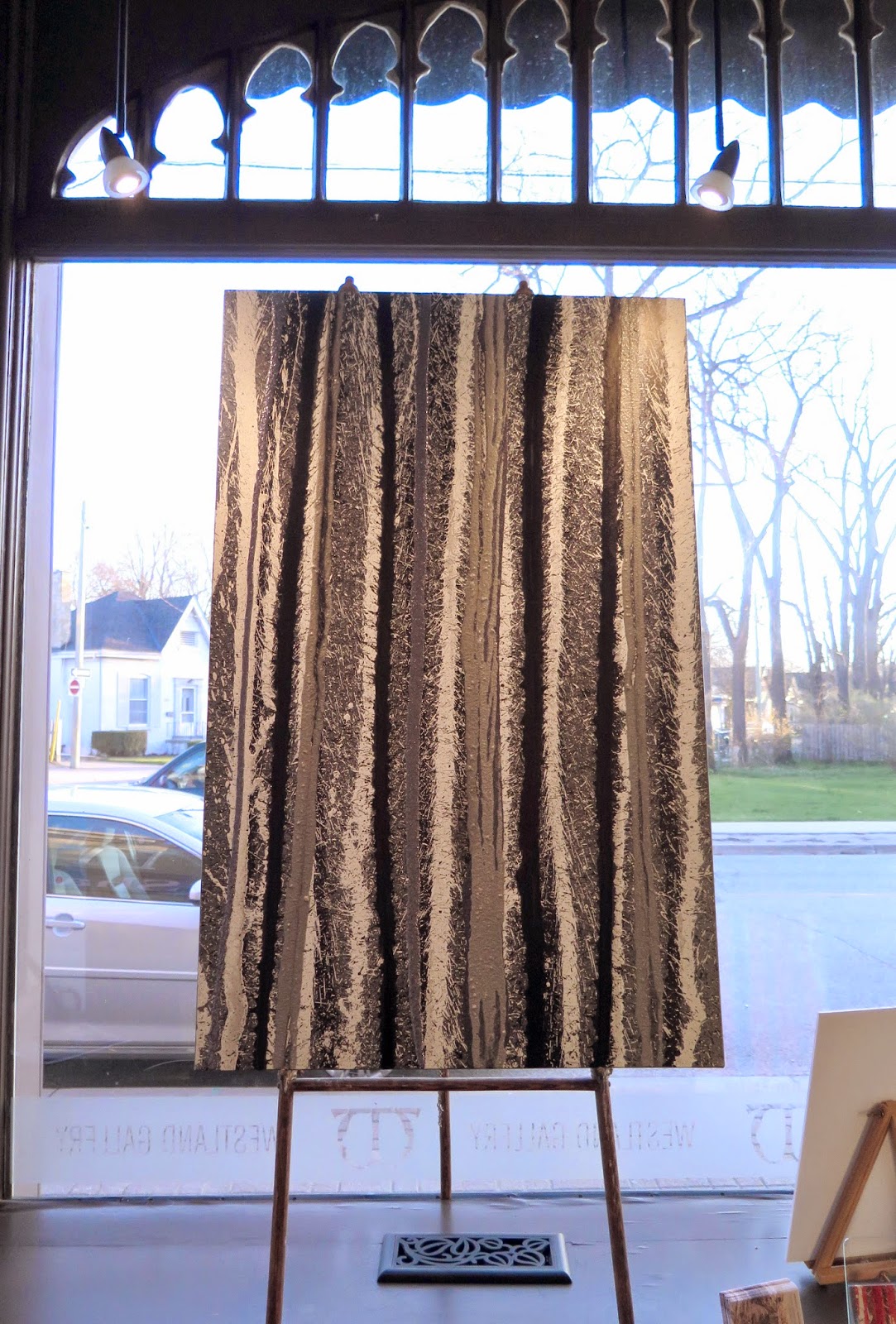 The only work in the show that was subdued, colour-wise, was this painting titled "silver birches".

Telfer's exhibit is at the Westland Gallery in Wortley Village until May 9th
Posted by Forest City Fashionista at 9:07 PM