Several months back I wrote a post about my thoughts on what made for a meaningful life, and mentioned that I had completed the training required in order to volunteer as a Big Sister.  I had been looking forward to mentoring a young (or teenage) girl that needed an additional positive role model in her life.

Well, unfortunately, it was not to be.  The agency tried for several months to find me a match, and was only able to find one girl that lived in close enough proximity to me to make it feasible to plan outings.  When she and I met, it was clear that I really had no idea what most 12 year old girls like to do, and that my expectations needed adjusting.   I consider myself to be in relatively good shape, but my physical limitations became glaringly obvious when discussing what my potential little sister hoped to do on outings with me.  I was hoping to do crafts and go to the library; she wanted to go swimming and tobogganing, and we agreed we were not going to be a good match.  Unfortunately, Big Sisters was not able to find any other potential matches for me, even when I widened the age range that I was looking for.  I was very disappointed, and it's hard not to take that kind of thing personally.  I knew that my age may make matching difficult, although I was re-assured that they have big sisters of all ages.   I realized that I had been hoping to find a little sister who was like me when I was that age - a bit of a weirdo, so to speak.  I'm sure that kid is out there somewhere, and I hope she finds a cool Big Sister, even if it won't be me. 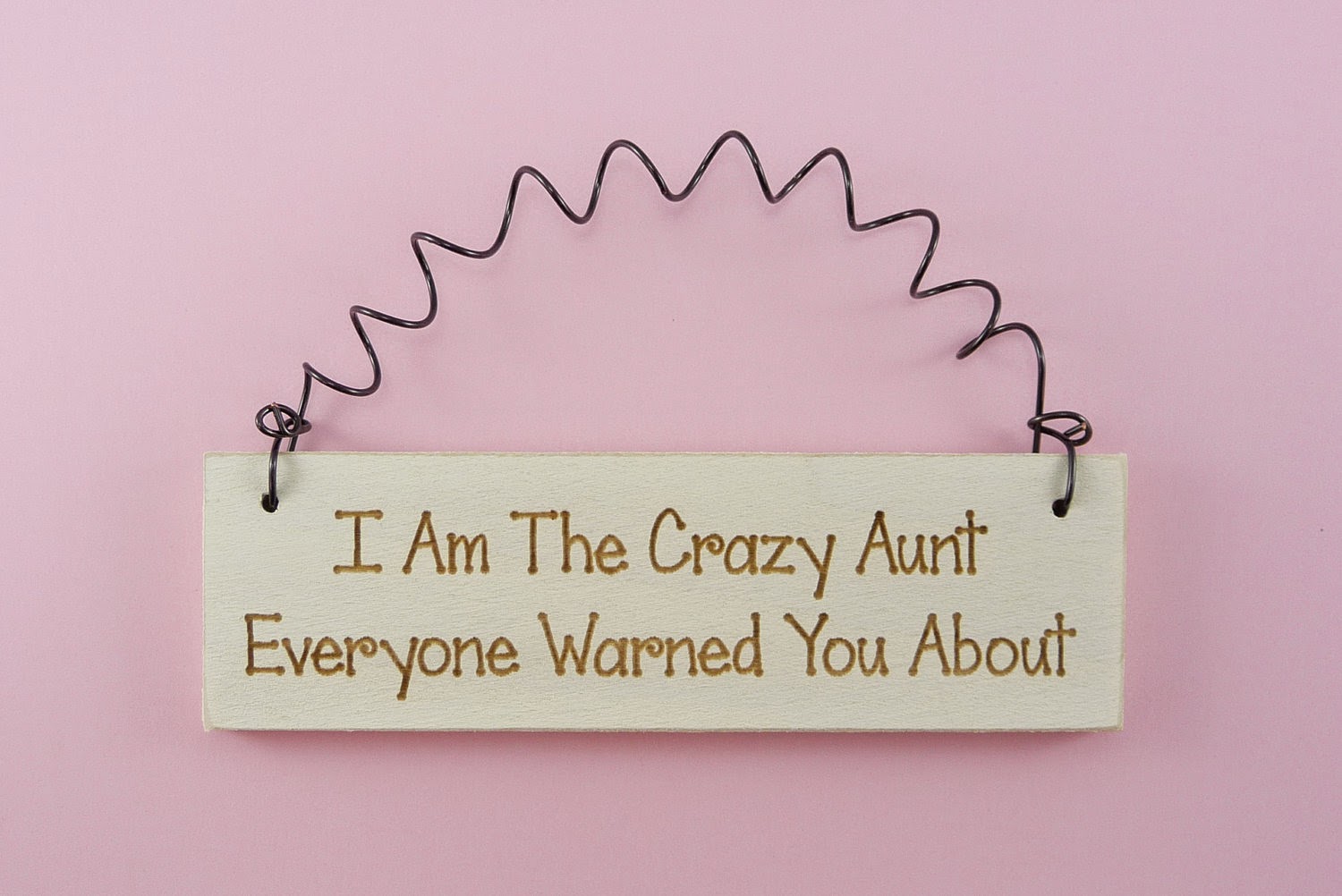 if you really wanted one of these to hang on your door,  you can find this on Etsy 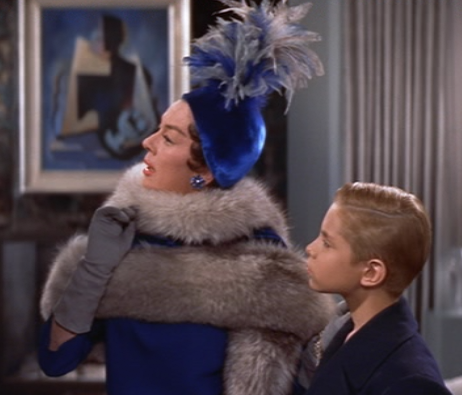 The character of Auntie Mame, created by American author Patrick Dennis, is the classic "crazy aunt", and Rosalind Russell was note-perfect in the role on film.  I may not have the spectacular New York apartment, or the multiple husbands, or the unwed mother personal assistant.... 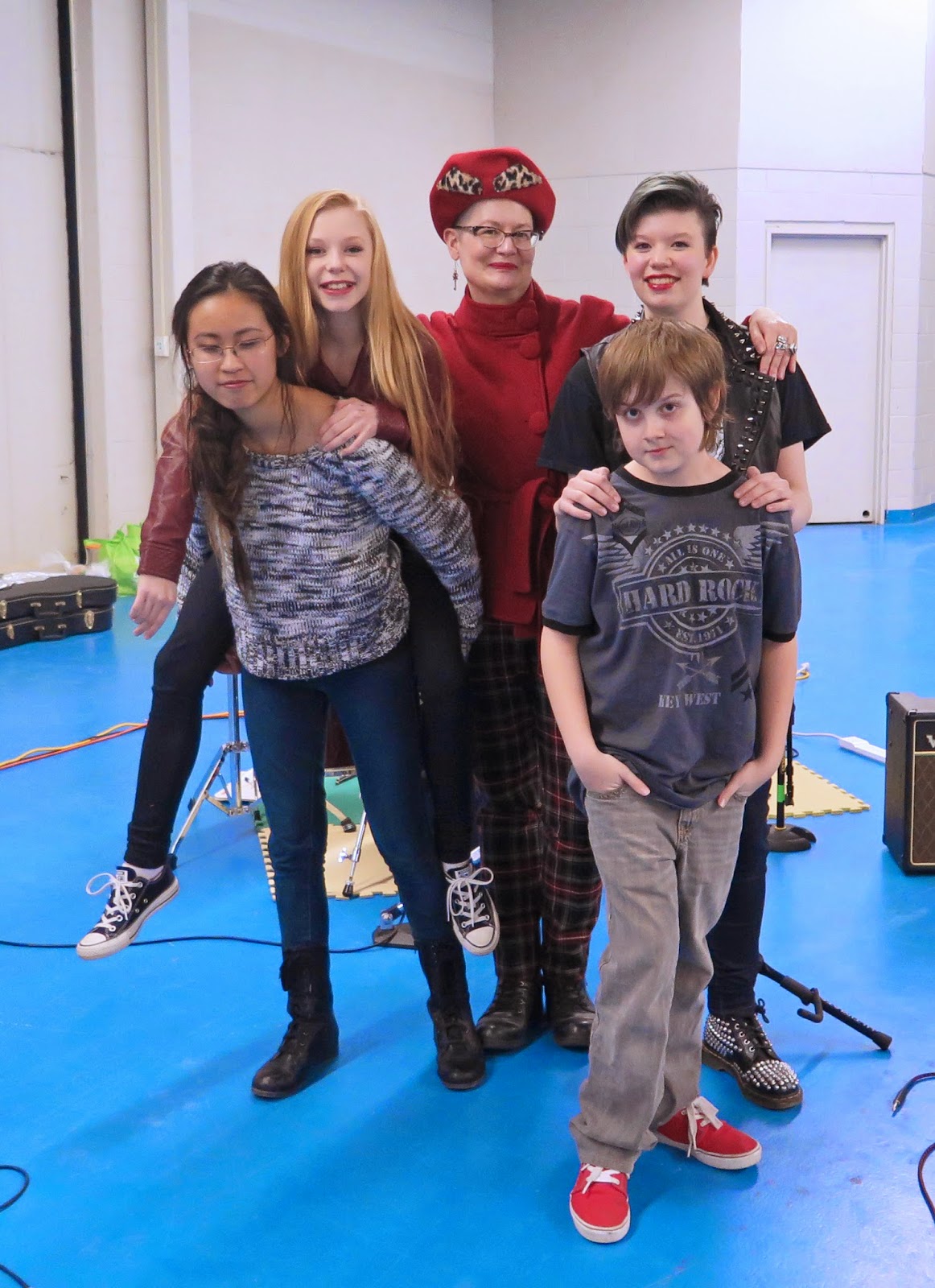 ...but I have the hats!  I would be these kids' Crazy Aunt any day 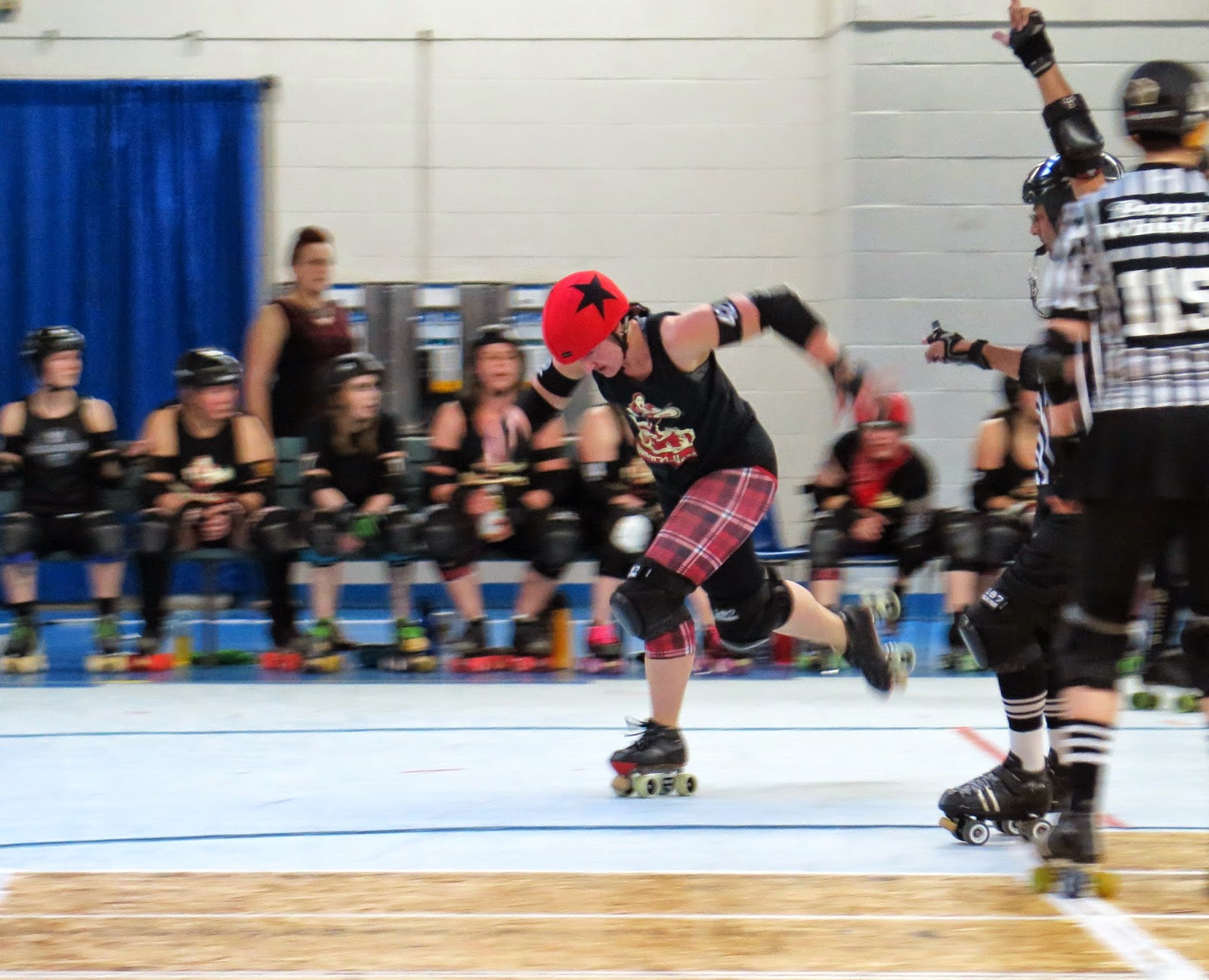 I'd been laid low with some kind of cold/flu thing for a few days, but felt well enough by Saturday night to go and watch my bestie and the rest of the Timber Rollers play against the Hamilton Eh Team.  That's Heather (aka Torquemada) seizing the lead jammer position.  It was a good game, both teams played very well, but the Timber Rollers triumphed in the end. 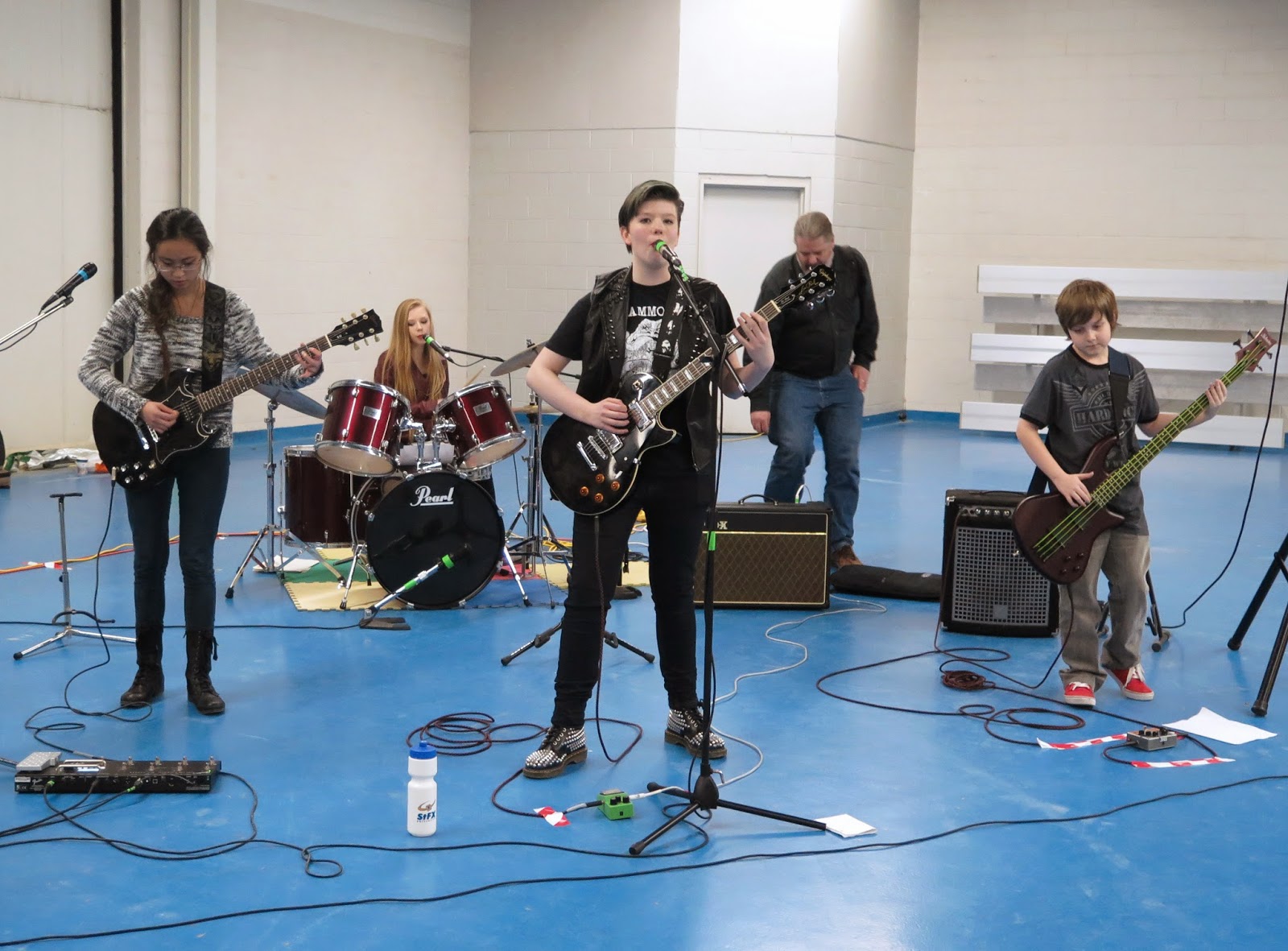 I had also wanted to go because these kids were playing the half time show.  You may remember me singing the praises of Populusque Romanus in a couple of previous posts.  From left: Queena Liu on guitar (also keyboards), Lucy Grant (drums and vocals), Grace Grant (lead vocals and guitar) and Connor Elgie (bass and keyboards).  The guy in the background is Lucy and Grace's Dad who is the band's dedicated Roadie. 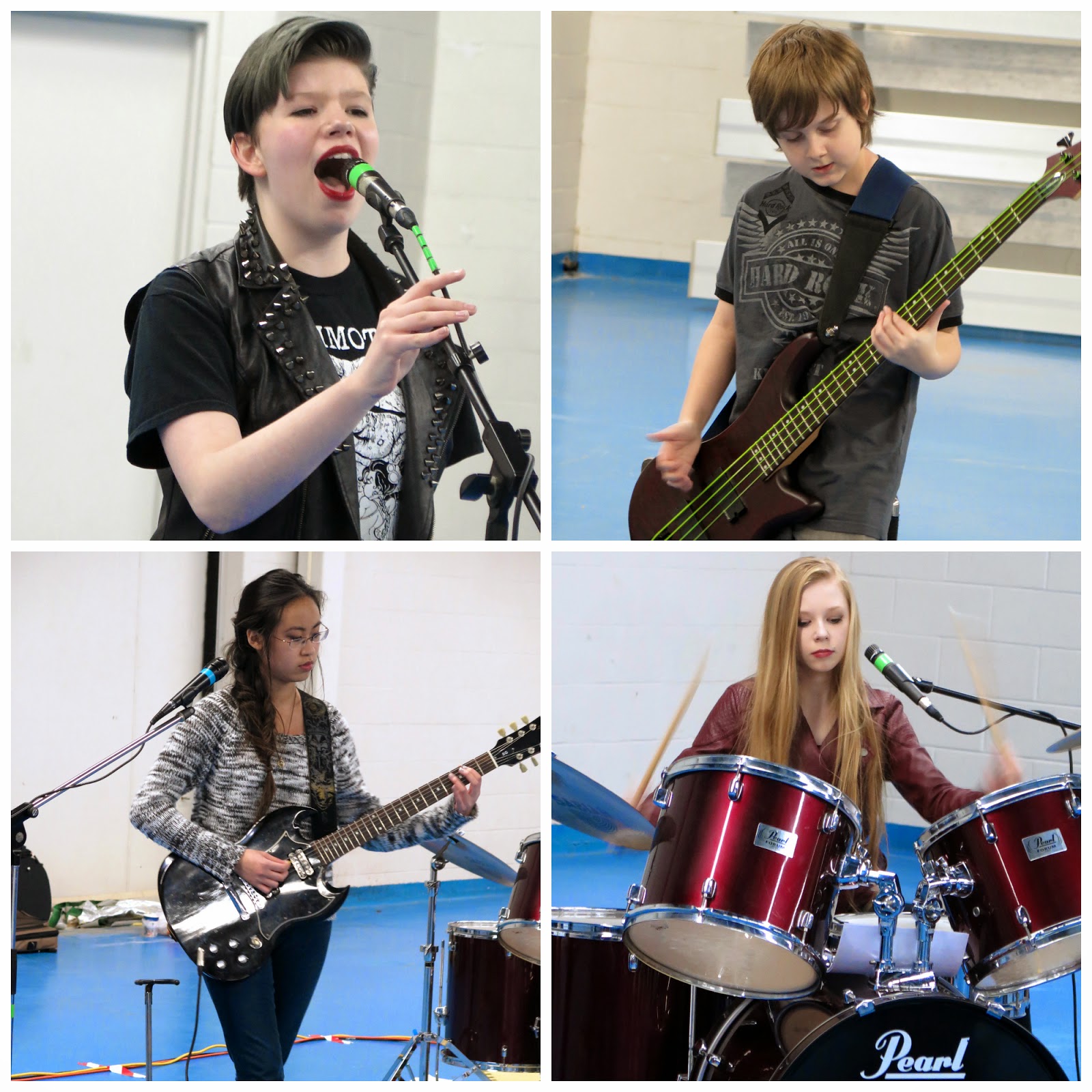 Even though it's only been about eight months since I first saw these kids play, they get more mature each time I see them.  The girls are wearing lipstick for heaven's sake!  Lucy, usually the quiet, unflappable presence behind the drum kit surprised us all by singing "House of the Rising Sun", adding vocalist to her list of talents.

I've met all their parents and they are so supportive of their kid's multiple creative endeavors.  If it's not enough that they are all very talented, they are also just so damn nice!  They put up with my potentially embarassing Fan Girl behaviour at their gigs and constant photo-taking; I was asked more than once by another audience member if I was their mother.   From now on, I should reply, "No, I'm their crazy Aunt!" 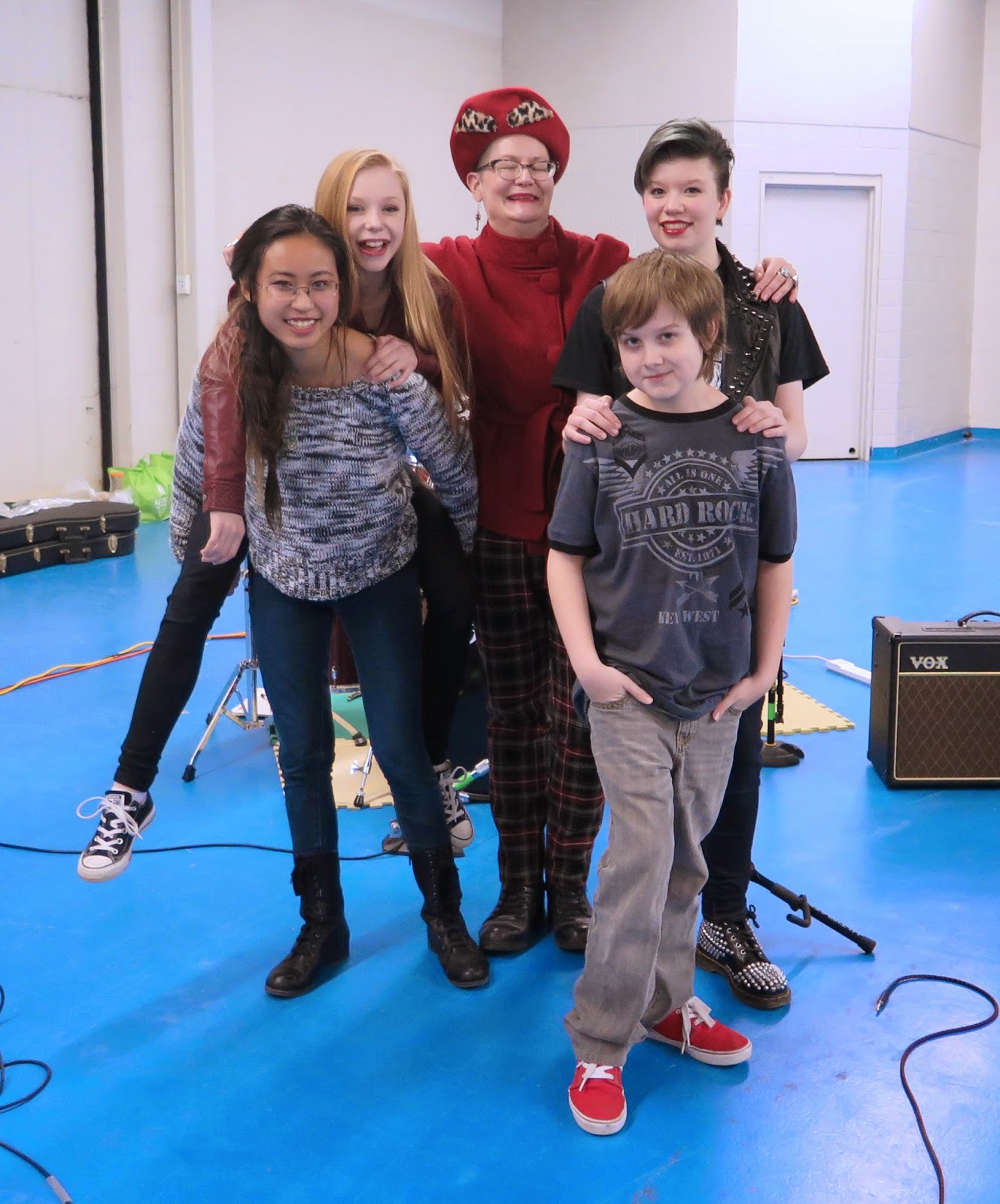 I'll end with this photo in which I look like I've just been goosed, but is a great photo of the band.  I think this shot was snapped just as I realized that my ring was caught in Queena's hair.  Thanks to Karen Grant for taking the photos.

If you're in need of a crazy, hat-wearing Aunt to round out the table at family gatherings, let me know and I'll check my calendar!