Sunday at the Art Gallery With Linda 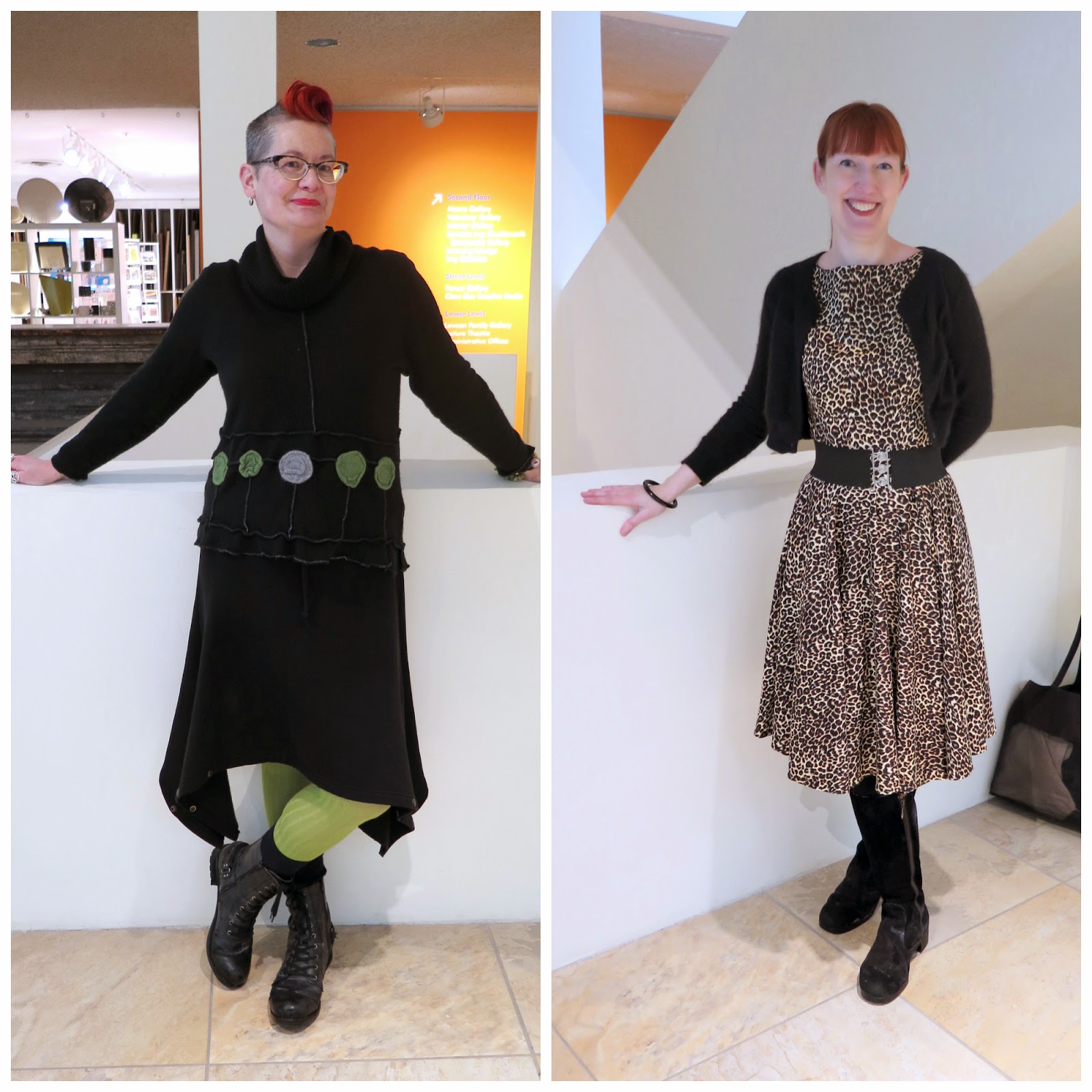 This past Sunday, these two women met for brunch, and then went off to Museum London to see a presentation by Little Ray's Reptile Zoo, a privately funded zoo and animal rescue that has a travelling reptile show.   Linda and I find snakes, lizards and other scaley critters rather fascinating so we thought it would be an interesting way to spend an hour. 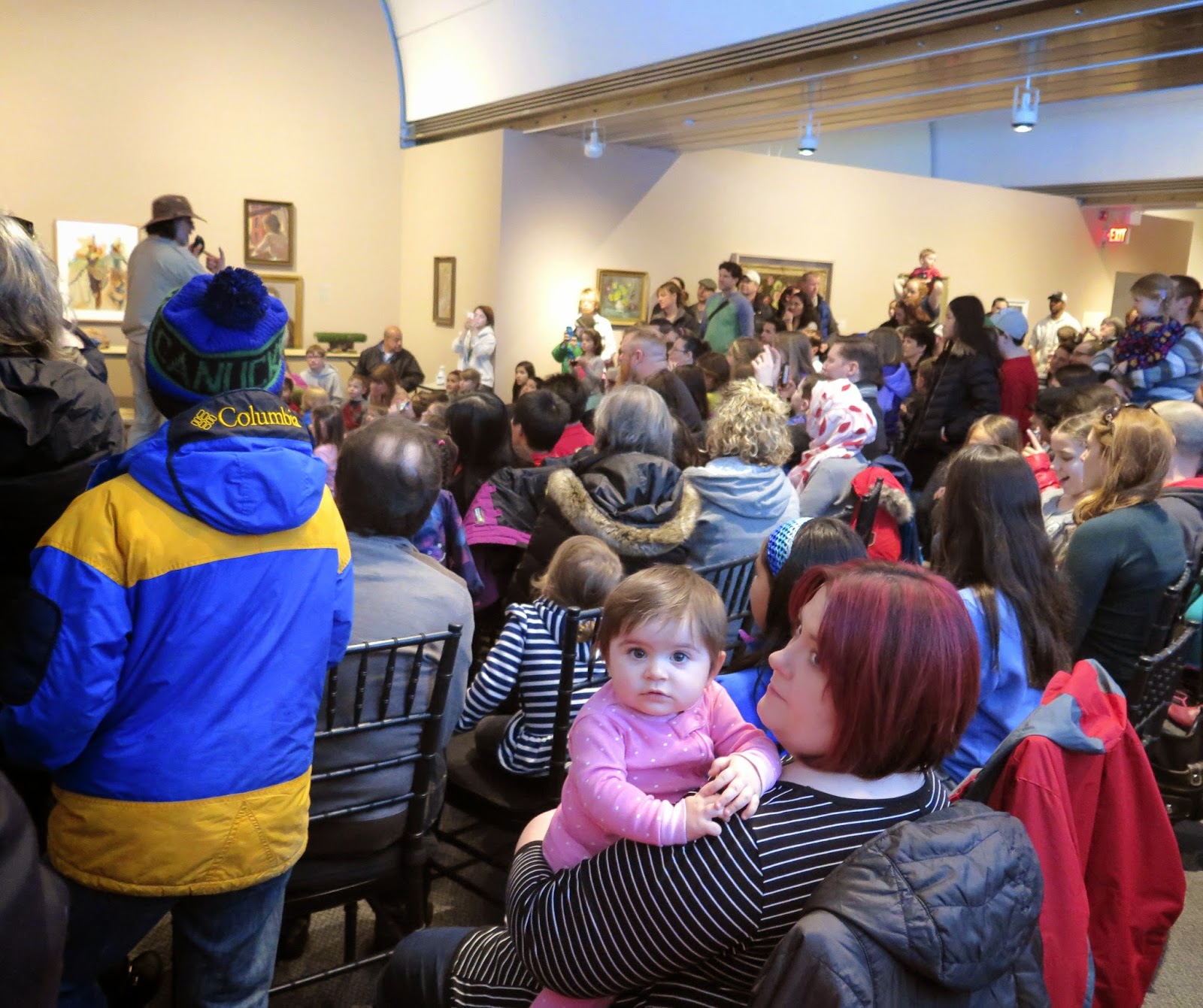 When we arrived a few minutes after the show had started, we found ourselves at the back of a large crowd of children and adults.  The man in the hat in the upper left of the photo was holding, and talking about a particular salamander that is on the endangered species list.  Unfortunately, the noise level in the room was so loud that you could barely hear what he was saying, even though he was almost yelling.  At one point, a man standing near me put up his hand and asked if the presenter could speak louder, and without thinking, I said out loud, to no one in particular, "maybe if everyone shut up, we could hear him".   In that moment, I officially became a crochety old lady.   I recalled that if I was ever taken to a show or exhibit when I was a kid, there was a conversation beforehand about the behaviour that was expected of me - pay attention and be quiet.  Apparently that talk isn't had by many parents and children anymore.  When we realized we were never going to be able to hear what the poor reptile guy was saying, we decided to explore the rest of the gallery. We crossed into the large main gallery and saw this, prompting us to both exclaim "DRESSES!" 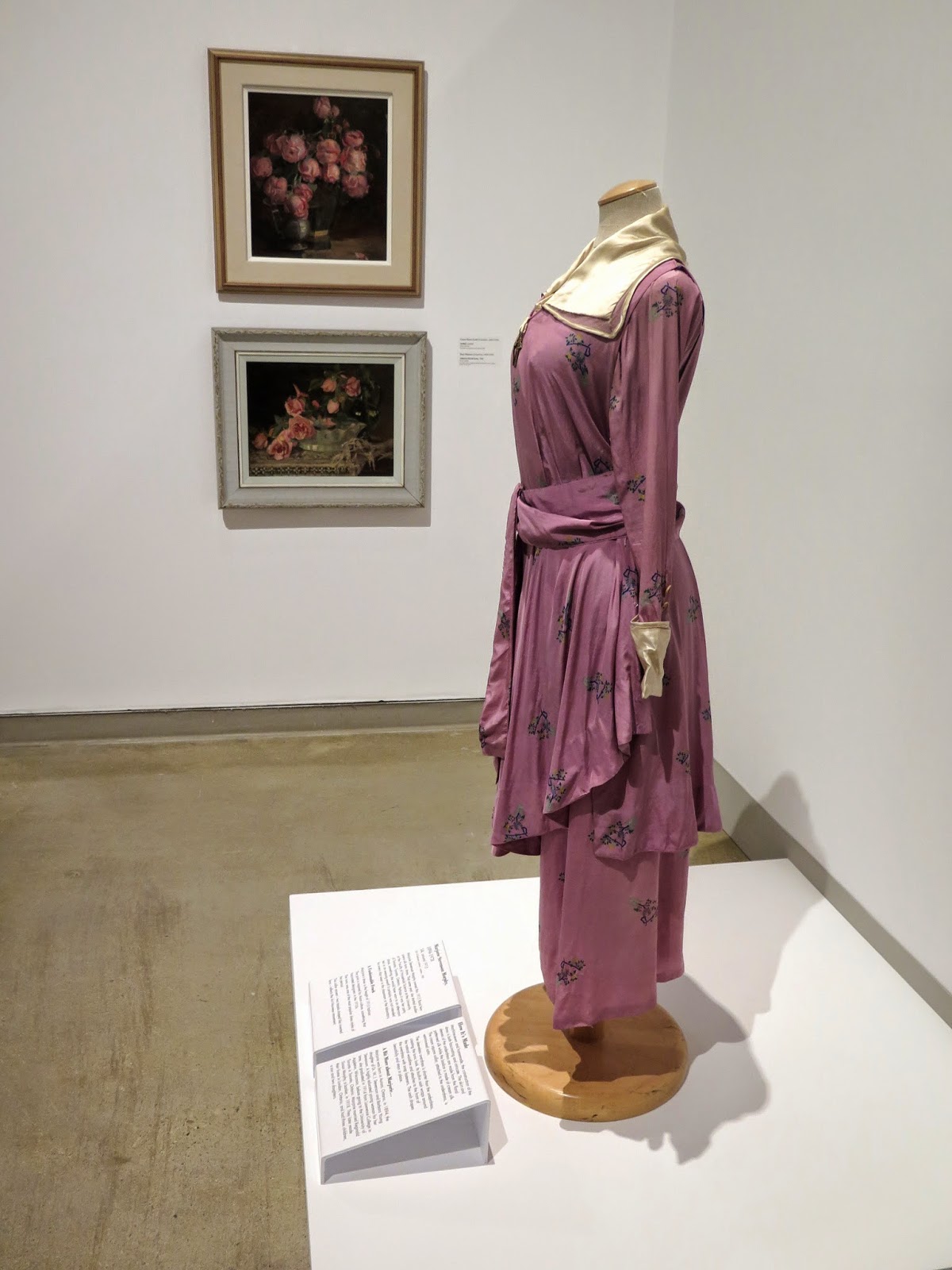 The dresses were part of an exhibit titled "In Full Flower", featuring women's dresses, decorative objects, and paintings with a floral motif from the Museum's collection.  Flowers have been used extensively throughout history as a decorative motif by artists, fashion designers, and crafters and have held a variety of symbolic meanings.  They are usually associated with femininity, and thus are a popular choice for fabrics for women's clothing, hence the dresses on display.  Unfortunately, the paintings that were chosen for the exhibit were mostly dark and featured rather droopy flowers (notice the two on the wall behind the dress) which made them not worth documenting.  The silk dress in the photo from around 1915 was owned by Marjorie Stevenson Morphy, and is an example of a very fashionable outfit of the time period. 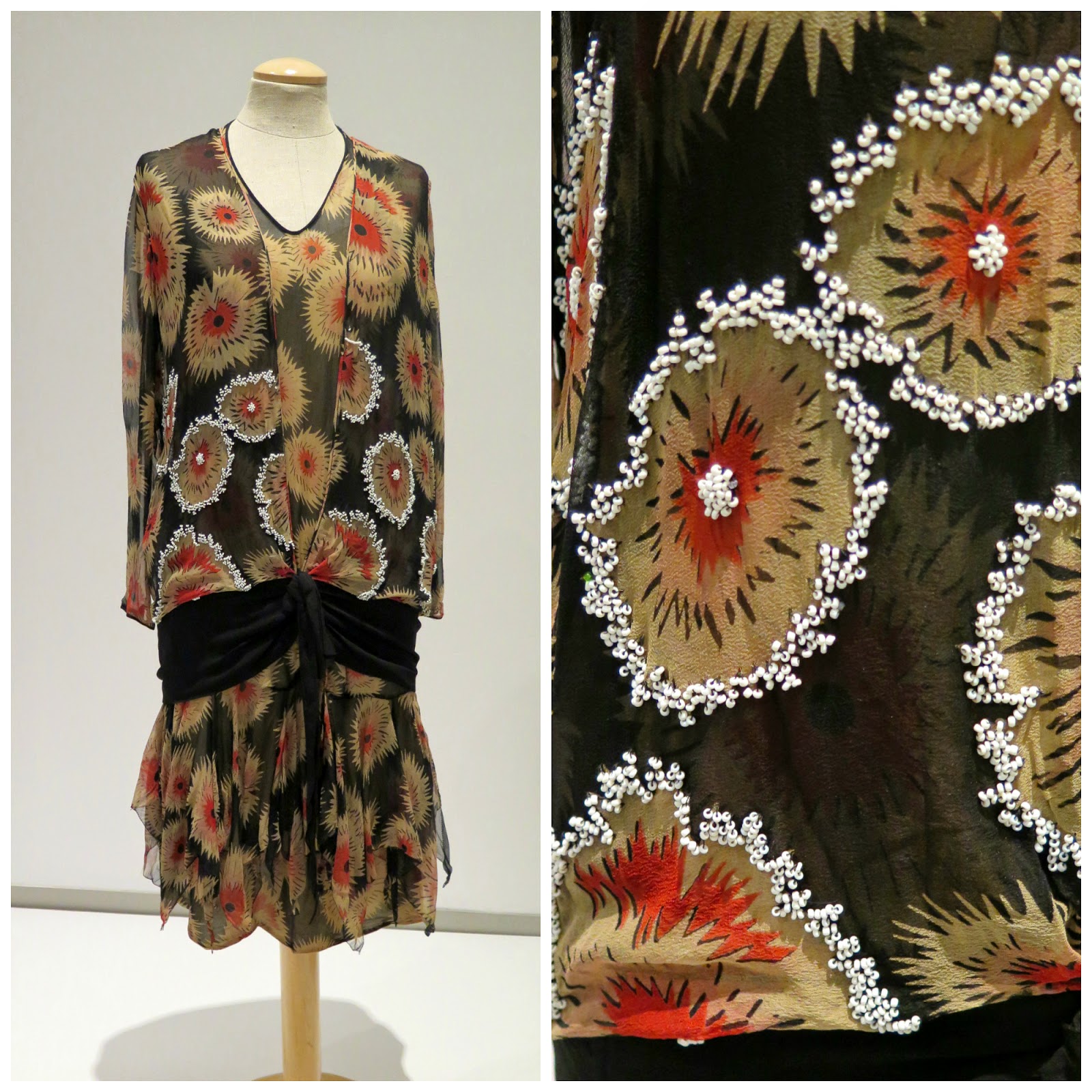 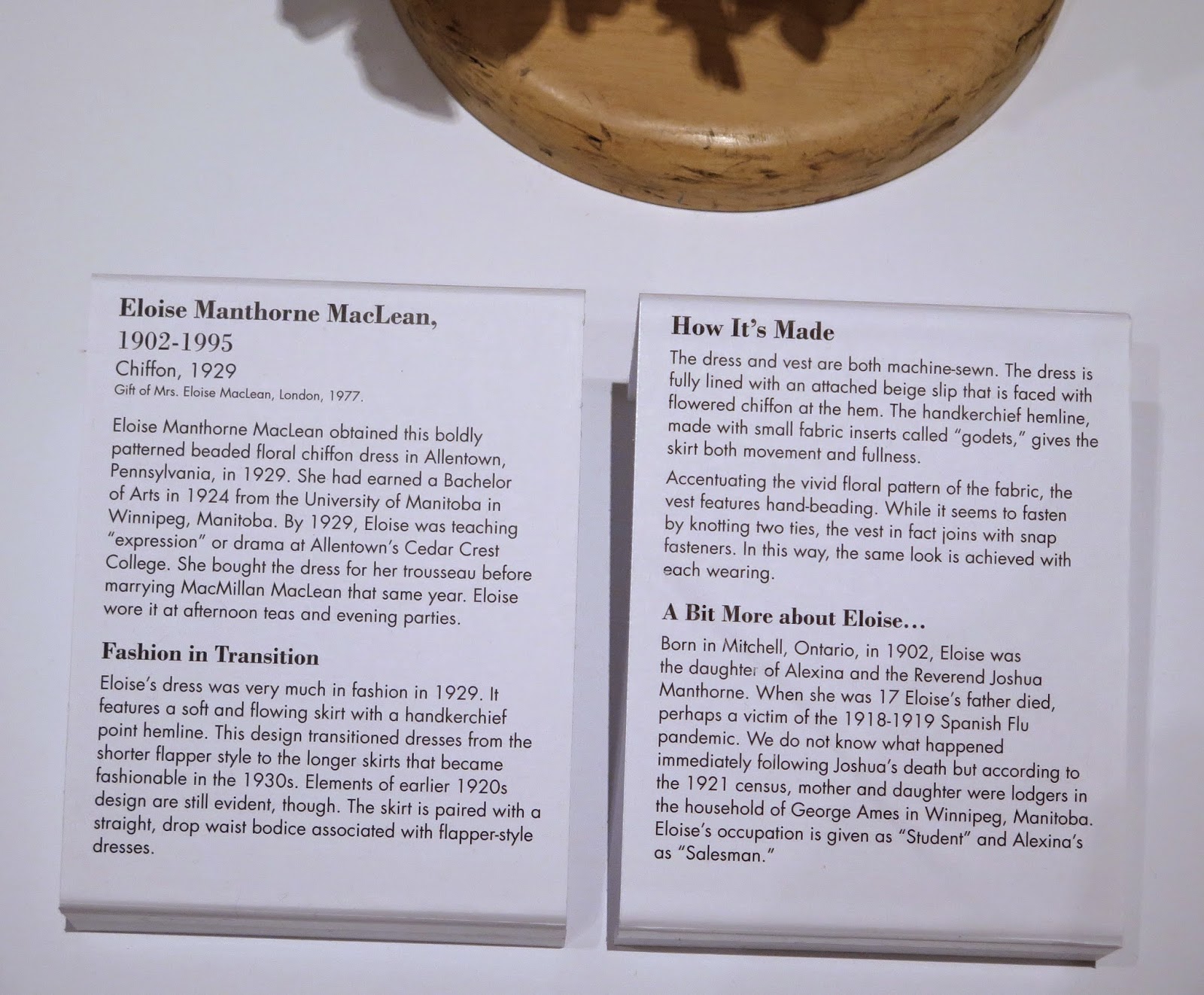 A very welcome, and quite fascinating addition to the exhibit was the display cards below each dress that not only described the dress and how it was made, but also gave some information about the  woman who had owned it.  The cards in the photo above are for the chiffon dress in the previous photo.  I love the name Eloise! 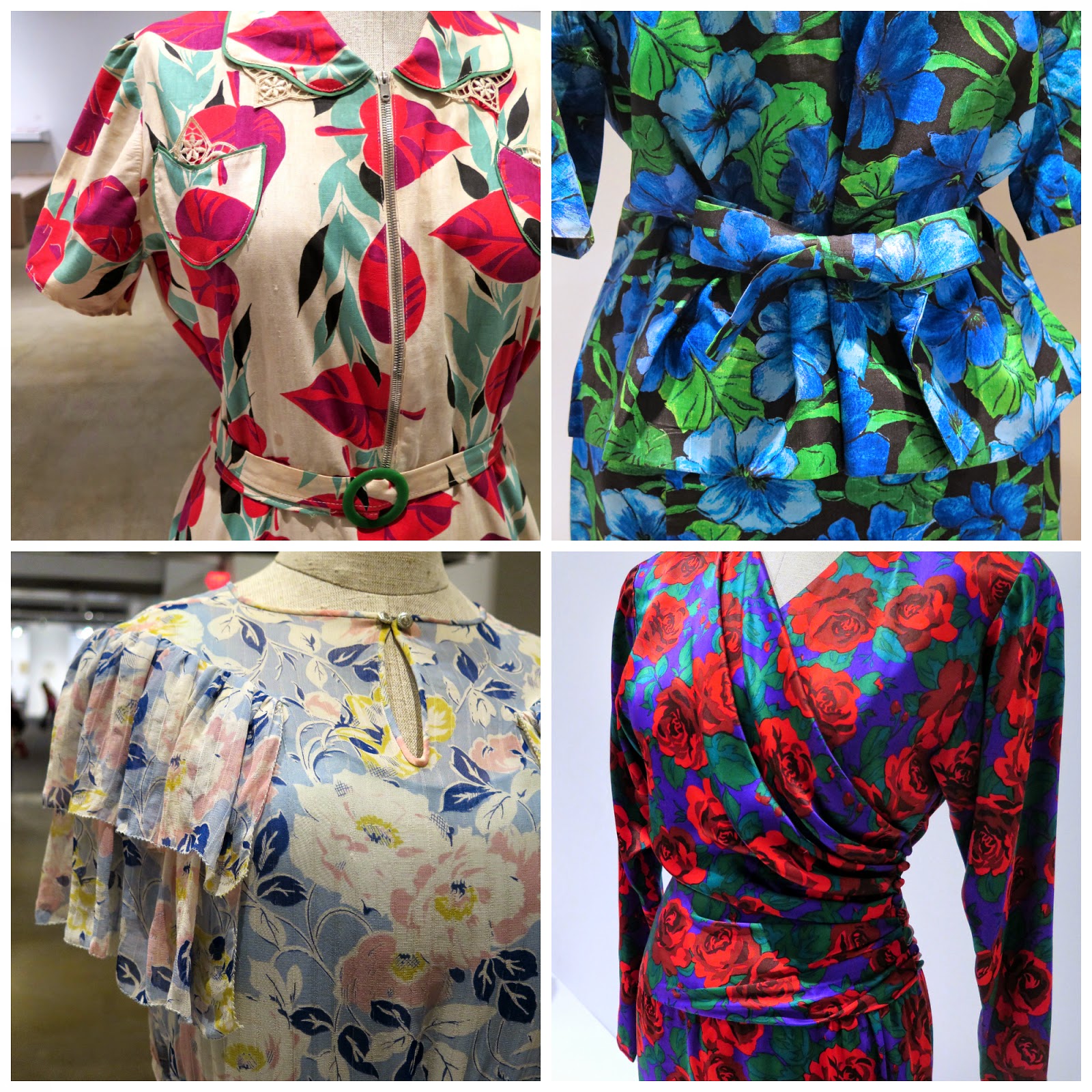 Details of some of the dresses on display (clockwise from top left):  Lace detail on the collar and pocket of a 1940's cotton dress donated by Western's Brescia College; waist detail of Arnold Scaasi silk dress purchased by Judith Roger in 1964 for her wedding trousseau. Judith's daughter Milisa Burns then wore the dress as a going away outfit after her own 1991 wedding; vibrant floral pattern and draped bodice and waist of a 1980's dress owned by Isabel Wilson Roger; ruffled capped sleeves on a 1930's georgette dress worn by Bertha "Mabel" Riether when she was in her 50's. 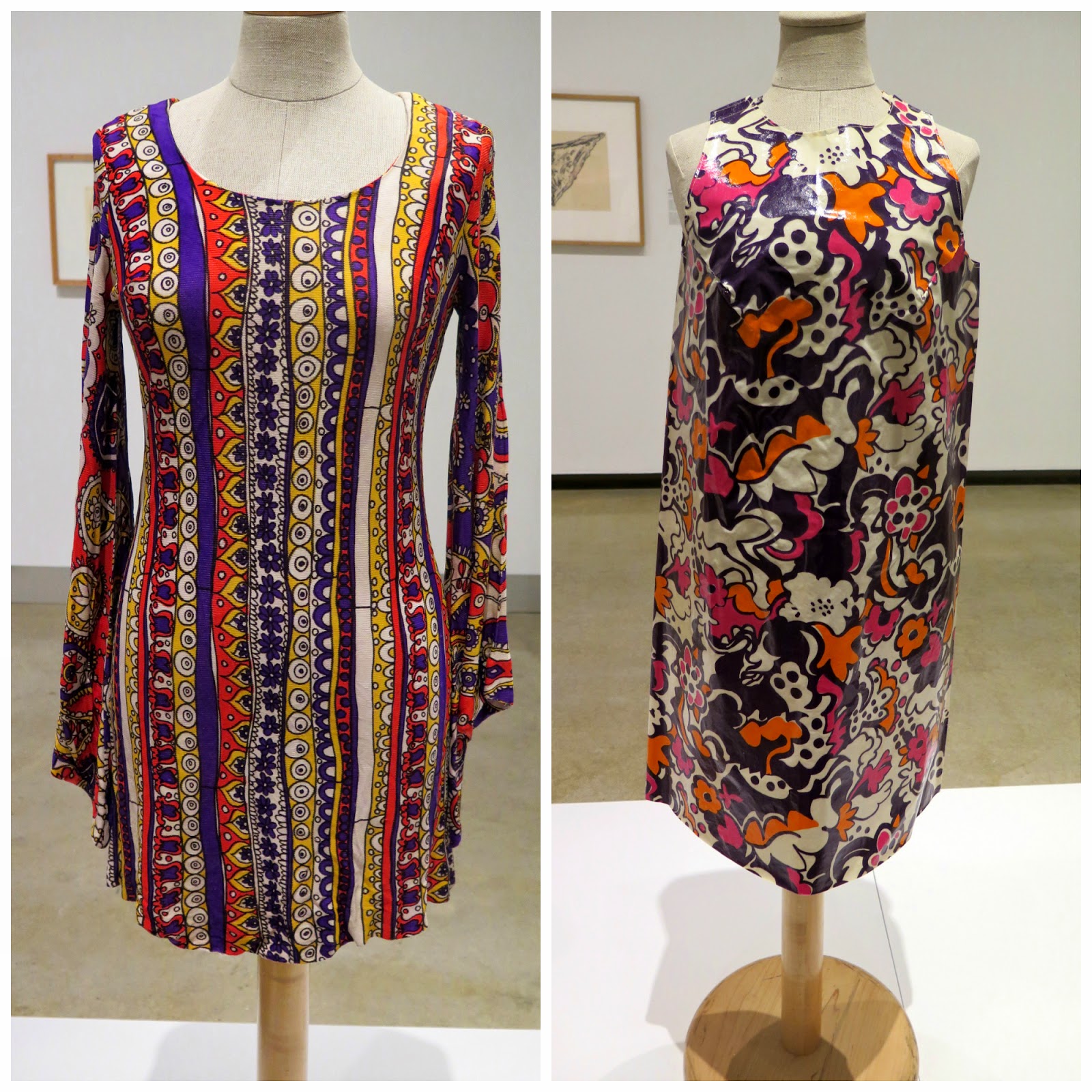 The 1960's were represented by the polyester dress on the left, which was purchased in Toronto in 1969, and the PVC dress on the right designed by Canadian-born Karen Moller 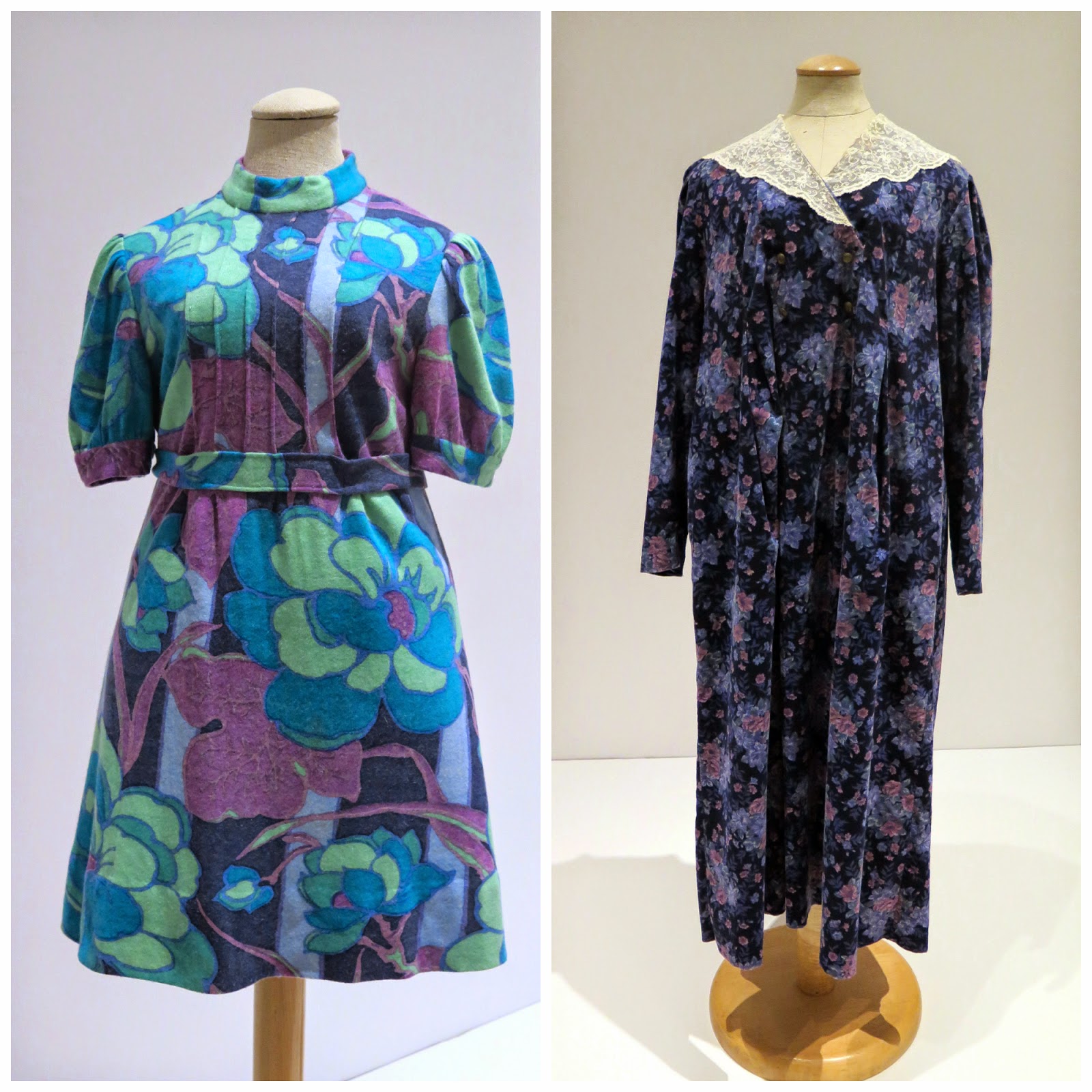 Linda and I were intrigued by the description for these two dresses, both owned by Sophie Skaith.  Skaith made the mini dress on the left in 1970 and according to the information card, she wore it a lot because "it just made me feel so good and I just loved to wear it".  We were surprised to see that the rather dumpy Laura Ashley dress with the lace collar was also owned by Skaith, and it was noted that it was one of her favourites.   Linda and I were very tempted to try to contact Ms. Skaith, who is still alive, and find out how the same woman that made the bold flowered minidress on the left could also be so enamoured with the drab, shapeless dress on the right.

In Full Flower:  Handpicked From the Collection
is on view at Museum London until April 19th
Posted by Forest City Fashionista at 10:13 PM