Working For The Weekend


When I was growing up, it seemed that most of the adults I knew toiled away at their jobs during the week just so they could relax and enjoy their life during those two days known as The Weekend.  My father was a carpenter, and my mother also worked outside the home from the time I was about 8 years old.   I remember her being tired and harried most of the week, having to look after a family after working at a job that was not particularly fulfilling in any way except that it paid the bills.  I was determined to not be one of those people whose "real life" was restricted to Saturday and Sunday.  In  my 20's, I worked in a series of low-paying retail jobs and found I could pursue things I enjoyed like writing, dancing, and photography during the work week.  I could wear pretty much whatever I wanted to work (most often it was army boots, skinny black jeans, and over-sized men's jackets);  I could go dancing on Monday night til 1:00 am, and still make it to work on Tuesday by 10 am.  I had my own weekly show on the local university radio station, and was able to plan my theme for the week while working my shifts in a local record store.  There was no great divide between my work life and my non-work life.  It didn't seem to bother me that much that I had no money, benefits, or plans for the future.

That all changed when I finally got a "real job" - one with a decent salary and benefits that required more of me than just ringing in customer purchases and keeping an eye out for shoplifters.  Suddenly, I found I couldn't stay out late during the week and function well at work the next day, and working a 9 - 5 schedule meant that evenings during the week were set aside for  errands and laundry.  The activities that gave me joy were set aside for weekends and holidays, and for many years, I would mourn the fact that I hadn't found my "dream job", which would allow me to get paid for doing the things I was passionate about.  I finally came to terms with the fact that things I love to do don't pay very well, and realized there was nothing wrong with working at a job that wasn't particularly exciting, or inspiring, as long as it was a means to an end.   I try to make the most of every weekend, savouring those precious 48 hours during which I can set my own schedule (you can see why I didn't have children), see and do things I enjoy, and work on projects that feed my soul instead of my bank account.

So what did I get up to this weekend?

After a trip to the market with Heather, followed by a coffee and chat, I stopped at one of my neighbourhood thrift stores where I saw this.... 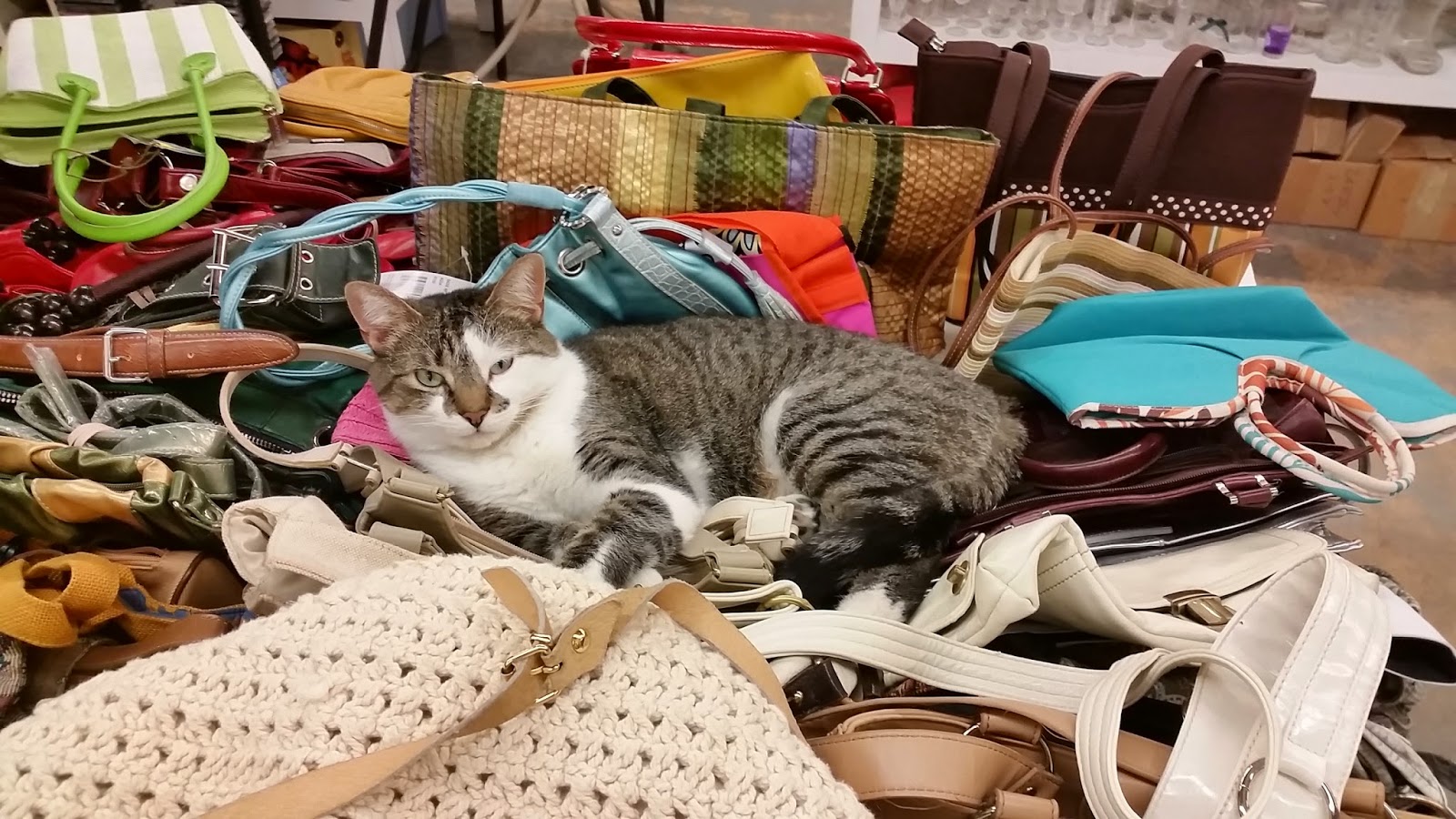 This would be Miss Kitty, lounging in a pile of purses at Silk Road.  She and Smoke, the other store cat, pretty much run the place.  They have not, however, learned how to operate the cash register (yet) 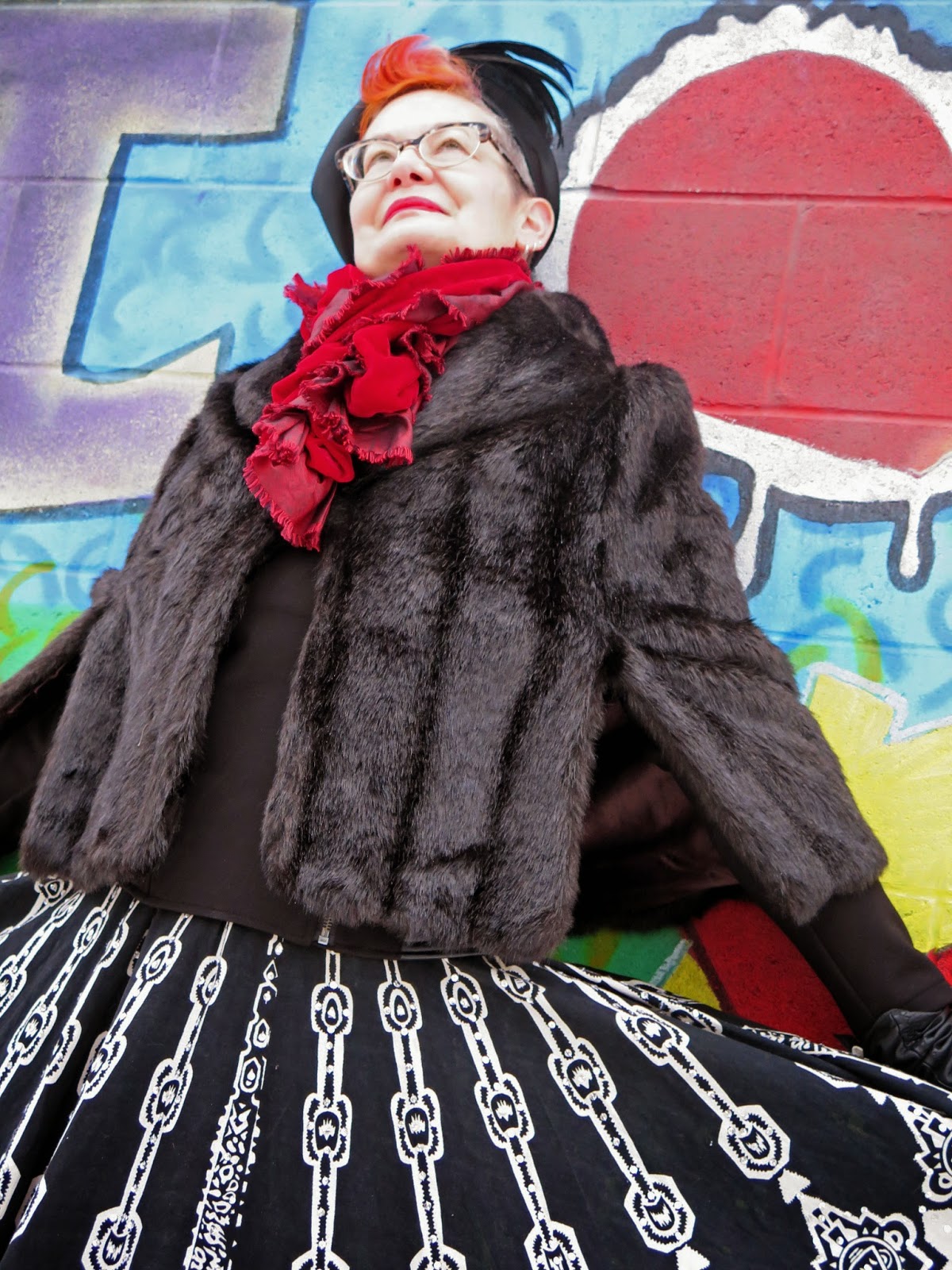 I scored a $5 skirt that inspired an impromptu photo session with my friend Sylvie, who I had planned to meet for a cocktail and a gab later that afternoon. 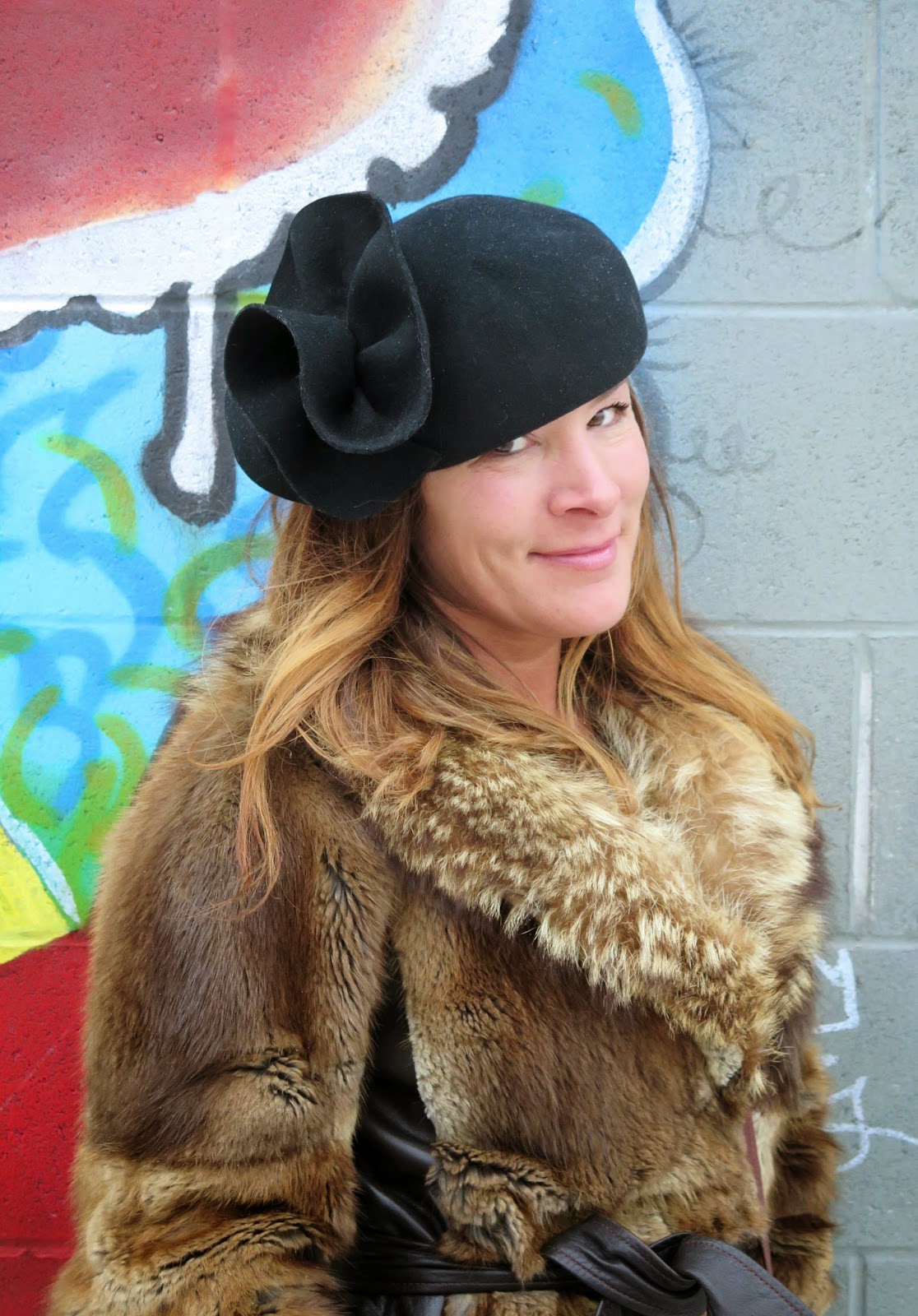 Sylvie had told me she would be wearing a marvelous hat for our get-together, and she most certainly was.  She was also wearing a beautiful fur and leather vintage coat she found at Value Village.   As we were both looking rather spiffy,  I suggested we do a quick detour to a parking lot in my hood and take a few photographs while there was still a bit of light. 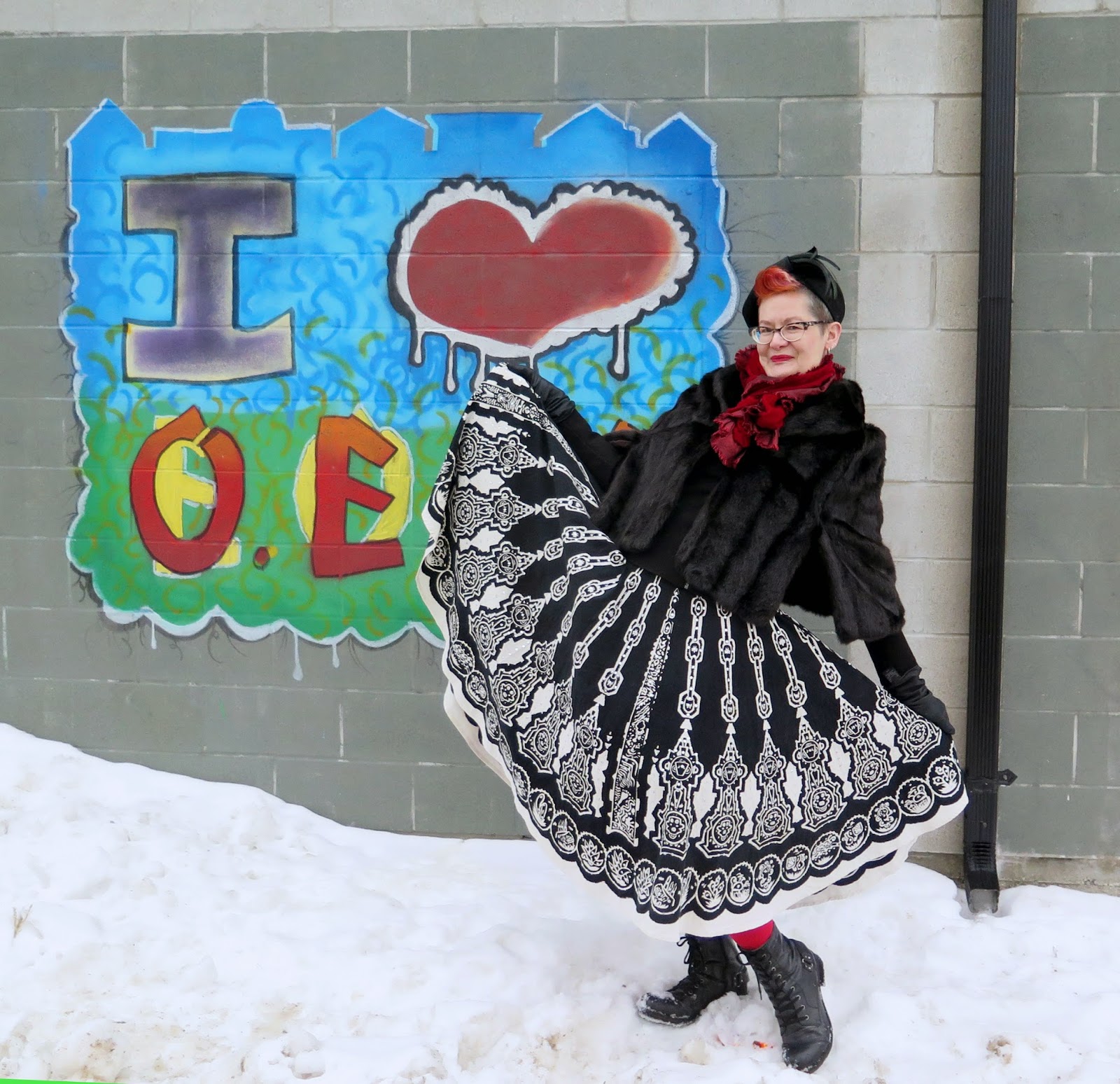 So there was a bit of this 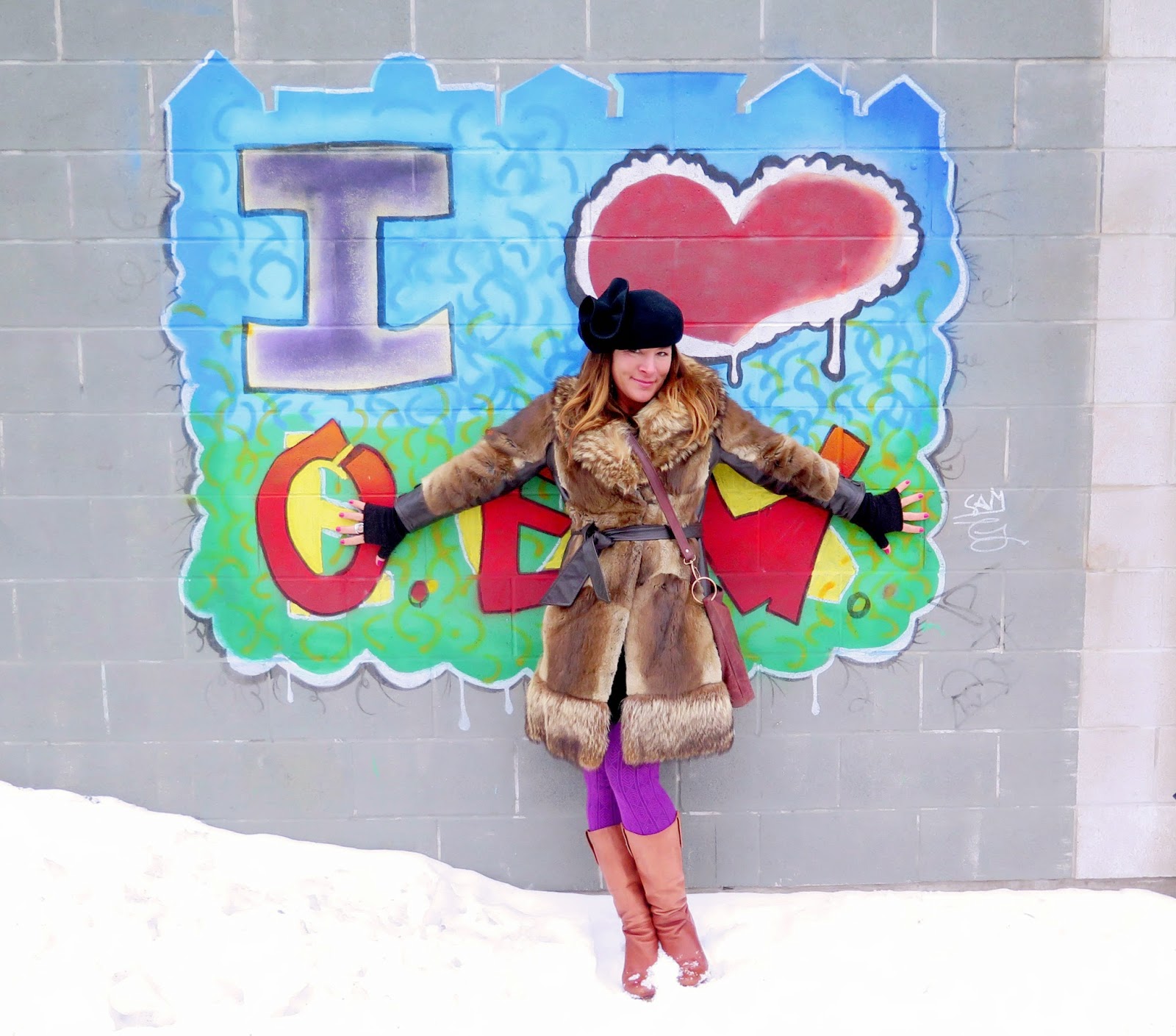 ....and then we headed off to a local pub for some wine and conversation. 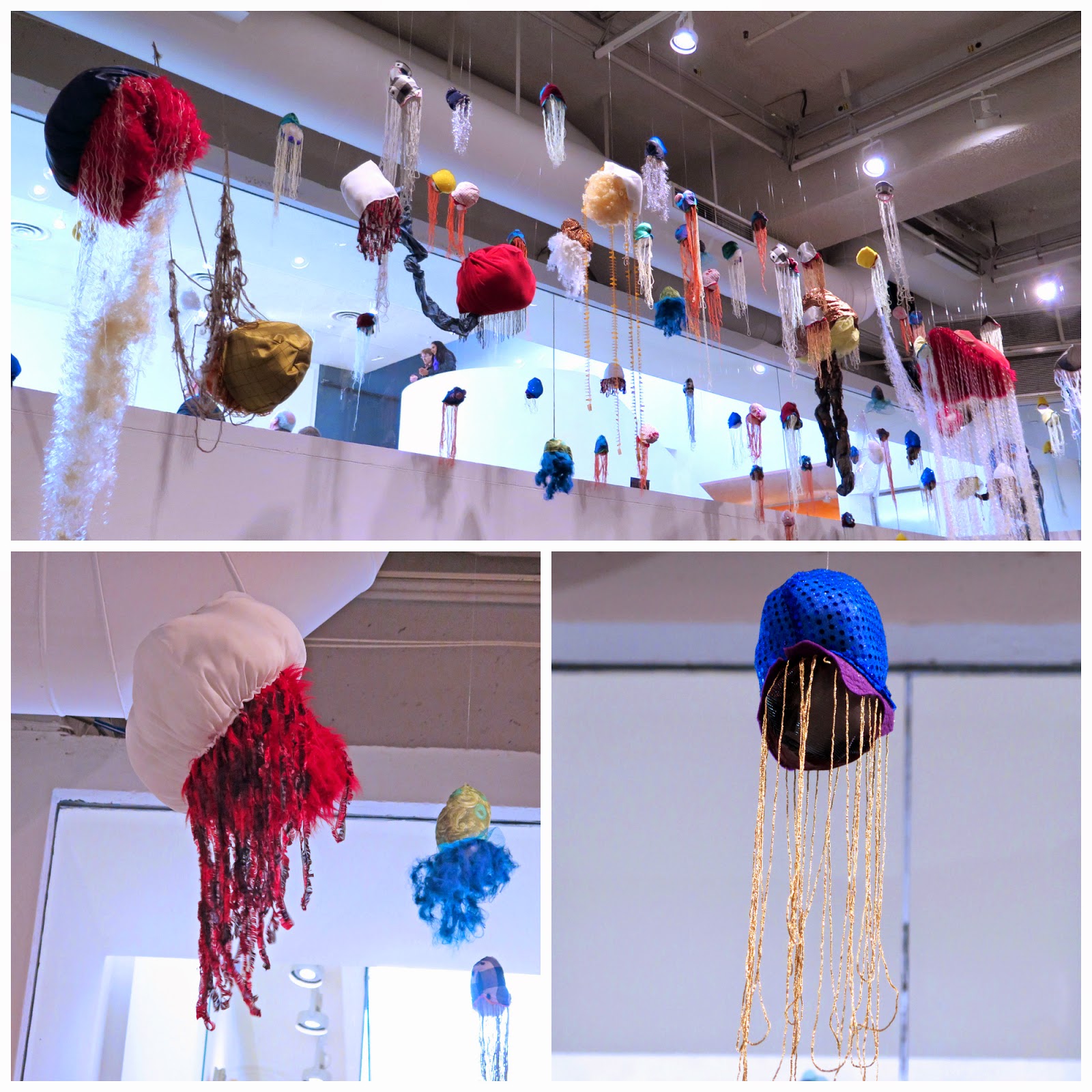 On Sunday I went to Museum London to see a film (more on that in a minute).  The film was tied in with one of their current exhibits titled "Nature's Handmade" (until April 15th), which features  works by contemporary Canadian artists who use a variety of materials and found objects to create non-traditional representations of nature.  My favourite piece in the exhibit is created by Conan Masterson, and titled "Sea Dab Jig".  The piece depicts a bloom (the term for a large number of jellyfish swarming together) of jellyfish made from fabric and yarn.


From the artist's statement:
"Jellyfish are like weeds.  Though brainless and boneless, these gelatinous
creatures are resilient, adaptable, and great at surviving.  Overfishing, climate
change, and pollution only fuel their spread.   In environmental hotspots across
the globe, certain species of jellyfish are now destroying other aquatic species,
and in absence of competition are quickly becoming the top predator of our waters.
Sea Dab is an old Newfoundland term for a variety of jellyfish.  The installation
Sea Dab Jig creates a bloom of fabricated jellyfish invading Museum London." 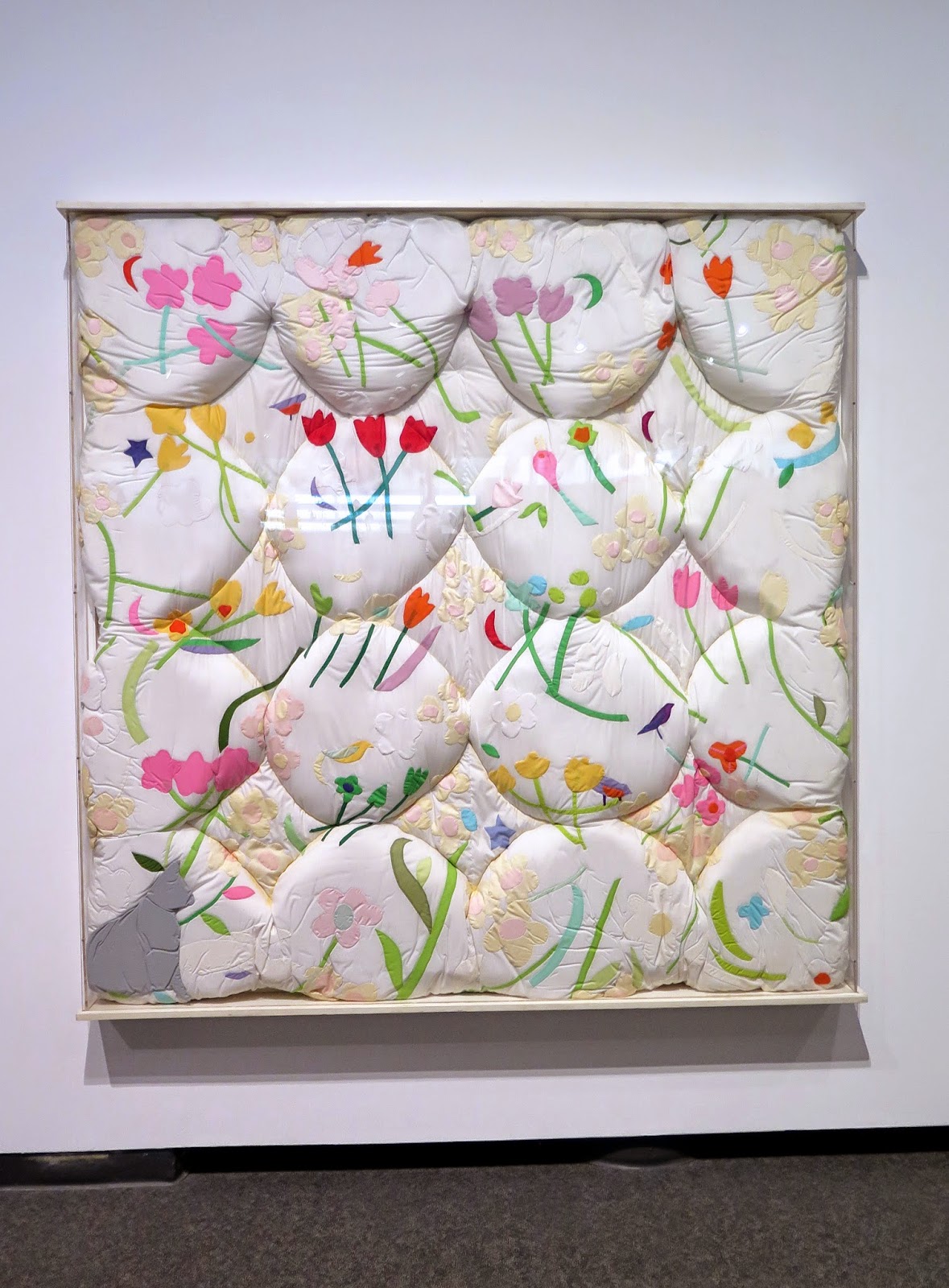 Some of the other pieces in the exhibit were quite striking, such as this large quilted garden by Joyce Wieland.  The piece is between seven and eight feet in height. 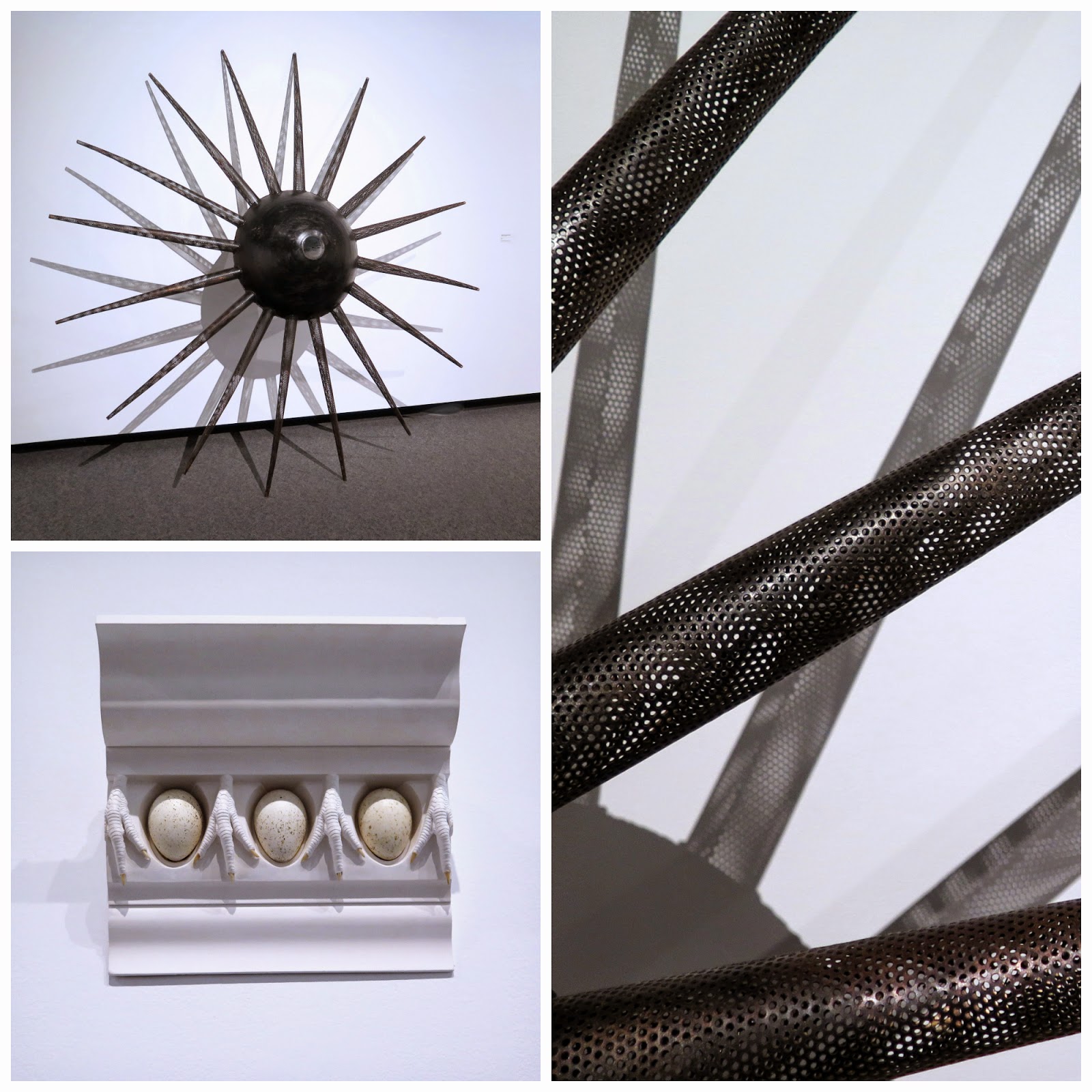 Clockwise from top left:  Another large piece entitled Plankton, created by Reinhard Reitzenstein from welded steel;  detail of Plankton;  Ovo and Claw Entablature (Fragment) by Spring Hurlbut.
I had gone to the gallery for a free showing of the 2013 documentary "Spring & Arnaud".  The film is an intelligent and intimate love story between two well-respected Canadian artists, Spring Hurlbut and Arnaud Maggs.  I remembered meeting Hurlbut here in London in the early 1980's, which sparked my interest in seeing the film.  The couple met when Hurlbut was 35 and Maggs was 60, and they were together for 25 years until Magg's death in 2012.   The filmmakers follow the couple at their cottage in France and their home and studios in Toronto as they discuss their relationship and respective art practices during the last year and a half of Magg's life.  The film is beautifully shot, and received very good press when it debuted at the Toronto Hot Docs Festival in 2013.    It was unfortunate only about a half dozen people came to see it this weekend.  You can watch the trailer below.

And now, back to work!