If you have been following my blog for a while, you may remember seeing Maureen Riley and/or her artwork in a couple of posts (here, and here) over the years.  I've known Maureen for somewhere between 15 and 20 years, and have no recollection of how we met, but suffice it to say that we immediately sensed a kindred spirit in each other.  She is a warm, kindhearted person, with a delightful sense of humour, and has been a full-time working artist for the last 30 years.  I have always loved her work, which focusses on the lives of women - her richly-coloured paintings feature scenes of women reading, dancing, or drinking cocktails together.  Many pieces of her work have been a tribute to Mexican artist Frida Kahlo who has been a great inspiration for her. 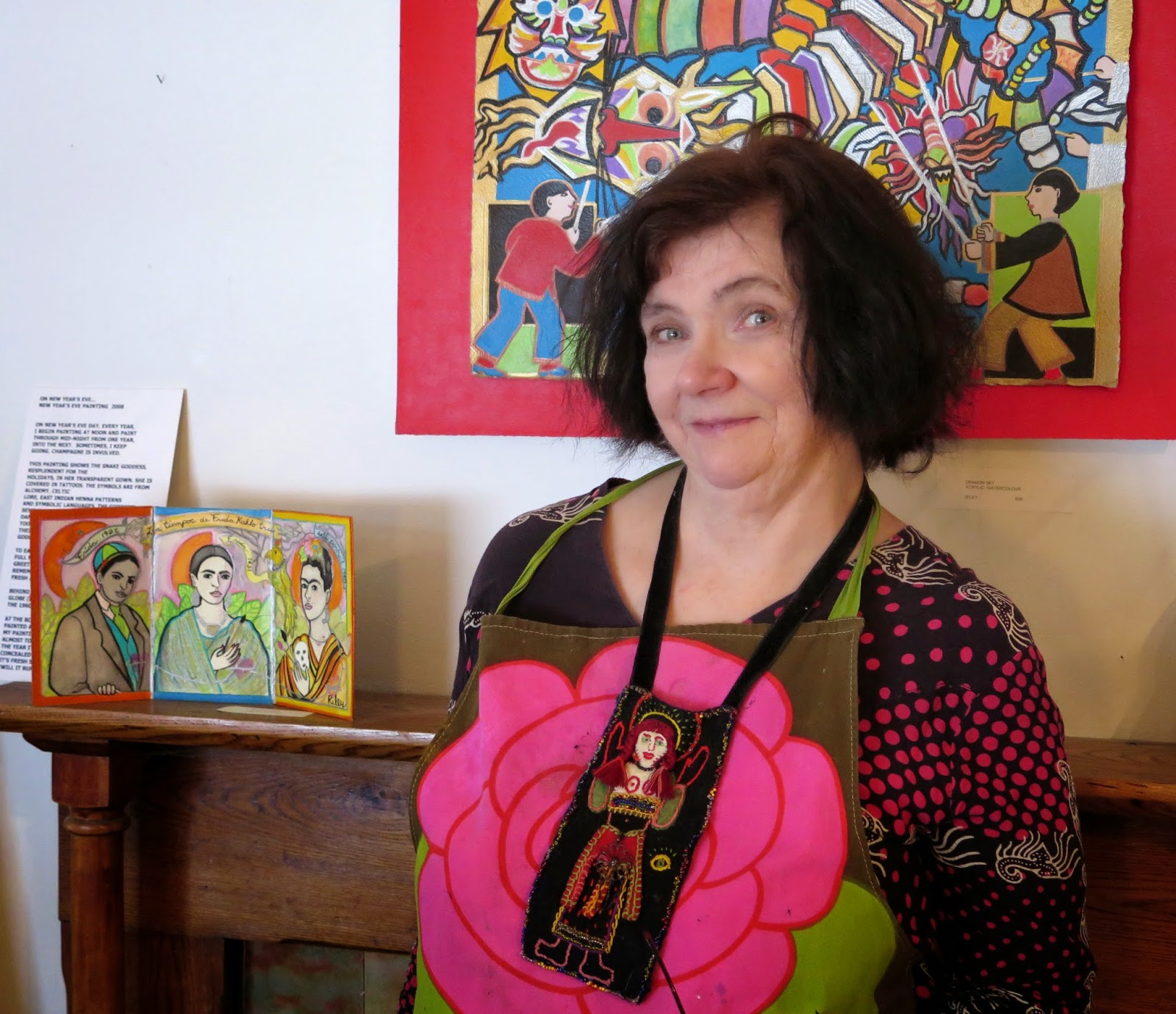 Riley and two of her works - the triptych on the mantel depicts Frida Kahlo at three different times in her life. 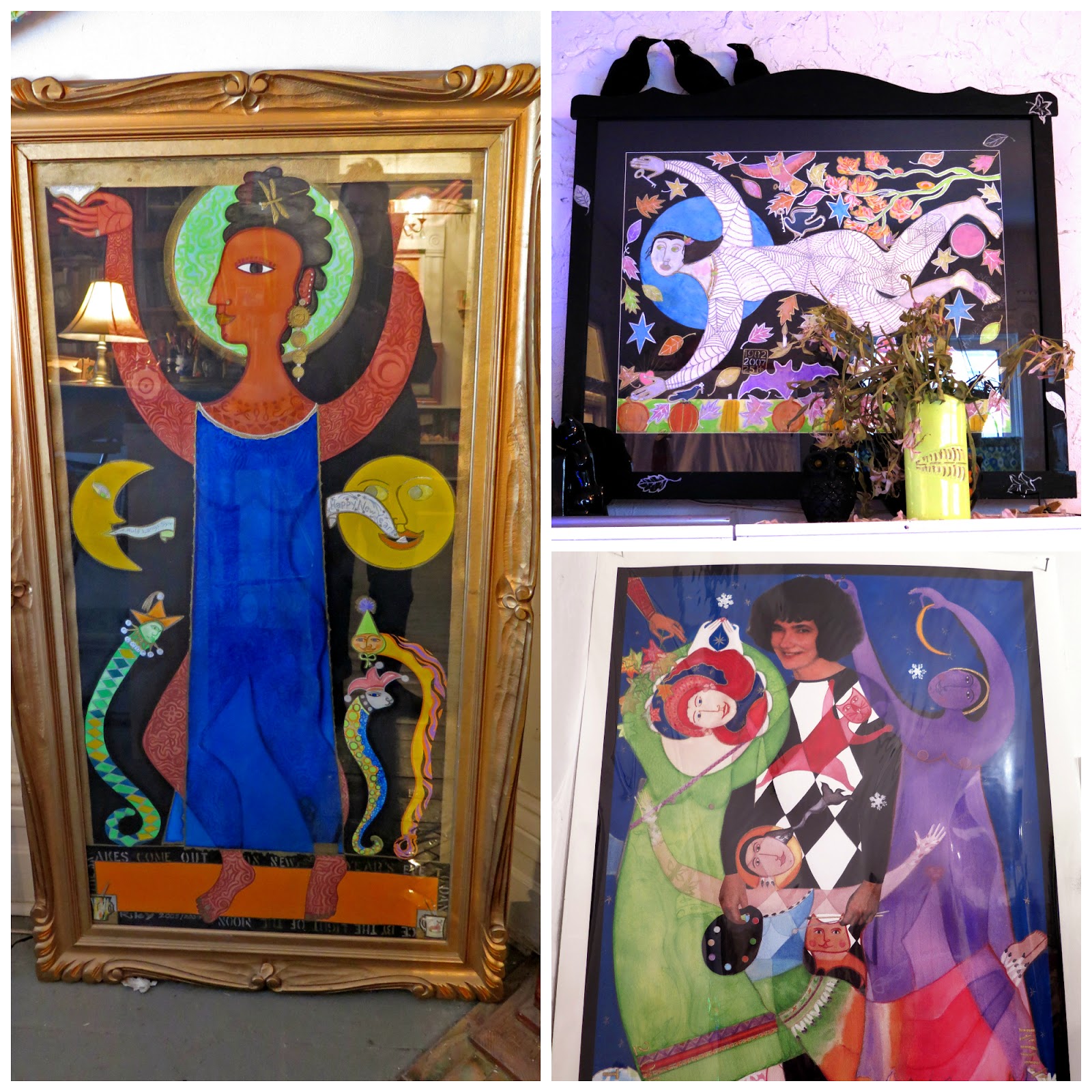 I love visiting Maureen in her art-filled home - jewel-like colours glow on every wall, goddesses and angels radiate with benevolence and wisdom.  The bottom right painting, titled "The Artist and Friends Pose for The Millenium" features a young Riley. 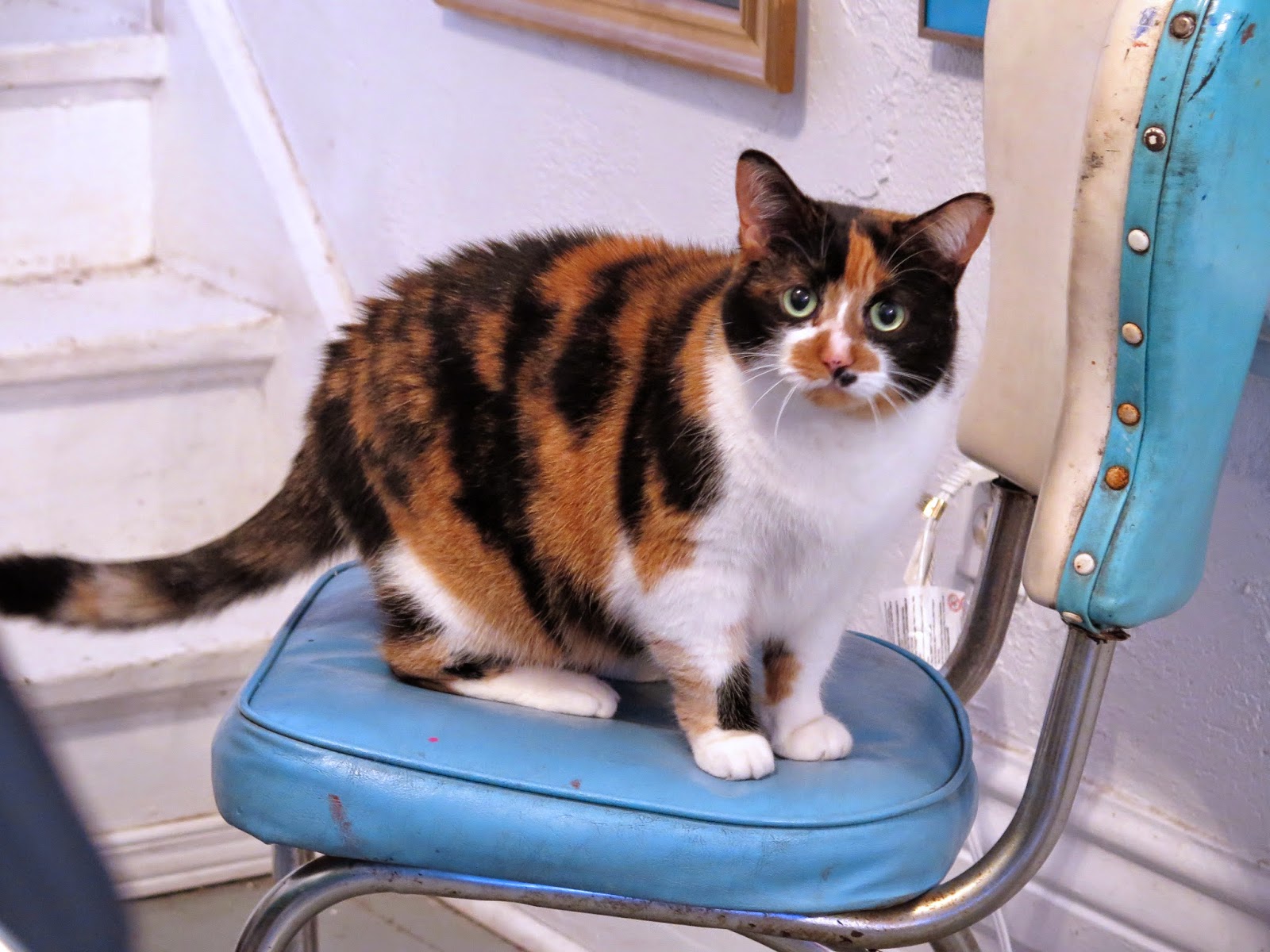 One of Riley's three cats may come up and say hello - this adorable calico is Queenie, who, on my most recent visit decided that I was worthy of petting her. 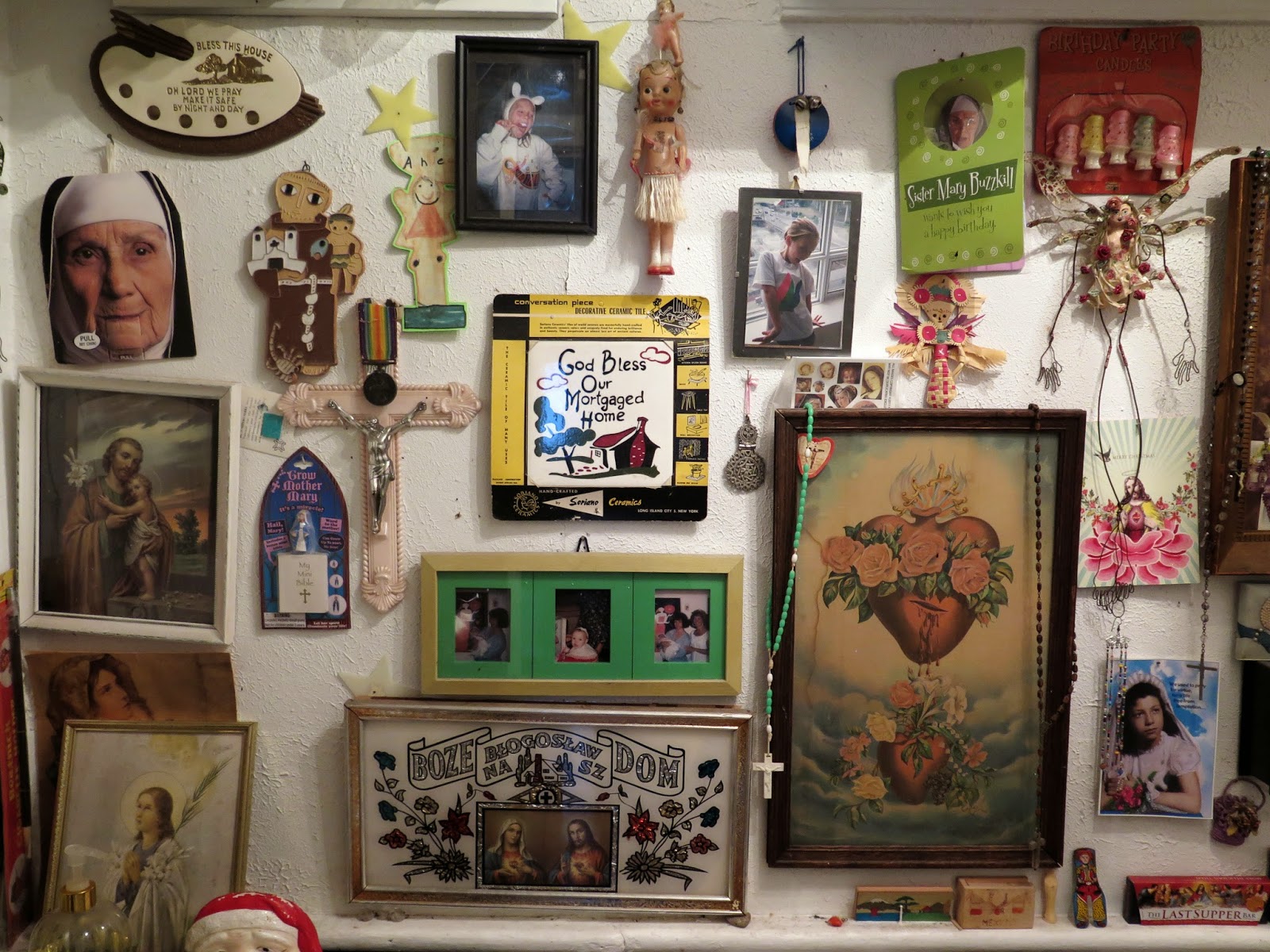 Riley has the most entertaining bathroom filled with kitschy religious iconography, photos of her beloved niece and some quirky dolls.

Now I'm going to do something I've never done before on this blog - I'm going to ask you, the reader, for money.  I'm asking you to support Riley's crowd-funded project, titled Kite Dream.   What is Kite Dream?  It is a graphic novel about Riley's life in the years since 1991, when she was diagnosed with Dystonia, a neurological movement disorder.  In the years following, her sister died after being infected with tainted blood, Riley unexpectedly found herself in the role of a parent in her 40's, and through it all she continued to produce her art. 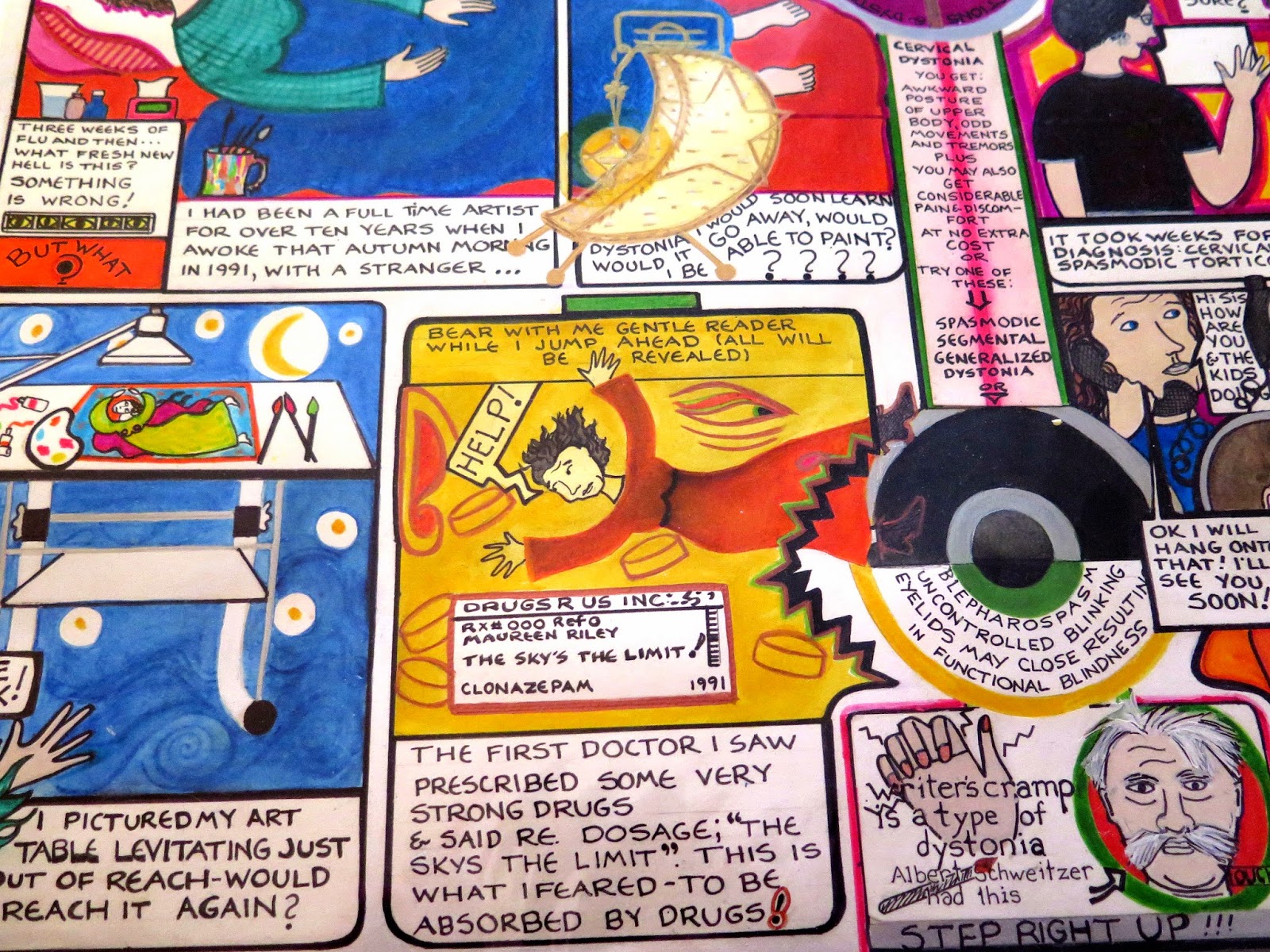 A detail of the first page of the graphic novel that Riley is hoping to finish in a year if her crowdfunding campaign is successful.

The goal of her Indiegogo campaign is $10,000, which would allow Riley to devote a full year to work exclusively on the graphic novel.   If that goal isn't met, Riley still gets to keep whatever amount is raised, but Indiegogo keeps 9% of the funds received, instead of the 4% taken if the full $10,000 is raised.  There are 23 days left in the campaign, and so far almost $3,800 has been donated.  If all of you who have enjoyed reading my blog each donated $5 to the campaign,  we could probably get it over the $5,000 mark.

It is through the telling of stories that we form connections with others, and we come to understand ourselves.  Riley has decided that it was the right time for her to tell her story.  Please watch the short video below that I made where Riley discusses Kite Dream and how dystonia has impacted her life.

Here's the link to the Kite Dream page on Indiegogo.  If you believe in the importance of sharing our stories, and are able to spare $5, please support the campaign.