Wasn't That a Party?


This past Saturday night, the owners of From Mars, whom I have known since the mid-1980's, had their annual Christmas party at their store.  Last year they asked Catl, a high-energy blues rock band from Toronto, to play at the party, and the response was so positive that they asked them back again this year.  I asked Heather to go with me and we stopped by the Early Bird beforehand to get a bite to eat..... 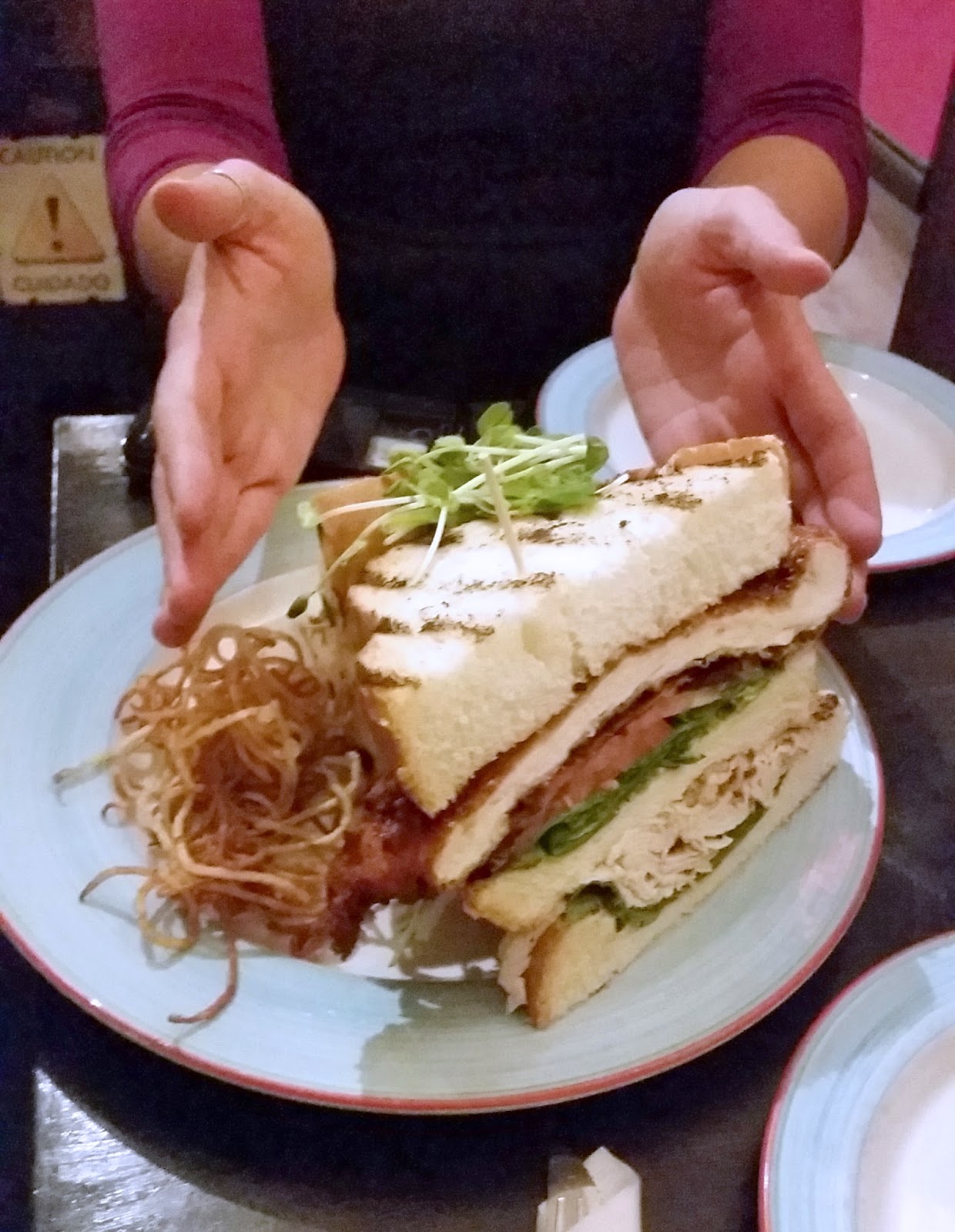 I had always wanted to try the "Turducken" sandwich (basically a giant club sandwich with smoked turkey, panko-breaded chicken and duck bacon) but I had to wait until I could split it with someone, and Heather was game.  The verdict?  I could have done with less bread and more of the maple mayo, but the insides were tasty.  We had onion rings on the side, just because.

Fully fortified, we headed a couple of doors down the street to the party. 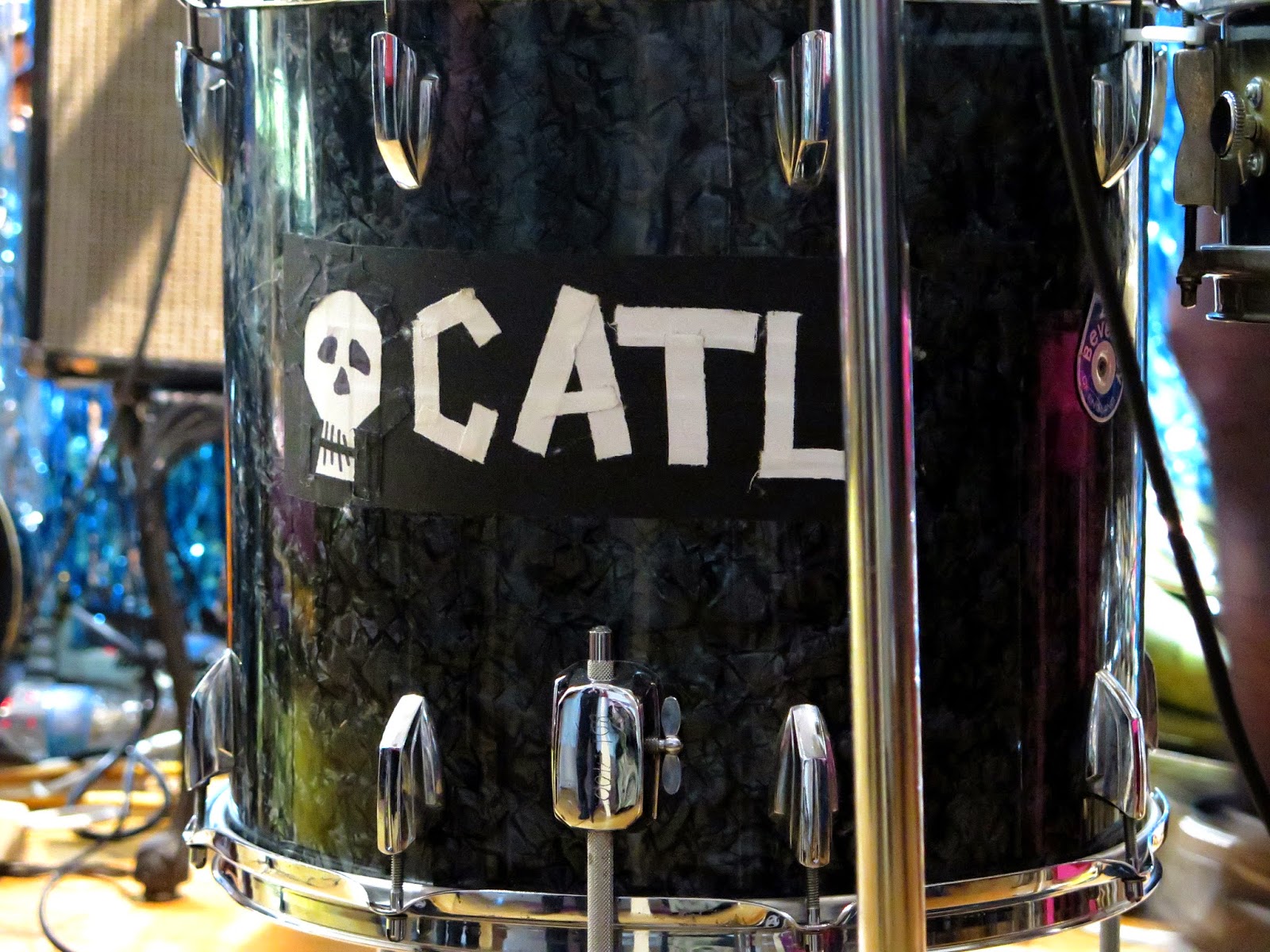 While the band was setting up, guest enjoyed snacks and a beverage, and shopped the store's stellar selection of unique clothing and accessories.  The store has become a favourite of many stylish 40+ women in London because of the great selection of funky clothes that look good on a variety of ages and body types, and the fabulous shoes and boots by such brands as Fly, Neosens, and A.S. 98 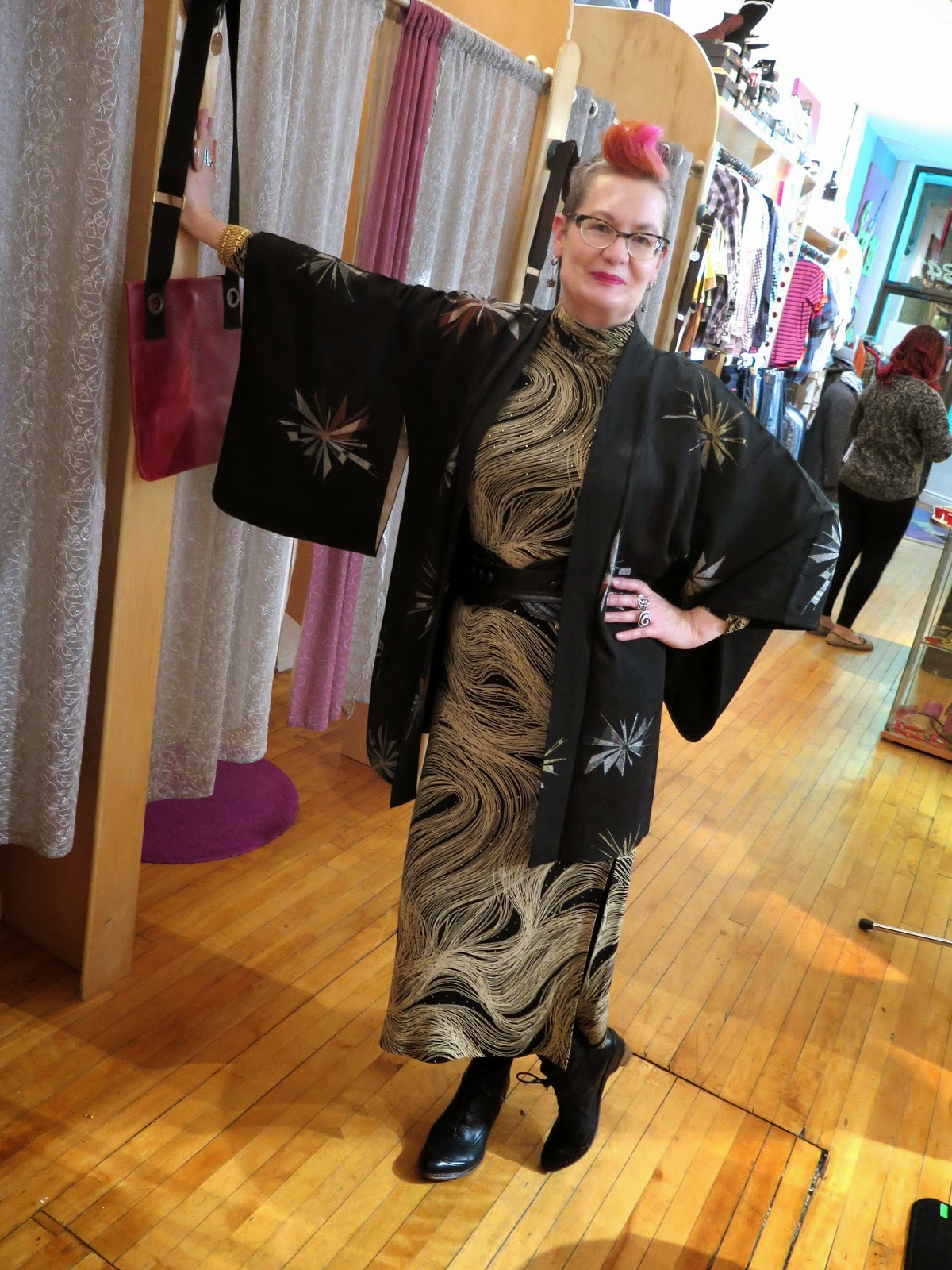 I have more than a few items from the store in my closet, but decided that I would go vintage for the party.  I'd found this 70's maxi dress at Jackpot Vintage recently (you can't see in this photo, but it has tiny gold metal studs throughout the pattern) and it went perfectly with the metallic-embellished haori I purchased in New York.  I did wear the pair of Neosens ankle boots I'd purchased at From Mars a few years ago. 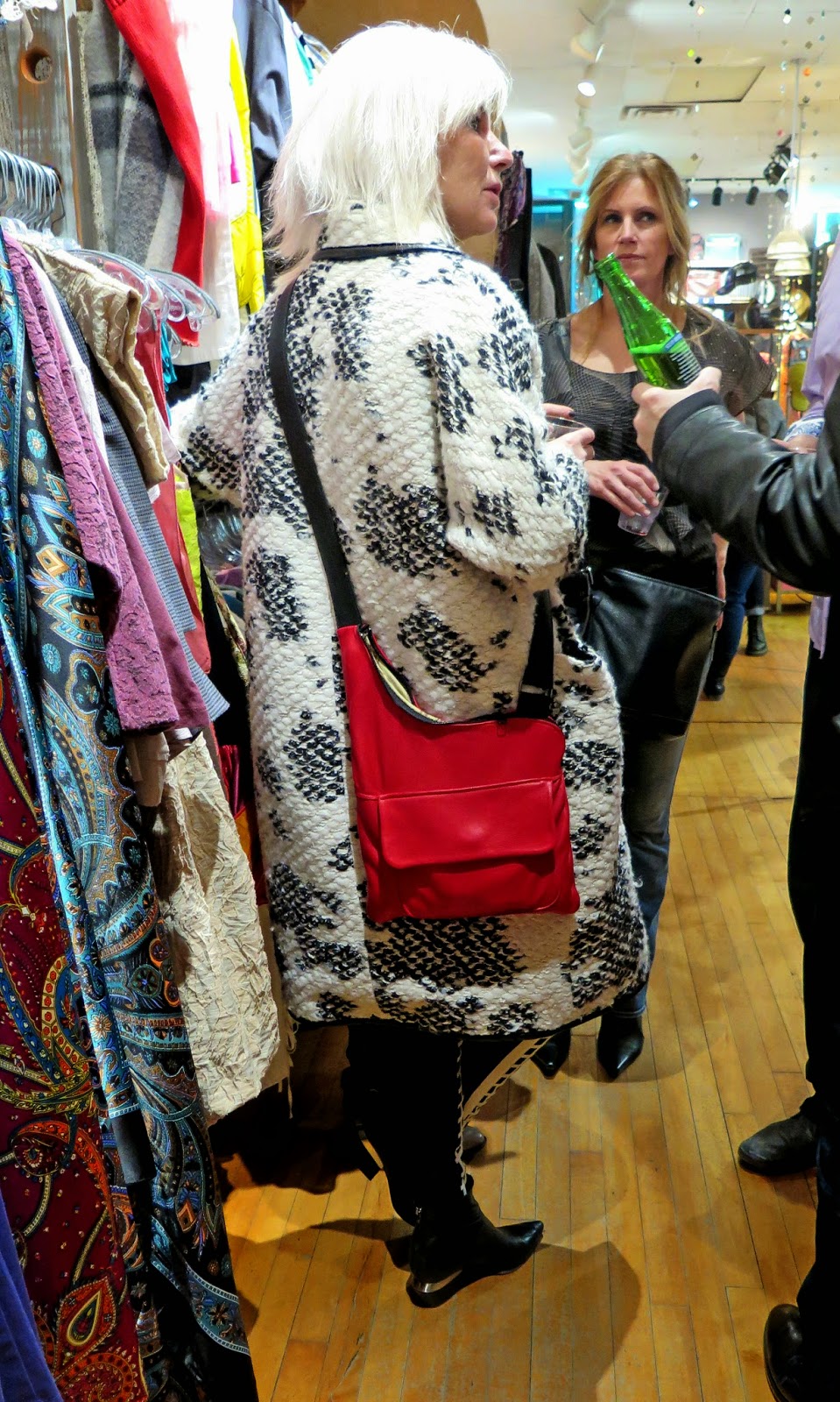 I've seen this woman at a few different events and as usual, she was beautifully turned out, from her striking hair to her metal-accented boots. 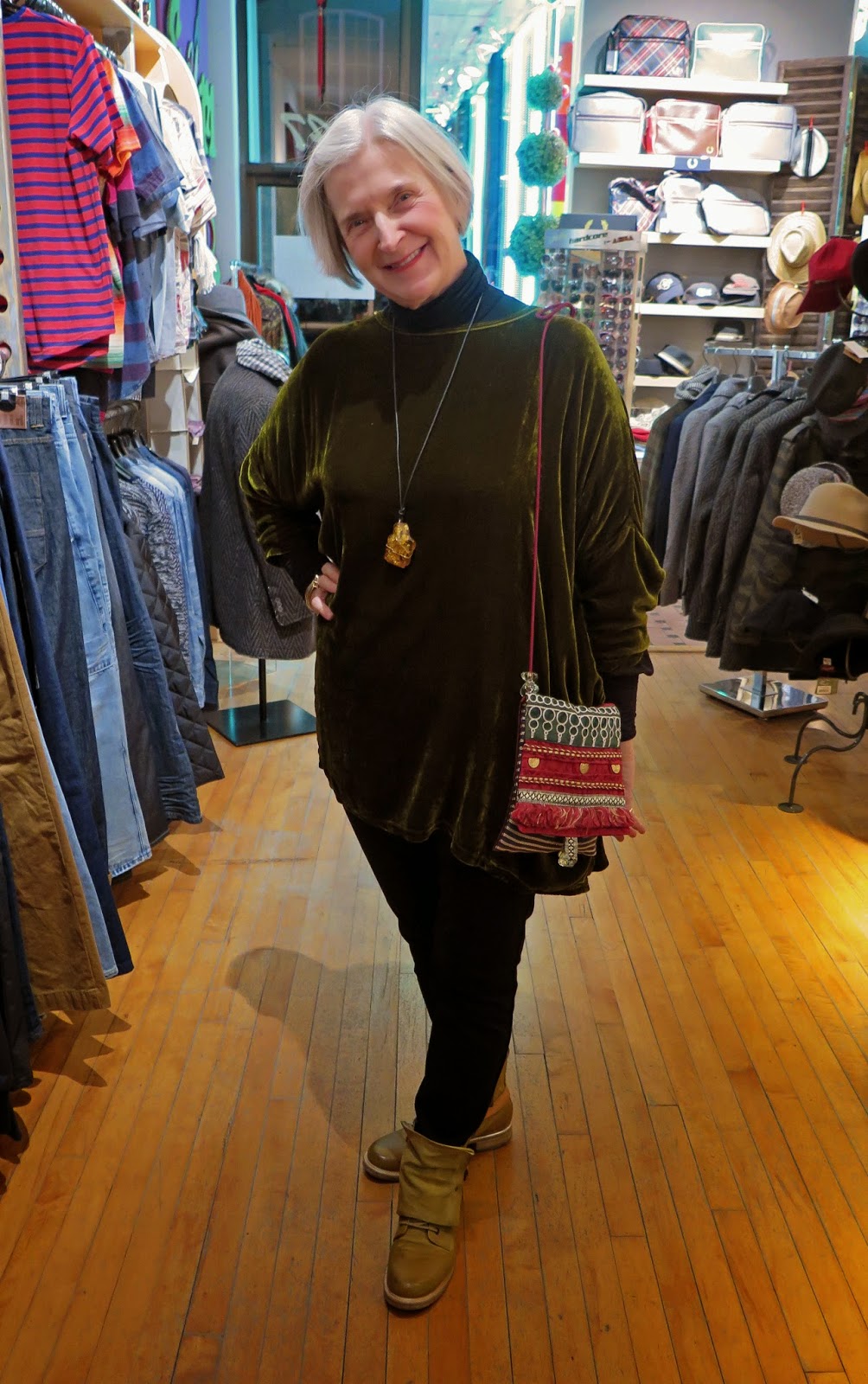 This woman has the same pair of A.S. 98 boots that Heather had purchased last month, and it illustrated the appeal of the store to women of all ages when a pair of boots purchased there look just as cool on a woman in her 60's (I'm guessing) as they do on a woman in her 30's. 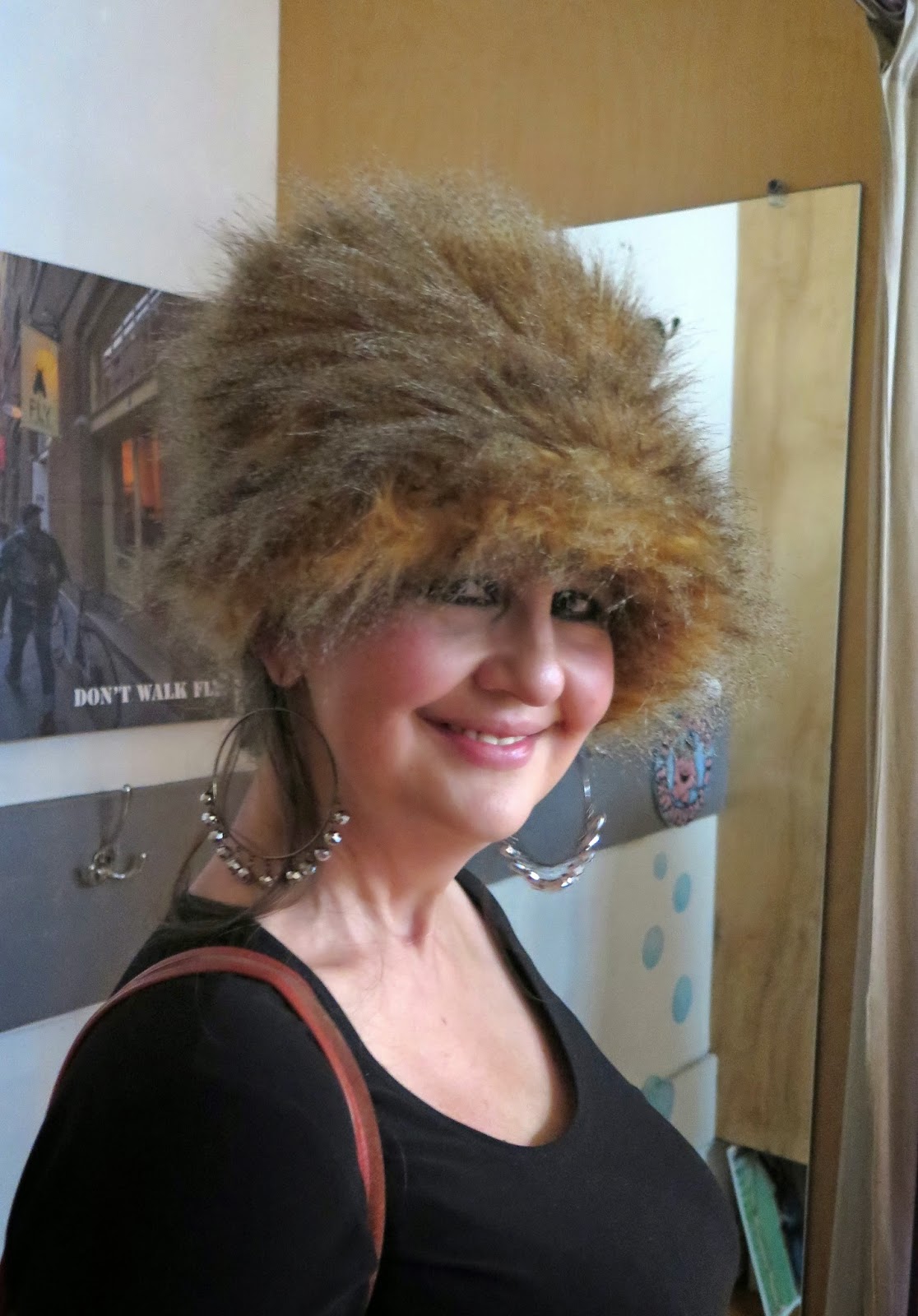 My neighbour, Natalie, looking super sassy in a furry chapeau and giant hoops 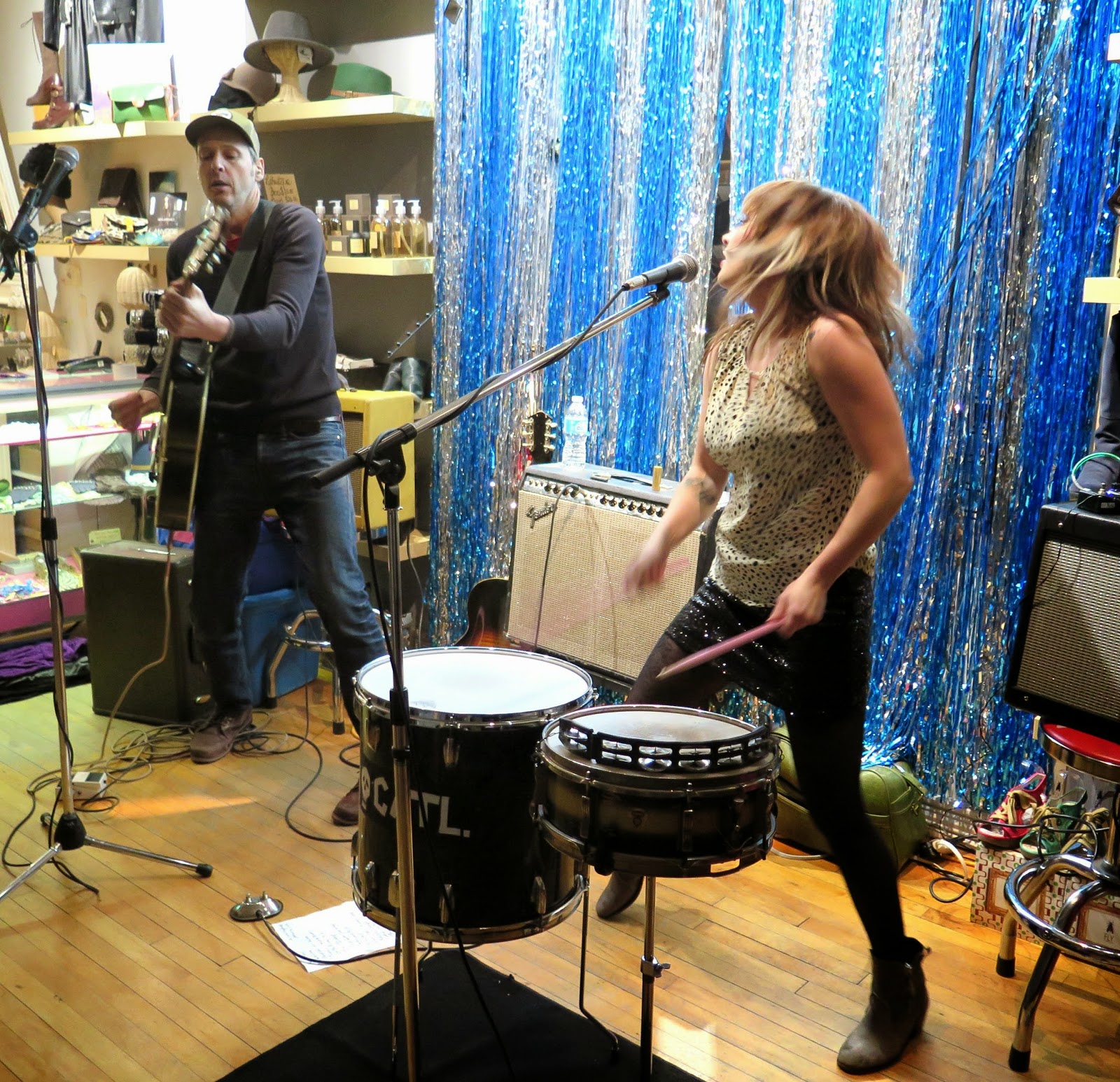 Catl, formerly a duo, then a trio, now a duo again, consists of Jamie Fleming on vocals and guitar, and Sarah Kirkpatrick on drums and vocals.  They play stripped-down, rip-roaring, booty-shakin' blues rock, and it is impossible to stand still while listening to them play.   While they have four albums under their belt, it's their live shows that have earned them a devoted following. 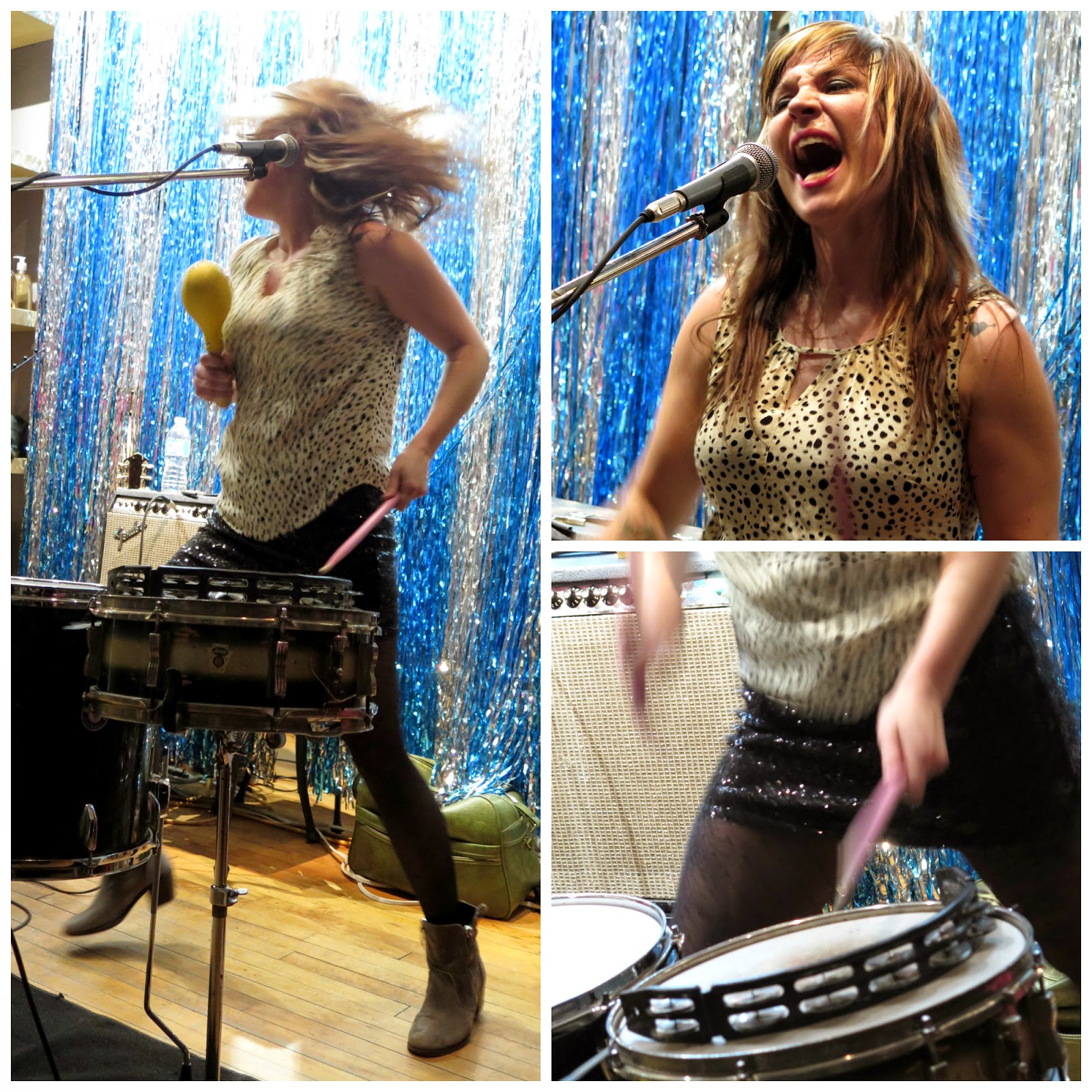 Kirkpatrick, whose father was a drummer, started playing drums after the band lost its second drummer sometime in 2013.  She is a dynamo on the skins, and never stops shimmying and shaking. 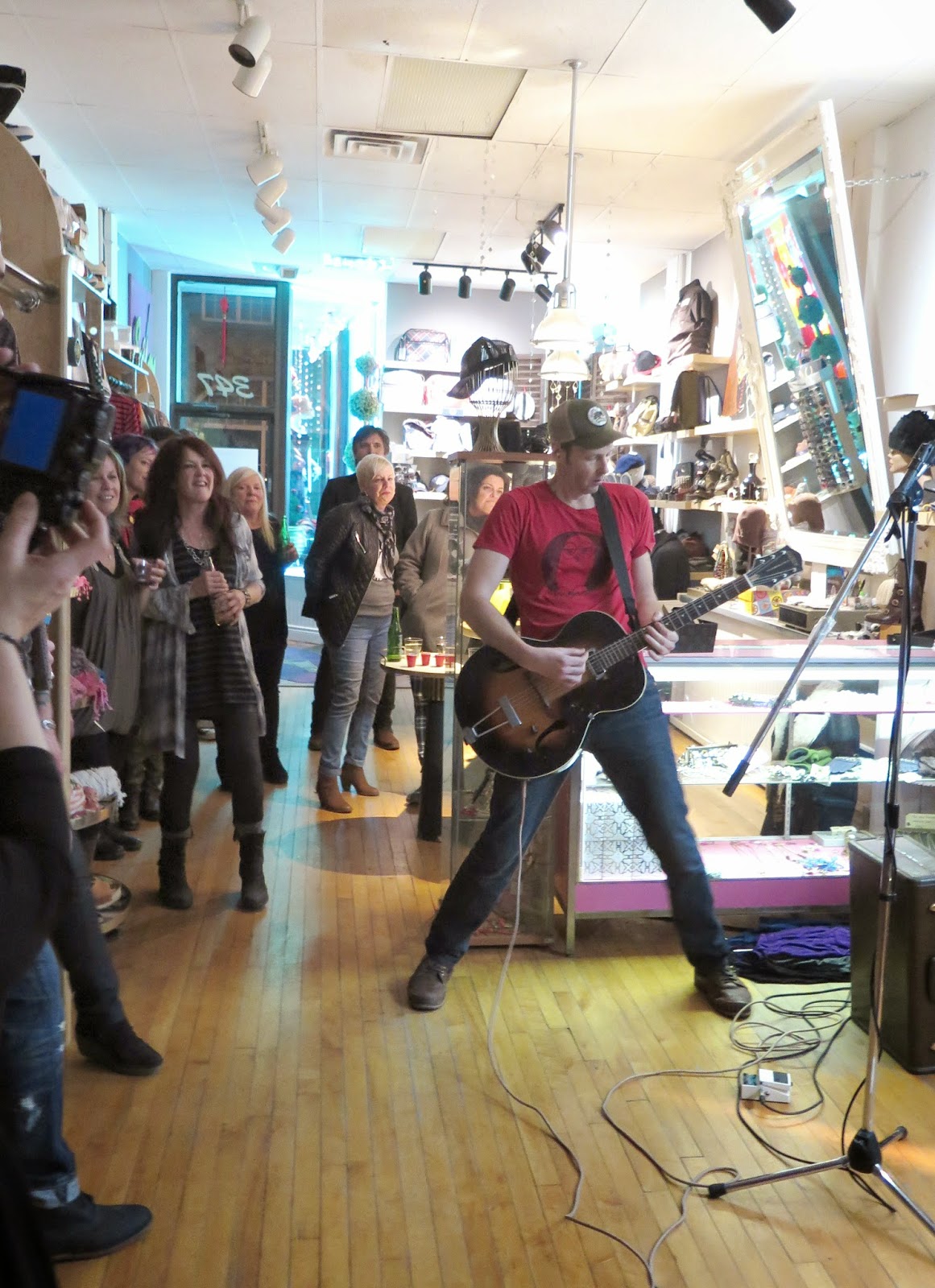 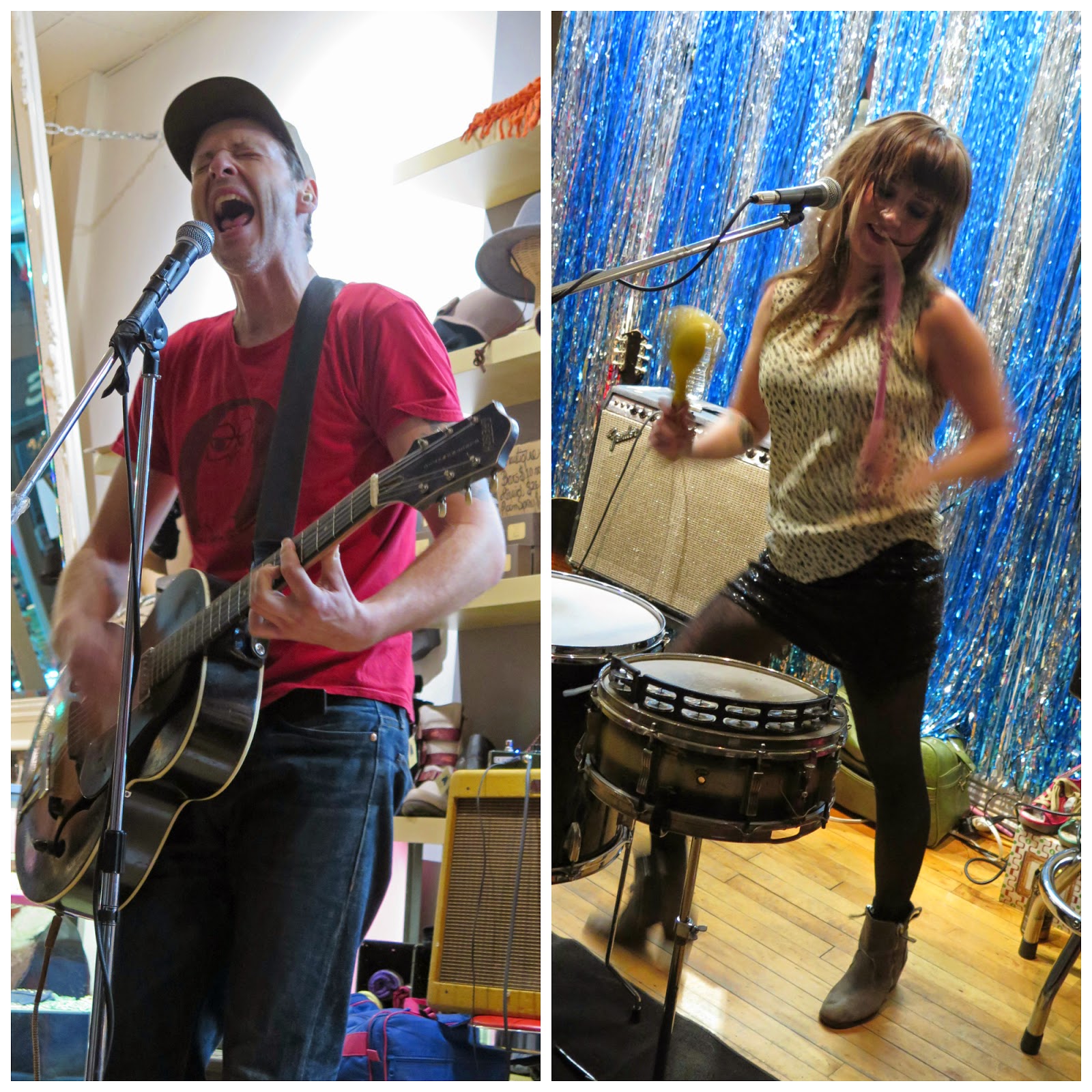 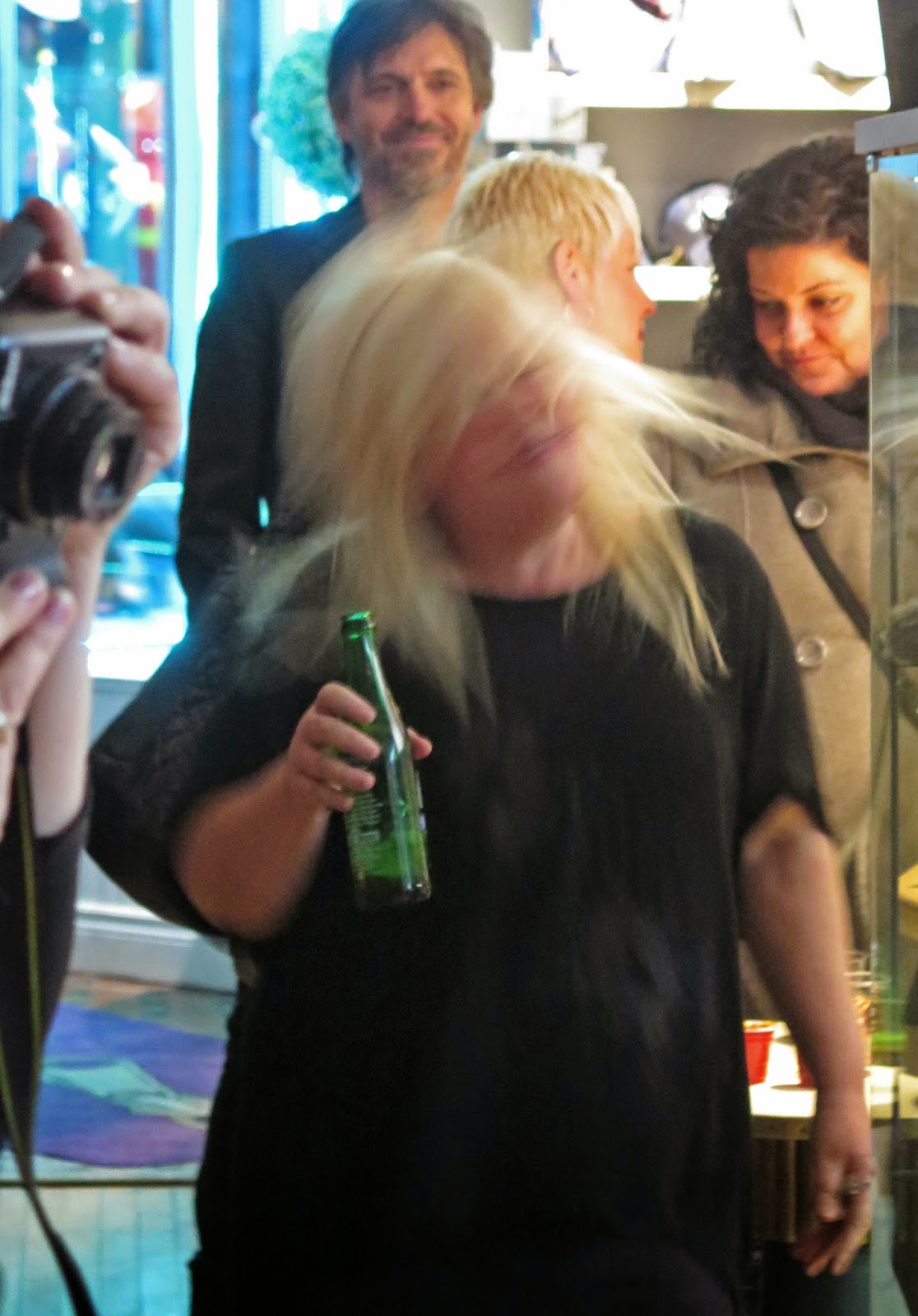 Kirkpatrick wasn't the only one doing some serious hair tossing that night - Laurie, one of the co-owners of From Mars, was definitely getting into the groove. 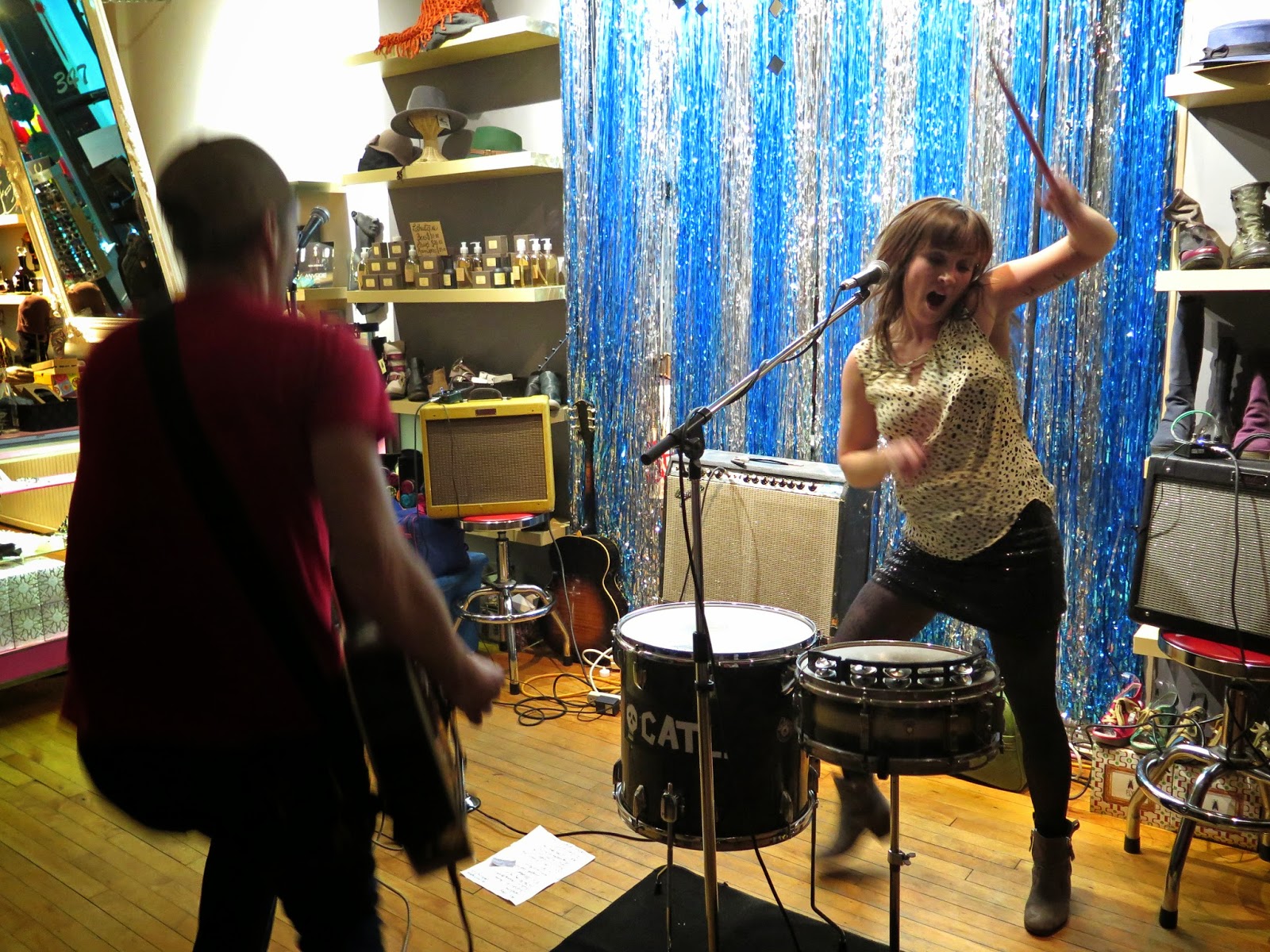 The energy of Fleming and Kirkpatrick was amazing, and by 10 pm when they called it quits, I'm sure they were exhausted.

You can watch Catl perform their first song of the night in the video I shot below....