I hadn't been to a Roller Derby game here in London for several months, so when I found out that my new favourite band was going to be playing the half-time show at a Derby double header on December 13th, of course, I had to be there.  The first game featured the Forest City Derby Guys team, the Pack Men, against Ottawa's Slaughter Squad.  I hadn't seen the men's team play since watching their very first London game almost exactly a year ago. 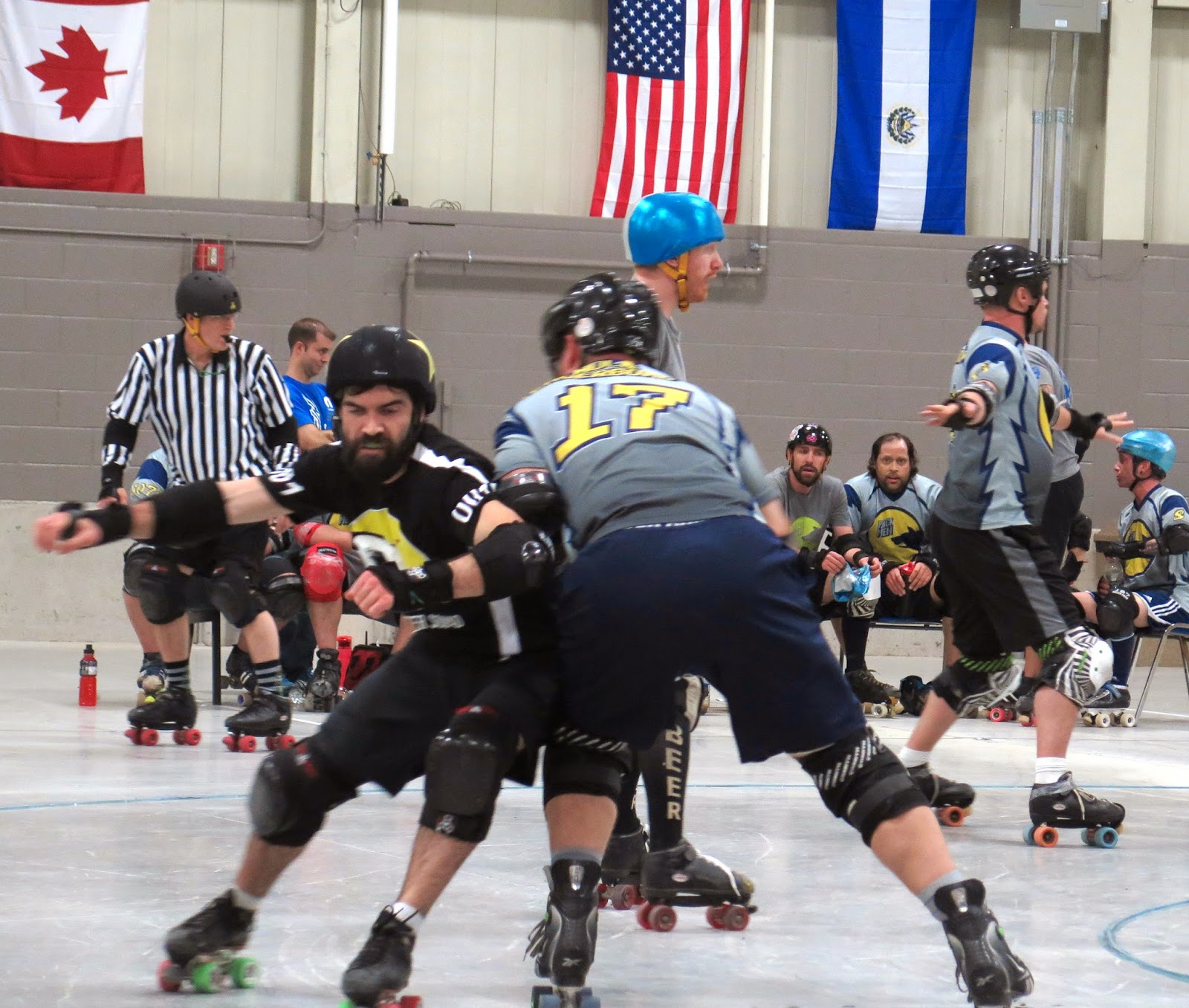 They still play pretty rough, but they are definitely tighter as a team, and are relying more on strategy and skating skills than brute strength.  The major improvement I noticed was that there were a lot fewer penalties.  Last year, the "penalty box" was full 80% of the time, so nice going guys! 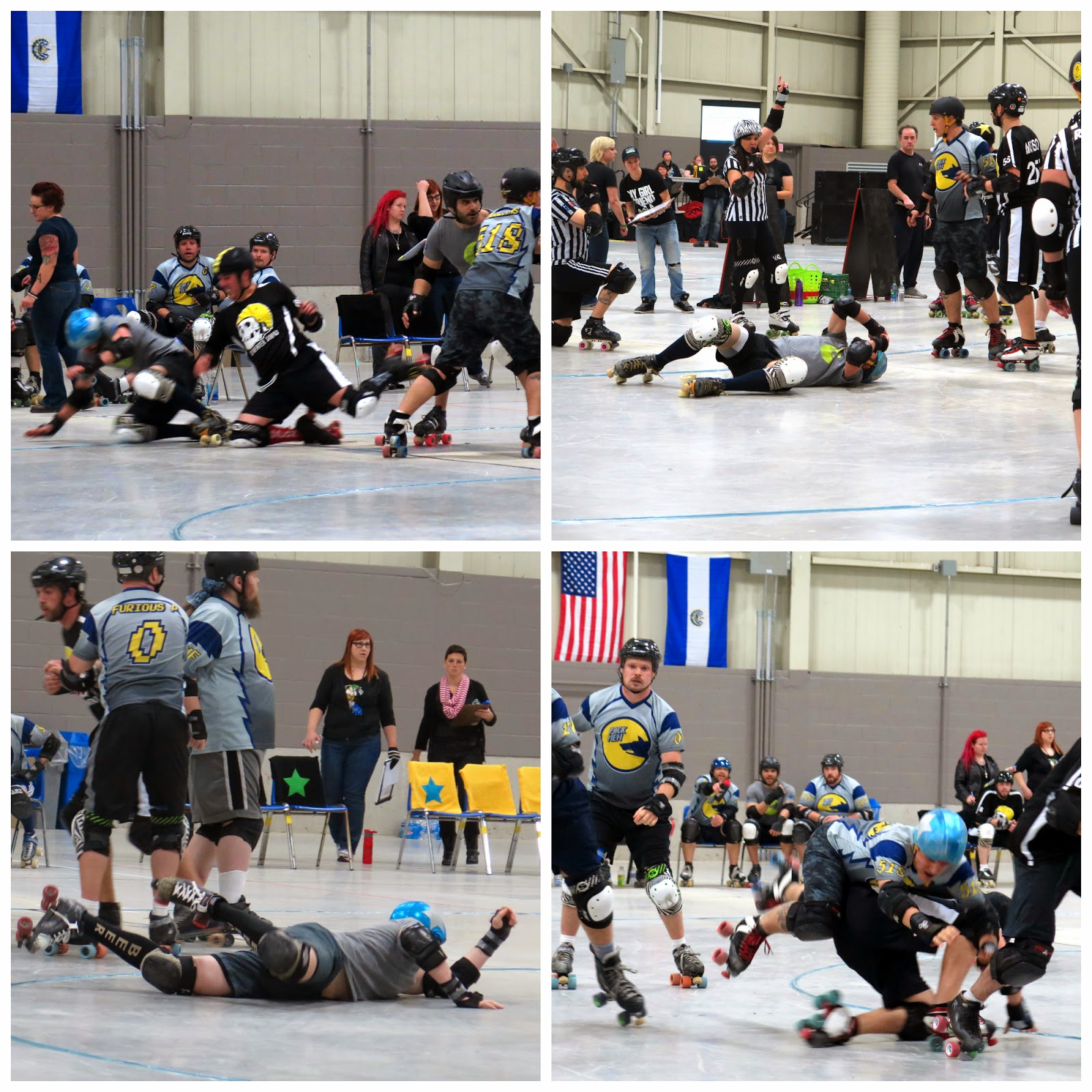 Of course, that being said, there was still a lot of this....with one of the London team members having to be helped off the track. 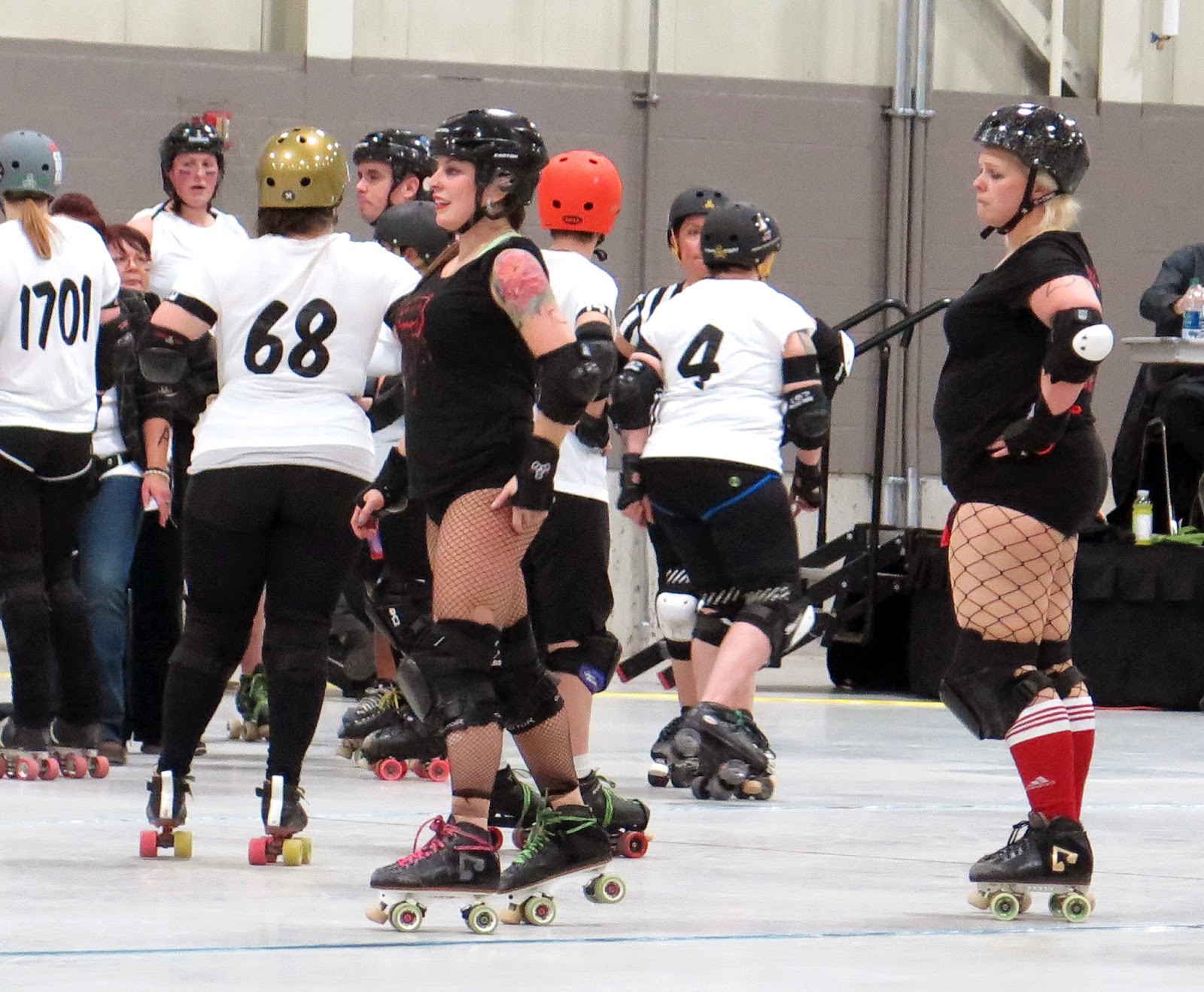 The second game of the night featured two teams composed of members of the Forest City Derby Girls. The Original Gangstas featured founding members of the FCDG, some of whom had come out of retirement, or travelled from other cities in order to play that evening, went up against newer members of the league, calling themselves The Young and the Wreckless.    The outfits worn by the two teams reflected the difference between the old school (all black) and the new school (black and white) in women's roller derby.  When I first started attending games several years ago, it was common to see the women play wearing fishnets and booty shorts, which I'm sure was part of the draw for some fans.  Now, the women tend to cover up more during matches, which makes for somewhat more protection against bruises from falls on the track. 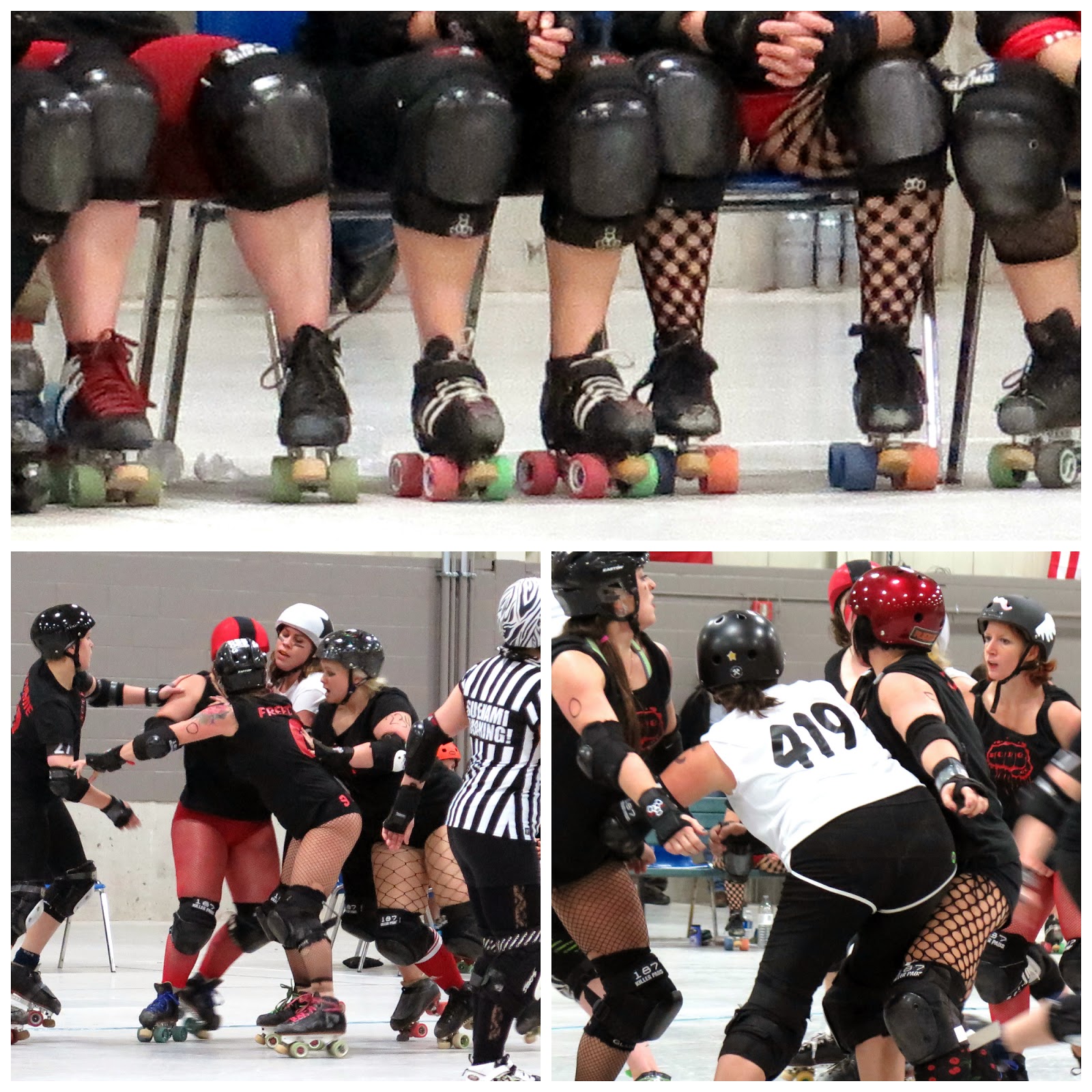 Scenes from the track.... 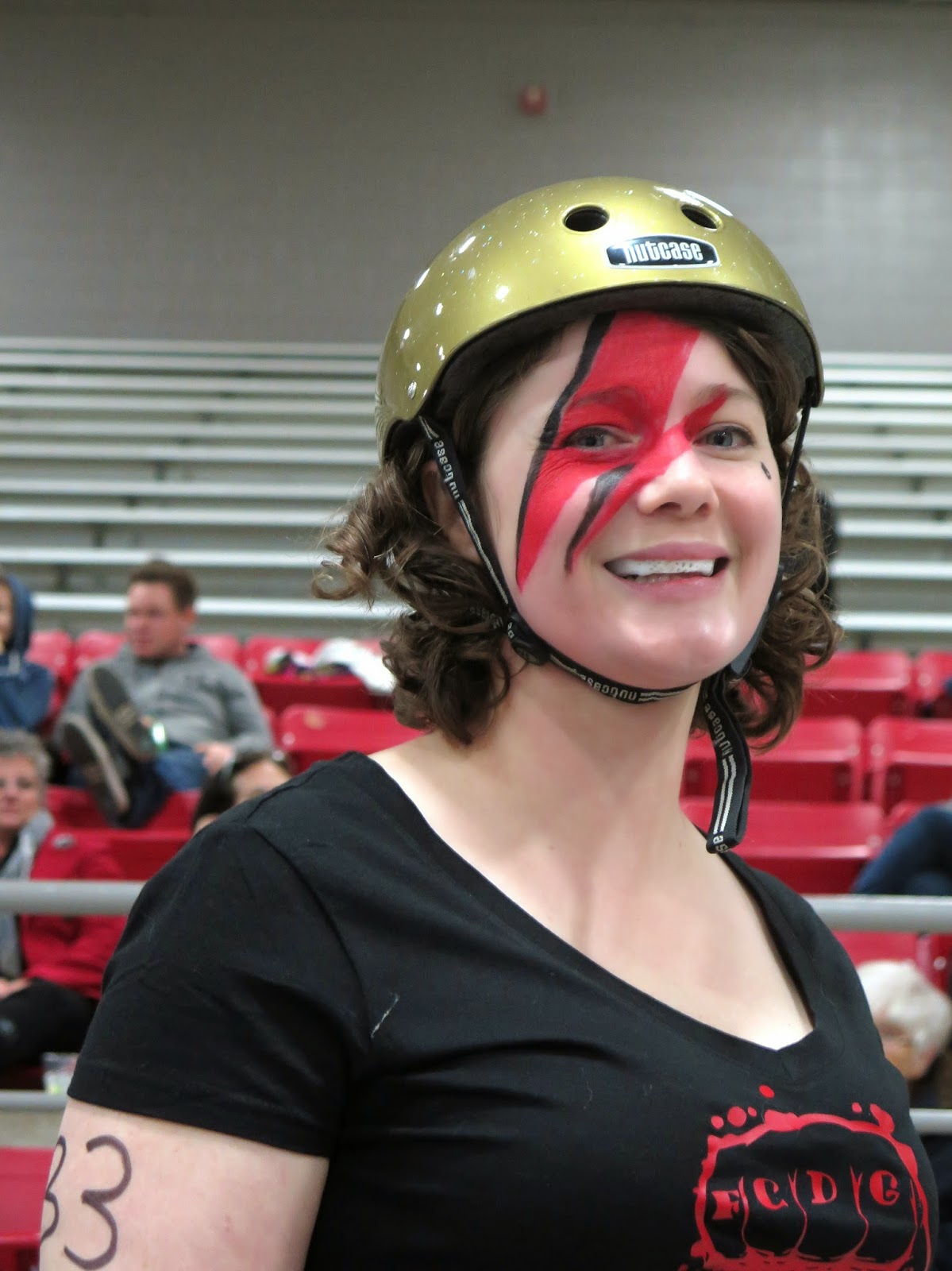 Glamarchist, who was playing for the Original Gangstas, sported her trademark lightning bolt 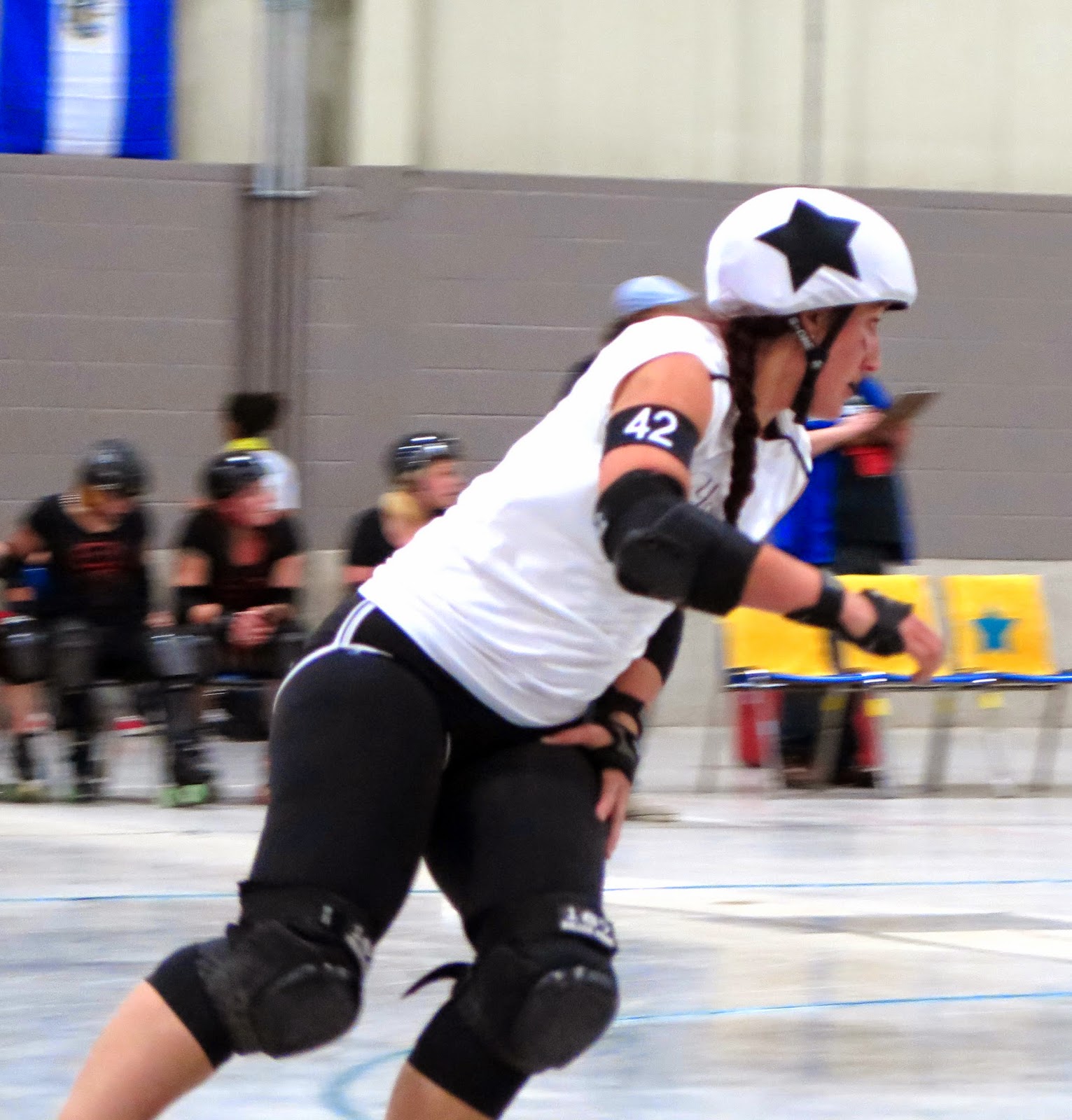 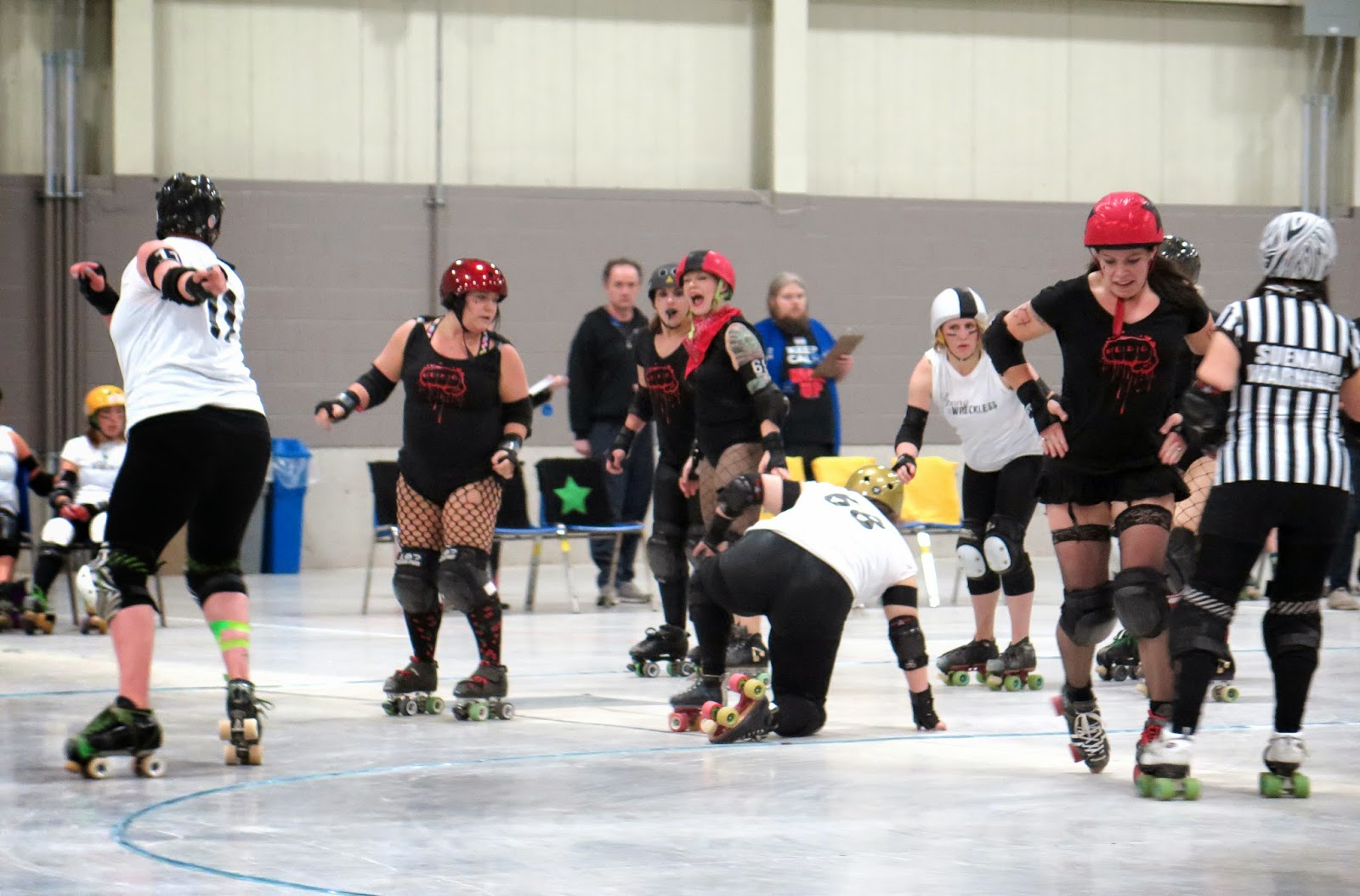 In the end, the Original Gangstas triumphed but both teams played well, and it was great to see some of the women who have gone on to play for other leagues (such as Killson, in the thigh-highs and garters on the right) back on home territory. 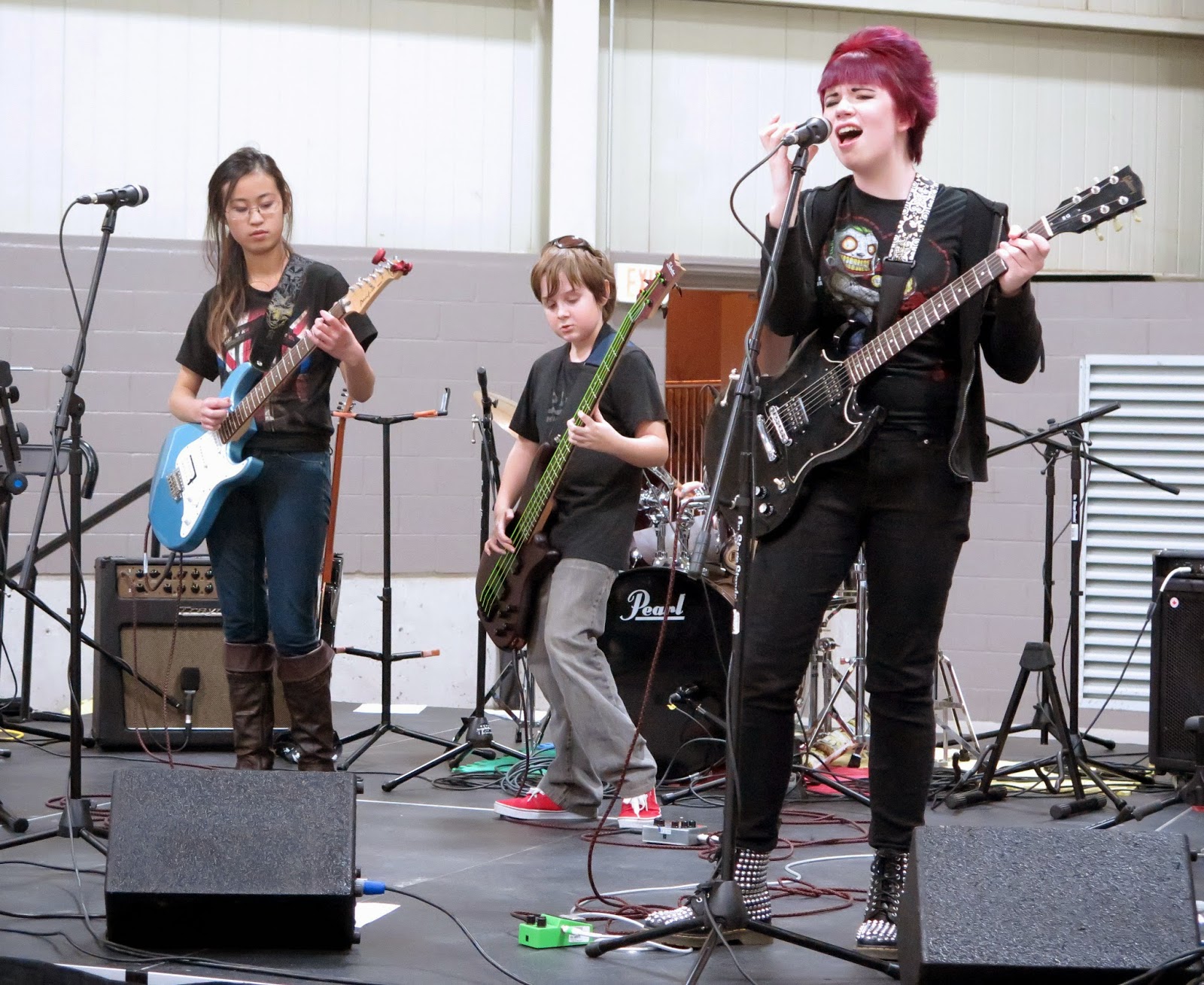 Populusque Romanus played a half-time set that consisted of Blitzrieg Bop (the Ramones), Why'd You Only Call Me When You're High (Arctic Monkeys), Come As You Are (Nirvana), Kashmir (Led Zeppelin) and Rebel Rebel (David Bowie).  The band had acquired a new member since I last saw them play in Woodstock (Connor, shown here playing bass). 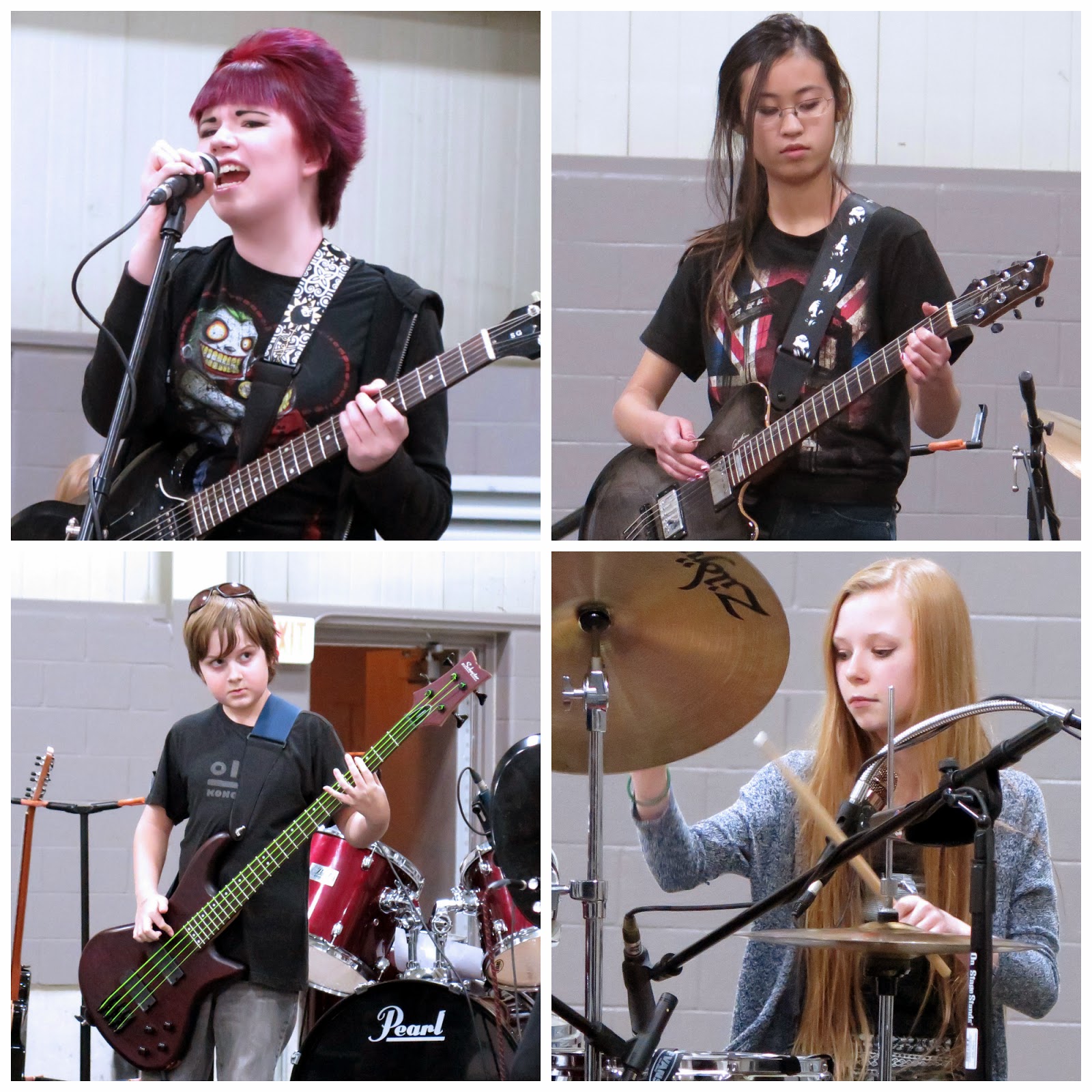 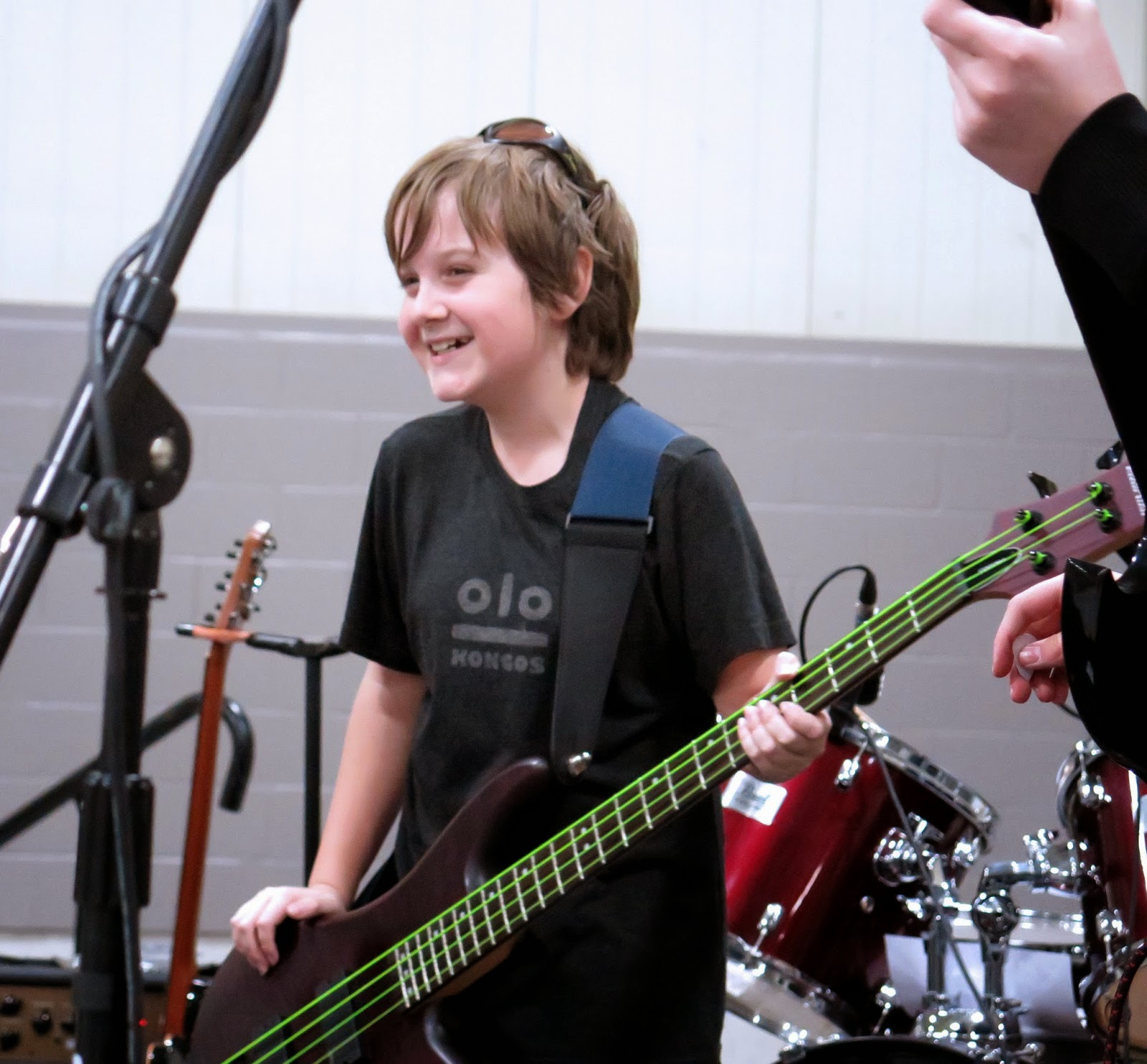 Connor, who I think is 12, is a great addition to the band and held his own playing a bass that was as tall as he was. 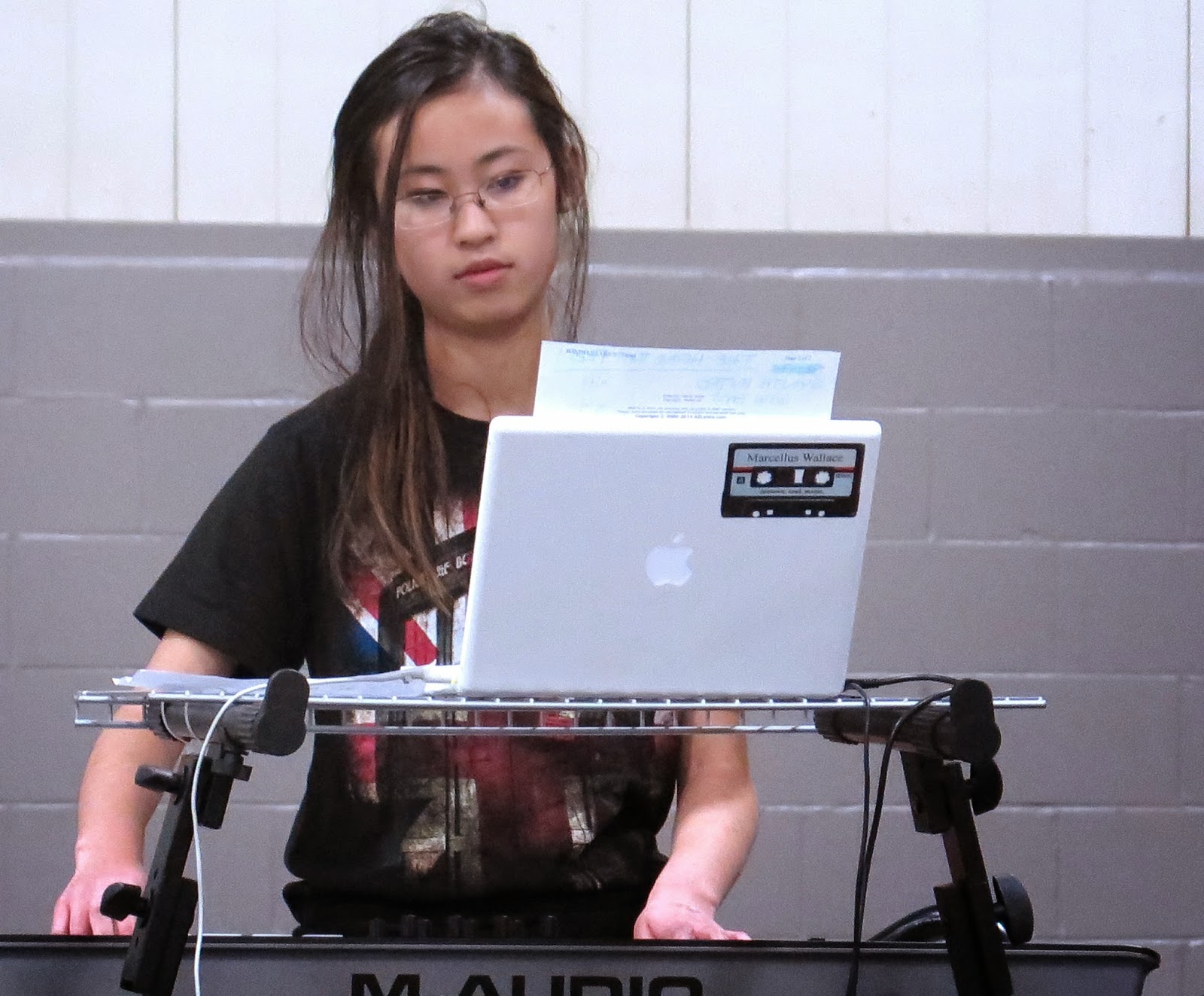 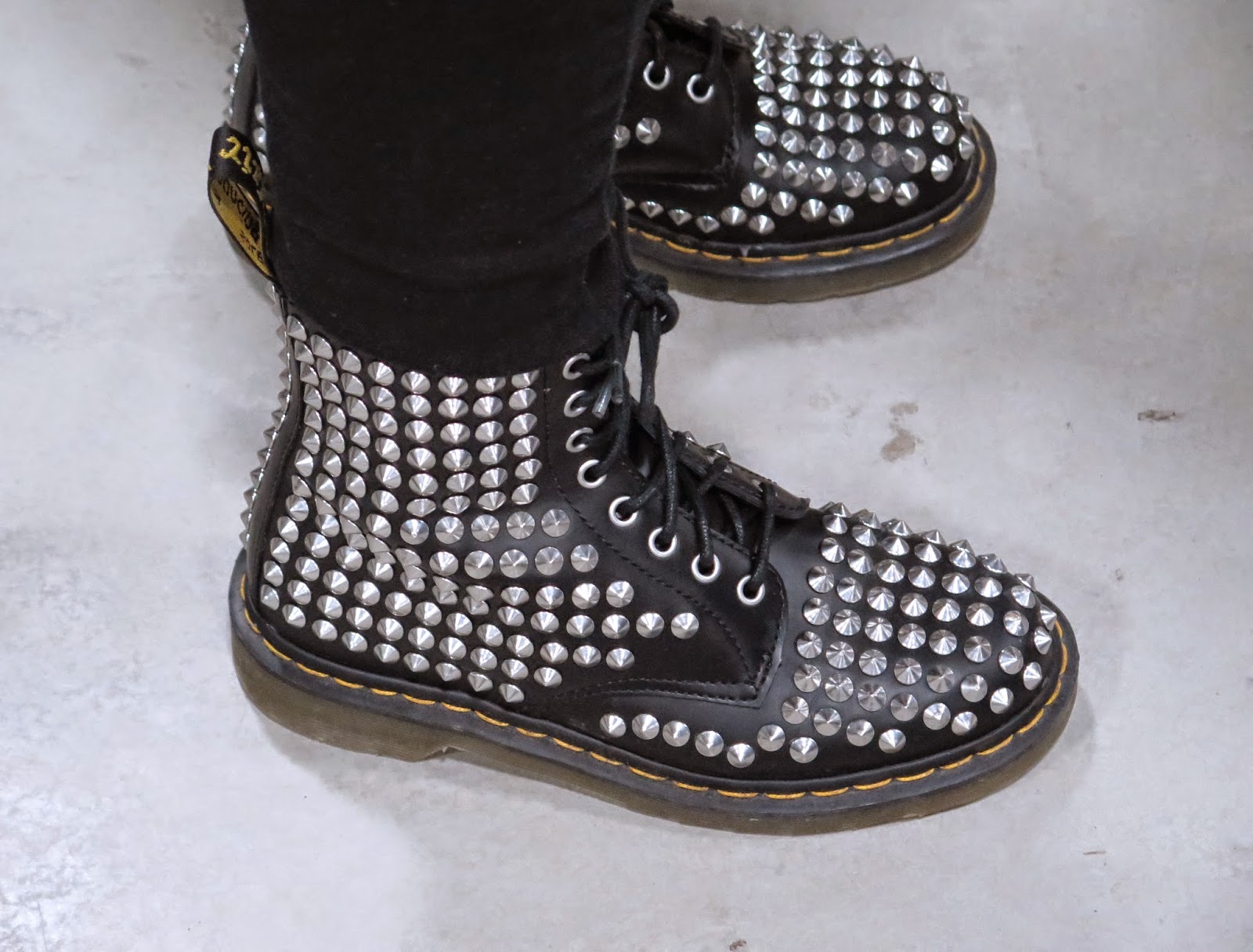 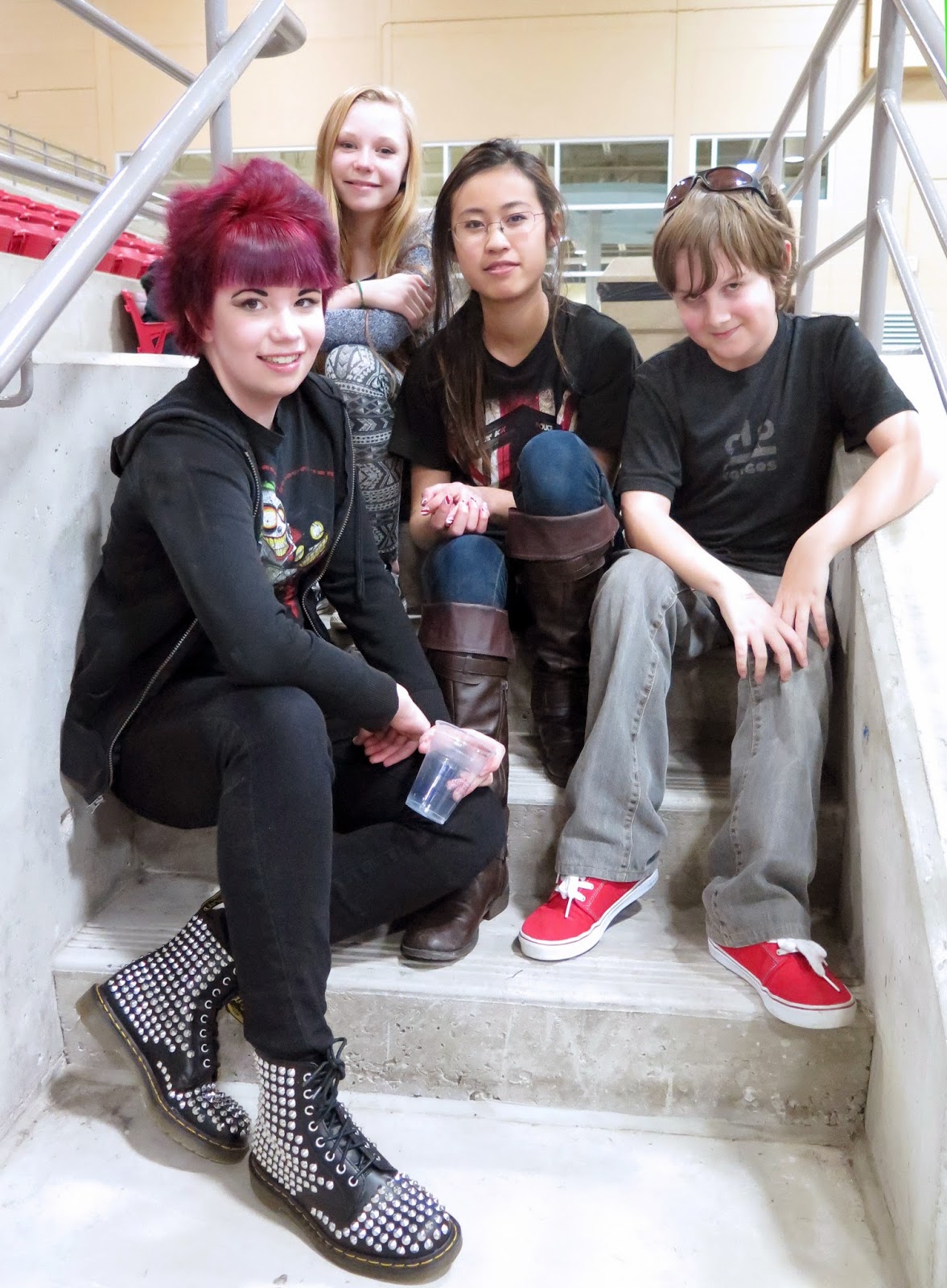 I asked the band to pose for a group photo after their gig and was even able to coax a smile out of everyone.  If you're in London, and get an opportunity to hear this band, you'll be won over by their youthful enthusiasm, impressive talent, and bucket-loads of charm.
You can find a couple of short videos of the band performing on my previous post about them here.

The next roller derby game is January 10th, 2015
Posted by Forest City Fashionista at 9:46 PM