Going To The Dogs


I used to consider myself a diehard cat person.  When I was a child, stray cats were always following me home (which may have had something to do with the attention I would lavish on them), and I wanted my own kitten desperately.  Unfortunately, I was also very allergic to cats, so I had to content myself with petting ones belonging to neighbours, and cope with the itchy eyes and sneezing afterwards.  Dogs were okay ( I loved all animals, still do), but cats were my top of my pet list.  Fast forward to a few years ago, when I started to meet more and more dogs belonging to neighbours and friends and discovered that there were some breeds to whom I wasn't allergic, and that were totally adorable.....almost as adorable as cats.  I knew I couldn't have my own at this stage in my life (not enough time at home, or the financial cushion for vet bills), so after some research, I got a rat instead.  Those of you who follow my blog know that Fred was a much-loved little rat, and she was fascinating, frustrating and always very entertaining.  Now that she's gone, I find myself looking for any opportunity to pet a furry critter.   New York was the perfect place for that. 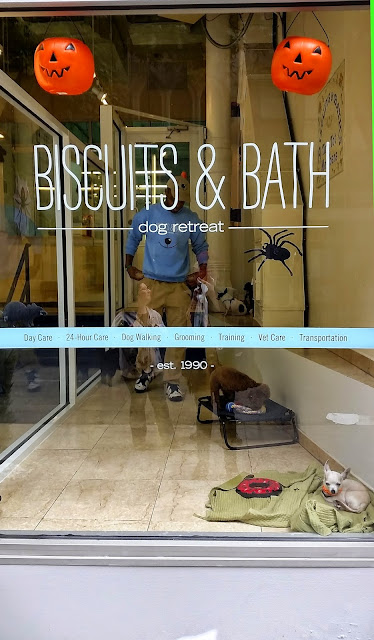 New Yorkers love their dogs - mostly small ones, due to the small size of the apartments.  If being left alone in the apartment when his/her people are at work gets stressful, your dog can spend the day at the Biscuits and Bath dog retreat.  It appeared that the job of the guy in the window was to play with the dogs, and from what I could tell, he certainly lacked enthusiasm for it.  I wanted to go in and tell him that I would be happy to take over and play with dogs all day.  Some people just don't know when they have a good thing going. 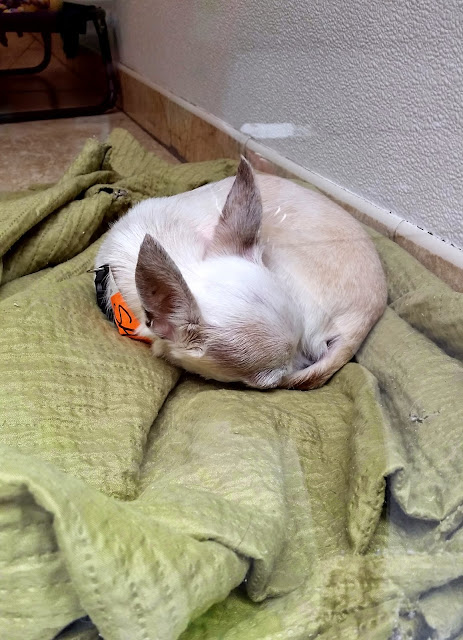 The little cutie above was named Salma, according to her orange sticker

The hotel I stay in is in a residential neighbourhood, so in the mornings and early evenings, the sidewalks would be full of people walking their dogs.   I always ask the owner first if I can pet their dogs and most of the dogs I met were thrilled to meet a new friend. 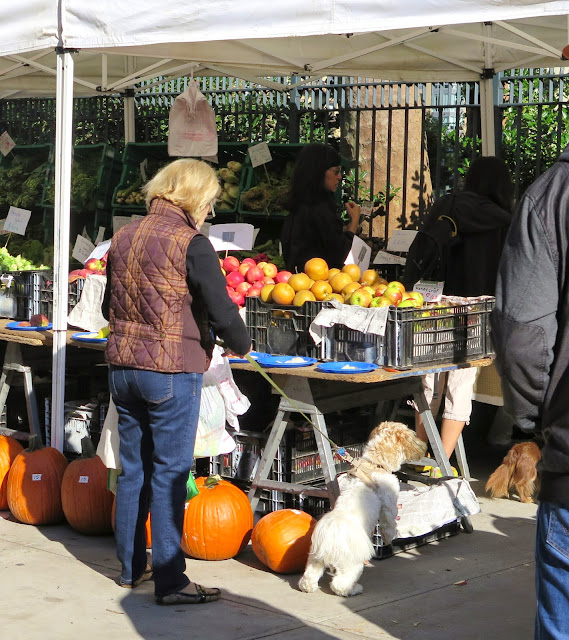 On Saturday morning I ventured out of my hotel to find that a small farmers' market had sprung up right across the street, and in addition to pumpkins, apples, pears, bread and pickles, there were people with their dogs.  I saw this woman out with her dog a few times during my stay. 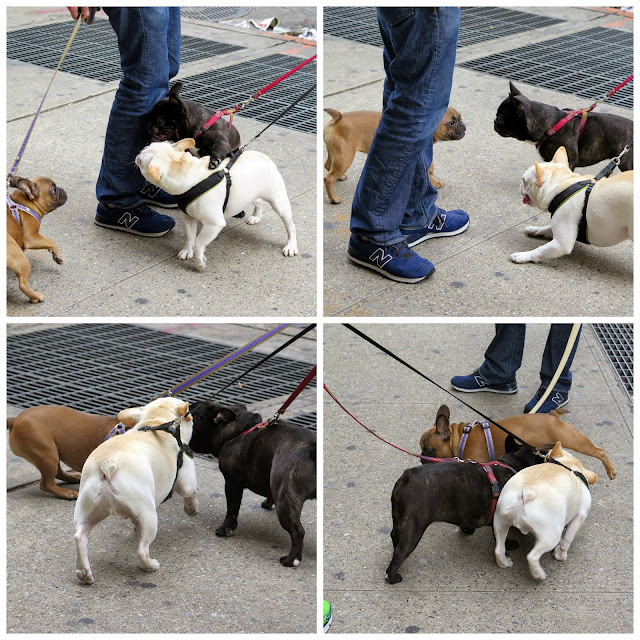 I stumbled on this scene and stuck around long enough to see how it would play out.  I think the little brown one is a pug (her name was Eunice!) and the other two are French bulldogs?   Those of you who know more about these things, feel free to correct me.  Anyway, I loved the way the scene went from "I am kind of freaked out by you guys" on Eunice's part,  to a gigantic sniff fest in about 10 minutes.  At least in New York, no one bats an eye when you stand in the middle of the sidewalk taking photos of a random dog meetup. 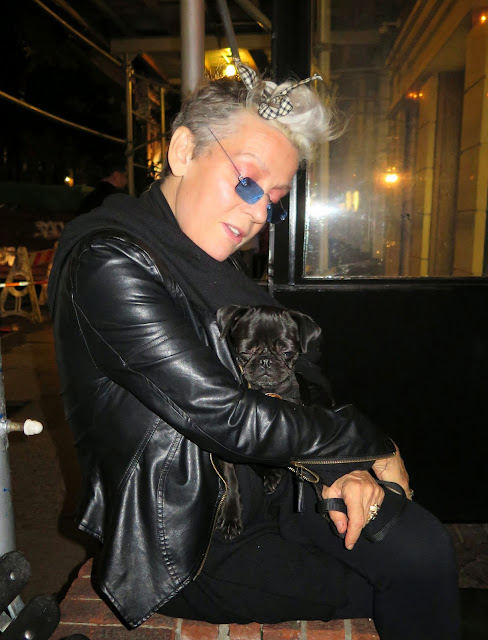 I was able to spend some quality time with the little pug in the photo above, and her mama.  Marja Samsom recently acquired little Bibi and the two of them joined Jean, Valerie, Carol and I for drinks on Friday night.  The weather was lovely, so we sat out on a patio, fortunately for Bibi, who probably wouldn't have been allowed in the restaurant.  Look how well she coordinated with Marja's outfit!  Bibi also went to the Vintage Show the next day, and charmed everyone who crossed her path. 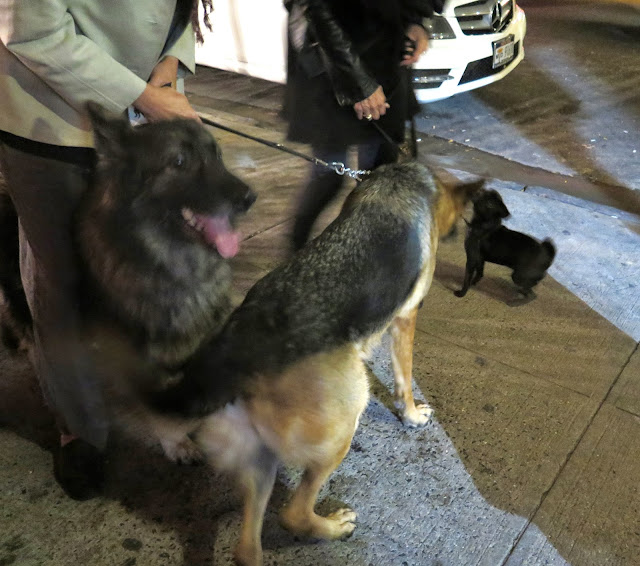 There was another woman sitting on the patio, enjoying a solo dinner, with her two dogs, a German Shepherd and a Belgian Shepherd, lounging on the sidewalk just below her.  They occasionally got fussy and some sessions of barking ensued, but for the most part they were pretty good.   While we were all sitting there, a group of twenty-somethings walked by, and one woman yelled to the woman with the two dogs, "I sure hope they didn't come from a breeder and that they are rescues!!"  They were rescues, and in an ideal world, all animals in shelters would find loving homes, but I couldn't get over the nerve of that woman to make a remark like that to a stranger.  I've learned from my visits that if New Yorkers like something, they tell you, and if they don't like something, they'll also tell you.  There's no fear of expressing opinions in the Big Apple.  When she was ready to leave, Marja took Bibi over to meet them.  Despite the huge size difference, Bibi held her own. 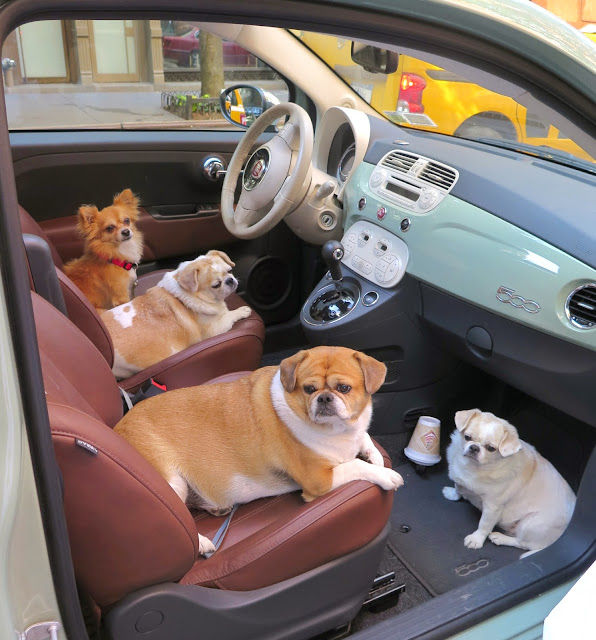 This was the best dog-sighting of the entire trip.  I was heading to the Manhattan Vintage Show on Saturday and as I was passing a pretty little mint green car, I happened to glance inside the open passenger door....and this is what I saw.  I stopped dead, and asked the man who was leaning against the open car door if all of them belonged to him.  They did, and they were headed to a Halloween Party for dogs happening that afternoon - I'm thinking it was this one.  He had costumes for the dogs, but wasn't sure how the dogs were going to react to them.  While I was standing there chatting with the owner, another woman walked by, stopped, and asked if the spectacle in front of her was real, as she said, "It looks like a painting".

One day I hope to have my own little canine companion but in the meantime, I will continue to dispense ear scritches and head strokes to any willing dog that crosses my path.
Posted by Forest City Fashionista at 6:52 PM