I don't get really excited about bands much anymore.  There have been instances in the past where I've been to a great concert and I was pumped for days afterwards (David Bowie and Leonard Cohen come to mind), but in general, while I still enjoy discovering new music, I don't feel the same desire to know details about the members of the band as I did in my 20's when I was working in record stores and my days and nights were spent around music.  However, I felt a bit of that old thrill a few weeks ago, when Heather and I went to Woodstock to watch a roller derby game, and there was a band playing at half-time... 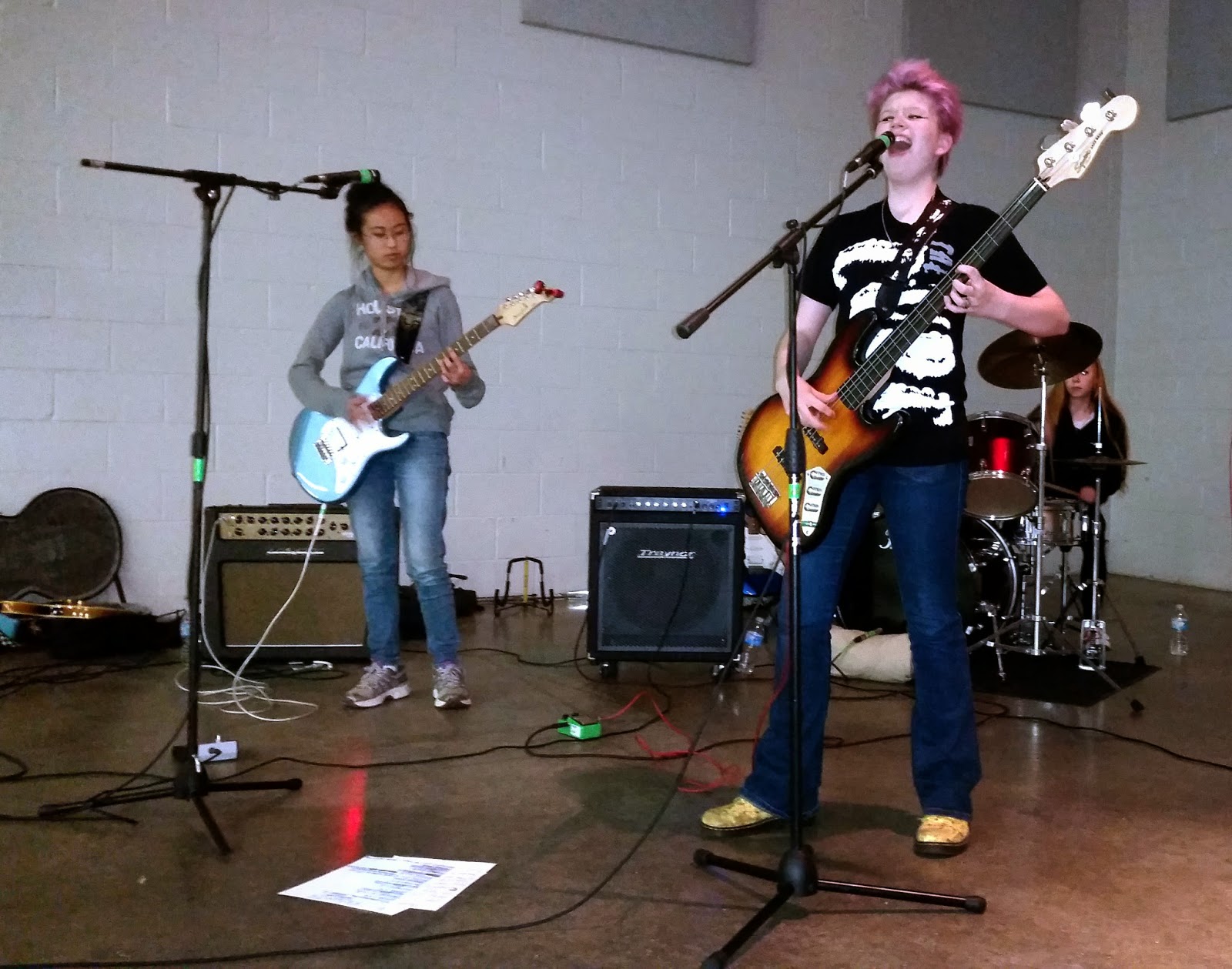 I heard the unmistakable opening chords of one of my favourite rock and roll songs (Baba O'Riley by The Who, which for the longest time I thought was called "Teenage Wasteland"), and turned around to see that they were being played by a band consisting of girls who were definitely not old enough to know the song from when it came out.   The band, which goes by the name Populus Romanus, consists of Queena, far left, on lead guitar and vocals, Grace on lead vocals and bass, and Grace's sister Lucy on drums.  I should probably mention that Queena is 12, Grace, 13, and Lucy, 11.

Grace has a powerful voice, and loads of stage presence, and along with Queena (who sang the Pete Townshend part),  Lucy, and assistance from a guy playing keyboards off to the side, they gave a thoroughly enjoyable performance.  You would have thought I was either a parent, groupie, or teenager by the way I whipped out my out my phone and recorded a video of the song, part of which is posted above.

That was followed by the Led Zeppelin song, Kashmir

They played a closing set after the game was over that consisted of The Ramones' classic anthem Blitzkrieg Bop (Hey Ho, Let's Go!) and Seven Nation Army by The White Stripes.  When I asked their mother about their choice of material for this particular gig, she said that the band wanted to tailor the songs to the audience, and thought that the people that came to Roller Derby would probably be familiar with those songs.  At the time of the show, the girls had only been playing together for a couple of months. 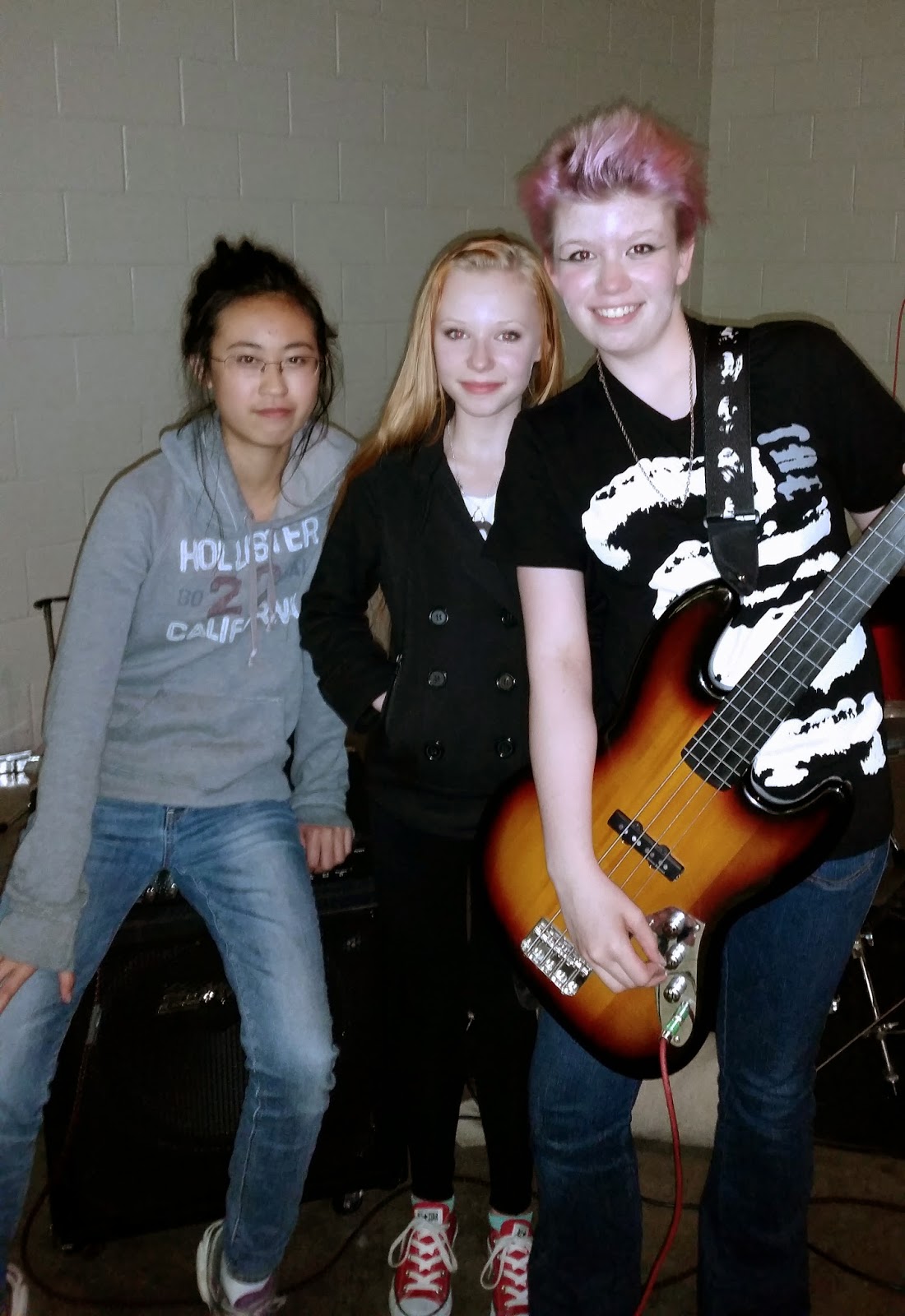 
Remembering how insecure and awkward we were at their age, Heather and I were in awe of the confidence with which the girls attacked each song they played.  Their informed, and eclectic music taste can be accredited to their parents.  According to their mother, who has a photography business,  Lucy and Grace's bedtime CDs featured the ballads of Tom Waits, Nick Cave and Leonard Cohen.  As I suspected, the girls are avid participants in other areas of the arts.  Queena is an accomplished pianist and a talented artist (I was able to see her drawings on her instagram account).  Lucy is a competitive Highland dancer, who recently won the highest honour possible at a competition in Scotland.  Grace danced in the Art Harvest Festival at the end of September and displays a maturity well beyond her years when discussing the band and her creative endeavors.   I had a moment where I wanted to adopt all three of them.

Heather spoke to Grace about the possibility of booking the band to play a half time show at a London roller derby game in the future.   Roller derby AND rock and roll played by a trio of talented (pre)teenagers - that will be a show you won't want to miss!!
Posted by Forest City Fashionista at 9:35 PM