Partying With the Renegades

I just returned yesterday from a whirlwind four days in New York City so until I get my bearings, and upload and edit the pile of photos from my trip, I offer some photos from the Grand Opening party at Renegade that I attended last weekend.  You may recall a previous post I wrote about the store for plus size women that opened in August here in London.  Owner Christine Gionet wanted to have a party to celebrate her new business venture, which has been doing quite well, and on October 18, she threw a shindig that included a fashion show, drinks, snacks, a dashing doorman, and a comedienne. 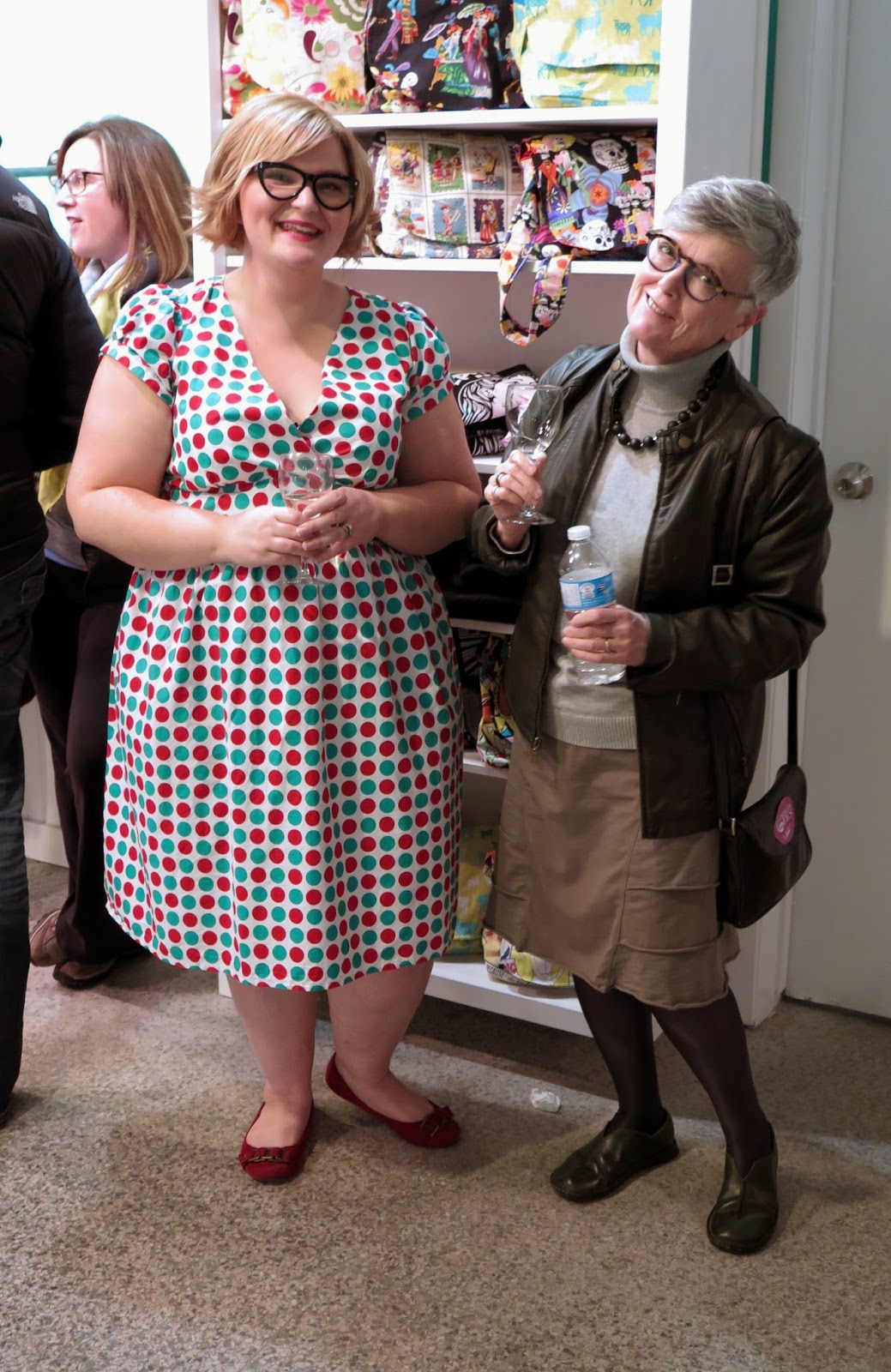 As soon as I arrived I spotted former London City Councillor Judy Bryant (R), and Tanya Park, who is running for Councillor in Bryant's ward.  Park was one of a group of women who were modelling clothing from the store throughout the evening. 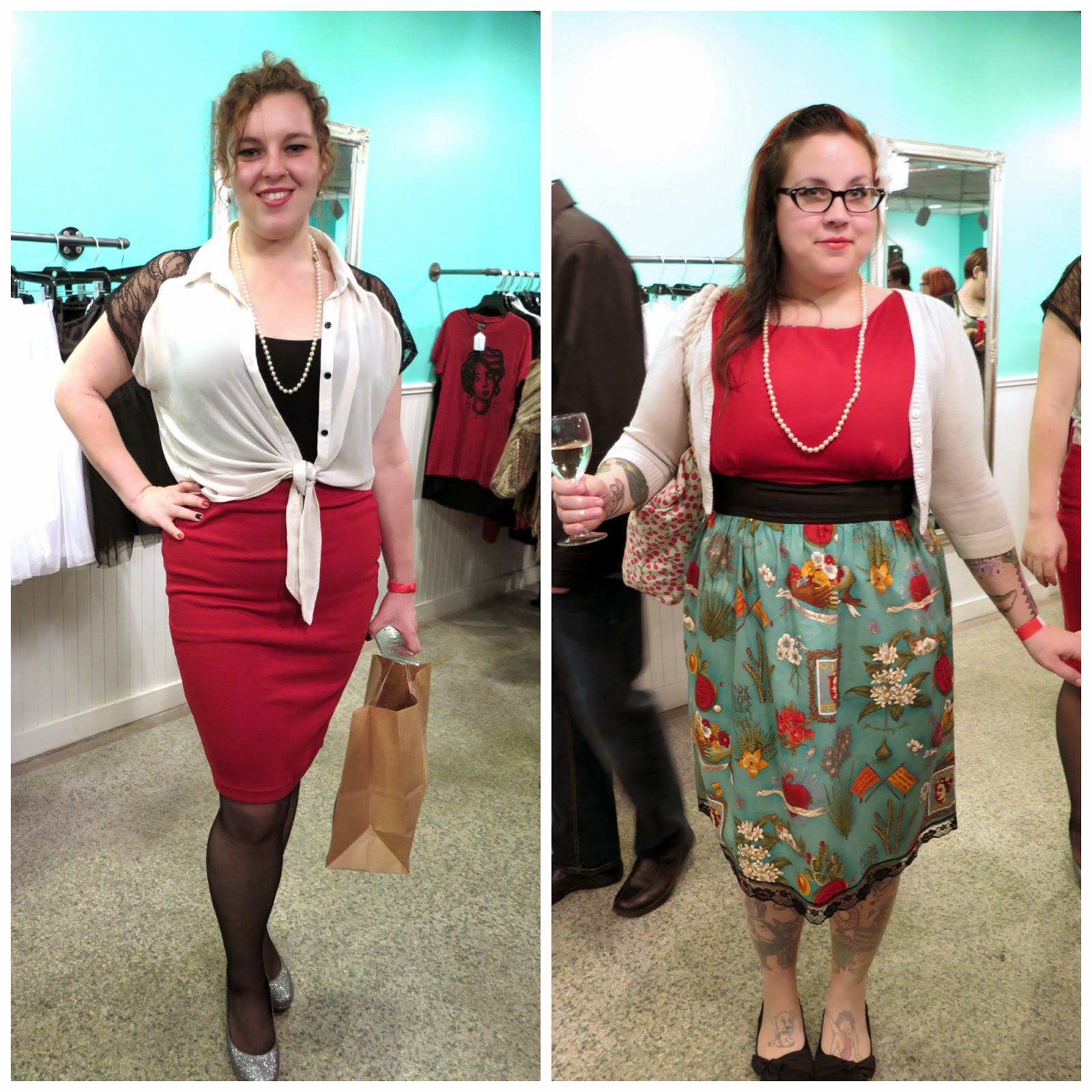 These two women looked party-ready in their red/black/white outfits.  The woman on the right purchased her dress at Renegade. 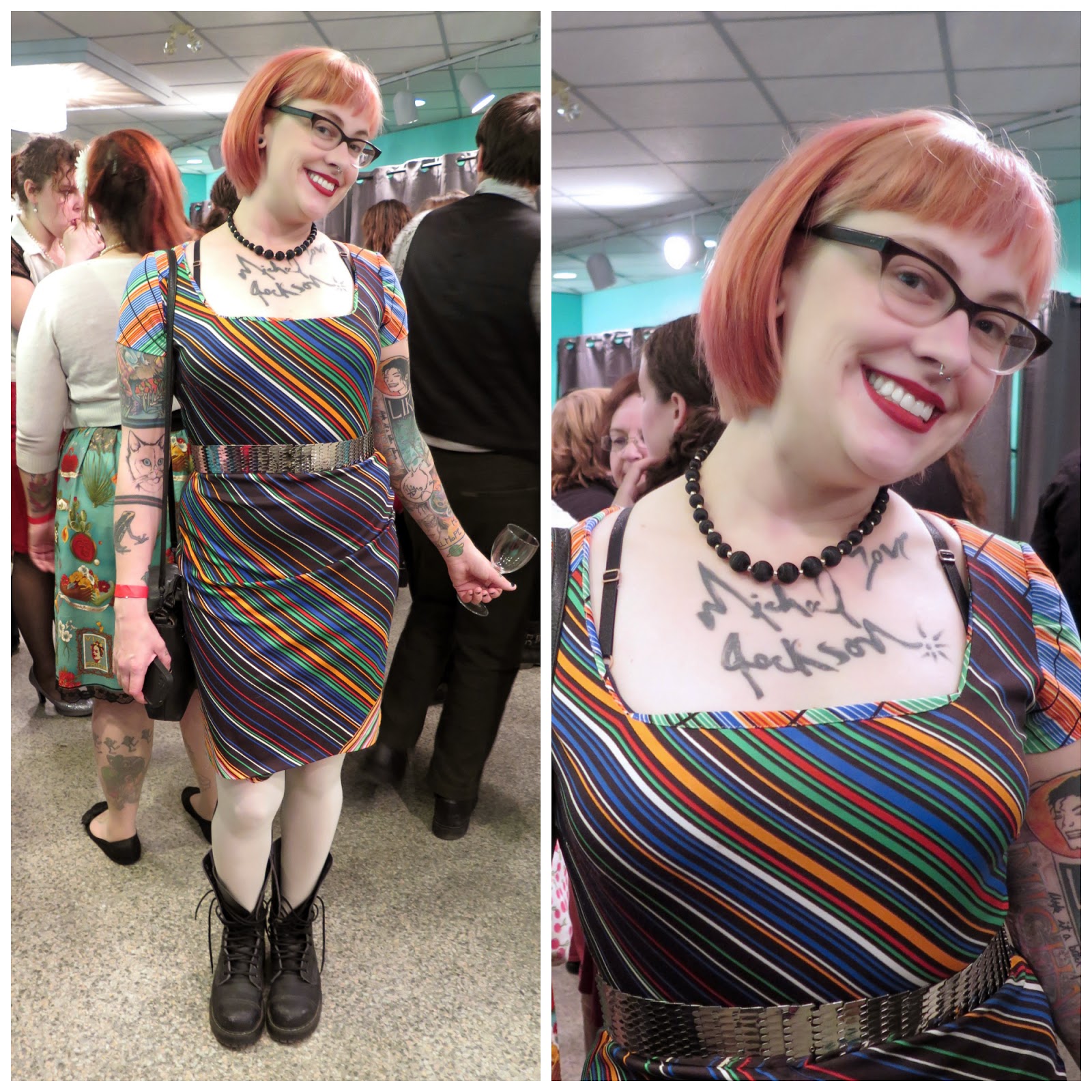 Arica, above, plays Roller Derby, and is a huge Michael Jackson fan.  In 2003, she was able to get Jackson to autograph her chest and then she had the signature tattooed on her skin. 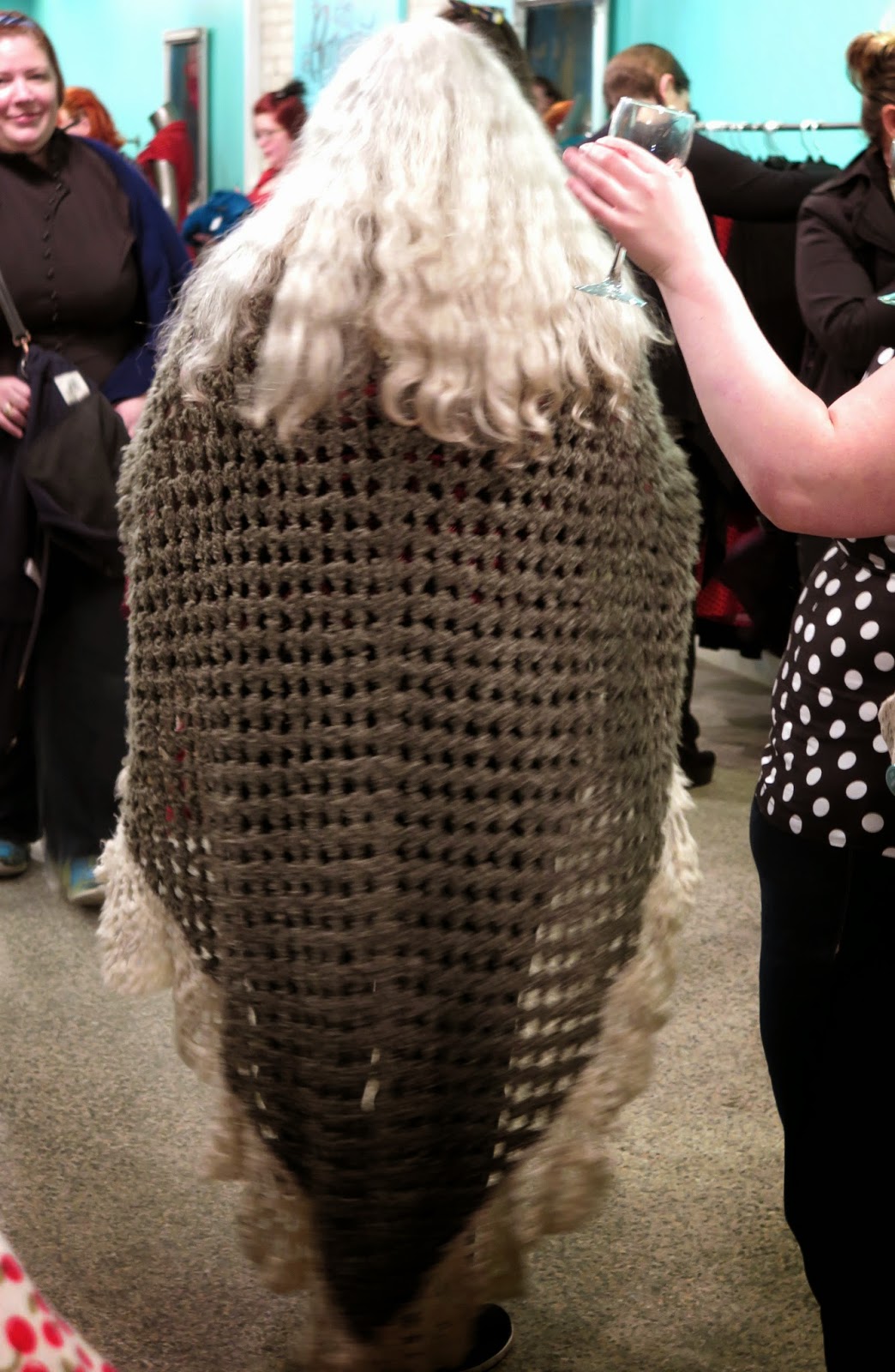 This woman made the poncho she was wearing, and it looked amazing with her beautiful white hair 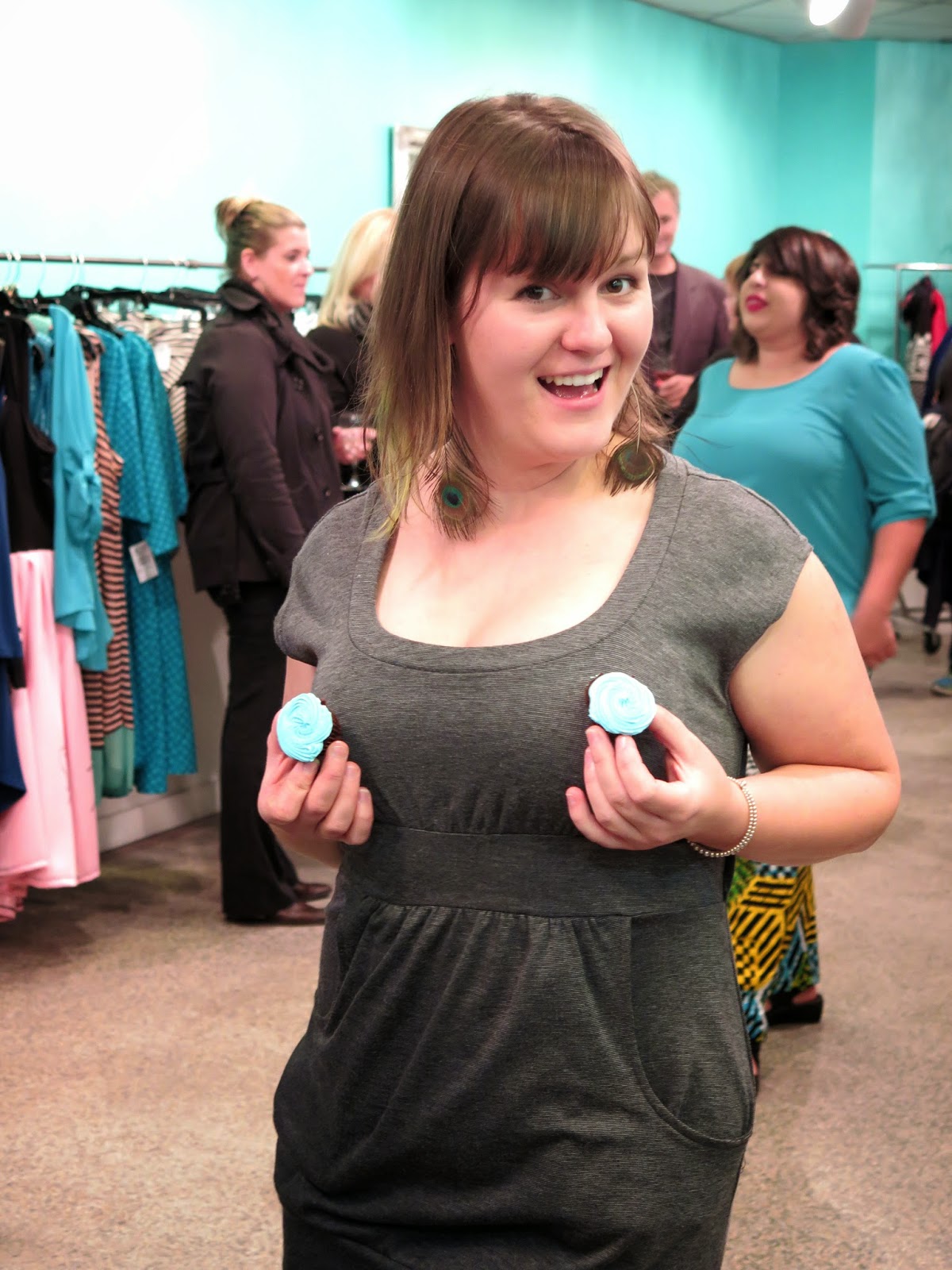 It was a lively group of women who knew how to have a good time, including the woman above, who made the bite-sized cupcakes she's showing off, for the event. 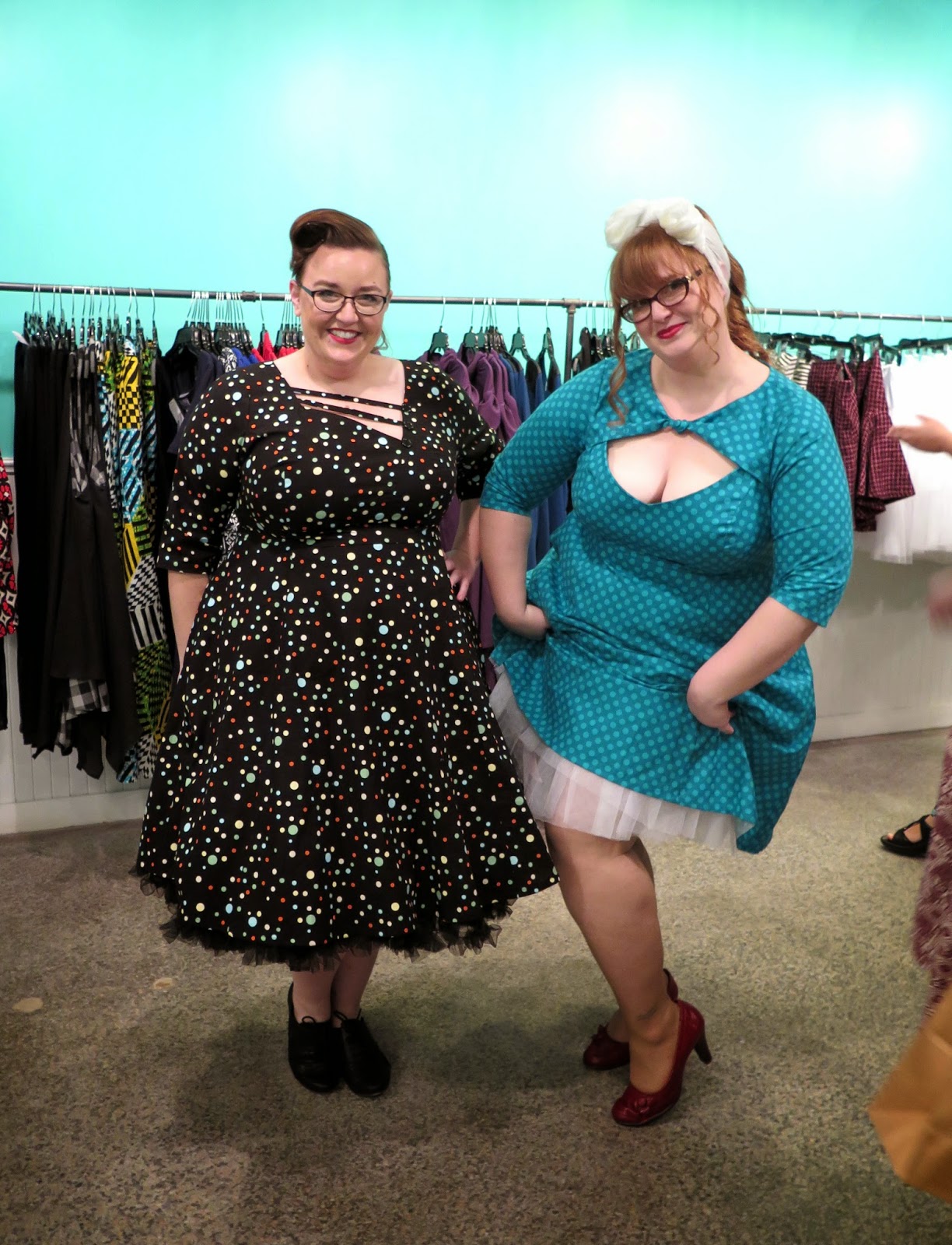 It was obvious that the models really enjoyed wearing the clothes; these two were more than willing to strike a pose for the camera. 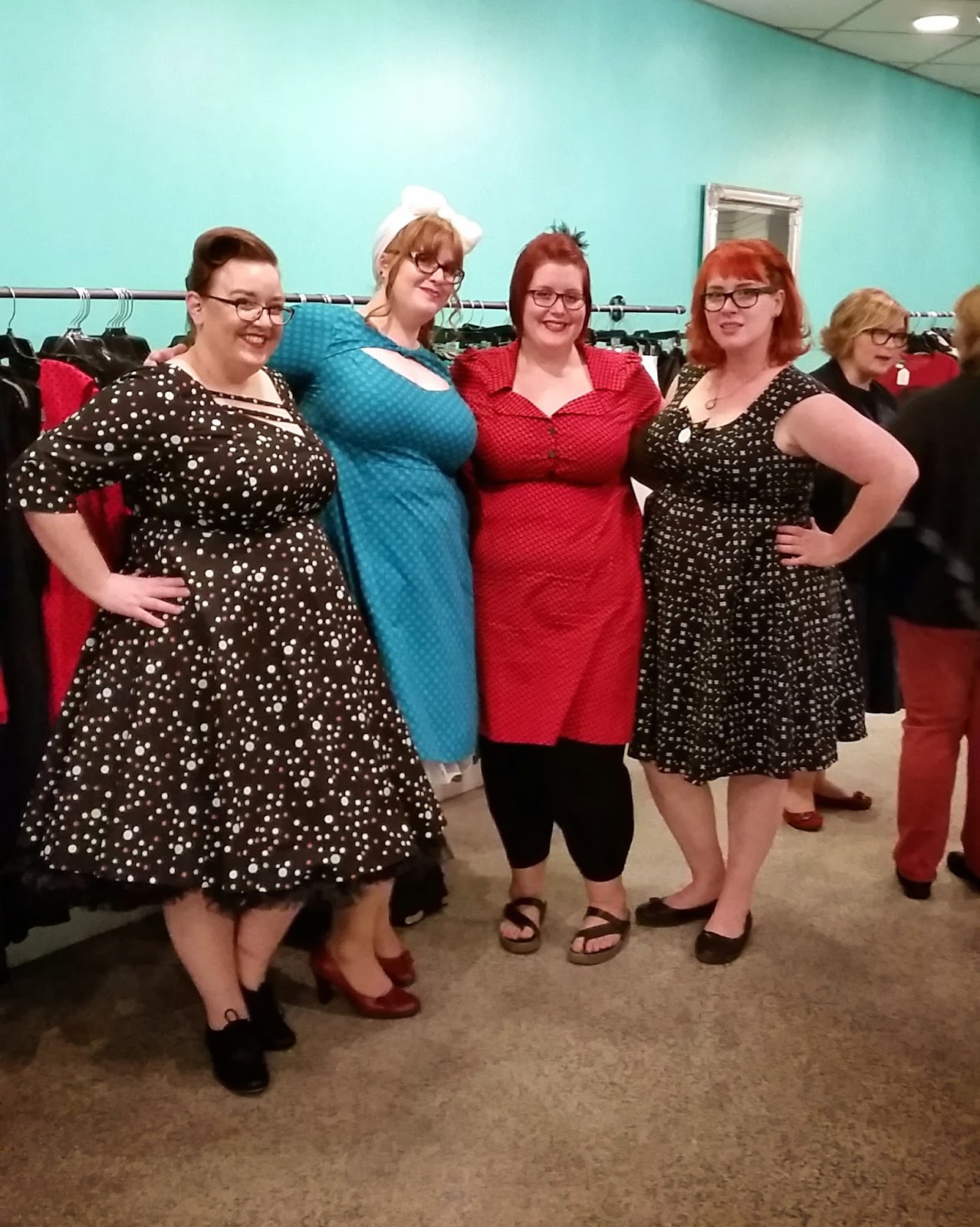 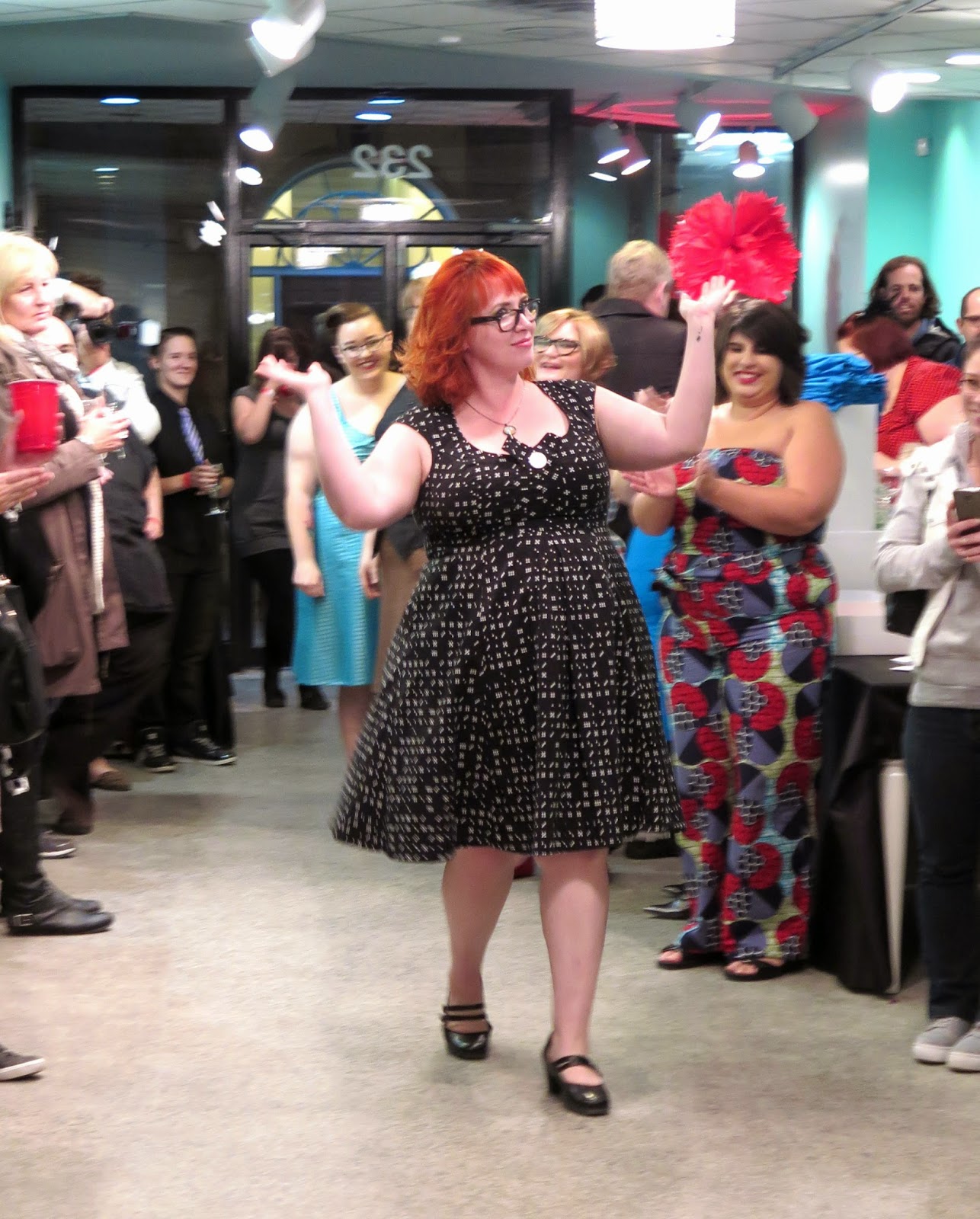 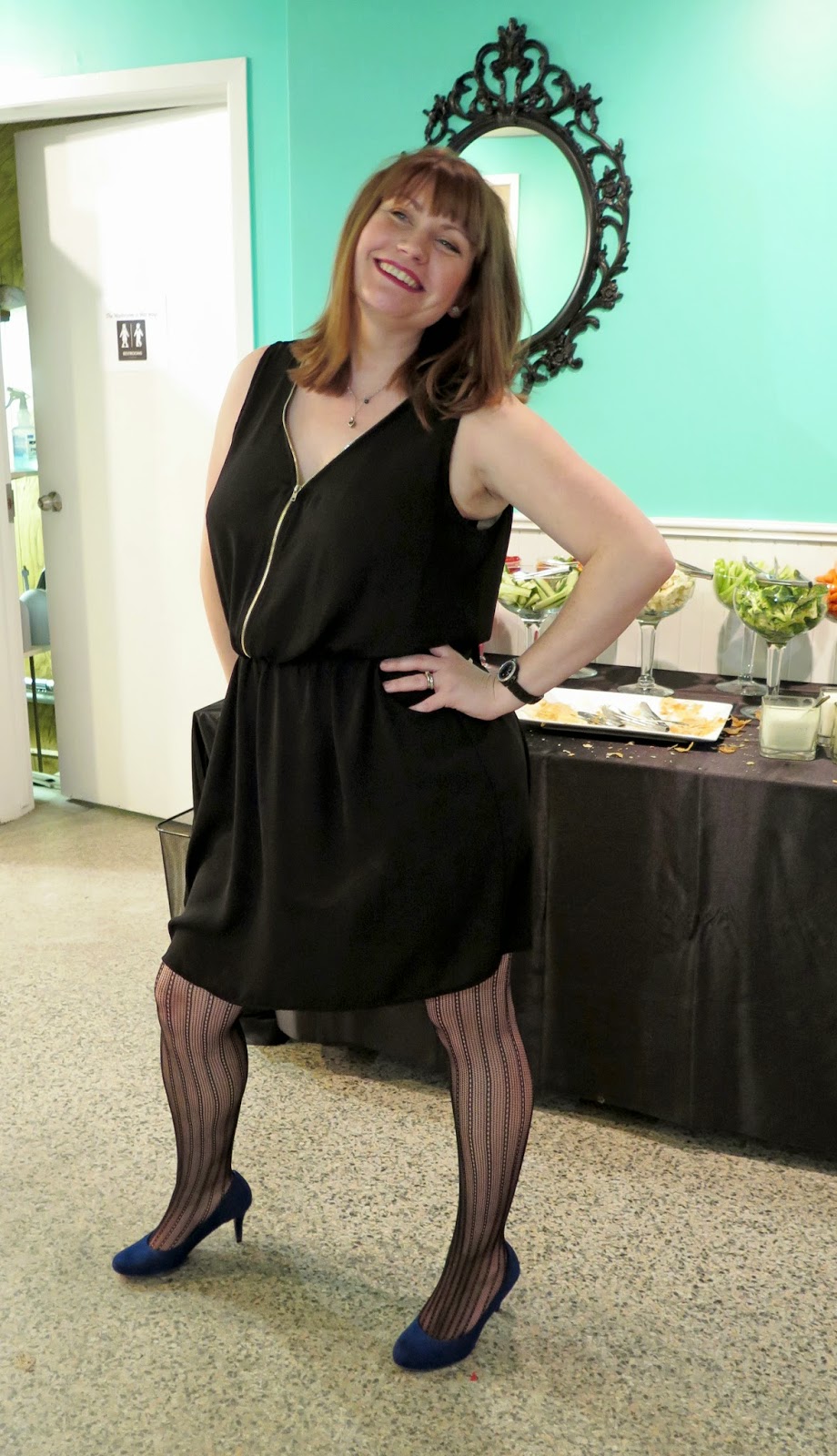 This woman said she felt amazing in this Renegade dress.  It was great to see larger-sized, curvy women modelling pretty dresses in bright colours, and the big smiles and sassy attitude showed they felt attractive and sexy in what they were wearing.   And really, isn't that what every woman wants? 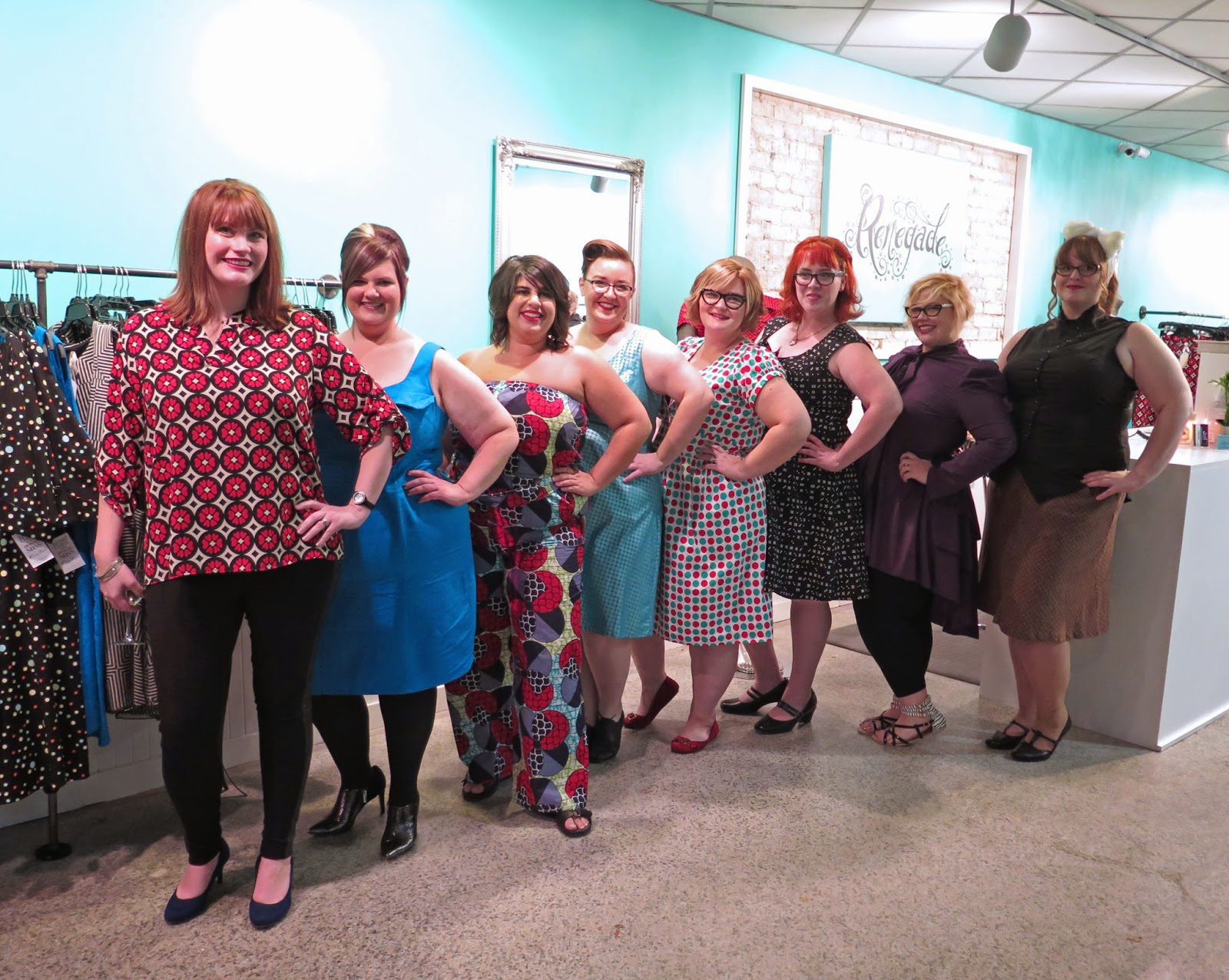 The marvelous models for the evening 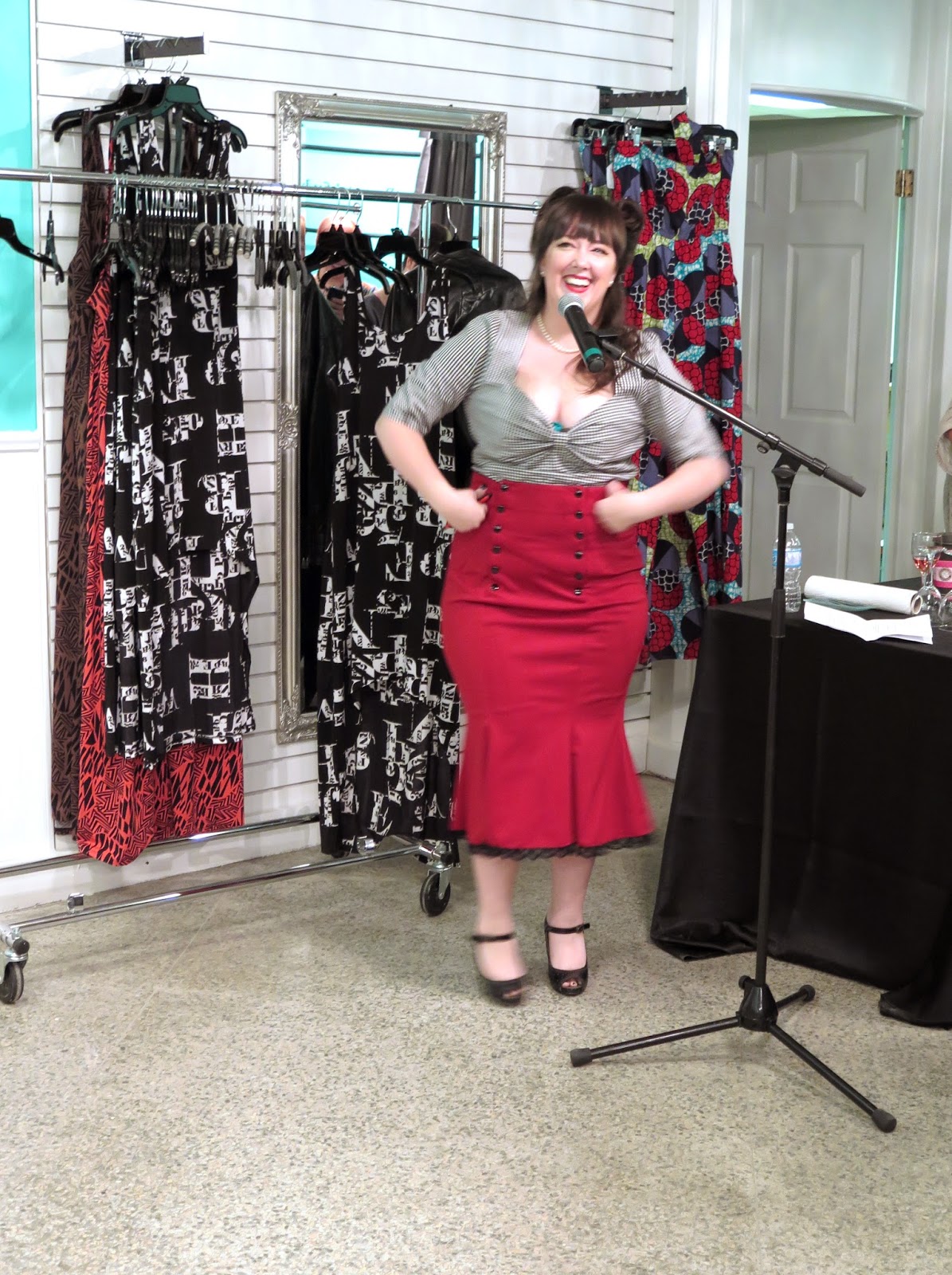 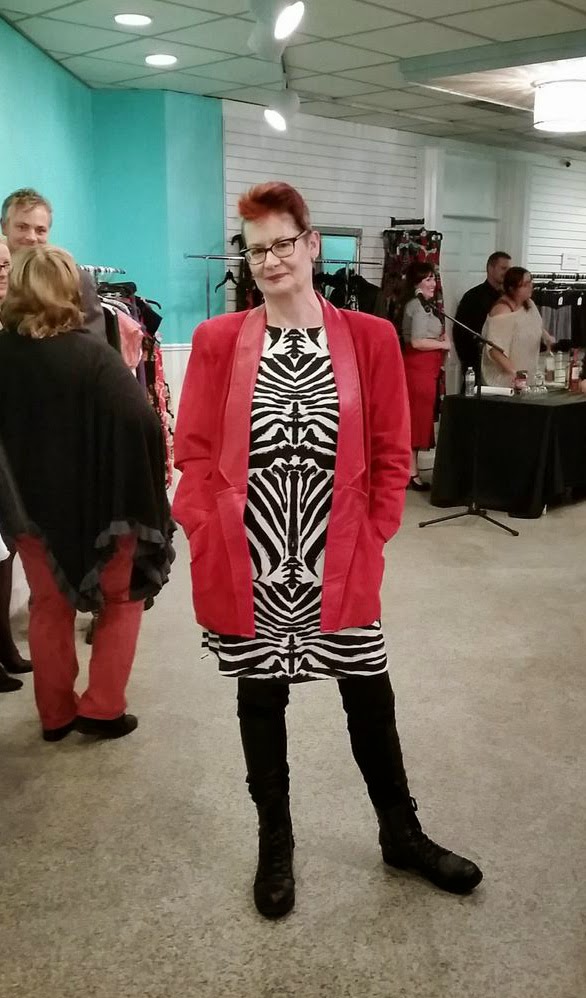 What I wore - my favourite zebra-ish print dress from H & M topped with a vintage suede and leather blazer from Jackpot Vintage.

My New York stories will commence later this week, but in the meantime, you can see some photos from my trip on The Idiosyncratic Fashionistas blog.
Posted by Forest City Fashionista at 10:36 PM