If We Could Talk To The Animals, Just Imagine It

*Warning - in addition to photos of cute furry critters, this post also has photos of a boa constrictor, so if you're snake-phobic, skip to the dogs and cats at the end


This weekend was the London Pet Show, which included the Purina National Dog Show, and the PAWSitive PAWS Cat show.  My heart turns to mush over most animals, so even though the results of my recent allergy tests confirmed that I am allergic to pretty much anything with fur, I decided to load up on antihistamines, pack my inhaler and camera and head to the show.  Heather, a pet owner and animal softy, came too, and we were psyched to pet all the things! 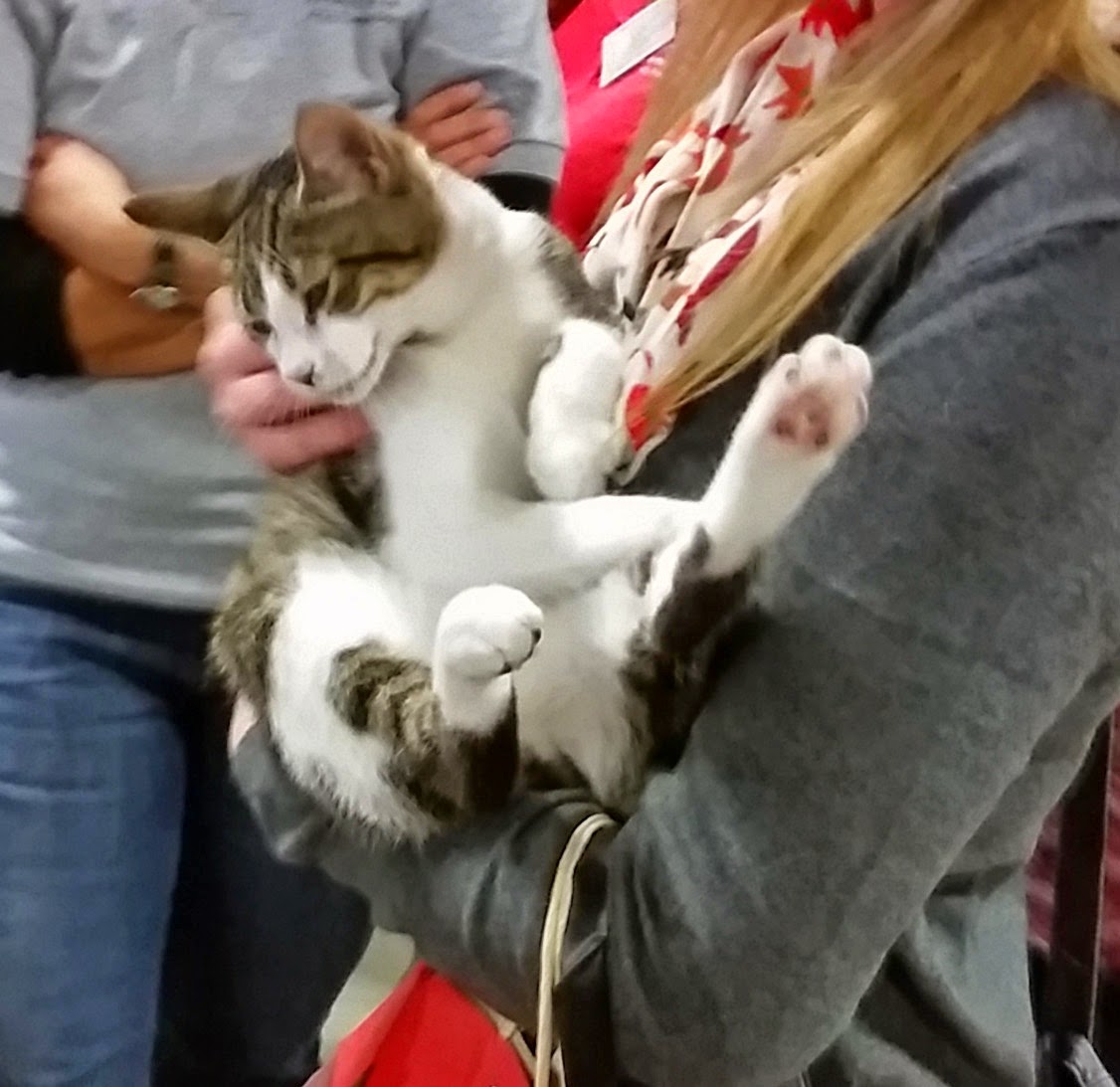 Our first stop was the London Humane Society cat adoption area - there were probably close to 25 cats in cages looking for homes, and while the show is a good venue to attract people who want to adopt a pet, it was sad to see all the beautiful cats that need a home.  I'm sure the Humane Society deliberately chooses the most calm, socialized cats to bring to the show, as they were all very chill - either sleeping, or happy to be taken out of their cage and snuggled by a potential new owner like the one in the photo above.   I like cats very much, and have had a few in my adult life, but I am very allergic to them.  Heather figured that if she could resist the uber-cute polydactyl kitten from the Farmer's Market, she could resist anything. 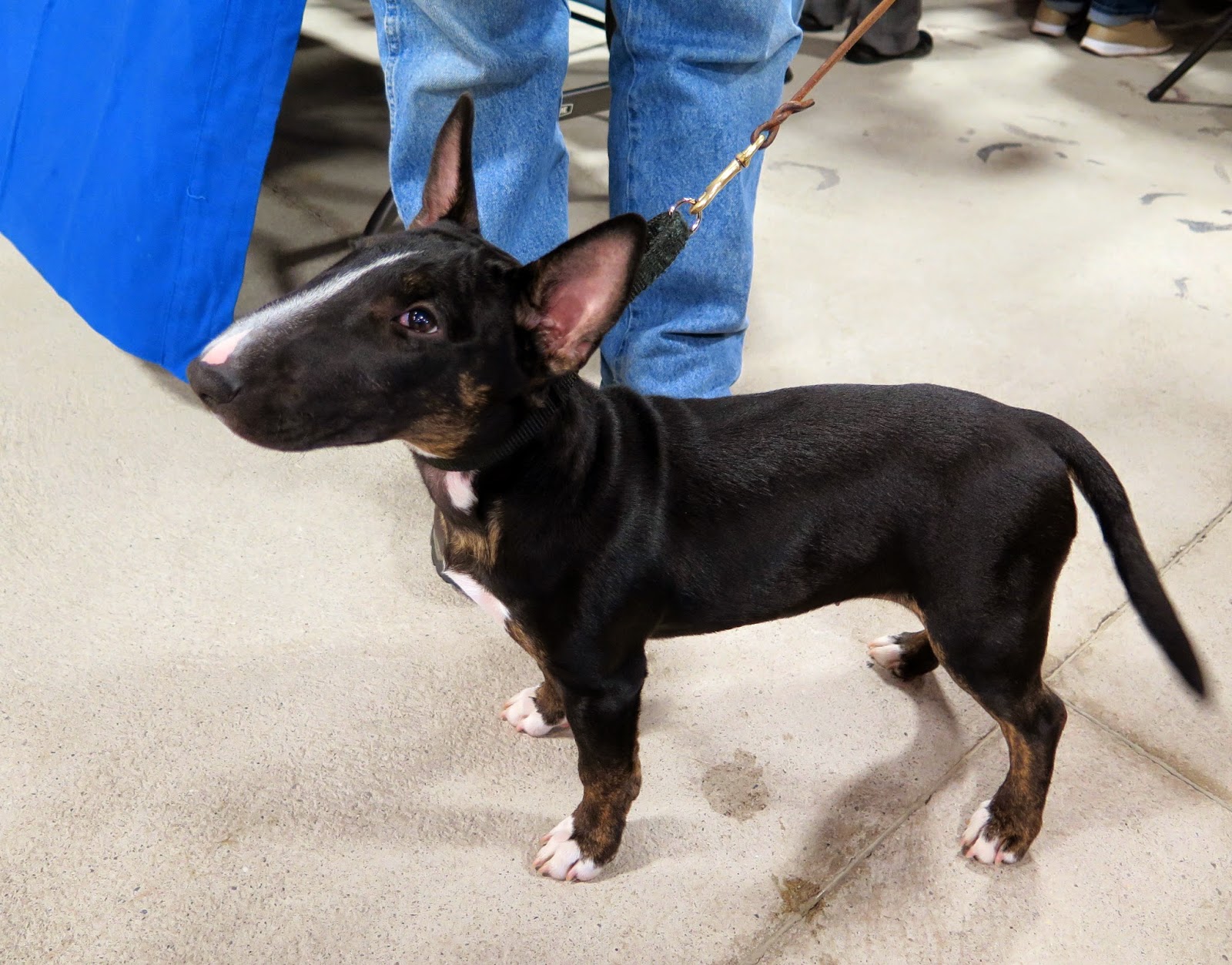 People were not allowed to bring their pets to the show, but many people who were showing their dogs were taking them for walks through the venue, which meant opportunities to get a bit of puppy love.  This little bull terrier was teething so he was more interested in finding something to chew on than being petted.  I loved his white racing stripe. 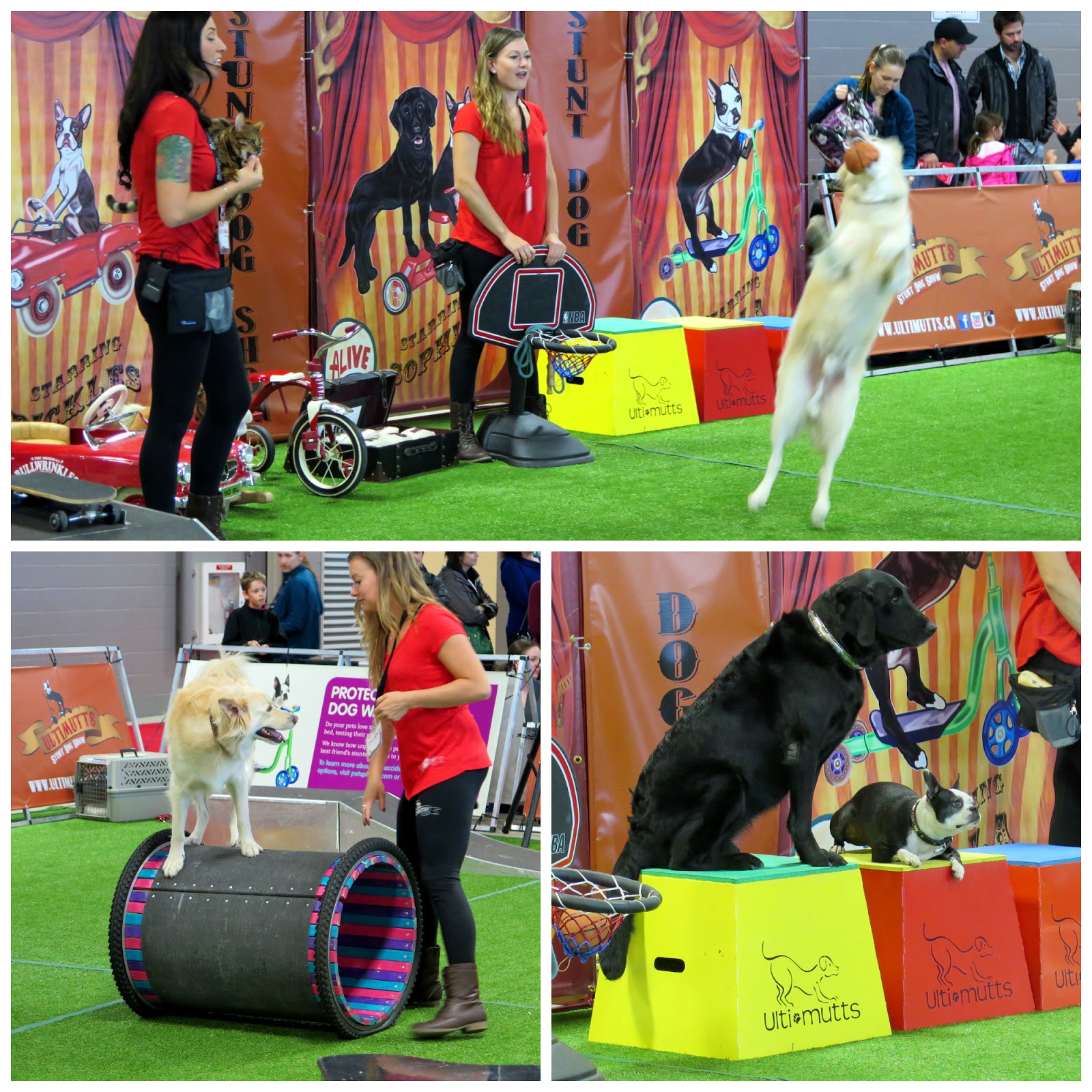 The Ultimutts Stunt Dog Dog Show had several performances scheduled over the weekend and we managed to walk by just as one of them was starting.    Sheldon (top and left), a lab/sheltie cross demonstrated his stellar basketball and barrel-rolling skills while Sophia and Bella wait their turn. 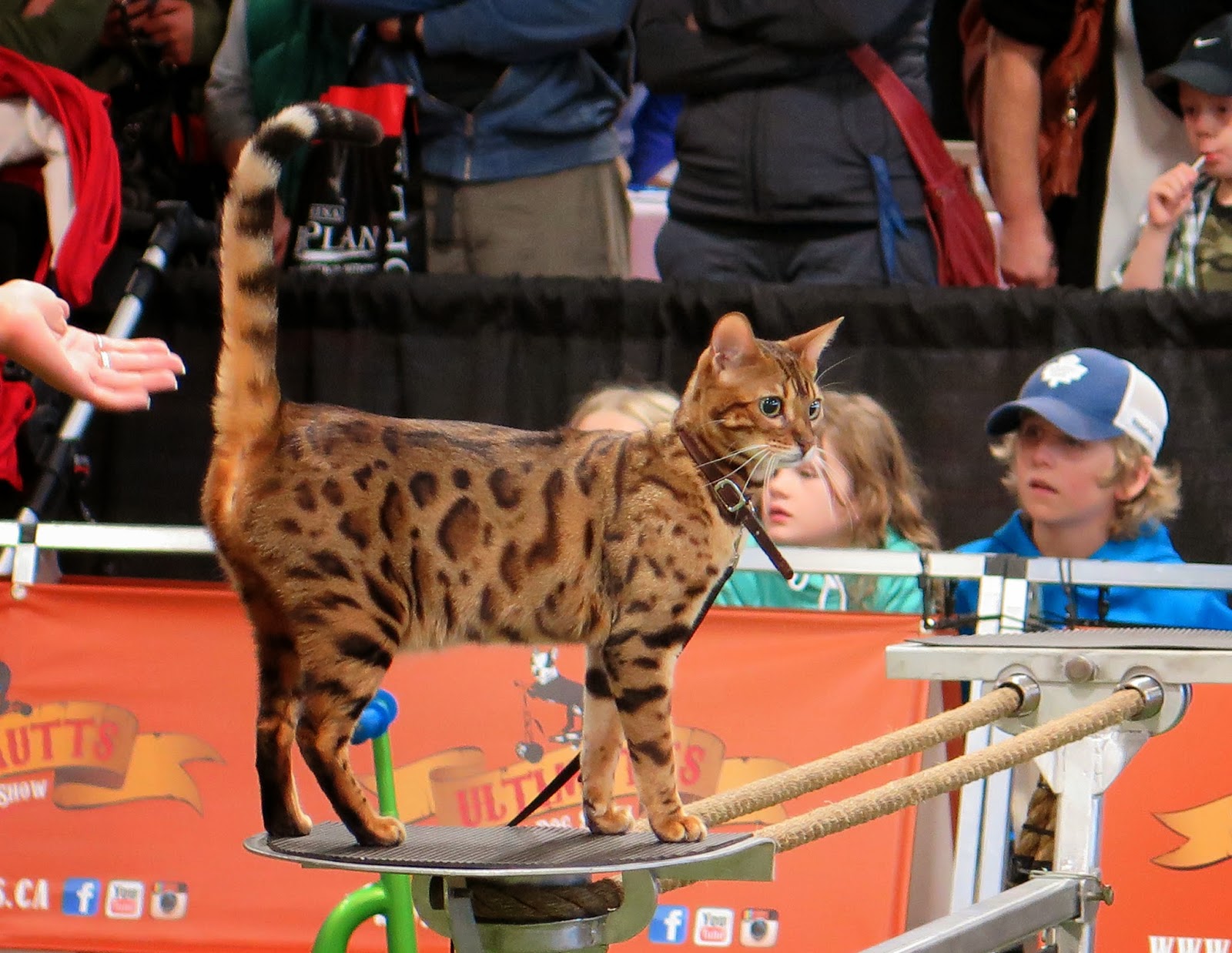 Ultimutts also featured a stunt cat, a gorgeous Bengal.  As we all know, cats are NOT fond of doing tricks on command, even for treats, and this one was no exception.  It did walk all around the railing that enclosed the performance area and honestly, it looked so pretty, it really didn't need to do anything else.

There were critters with scales and shells too.  Little Ray's Reptile Zoo was there with some snakes, lizards, and a turtle, and there was another booth that sold reptile tanks and other enclosures that had some very interesting creatures you could interact with..... 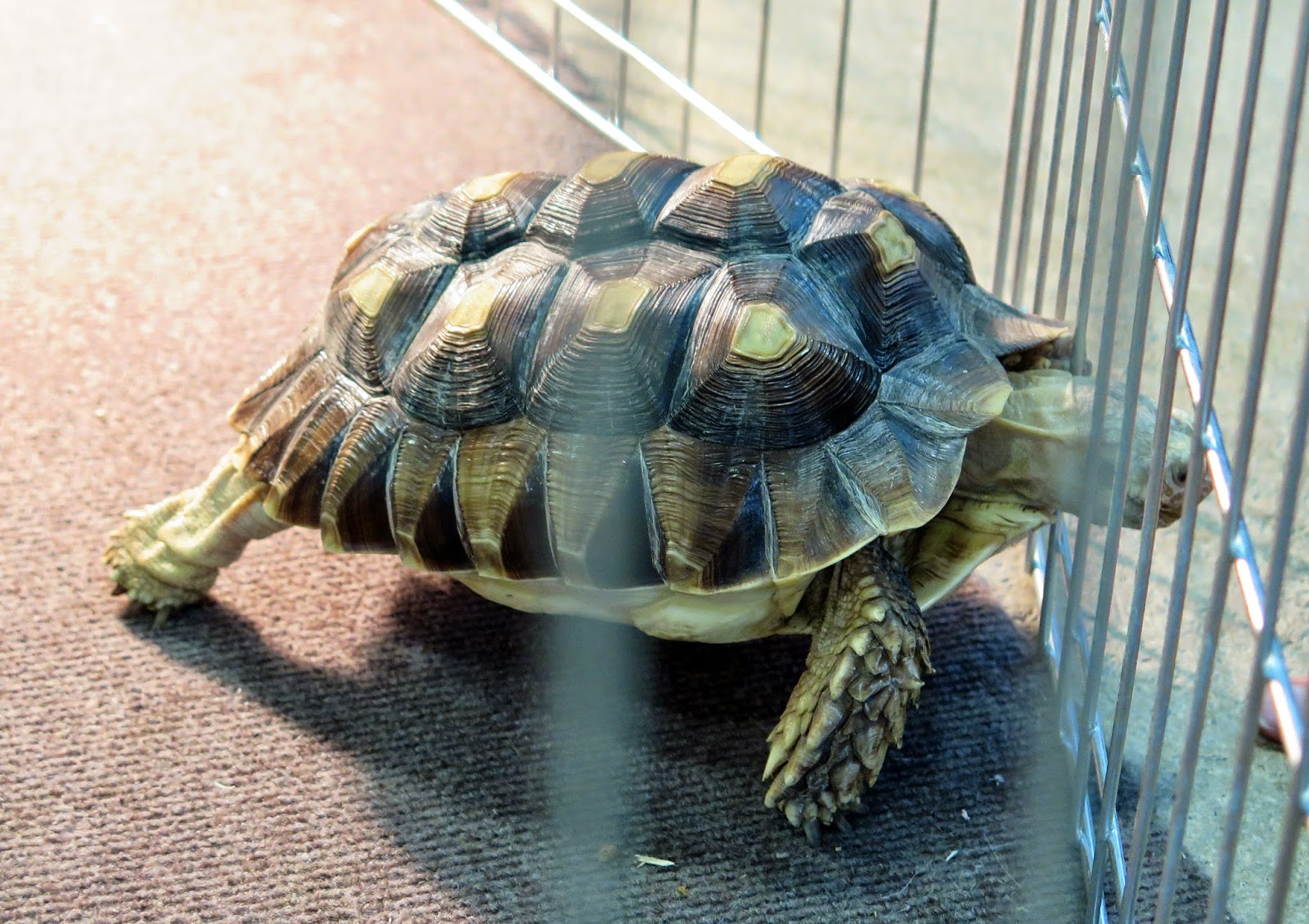 This little guy wasn't getting much attention and was just crawling around his fenced-in area until Heather and I showed up.  He came right over to the bars of the enclosure and tried to get our fingers as we stroked his scale-covered front legs.  I have no idea what kind of tortoise he was (I neglected to ask), but he was obviously quite social. 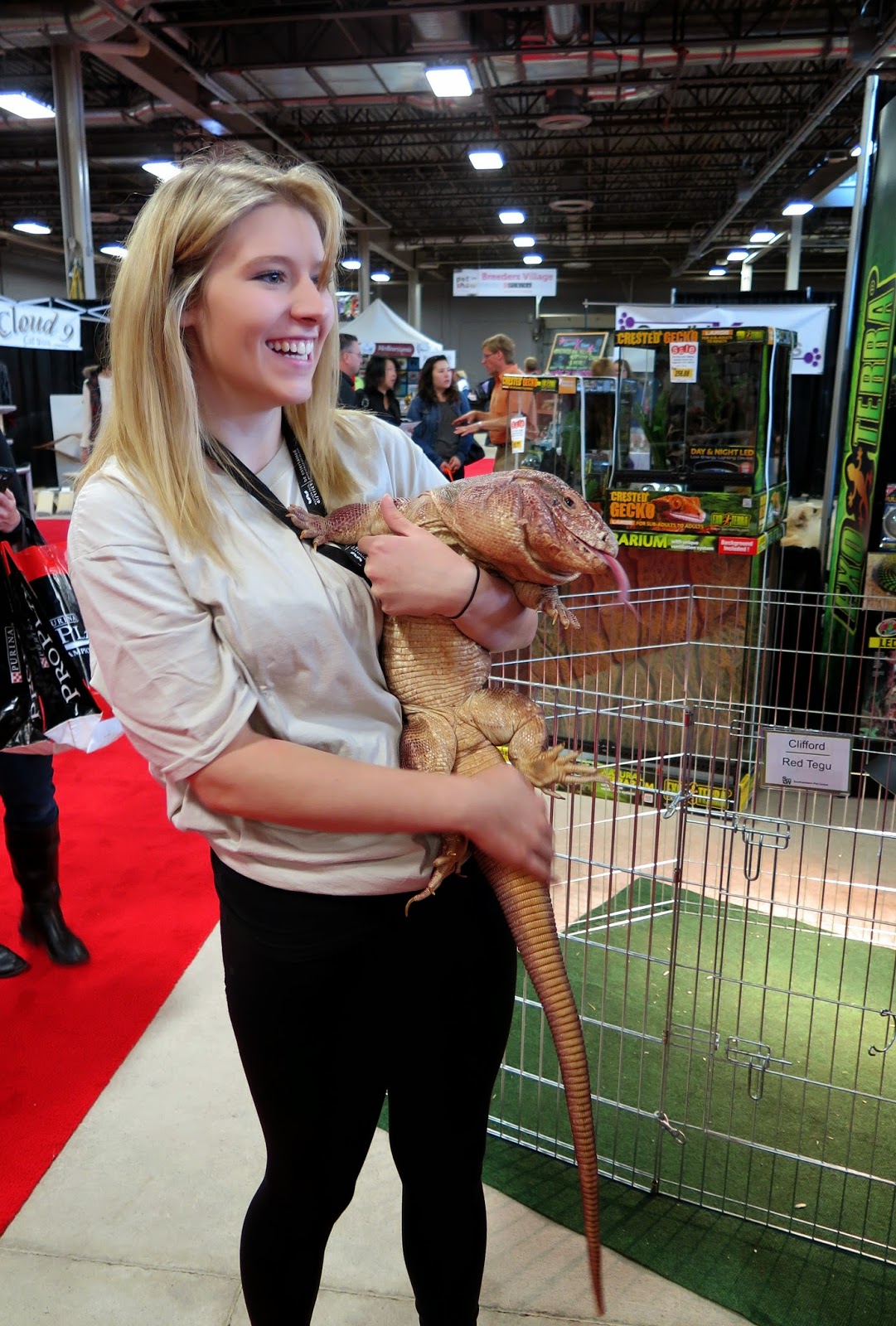 I don't know about you, but I can't imagine I would be as comfortable holding Clifford, a male Red Tegu lizard, as his handler is.   She's holding him like you or I would hold a baby, or a cat.  He may have a lovely personality, and he was certainly patient with the kids who were petting him after I took this photo, but he has got a face (and the rest of him, for that matter) that only a mother could love. 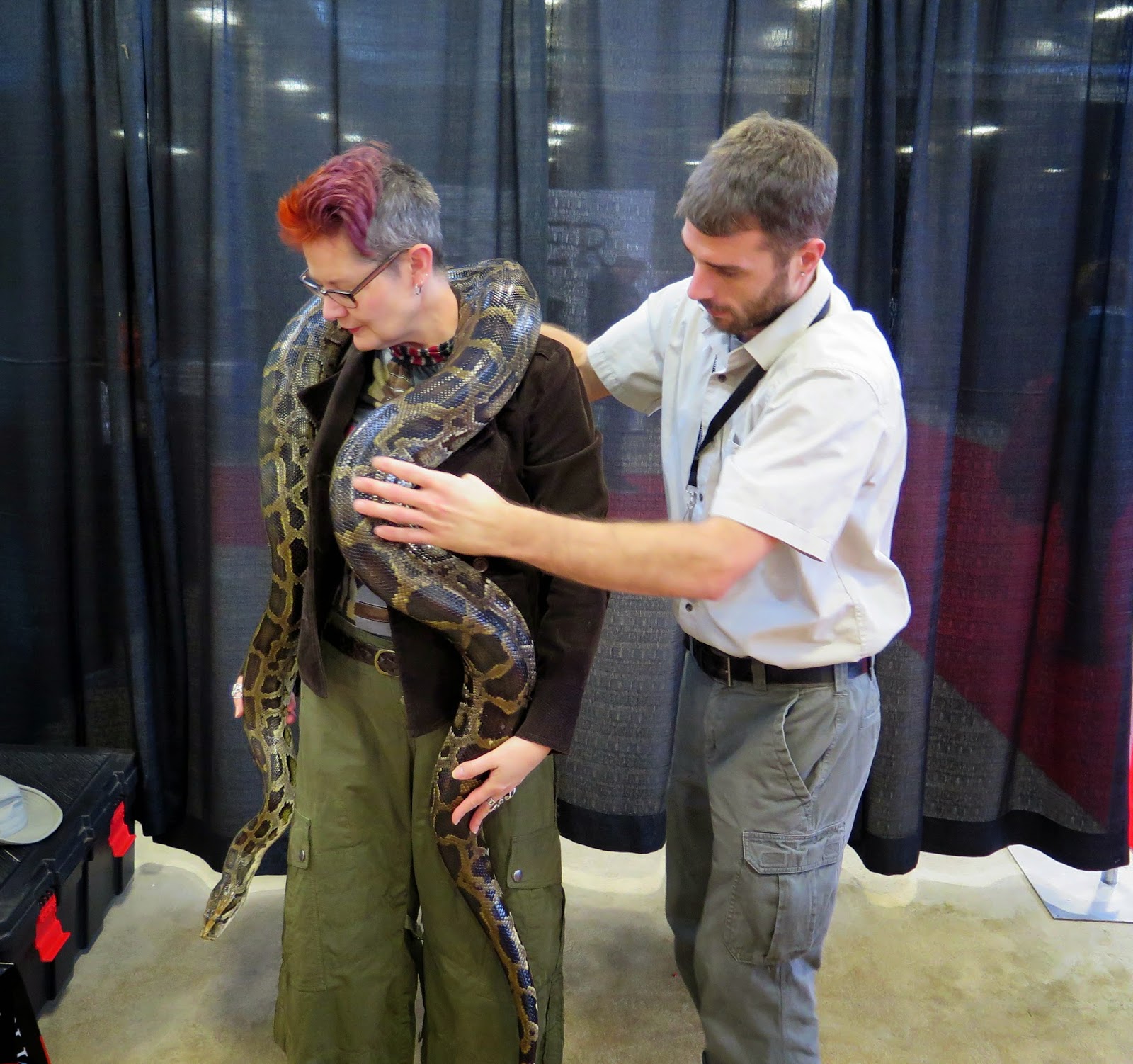 I was very excited to be able to hold Seth, the 50 lb., 10 foot boa constrictor.  While I would not want to unexpectedly find a snake in my house (or outside it either), in controlled circumstances I find them fascinating and quite beautiful.  Seth is the largest boa constrictor I've ever handled, and you can feel every one of those 50 pounds across your shoulders.  He is 18 years old, and has a very calm temperament (no doubt because he is well-fed).  Of course, someone in group of people who had gathered to watch had to ask what he eats and I had to plug my ears so as not to hear the answer (rats, sigh). 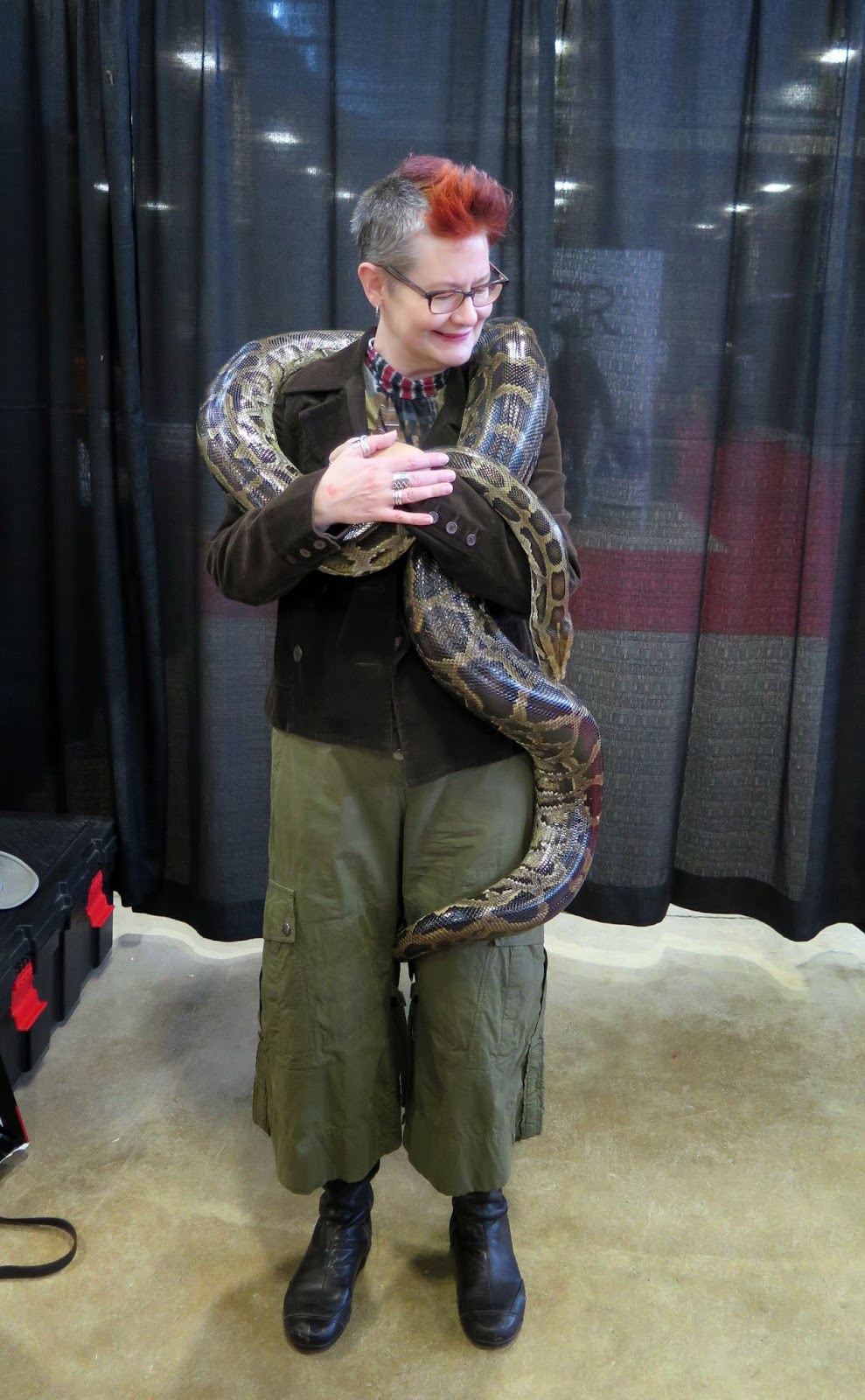 That is the face of a happy woman.  Perhaps I was a snake-charmer in a former life?  It's an added bonus when the snake you're holding coordinates with your outfit. 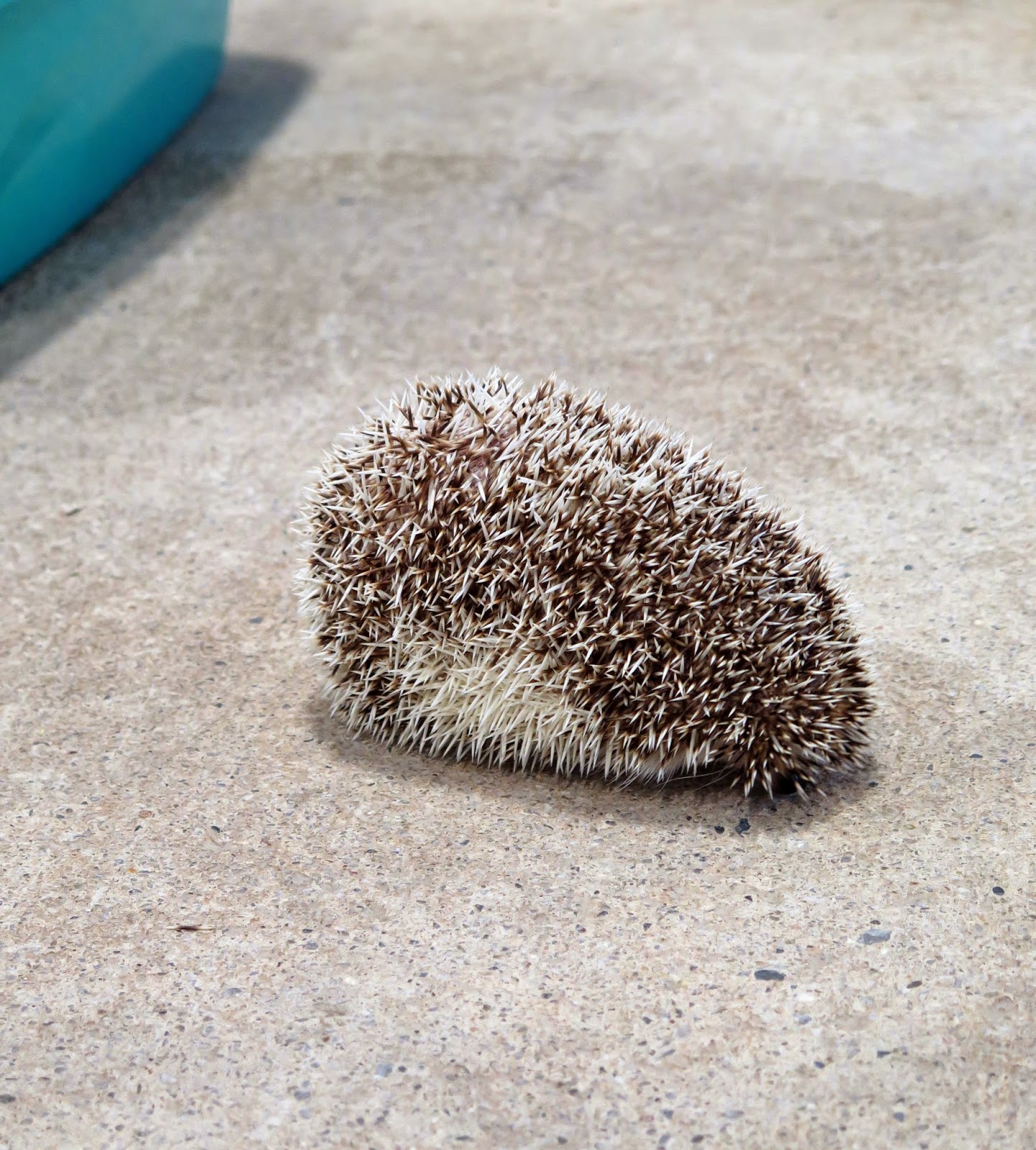 5 points to anyone who can guess correctly what this is.  Hint:  It's not a prickly tribble 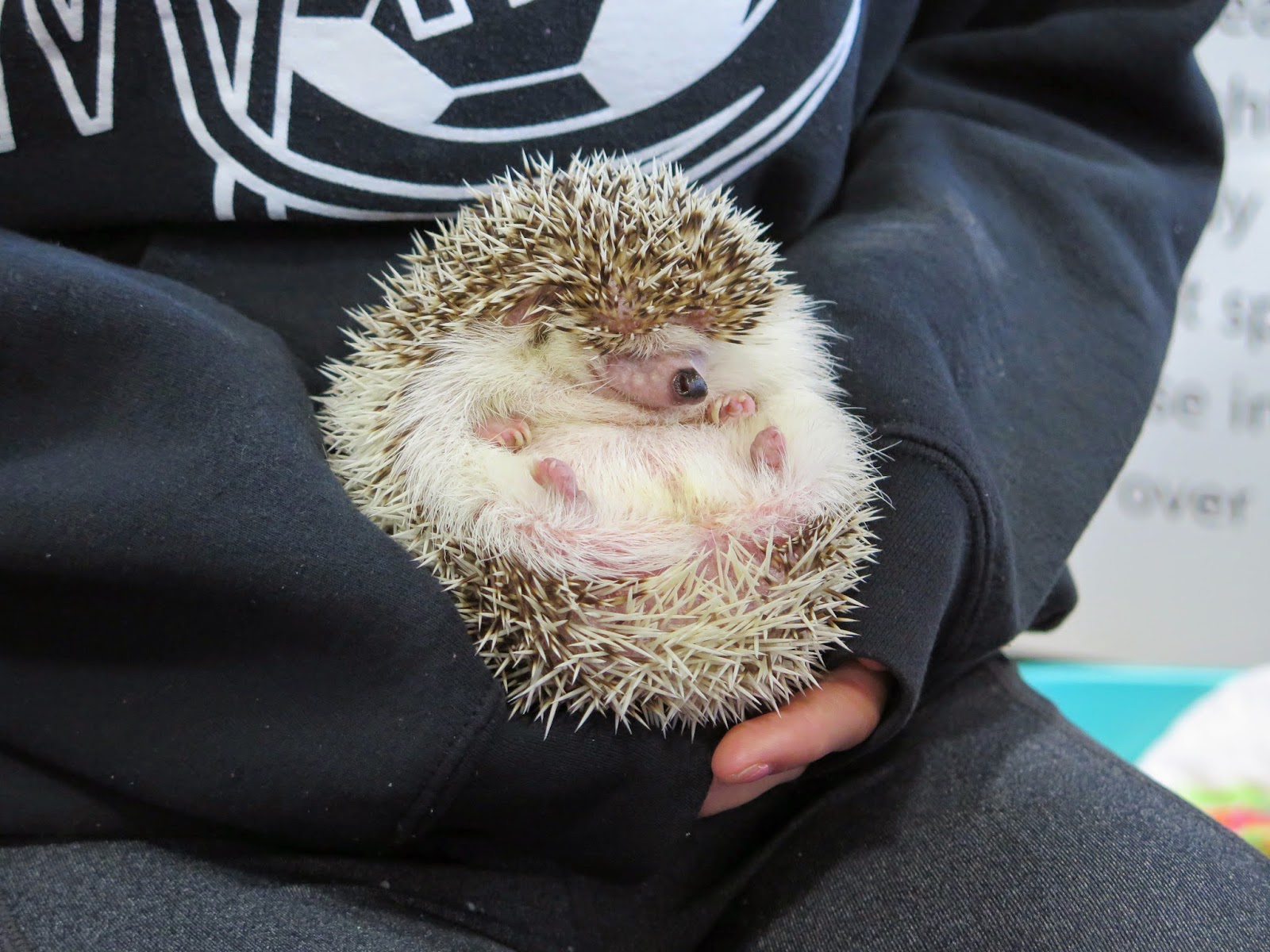 After the snake, this little guy was a bit of an anti-climax, but I had always wanted to see a hedgehog up close.  He was a little freaked out by all the noise and smells so he spent most of the time curled up in a ball on his owner's lap.  That nose!! 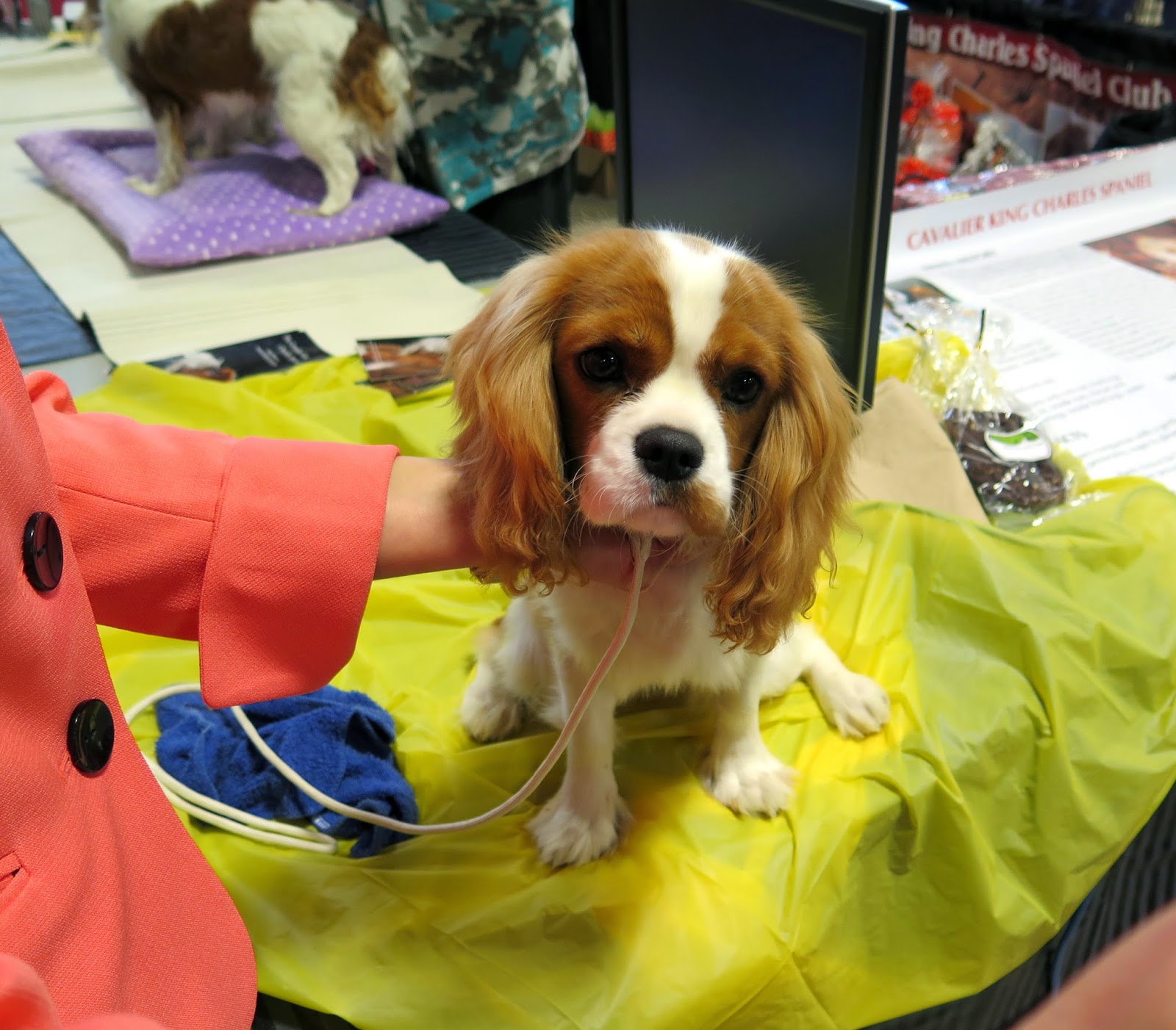 This little doll, a Cavalier King Charles Spaniel, is named Audrey.  She was part of the "Breeders' Row" where you could learn about different breeds of dogs.  If I was going to get a dog, my first choice would be to rescue one from a shelter.  The downside of that is you don't know what you're getting, and when allegies are a major consideration, that can be a deciding factor.   I fell in love with a Barbet, a medium-sized breed I had never heard of, that has a woolly coat that doesn't shed, making it a good choice for people with allergies.  The female Barbet at the show was very friendly and loved being snuggled.

The Purina National, an annual dog show that takes place in partnership with Canadian kennels,  offered the opportunity for some entertaining photos behind the scenes of dogs being washed, dried and fluffed before taking their turn in the ring.... 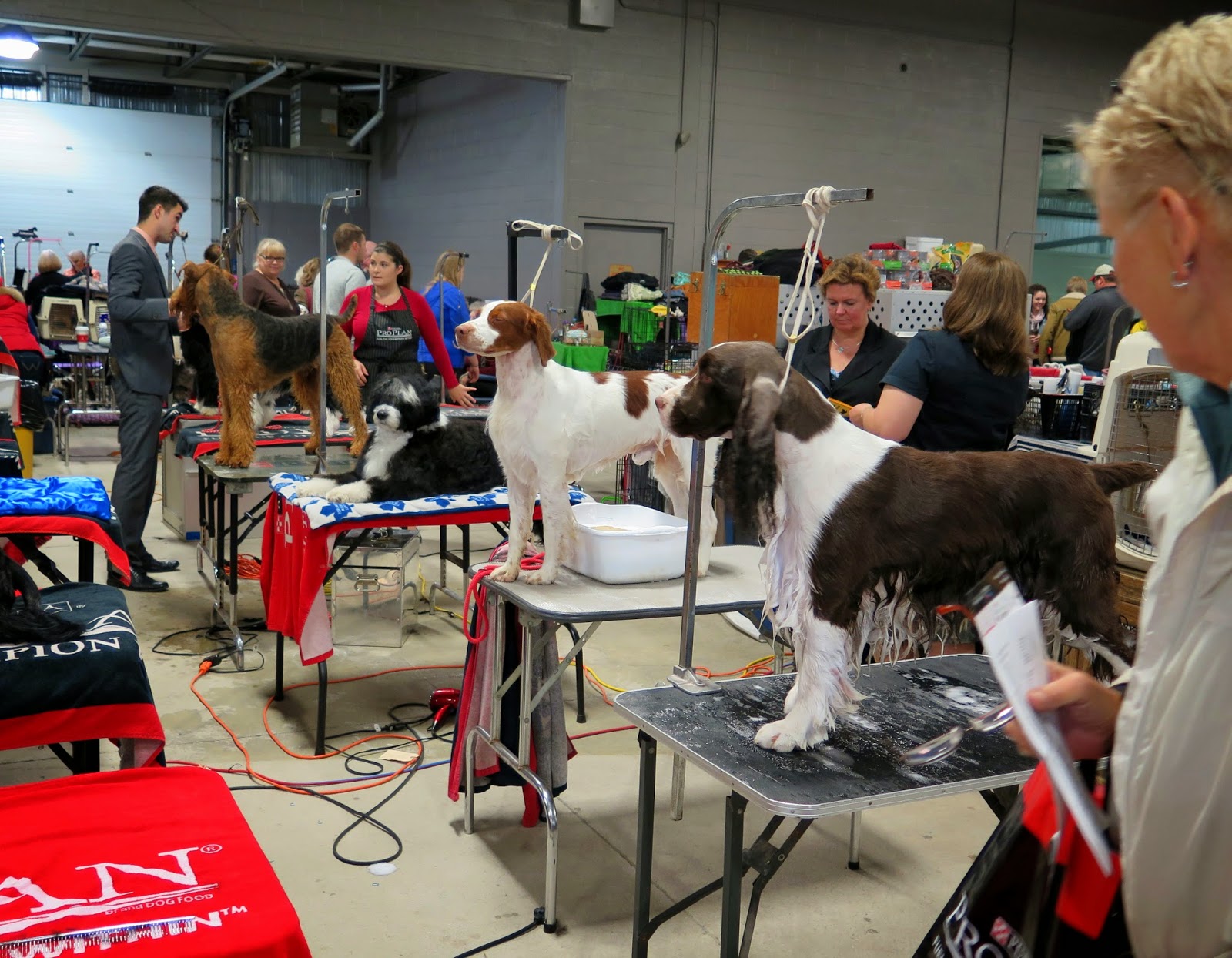 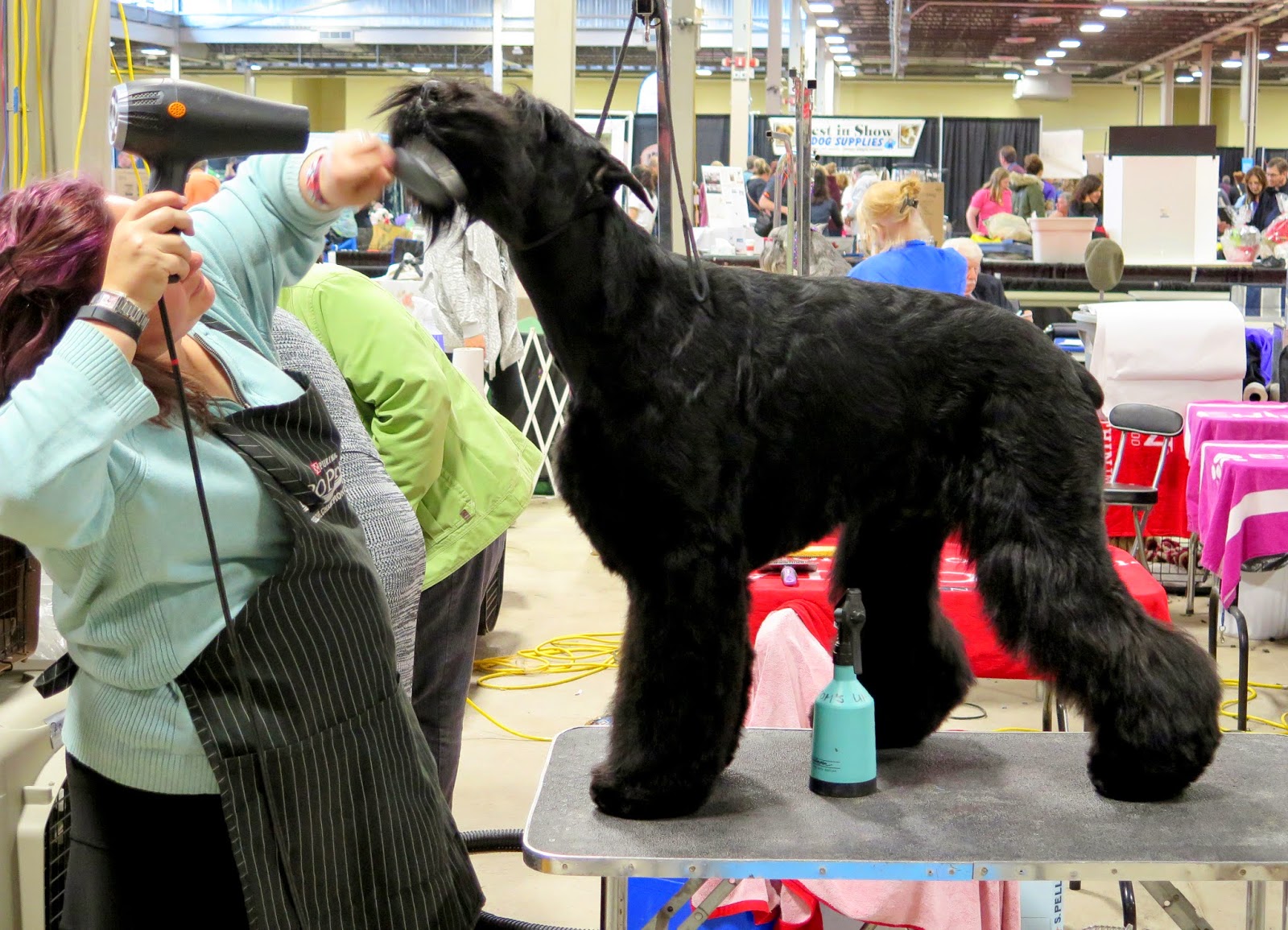 Dry (the dog seemed to really be enjoying this) 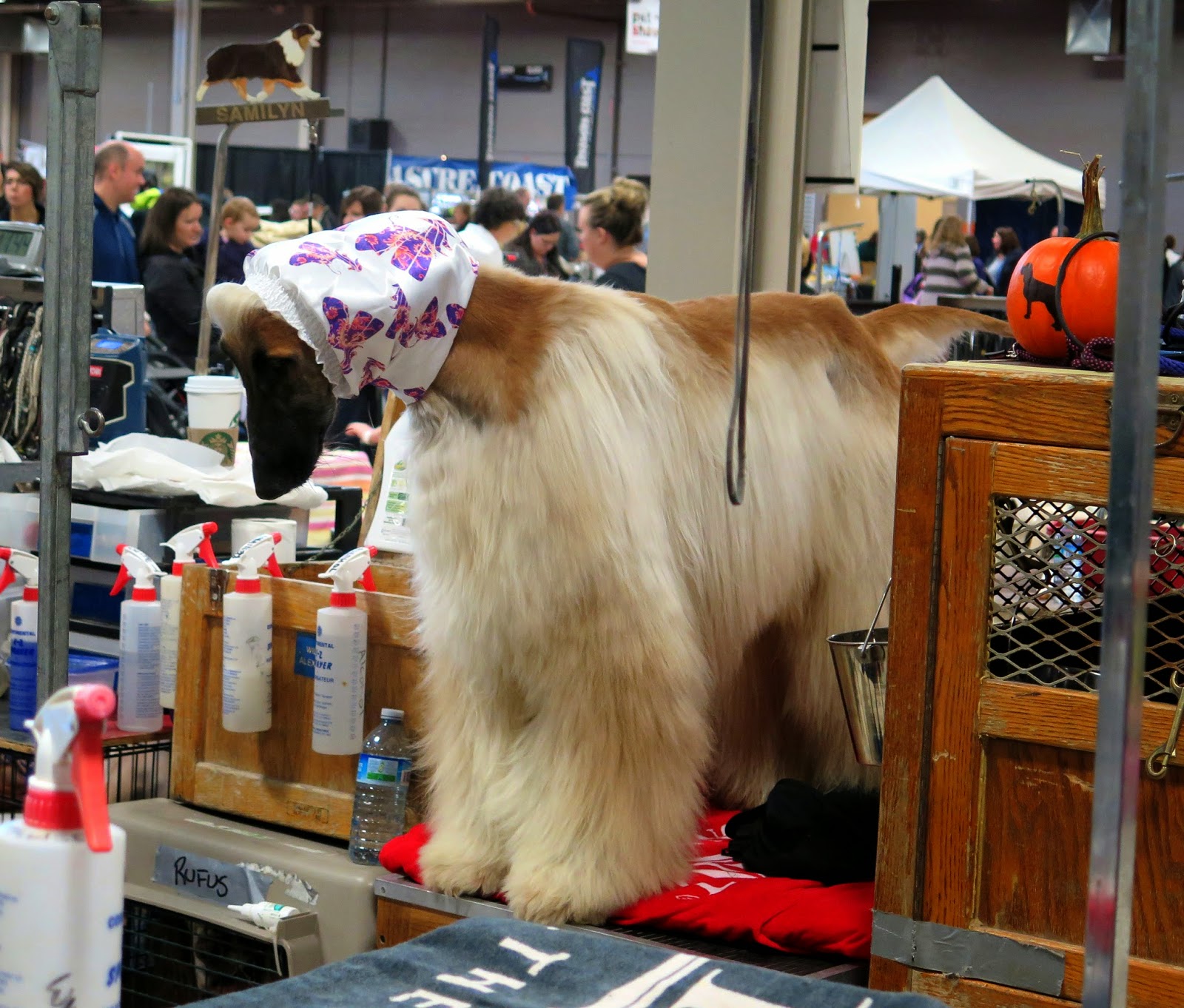 ...and Fluff.  I would hang my head too if I was forced to wear a plastic Babushka 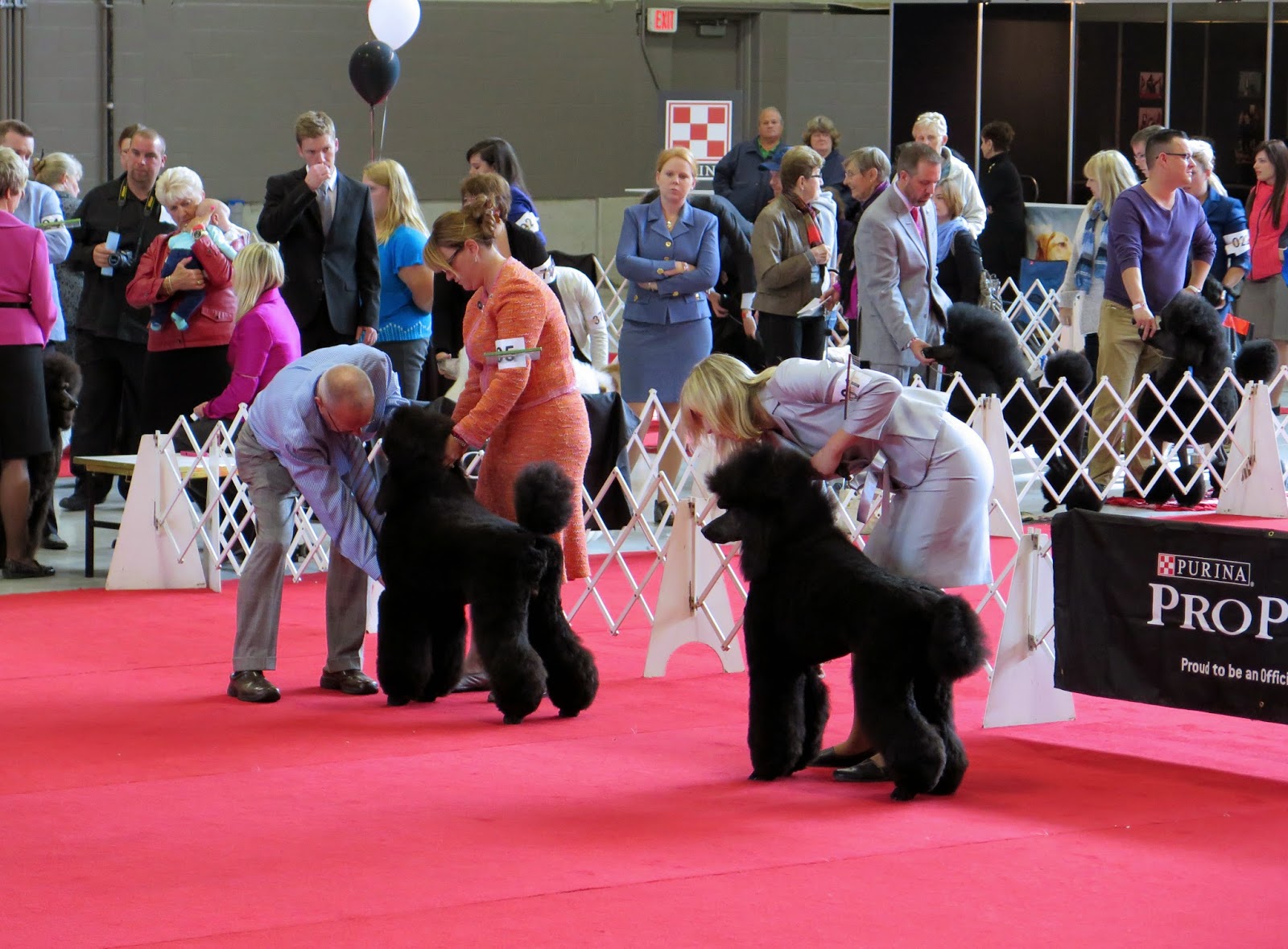 There were plenty of fancy cats to be ogled at the PAWSitive PAWS Cat Show, also happening over the weekend.   My favourites were the Rag Dolls, with their distinctive blue eyes and laid-back temperament.   Unfortunately, they are also very expensive, and if I was going to adopt a cat, there are all kinds of cute ones waiting to be rescued at the Humane Society. 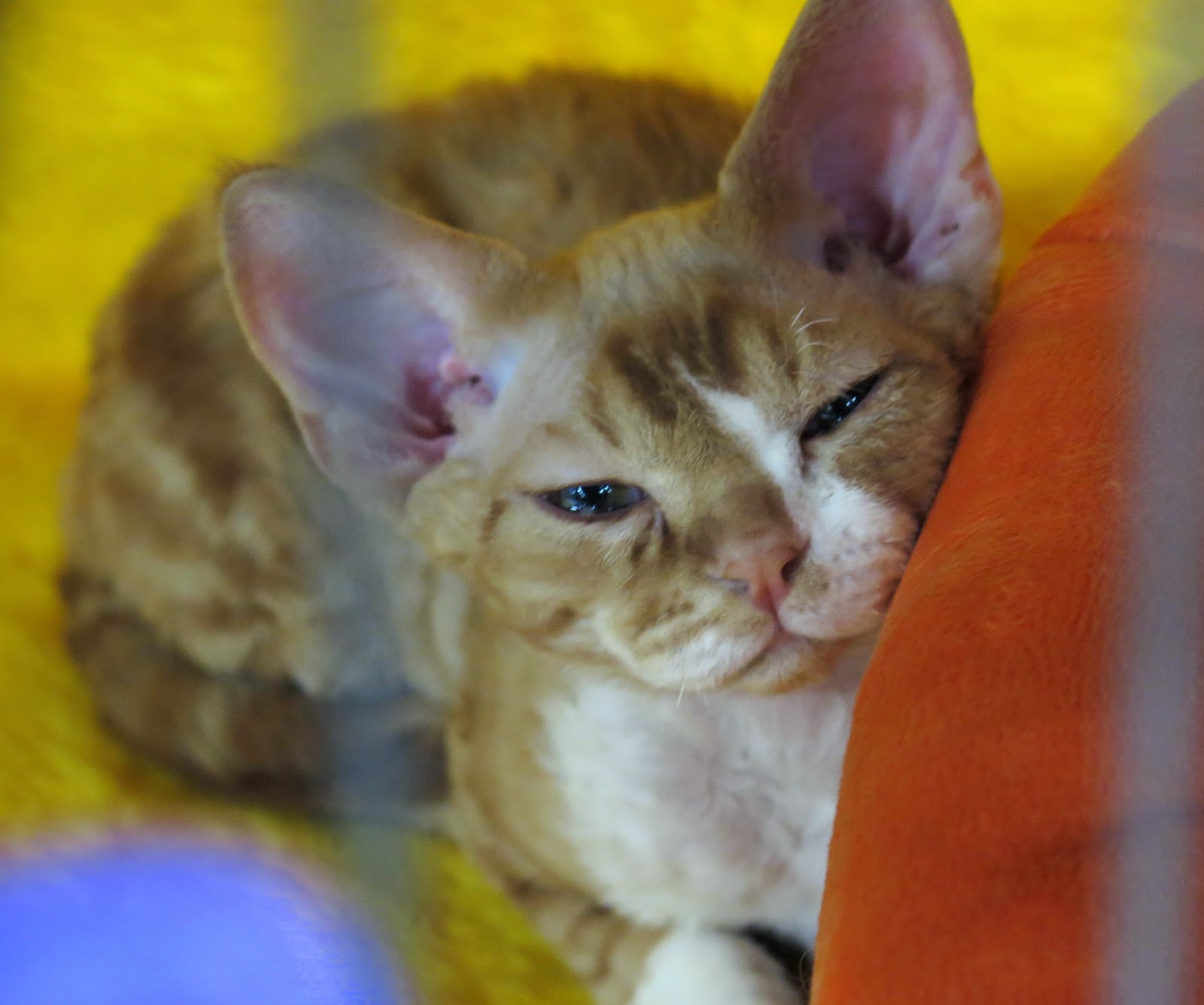 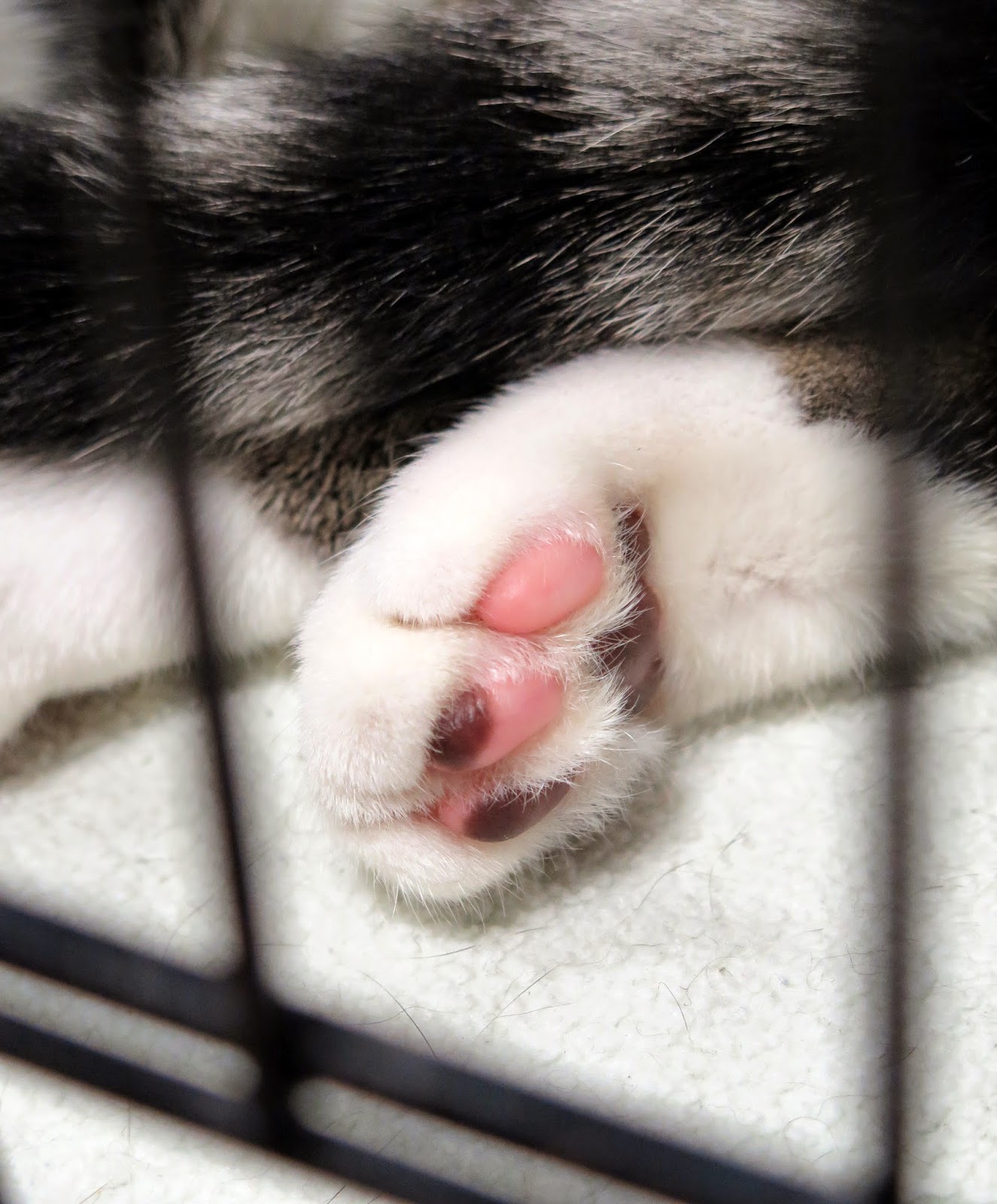 The show was loads of fun, and the Reactine did its job (although I was very sleepy by the time we left the show).   I miss my little rat, so it was very therapeutic to snuggle some critters.
Posted by Forest City Fashionista at 10:20 AM