Paintings and Photographs and Comics, Oh My!!

It was an art-full weekend here for me, beginning with the Friday night opening of two exhibits at the McIntosh Gallery, located on the campus of Western University.  The idea of going back to the place where I work on a Friday night was not particularly appealing, but sometimes one makes sacrifices in the name of art.   The gallery was packed with art fans and at times the noise level was deafening, so I didn't spend as much time as I would have liked examining the art, but I did get some photos of my favourites pieces.

The smaller gallery space housed a three-decade survey of photographs taken by London-based photographer Rob Nelson, who has had a successful, and influential career in portrait and fashion photography, shooting for magazines like Saturday Night, Interview, Flare, Toronto Life, and Chatelaine. Nelson uses a minimum of equipment, and prefers to shoot in natural light. 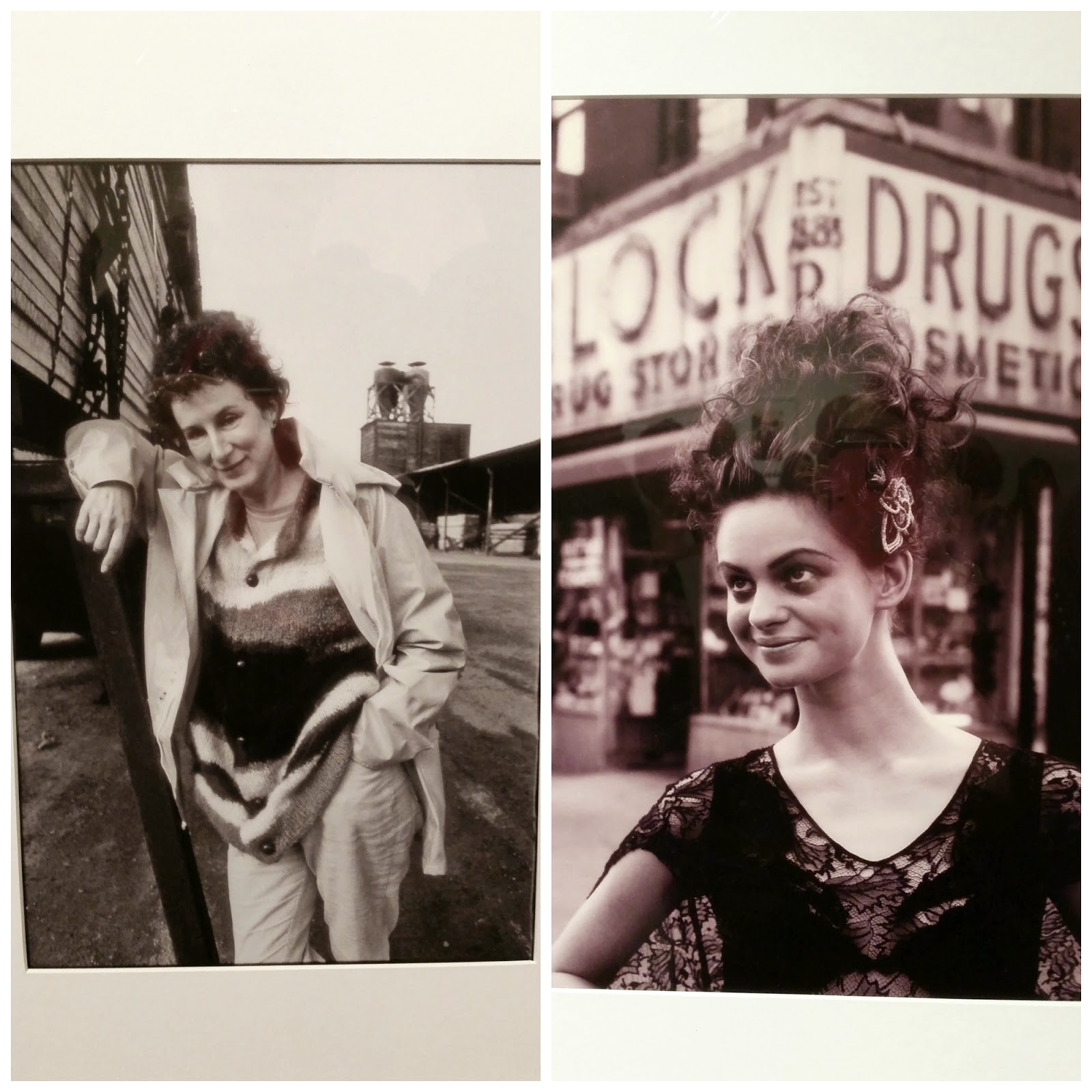 (Left)  Nelson shot the photo above of Canadian author Margaret Atwood at a lumberyard after spending the day with her driving to her cottage in northern Ontario  (Right) I liked this photo because it had the feel of a casual street style shot.  A friend who was also looking at it said she had taken a photograph when she was in New York this summer with the same drug store in the background.  There is a timeless quality to the photo; it could have been taken yesterday, it could have been taken 30 years ago.

The exhibit in the larger space, titled "Another Perfect Day" featured a selection of large paintings by Montreal artist Janet Werner. 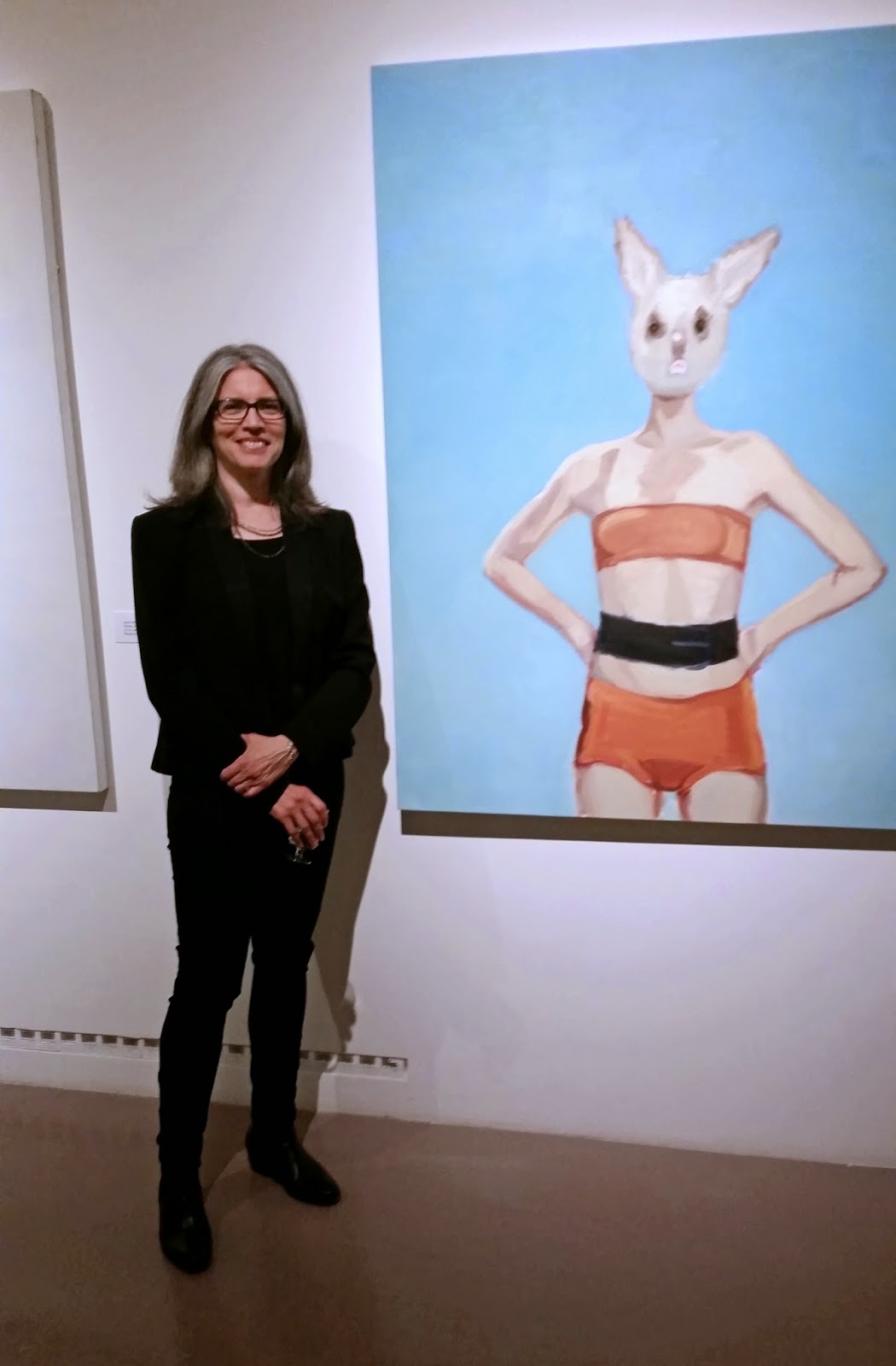 Werner, who teaches in Concordia University's Faculty of Fine Art, next to her painting "Bunnyhead" 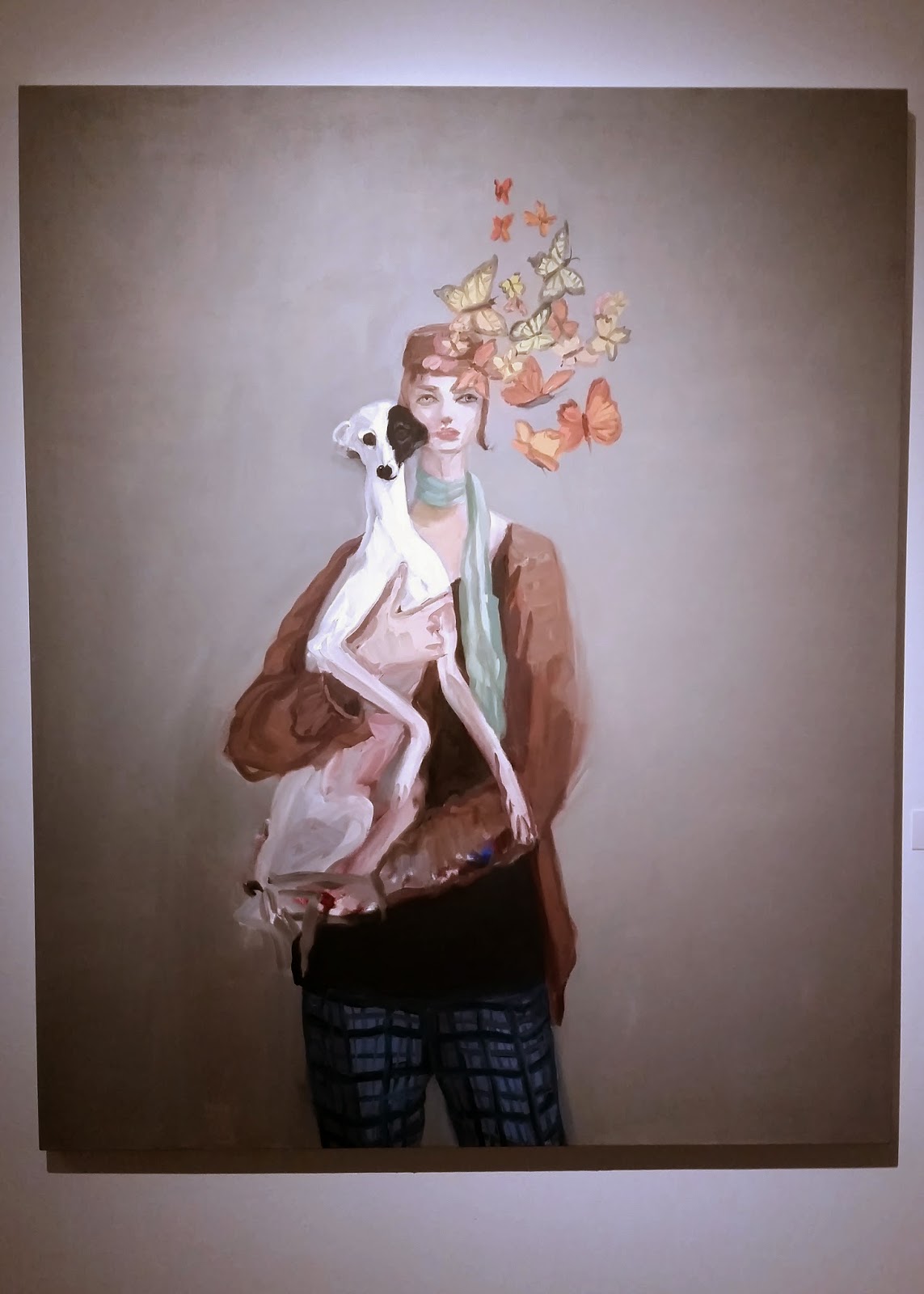 "Mile Ender", above, was one of my favourite paintings in the show 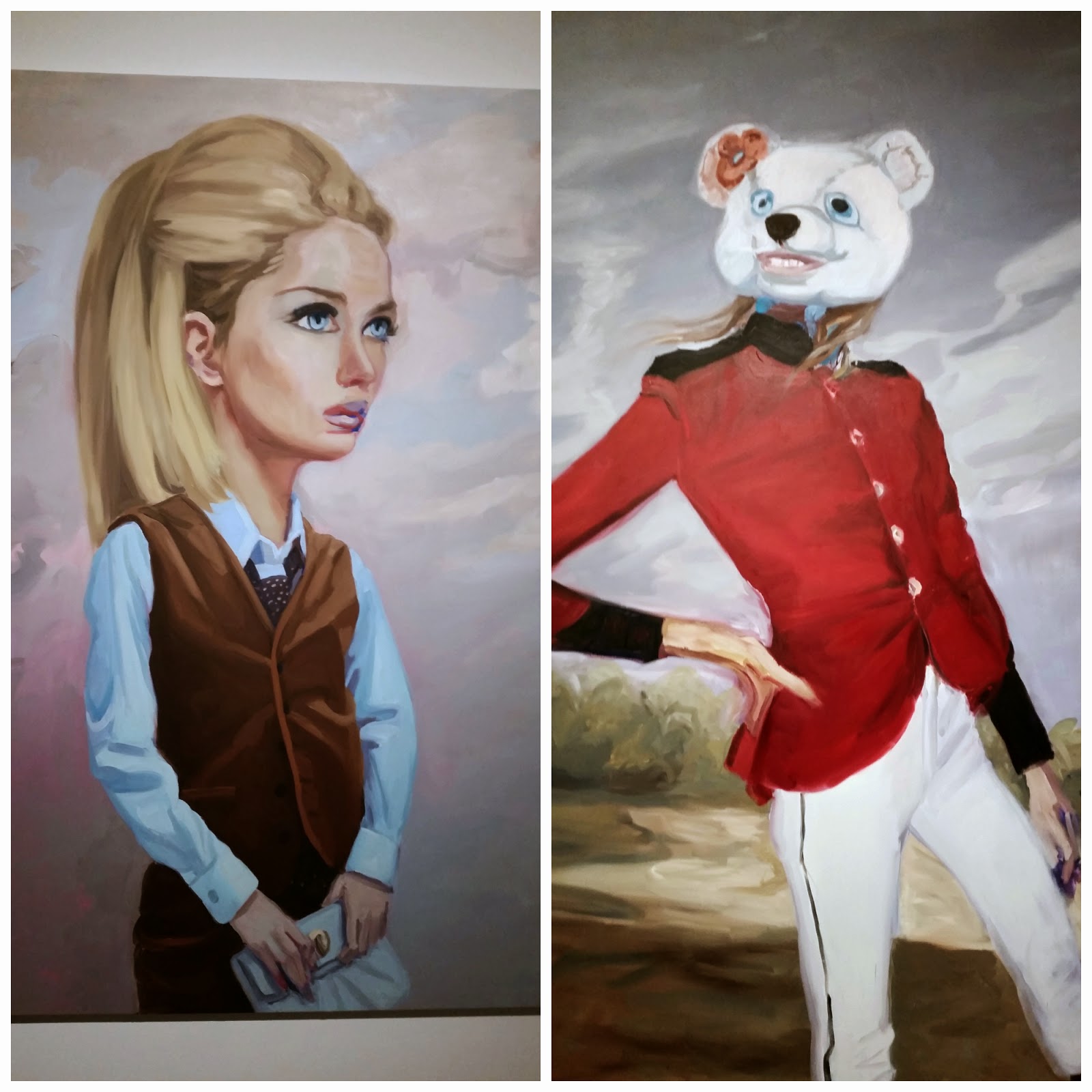 
I was intrigued by Werner's play with proportion and the choice of colour palette in her fictional portraits.  The large paintings are a fascinating mix of the beautiful and the grotesque, and the size gives a monumental feel to the subjects.


Rob Nelson: Photographs 1977 - 2014 and Janet Werner: Another Perfect Day continue at the McIntosh Gallery until November 1

A new exhibit, "Illustrated Story Tellers",  opened at Back to The Fuchsia on Sunday night.  The exhibit features the work of Drew Rausch, Josh Deck, Owen Mackinder, Sarah Legault, Aaron Alexovich. Lovern Kindzierski, and Christina Deljanov, who excel at creating art for the comic book industry. 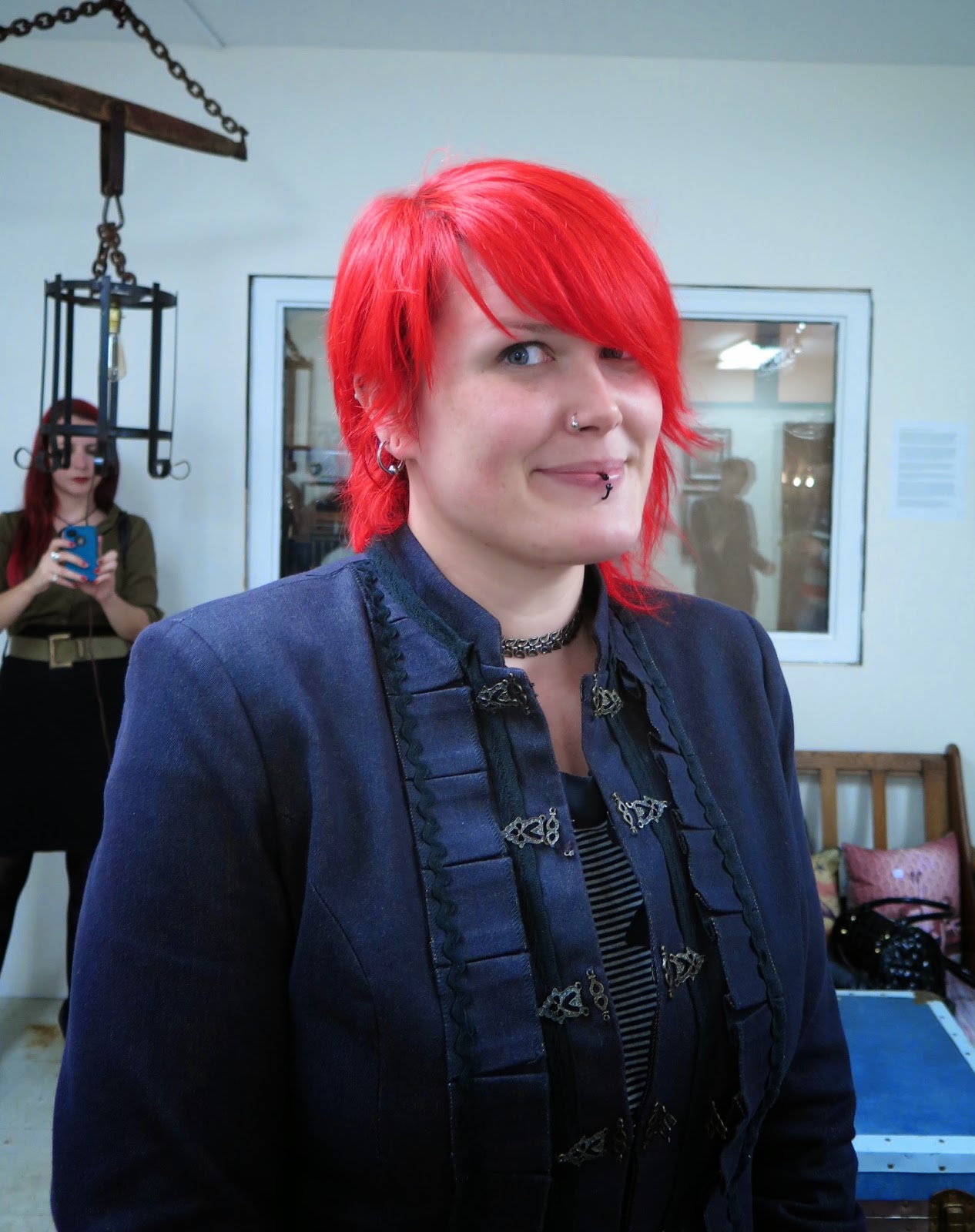 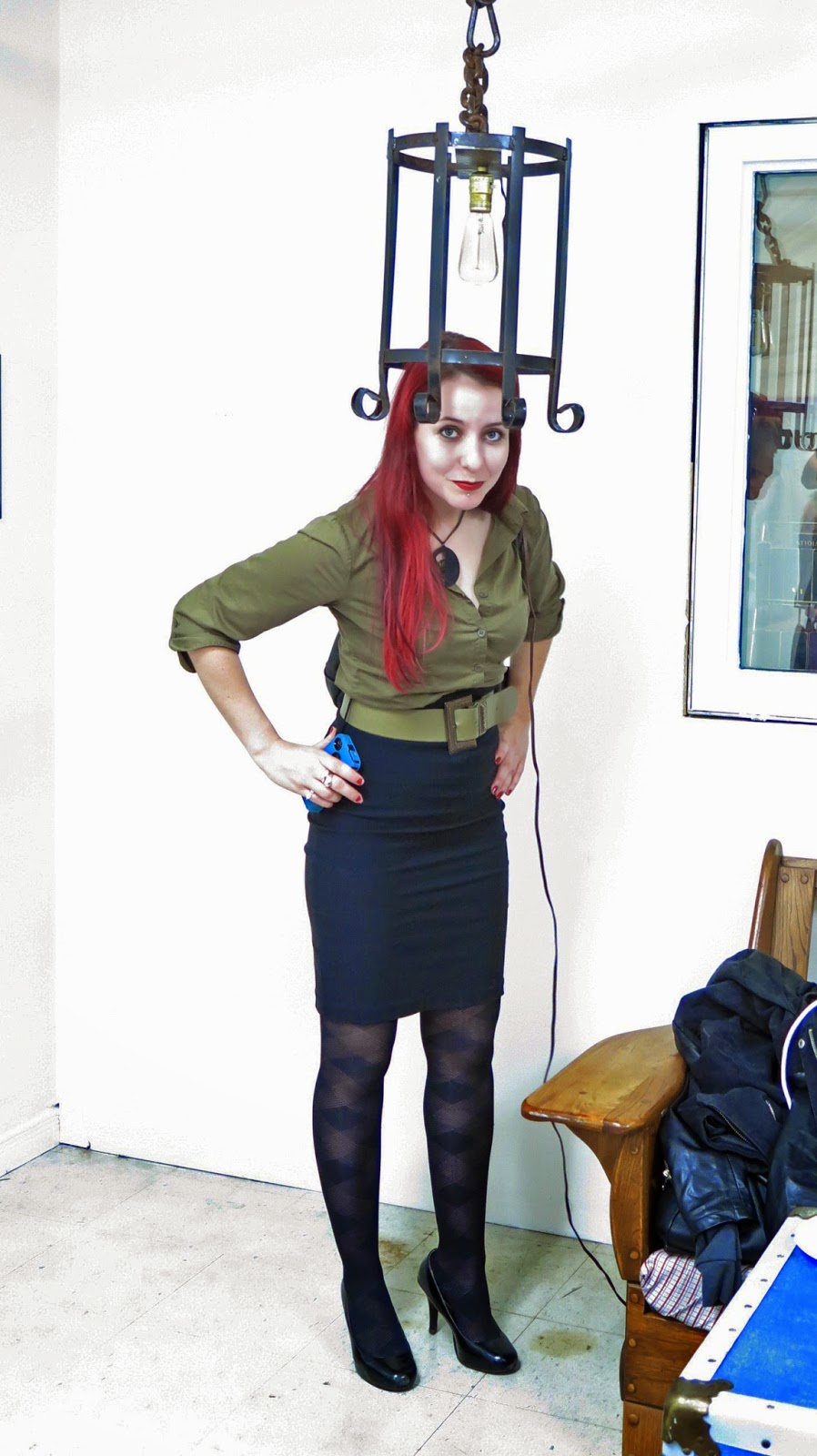 My new camera was doing a few crazy things with light metering, and I ended up with this wildly overexposed shot of exhibition curator Sarah Legault, goofing around with a light fixture she was coveting from Mary's store.  I actually love the effect - it looks like a painting instead of a photograph. 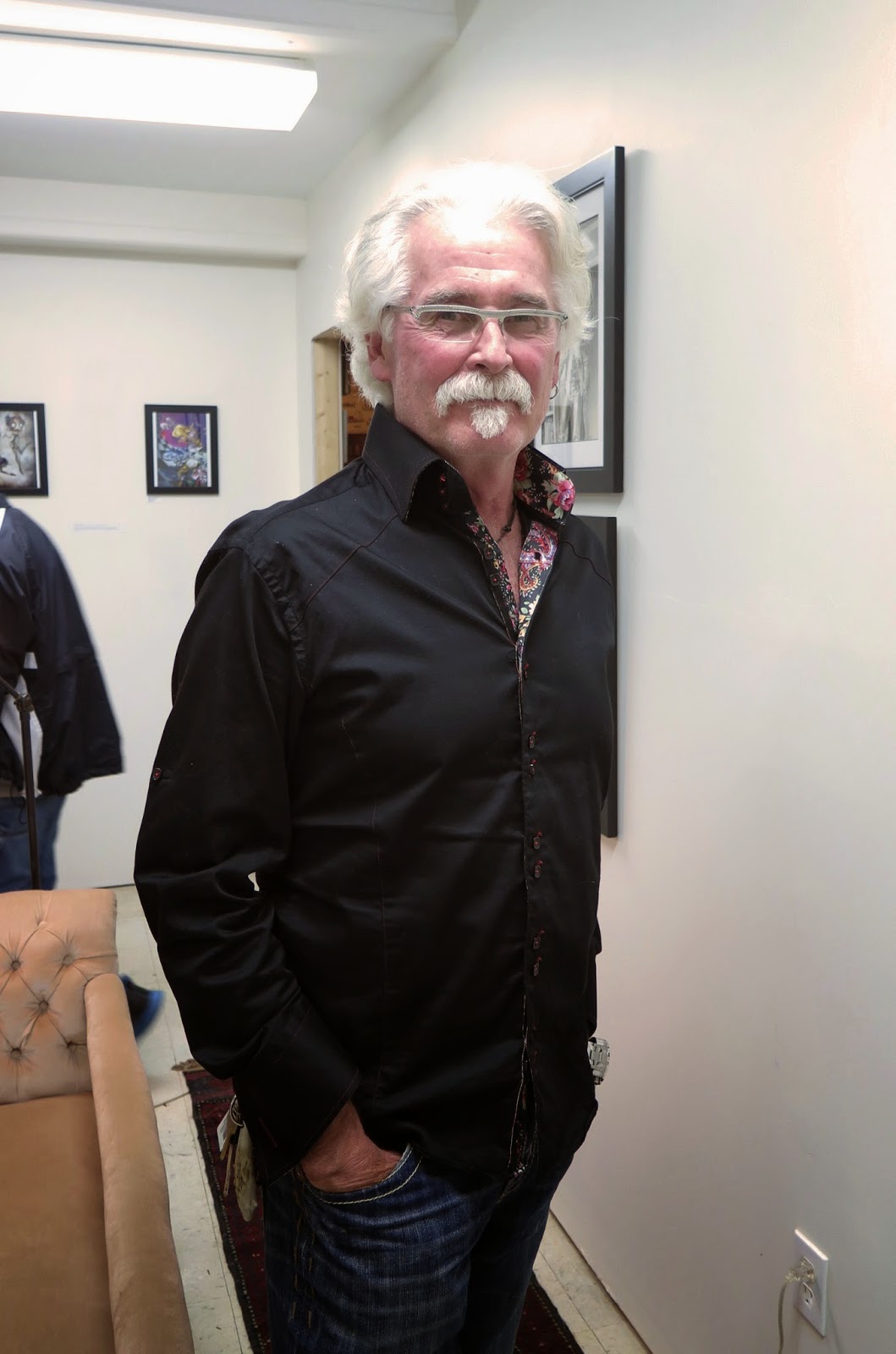 I've known John, in the photo above, for probably 25 years, and he has always been one of the most consistently best-dressed men I've ever met. 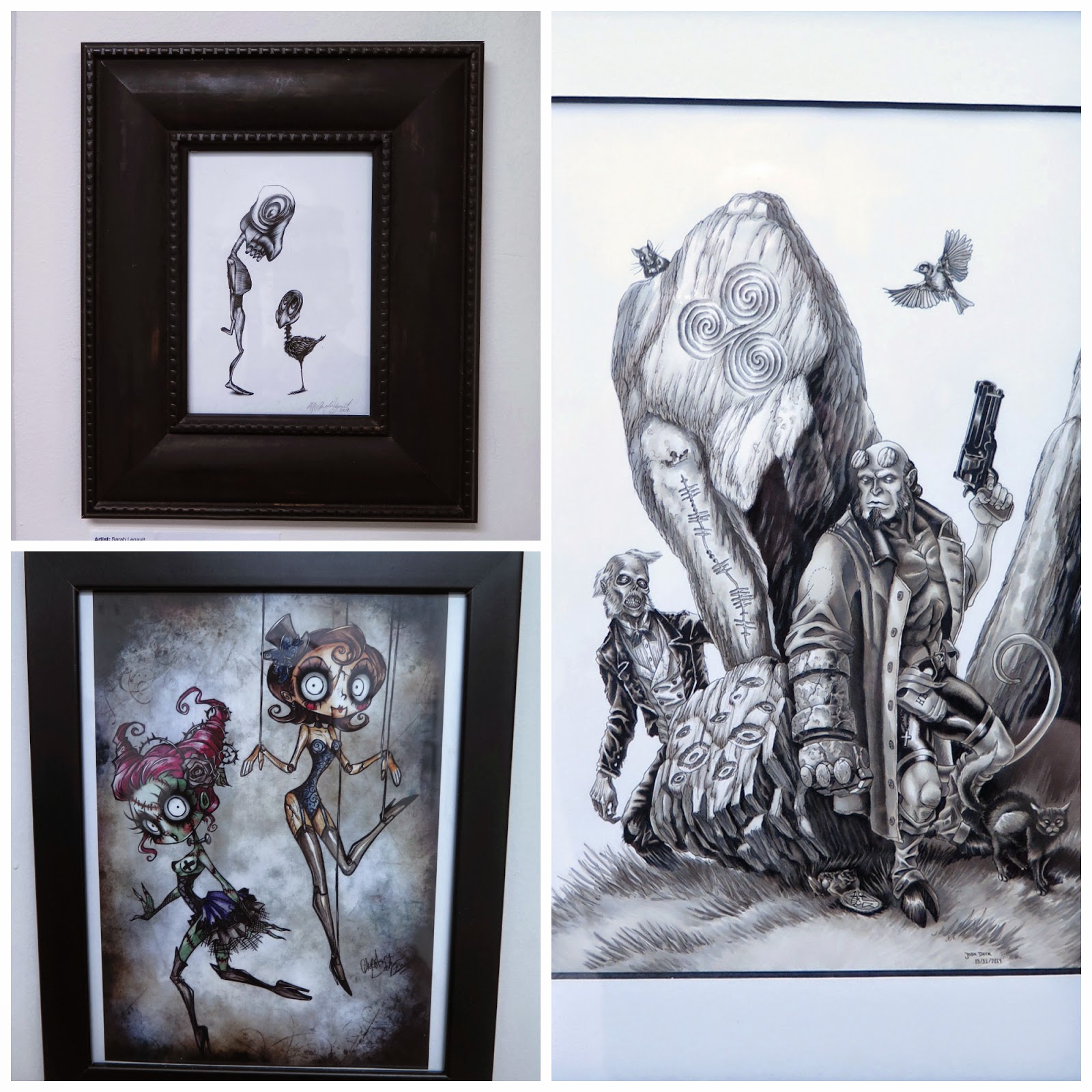 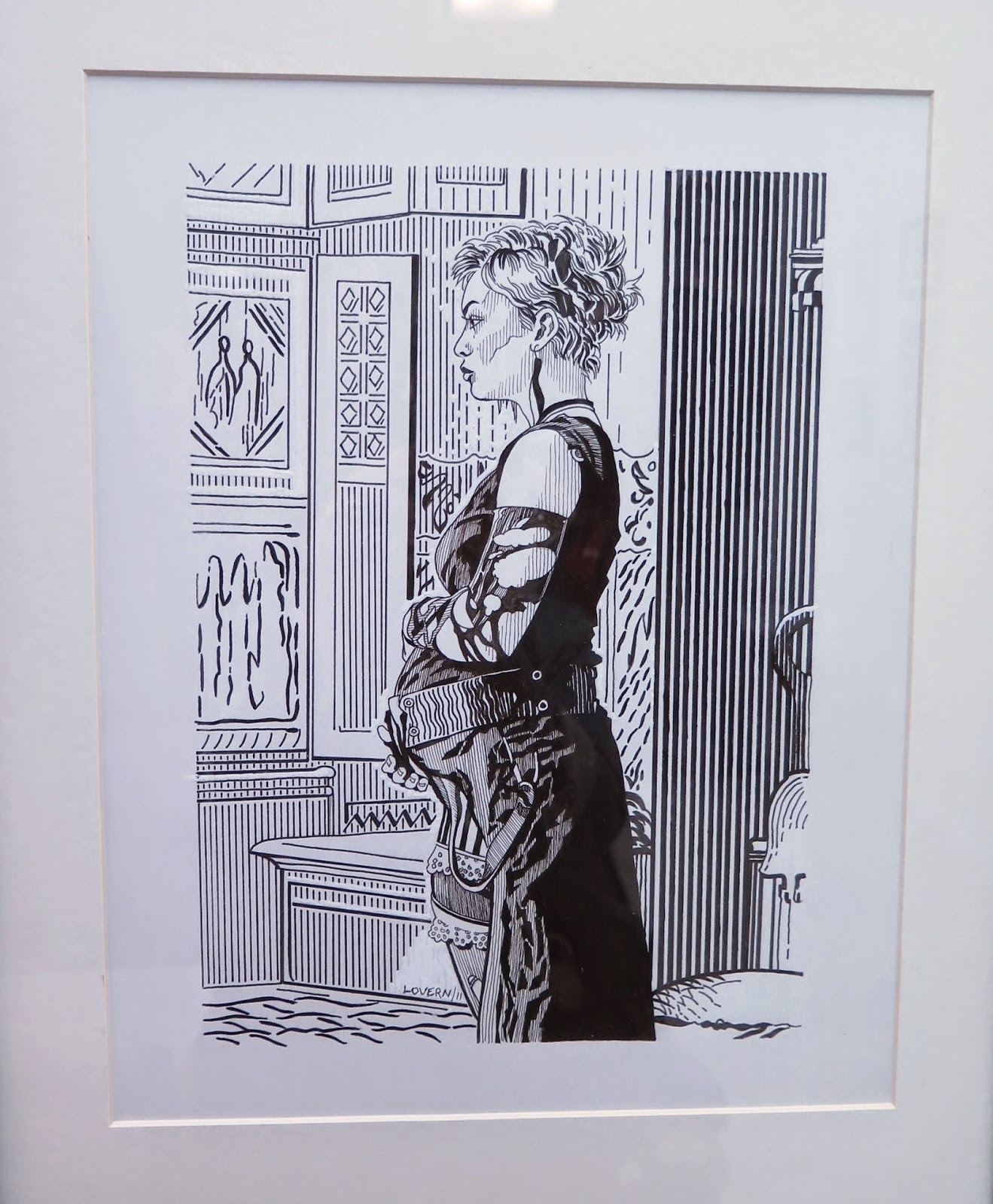 "Pregnant Moment" by Lovern Kindzierski, an original illustration from the story Morella, by E. A. Poe 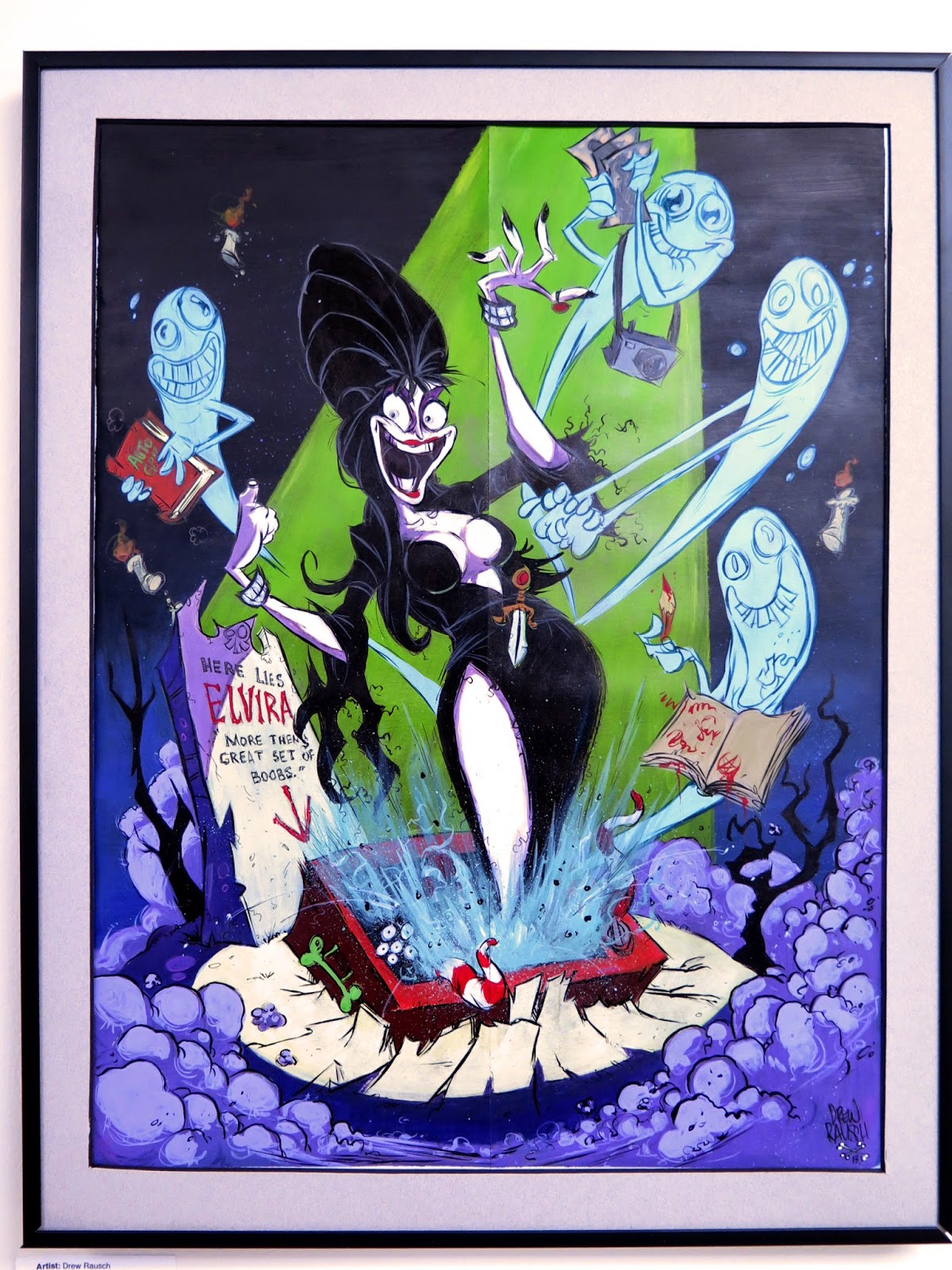 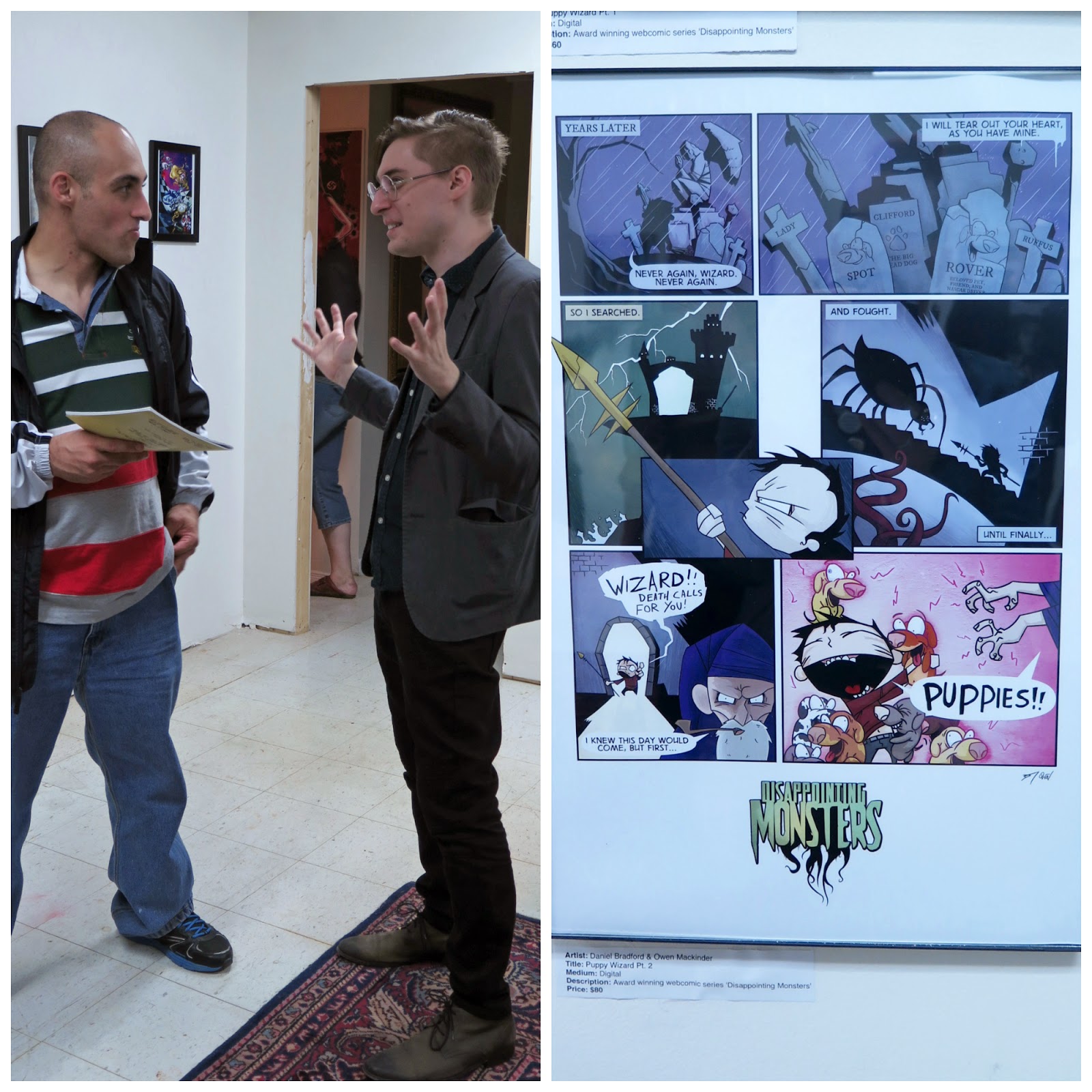 Left: Artist Owen MacKinder (r) talks to a fan at the opening Right: "Puppy Wizard Pt. 2", a page from the webcomic series "Disappointing Monsters" created by Daniel Bradford and Owen Mackinder.  I read through a number of pages from the webcomic, about the adventures of a boy named Gilbert and his imaginary zombie friend, Edison, and it's a whole lot of fun. 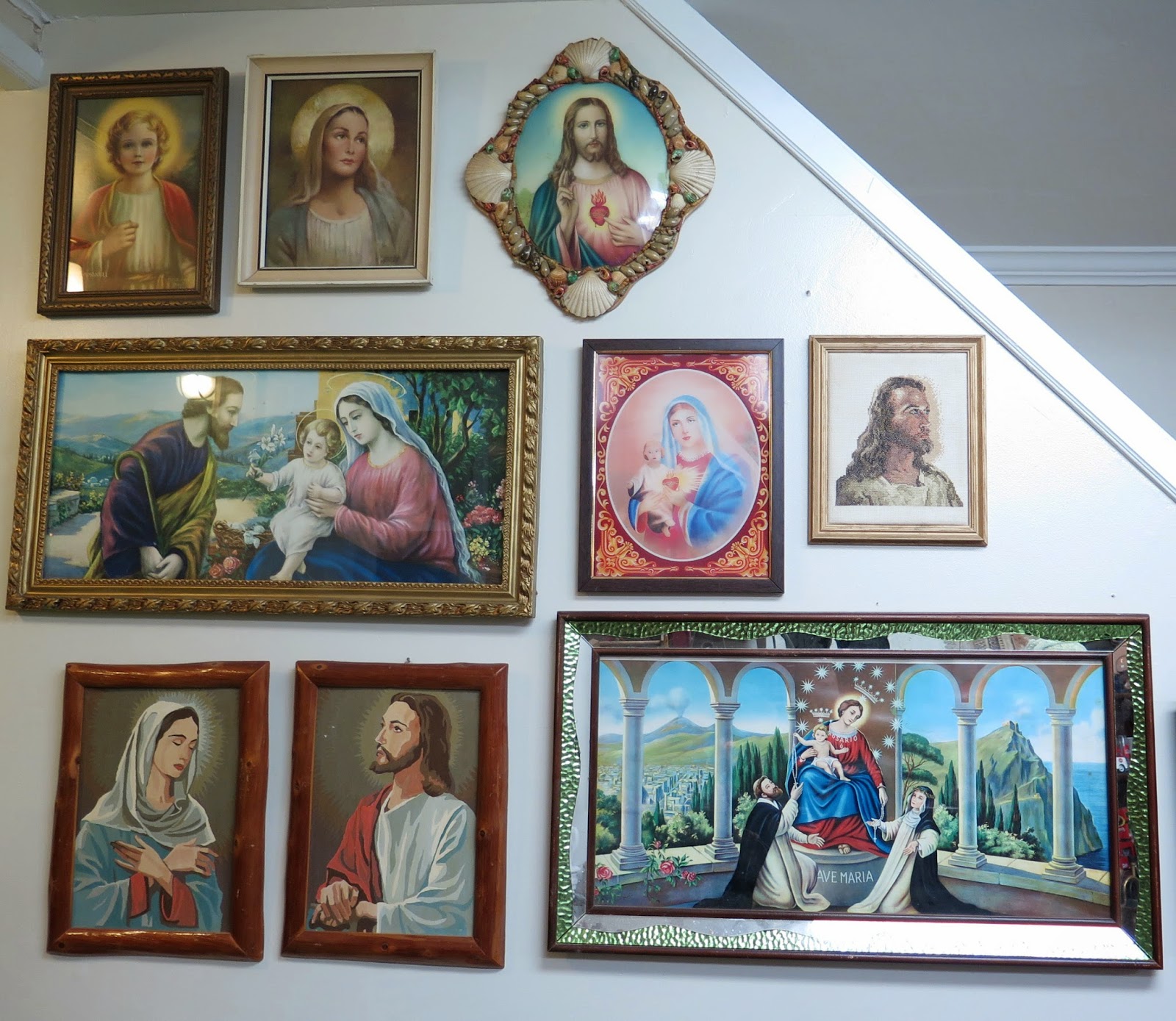 On my out the door, I stopped to admire the impressive Wall of Jesus in the store.  The exhibit "Illustrated Story Tellers" continues at Back to the Fuchsia until October 12th.  The hours are posted on their Facebook page.


In between these two exhibits, I saw the acclaimed documentary Finding Vivian Maier, about a Chicago nanny who shot hundreds of thousands of amazing photographs that no one ever saw, until a young photographer, John Maloff, discovered her negatives at an auction house in 2007.  It is a fascinating portrait of an enigmatic, damaged woman who was also a brilliant street photographer.  If it comes to a theatre near you, I urge you to see it.
Posted by Forest City Fashionista at 10:39 PM