Just to be clear, the title of this post refers to my dressing philosophy this summer, NOT the magazine of the same name, which promises to make your life easier, and to that end, contains articles about such topics as;  "why laughing is good for you and how we can do it more often", "build sand castles like a pro", "decorating with gray" and "the best tropical prints for your body type" (articles that have appeared in the last three months).  Magazines like this make me feel hopelessly disorganized and domestically useless, which is why I don't buy them, no matter how tempting it may be to read 10 Tips to Becoming a Morning Person (because I'm not) and How to Make Salted Caramel-Chocolate Pecan Pie (because it sounds sooooo yummy).

So I will stick to what I know, which is inexpensive, easy and fun summer dressing, and lately, it's all been about one simple piece. 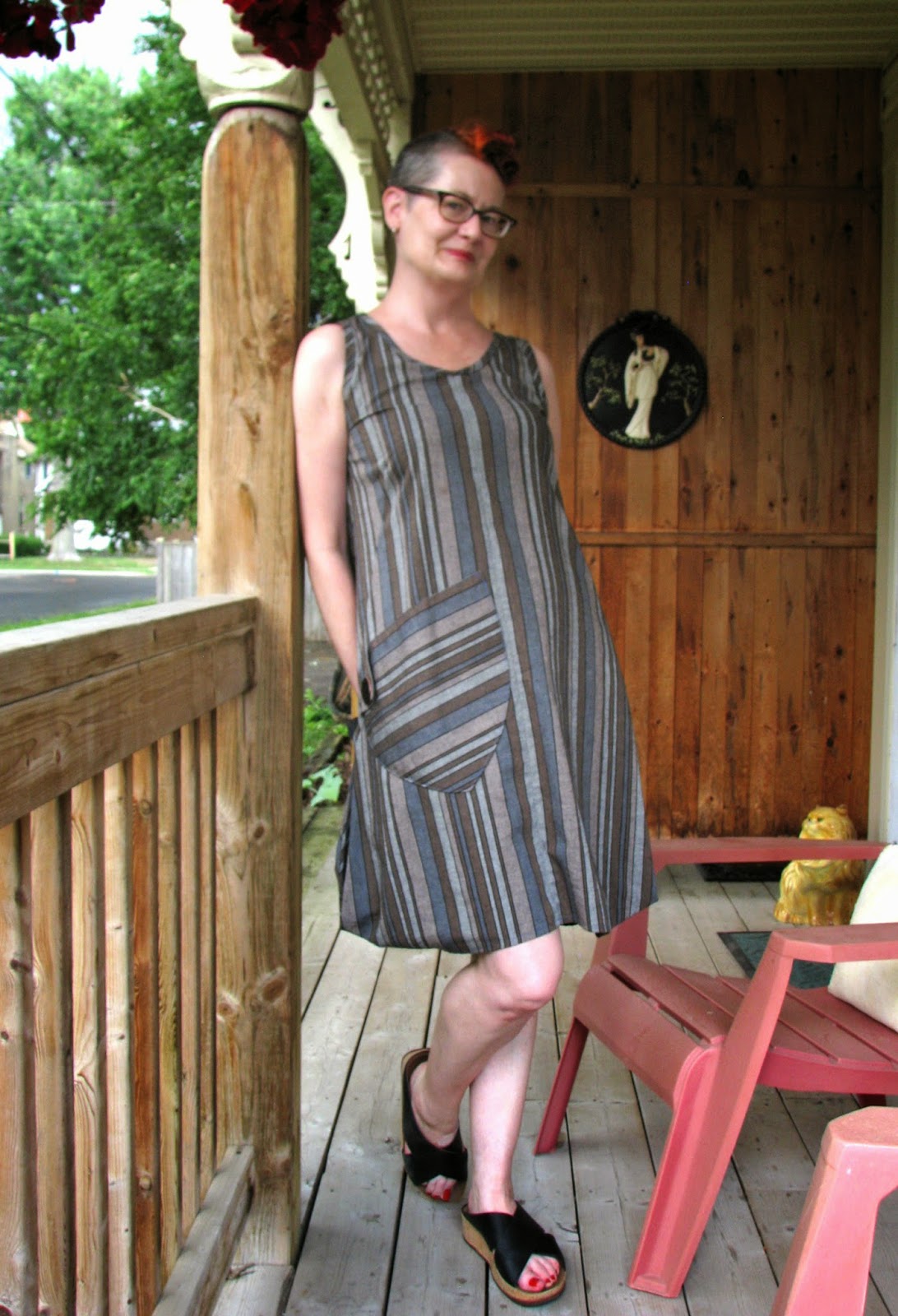 I've had some pretty good luck at the second-hand stores over the last couple of weeks.  I found this streamlined cotton dress, made by Toronto-based company, Olio Eco and Organics, at Value Village.  There's no label except for the size tag, but I saw the same dress in a different pattern at their booth at Sunfest this past weekend, selling for around $75.   I paid $12 for mine so I felt pretty good about that.  The colours aren't particularly exciting, but I love stripes and the simple shape with big pocket and side drape detail make it the best thing to pull on when it's really humid. 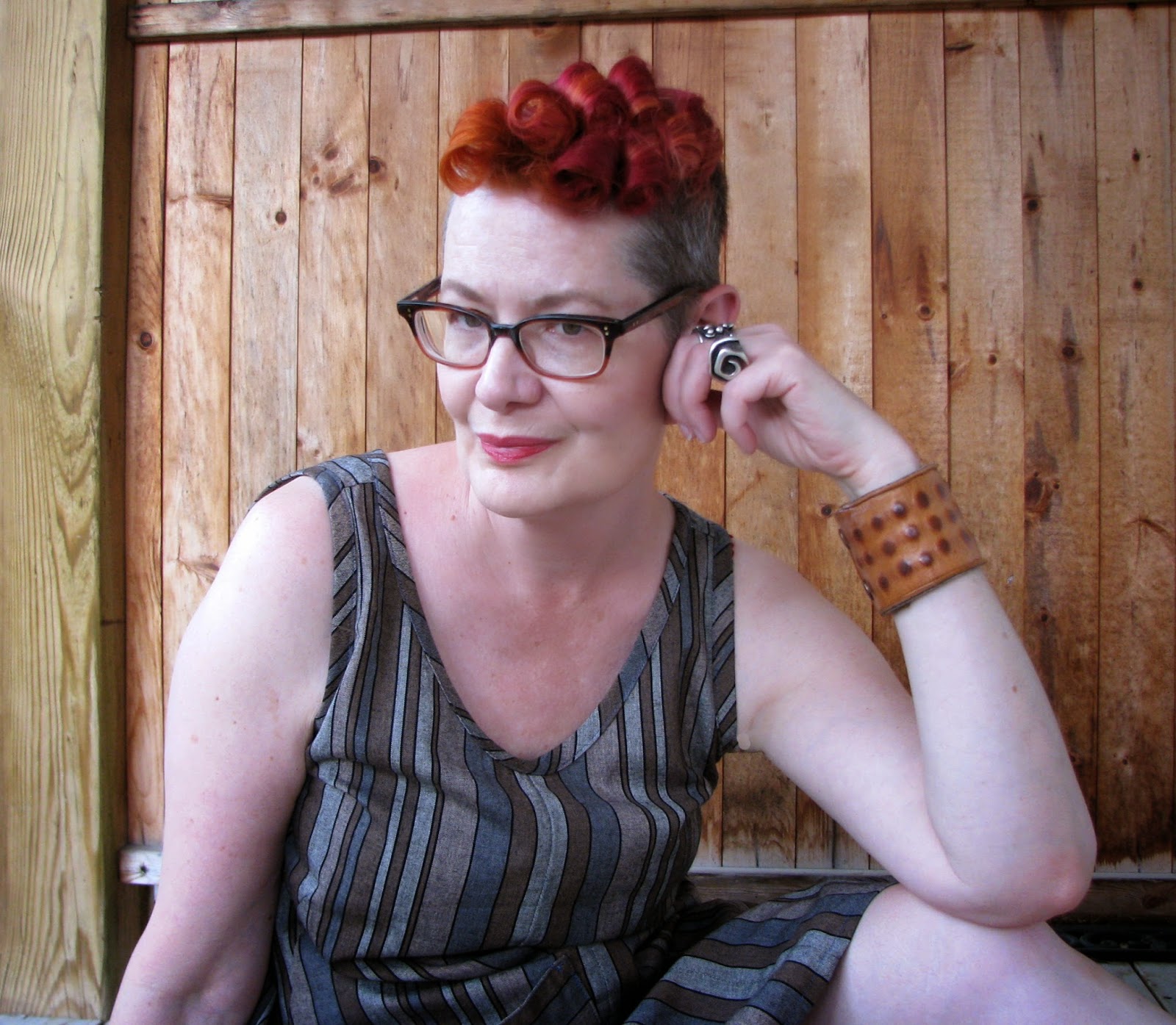 This photo doesn't do justice to the dress, but it shows off my perfectly-curled curls of which I was very proud - they lasted three days, thanks to the wonder of hairspray. 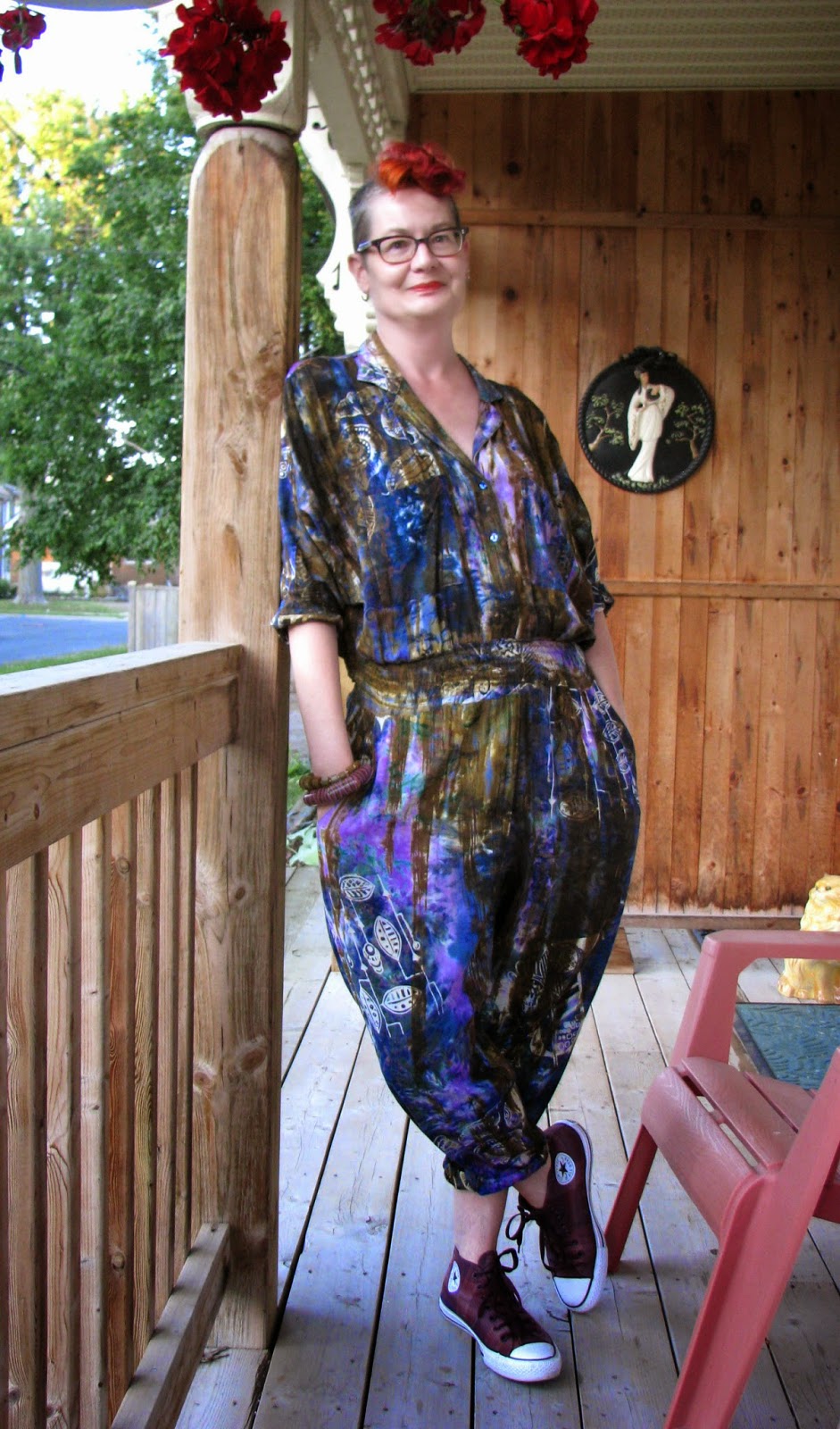 I purchased this jumpsuit at Lovesick, a local vintage store, about two years ago.  I still love the colours and how you feel like you're wearing your pajamas, but you're not (unlike the girls I see on the bus, who actually are wearing their polar bear print pajama bottoms).  Again, throw on one piece,  shoes and jewellery, and you're good to go. 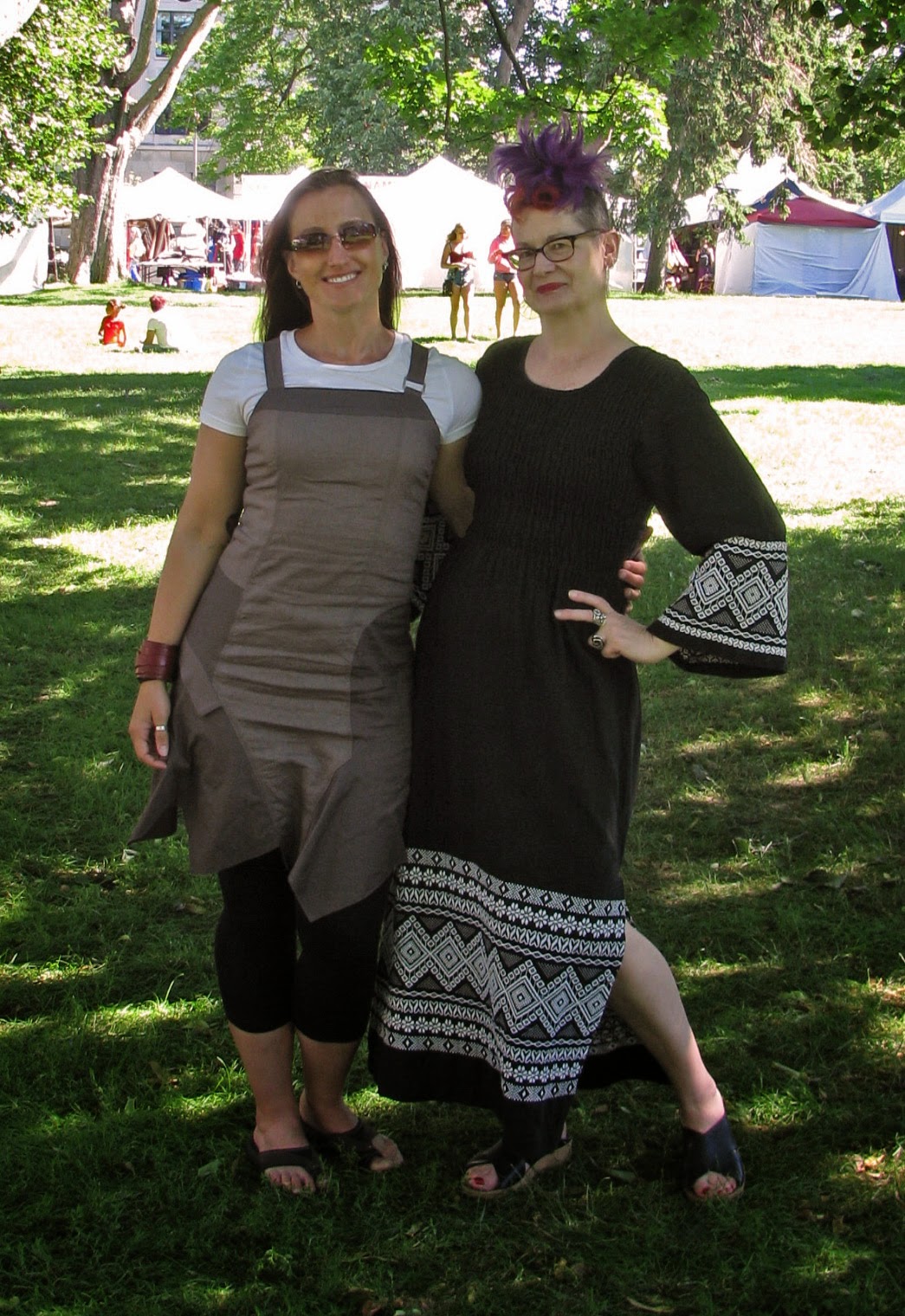 Heather and I, along with our mutual friend Jen, spent part of Friday afternoon at Sunfest.  We divided our time between checking out the vendor's booths, and sprawling on a blanket enjoying spring rolls, churros, pupusas and other tasty snacks.  Heather is wearing a cute dress she purchased at a friend's sale, and I'm wearing a dress purchased by another friend in Arizona many years ago and gifted to me last spring when she was purging her wardrobe.  Friday was cool in comparison to the temperatures we had earlier in the week, so the heavy cotton of the dress was quite comfortable.  If it was all black, the dress would be too severe but the embroidery on the hem and the sleeves made it festival-worthy, and I added a circle of purple feathers to my hair that I found at The Fairies Pajamas booth.  I didn't think that it looked that crazy, but judging from the number of people whom I caught motioning to their companions to "look at her hair", I apparently am not the best judge on those kinds of things.

Remember I said I would show you which necklace I purchased from the store I featured in my previous post? 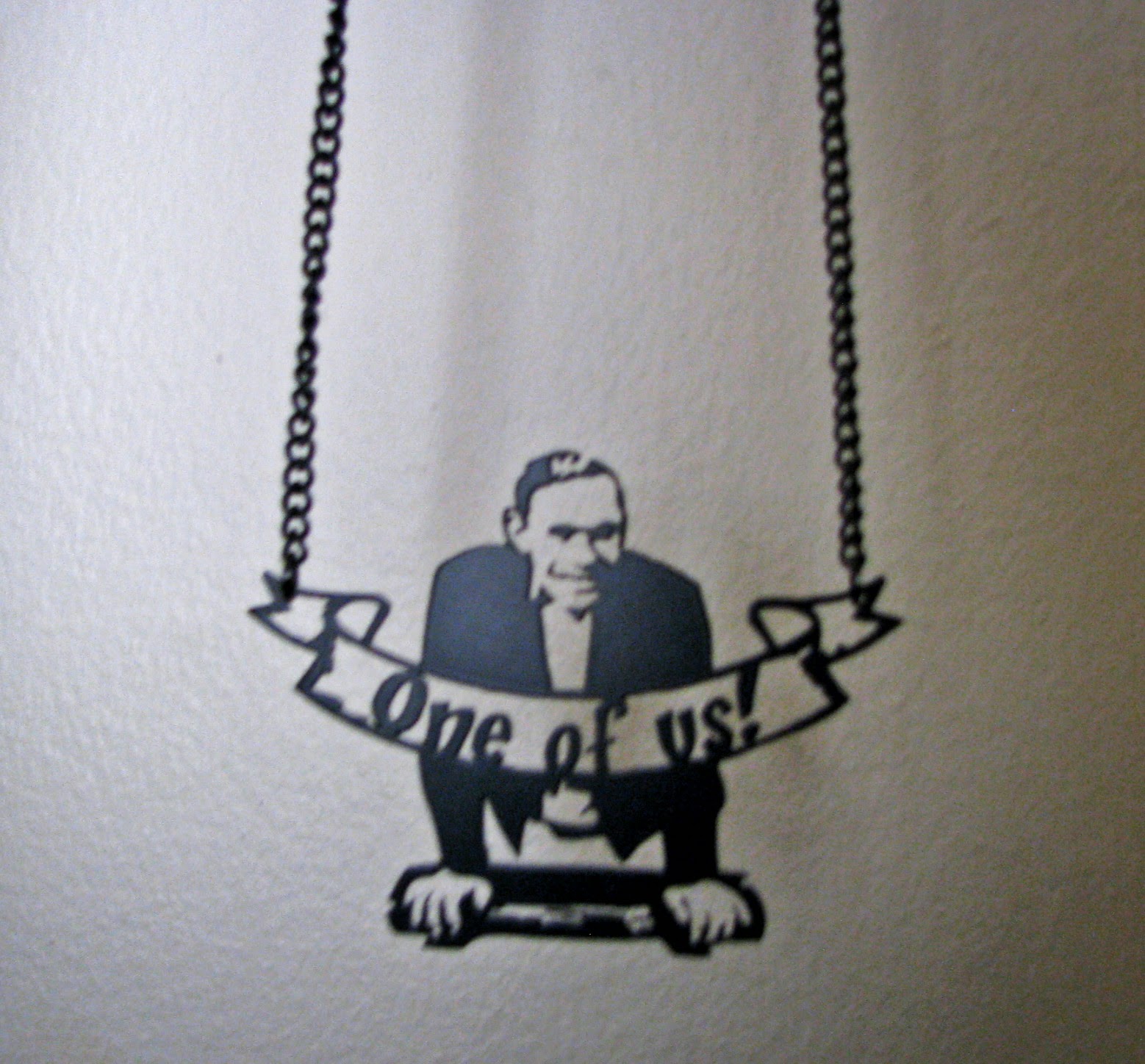 I had never seen a Johnny Eck necklace before, and as I feel like I've been letting my own freak flag fly a little higher these days, it seemed appropriate.  I think that Desiree would approve.
Posted by Forest City Fashionista at 10:27 PM