"Once There Was Only Dark, But If You Ask Me, The Light's Winning"*

Two new art galleries have opened in London recently, so I decided to visit both of them this week and get my culture fix.  Coincidentally, the exhibits at both galleries incorporated the theme of light and dark. 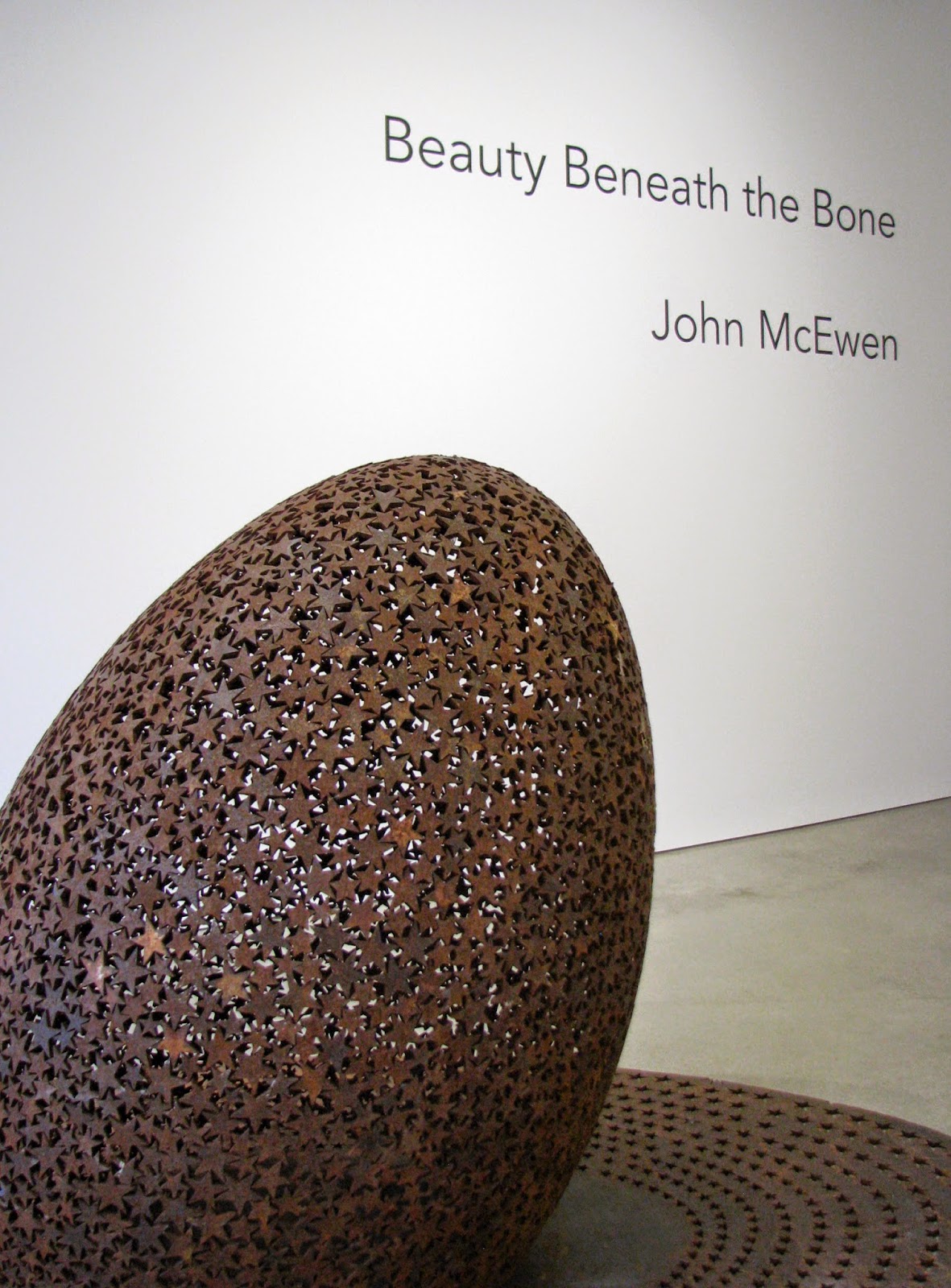 DNA Artspace, run by Allison Matic and Thea Yabut, has a mandate to expose the public to contemporary art via exhibitions, talks, screenings, performances and other events.  Located at 123 Dundas Street, between Talbot and Richmond, the gallery is only a block away from Museum London and very close to 3 other downtown art galleries.   The gallery's first exhibit features metal sculptures by Canadian artist John McEwen. 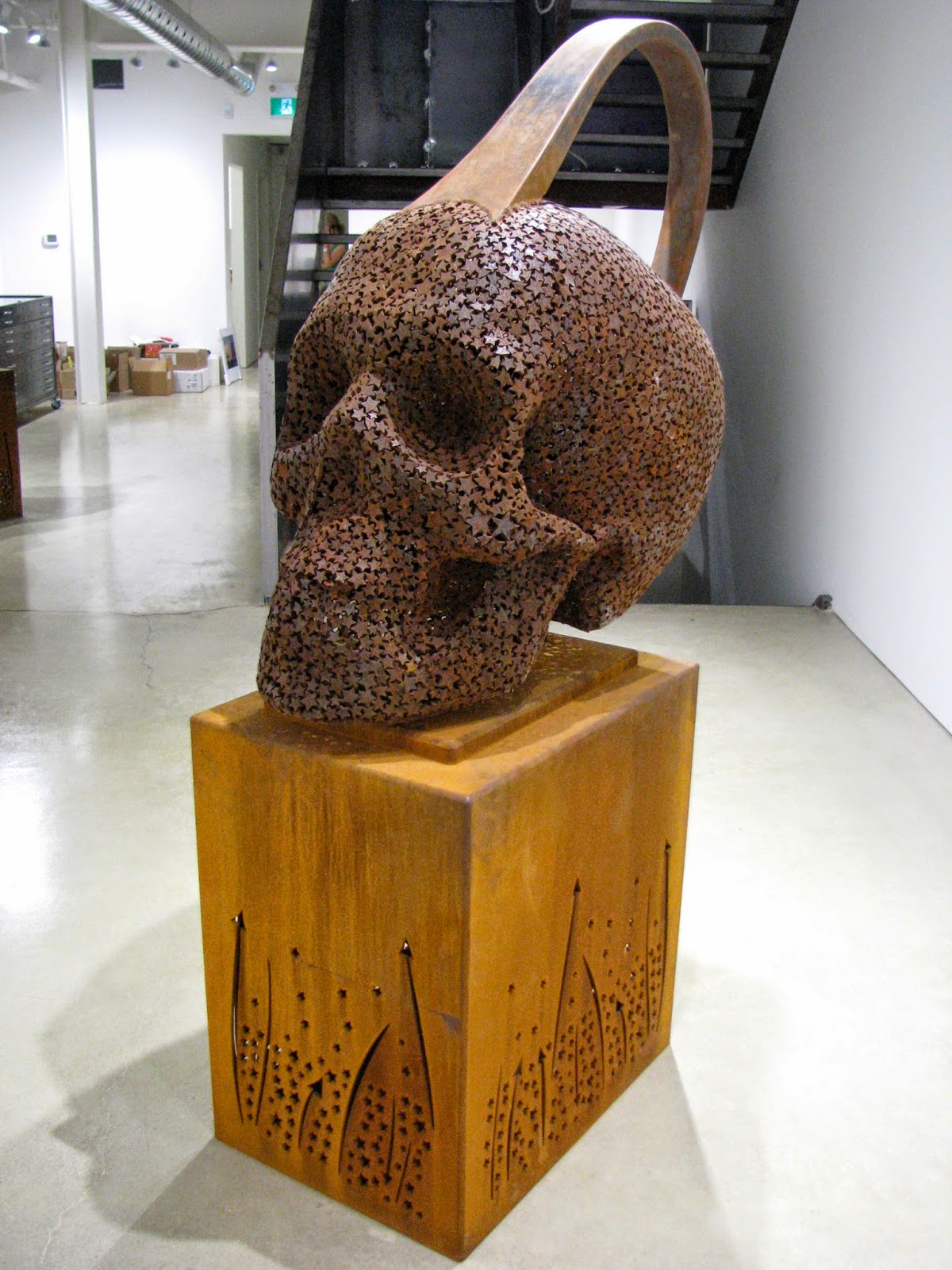 McEwen is best known for his steel sculptures of Canadian wildlife, some of which are displayed in public spaces in Toronto.  McEwen's recent work is constructed of small laser-cut steel stars fused together.  The resulting shapes allow light to shine through and add a lightness to them.  The sculptures in this exhibit are inspired by objects that can serve as vessels of some sort - a pitcher, skull, egg, etc. 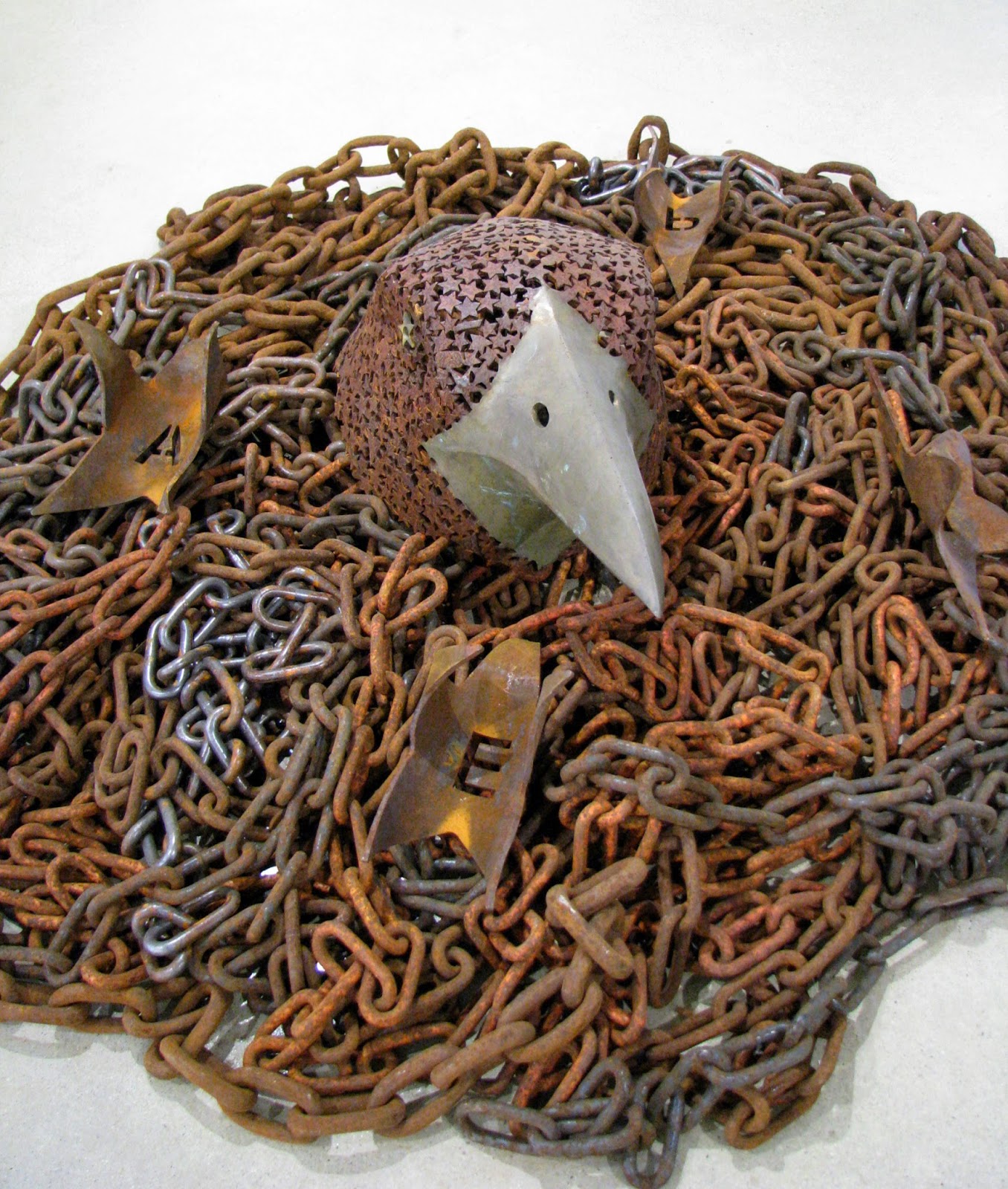 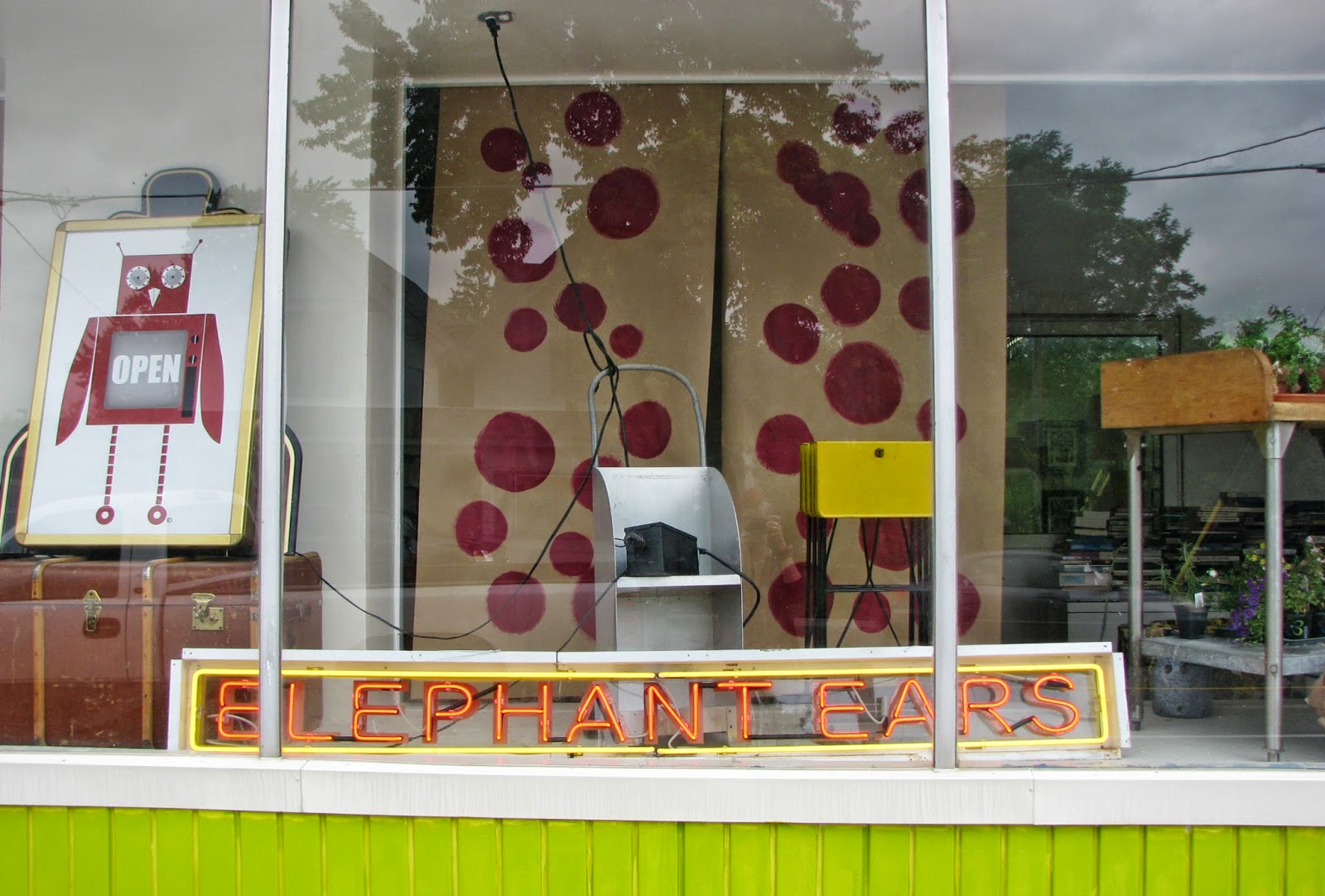 Back to the Fuchsia is an antiques and vintage store and art gallery under one roof.   Located at 1034 Dundas St. near the Kellogg's factory, it's a bit out of the way (not for me, that's my neighbourhood) but definitely worth a visit. 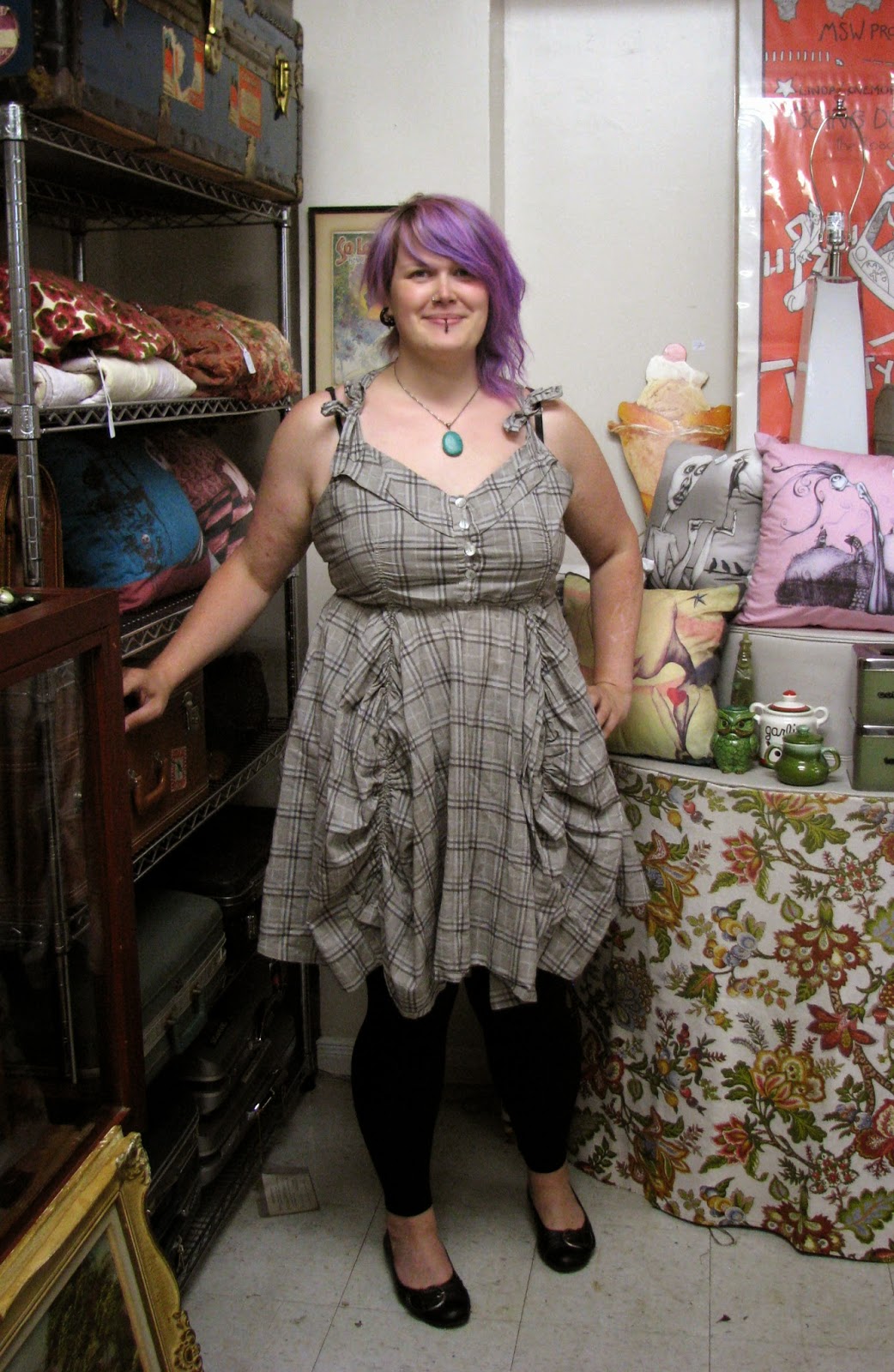 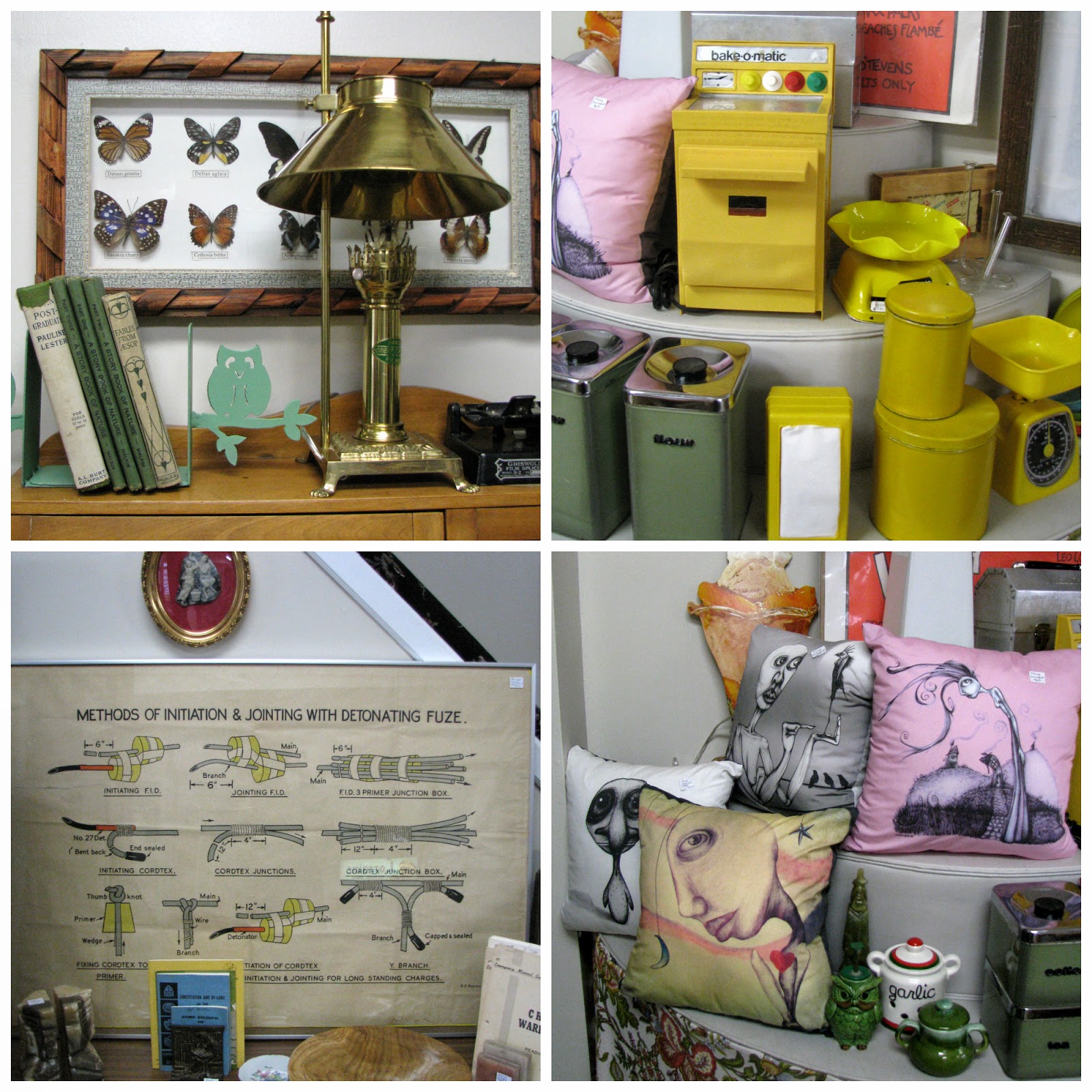 Mary's store has an eclectic mix of the old and new.  Sarah Legault's pillows mingle happily with vintage cannisters and WWII instructions regarding "initiation and jointing with detonating fuze". 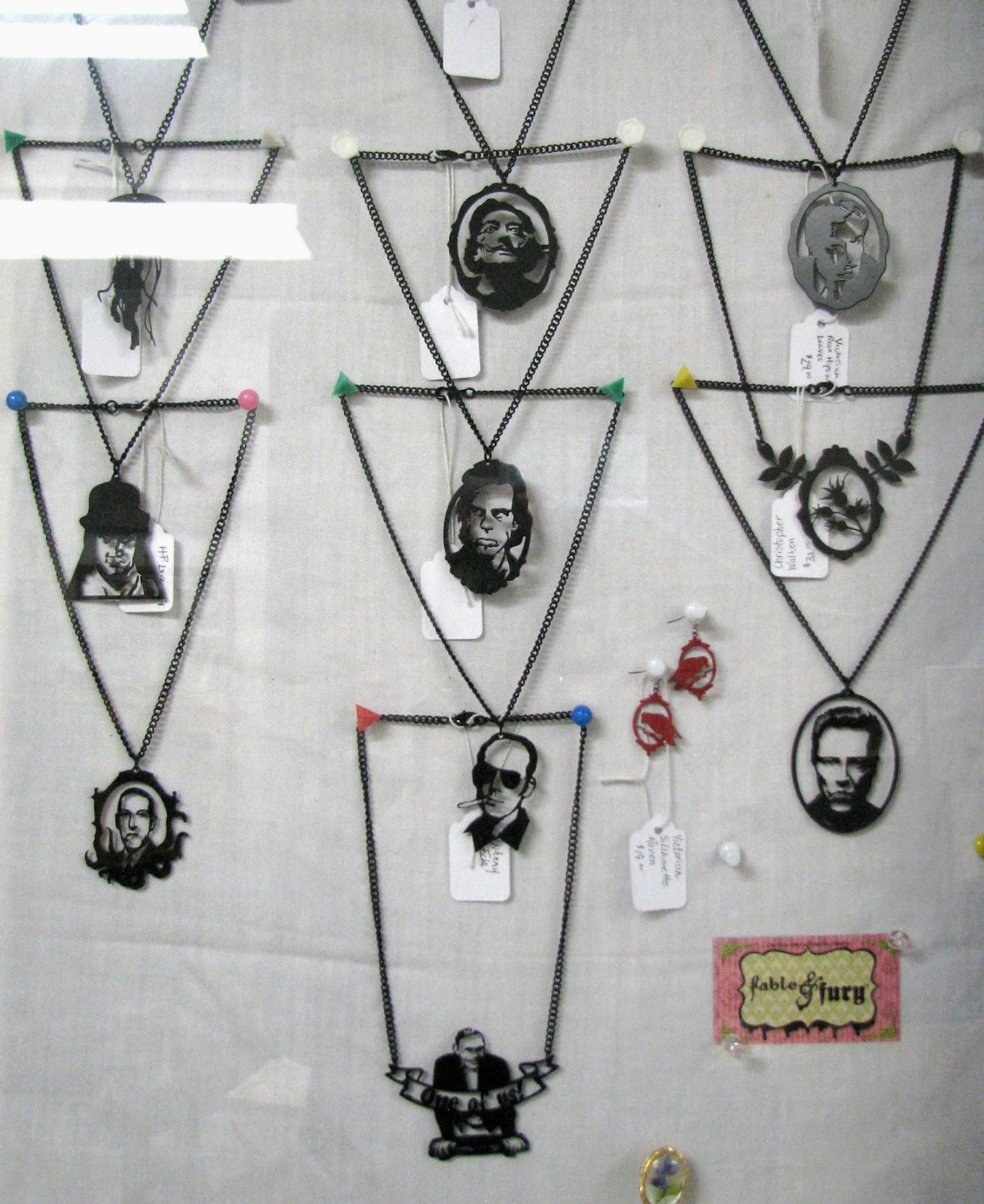 I was immediately drawn to this display of stainless steel silhouette jewellery by Fable and Fury and agonized over which one to take home (Nick Cave! Christopher Walken! Dali!).  I'll let you guess which one I decided on, and I'll show you in my next post. 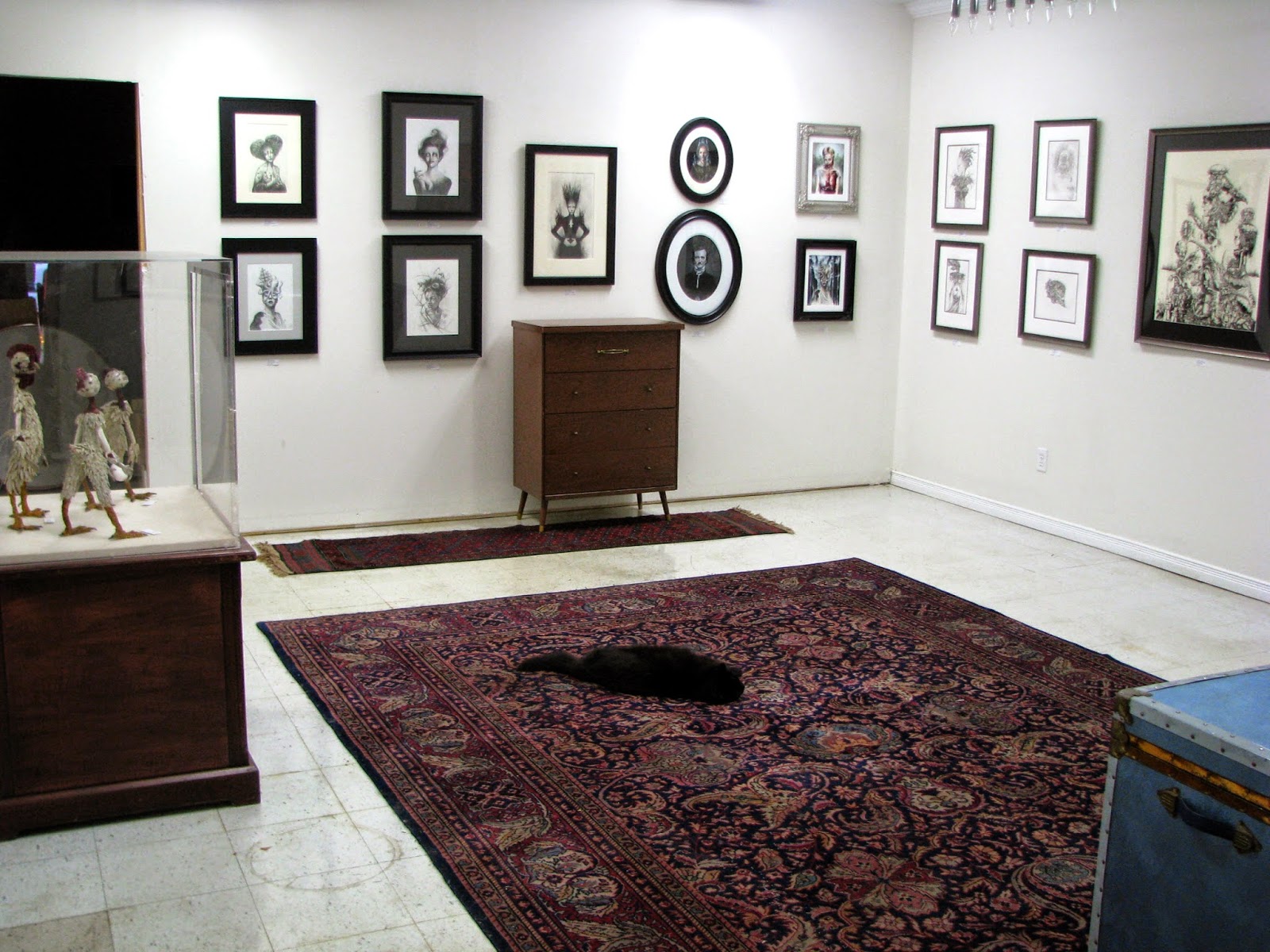 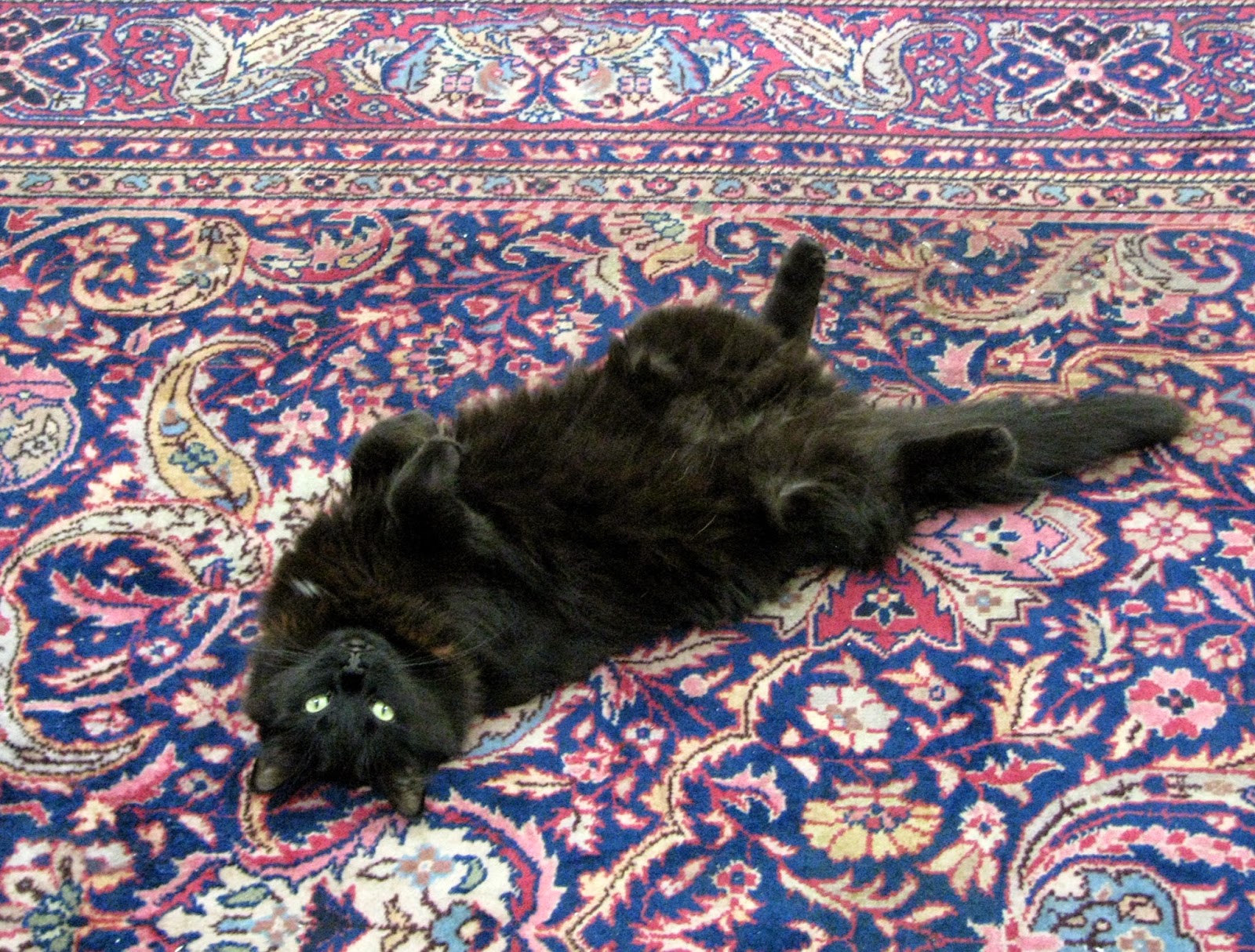 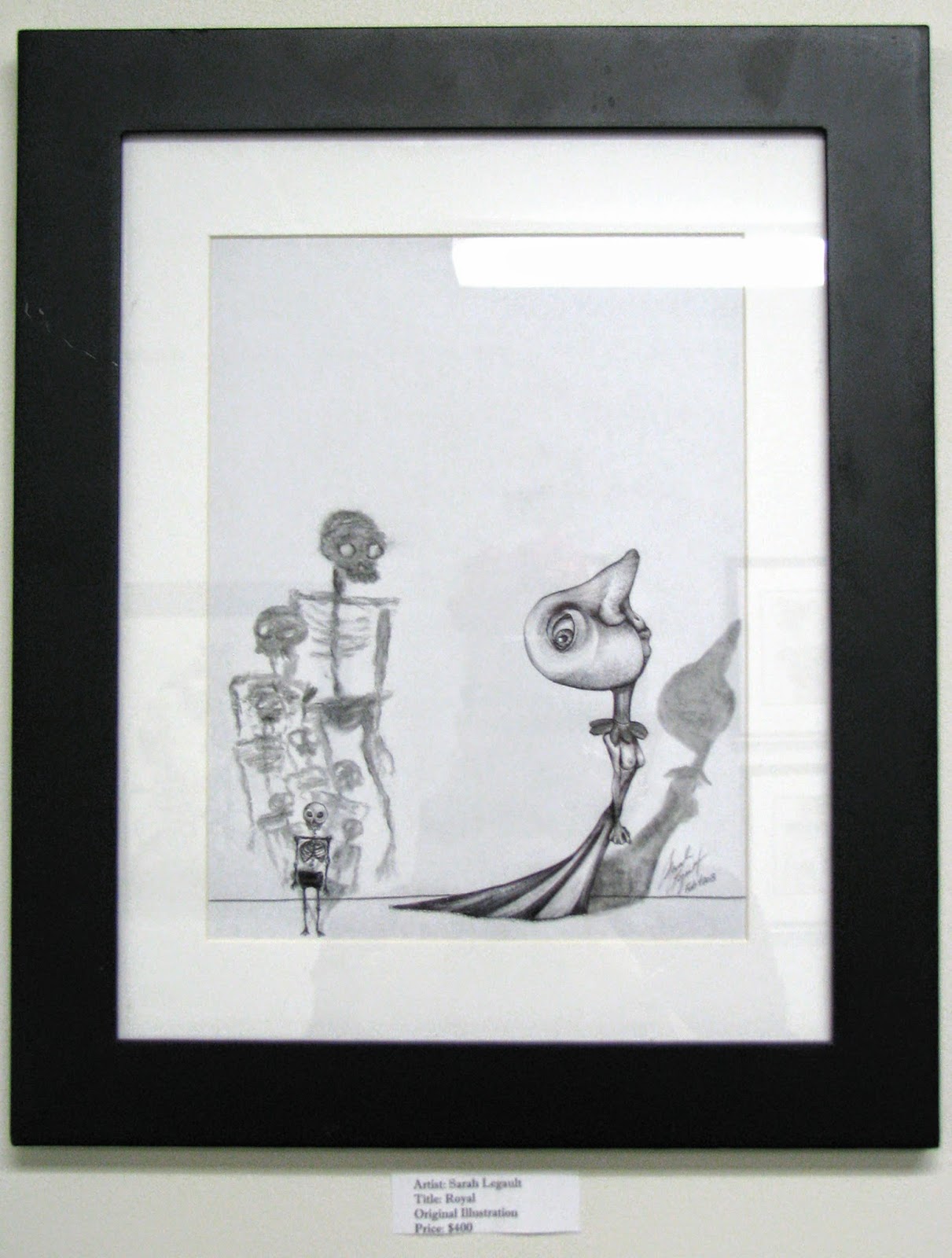 One of Sarah Legault's pieces in the show, titled "Royal".  Legault is one of those people who make everyone else look like a serious under-achiever.  She's a multi-talented artist - painter, creepy-doll maker, illustrator, photographer, film-maker, and now curator.  You can see her work on her website. 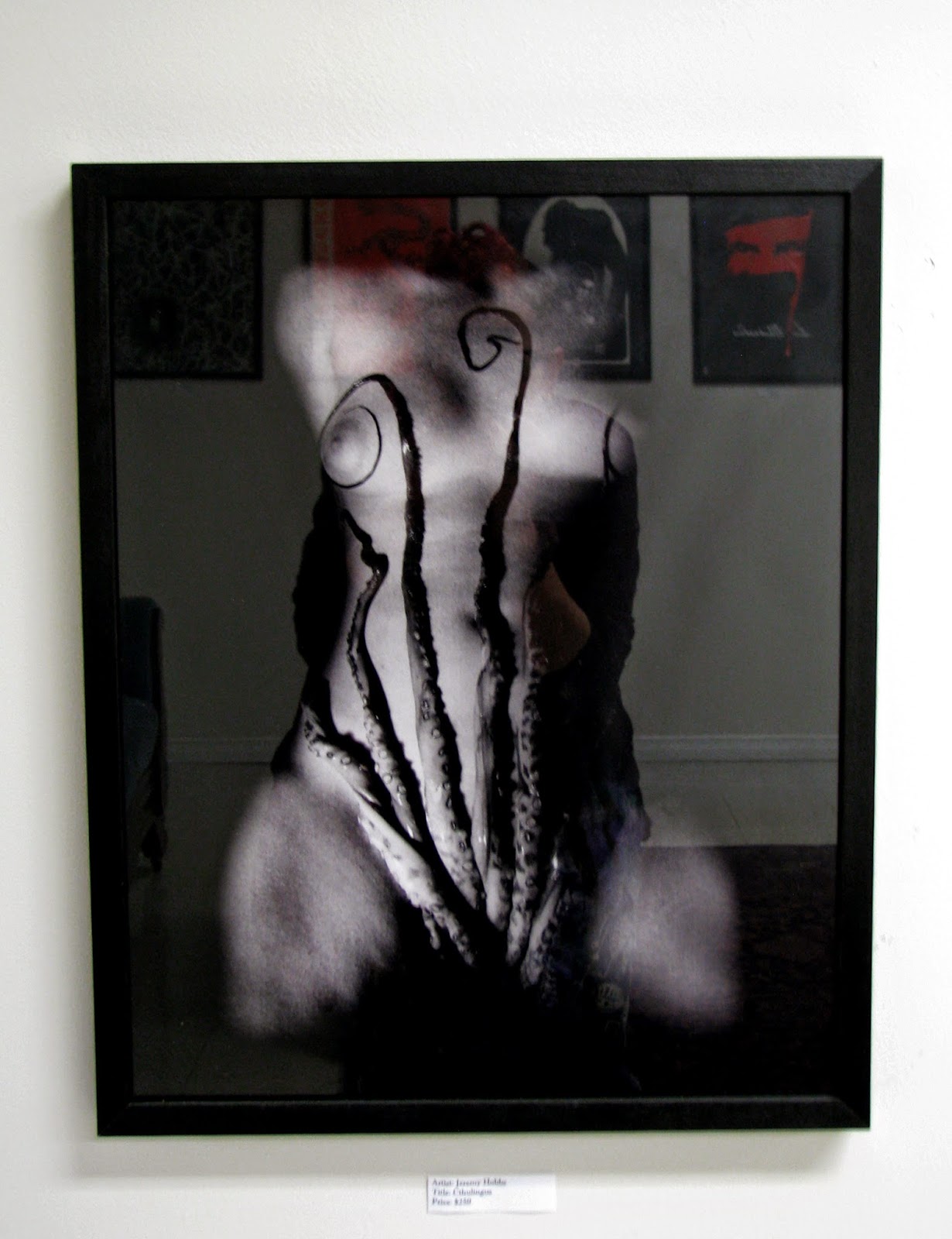 Unfortunately the placement of the lights made it impossible to get a shot of this photograph by Jeremy Hobbs without getting the reflections of the works on the opposite wall and of me.  Yes, that is a real octopus.  Hobb's photography delves into the dark parts of the human psyche and sexuality is a major theme in his work. 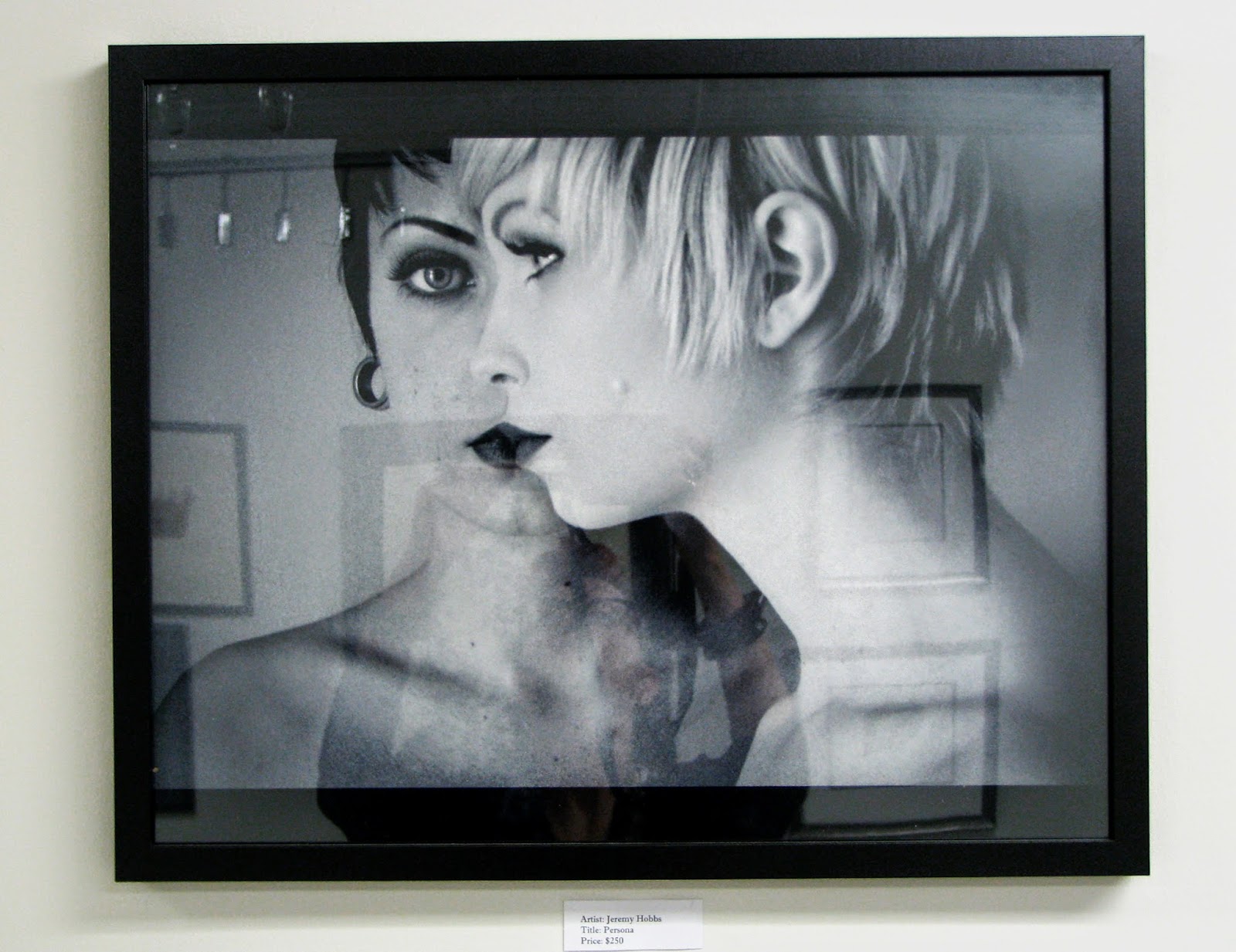 There were some film posters designed by Phantom City Creative, a Toronto-based independent design studio that does entertainment design for film, music and television. 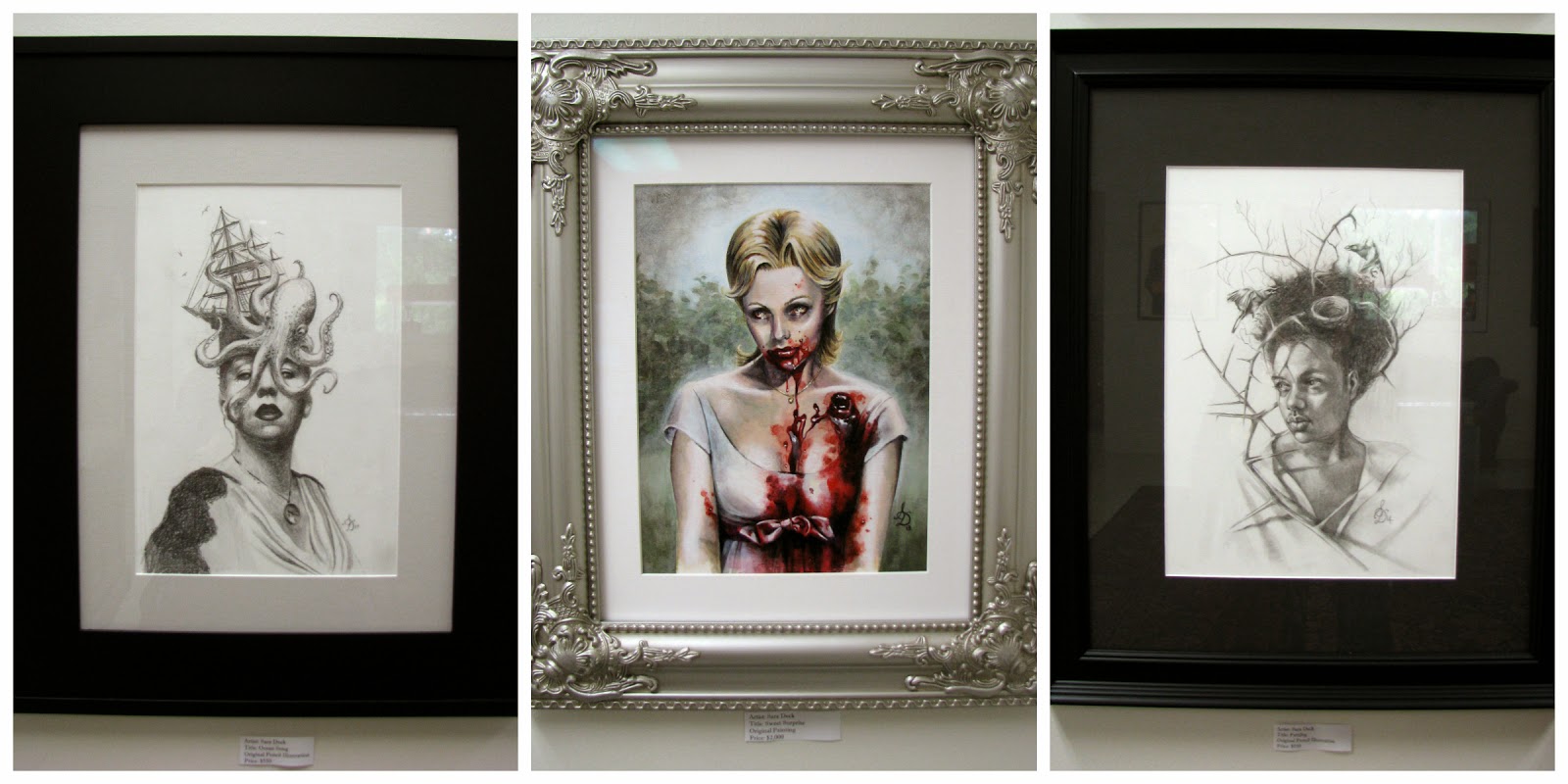 Left to Right:  Ocean Song, Sweet Surprise, and Pettifog - all by Sara Deck

London Artist Sara Deck's work features women in rather dark and mysterious circumstances.  The exhibit included some of her original pencil sketches and finished paintings. 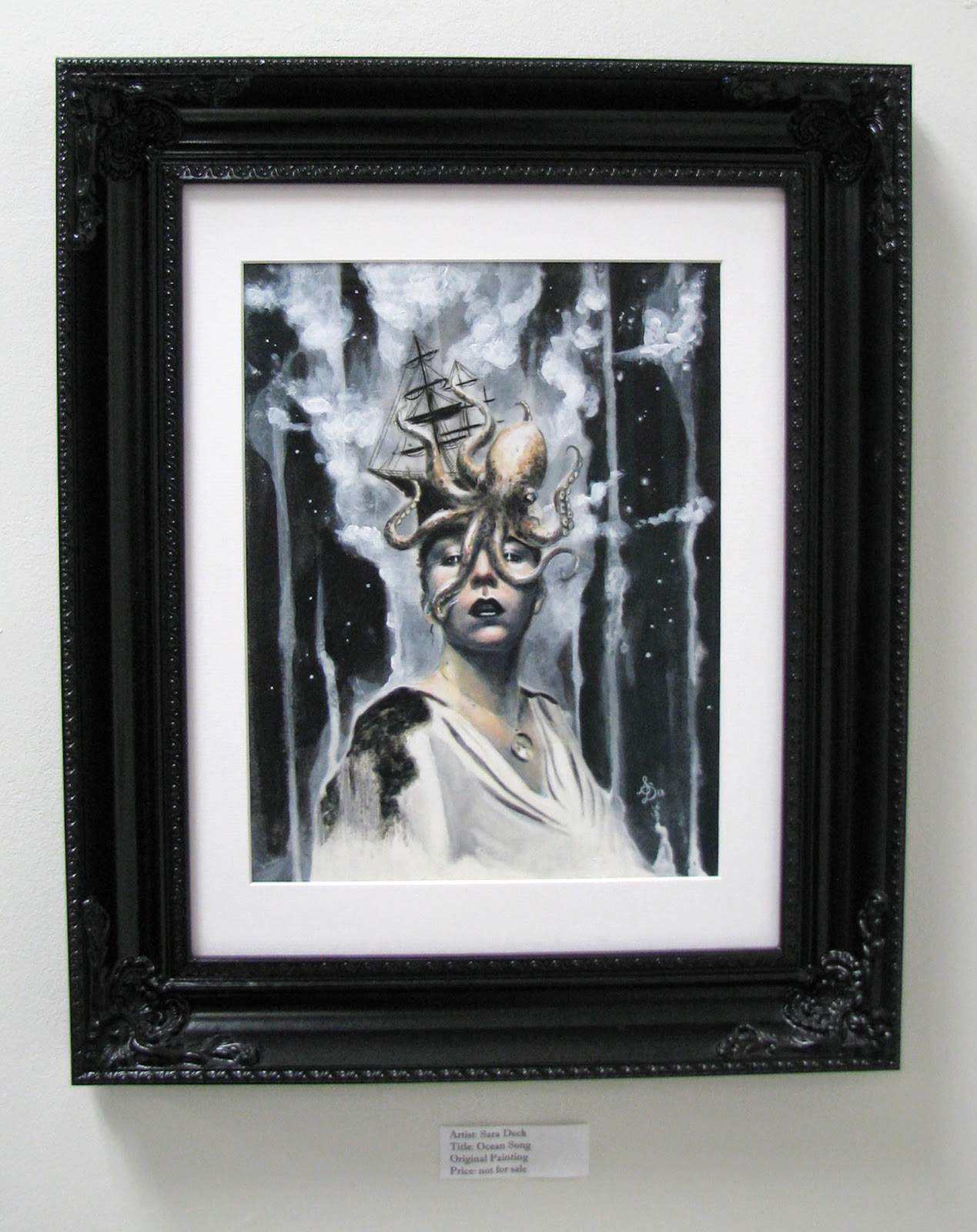 The final painting version of Ocean Song featuring yet another octopus 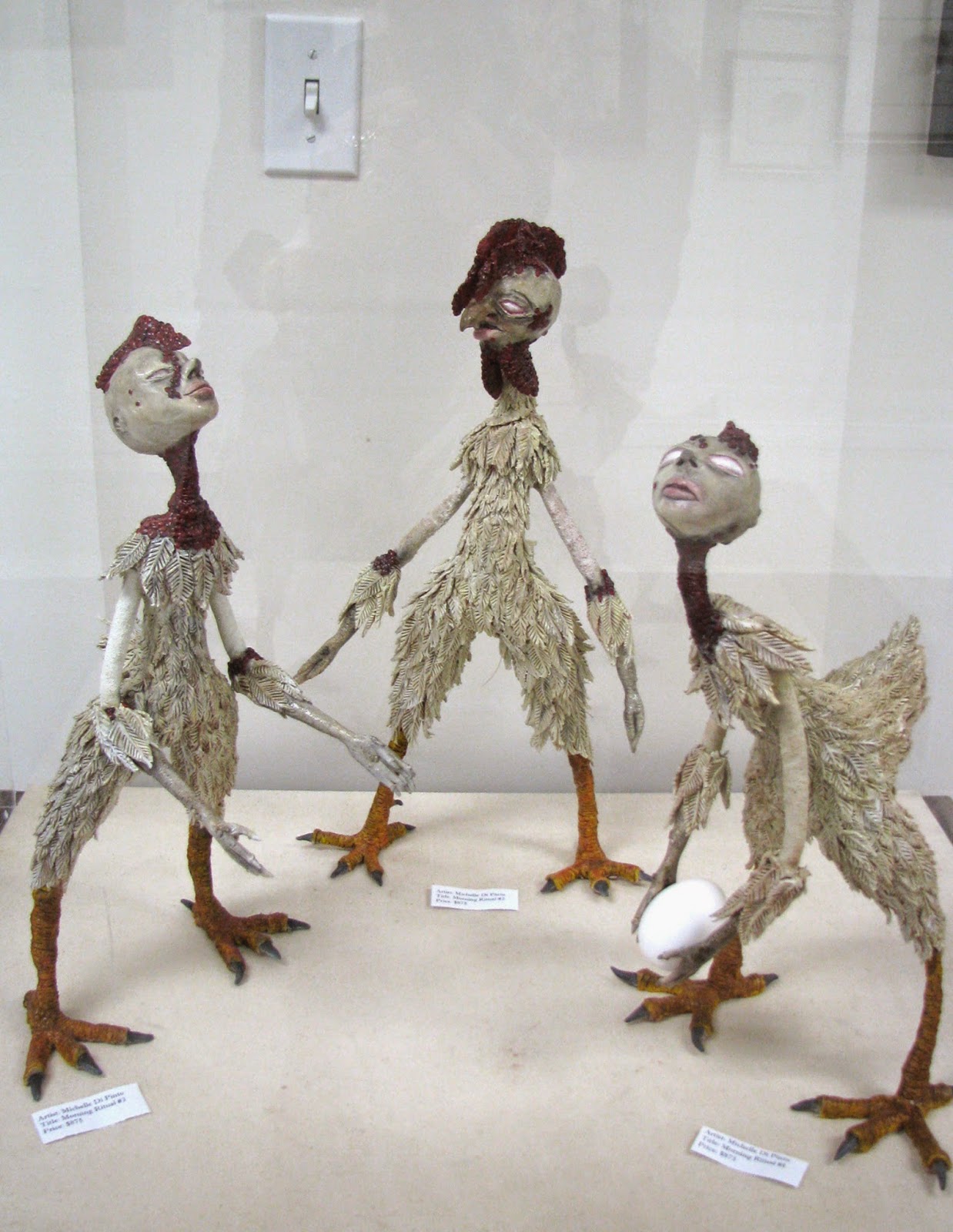 Michelle Di Pinto creates art dolls from polymer clay, and her work has been shown at Dollirium Art Doll Gallery here in London (and has appeared in previous posts on this blog).  Her contribution to Nebulous is a trio of human/chicken hybrids titled "Morning Ritual, #1, #2 and #3. 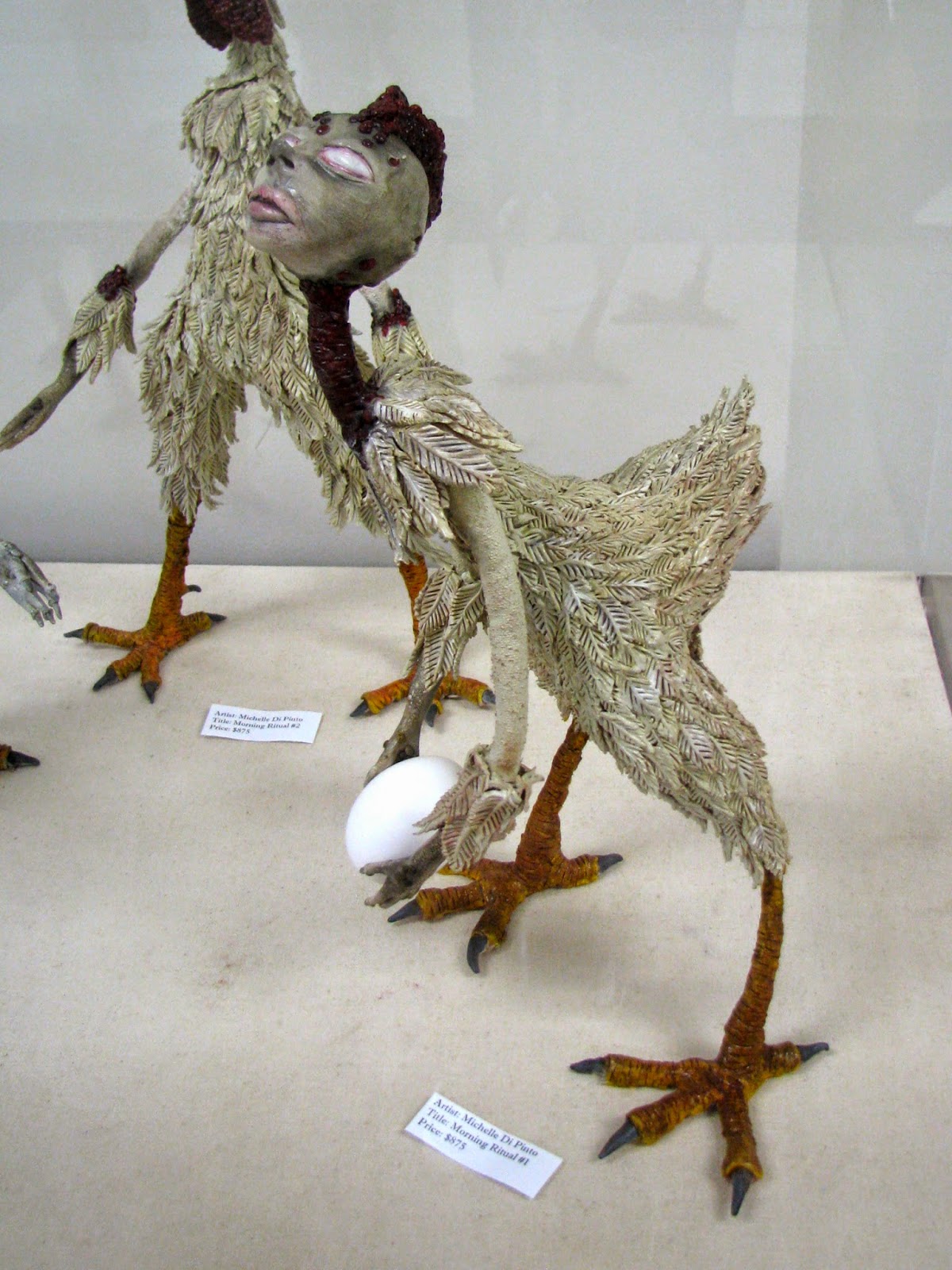 Their feathers are individually sculpted from polymer clay 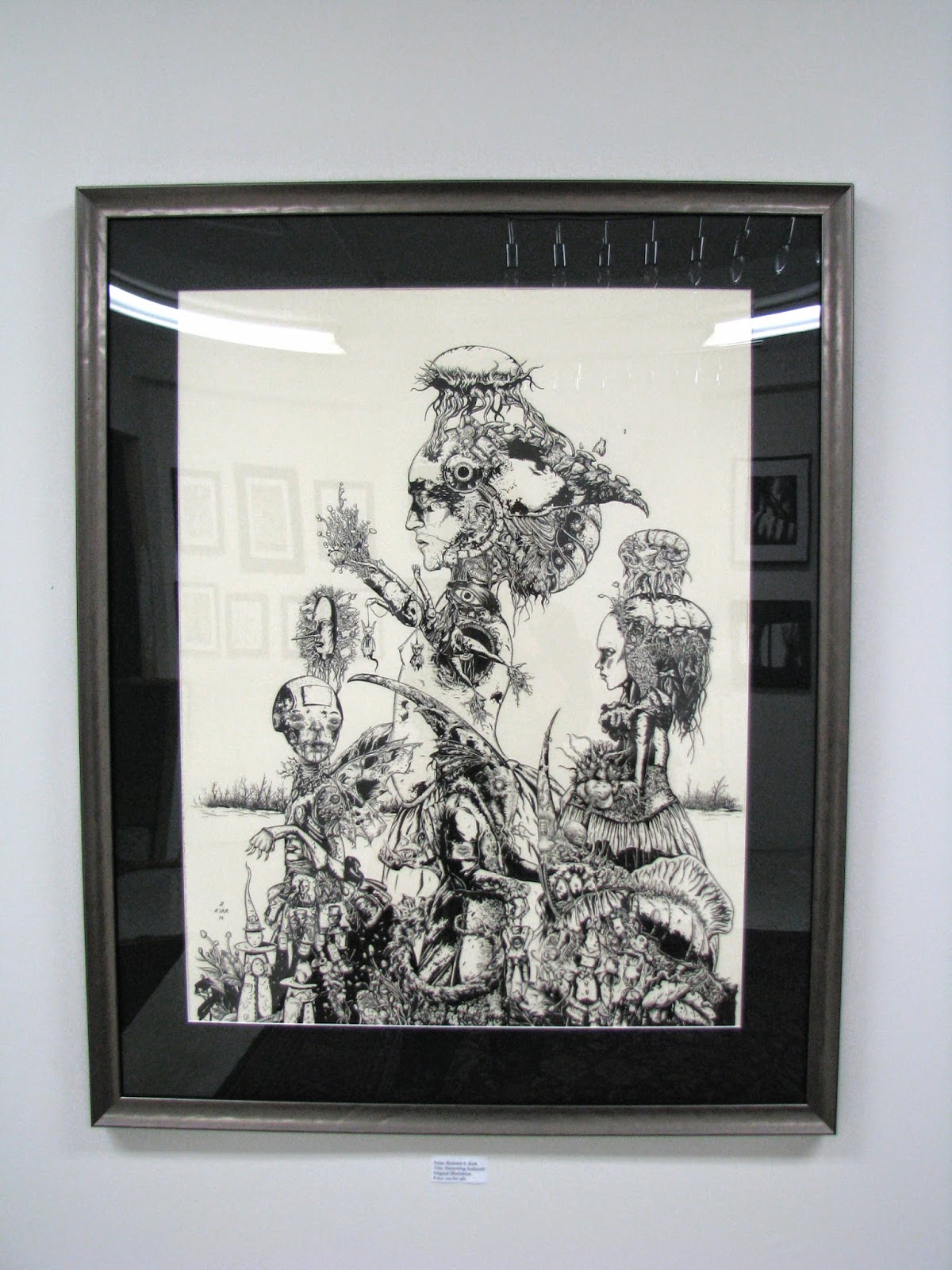 This piece, titled "Harrowing Sediment" by Canadian artist, illustrator and author Richard A. Kirk could easily command your attention for hours with its fantastical detail. 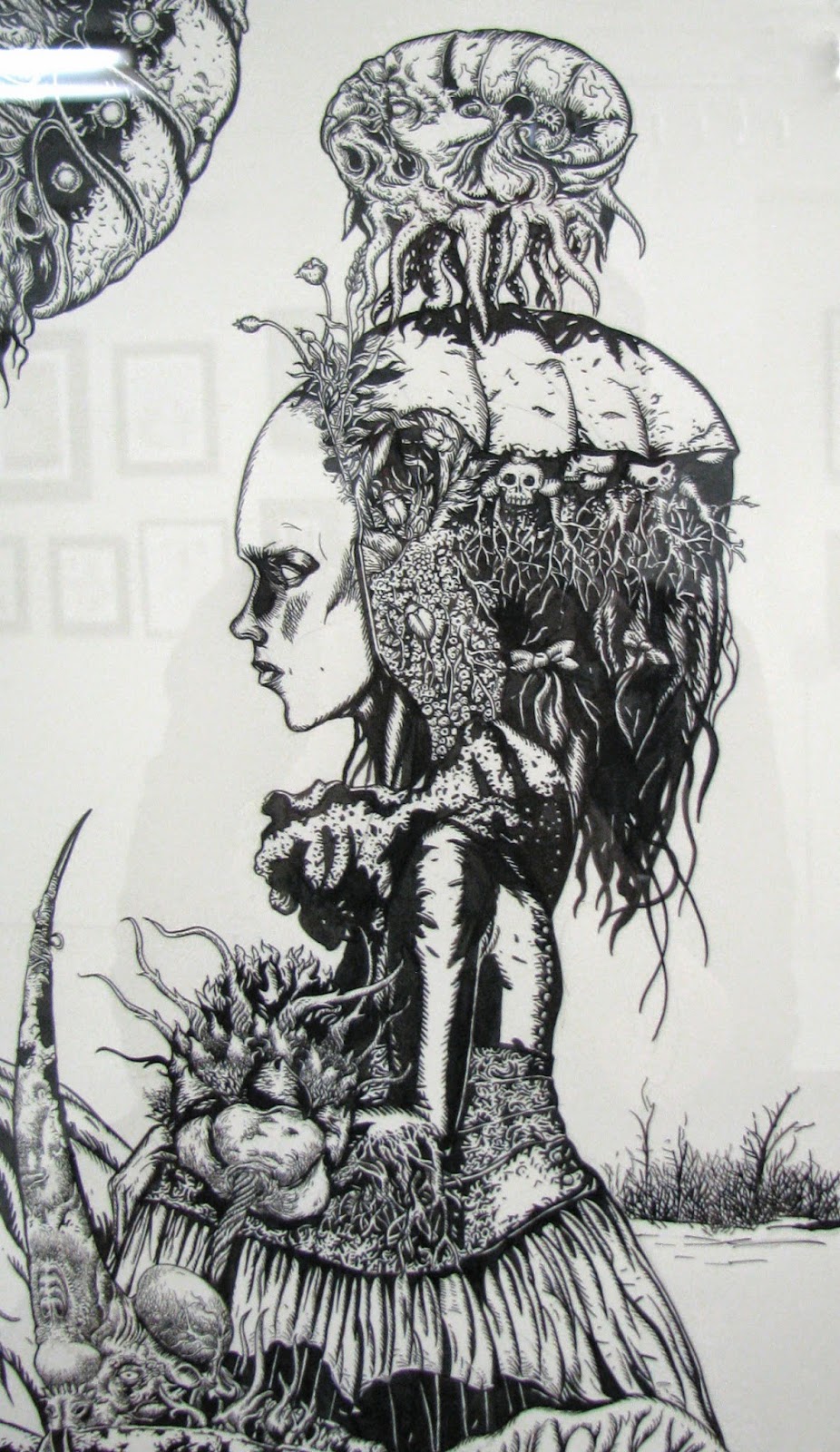 
Kirk has illustrated books by Clive Barker and it's easy to see how his illustrations would fit perfectly with Barker's fantasy and horror fiction. 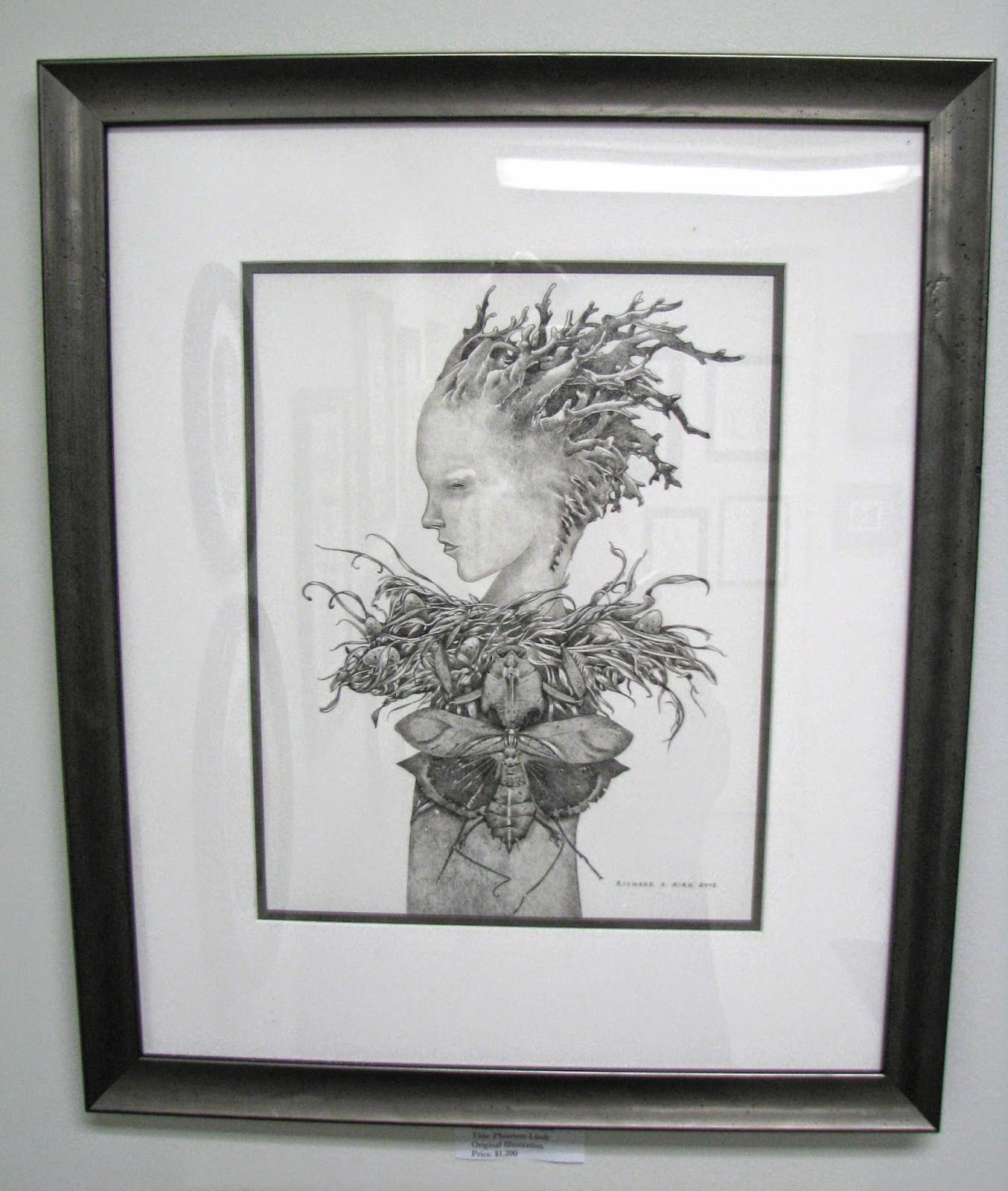 
Legault did an amazing job curating this show, which closes on Sunday.  I would have written about it sooner, but I just found out about it this week.  If you can get down to the gallery this weekend, they are open tomorrow, 10 am - 5:30 pm and Sunday, 12 noon - 5 pm.  London is home to some of the best artists in Canada, if not the world, and if dark and creepy is your thing, you don't want to miss it.  I can't wait to see what she has lined up for the next exhibit, titled Chimera, which opens on July 13th.

*The title of this post is the last line of dialogue, spoken by Rust Cohle, in the HBO series True Detective, some of the best television I've seen in a long, long time.
Posted by Forest City Fashionista at 7:37 PM