Life Is But A Dream


The Merriam-Webster online dictionary defines the word Chimera as:


1 a capitalized :  a fire-breathing she-monster in Greek mythology having a lion's head, a  goat's body, and a serpent's tail
b :  an imaginary monster compounded of incongruous parts
2  :  an illusion or fabrication of the mind; especially :  an unrealizable dream chimera
in my brain, troubles me in my prayer — John Donne>

3  :  an individual, organ, or part consisting of tissues of diverse genetic constitution
At least a part of each of these definitions could be applied to the exhibit of the same name now on view at Back to the Fuschia.   I attended the opening of the exhibit on Sunday night and was again impressed by Sarah Legault's curatorial skills. 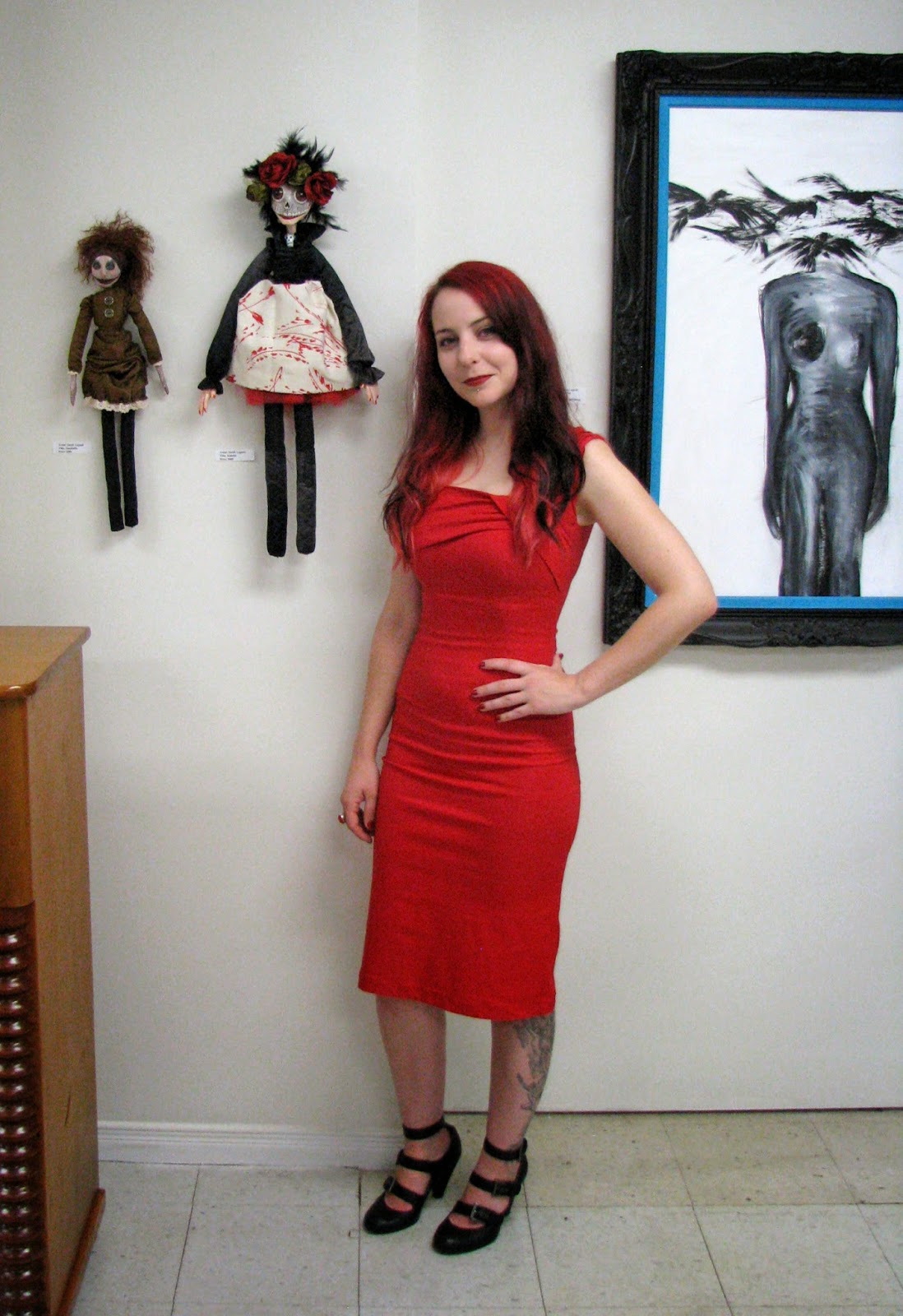 Artist and exhibit curator Sarah Legault stands flanked by works she created.  I was not aware until I spoke with Legault at this show that she had also curated the shows at Dollirium Art Doll Gallery (which, sadly, is no more).  If you have been following this blog for a while, you may remember seeing some of the amazing and creepy dolls from those exhibits. 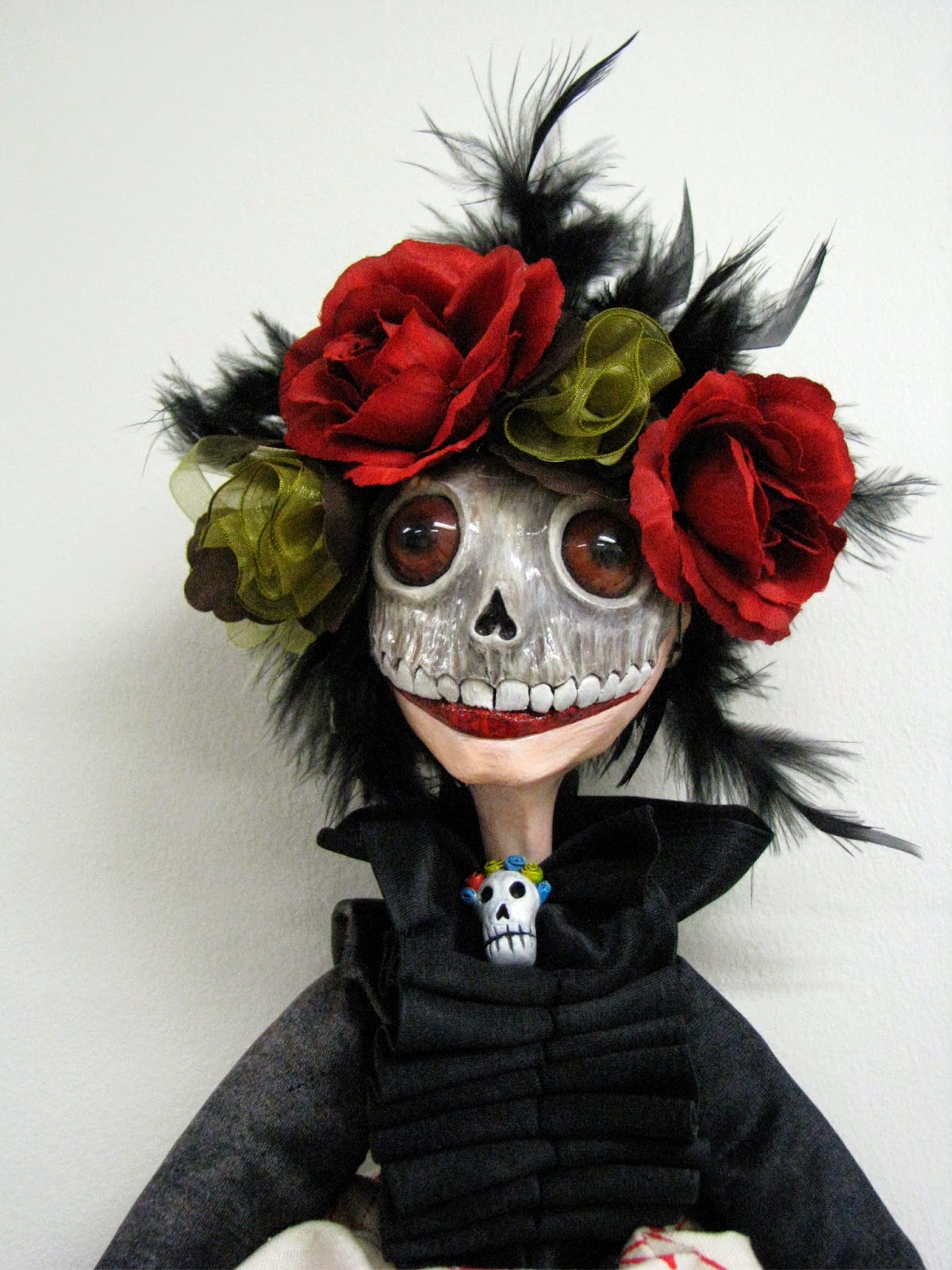 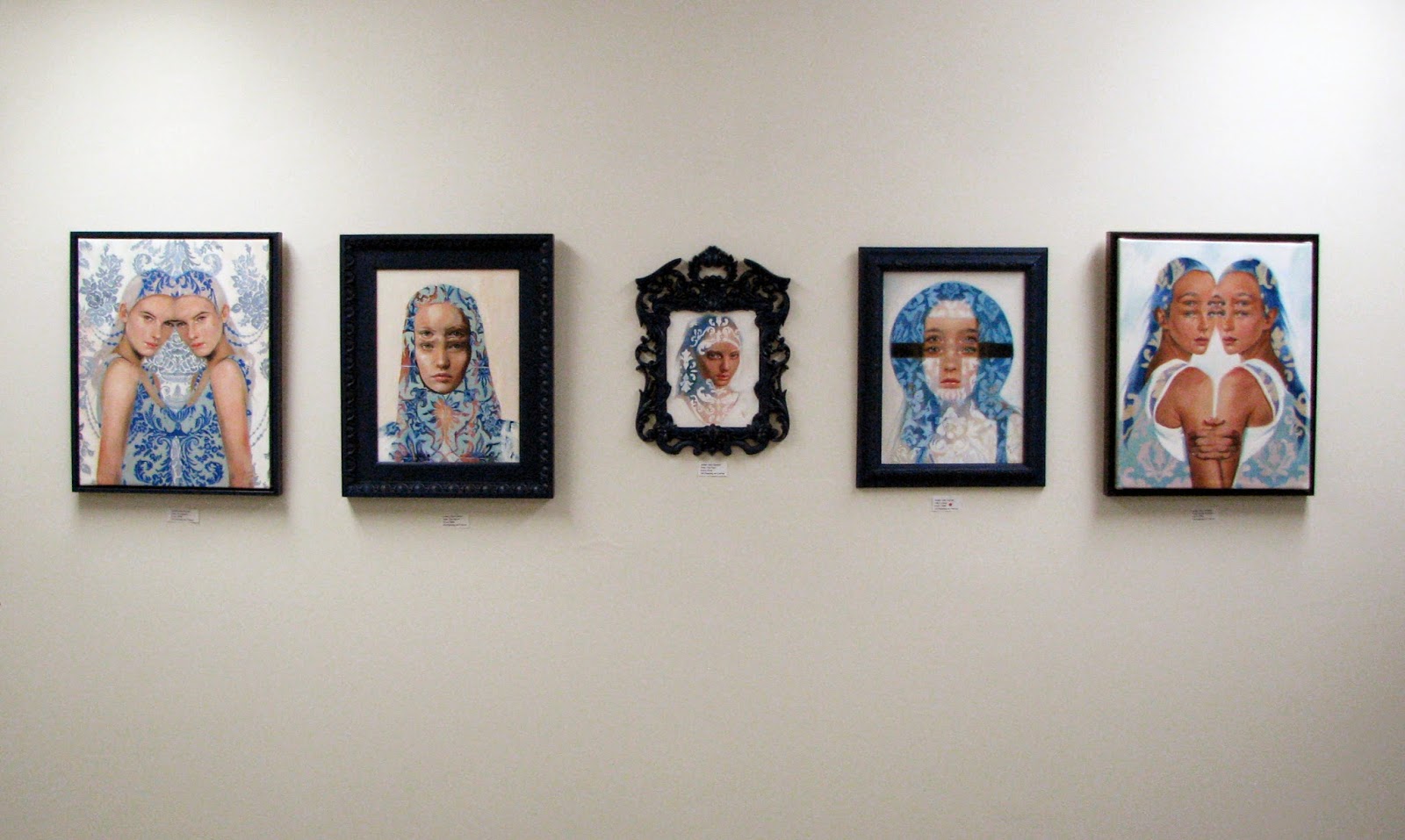 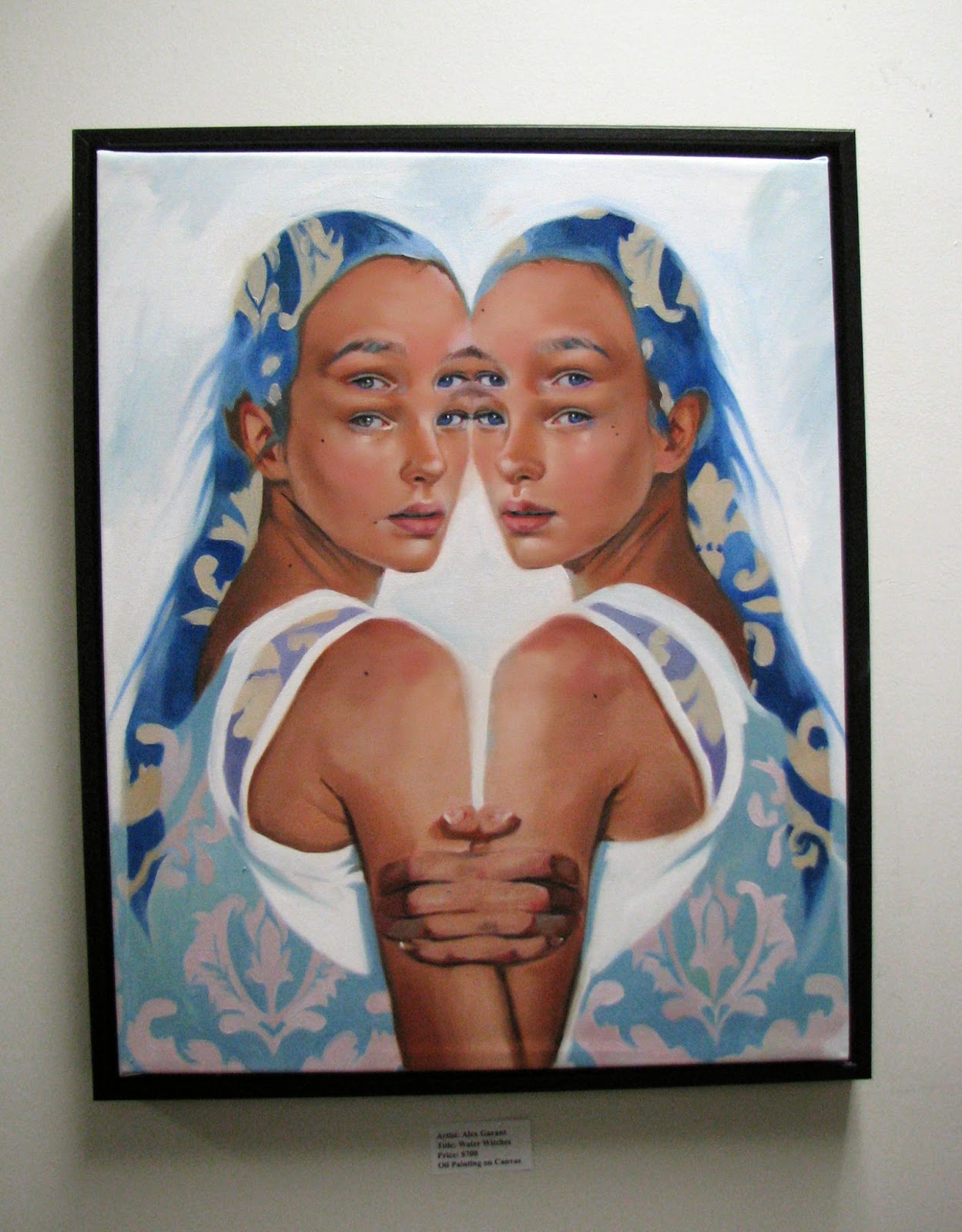 Garant's paintings combine a classic portrait technique with a graphic pop art sensibility, and the use of multiple eyes made what would otherwise be a very pretty image into something rather unsettling. 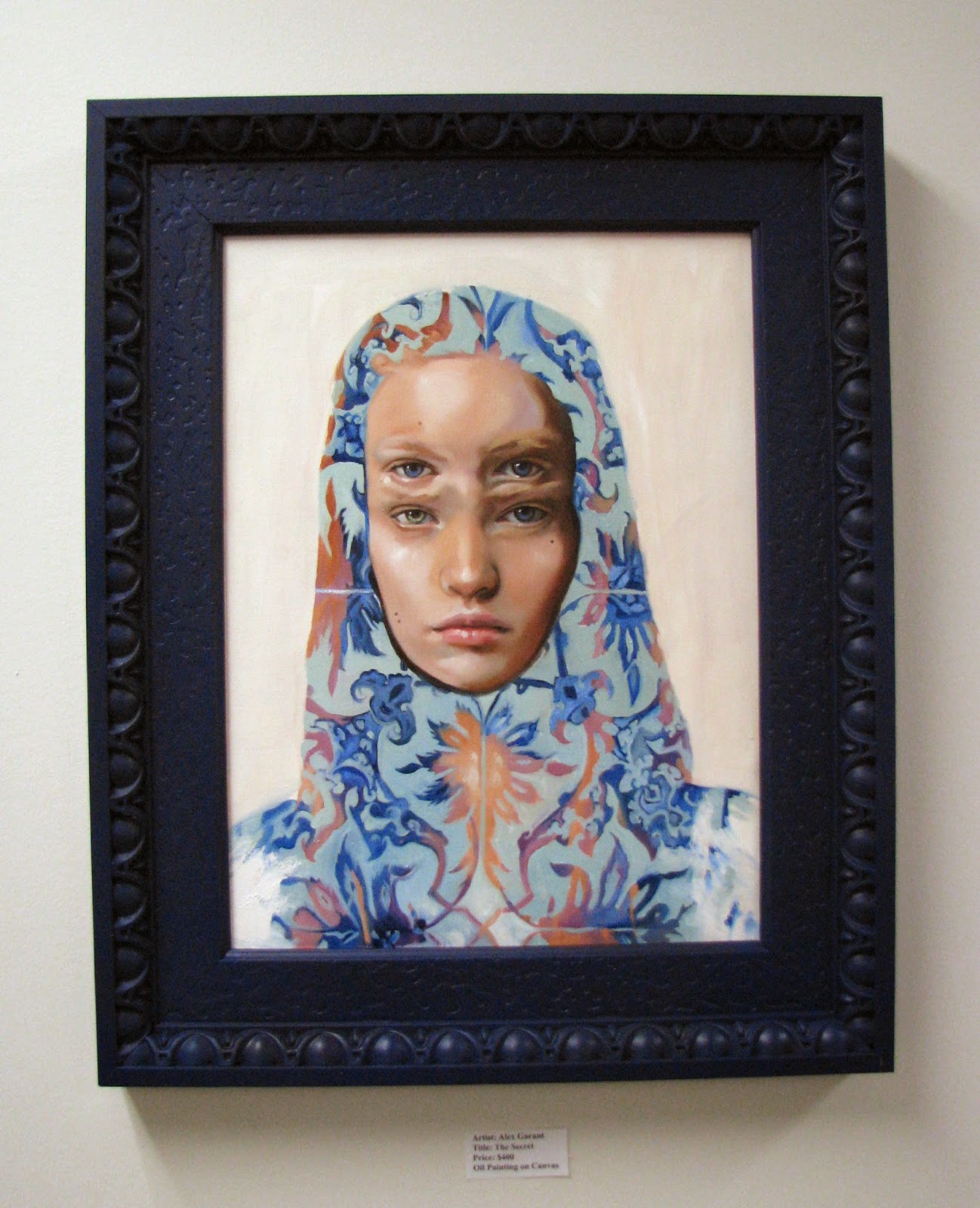 My favourite painting by Garant is the one above, titled "The Secret", which looks like the woman is standing behind one of those carnival figures that have the faces cut out so you can put yours in its place. 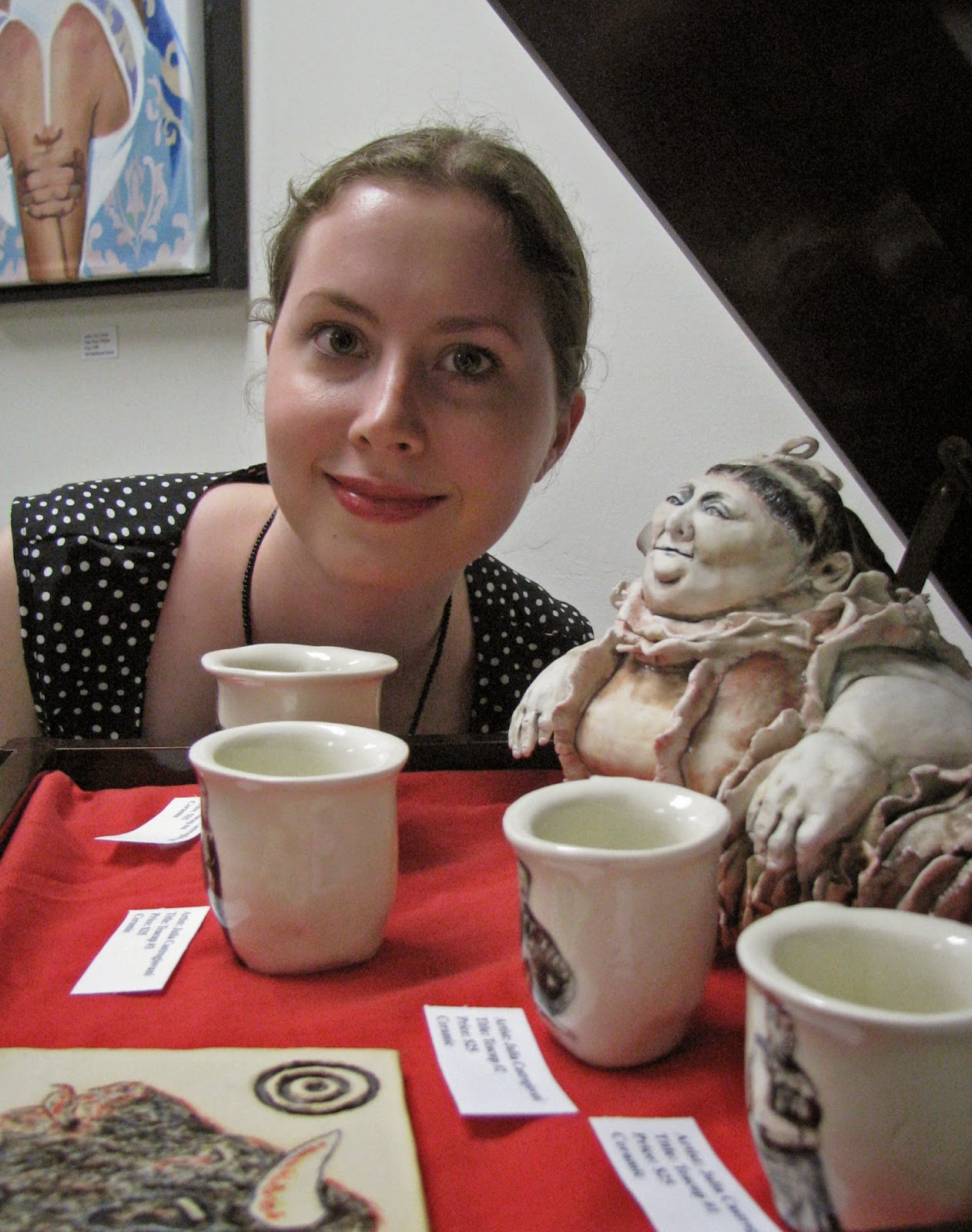 Julia Castrogiovanni was nice enough to humour me when I asked if she would crouch down to pose with the ceramic teapot and cups she made, which were displayed in an old Gramophone cabinet.  The tea pot is the lounging female figure on the right. 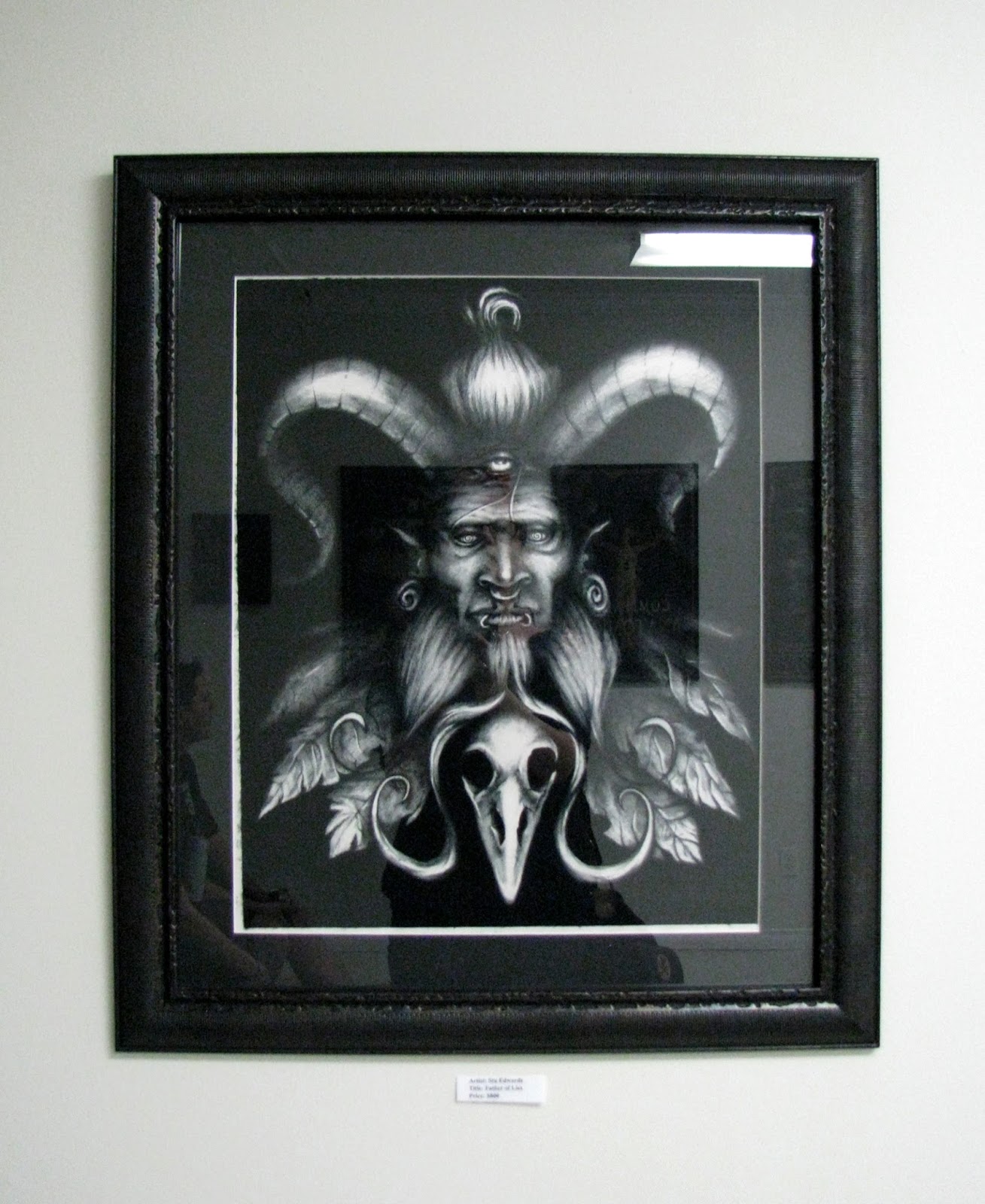 "Father of Lies" by Toronto artist Stu Edwards, who is the founder of The Canadian Alternative Arts Collective 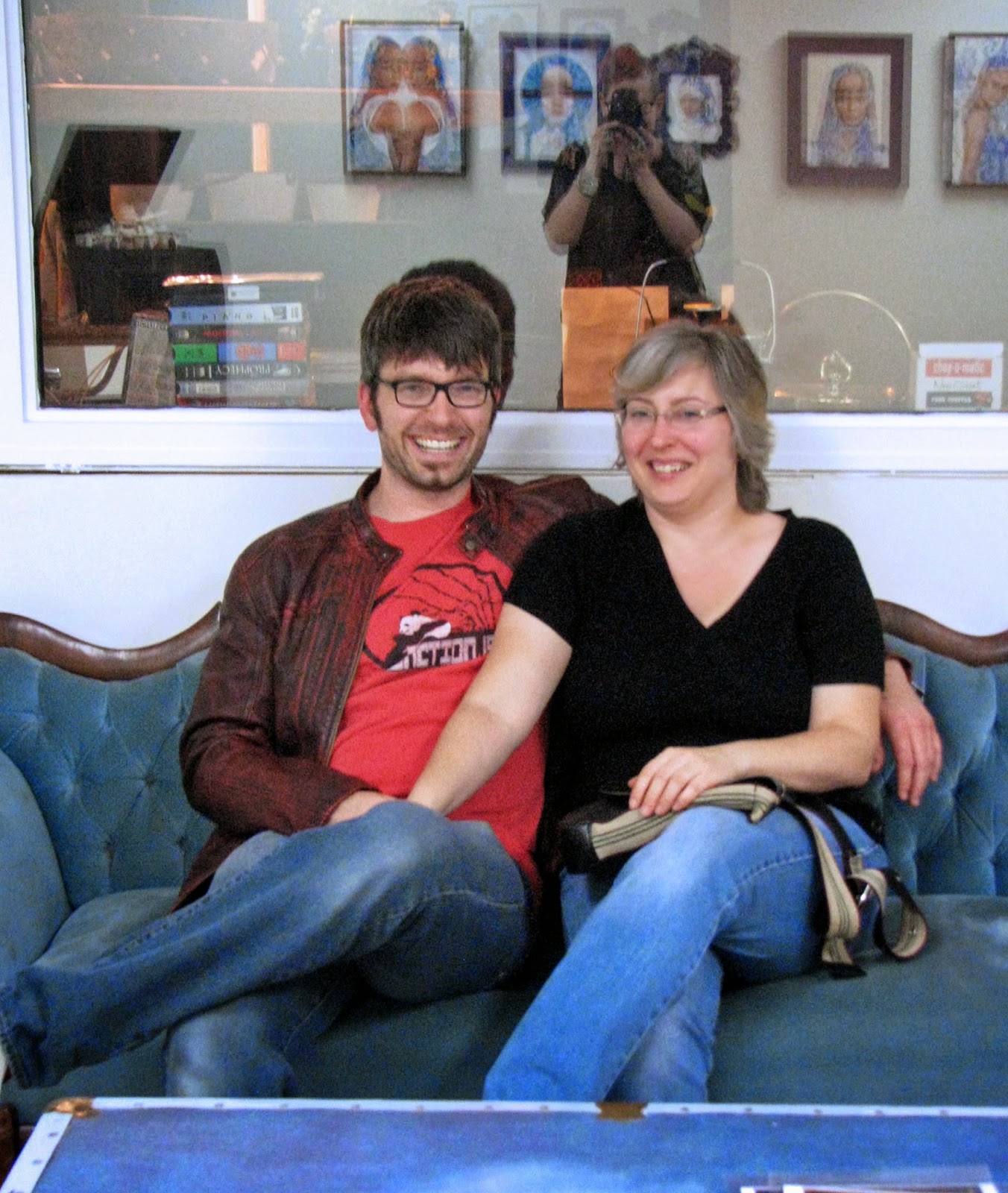 I had the pleasure of meeting, and having a lengthy chat with, Cambridge artist Sean Chappell, and his wife, author Kit Daven.  They are definitely one of the coolest couples I've ever met.  Sean's work, which incorporates the surreal, the fantastic, and the downright disturbing, has a dark sense of humour evidenced in the titles of the pieces such as "I Hate It When My Eyes Blow Out".  Chappell has a self-declared obsession with pumpkins, and the image appears in several of his paintings. 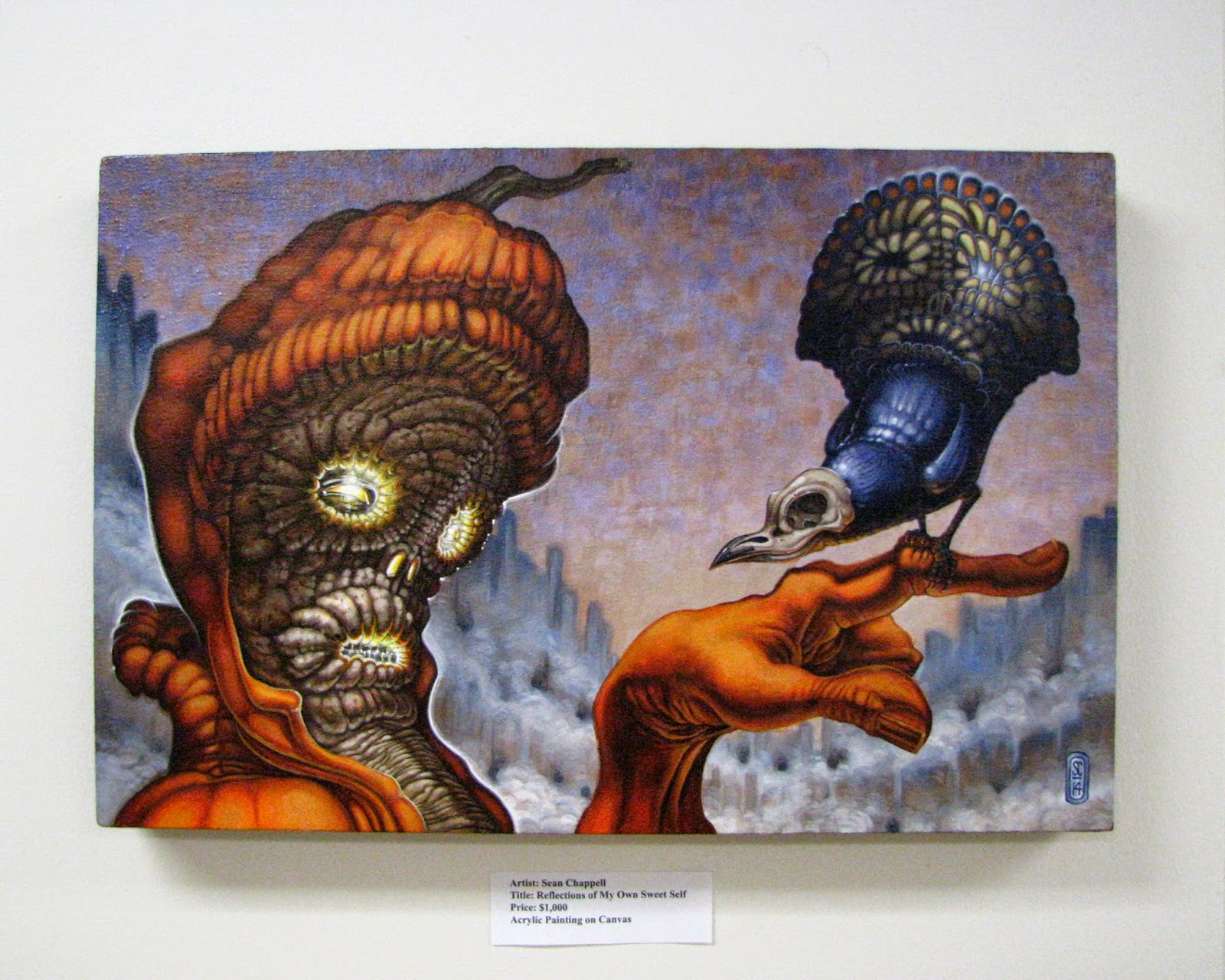 "Reflection of My Own Sweet Self" by Sean Chappell 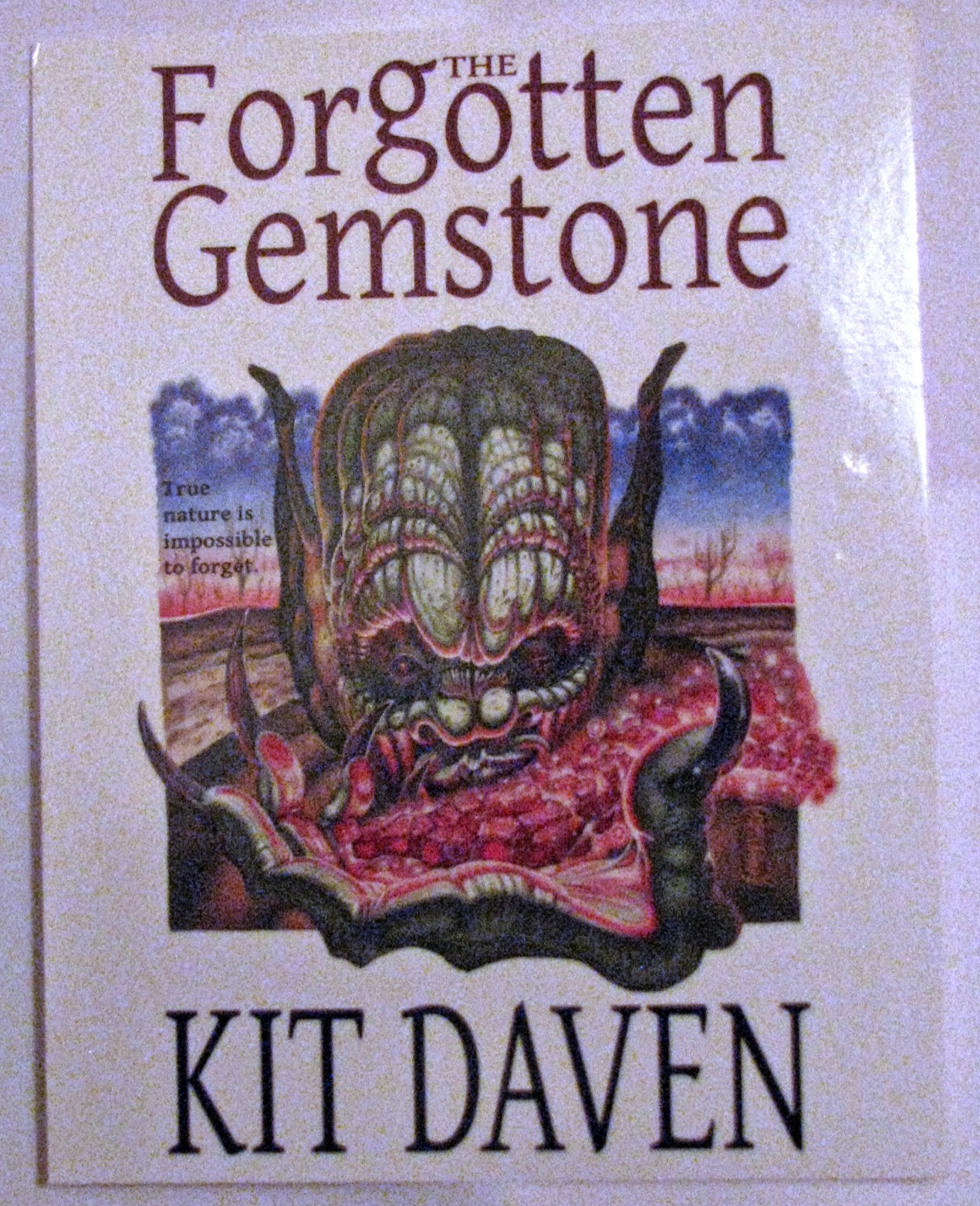 Chapell collaborated with his wife for the cover of her most recent book, The Forgotten Gemstone.  Doesn't his illustration make you curious about the story inside? 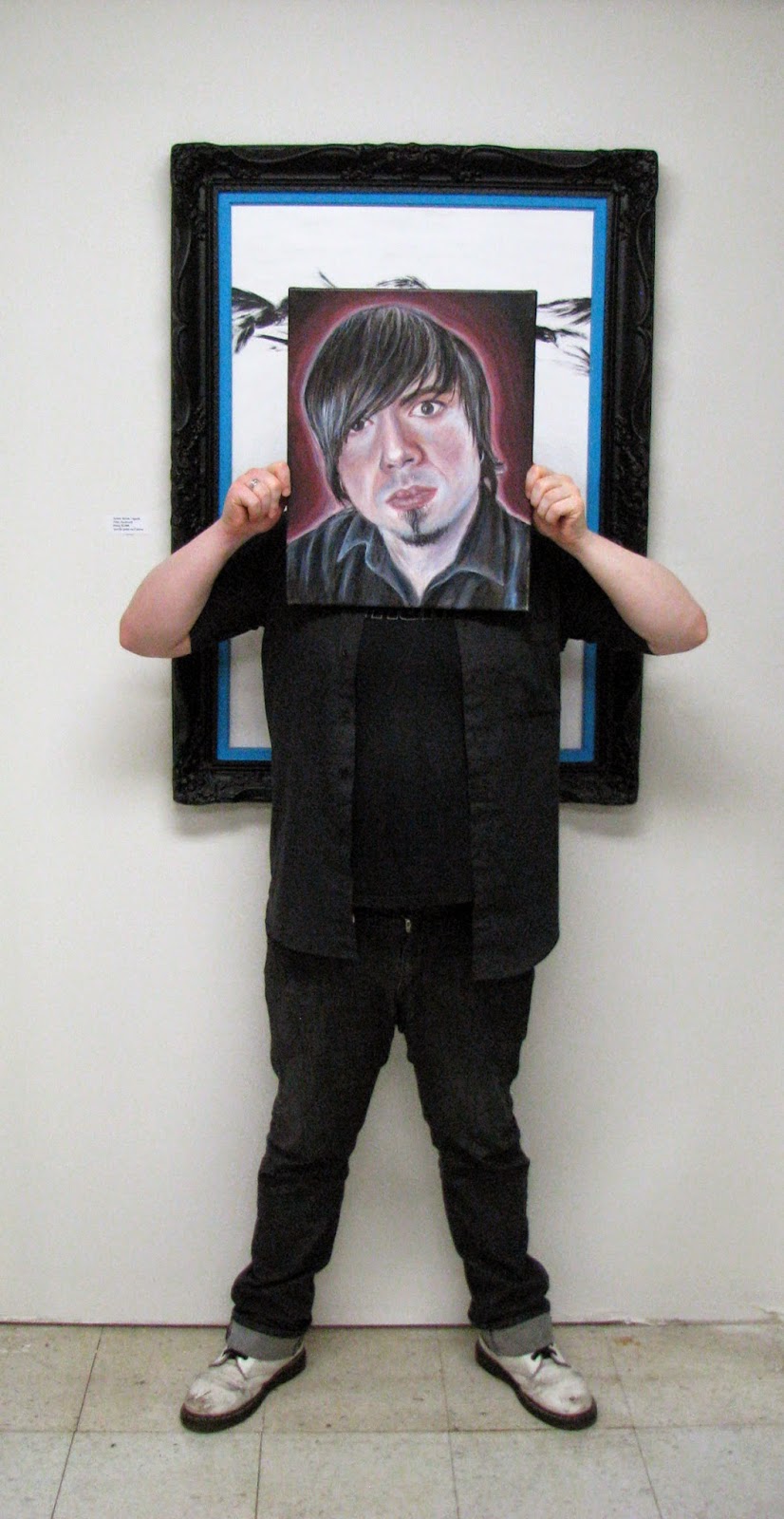 It was a relatively small turnout for the opening, and everyone seemed to know each other so it was a pretty relaxed group.  There were some laughs and general silliness; Jeremy Hobbs, who had photographs on display in the previous exhibit, had been given a portrait that was painted by a friend and it was agreed that it was pretty close to life-size (and yes, his eyes really are that large). 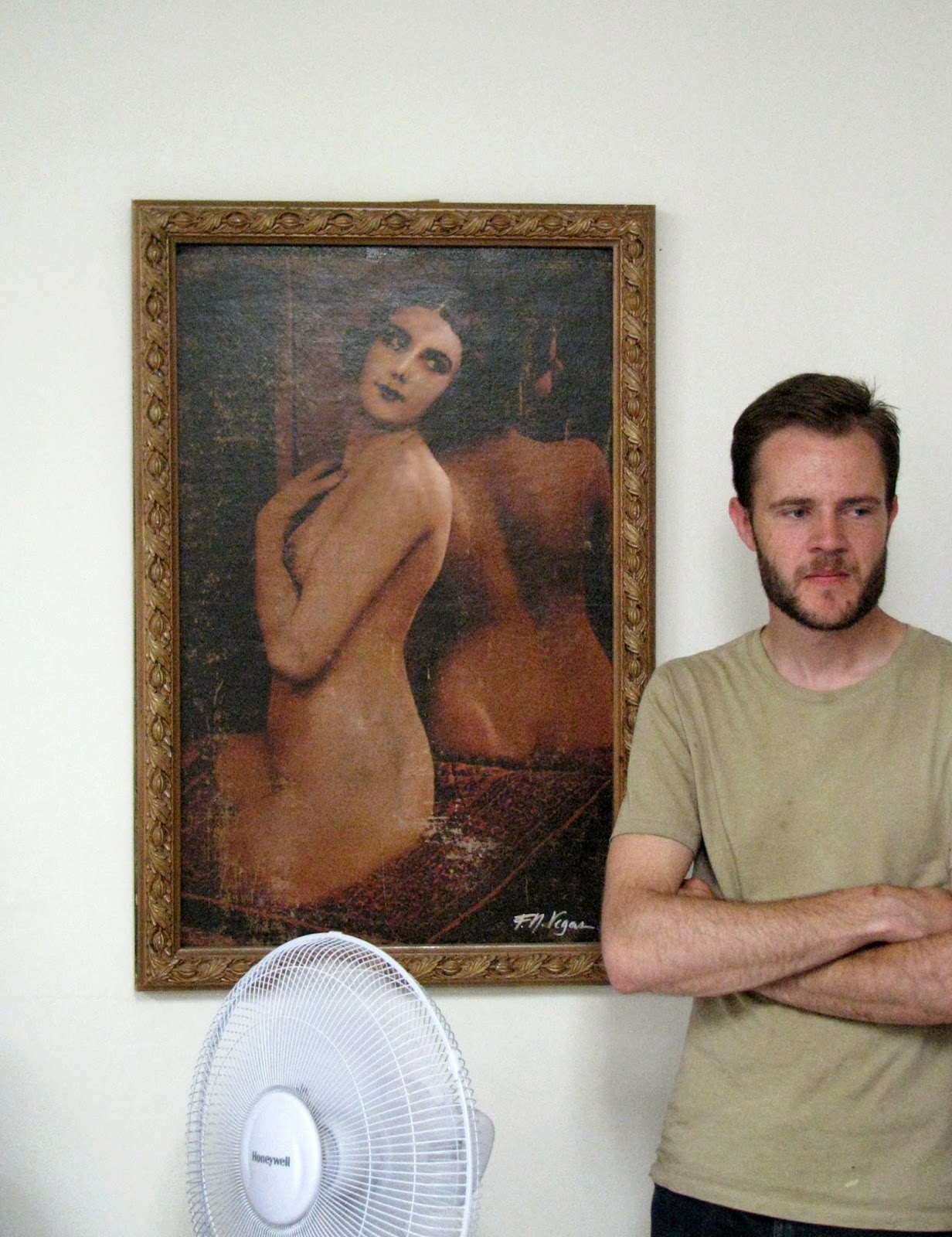 Clockwise from left:  "Dead Lorina", "Auto Erotica", and "Arachno" - all by Fn Vegas

I was extremely taken with the work by FnVegas.  Vegas transfers digitally created images onto cork, which gives the works an interesting texture (not that I touched one, but I wanted to).  Vegas has created a Tarot deck using her images, which are perfectly suited to the medium.  The women appear to be from a different time which adds a mystical, dream-like quality to the images.   I purchased unframed 8 x 10 prints of  "Dead Lorina" and "Auto Erotica", and it was difficult to choose just two - I wanted them all!

The exhibit runs until August 10th.  You can find the address of the gallery and their hours here.
Posted by Forest City Fashionista at 1:53 PM