The shopping part came first, as I set my alarm much earlier than usual for a Saturday in order to check out the Old East Village Community Yard Sale, an annual yard sale extravaganza in my neighbourhood.  This year, the weather forecast called for rain, so I thought I'd better go early rather than later, and sure enough, by the time my friend Linda and I had finished our browsing at 10 am, it started to rain. 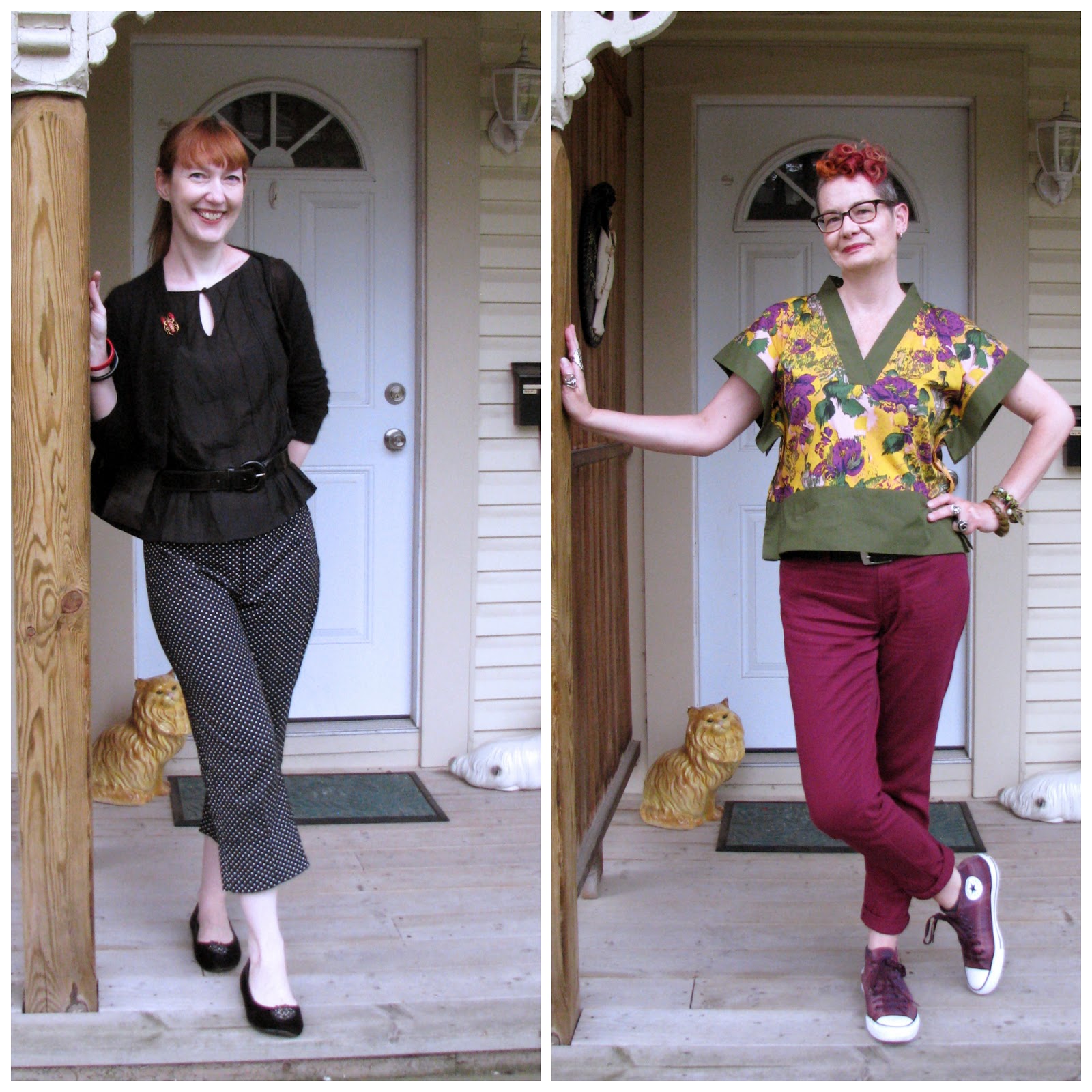 That's Linda on the left, yours truly on the right.  I explained to her that when one accompanies me on a Saturday outing, there is a mandatory photo session that happens first.  It was a bit chilly so pants were the order of the day.  Linda was chic in black, and I was a splash of green and purple.  I found the top at Jackpot Vintage, and the purple/pink jeans were a recent thrifted find at Talize. 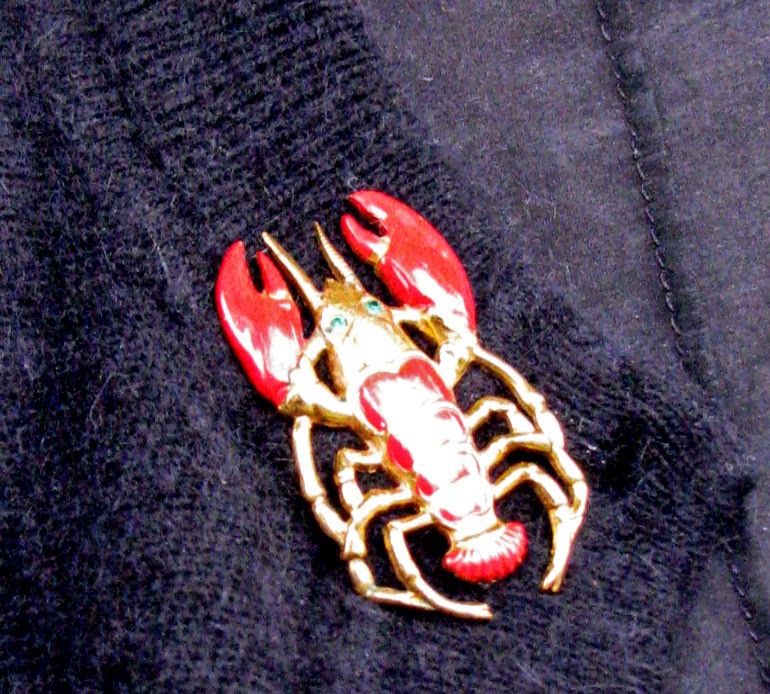 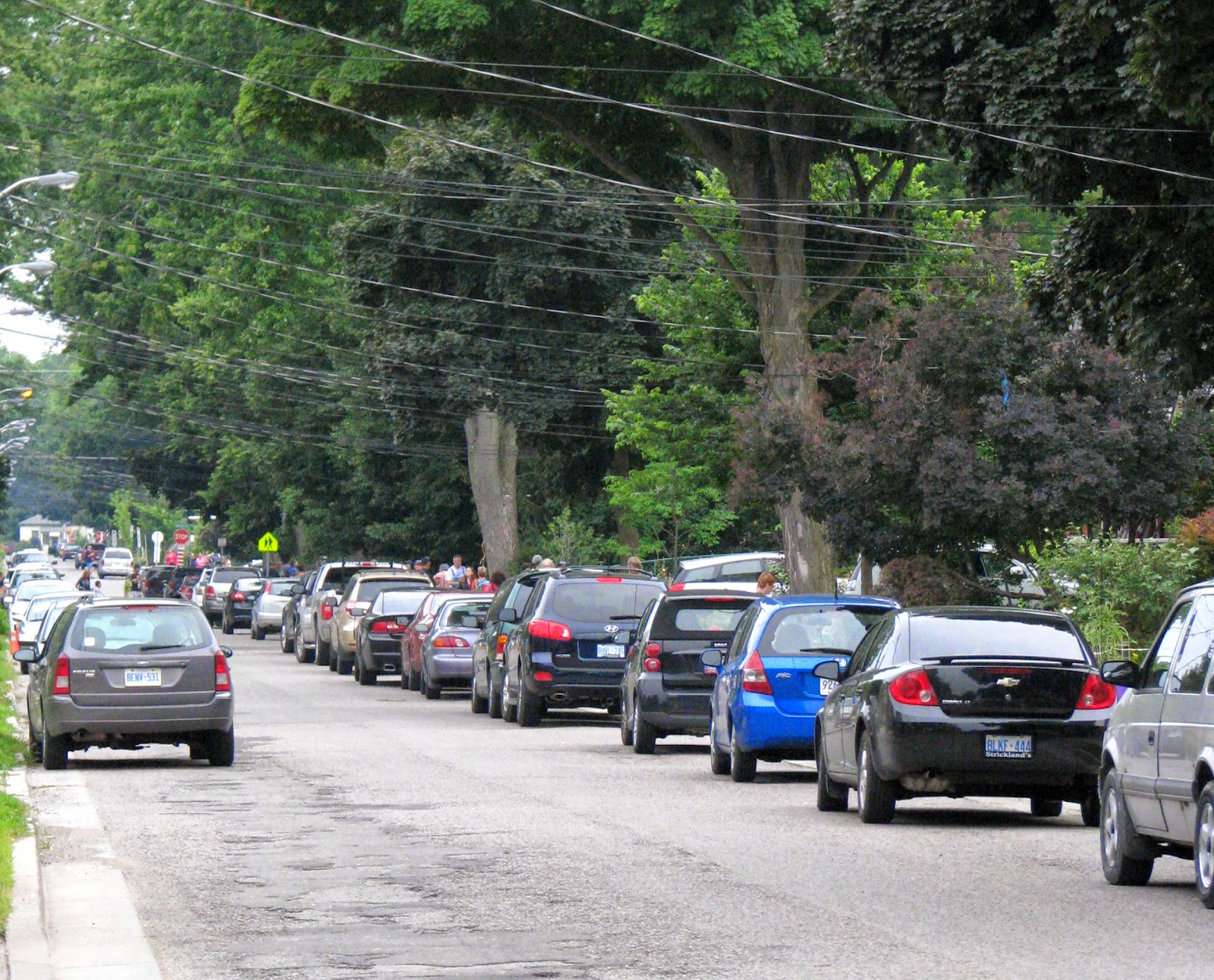 Between 8:30 and 9:00 am, most of the available street parking was taken

The sale is a real mish-mash of stuff.  There are a lot of families with children in the neighbourhood so there are a lot of used toys up for grabs.   There were also lots of knickknacks, books, dvds and even a singing fish. 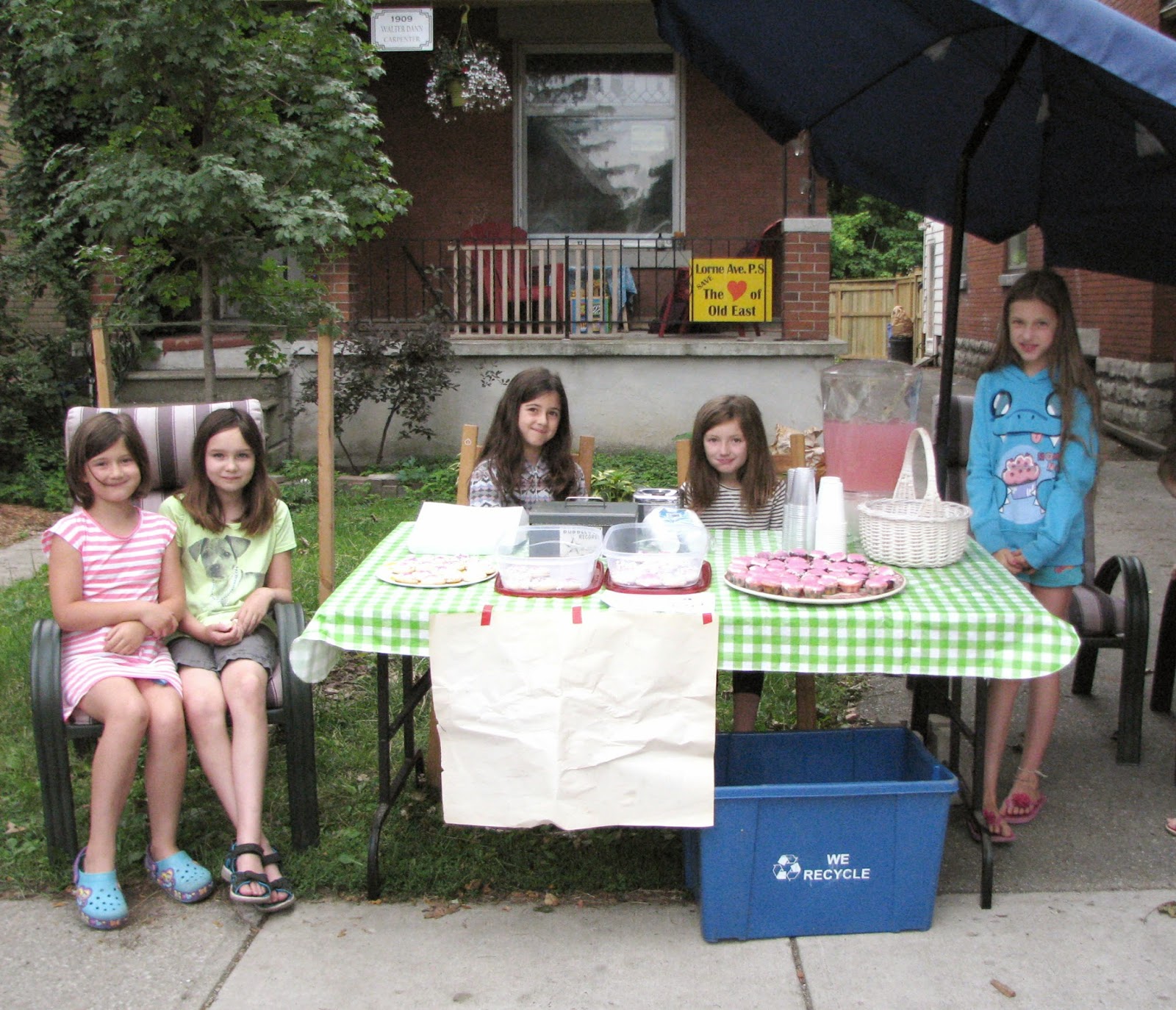 There were a number of young entrepreneurs, such as these young ladies, who set up stands along the sale route selling lemonade, cupcakes, muffins, etc.  Everyone knows that yard sale shopping requires frequent snacks. 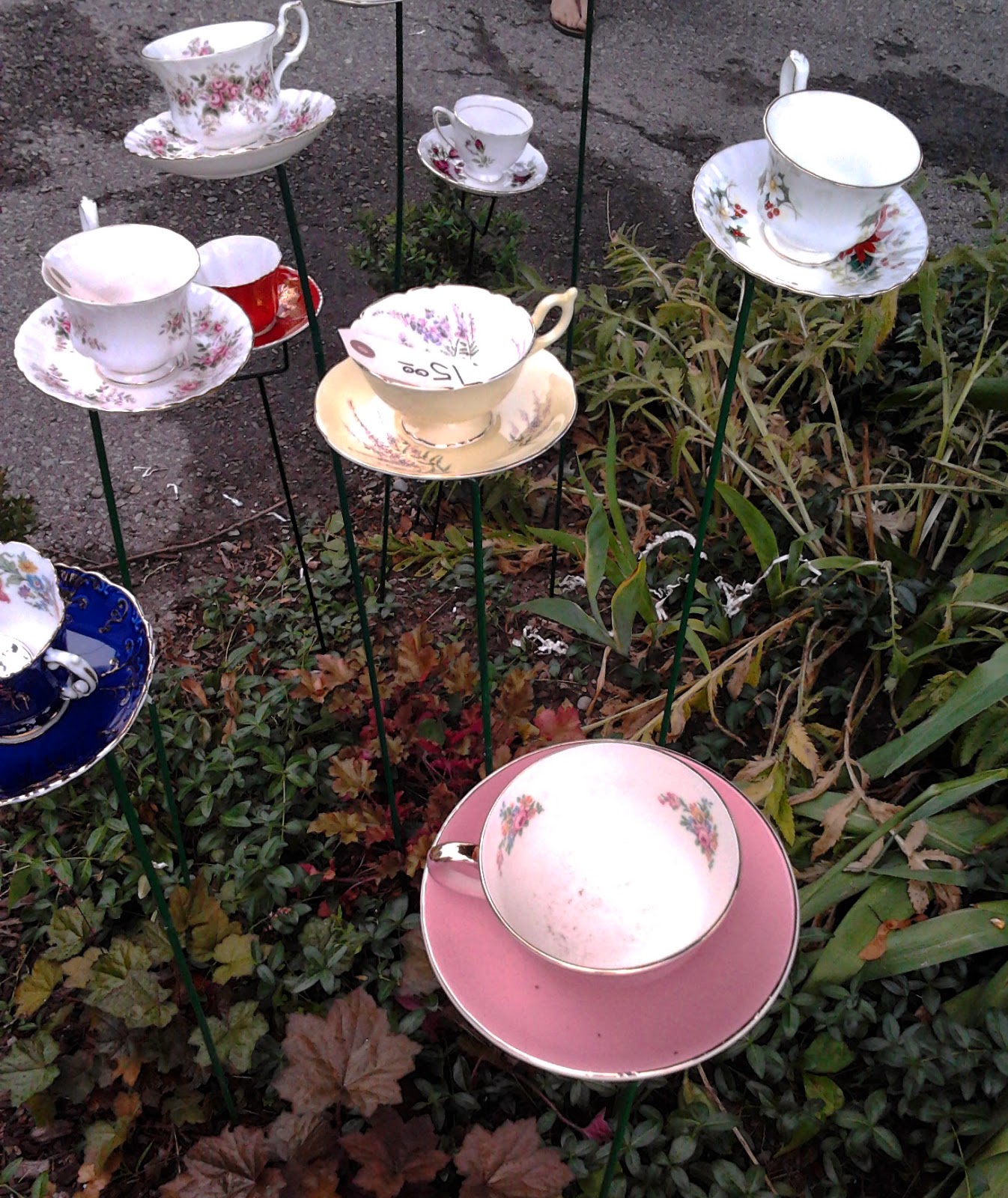 A woman had turned old cups and saucers into the coolest garden tea light holders and was selling them - what a brilliant idea! 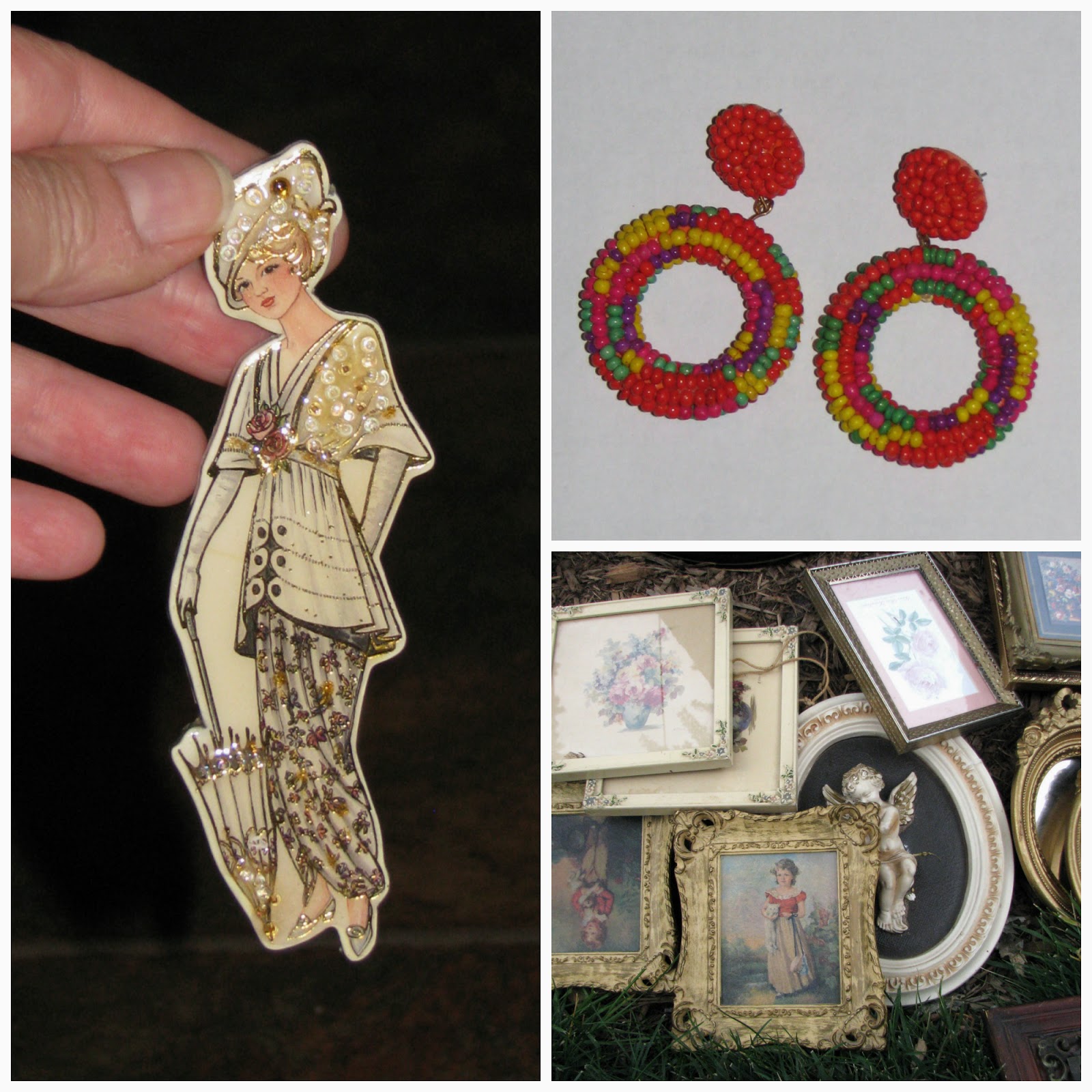 I had set myself a limit of $10, and that was all the money I had in my wallet.  I purchased a handful of fun stickers and a bag of buttons from a Serious Crafter, and then a couple of ornate wood frames from a guy who had the contents of an estate sale covering his front lawn, which consisted of all the pretty lady/flower/angel/ decor accessories you could ever want (bottom right photo).  I can't imagine there was an inch of unclaimed wall or shelf space in the original owner's house.  Linda and I had very good luck at the house with the tea cup tea light holders.  Linda scored a poodle bracelet and a pair of dead sexy heels that will look amazing with all her 50's dresses.   I thought the brooch on the left was too cute to pass up, and as I had run out of money, the lovely woman who owned the jewellery gave me the beaded 1960's earrings in the upper left photo.

This weekend was also the annual Home County Music and Art Festival, which features free performances by some of Canada's greatest folk/pop/bluegrass/roots/traditional musicians, along with yummy food, and arts and crafts.  On Friday night, I was introduced to the amazing talent that is the duo of Luke Doucet and Melissa McLelland, aka Whitehorse.  Both are former Londoners, and they received a very warm reception from the audience.  They have tremendous onstage chemistry (and offstage too, as the couple is expecting their first baby any day now), and their voices harmonize beautifully.  There is something sexy and powerful about a very pregnant woman in a clingy dress rocking out with her bass guitar on stage.  If you want to see their smoldering chemistry first hand, check out their video for the song Achilles' Desire.


Part of the appeal of an outdoor summer festival is the opportunity to choose from a variety of foodstuffs all within a few steps of each other.  Home County has always had more traditional festival fare than Sunfest, held earlier in July, but I noticed that this year, there were healthier, and more interesting options available in addition to the ever popular souvlaki and fries. 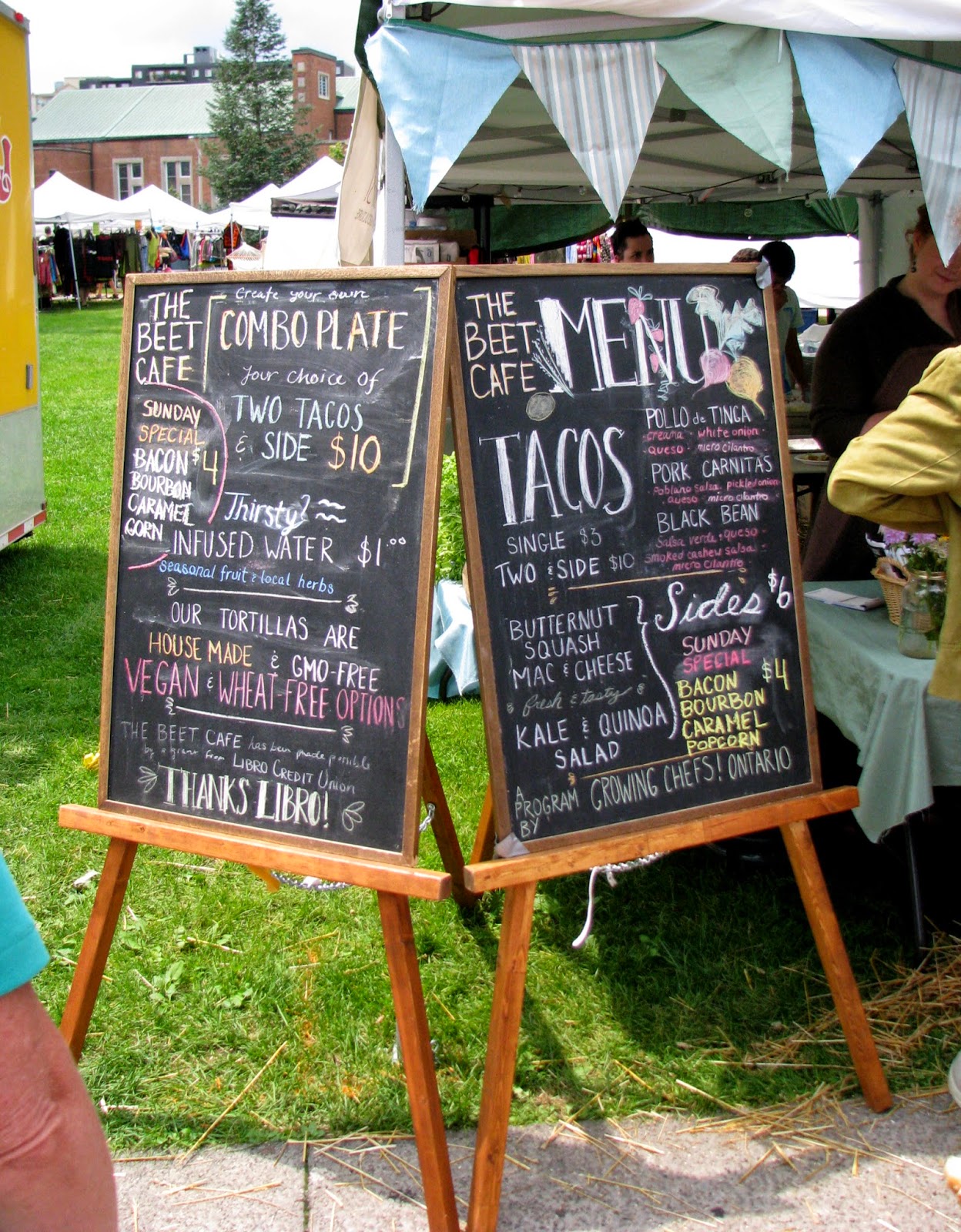 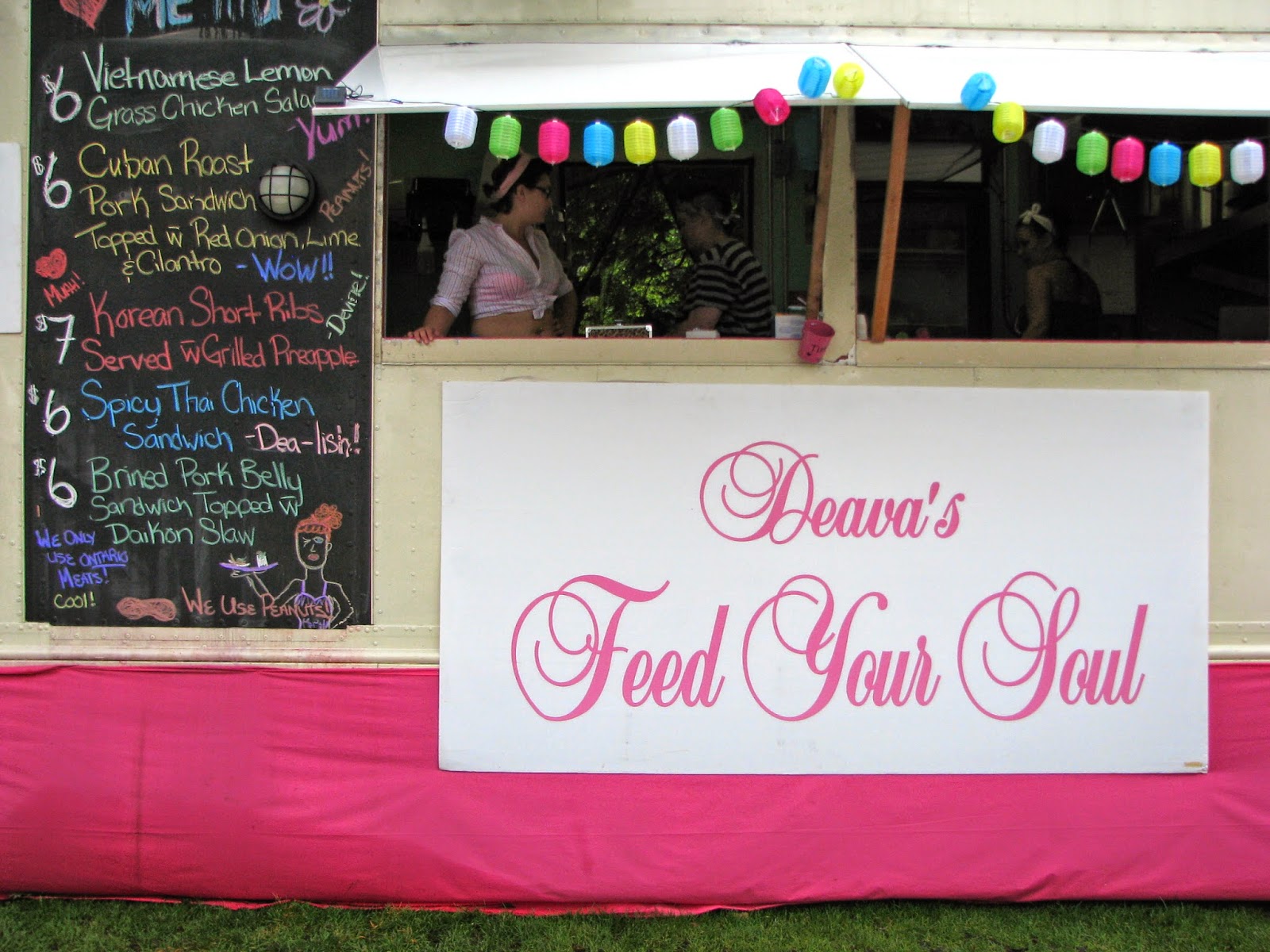 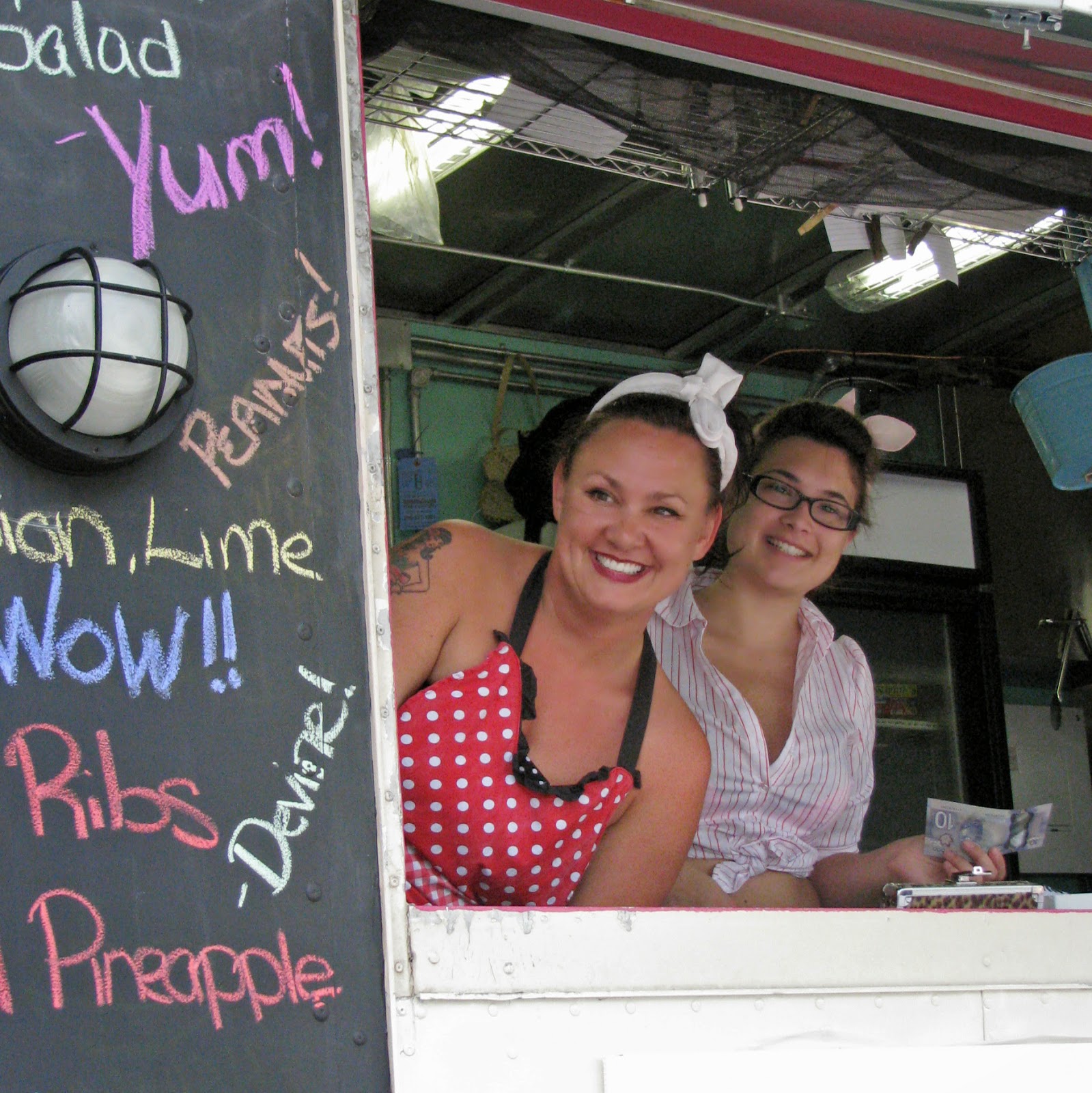 I snapped a quick shot of Deava's owner when she stuck her head out to speak to one of her staff - I love her retro pinup girl vibe! 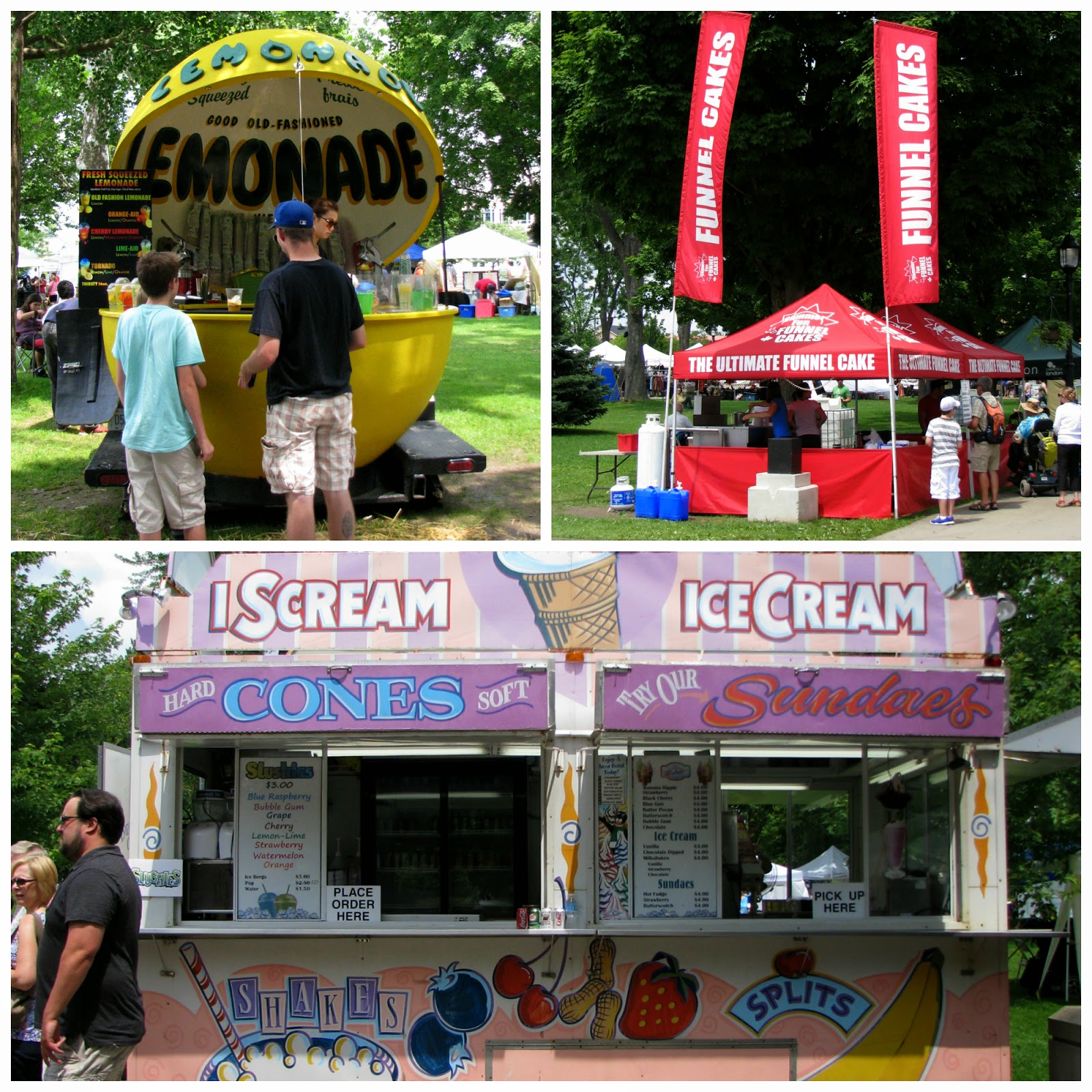 For those folks who preferred to stick to the tried and true festival treats, there was lemonade, ice cream, and the ever popular Funnel Cake (which I have never tried, and have no desire to) 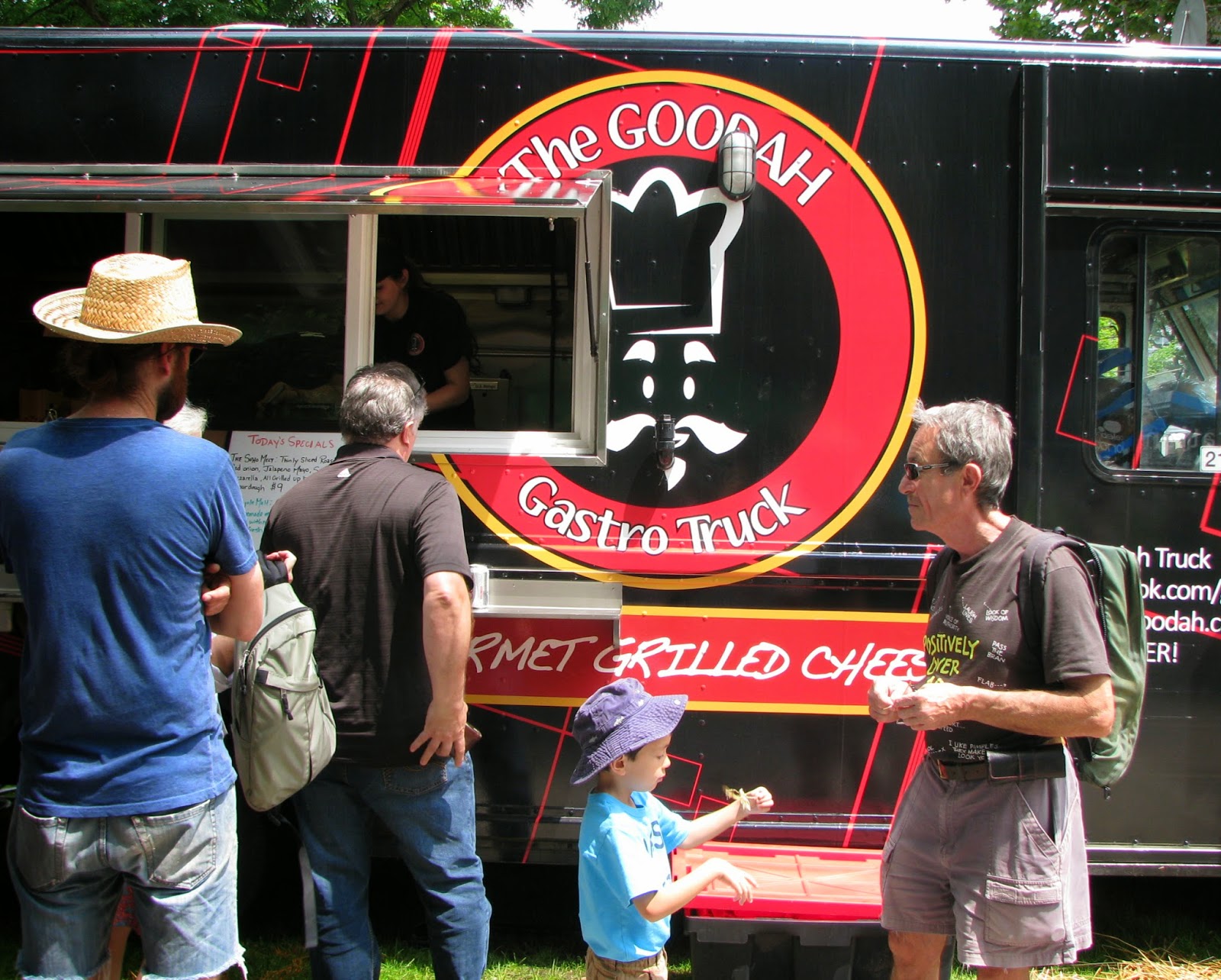 London City Council has been involved in a heated debate over whether food trucks should be allowed in the downtown core for the past several months (yes, these are the big issues we struggle with here).   I'm all for having more quick and tasty food options downtown, especially if they are like the The Goodah Gastro Truck.  I had been wanting to try one of their "gourmet" grilled cheese sandwiches since I first heard of their existence.  Grilled cheese sandwiches have been one of my favourites since I was a kid, and nothing says "comfort food" to me more than a grilled cheese and a bowl of tomato soup. 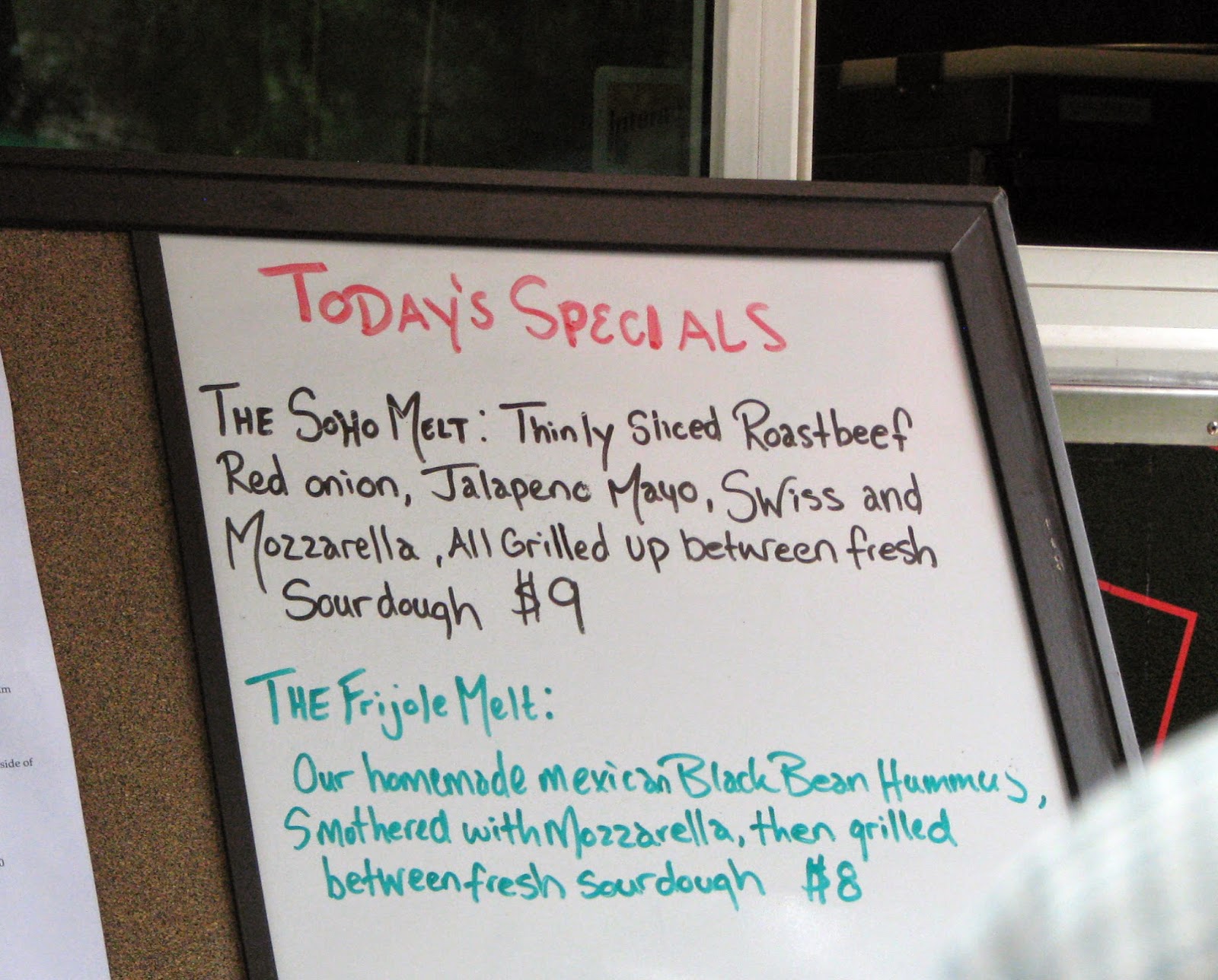 I had the Soho Melt, and it was one of the most delicious sandwiches I've had in ages

This year, Home County showcased a series of "Green Vendors", whose products and services demonstrated innovation and environmental sustainability. 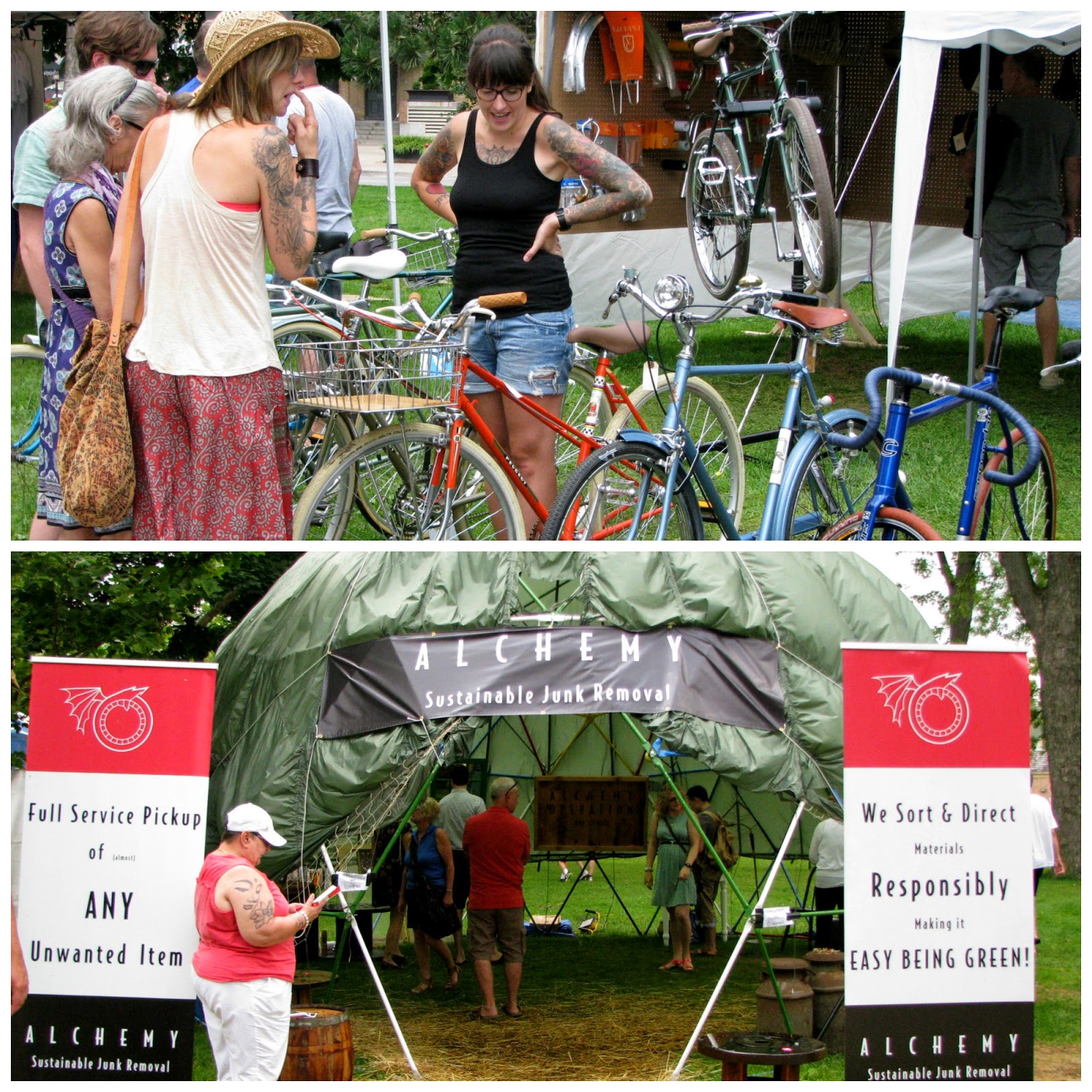 Top:  N + 1 Cycle is an owner-operated business that does bicycle tune-ups and repairs, and builds custom bikes.  They carry a range of new and vintage parts,  so you can make your older brother's long-abandoned bike road-worthy again.  Bottom:  Alchemy Operation is an independent junk removal business with the mantra of "Reduce, Reuse, and Recycle". 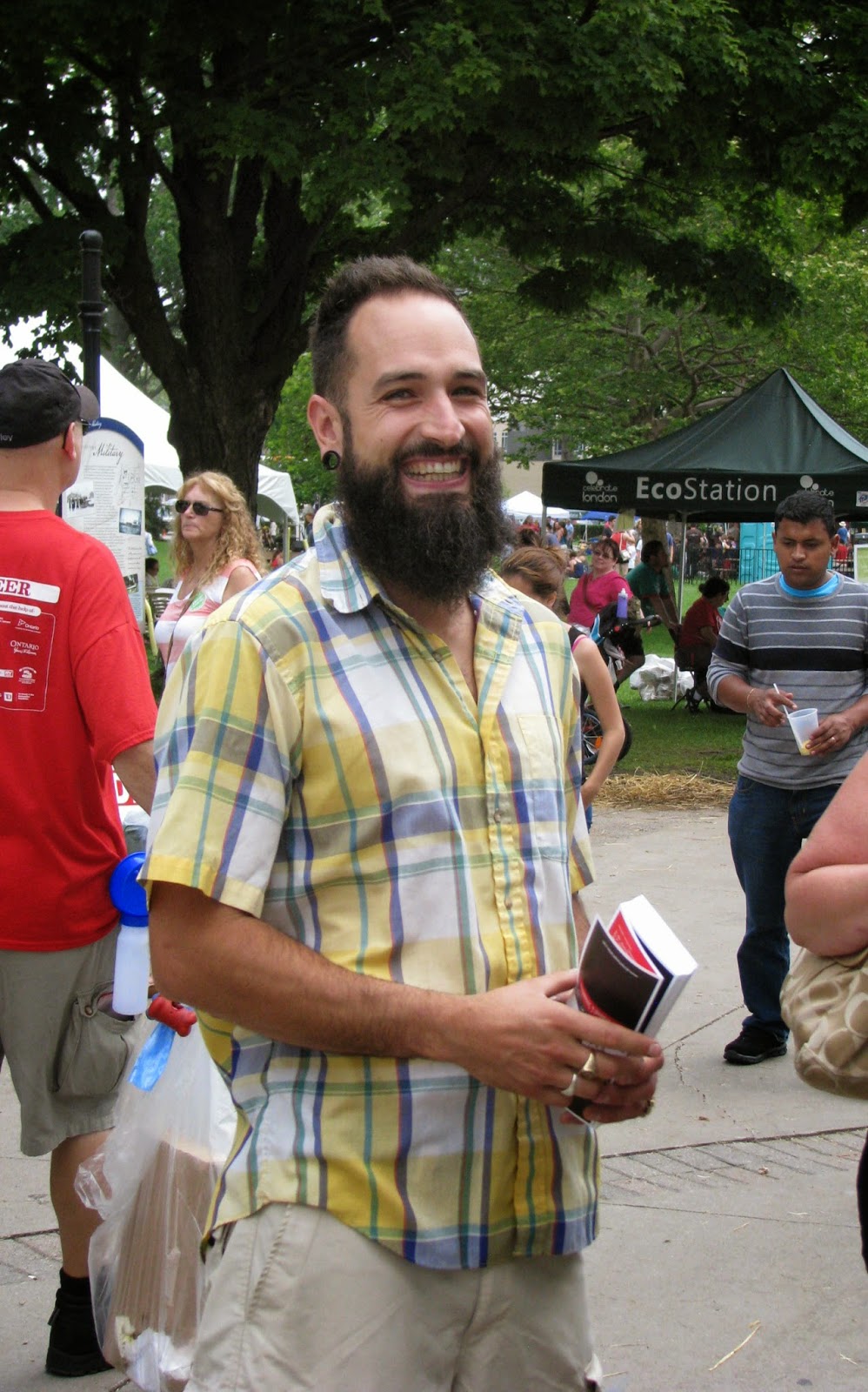 And then there was the Crafting... 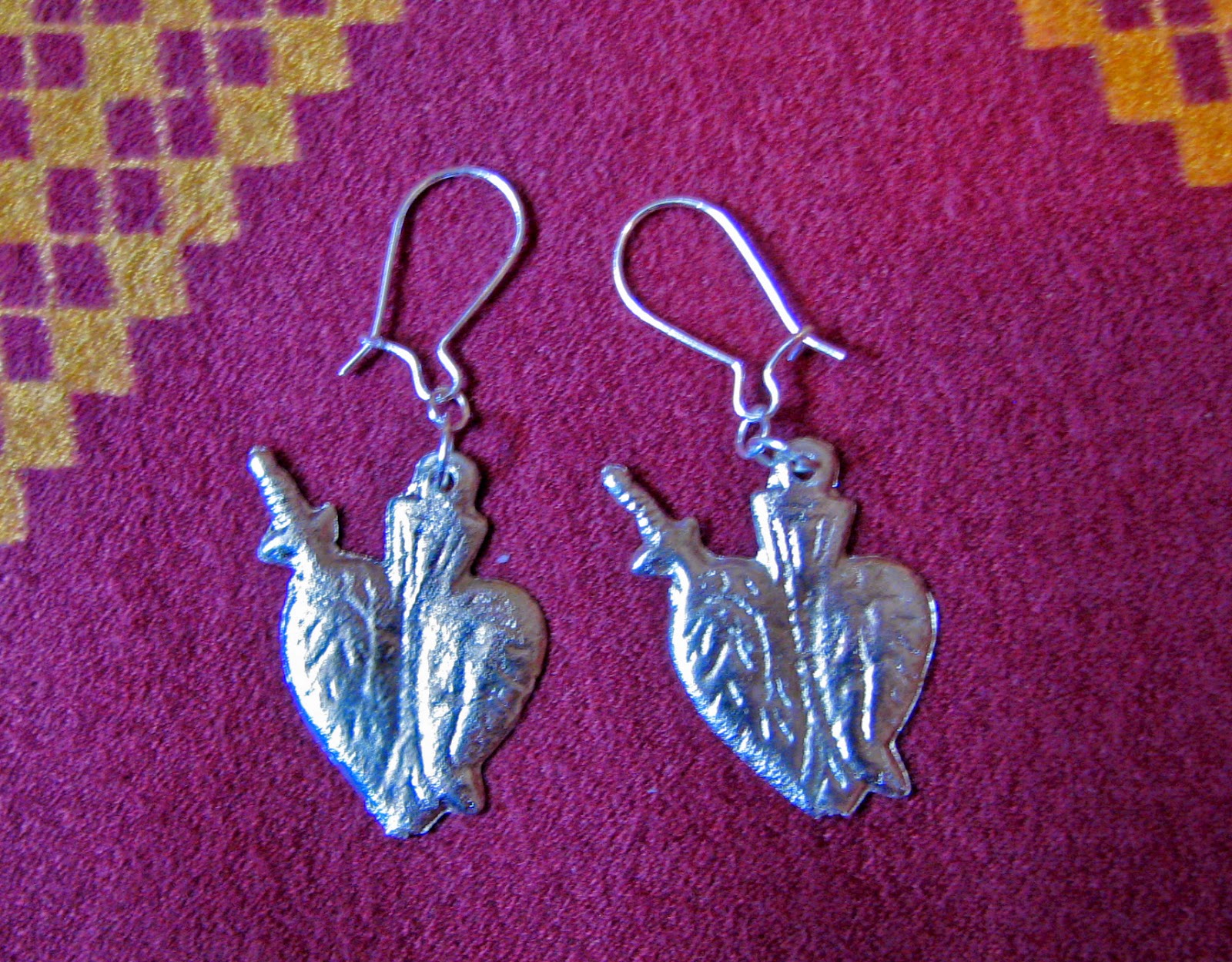 I had delusions of crafting grandeur as a child, and would throw myself into projects involving beads, sparkles, uncooked macaroni, and lots of glue, only to dissolve into tears of disappointment when the end result didn't look anything like the picture I had in my head.  My perfectionist tendencies eventually led me to abandon further attempts to "make things" (this included knitting, sewing, pottery and cooking).  I have the utmost admiration for people like Vix, who can magically turn a tea-towel into a fab summer top, or Krista, who creates colourful dioramas and jewellery.

After months of accumulating a small pile of jewellery bits that I was determined to do something with, I scheduled some crafting time with my friend Sylvie this weekend, and while she worked on a   a proposal for a client, I took advantage of the uncluttered work space available at her house to finally make the Mexican heart milagros I purchased at The Sentimentalist into earrings.  Once I sat down and got to it, it took no time at all.  Buoyed by my earring success, I moved on to gluing small pom poms onto an eye mask, which hopefully will be part of a costume for an event later this summer.  It wasn't much, but at least there were no tears.

Whew, that was a long post.....So how was your weekend?
Posted by Forest City Fashionista at 11:46 PM