You Got A Face With A View

We in Canada have a sort of long weekend because of Canada Day on July 1st, and those who planned ahead and were able to book the Monday off get a four day break.  I have had this week booked off as vacation time for quite a while, and have been looking forward to a chance to get some things done at home, and then be able to relax and listen to some great music at Sunfest, our Festival of World Music, this coming weekend.  I've been feeling much better the last couple of weeks, and have been trying to focus on positive things, and be grateful that most of the time, I lead a relatively drama free, interesting, and independent life.  There have been a number of things that made me smile this past week:

Flowers and Hair in Pretty Colours 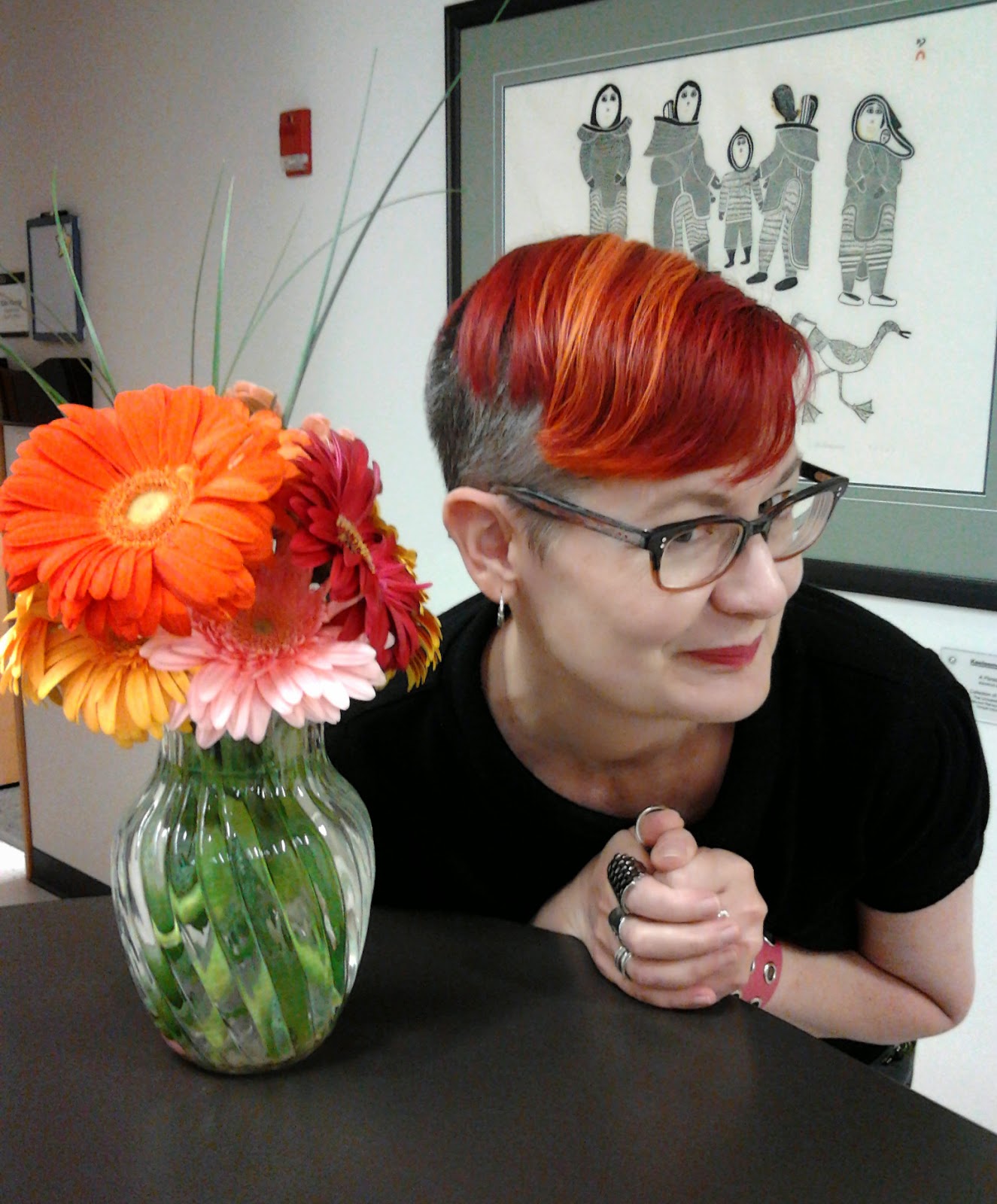 I got my hair coloured last week, and to my delight, I  matched these Gerbera daisies on the front desk at work. 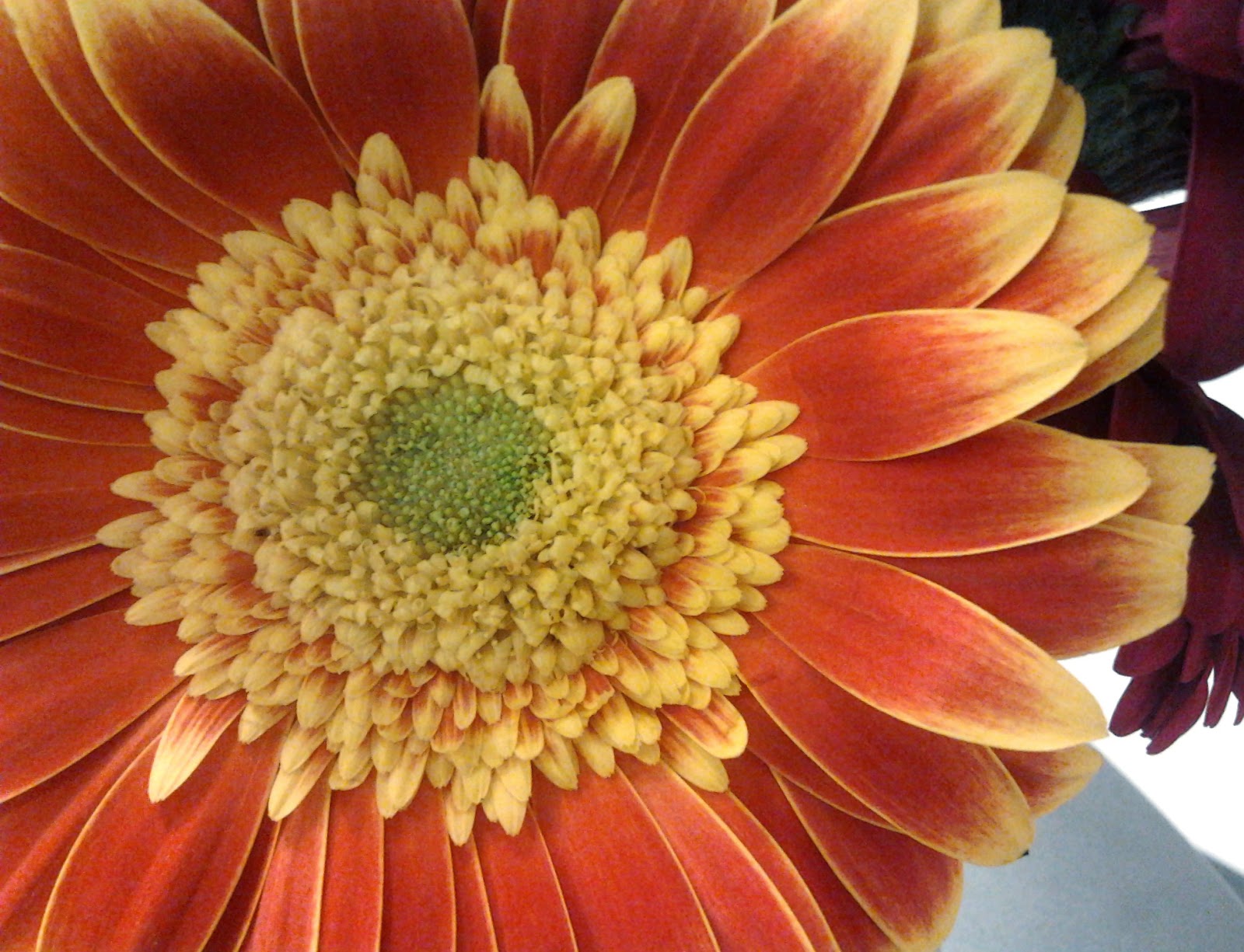 Gerberas are one of my favourite flowers - I love the rich colour variations and their big, open faces (of course flowers have faces). 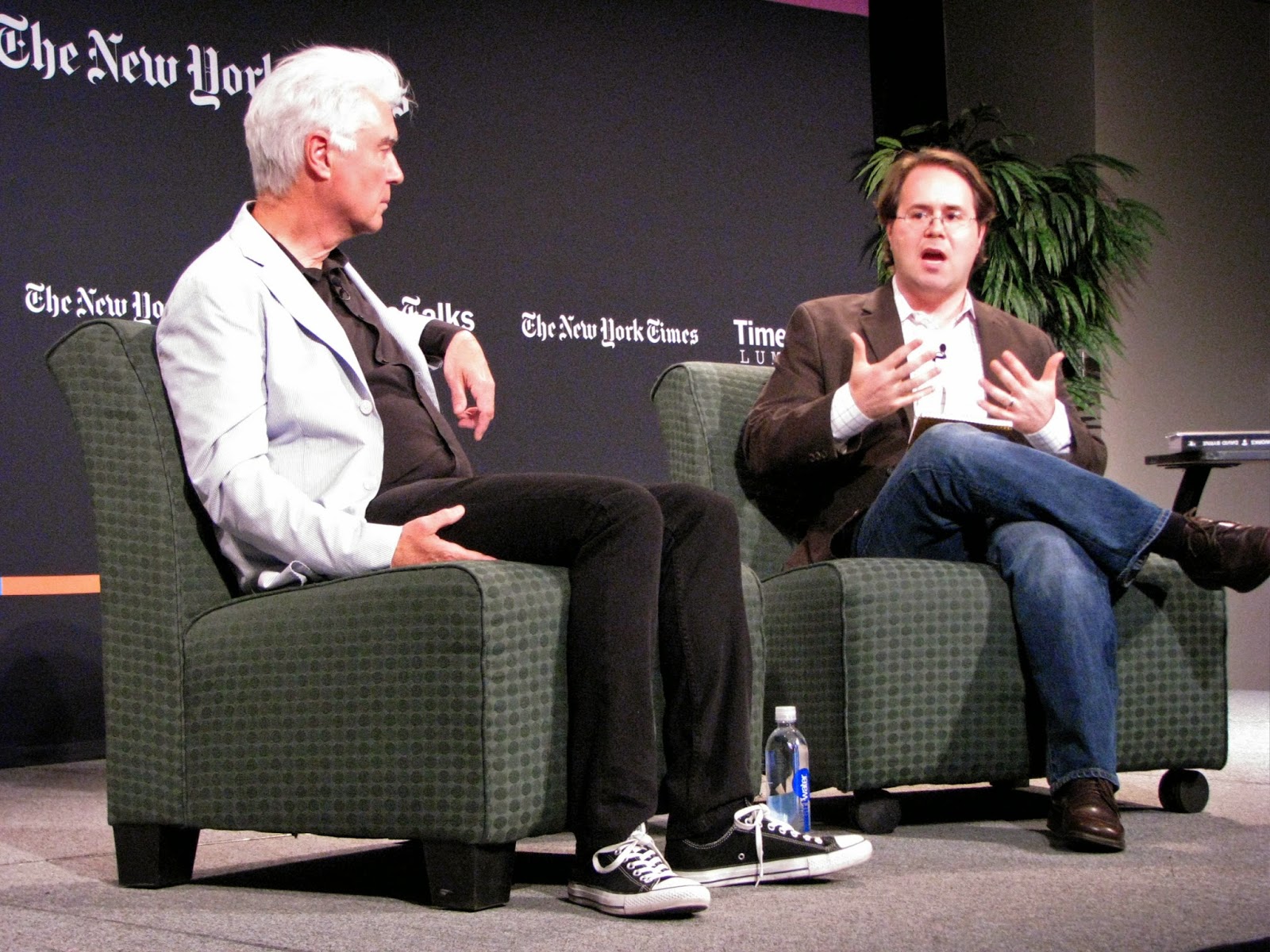 I saw David Byrne being interviewed by Ben Sisario, who writes about music for The New York Times at the Luminato Festival.  I have admired, and had a crush on, David Byrne since I first discovered his band, The Talking Heads, back in the 80's.  I still have most of their albums, on vinyl.  Byrne is articulate, thoughtful, and not afraid to express his opinion.  During the interview he  was very critical of music streaming websites, primarily because the streaming royalties that artists receive are minuscule, and being able to listen to the music of your choice, for free, discourages people from purchasing CDs or paying for downloads.  He stated that he believes that the days where musicians could actually make money from recorded music are past.  He talked a bit about his book, "How Music Works", which I found to be a fascinating read, and the musical he wrote about Imelda Marcos called Here Lies Love. 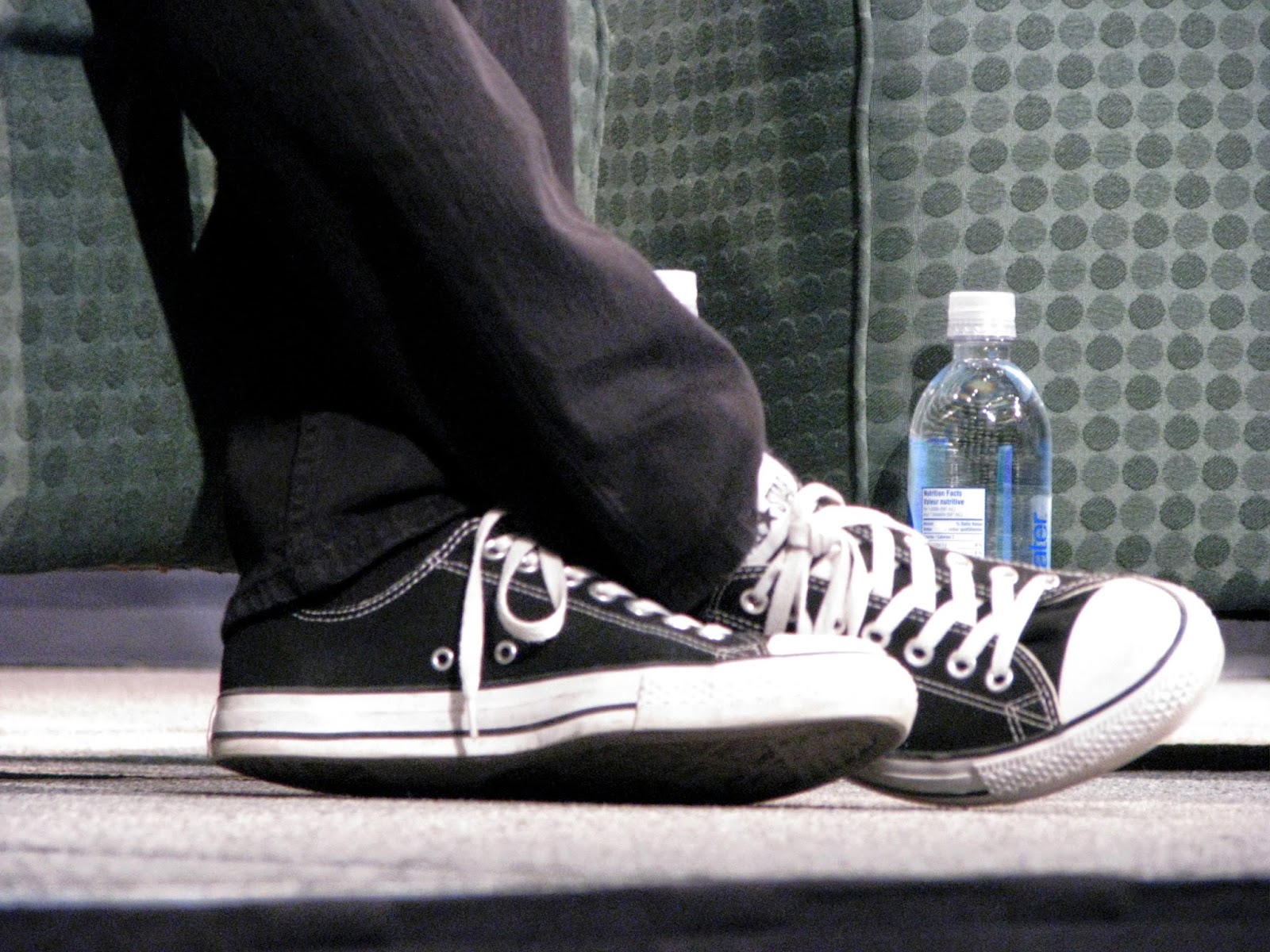 I sat in the front row and as there wasn't anything said, or posted, about not taking photos, I took a few, including one of Byrne's Converse.  I always thought he was one of the coolest men on the planet, and his footwear confirms that. 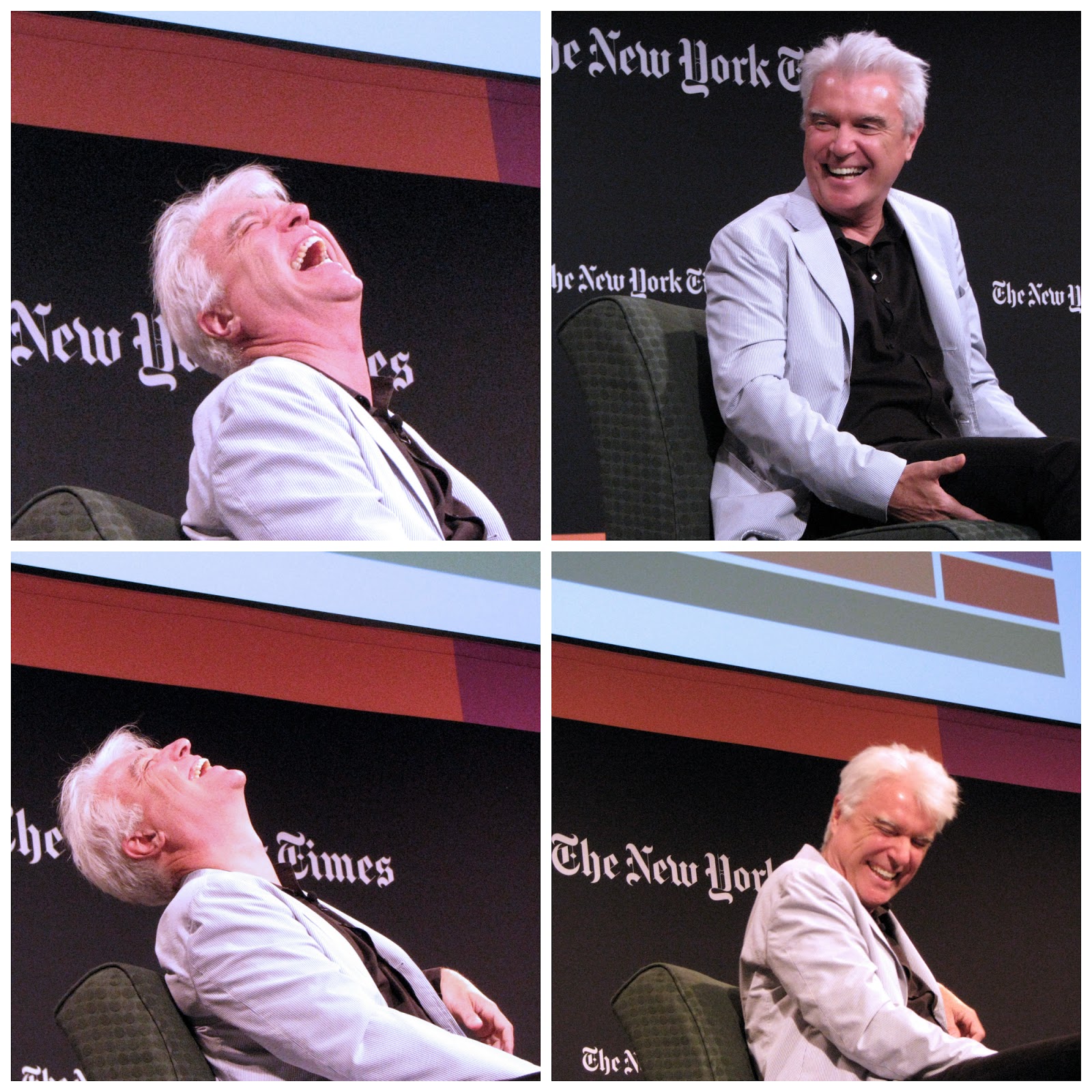 The other thing I learned from the interview was that David Byrne has the best laugh - a completely un-self-conscious, throw your head back, open-mouthed laugh.  Made me love him even more, if that was possible. 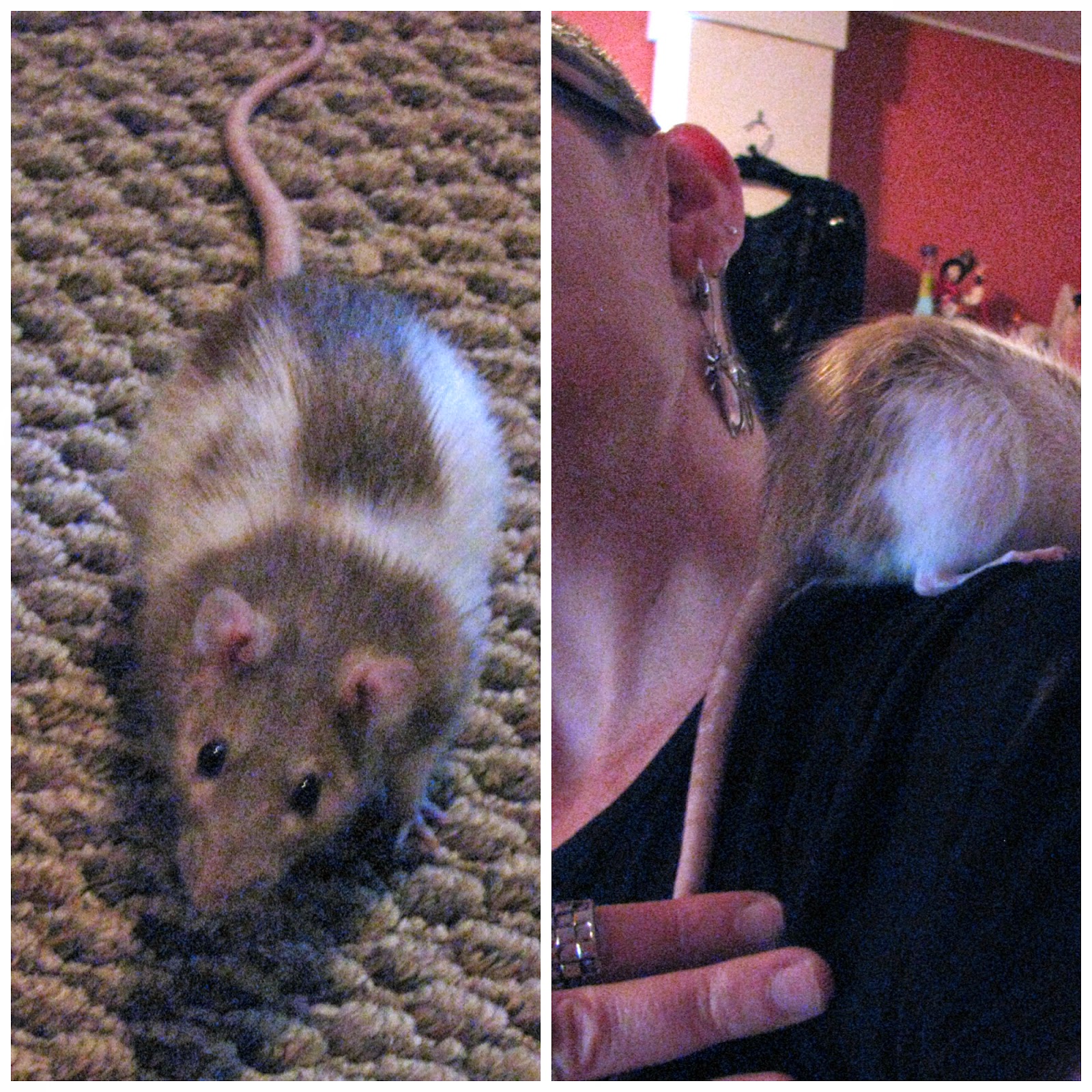 Fred (aka The Bun) has been through 4 weeks of antibiotics and seems to be doing fine - she's full of piss and vinegar and wants food ALL the time but I have to be careful - when she was weighed at the vet's office she was at the high end of her normal weight.  It sucks when you only weigh 25 ounces and you STILL have to watch what you eat!!

A Day Out With A Good Friend

Heather and I spent part of Saturday together and managed to fit in a trip to the Western Fair Farmers' and Artisans' Market, Tacos at Rock Au Taco, a visit to a consignment store, and ice cream!
A day like that required a good outfit..... 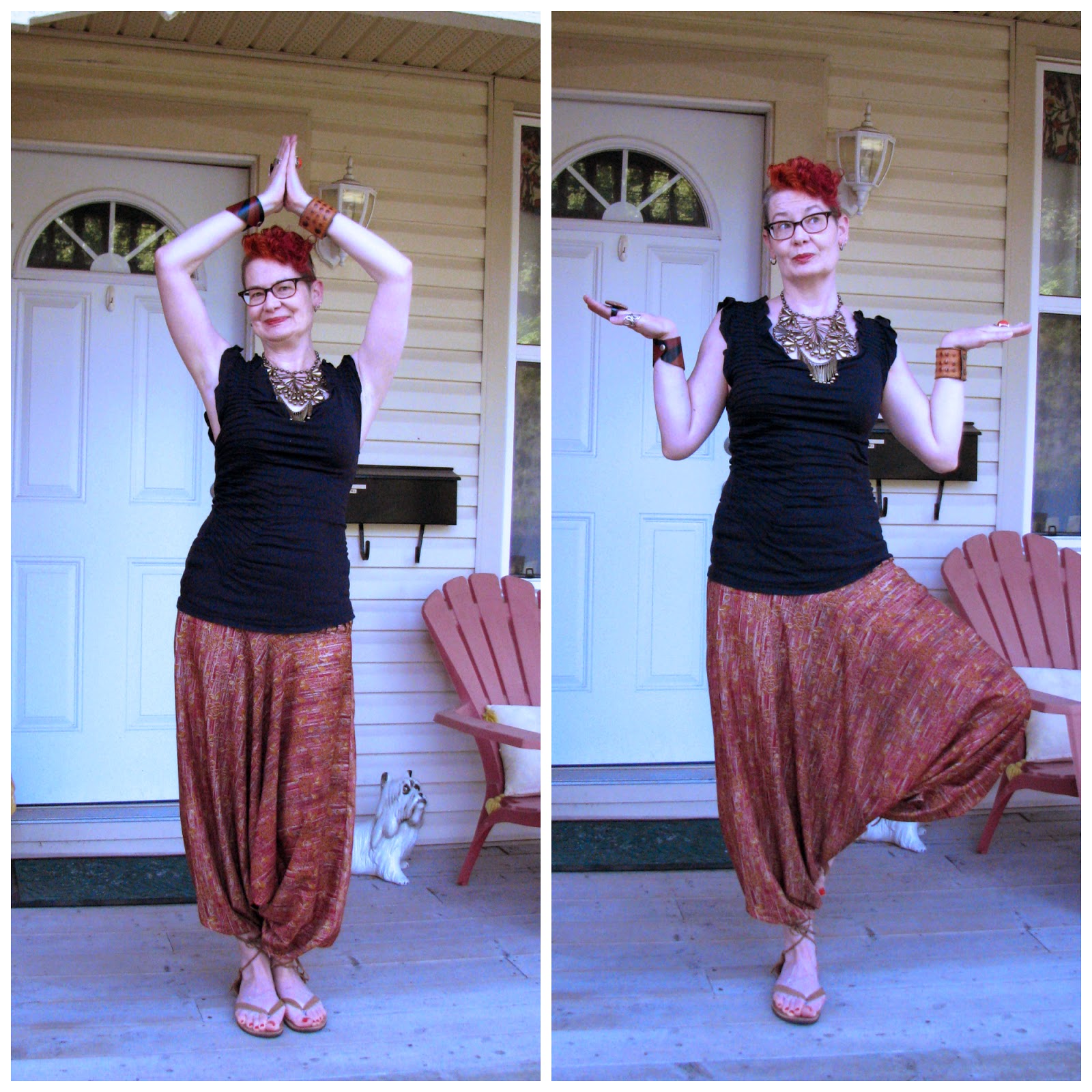 I got these silk harem pants off the sale rack at From Mars a couple of years ago, and they are the most comfortable things to wear on a hot, sticky day.    I love this navy t-shirt with all the stitching detail - it makes me look like I have curves when I don't actually have any. 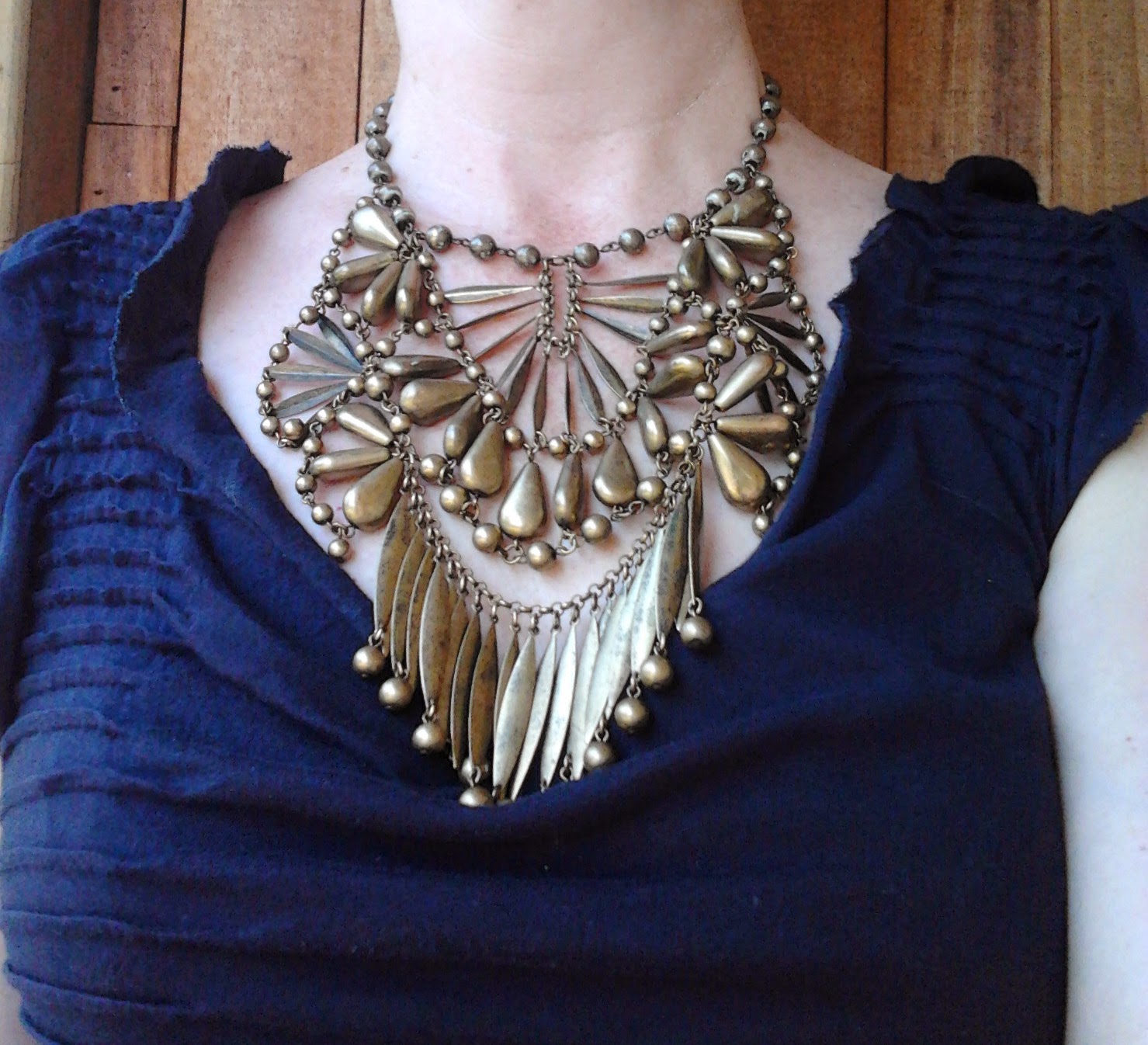 I finally found the right outfit with which to wear this funky necklace I found at a Housing Works Thrift Store in New York when I was there last fall.  It fills in the low neck of the t-shirt perfectly. 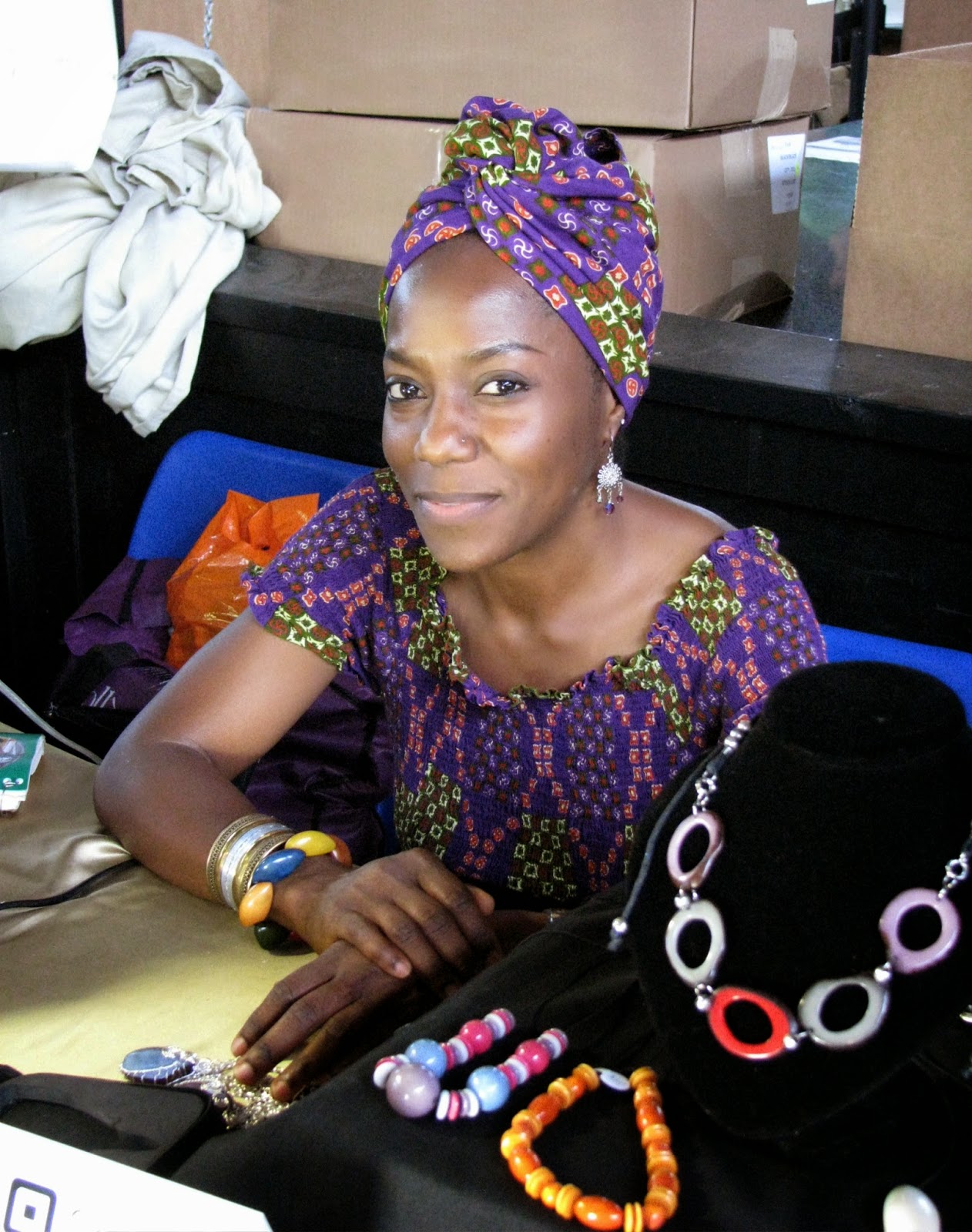 I loved the colours in this woman's dress and matching headscarf.  She makes and sells jewellery made of "Vegetable Ivory", or,  Tagua Nut, which is the dried seedpod of the Tagua Palm Tree.   Her business is called Mayoso Designs.

After we filled our faces with Tacos, we headed off to Style 360, a consignment store that neither of us had visited, but had been mentioned to me by many people.  We spent a good hour and a half browsing, and were impressed with the selection and quality, and with the personable staff.  I'll be showing off the skirts I purchased in future posts, and we will definitely be going back. 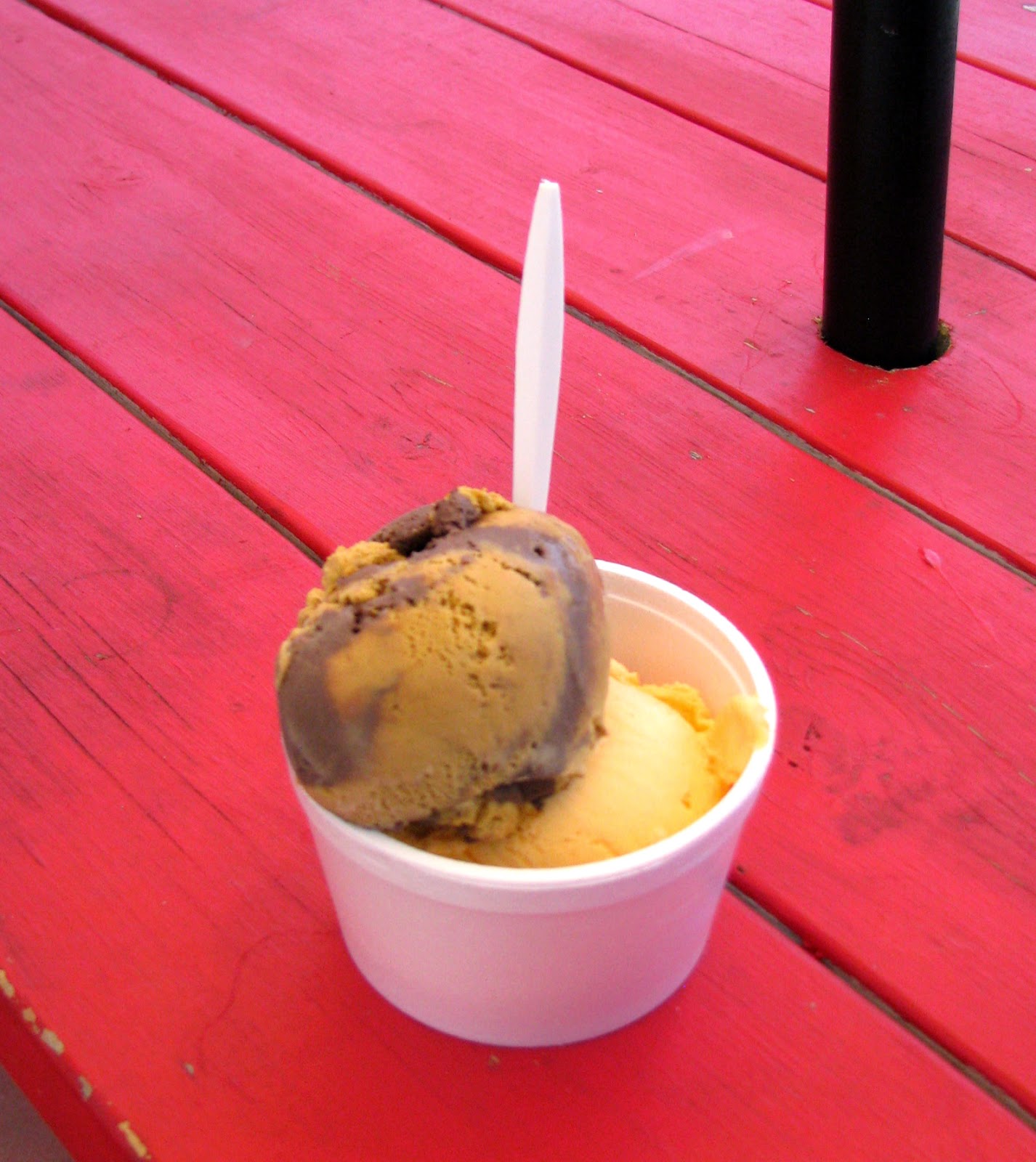 I rarely eat ice cream, as it doesn't agree with my stomach, but I will indulge once or twice in the summer.  We found a small ice cream wagon and I had a scoop each of Chocolate Peanut Butter Cup and Mango.