I was in Toronto on Father's Day to see a couple of Luminato events, and after getting some lunch I decided to go for a walk as it was such a gorgeous day.  I turned the corner onto Bloor Street and stumbled onto this.... 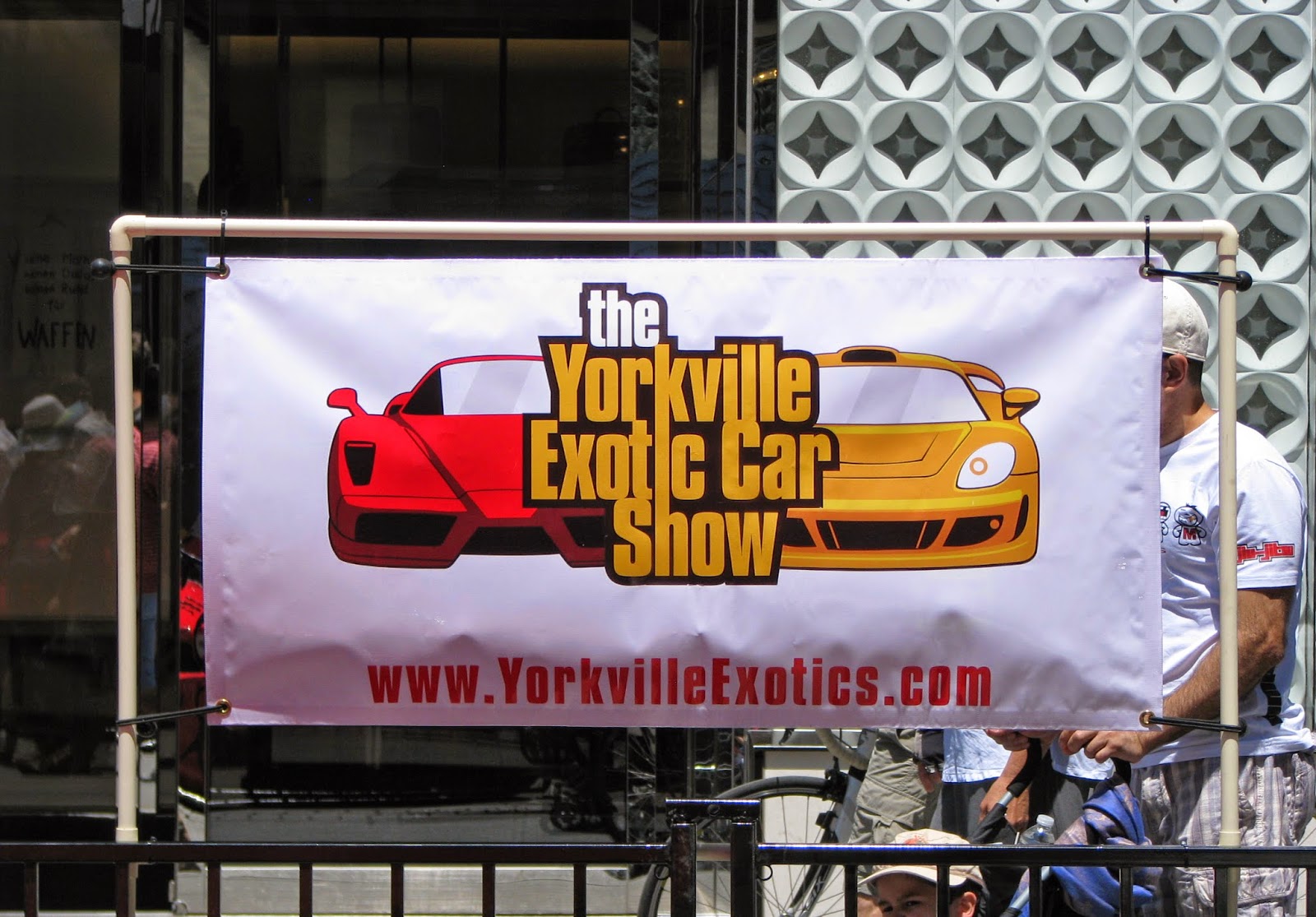 I'm not a "car person" -  I don't own one, or have my driver's license.  I realize they come in handy for getting places not serviced by public transit, and can make a trip to the grocery store much less of an ordeal, but I believe that everyone is safer if I stay a pedestrian.  I did get my beginner's license when I was 16, but one in-car lesson with my father was enough to convince me that I wasn't ready to be a driver.  When I turned 40, I tried again, and even took in-class and in-car lessons.  I found that while I was able to drive a car,  I was so anxious every time I got behind the wheel, my phenomenally patient driving instructor gently suggested that I probably couldn't afford the number of lessons it would take to get me comfortable behind the wheel.

However, I can appreciate a beautiful car as an aesthetically pleasing object, and there were some very beautiful cars in this show.  There is no admission charge to wander up and down the red carpet on Bloor Street and check out the fancy wheels. 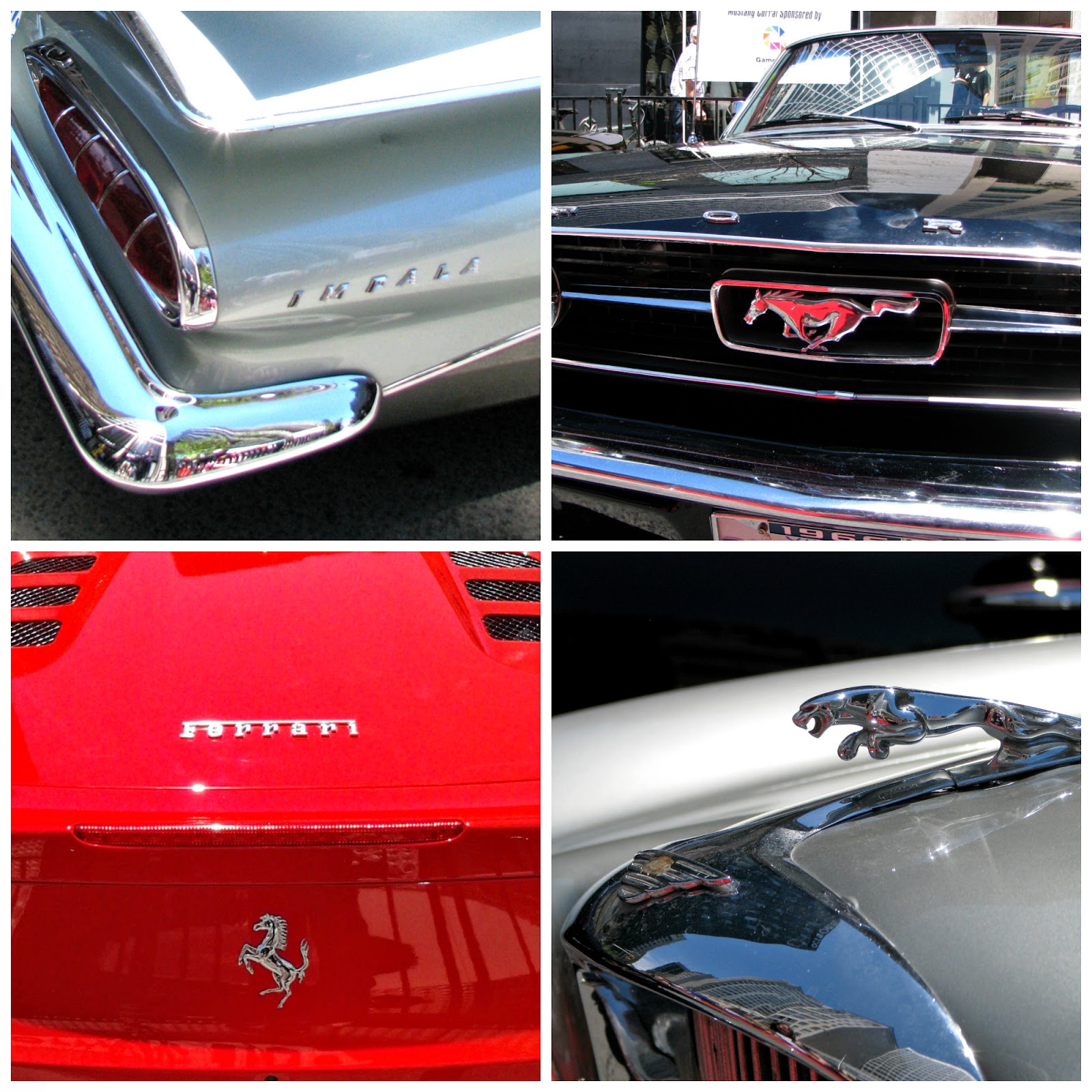 .....and some very fancy wheels they were: Ferraris, Porsches, Mustangs, Jaguars, Mercedes, Corvettes, Lamborghinis, BMW's and even a '007 Aston Martin 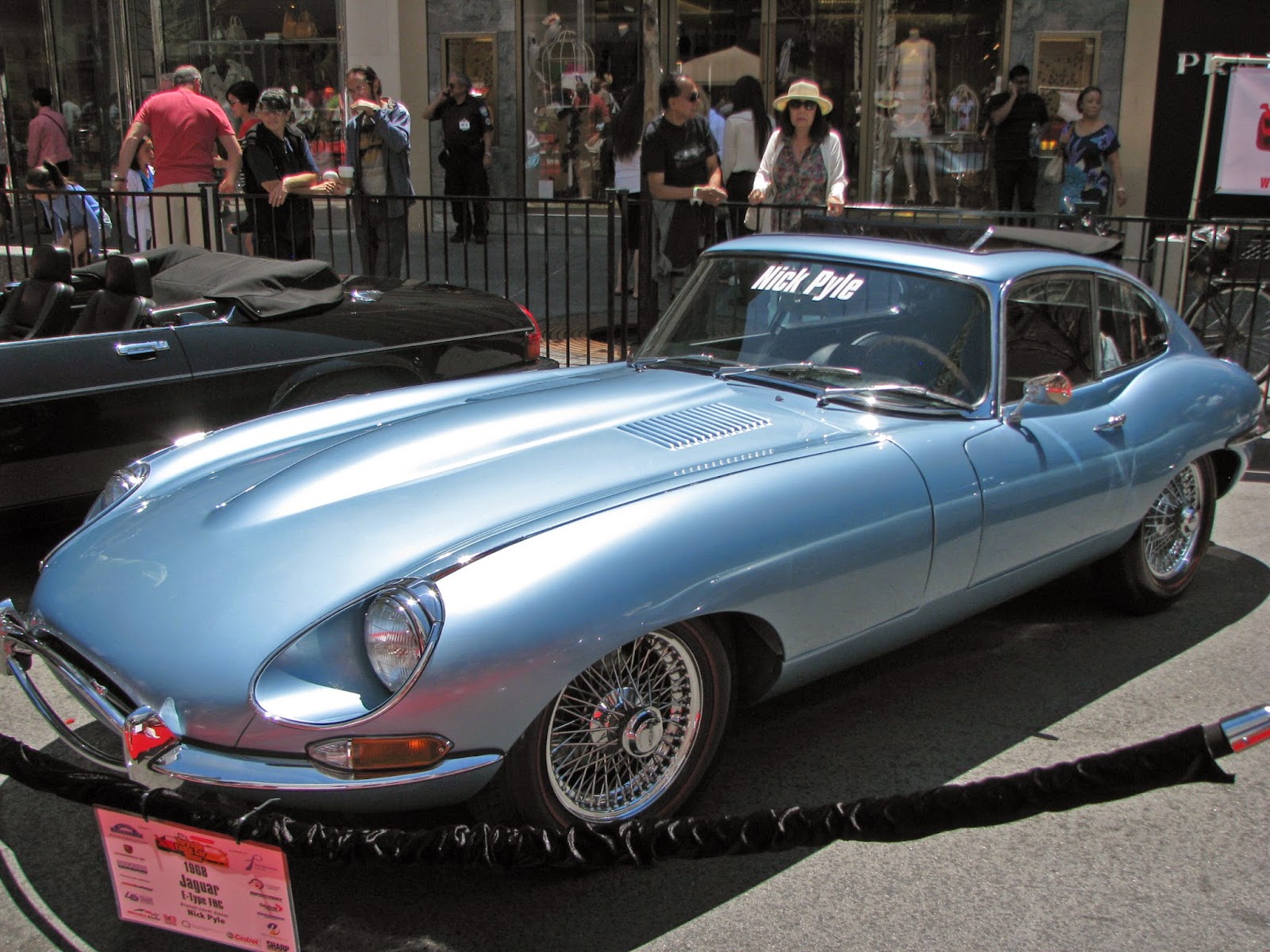 The sleek lines of this 1968 Jaguar made it one of my personal favourites.  I prefer cars made before 1960 just because of the lines, and all the chrome.  I don't know one engine from another, but I know what looks pretty! 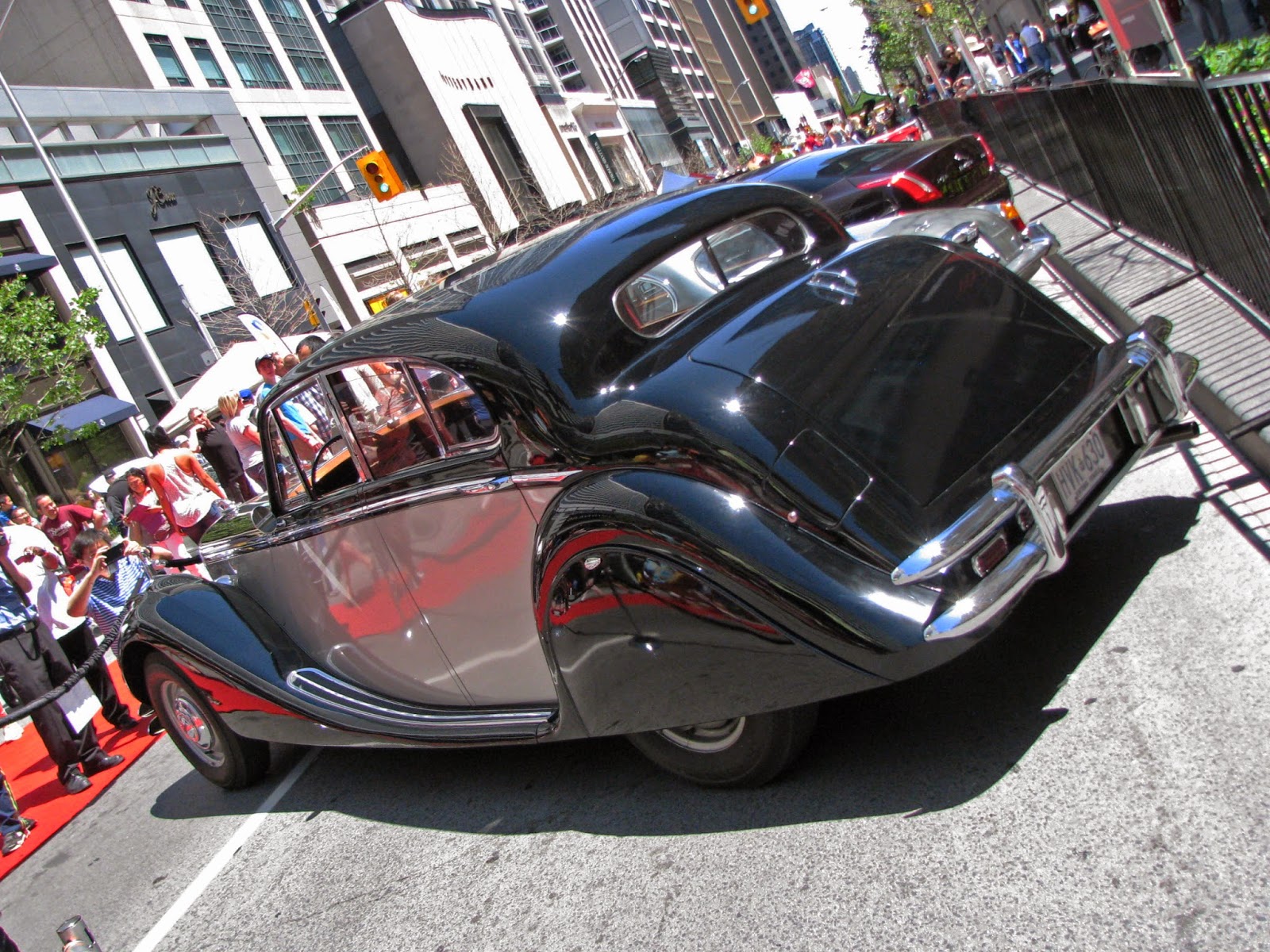 It made this 1950 Jaguar MK V look downright clunky 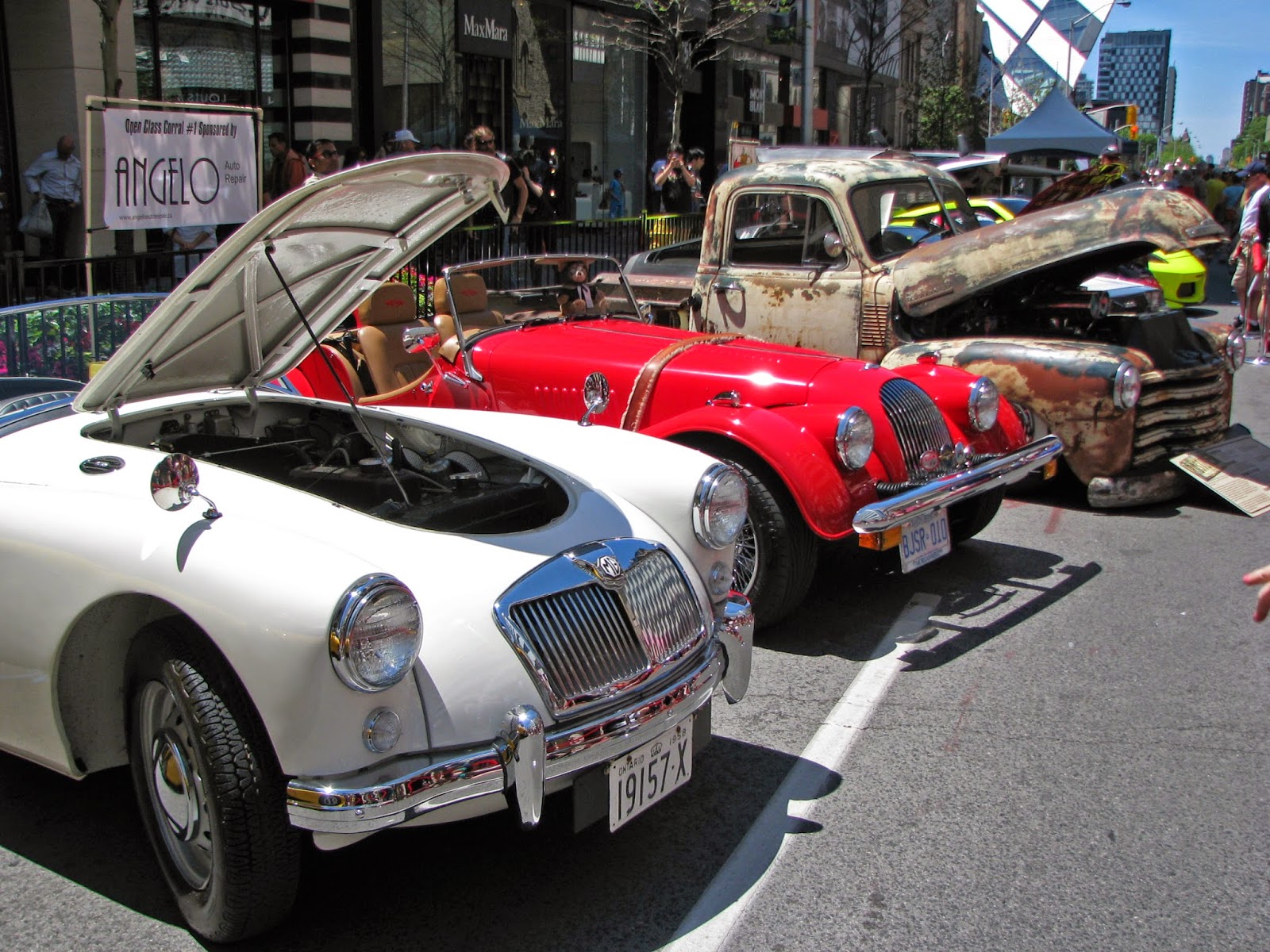 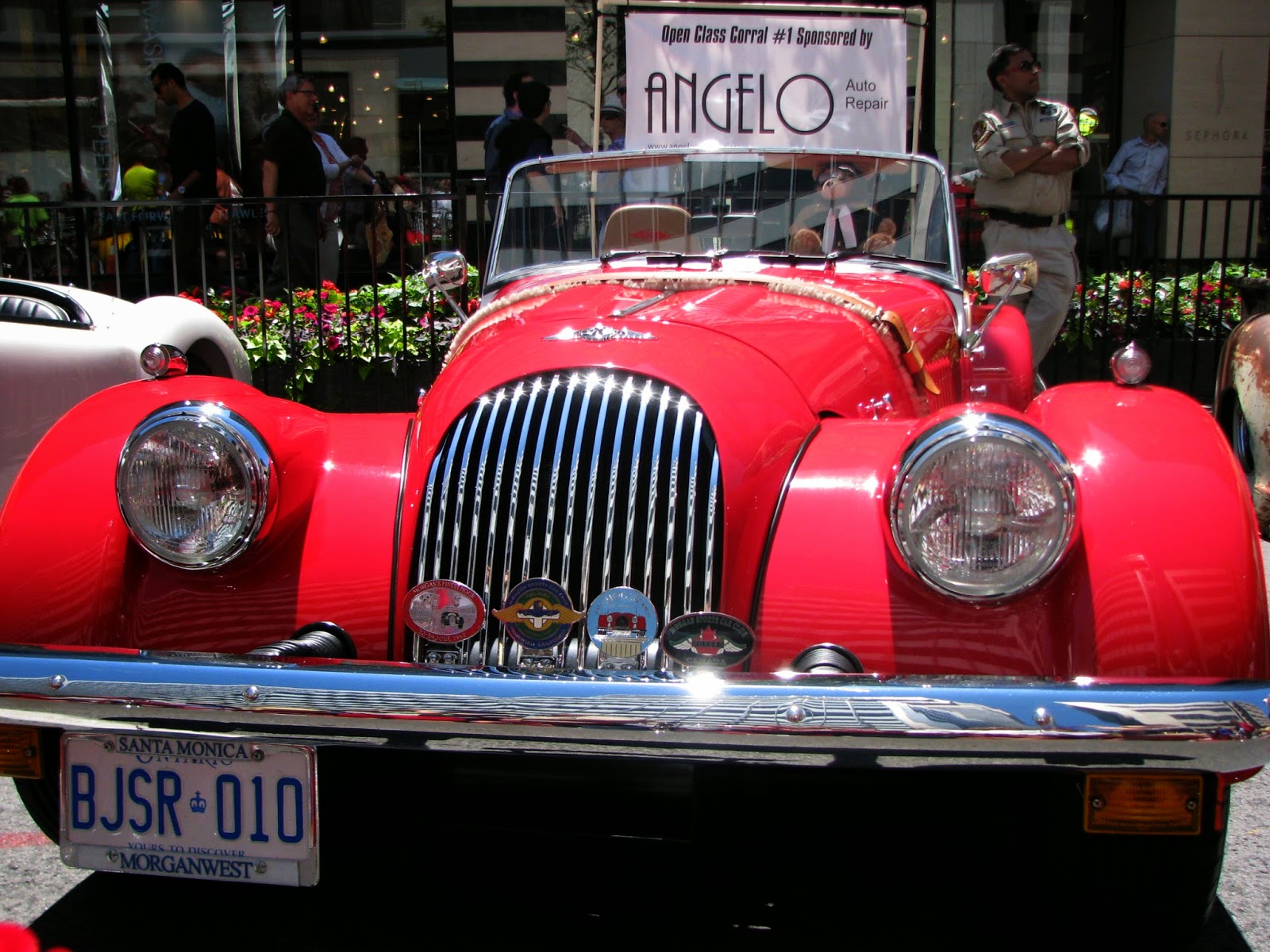 A closer look at the Morgan 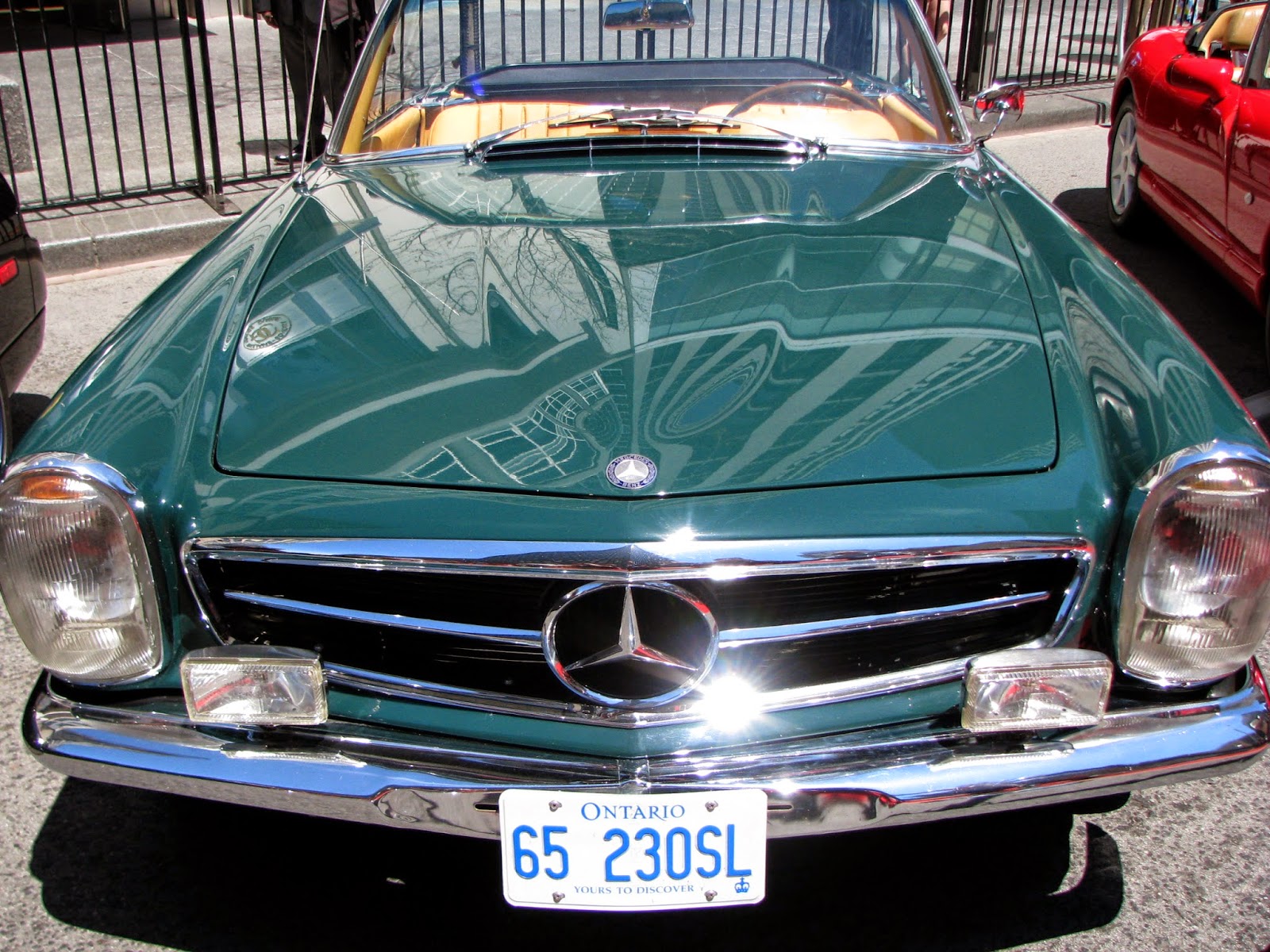 I was rather taken with this 1965 Mercedes, but I think it was because of the combination of the green exterior and gold leather interior 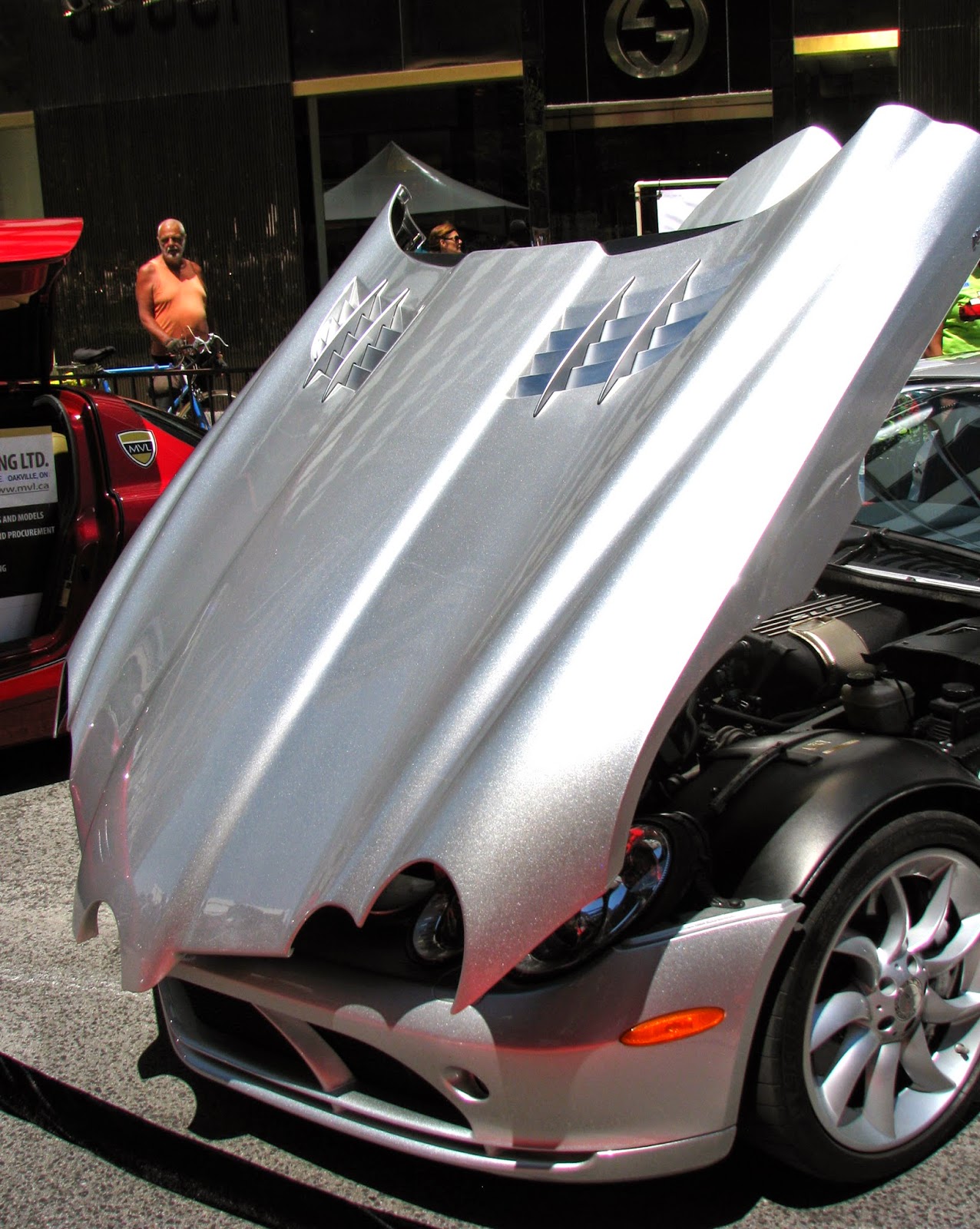 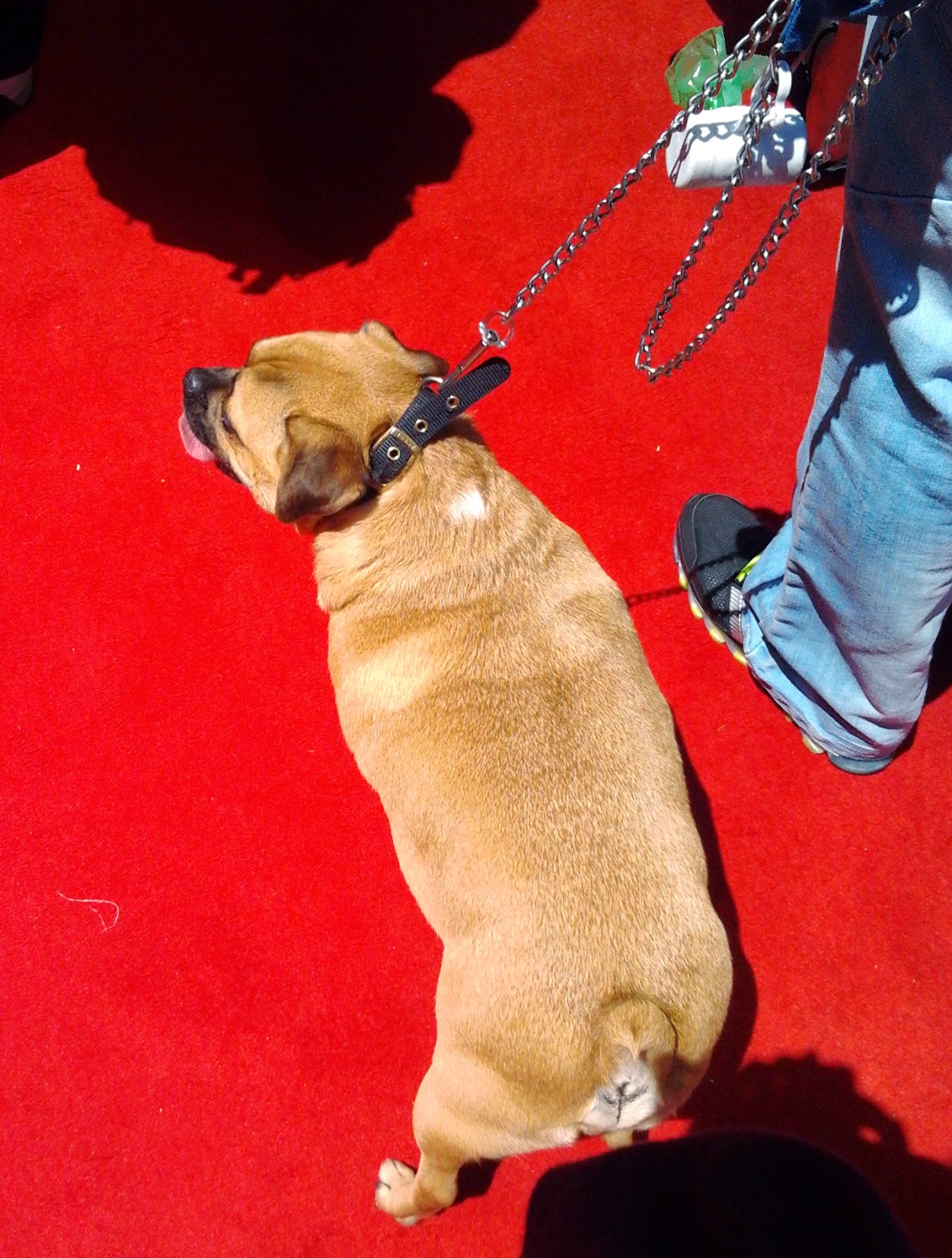 The street was packed with people squeezed together trying to get a look, and photos, of their favourite cars.  I felt sorry for the dogs that were there as I'm sure they were hot and bored. 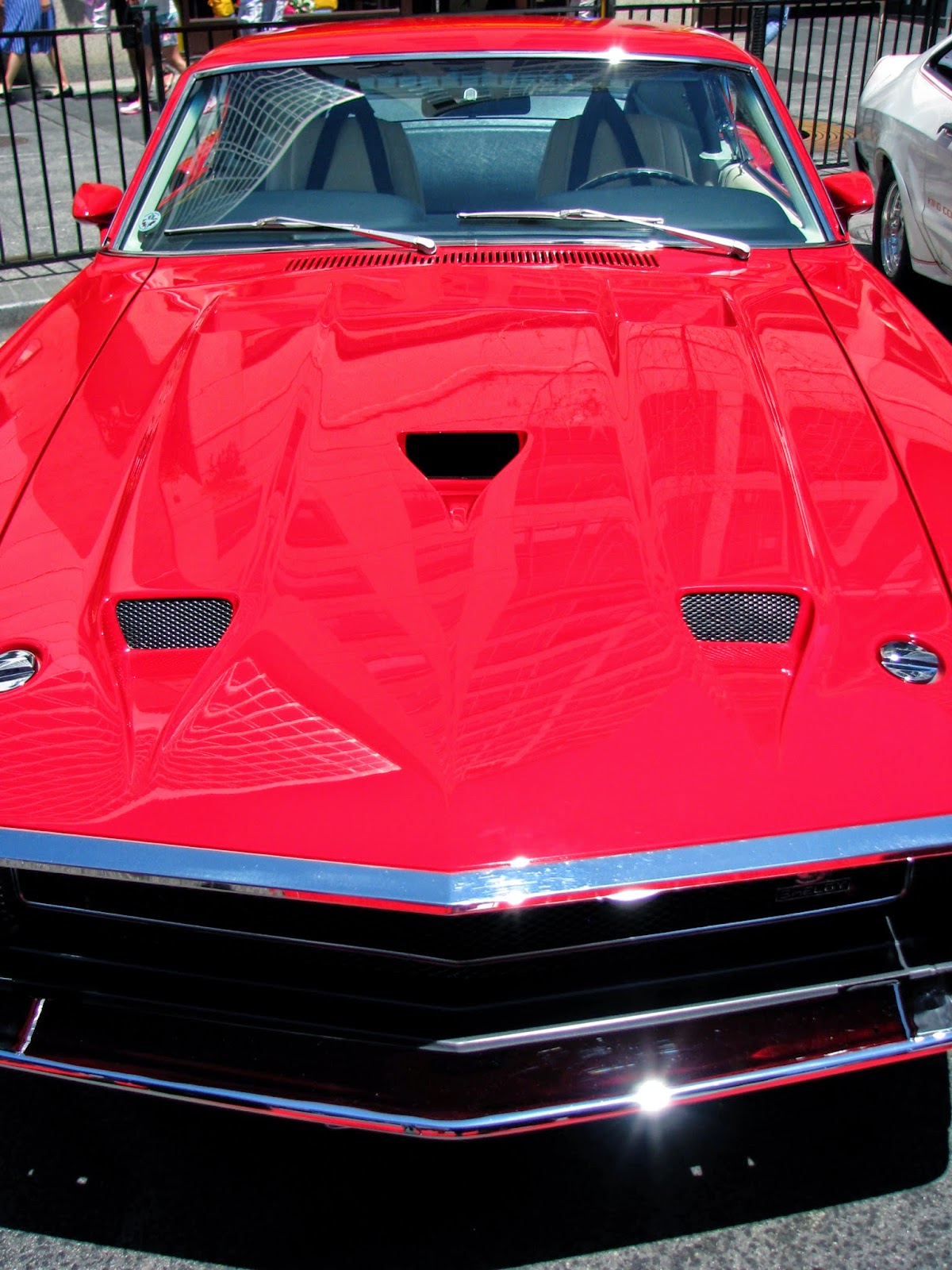 Red was definitely the colour of the day 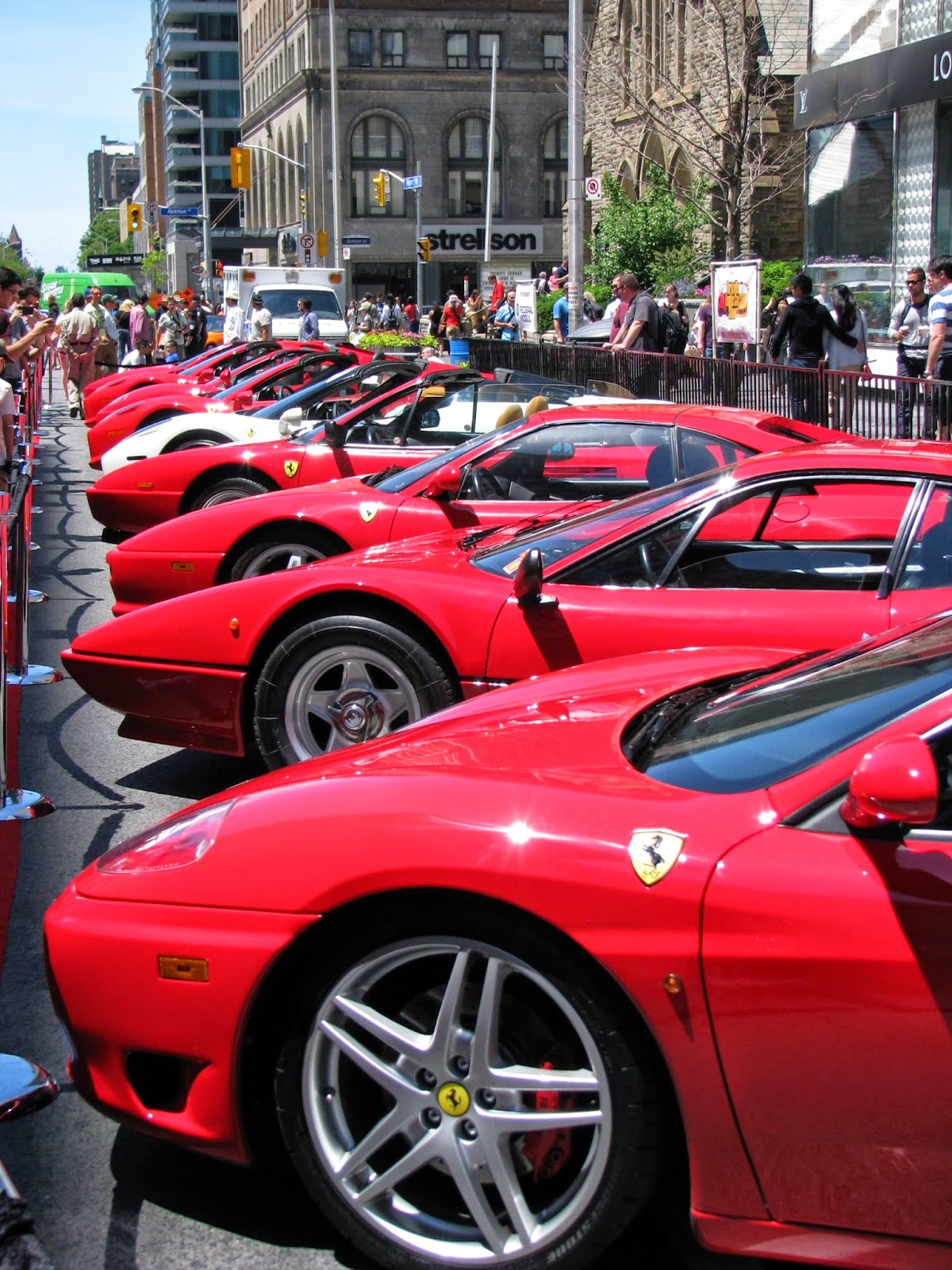 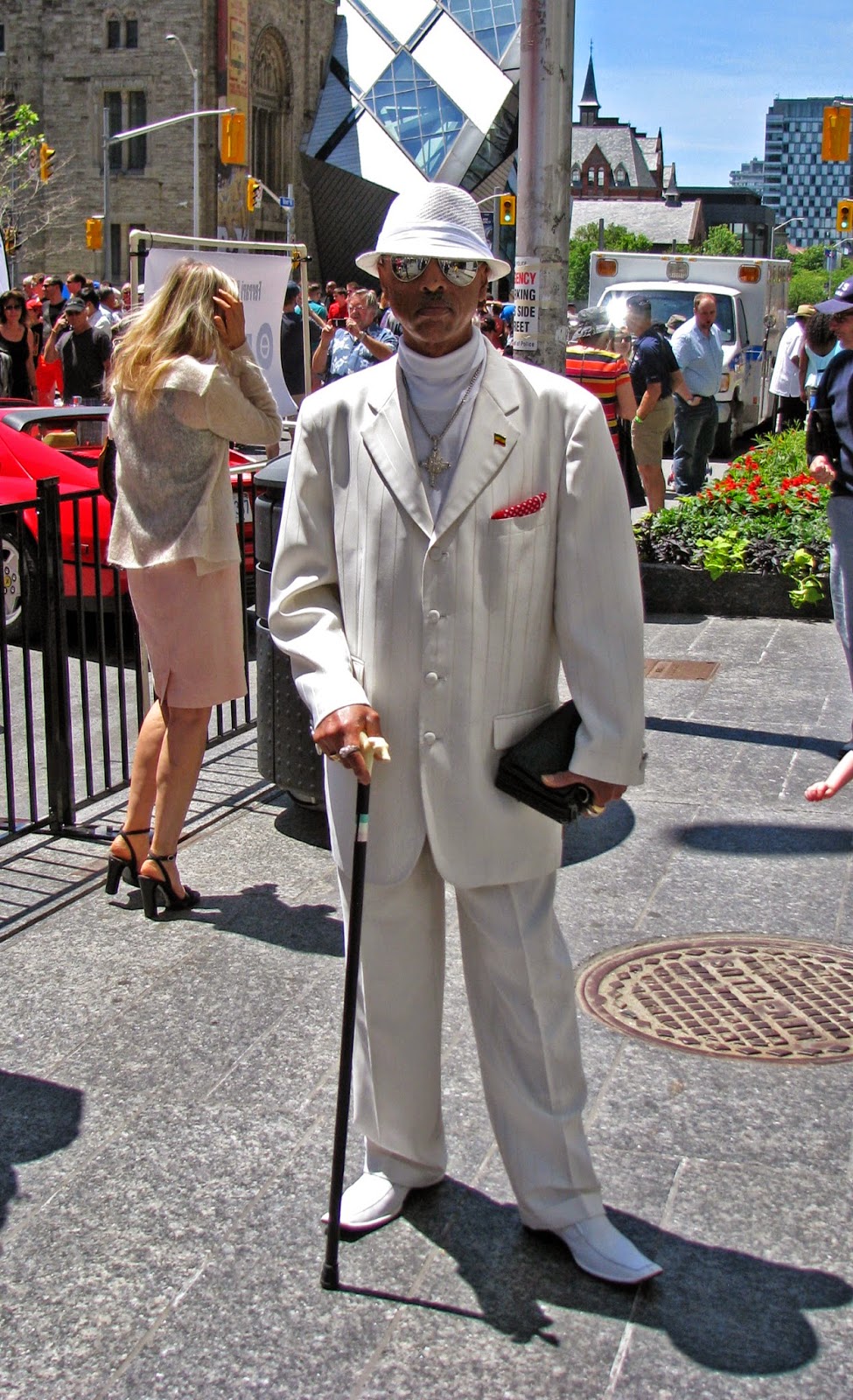 While the cars were the big draw for the majority of the people there, I was more excited by the opportunity to photograph this gentleman, whom I have seen strolling the streets of downtown Toronto before, but have never been able to get close enough for a photo.  I don't know what he wears in the winter, but anytime I've seen him during the summer he is dressed in head to toe white.

If you like fancy cars, you might want to put this show on your calendar for next June.  You can find more details on their website.
Posted by Forest City Fashionista at 7:49 PM