I am soooo far behind in everything, including blogging, that I can see my own arse.  I'm writing this post about what I did a week ago, as four days worth of dishes are soaking in the sink (I know, GROSS!). 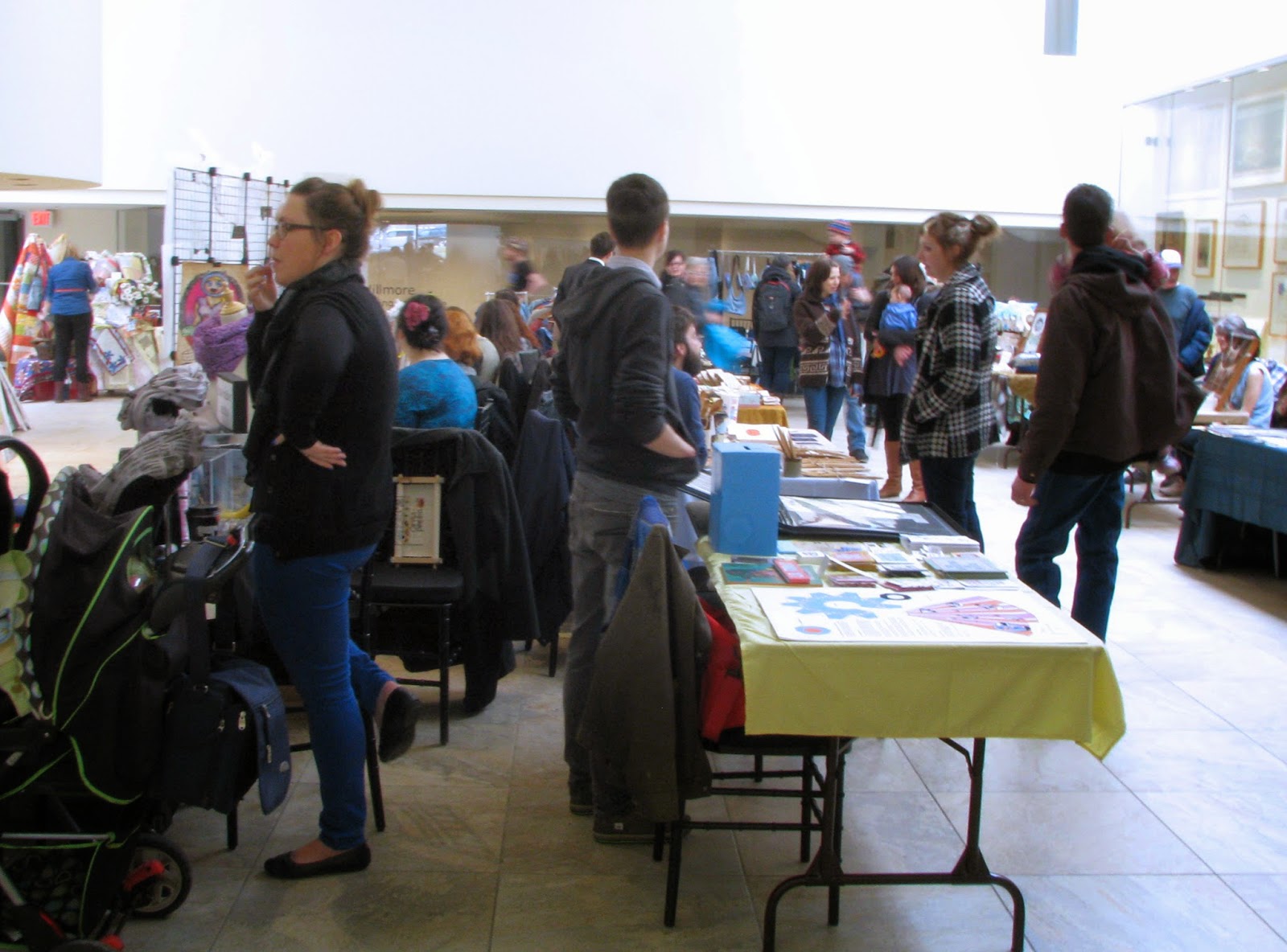 The Rag Bag Bazaar is a semi-regular event that brings together local artists, crafters and vendors in various downtown venues.  The most recent one, held at Museum London on April 5th, was the first one I had attended, so I have no idea how it compared to previous ones. 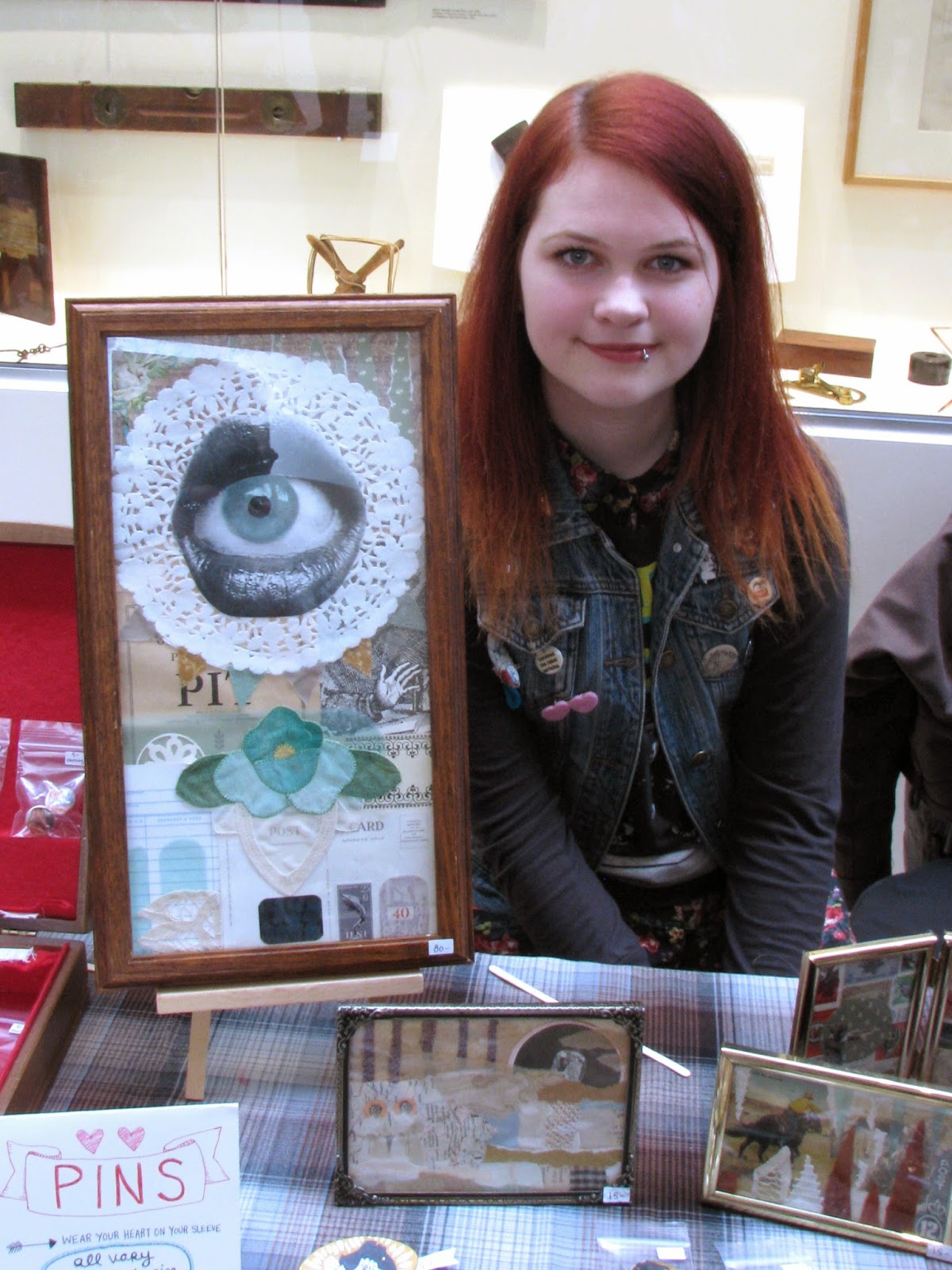 I was surprised and delighted to meet artist Sarah Feehan, who had some of her collages and pins for sale.  I had purchased a small sculpture of hers at the Visual Arts students' end-of-year sale at Western, and it's always a treat to meet the creator of something you fell in love with.  In this case it was..... 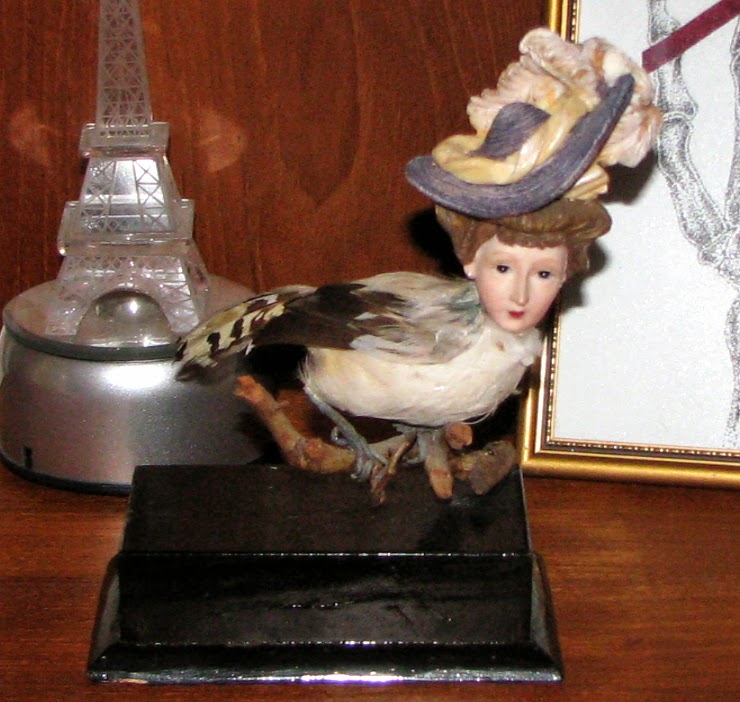 ....this sculpture, which incorporates a taxidermied bird body.  The moment I saw her (I named her Edwina) I knew I had to have her.  She was on my filing cabinet at work for a few days until I could get her home, inspiring a variety of comments;  now she lives on a shelf in my living room, along with the skeleton hand drawing I purchased from the same sale last year, the Eiffel tower, and some chalkware kitties. 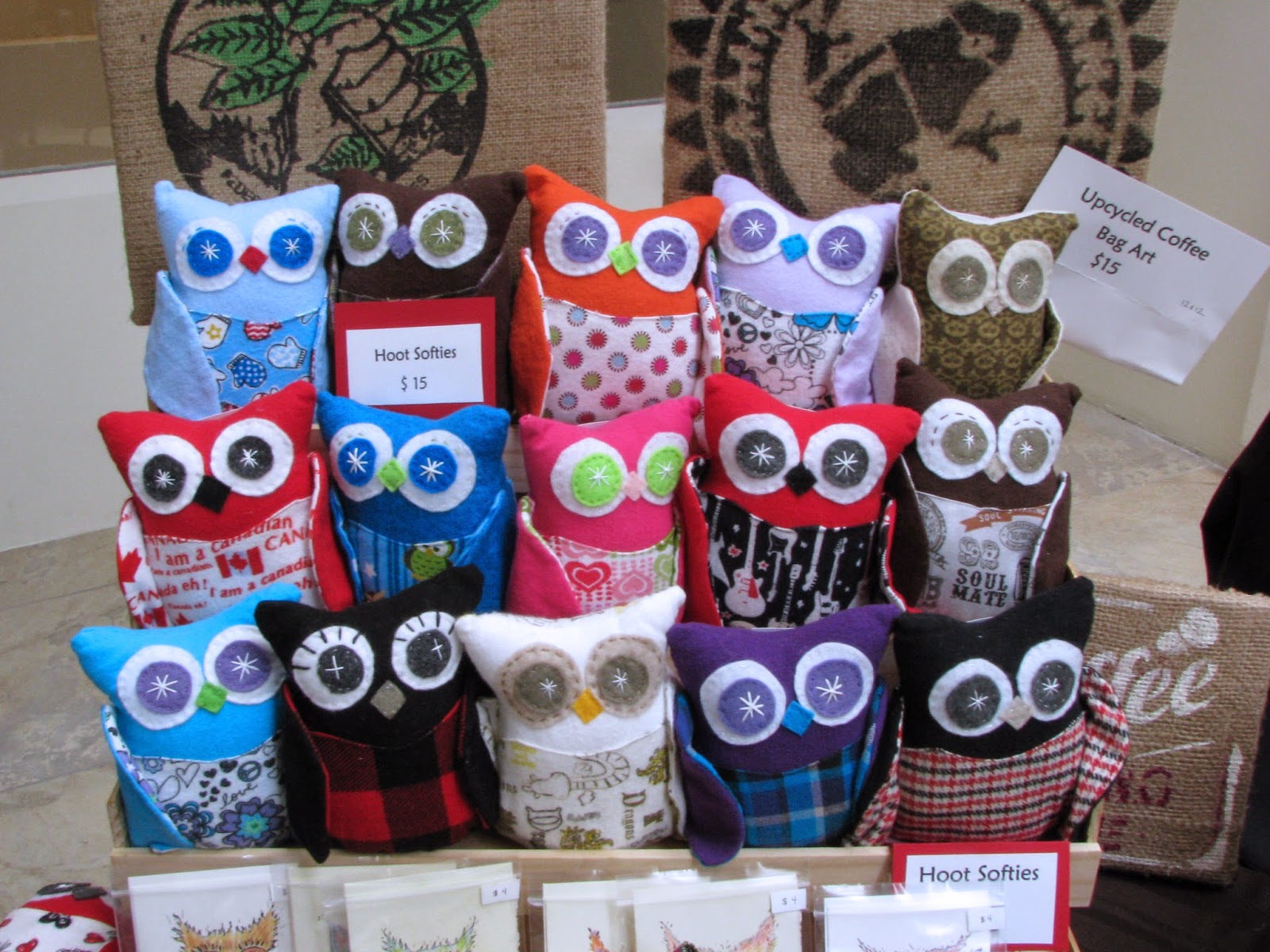 The "Give A Hoot" table had these adorable stuffed owls for sale, along with other owl-themed items.  I purchased a small red stuffed owl barrette which I promptly stuck in my hair. 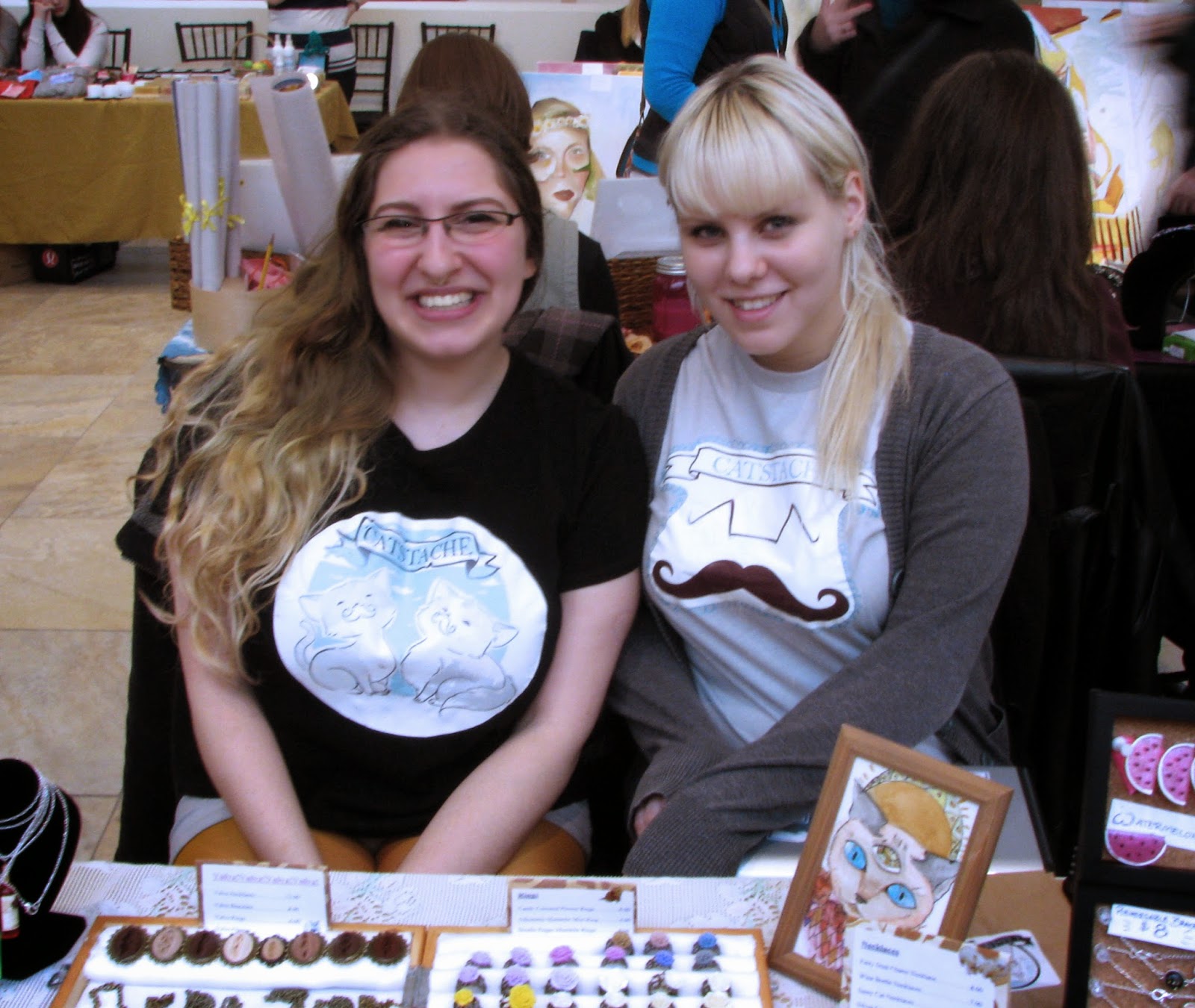 These charming women selling cute jewellery under the name Catstache had an item that was pretty much guaranteed to be a conversation piece no matter where you wore it... 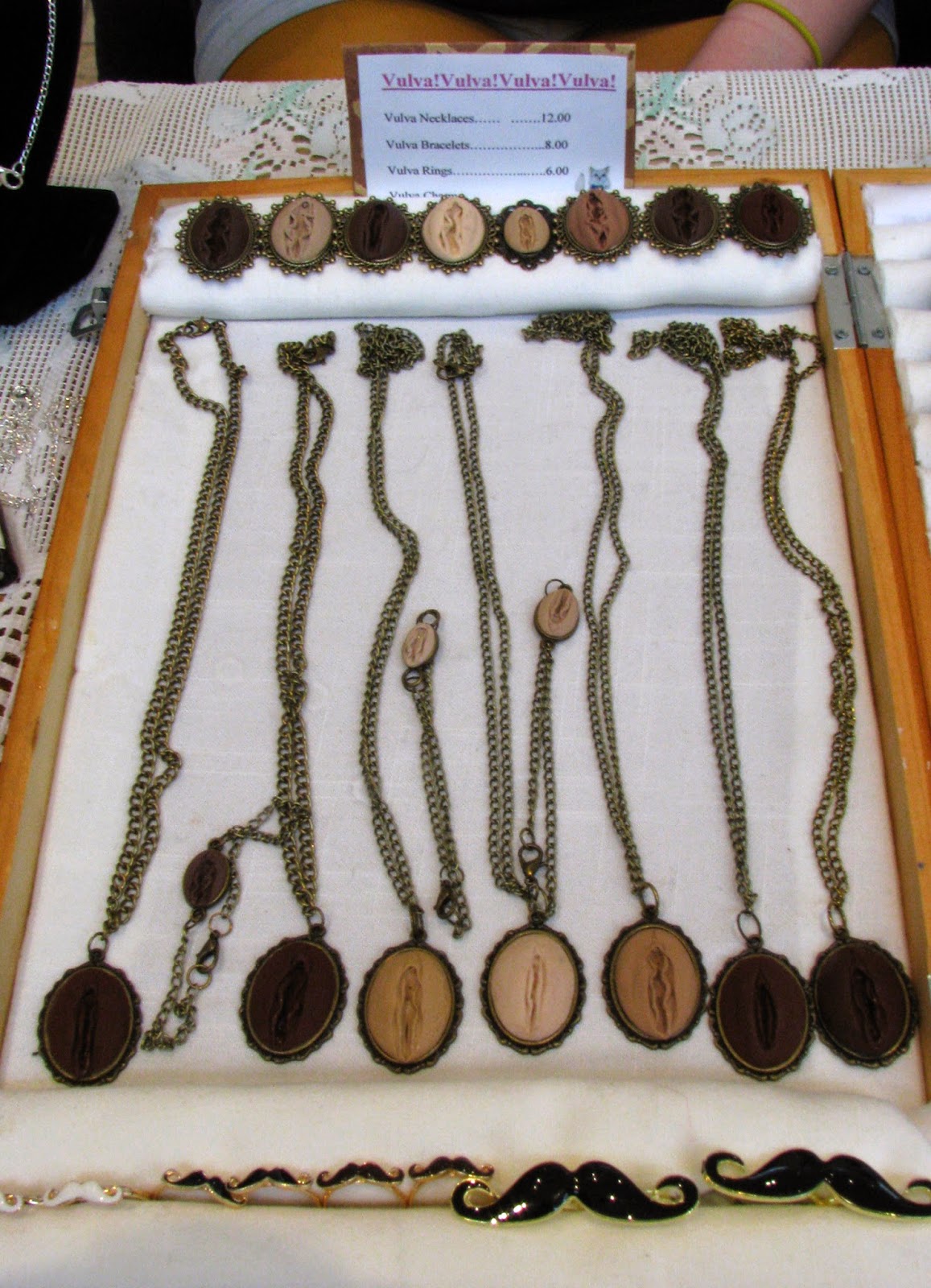 Yep, that would be Vulva jewellery.  Wear your vulva proudly, on your finger, around your neck, or your wrist. 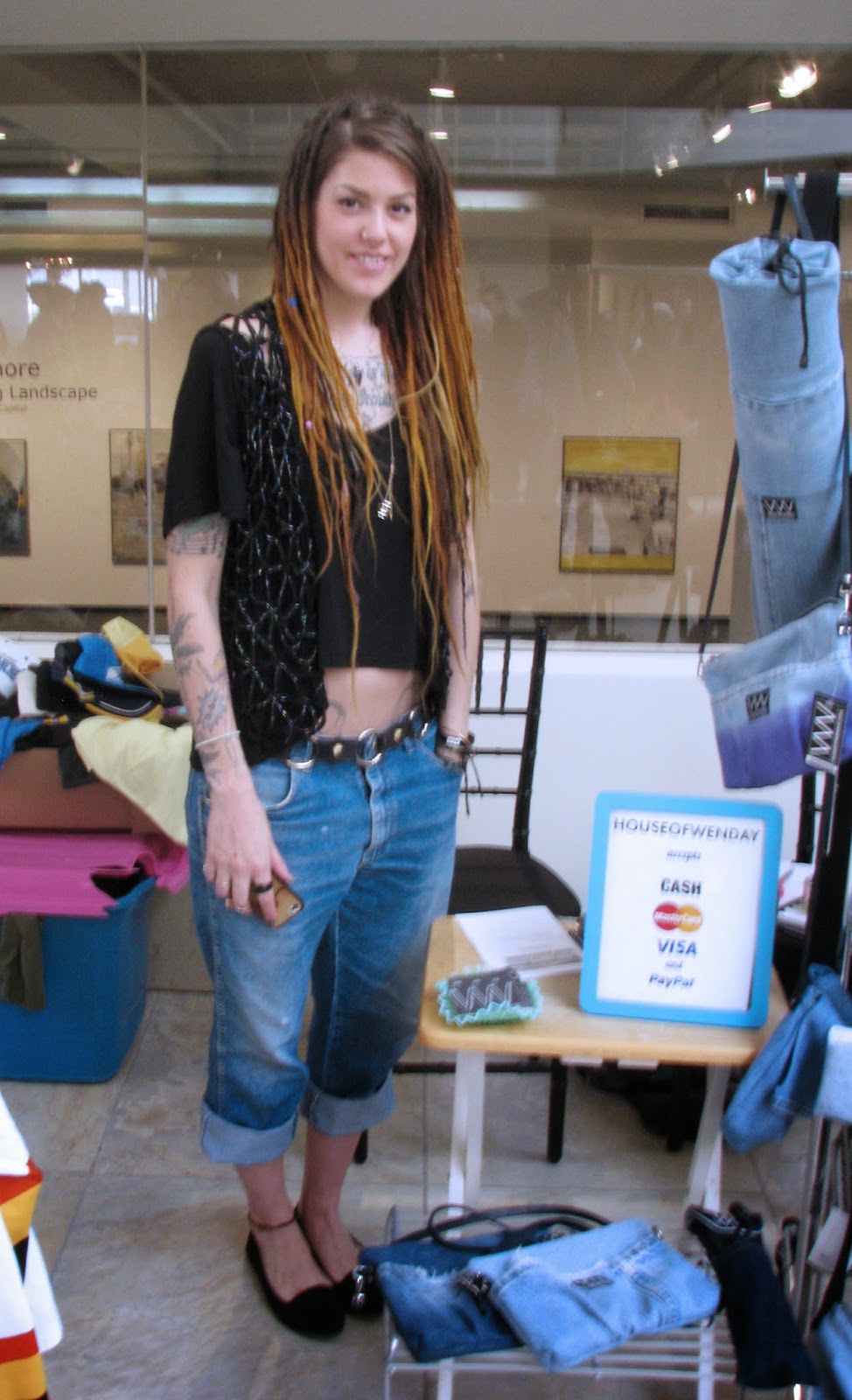 Wendy Van Der Meer sells her own designs under the name House of Wenday that include accessories made from recycled denim, t-shirts, dresses, and scarves. 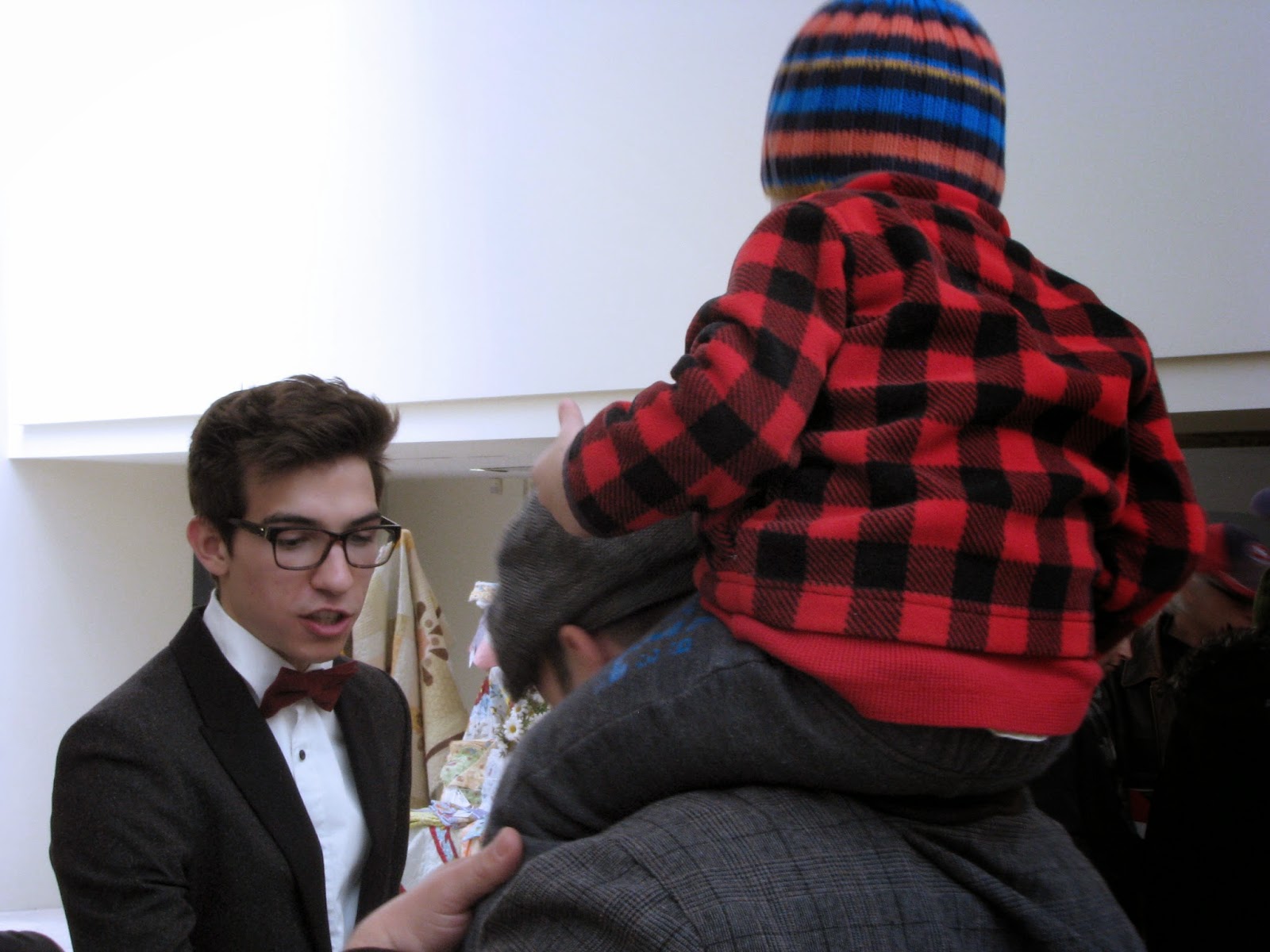 The young man in the glasses and bow tie was selling bow ties (I assume of his own design).  The father of the little boy in the lumberjack plaid jacket was interested but the little guy, obviously more into the outdoorsy casual look, not so much. 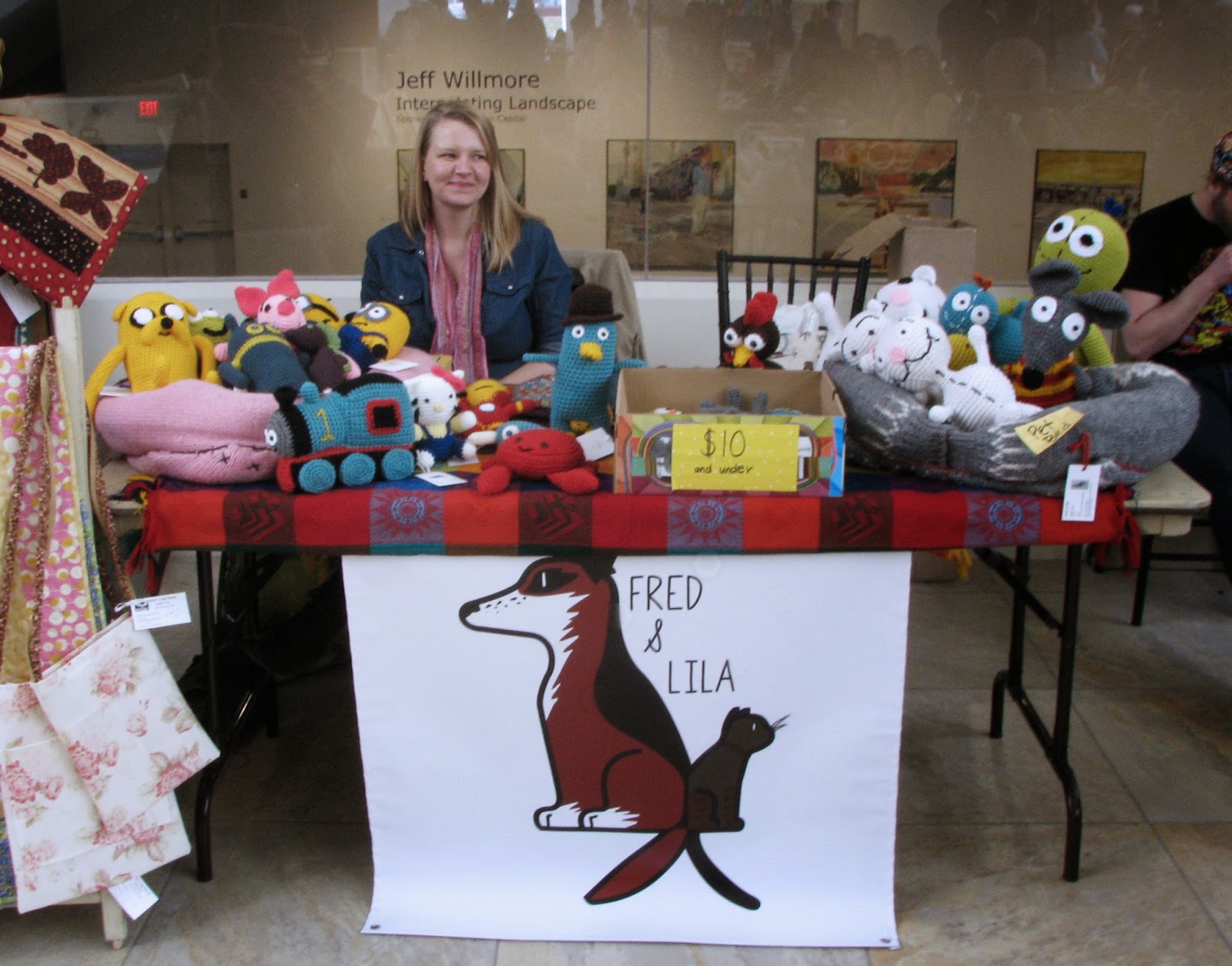 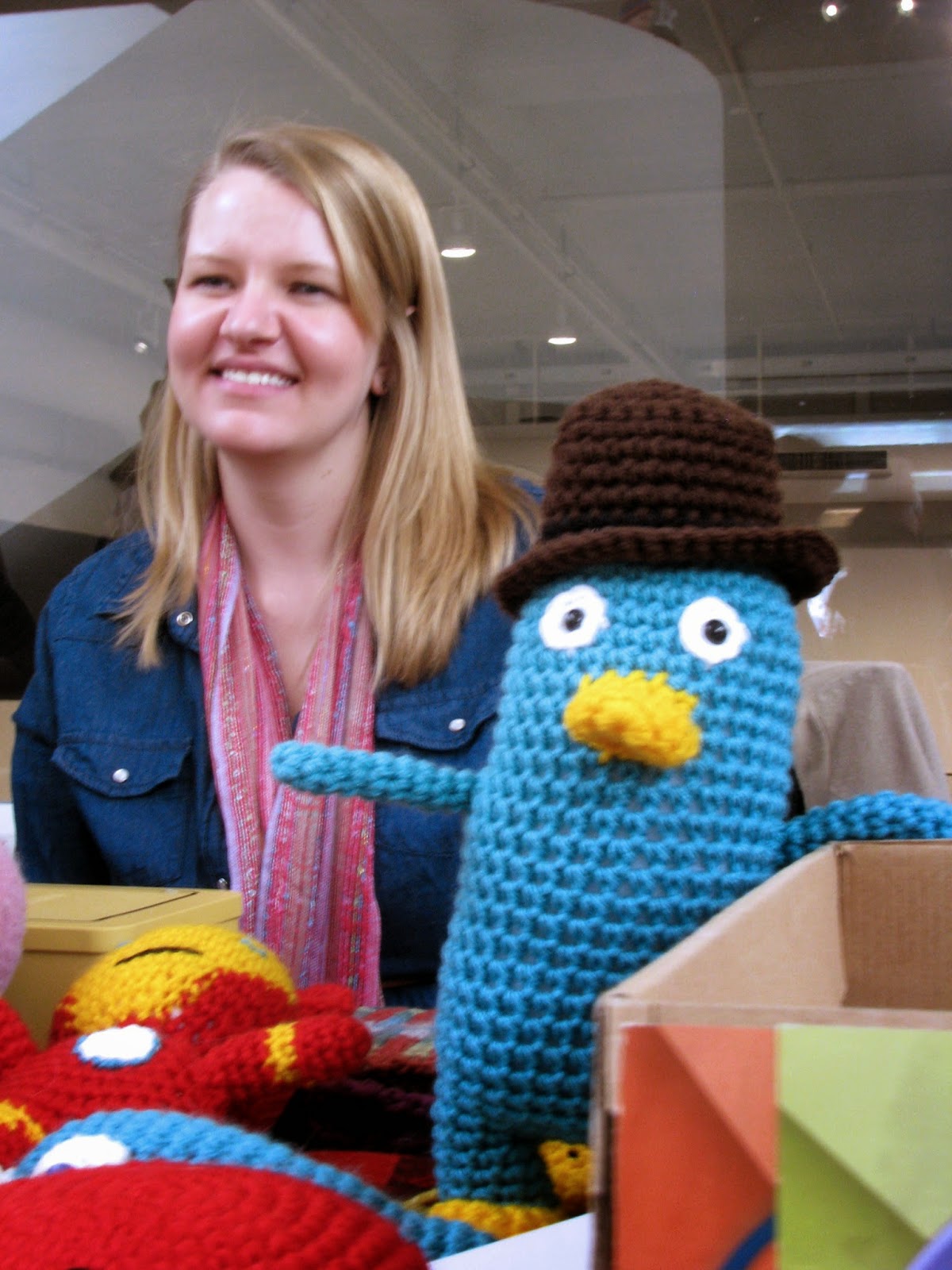 The blue guy in the foreground is Perry the Platypus.  If I had children, I may have known he is a character from a television show who is a secret spy, as it is, I just thought he was cute. 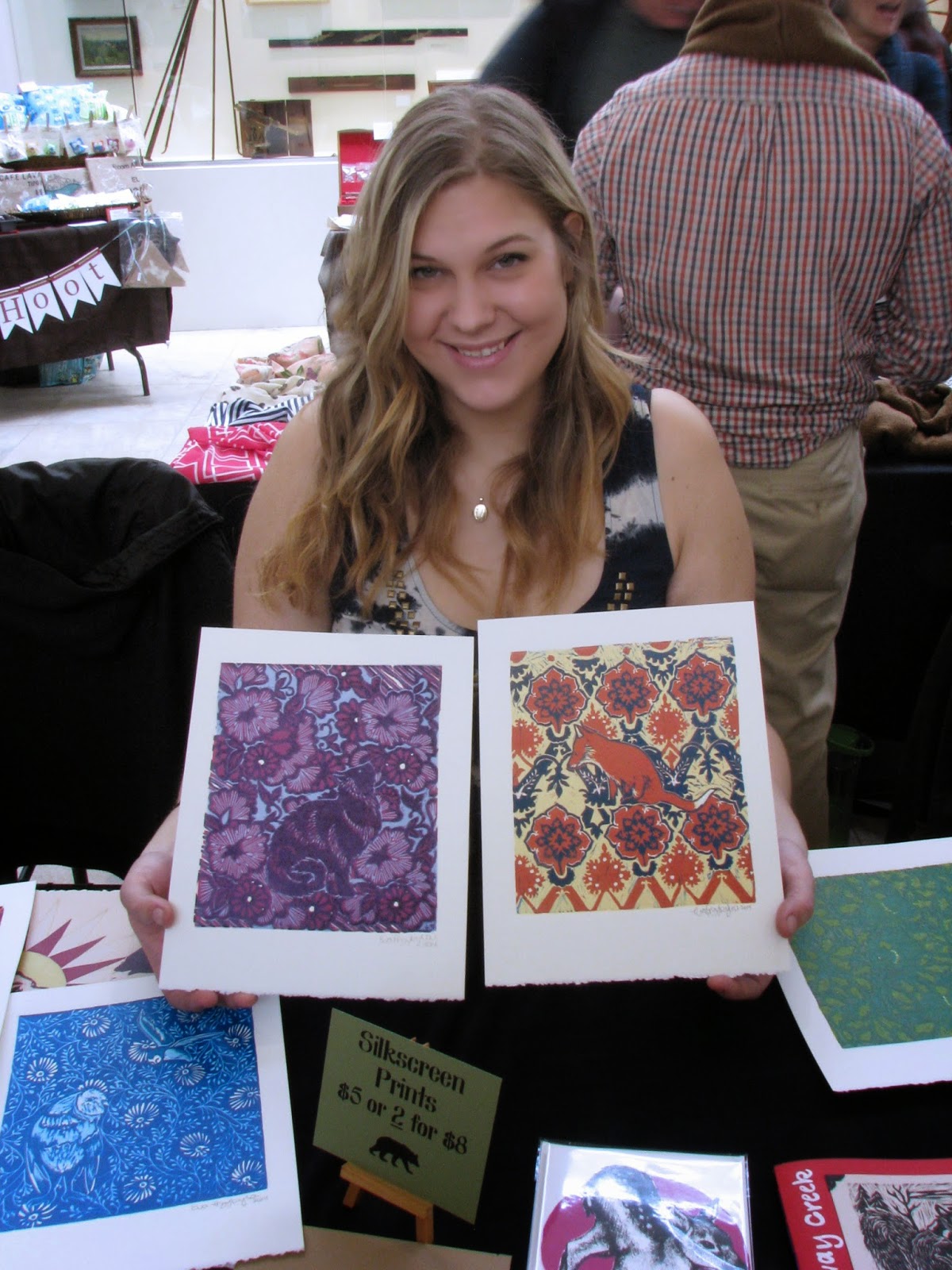 Eva Przybyla had some beautiful silkscreen prints for sale - I asked her to hold two of my favourites in the photo. 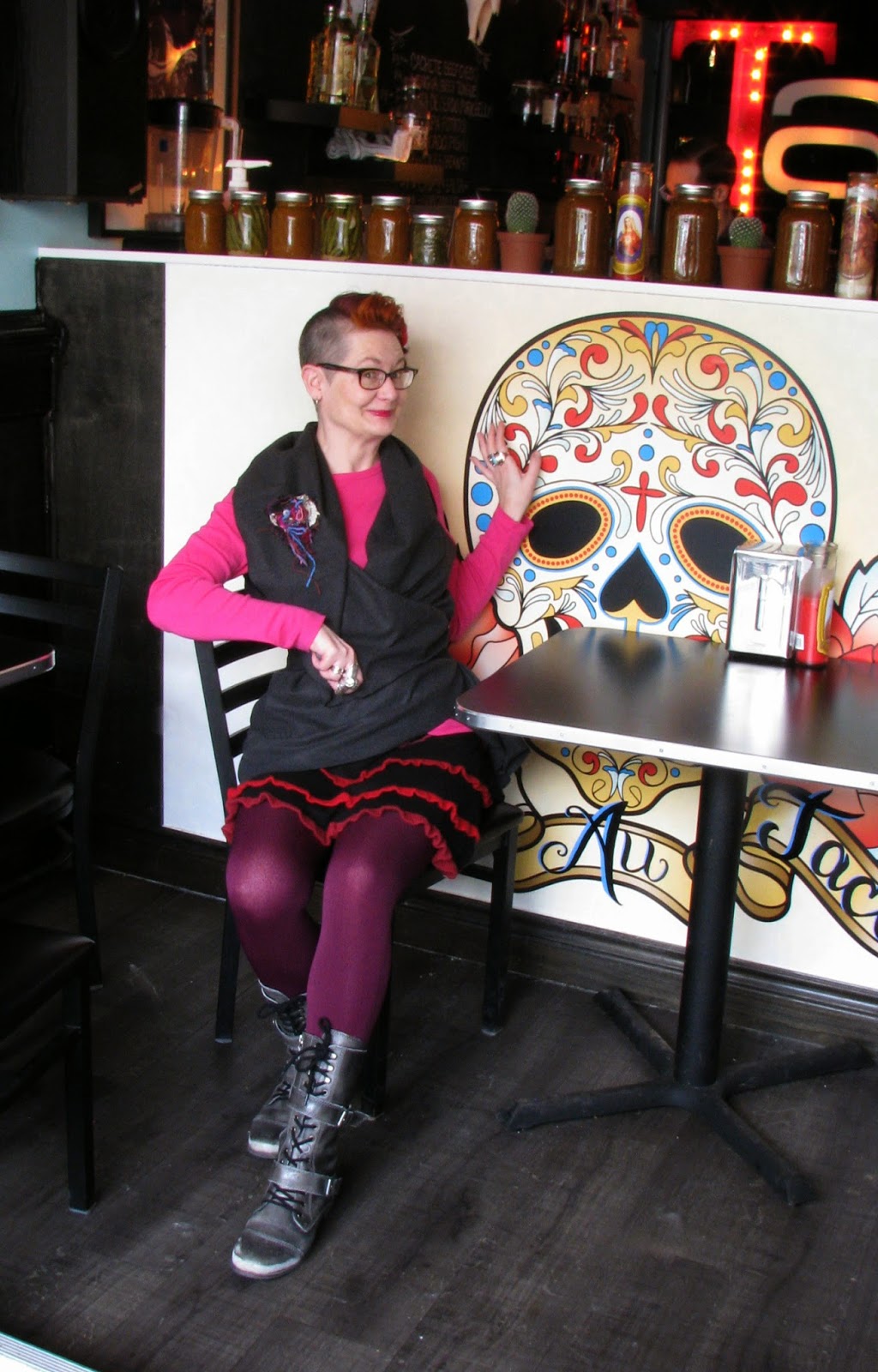 After we had visited all the vendors' tables, Heather and I walked over to Rock Au Taco to grab a bite before parting ways. 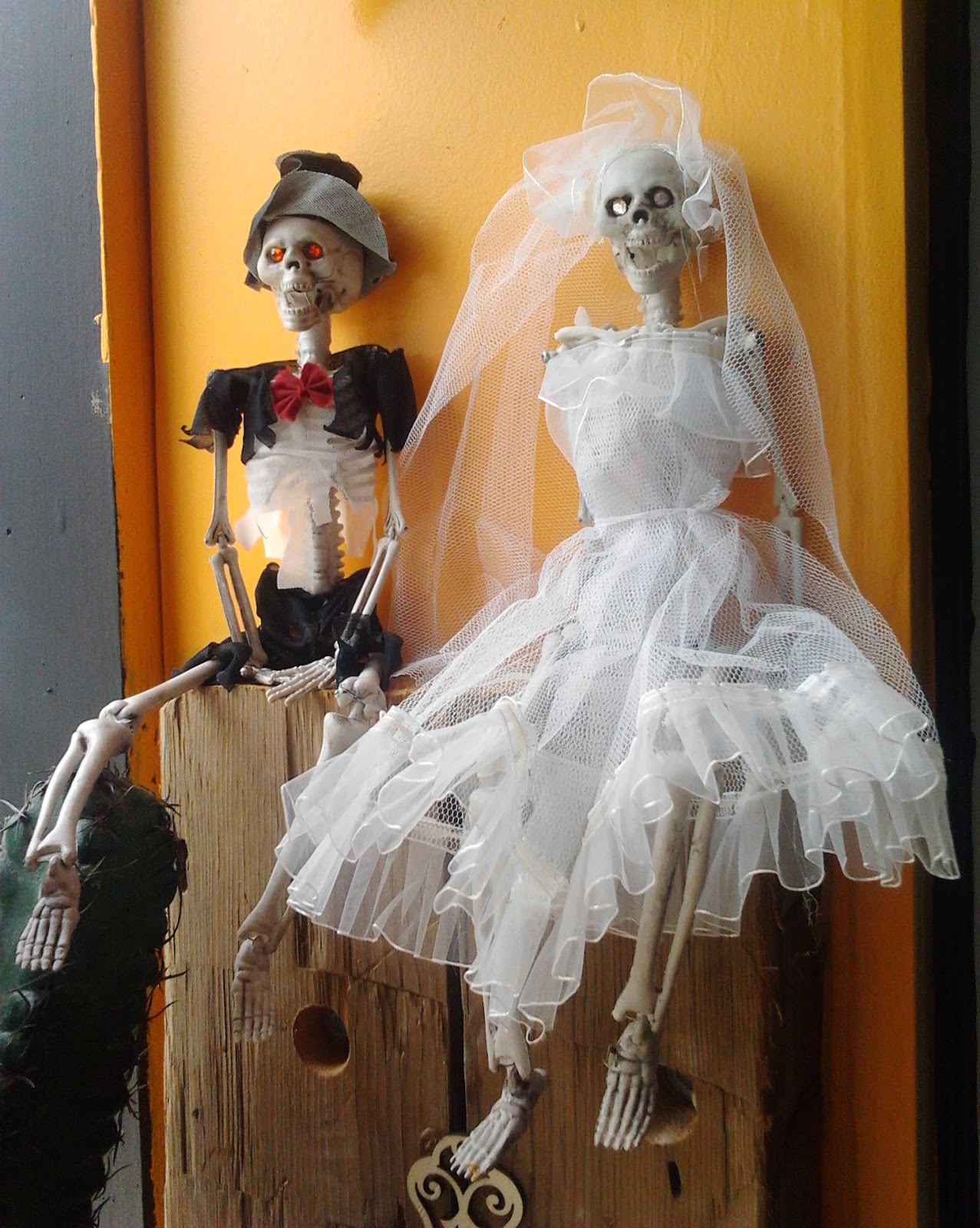 We sat in the window next to this couple.  The decor is very colourful and quirky, and the tacos are yummy, as I mentioned in a previous post.

....and that was last Saturday.  Stay tuned as I post about some cool things that happened this week, including receiving unexpected blogger love by mail, and learning about the science of store design.
Posted by Forest City Fashionista at 4:19 PM