Le Chateau - All Grown Up

One of the last places I want to spend a Saturday afternoon is in a crowded shopping mall, but this past weekend I made an exception when I was invited to attend the grand opening of Le Chateau's newly renovated store at White Oaks Mall here in London.   Had it been a different company that made the invitation, I would have probably declined it,  but I have a nostalgic fondness for the Montreal-based company, which I discovered when I first moved to London in 1980.  At that time, the Canadian retailer was selling fun and inexpensive clothing and accessories, and I would stop by the store in downtown London at least once a week.  It was the store where the "cool" people worked, and by shopping there, one hoped that some of the coolness rubbed off on you.  After the 80's passed, and I acquired a series of office jobs that required me to dress more conservatively, I lost interest in clothes that fell apart after one washing. I probably hadn't been in a Le Chateau store for several years.

When I received the invitation to the opening, I looked at the store website and discovered that their image had changed significantly.  No longer the go-to place for cheap club clothes (H & M and Forever 21 have that market cornered), the Le Chateau of 2014 is a boutique-style store selling medium-priced, stylish clothing targeted to women in their 30's and up.  As Shawn Schmidt, Director of Visual Presentation, explained, the store has grown up along with their customers. 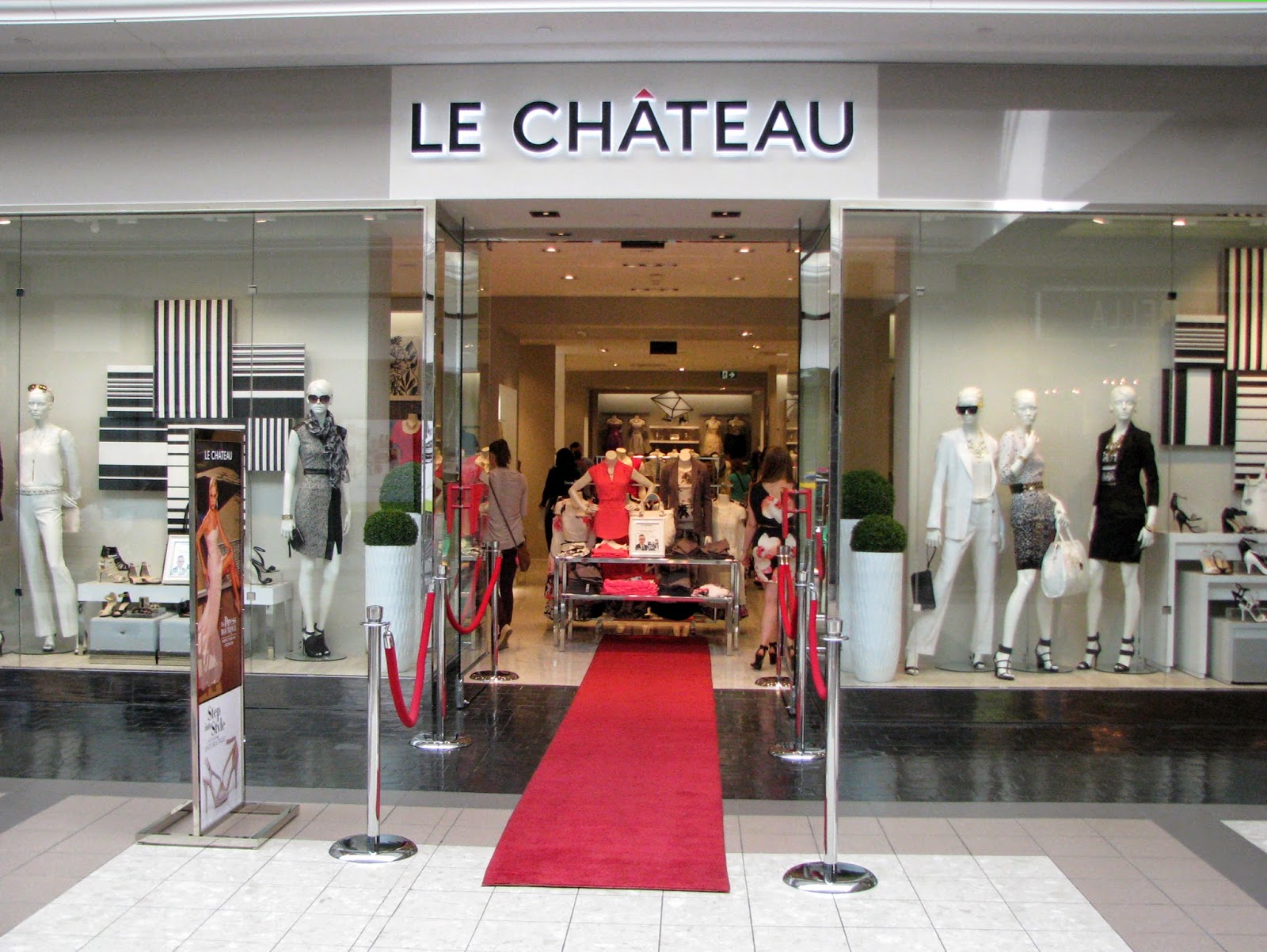 For the grand opening, the company rolled out the red carpet and handed out gift bags and treats to customers. 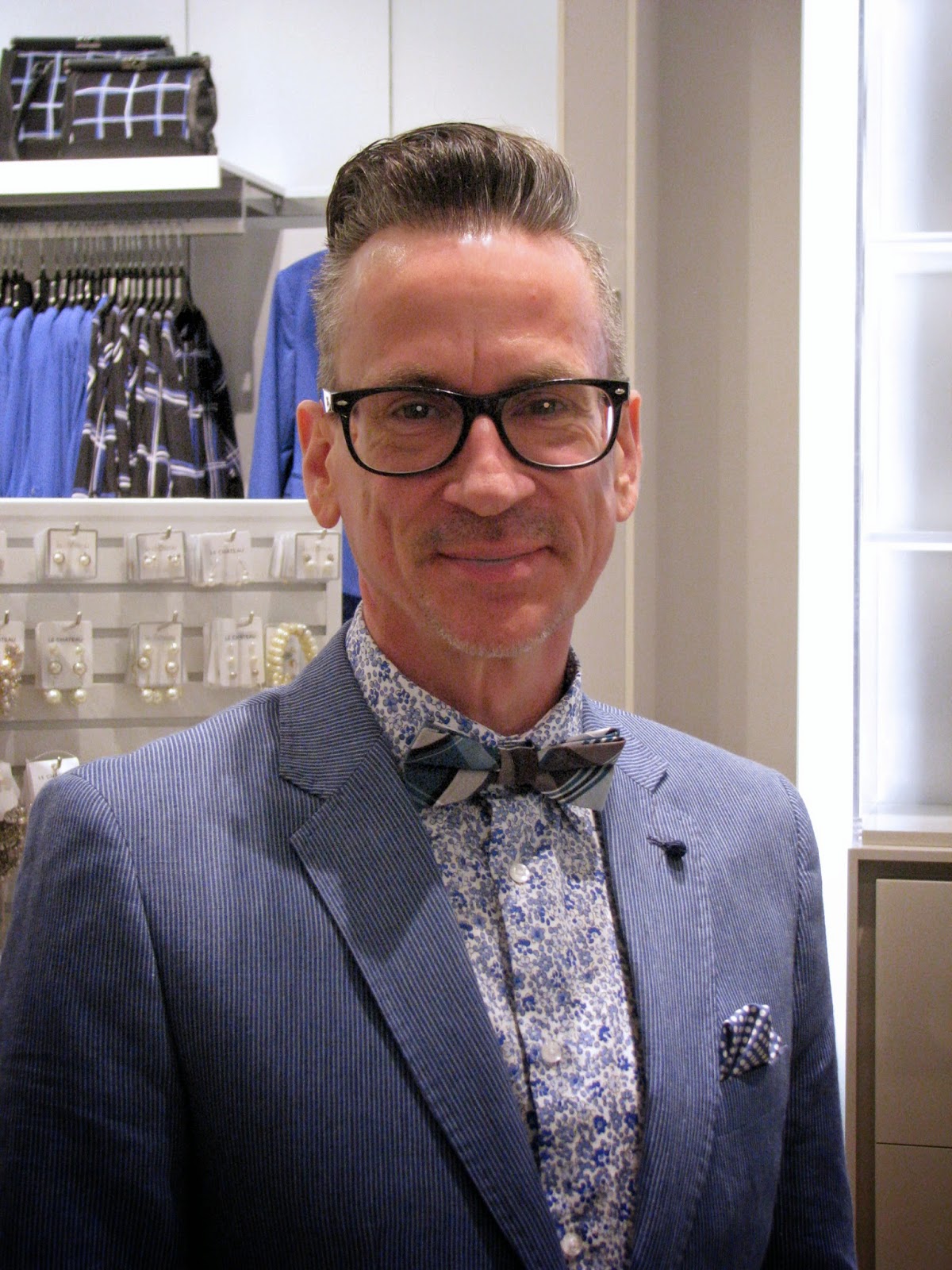 Shawn Schmidt, the host for the event, was as charming as he was impeccably dressed.

I spent quite a bit of time chatting about the evolution of the company with Mr. Schmidt, who has been with Le Chateau for over 20 years.  40% of the merchandise sold by Le Chateau, including dresses and suits, is manufactured in Canada, which allows them to maintain better quality control.  Sizes range from 0 - 15/16, although not in every item, and according to Schmidt, they are "real sizes", not model versions.  I noted that the majority of the store staff were under 30, and asked if a 50-something woman could get a job here, and he assured me they would be happy to hire older sales staff. 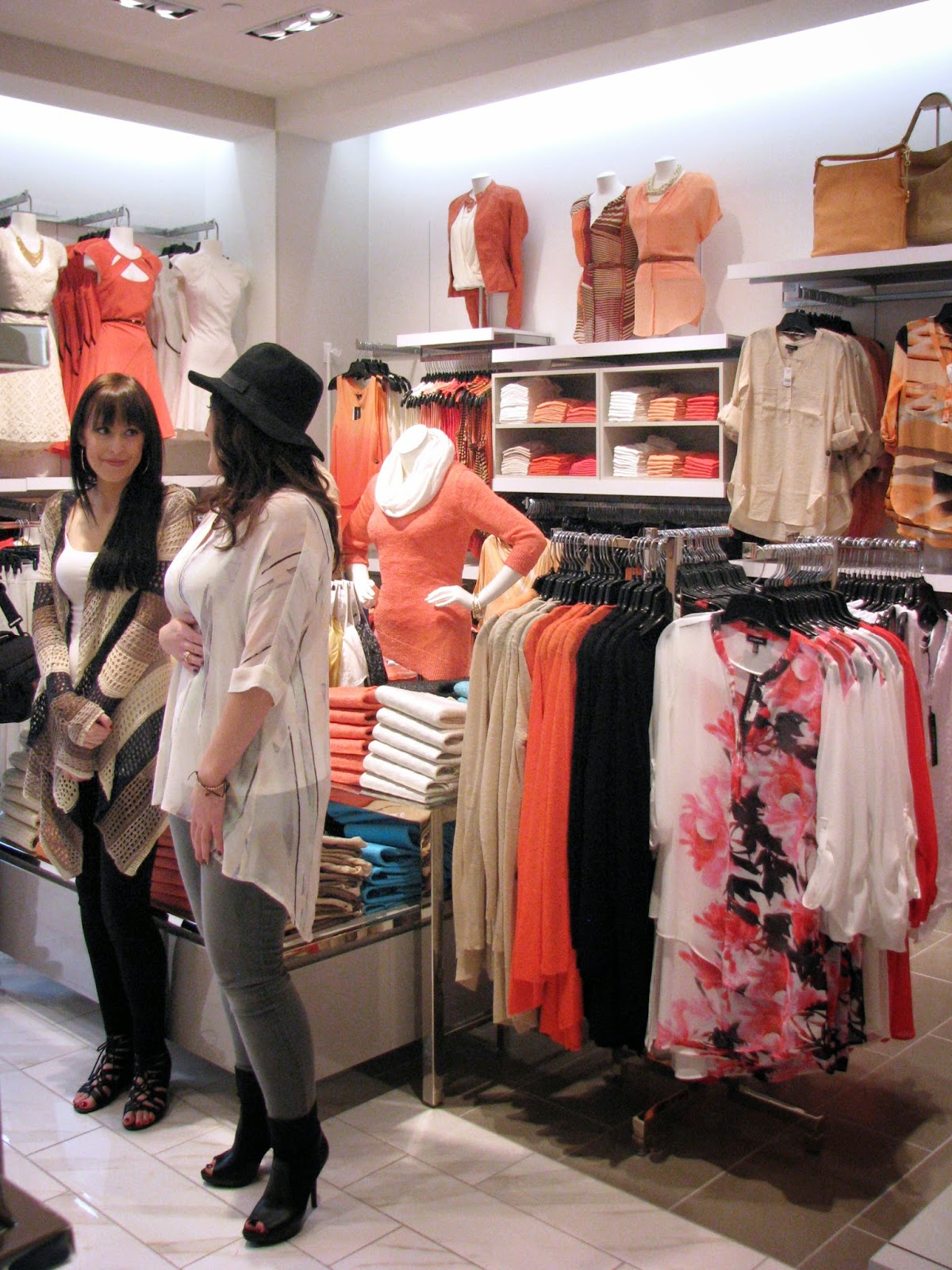 The store has moved from their old location in the mall near the food court to a new, redesigned space.  Each collection has its own area to give the feeling of a series of European style boutiques instead of just one large, intimidating space. 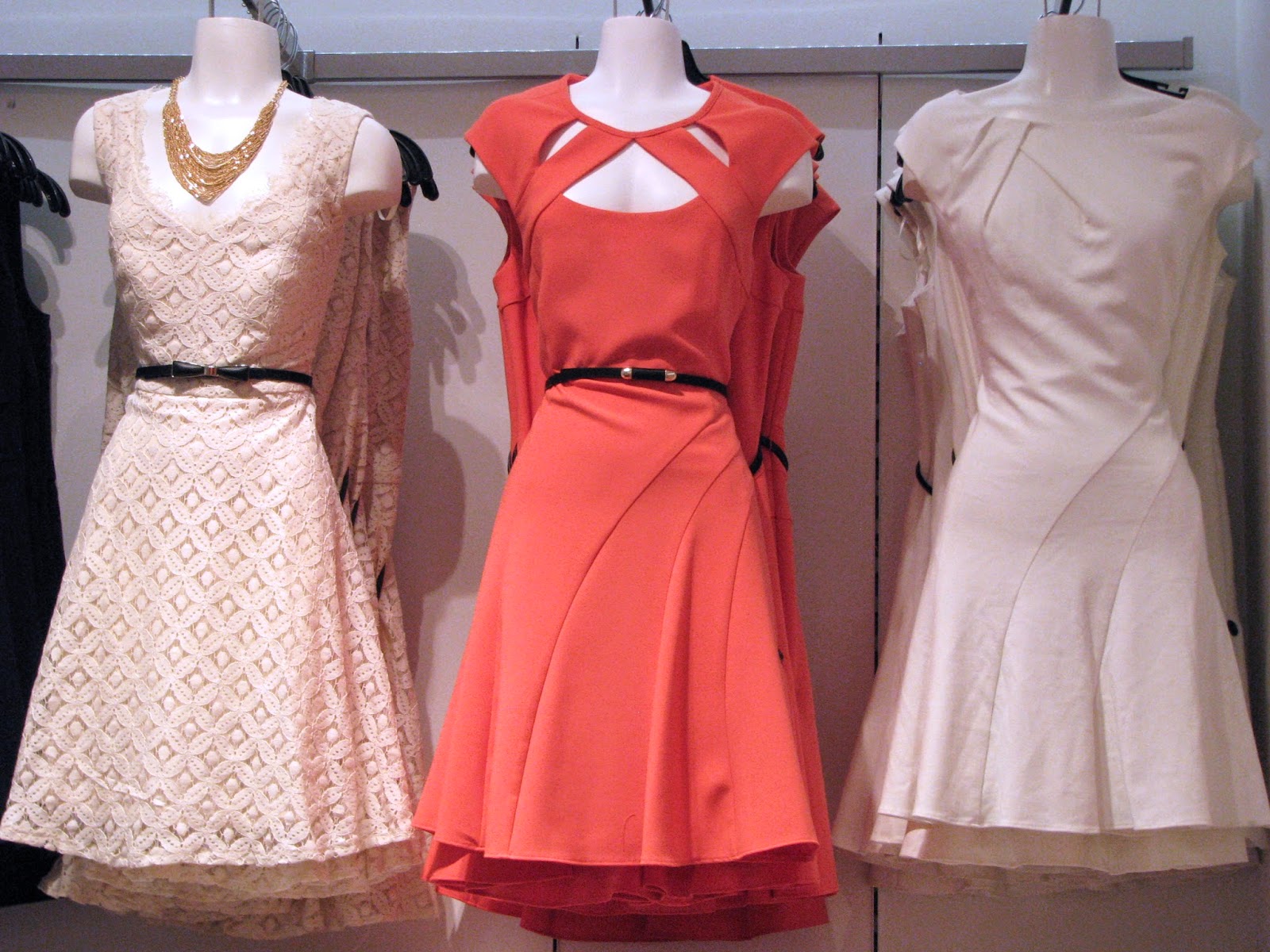 Three dresses from the collection seen in the previous photo

The store had a large selection of very pretty, figure-flattering dresses and if I had a job that required me to dress more conservatively, I'm sure I could have found something here that would be appropriate, but not boring.  There were lots of bright colours everywhere. 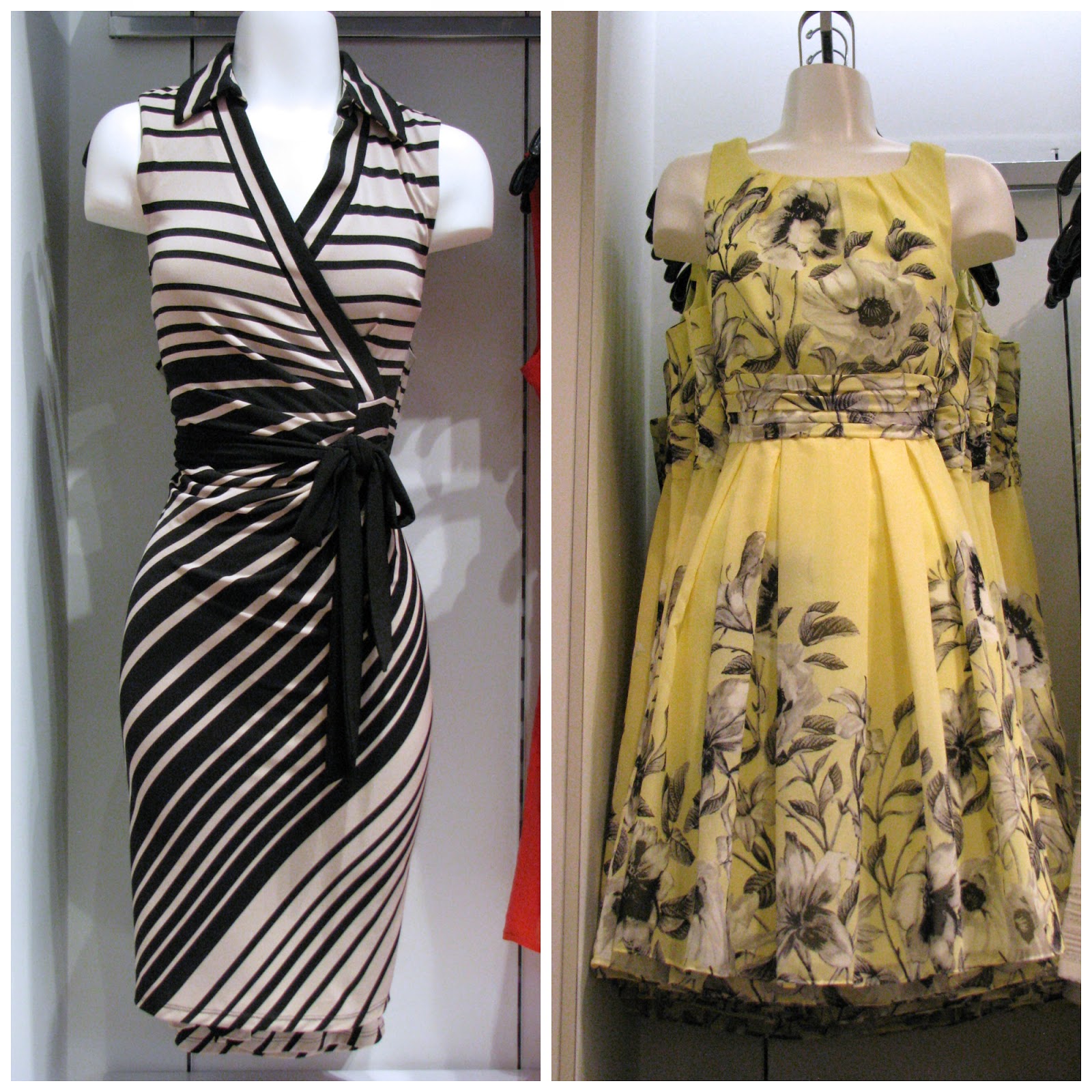 I thought the two dresses above, although very different in design, were both extremely flattering and very stylish, and would look good on a variety of women. 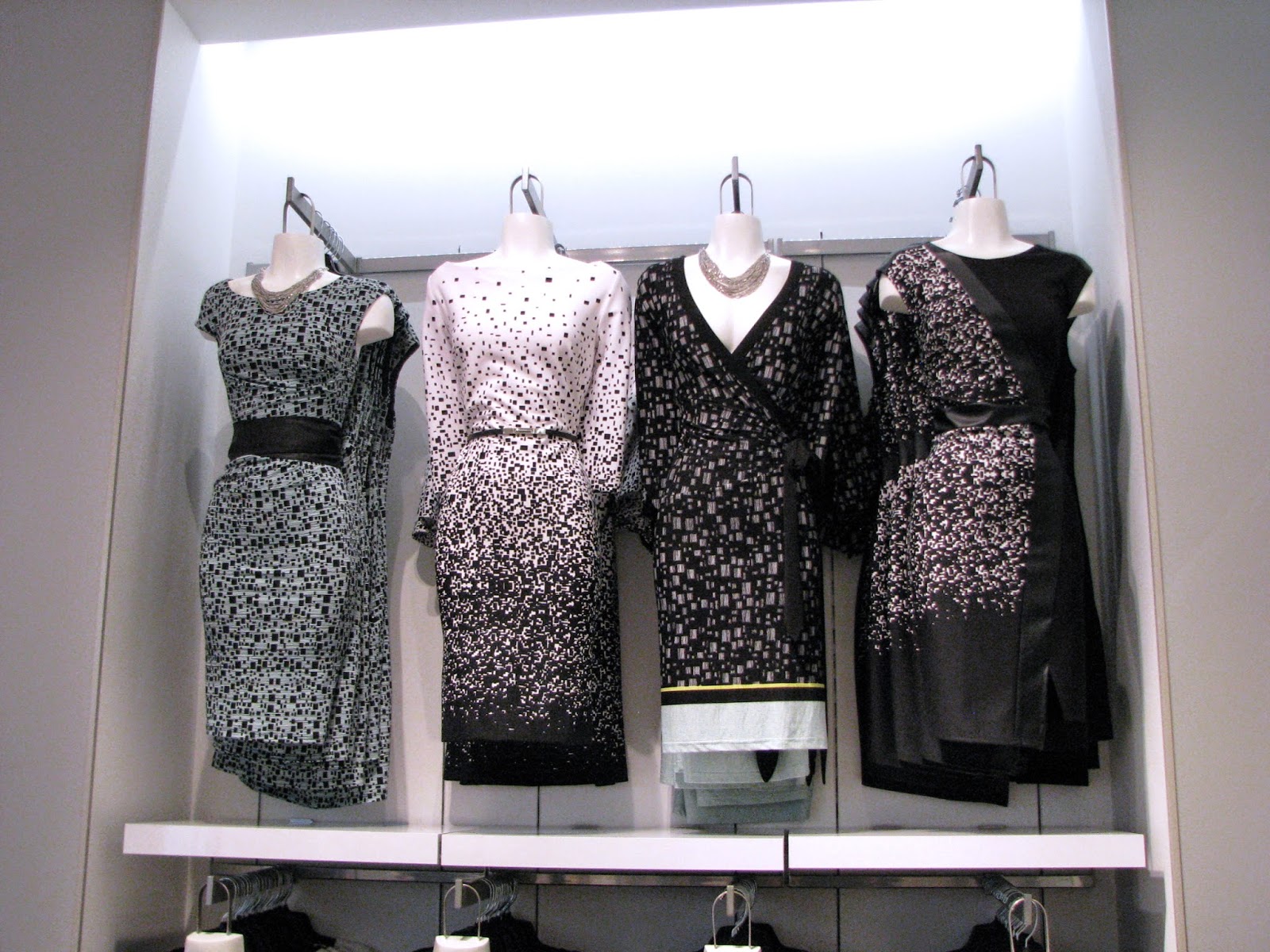 While there were lots of bright colours available, there were also items in classic monochrome. 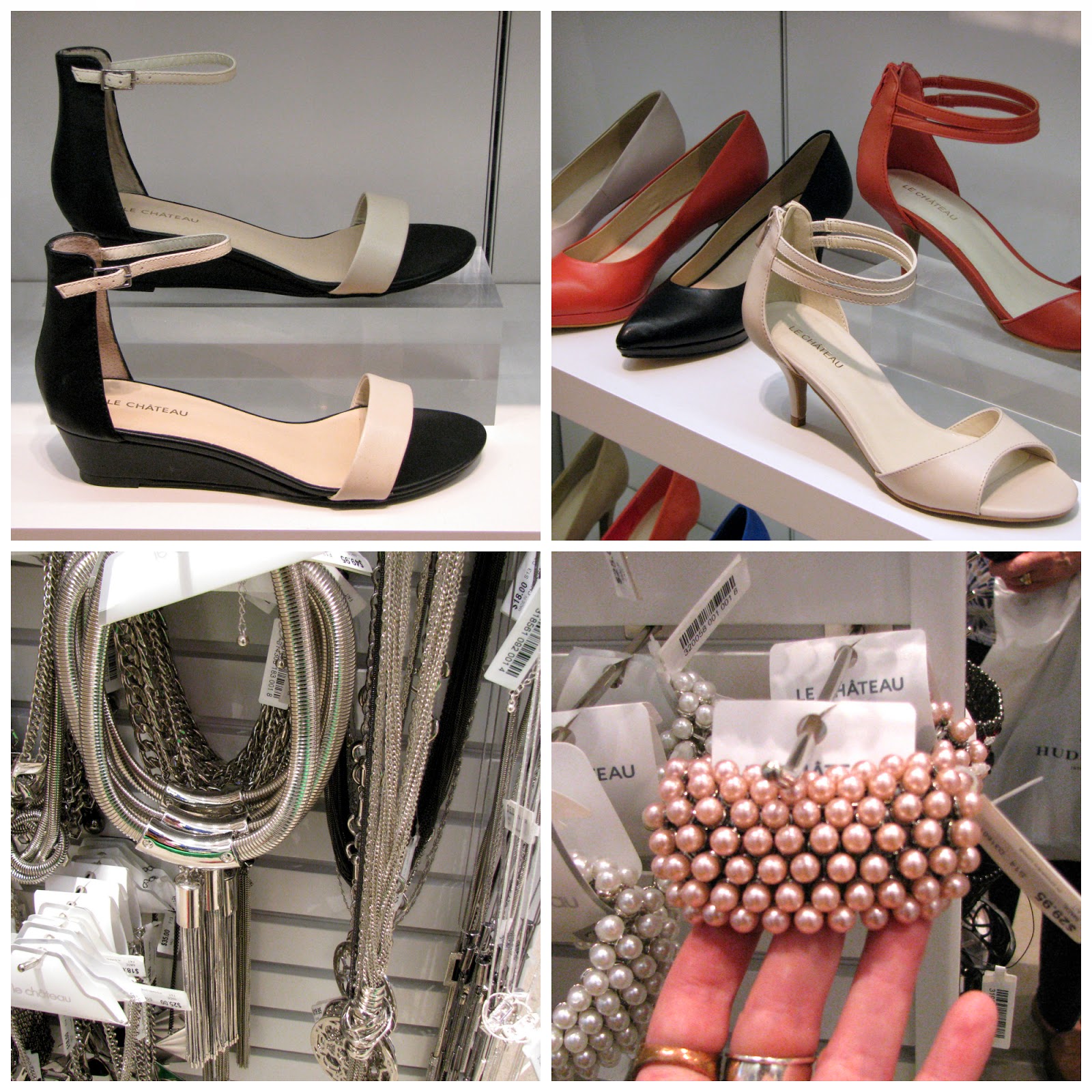 One of the things I remember fondly about the Le Chateau of my youth was the fabulous accessories.  Almost all the big and bold earrings worn in my 20's were purchased there.   I was happy to see they still carry a large assortment of bling, ranging in price from $10 to $50.  Their upscale shoe collection, which includes Italian and Brazilian designs, is displayed in streamlined, well-lit wall units. 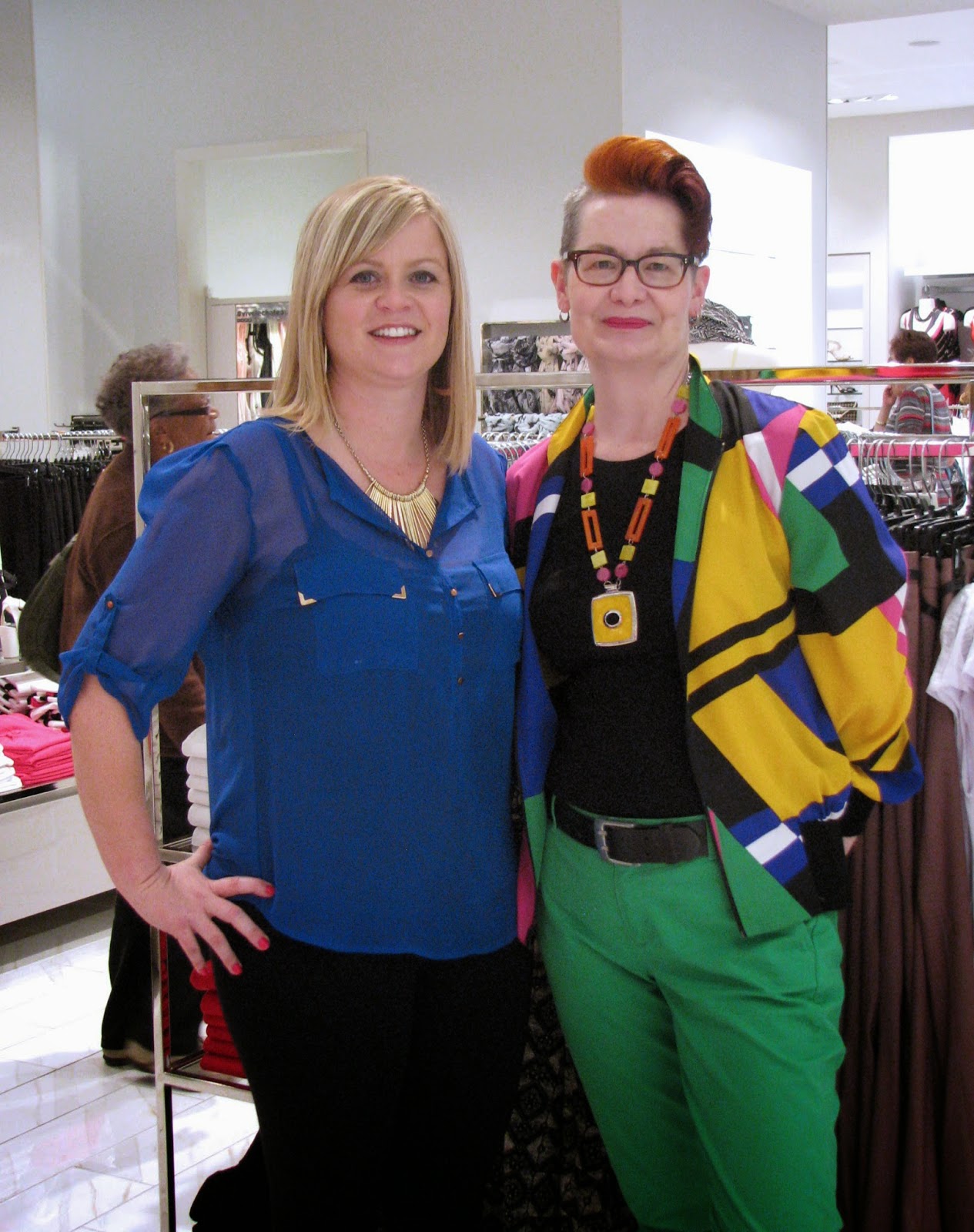 I ran into Kelly Connor, who blogs as City Mom, who had also been invited to the opening.  Kelly has been blogging for about 4 years and was one of the earliest followers of my blog. 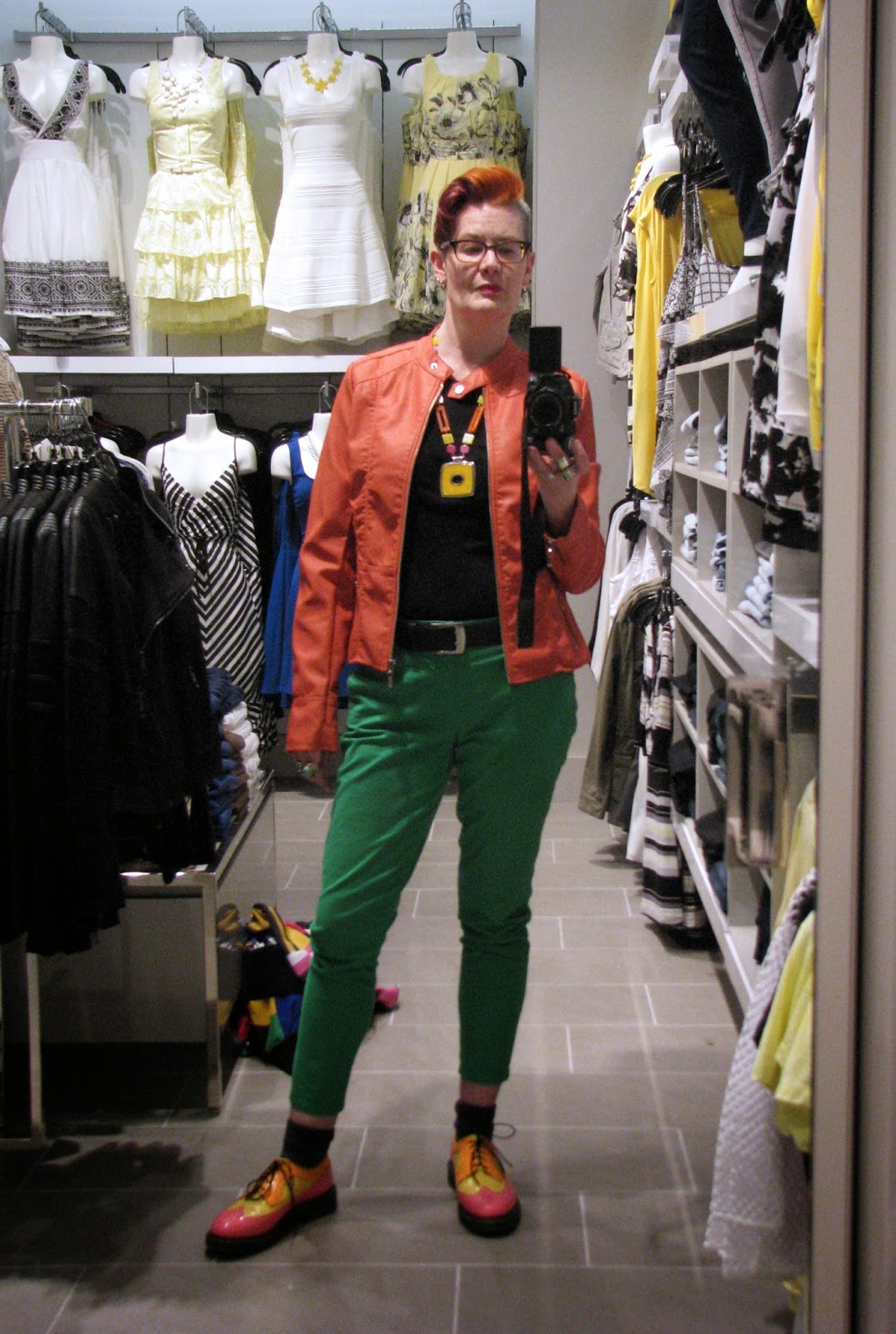 I had to try this orange faux-leather moto jacket as it coordinated perfectly with my shoes. 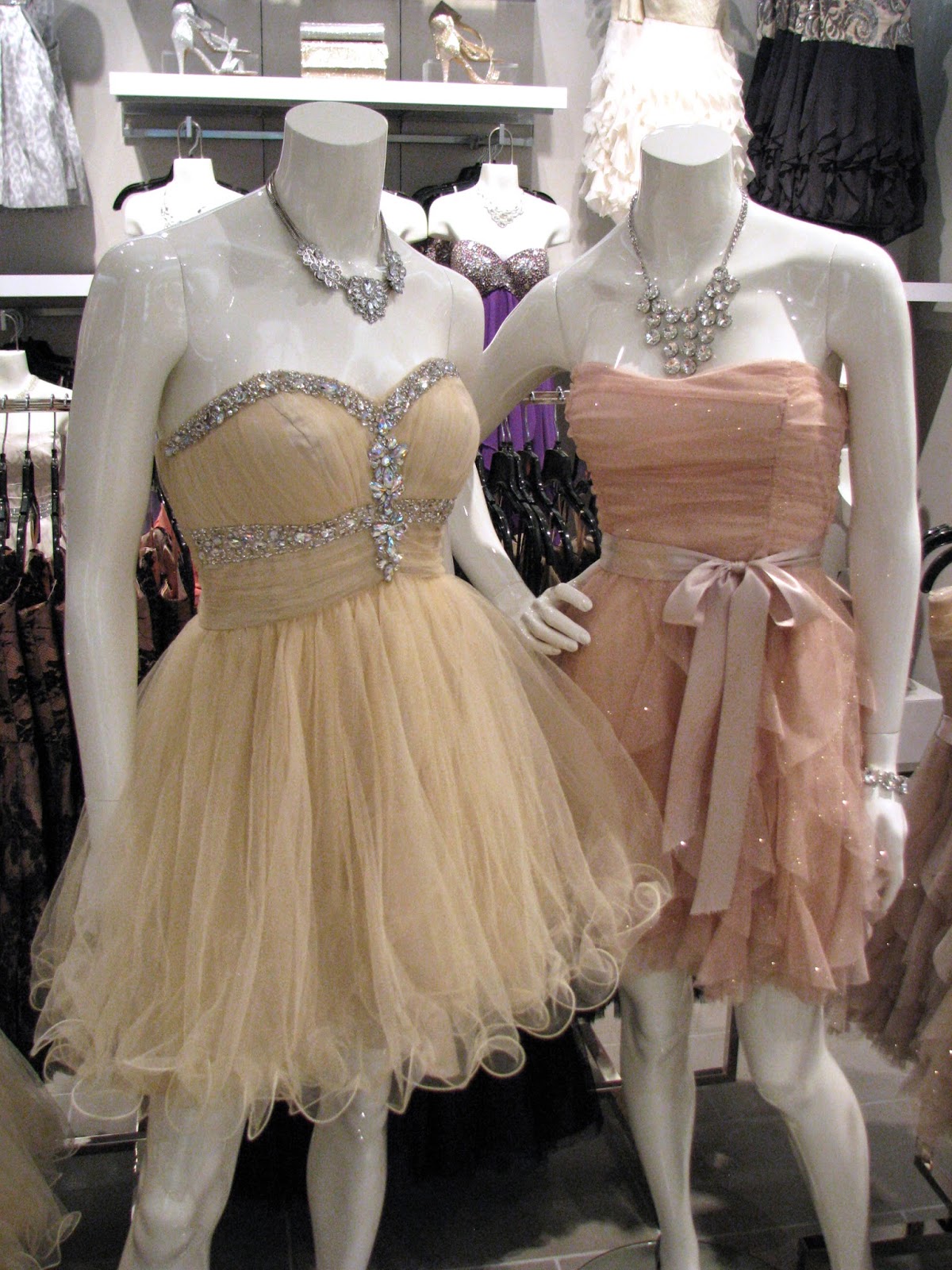 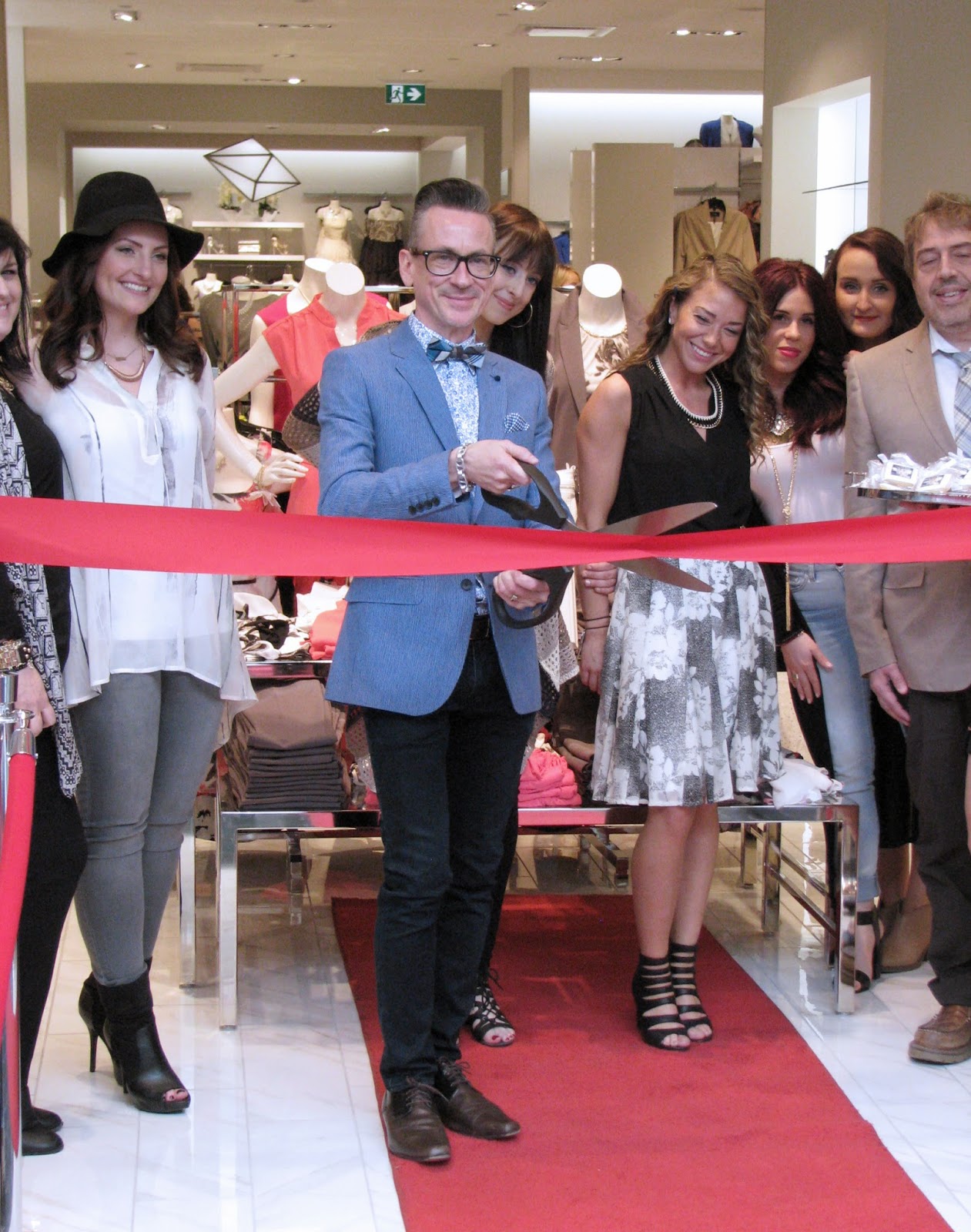 Mid-afternoon, Mr. Schmidt, with the assistance of the store staff, cut the red ribbon to officially open the store. 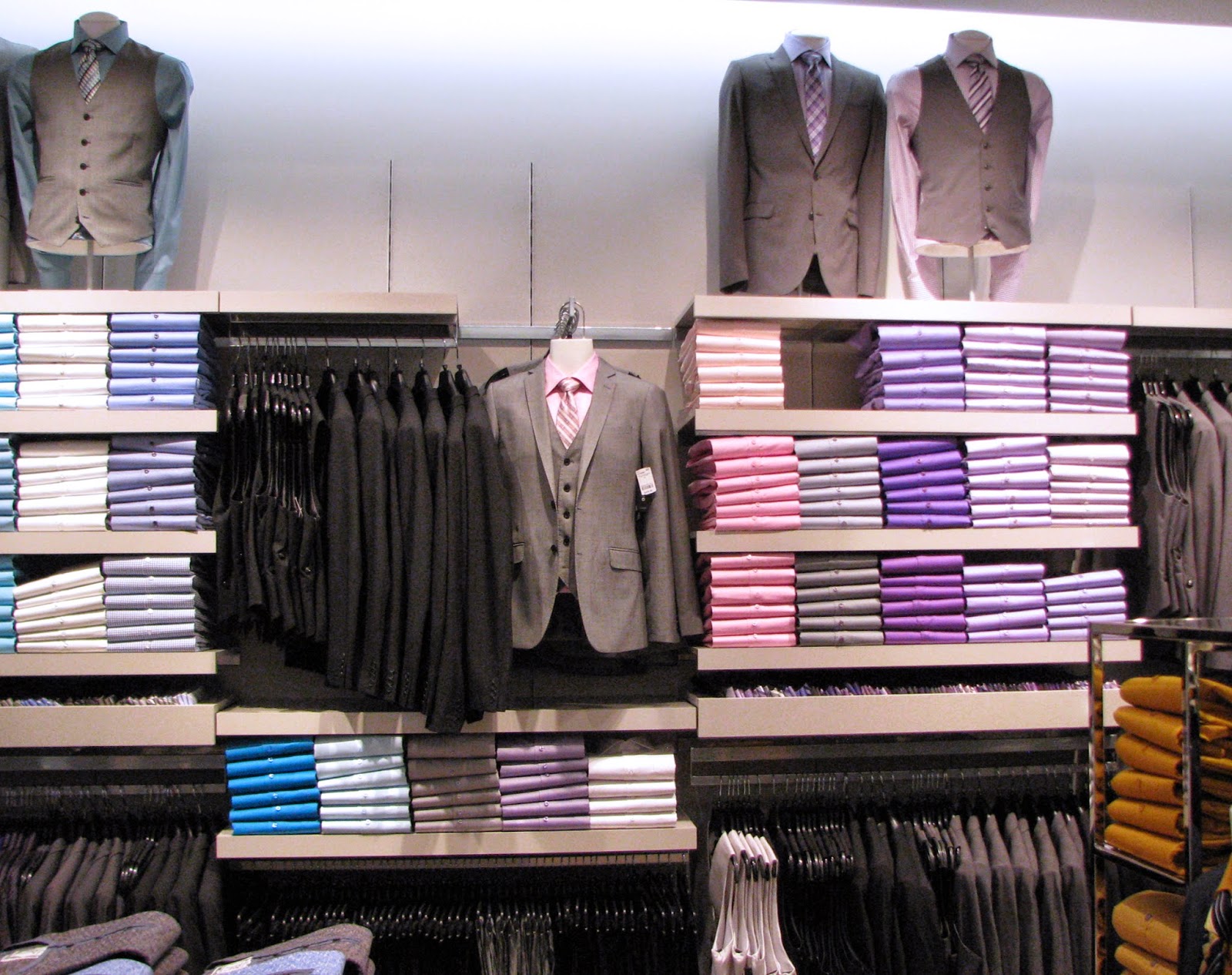 After paying for their purchases at the cash desk, customers can exit through the men's section of the store.  It was nice to see the all the colours available in men's dress shirts;  I'm all for men wearing bold colours. 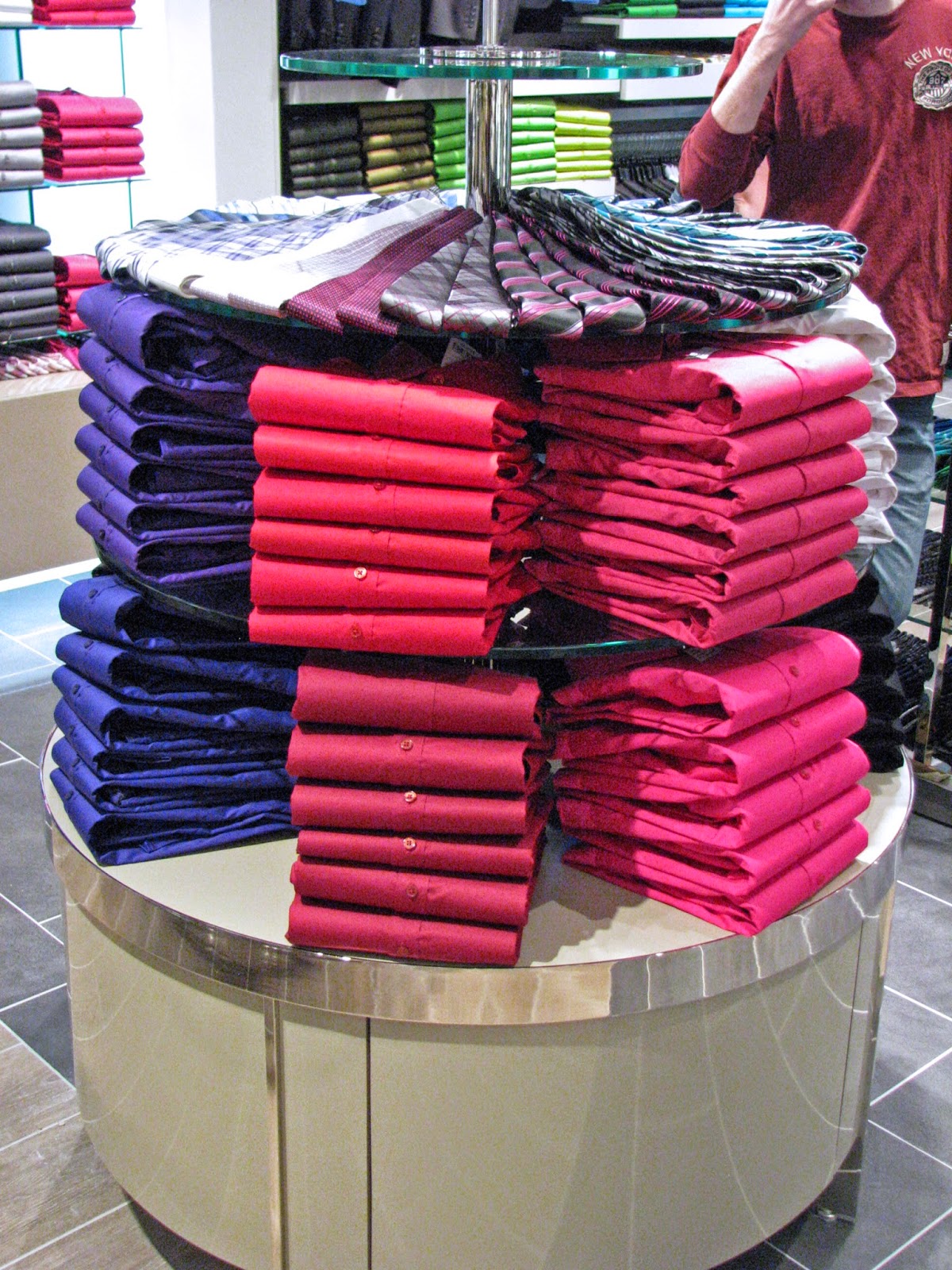 An unexpected bonus was the lesson I received in the science that goes into the design, and outfitting, of a retail space.  Mr. Schmidt explained that everything from the placement of the change rooms (scattered throughout the store instead of grouped in the back), lighting (environmentally friendly LED lighting), and the height of the display racks (low enough so the customer can see the entire item without asking for assistance) contributes to the visual appeal and financial success of a retail business.

In interest of full disclosure, I received a gift card from Le Chateau in return for my promotion of the store opening.  While I won't be making posts like these a regular part of my blog, I have to admit I rather enjoyed my brief visit to the land of retail.  It was good for me to step out of my comfort zone of thrift stores and small indie businesses and remind myself that the majority of women in Canada don't purchase their wardrobes in secondhand stores, and I learned a few things about the psychology of fashion merchandising.  Just because I don't like a particular item, or think it's too conservative for my taste, doesn't mean it's not attractive or flattering to other women.   Women who are looking for stylish, mid-priced clothing they can wear to the office, or to the park, will find something at Le Chateau, a company that, like their customers, is all grown up.
Posted by Forest City Fashionista at 9:37 PM