It's The Little Things

The birds have been noisier in the mornings, which have been dark since our switch to Daylight Savings Time last weekend.  However, that also means that it also stays light outside until at least 7 pm, which means I get to experience some daylight after I leave work.  I've been making a point of doing at least one thing each week to help me feel more positive and engaged with the world. 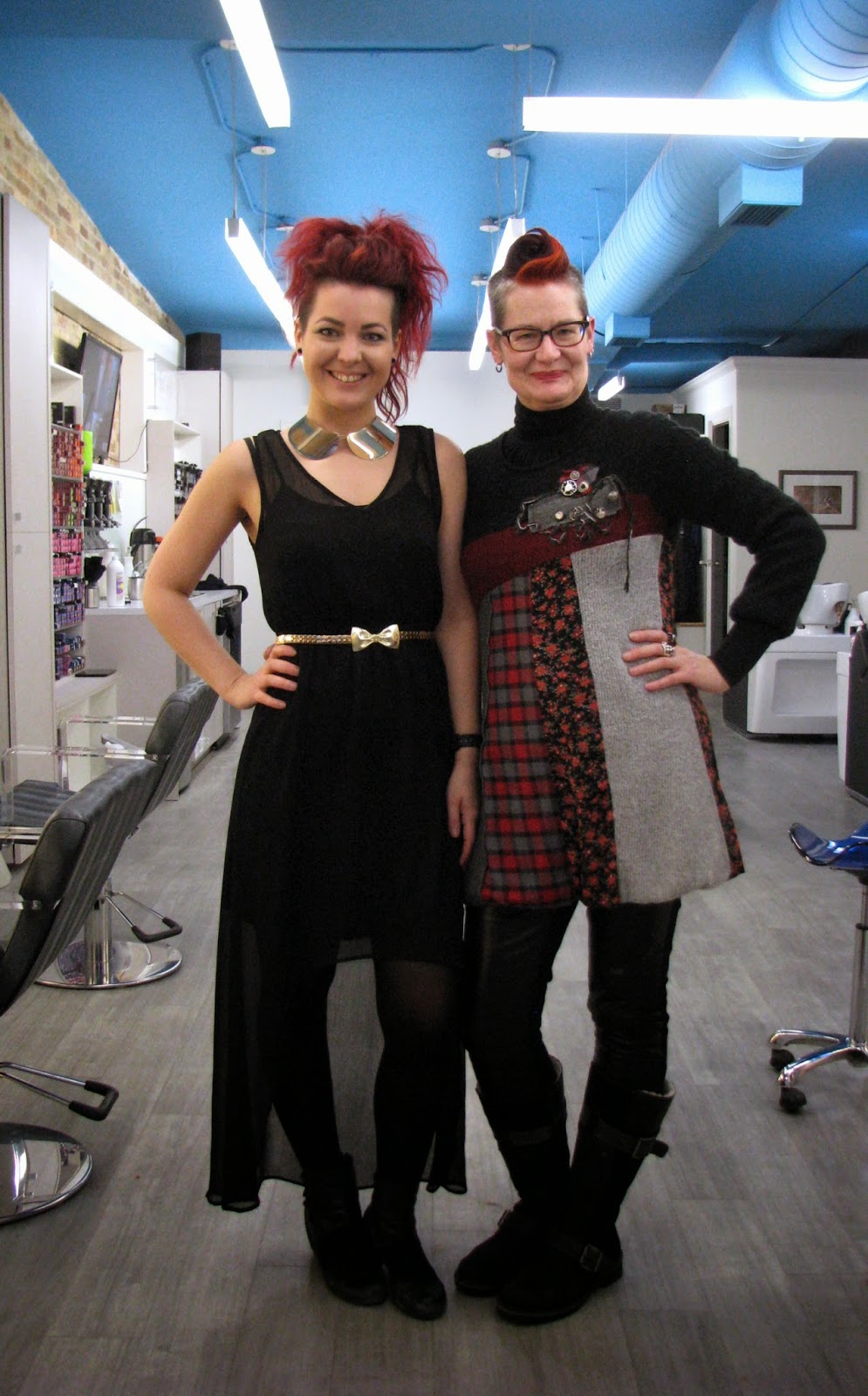 I had an appointment to get my hair coloured this week - a fresh 'do always makes me feel better.
Every time I see Melanie at Salon Cyan, she is wearing a great outfit and the day of my appointment was no exception.  She was all "glam" in black and gold metal and I made sure I got a photo of the two of us after she was done with my hair. 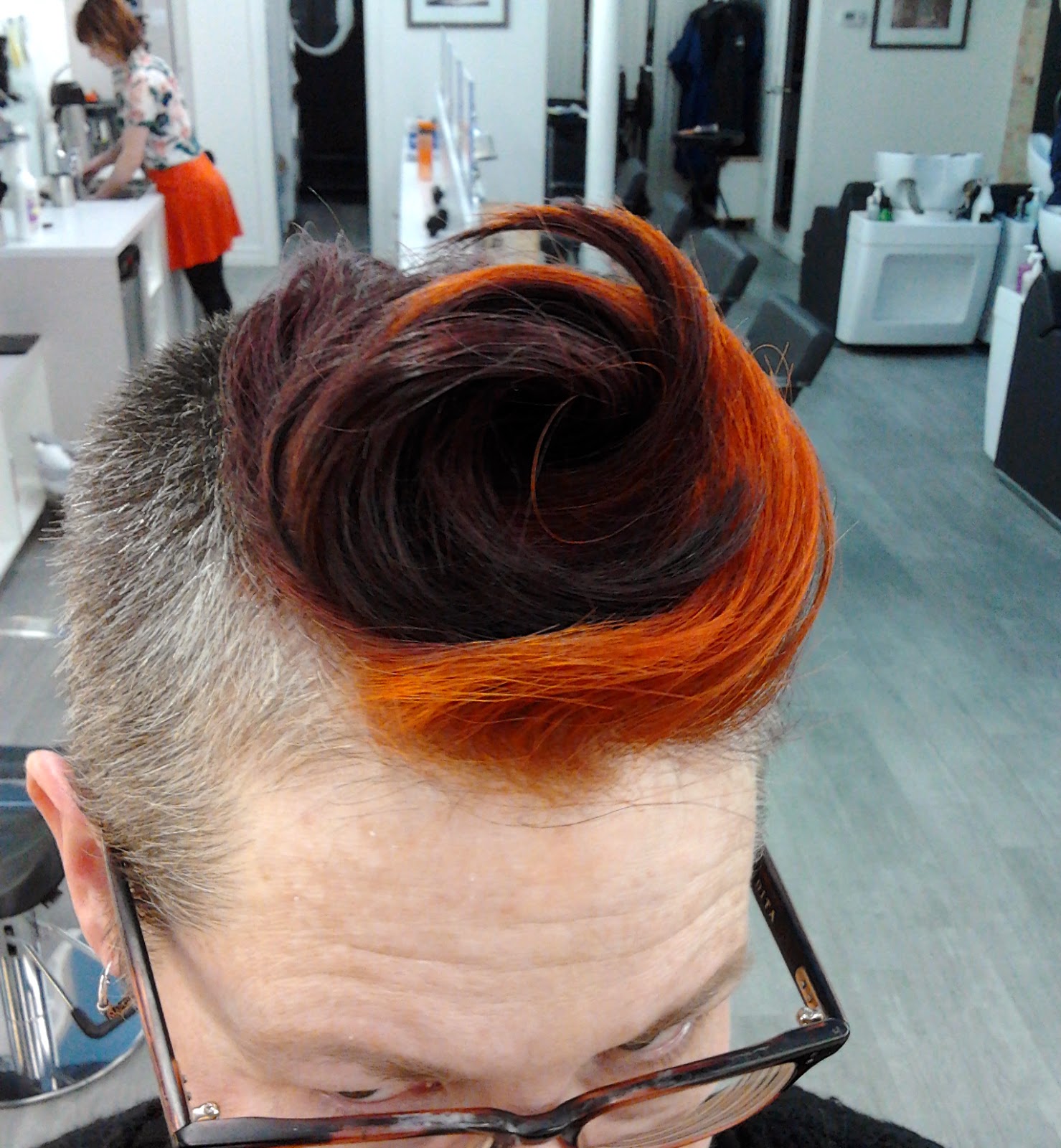 Melanie has a deft hand at making my long chunk of hair do all sorts of fun things, including this cool swirl, which lasted for about three days with only minimal upkeep.

Saturday means a trip to the Western Fair Farmers and Artisans Market to get coffee, and possibly a dog biscuit for Fred, jalepeno cheddar filler-free sausages from the Hungary Butcher, or maybe a mushroom and swiss cheese Scone from the London Edible Arts. 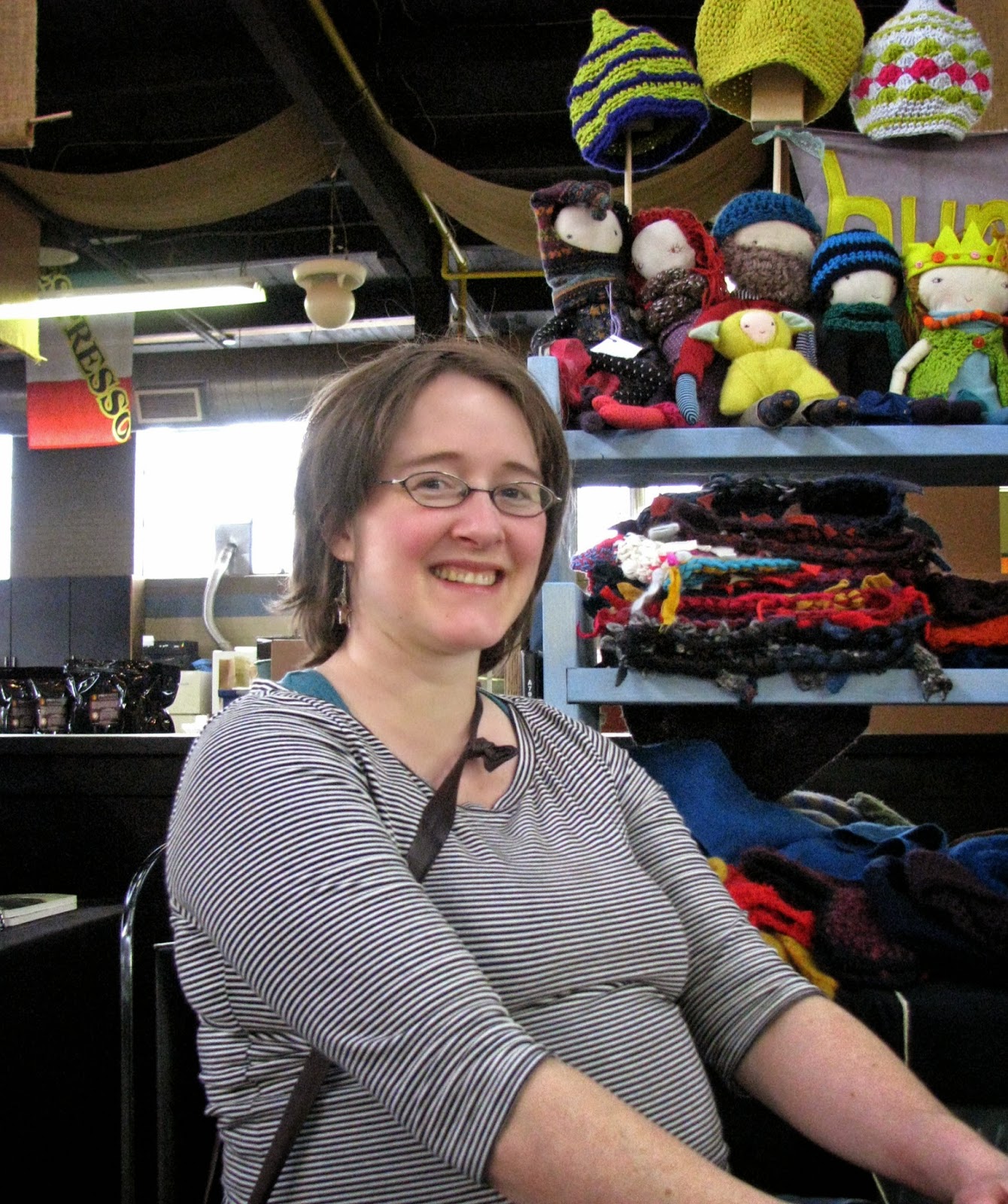 For the past several weeks, the trip has also included a visit with the delightful Anwen, in the photo above.  She makes the adorable dolls, hats, mittens and cowls that she sells under the name Humble Home.  Anwen, who lives up in my old stomping ground near Wingham, Ontario, is usually accompanied to the market by her husband and three daughters, who amuse themselves while she looks after her booth.  Soon she will have a new baby to occupy her so she won't be at the market after the end of March.  I encourage you to stop by and take a look at the wonderful, colourful, fantastical things she makes.  You can also see them on her etsy site.  After purchasing a couple of things from her,  I had asked if she could make me a couple of custom things, one being a doll inspired by the character of Myrtle from American Horror Story to whom I devoted a post here. 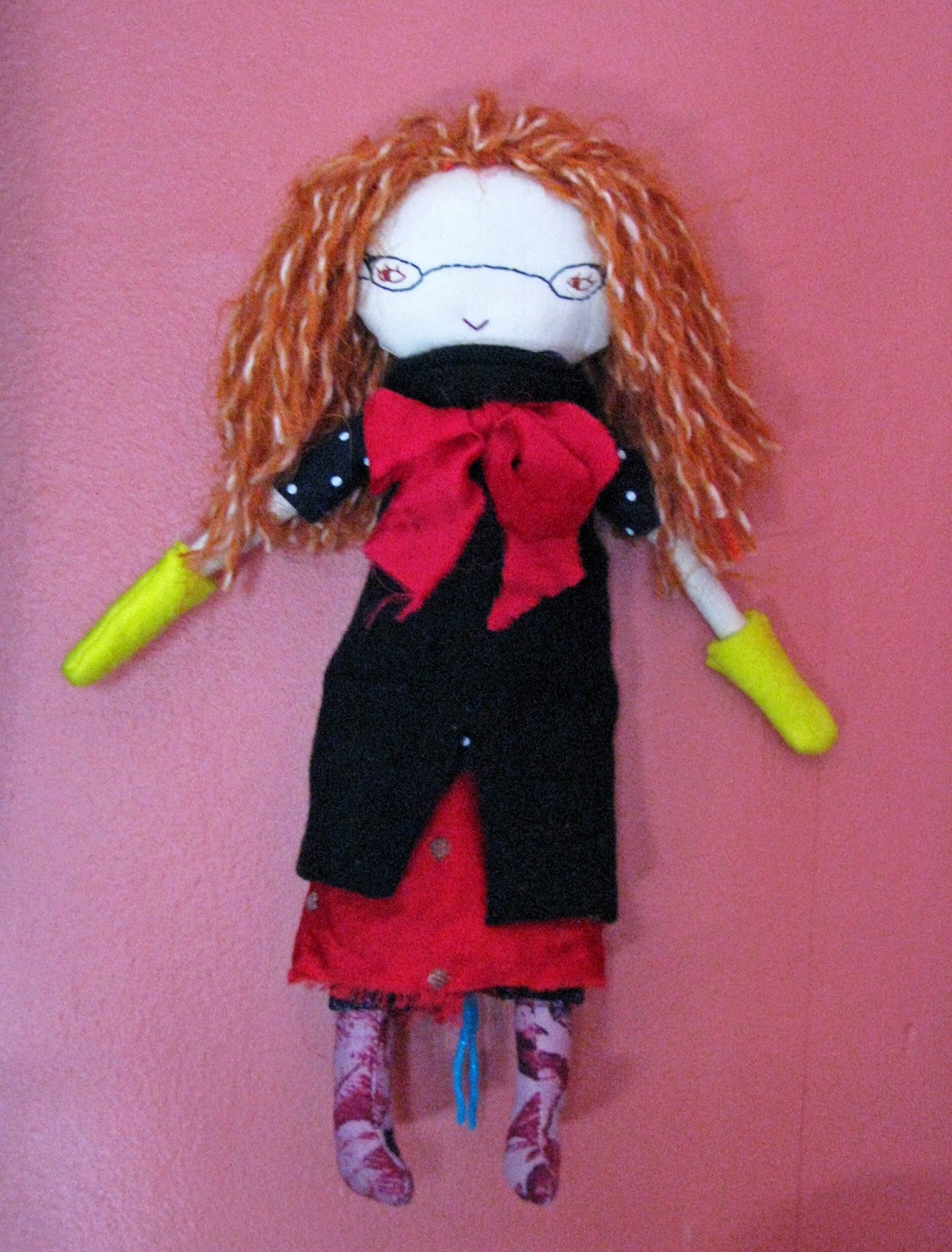 The result, shown above, is hanging on my wall above my desk.  She is wearing a super cool sparkly purple jumpsuit under her skirt, blouse and vest.

The sight and smell of all that food at the market left us ready for lunch...

I had heard good reports about a new Taco restaurant that opened downtown on Talbot Street, so I suggested to Heather that we give it our own taste test on Saturday.  Rock Au Taco is the latest brainchild of brothers Justin and Gregg Wolfe, owners of the Early Bird Diner, which is next door to Rock Au Taco.  The menu features only tacos, and the tacos they serve are as far from the Taco Bell version of tacos as can possibly be imagined.  The restaurant offers counter service (cash only), or you can order from the Taco menu while sitting next door at the Early Bird.  If you're thirsty, there are a number of tequila and whisky-based cocktails available to accompany the tacos. 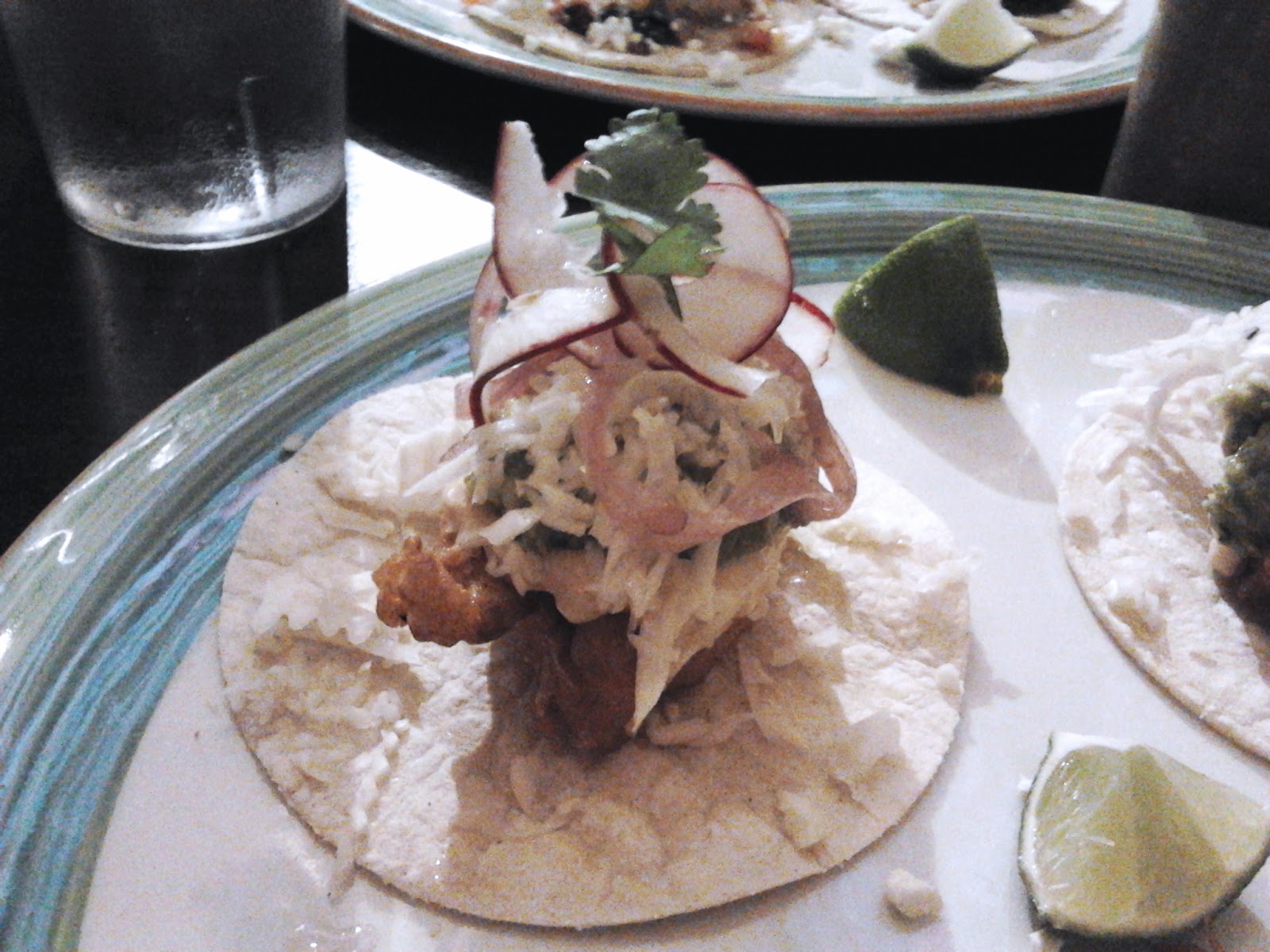 We decided to sit by the Tiki Bar at the Early Bird so we could pay by debit.  The first fish tacos I ever had were from a little food stand at the San Diego Zoo, of all places, and they were delicious.  I've been searching for a repeat fish taco experience since that time, with limited success.  The Pescado (fish) tacos at Rock Au Taco come pretty close, with crispy fish, slaw, radish, guacamole and a creamy sauce.  Other taco offerings include Cachete (beef cheek), Lengua (beef tongue), Panceta de Cerdo (pork belly), Papa (potato), and Rock Au Taco (bean).  I also tried the pork belly, which came with a mango and corn chutney and Heather tried the beef cheek.  Both were judged to be delicious.  The tacos are priced at $3 - $3.50 each and we found that three made for a satisfying light lunch.   The verdict?  Two thumbs up from the Forest City Fashionista and Derby Girl Torquemada. 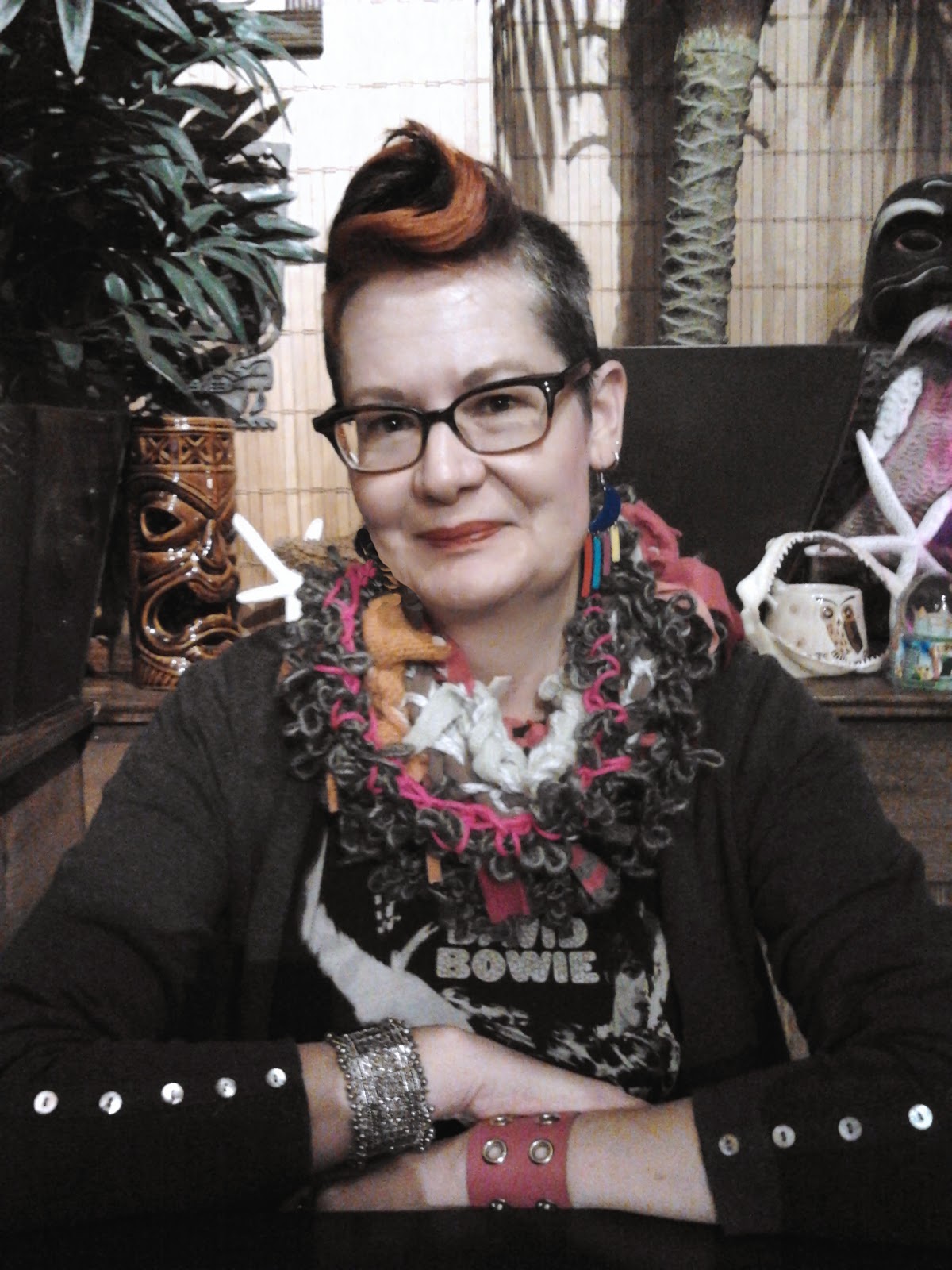 Patiently waiting for my tacos in my David Bowie t-shirt and funky collar that Anwen at Humble Home had made for me this week. 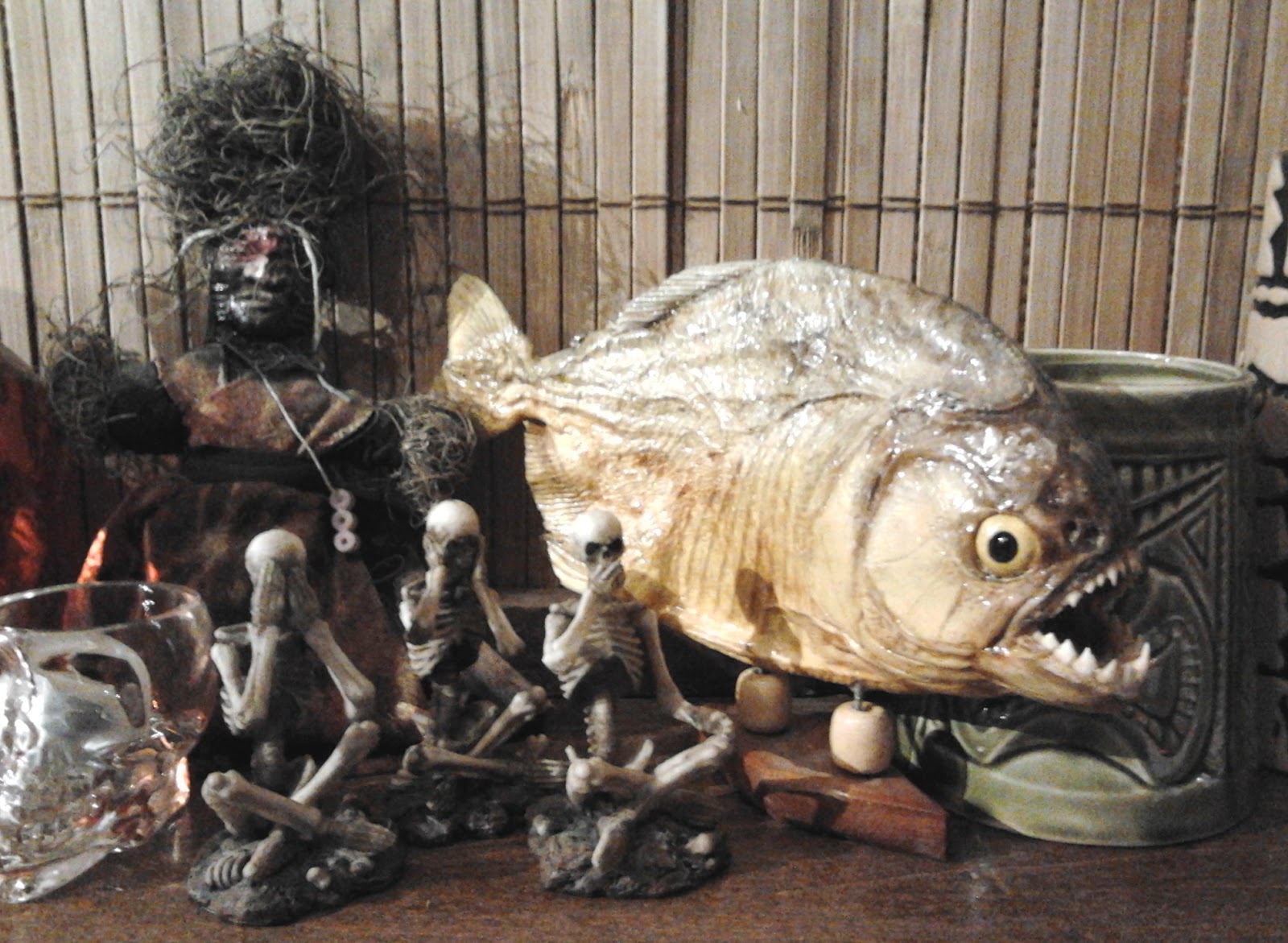 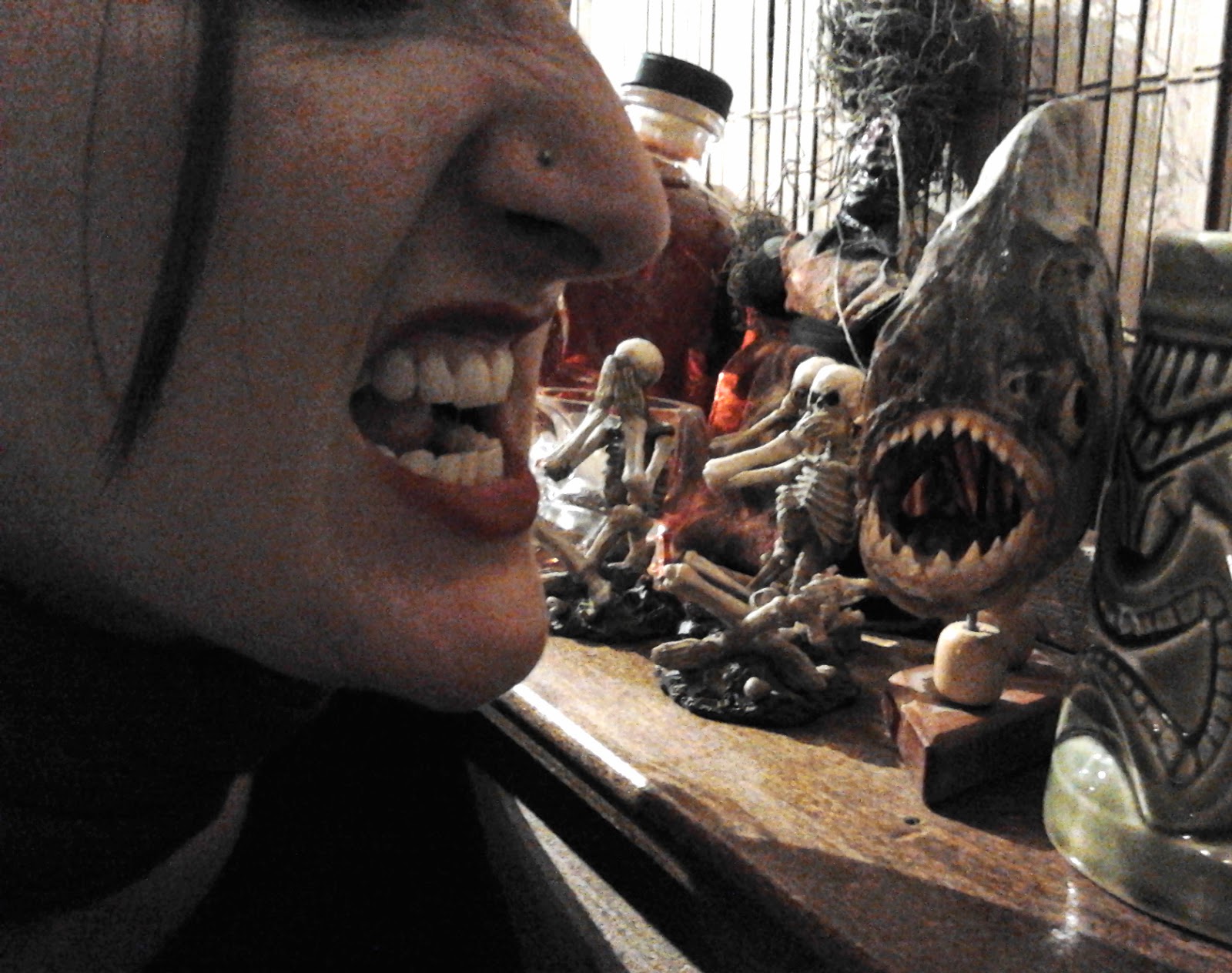 Derby Girl Vs. Piranha - perhaps this may be the inspiration for a new movie on the Space (SyFy) Channel.  After all, if Sharknado can be a hit....

We parted company to do our respective errands, and before I knew it, it was Saturday night, which doesn't have the same thrill it did when I was in my 20's and 30's.  Now it's an excuse to settle in and watch movies, and wonder how I got to be so old and boring.... 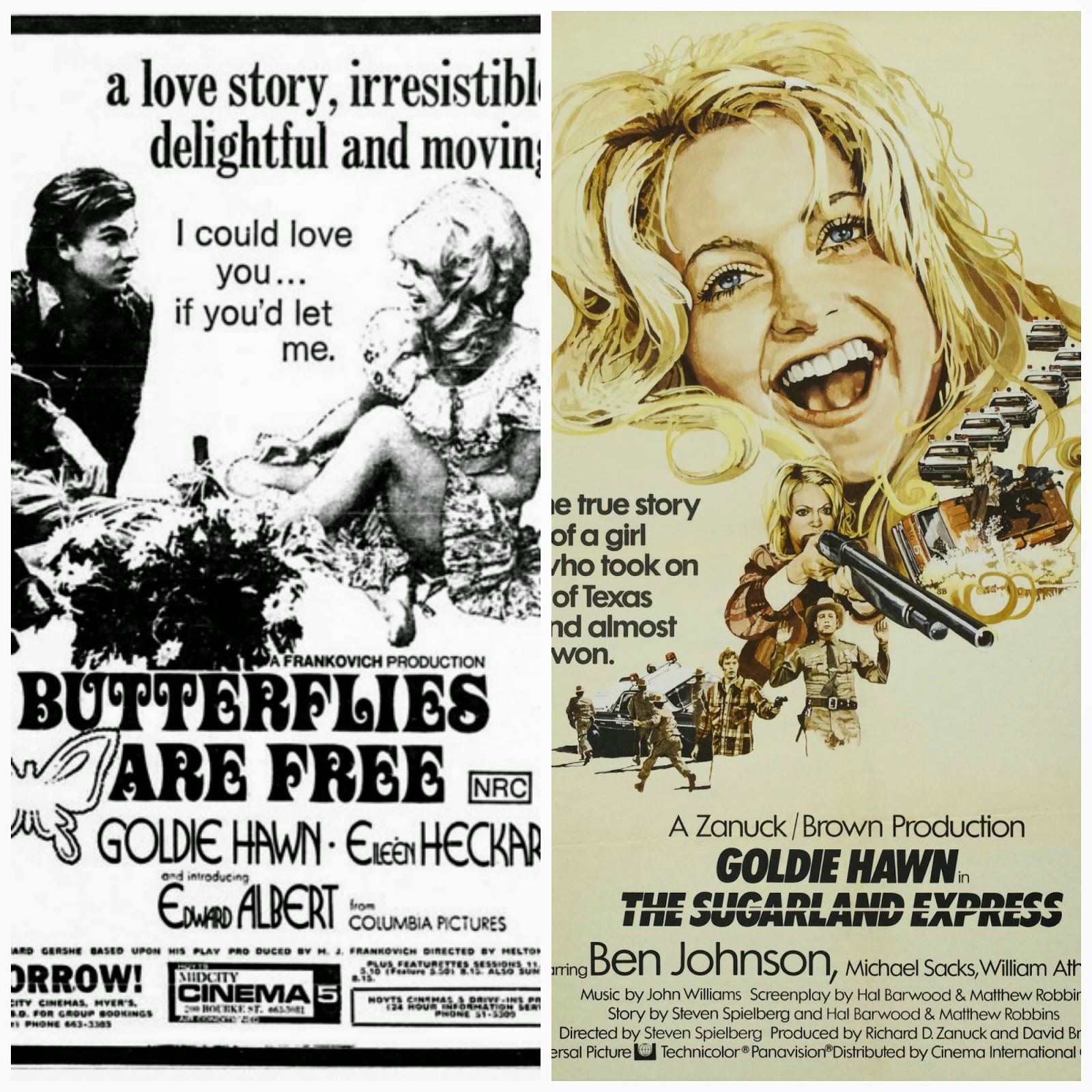 Turner Classic Movies was having a 1970's pre-plastic surgery Goldie Hawn film fest, and I indulged in a double bill of The Sugarland Express (Steven Spielberg's directing debut), which I had never seen, and Butterflies are Free, which I remember being quite taken with as a teenager.  Actually, I was probably more taken with star Edward Albert than the movie.  I almost got sucked into watching Shampoo, starring Warren Beatty as the sexy hairdresser George ("George?" Yeah, George is great...") but the fluffy-haired, tight-jeans-wearing Beatty never did much for me, and it was waaaay past my bedtime.

In the end, it's the little things that make life more than just a succession of days, make the hours spent at a job that leaves you more tired than inspired worth the effort, and can turn an otherwise dull day into an adventure.  A few more hours of daylight, lunch with a good friend, a new accessory or a fun hair colour, and a movie that brings back memories of a naive, teen-aged self - these are things to be experienced, enjoyed, and not taken for granted.

What are the little things that you enjoyed this weekend?
Posted by Forest City Fashionista at 8:43 PM