It was a sunny, mild afternoon here last Sunday, and I was feeling somewhat energetic and sociable, which had not been the case for the previous week.  I decided to go for a walk and take in the opening of the show of paintings by London artist Rosemary Sloot at Strand Fine Art, and I was very glad I did, as it is a great exhibit.   The show consists of 21 oil paintings and chalk pastel drawings that explore the narrative of her parents' experience as post-war immigrants who came to Canada from the Netherlands.  It is a visually stunning, emotionally engaging exhibit that was inspired by the revelation by Sloot's "strong, pragmatic" mother in her final year of life that her biggest regret was leaving their home in the Netherlands to come to Canada.   This revelation "felt like a bomb being dropped" to Sloot, who spoke for almost an hour prior to the opening reception. 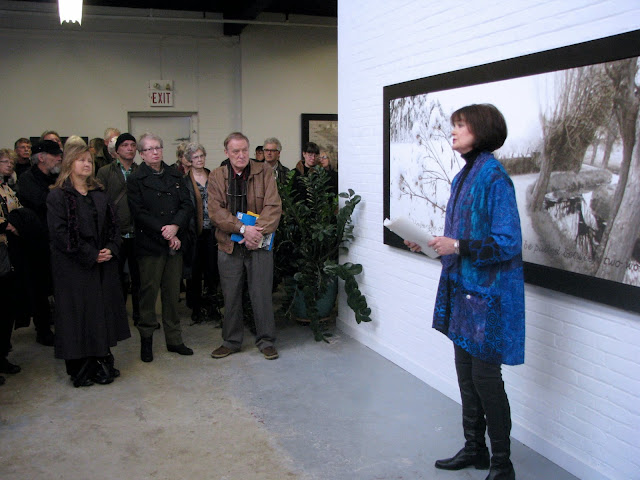 Sloot found that the process of creating the works in the show allowed her to view her mother's revelation as more of a gift than a bomb, and to make peace with her feelings about her parents' immigration experience.   Her parents were in their mid-30's when they boarded a ship destined for Canada in 1952.  They already had 4 children, and Sloot's mother was 7 months pregnant with their fifth, Rosemary.   Her mother was violently ill through the entire voyage, and as the men were not allowed to stay in the same quarters as the women during the voyage, it must have been a lonely, terrible experience for Sloot's mother.

The original source materials for the exhibit were black and white photos taken by her parents in the Netherlands and Canada, along with the few surviving documents related to their immigration, such as the ship's passenger list.  Sloot also incorporated text from the writings of other Dutch immigrants.  Images were enlarged using an overhead projector, and the only computer contribution was in the creation of some of the text.   The paintings are done in Sloot's meticulous, high-realism style, and incorporate the layering of images, and the blurring of certain objects to create a sense of the passage of time. 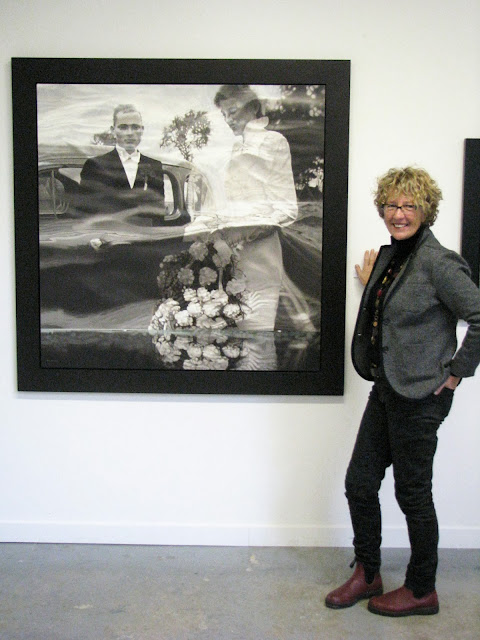 Vicki Easton McClung (I wrote about her October 2013 exhibit here), a fellow artist and friend of Sloot's, stands next to a painting titled "Halfweg, Holland" that shows Sloot's parents on their wedding day, merged with a dark body of water representing the ocean they would eventually cross because of the War.  It is the only reference to WWII that appears in the exhibit. 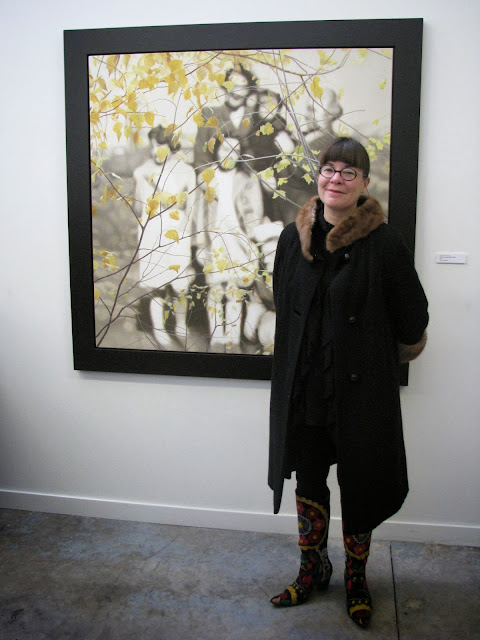 I had a lovely conversation with Holly, in the photo above and I asked if she would pose in front of my favourite painting in the show, titled, "Final Farewell, May 1952".  The painting shows Sloot's technique of layering a blurred image from a family photo with a sharp foreground, in this case,  young maple leaves that symbolize the country that will soon be their new home.  The faces are deliberately blurred in the paintings in order to move the images from the specific to the general.  The story she tells in this exhibit is specifically that of her parents, but it could be that of many Dutch immigrants. 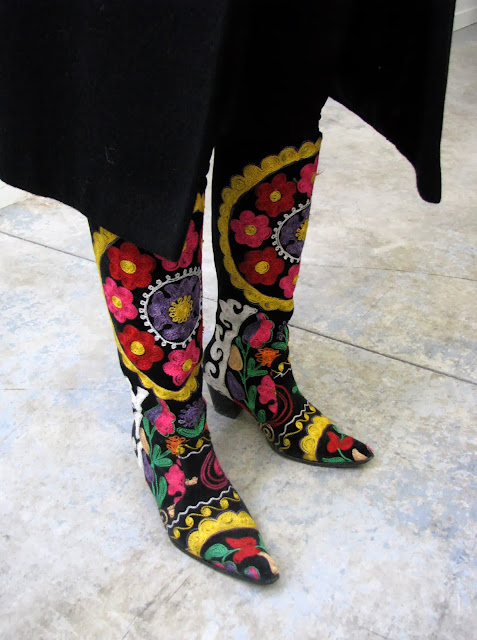 I originally approached Holly, in the photo above, to compliment her on her beautiful embroidered suede boots.  They were a gift from her husband, who purchased them in Turkey. 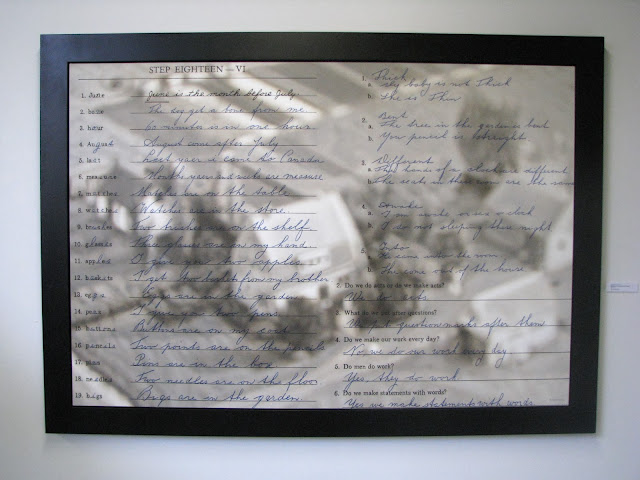 "Matters of the mind and heart" (above) layers a page from an English language workbook that had been completed by her mother, over an aerial photograph of her grandparents' farm and gardens in the Netherlands.  While her mother's mind was on her English lessons, her heart was back with her family in Holland. 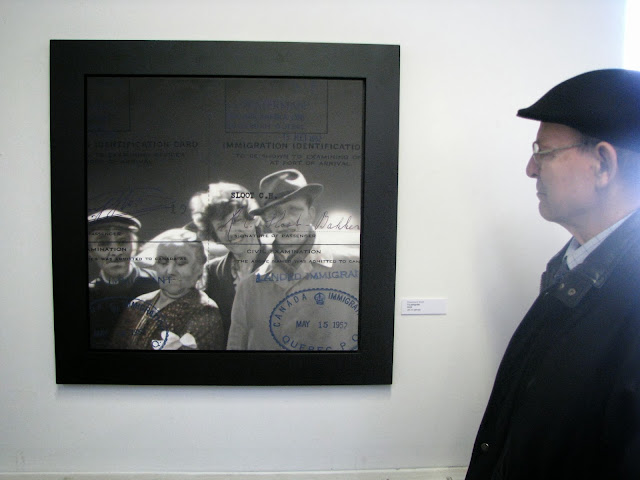 A visitor to the show examines the painting titled "To Emigrate" which layers a family photo with an immigration card. 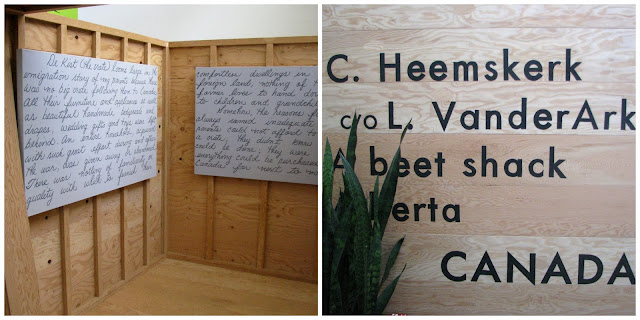 In addition to the oil paintings and chalk pastel drawings in the show,  Sloot has included a crate installation.   The crate (De Kist) played a very important role in the life of the immigrant, as it was the means by which their belongings travelled from their homeland to their new country.  The three exterior walls of the installation are printed with sample delivery addresses of Dutch immigrants, and inside are three panels filled with text.  The text describes how Sloot's parents didn't have a crate that followed them overseas; their furniture, appliances, toys, linens, etc. all remained behind. One of the reasons for this was the cost of shipping the crate to Canada. 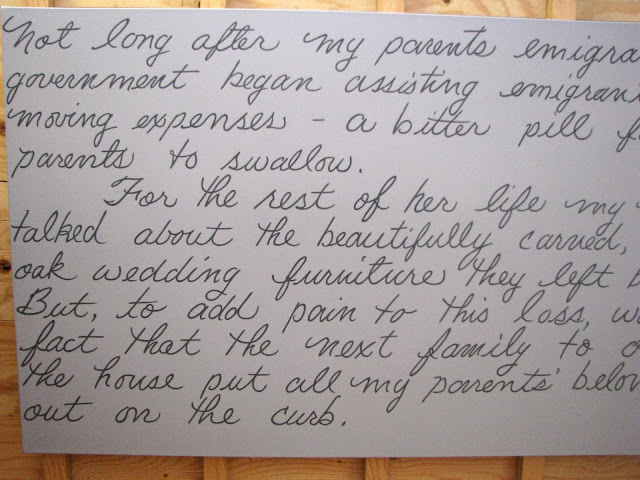 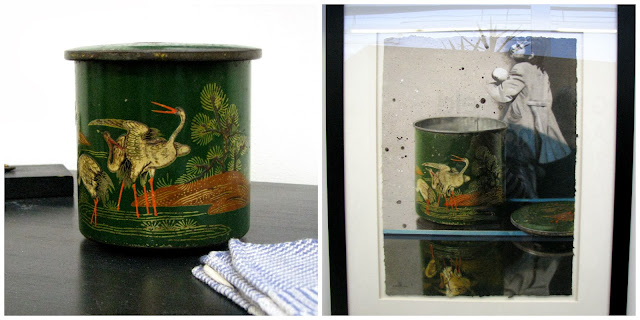 Sloot uses some of the meager kitchen objects that her parents managed to bring with them as subjects for smaller oil paintings on handmade paper.  The artist's meticulous painting skills are clearly demonstrated in these still life paintings, like the one incorporating the Indian Tea tin (above right).  The original tin is on the left. 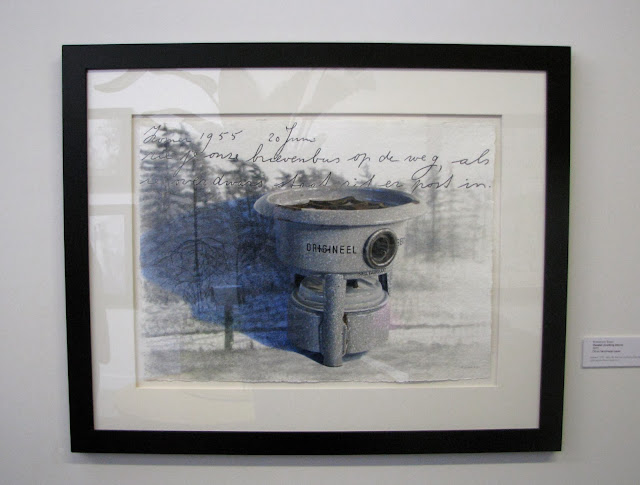 The subject of this painting, "Oliestel (Cooking Stove)", is the paraffin burner (Oliestel) that was found in the home of every Dutch family in the post-war era.  It was a necessary item that would have travelled with its owners to their new country, where there was no gas hookup. 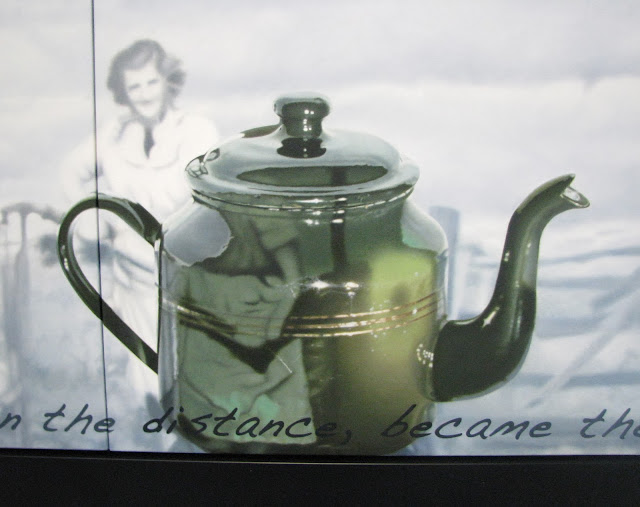 The teapot in this section of the larger work "Homesickness" looks like you could pick it up off the canvas. 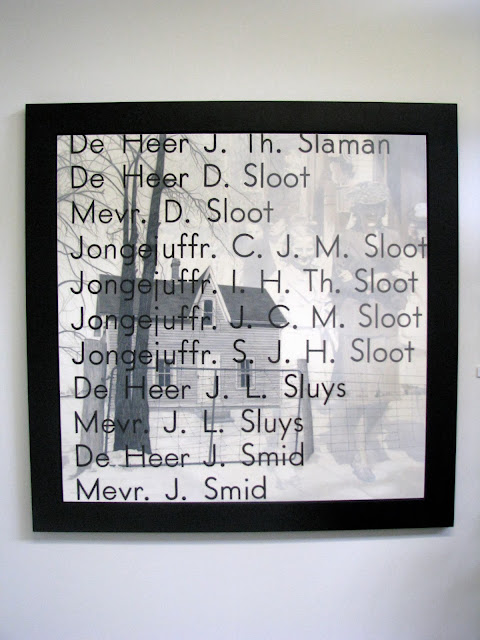 "What was given up, what was gained" layers three separate images to create a glimpse of a life left behind, including the unfurnished, unheated farmhouse that was to be the Sloot family's home in Canada, a photo of Rosemary's mother taken in Amsterdam, and part of the passenger list of the ship that brought them to Canada.

The viewer is left with a sense of the feelings of loss, desolation, and disorientation that was felt by Sloot's family, as well as by many other immigrants in similar circumstances.  Sloot noted that while her parents wanted to embrace their new life in Canada, they always felt like foreigners, and the feeling of being torn between two worlds, stayed with them the rest of their lives. 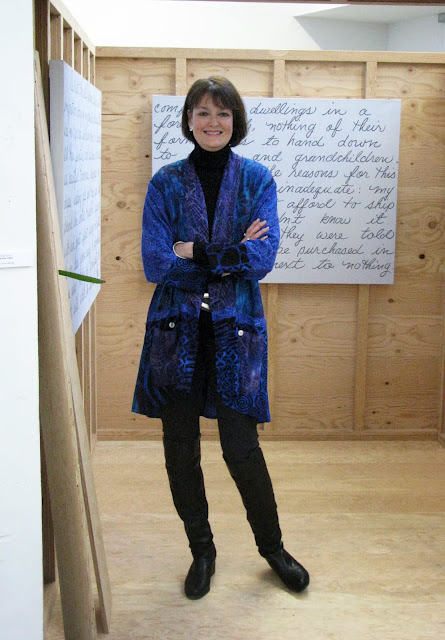 
I found the exhibit entertaining, thoughtful, and thought-provoking, but an interest in the subject matter isn't required to be able to enjoy the show. The paintings are technically brilliant, and beautiful to look at, but don't be surprised if you leave the show with a much greater understanding of the hardships and isolation faced by post-war immigrants.