Girl In The Bubble

So, apart from the deer - blogger meetup, I've so far not been very impressed with 2014.  Most likely this is because I've been either dragging my phlegm-filled carcass to work, or covered in Vicks VapoRub and rendered unconscious by Nyquil in bed.   I've heard it said that however you spend the first day of the New Year, that sets the tone for the rest of the year.  Let's hope that doesn't apply here.  On the up side, my faithful ingestion of Oil of Oregano has kept my cold from developing into bronchitis or pneumonia, which, until a few years ago, was pretty much the routine, AND, I have been able to lie on the couch and start watching Boardwalk Empire, which I have been hoping to do since the series started.

My friend Maureen Riley had a show of new work in early December.  I enjoy going to her shows because a) I like her women-focussed, jewel-toned, watercolours, and b) I get to hang with Maureen, who is one of the kindest, warmest people I know.  Also, her house is full of cool stuff... 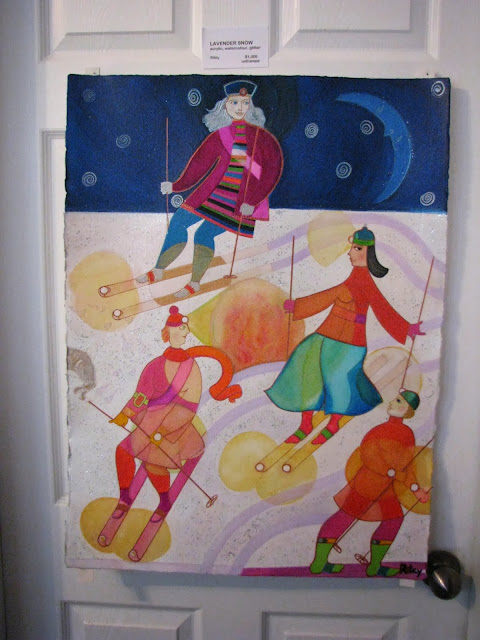 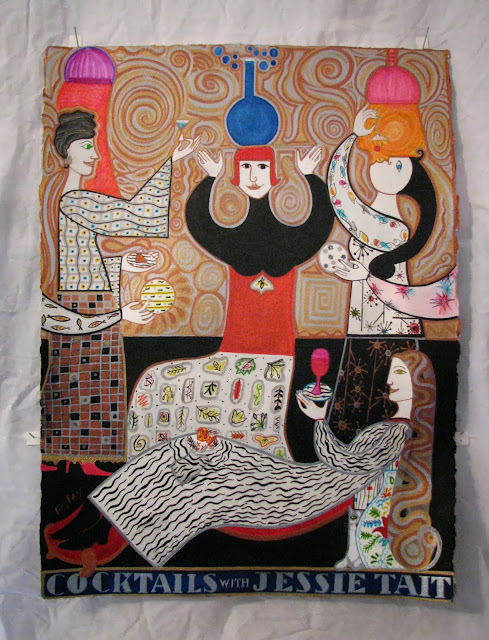 Jessie Tait, who died in 2010 at the age of 81, was a British ceramic artist and responsible for some of the most recognized and innovative ceramic designs in the 1950s.  As chief designer of Midwinter Pottery, she incorporated the best of 1950's cheerful, modernist abstract design into their pottery.  "Cocktails With Jessie Tait" is Riley's tribute to the artist, and incorporates patterns from her ceramic designs into the clothing of the women who are enjoying a bit of bubbly with the talented woman. 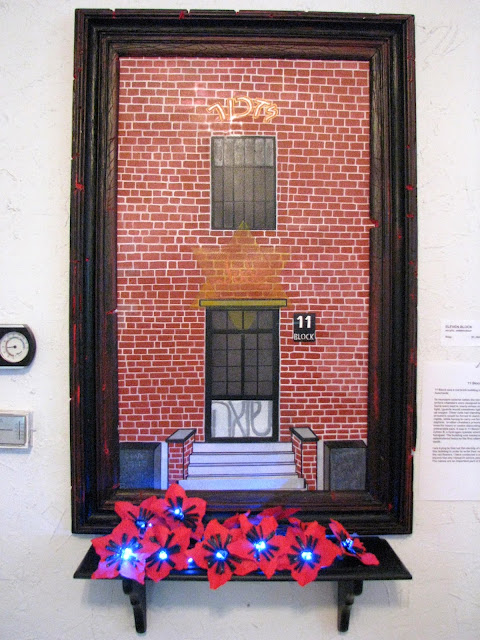 The majority of Riley's work has a joy and lightness about it so it was a surprise to see this work included in her most recent show.  She had been working on "Eleven Block" for the last two years.  The statement displayed next to the work explains that 11 Block was a red brick building in the camp of Auschwitz, that contained a variety of torture chambers designed to "punish" prisoners.  The Nazis first used Zyklon B, a hydrogen cyanide, in 11 Block.  The mundane exterior of the building gave no hint of the horrors that were contained within.  Riley has attempted to find out the names of some of the people who perished in the building so she can add them to the petals of the flowers on the shelf. 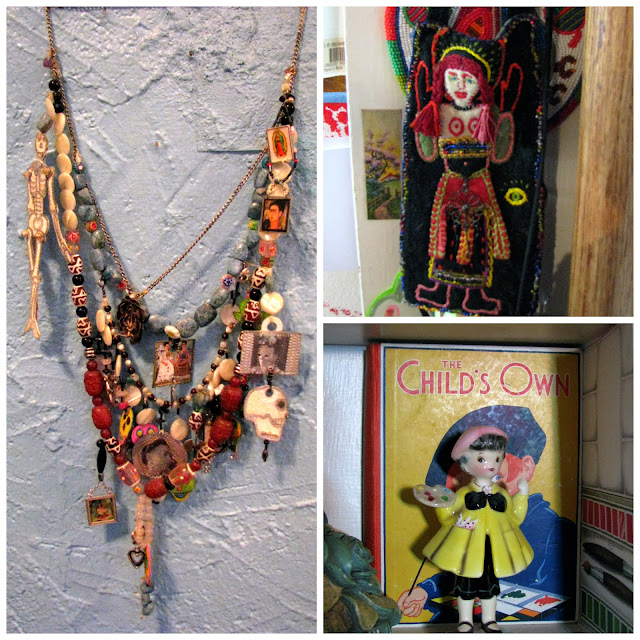 Everywhere you look in Maureen's house your eye lands on something wonderful.  I have coveted the Frida necklace since I saw it in her previous show  in 2012 at Strand Fine Art.

The London-based Country music band The Rizdales host an annual "Rizdales Country Christmas" at the local downtown watering hole, The Richmond Tavern, which has been operating as a bar and a hotel for the last 150 years.  The Rizdales, lead by husband and wife team Tom and Tara Dunphy, play covers of gems by George Jones, Waylon Jennings, Tammy Wynette, Hank Williams (Sr.) and Ernest Tubbs, as well as originals in the classic country style.  Each year I show my support by heading to the Richmond for some tunes, some snacks (free chips!) and a cocktail.   The crowd is always an interesting mix of the Richmond regulars, die hard country music fans, and folks like me, who may not be regular listeners of Country music, but can appreciate an afternoon of classic drinkin' and hurtin' tunes played with skill and enthusiasm. 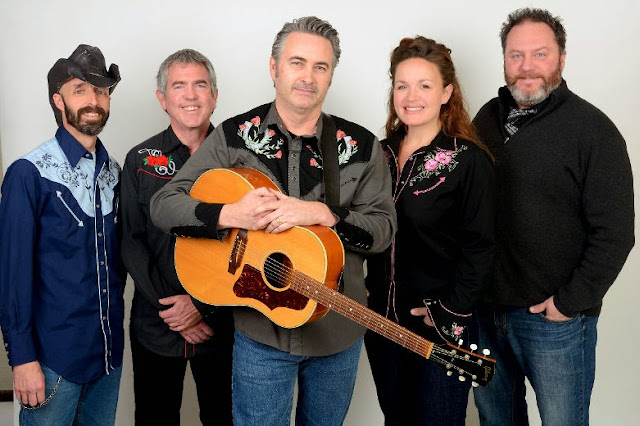 Photo of The Rizdales from The London Free Press website

Unfortunately, I left before The Rizdales played (they are always on last) so I thought I'd include a photo of them that I borrowed from the interweb.  From left - bassist Oscar Macedo, guitarist Blair Heddle, Tom Dunphy, Tara Dunphy, and drummer Steve Crew.
The Rizdales invite musicians from surrounding cities to join in, and this year it was Hamilton's Ginger St. James, and Toronto's Big Tobacco and The Pickers. 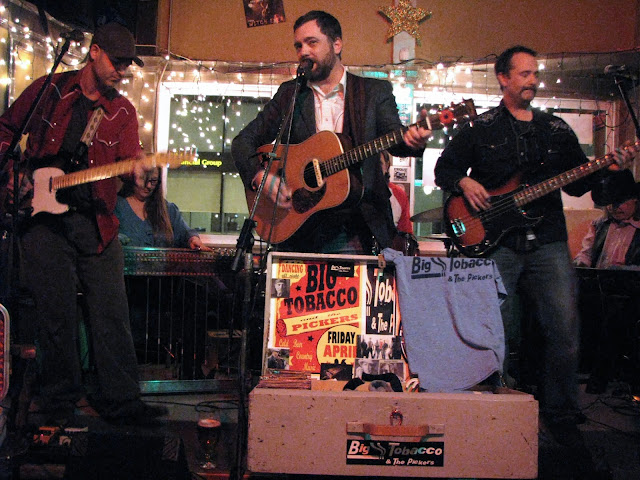 Big Tobacco and The Pickers 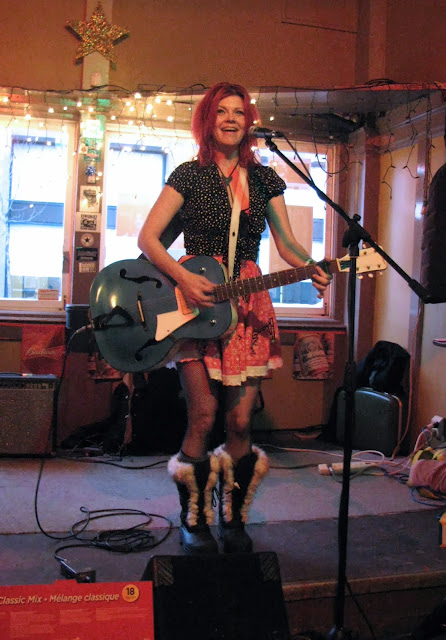 Hamilton's Ginger St. James, whose rockabilly-edged style and charm won over the audience 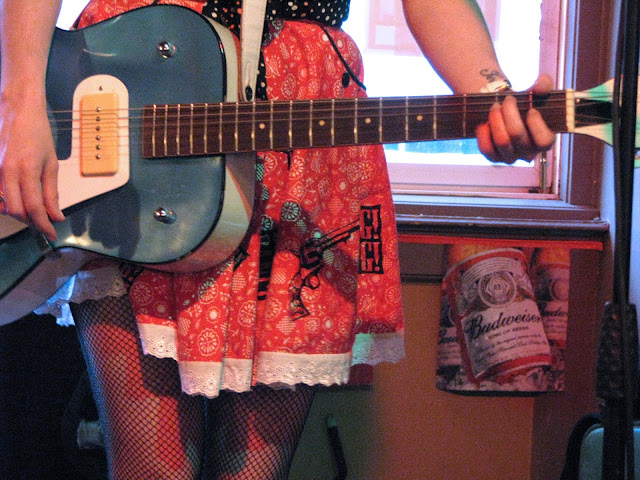 This is the second time I've seen St. James perform and both times she was wearing a gun print skirt

There was a good outfit or two... 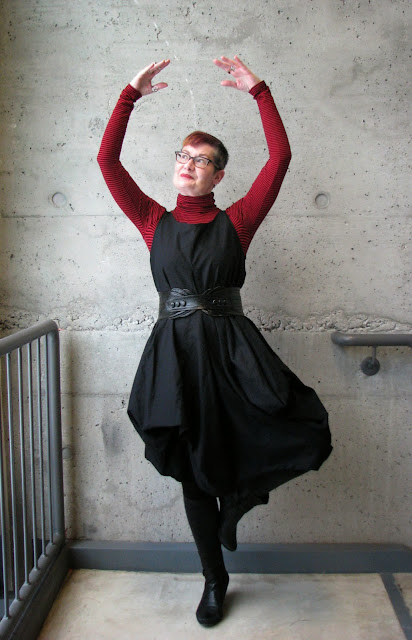 Me, back when I was healthy and had a sense of humour, attempting some ballet moves in my birthday-present-to-myself dress from From Mars.  Yeah, it's black, and pretty simple, but the poufy skirt won me over. 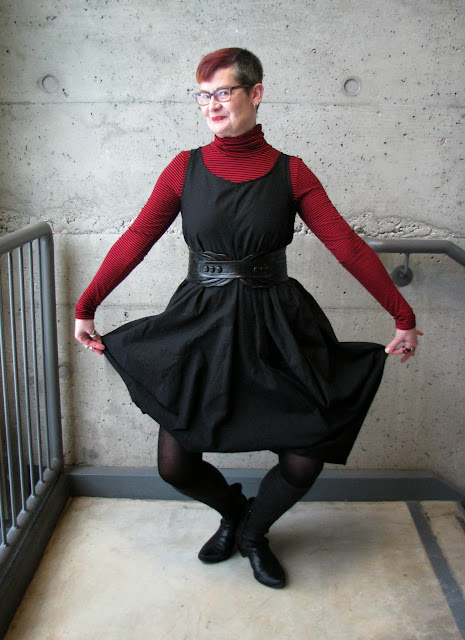 My best curtseying days are behind me 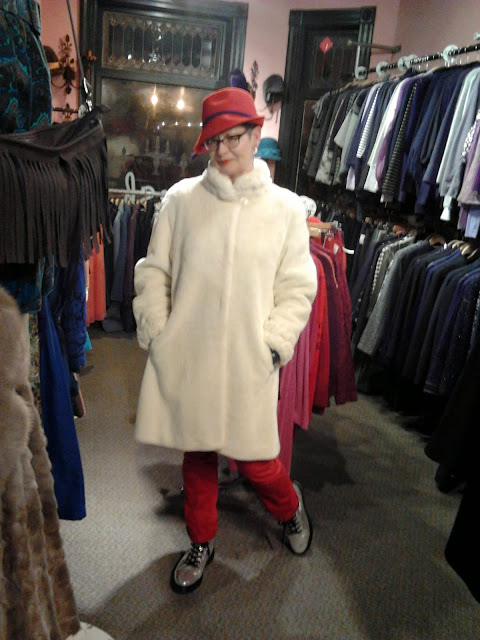 Looking pretty chuffed in my new-to-me faux fur coat I got at Mesh Boutique, which looked pretty spiffy with the red hat and pants ( both from The Sentimentalist), I was wearing when I bought it.   I was obviously taken over by a moment of insanity, because even though the coat fit perfectly, was an amazing price, and is super soft,  IT'S WHITE for frack sake, and I am NOT the person who should be wearing a white coat.  Does anyone know if you can safely use Scotchgard on a faux fur coat?? I'd be concerned about it affecting the colour and the texture of the fur. 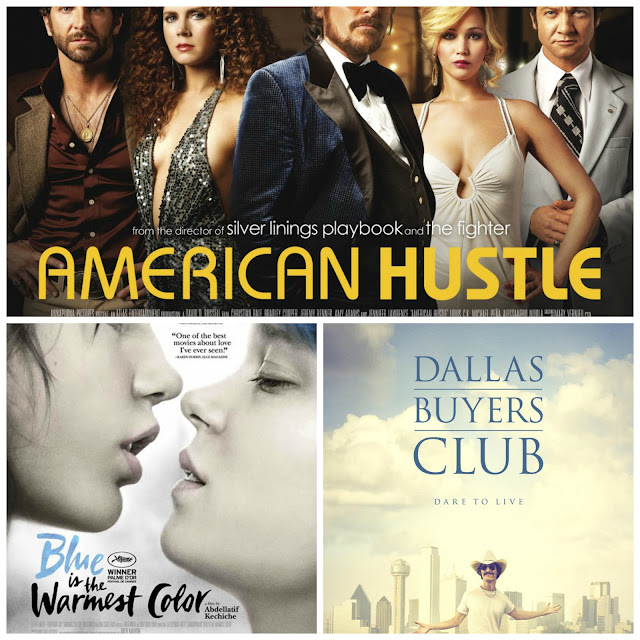 And hung out with The Bun.. 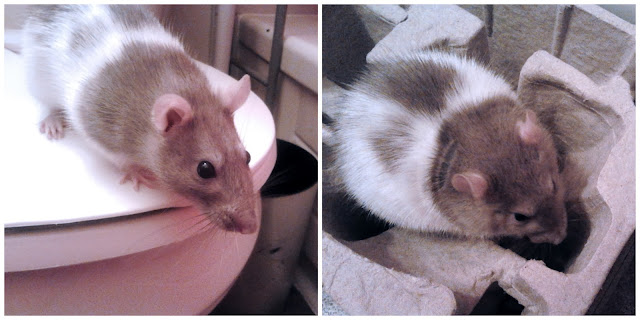 who is now a year old - (omg, they grew up so fast!) and has not been happy about having her routine disrupted just because I'm sick.

So yeah, December was good, and in fact, so was most of 2013.  I'm sure that once I'm feeling better, my attitude will improve as well.   As usual, I did not make any New Year's resolutions, but I was asked by Readers.Com to be part of a blogger panel and offer my opinion on the idea of New Year's Resolutions as a whole.  You can read what I had to say in the three part series here.
Here's to a happy and healthy 2014, and a big squishy hug (from before I was contagious) to the friends (here and far) and readers who inspire me to keep sharing stories, taking photos, dressing up, and being the best me I can be.
Posted by Forest City Fashionista at 5:44 PM